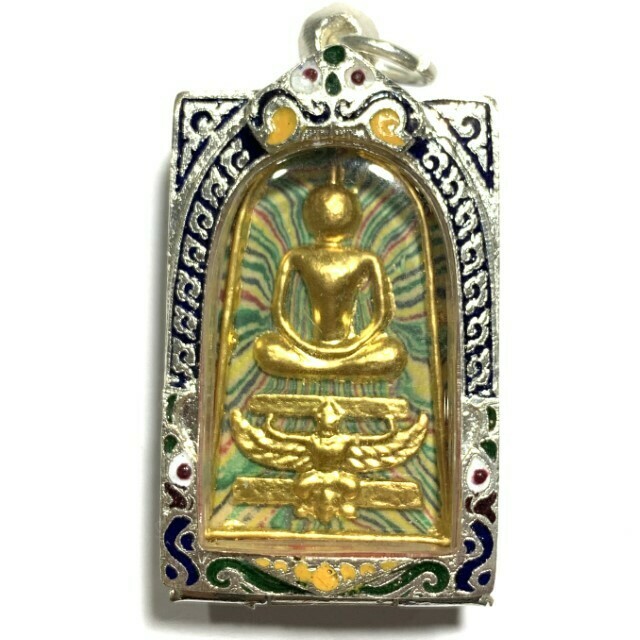 A pristine example of the Pra Somdej Luang Por Pae, Wat Pikul Tong with Silver Casing, this exhibit being a Pim Thaan Krut (Garuda Dais) with 2 Takrut inserted into the base of the amulet in rainbow powders with gold leaf images. Made in the Year 2542 BE in the Metta 94 Luang Por Pae edition. This exhibit is in unused condition and still in the original box from the temple, making it an extremely attractive Masterpiece amulet. 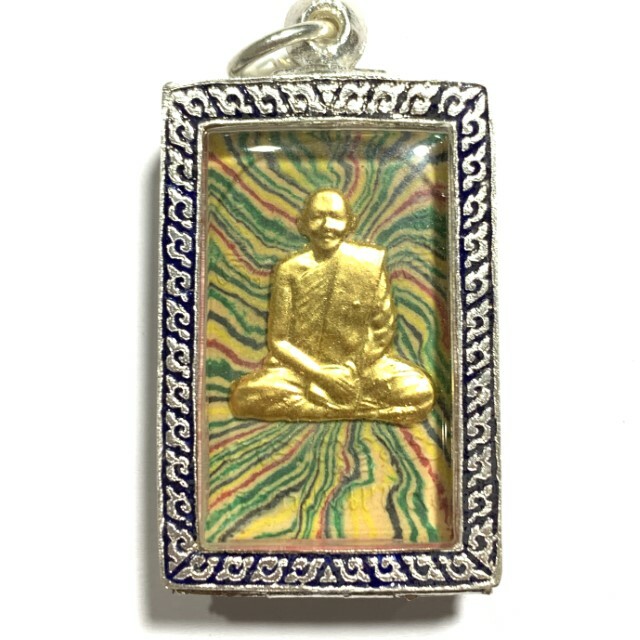 Below; 2 Takrut are inserted into the base of the amulet 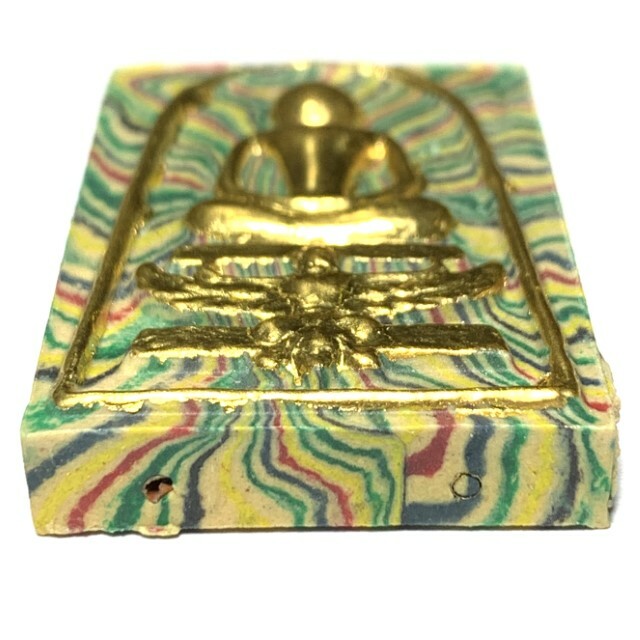 The amulet was made in various versions, all of which, just like most Pim from this master, are now becoming extremely difficult to find many remaining examples. Most editions which were made and blessed by Luang Por Pae himself are now more or less depleted, and are much rarer than the ever were in recent years. 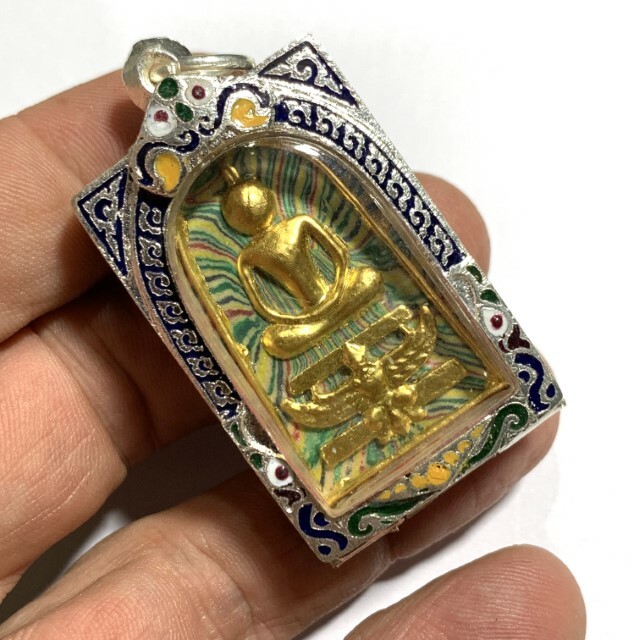 The rainbow Somdej amulets of Luang Por Pae have always been a Pra Niyom preferred classic renowned for Kong Grapan Chadtri Klaew Klaad and Maha Lap powers, and for their immense beauty. Many temples have emulated Luang Por Pae's famous Rainbow Somdej, which is a testament to the Regal Eminence which this amulet exudes. 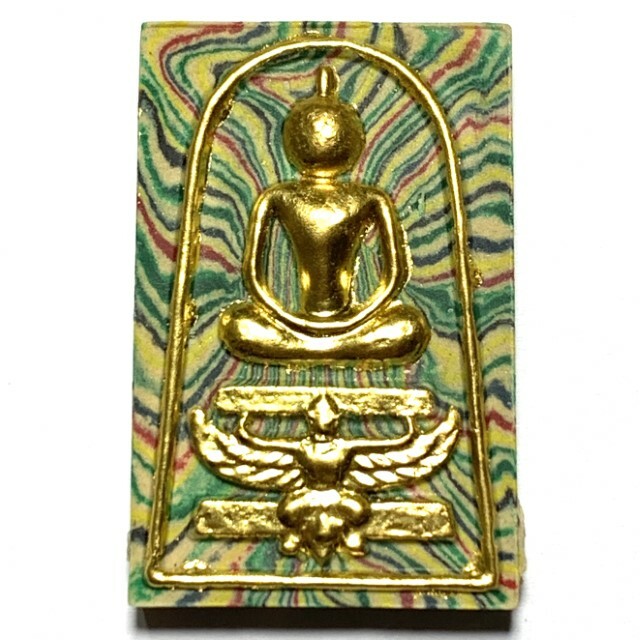 The amulet, has Green based Muan Sarn with Rainbow coloured powders streaming through the amulet. with gold painted Buddha image on the front face, seated on a Garuda Dais. This model measures 4 x 3.8 Cm, which is a 'Pim Yai, sized Pra Somdej roughly the size of the famous Pim Pra Pratan (Pim Yai), which is popular from Wat Rakang Kositaram, Wat Bang Khun Prohm, and from Wat Bovornives. 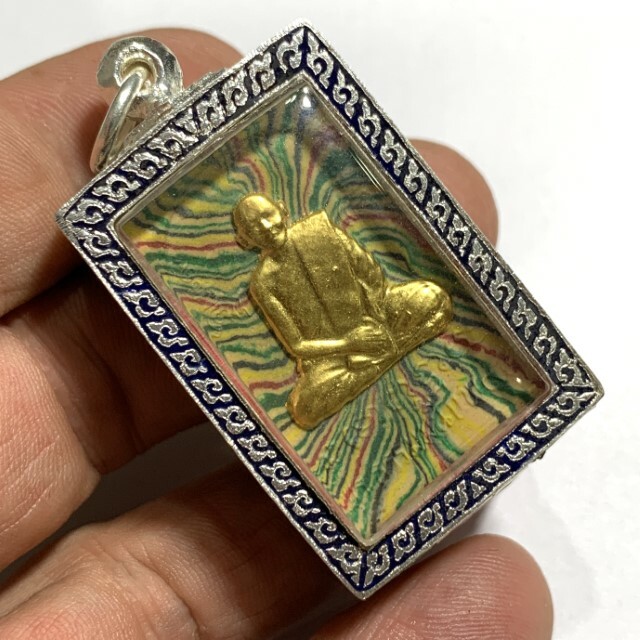 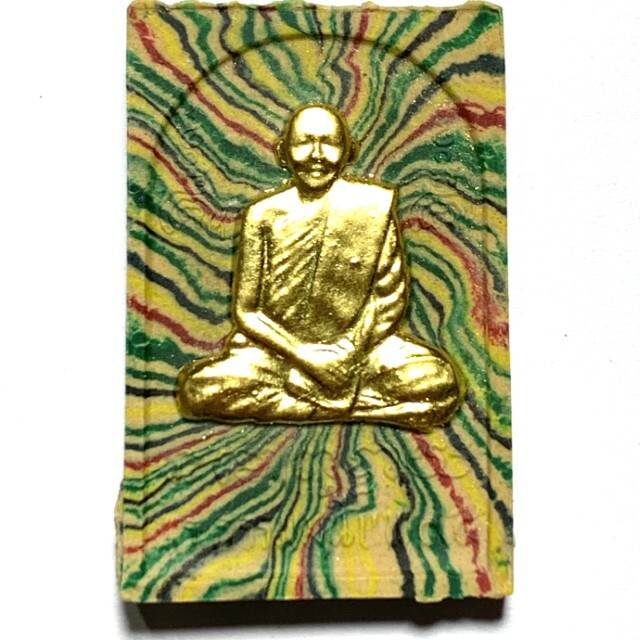 The image of the Buddha sitting upon the Garuda dais, has a swollen chest and feline waist, that is elongated, and is known in Thai language, as 'Ok Krut', which means 'chest of the Garuda'. The head of the border has a very pointed and elongated topknot, which almost pierces the overhead arch. The actual face area is not elongated, rather very round and protuberant, like a spherical dome. This kind of pointed topknot and round face, is known as 'Siarn Badtr', which means 'head like an almsbowl'. This model when given its full title, would hence be called; "Pra Somdej Pae Thaan Krut Hnaa Tong Ok Krut Siarn Badtr". 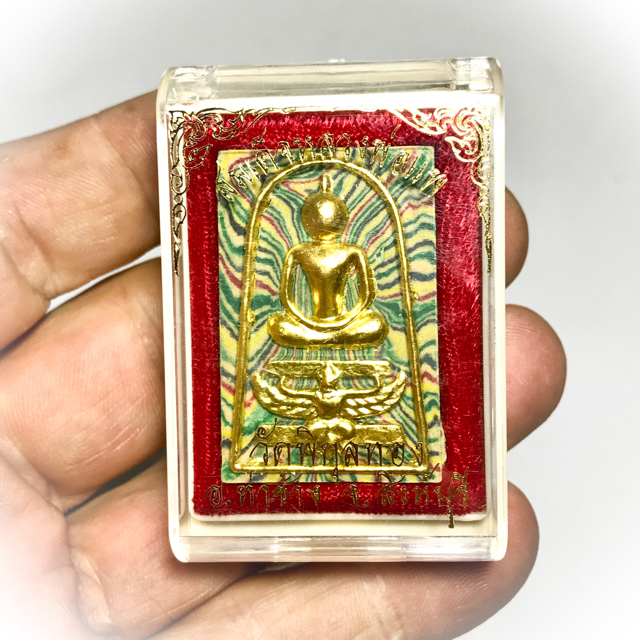 The rear side of the Amulets features some sacred geometry and ancient Khmer Sanskrit inscriptions, of the syllables 'Na Mo Put Taa Ya', and an image of the grandmaster Luang Por Pae. 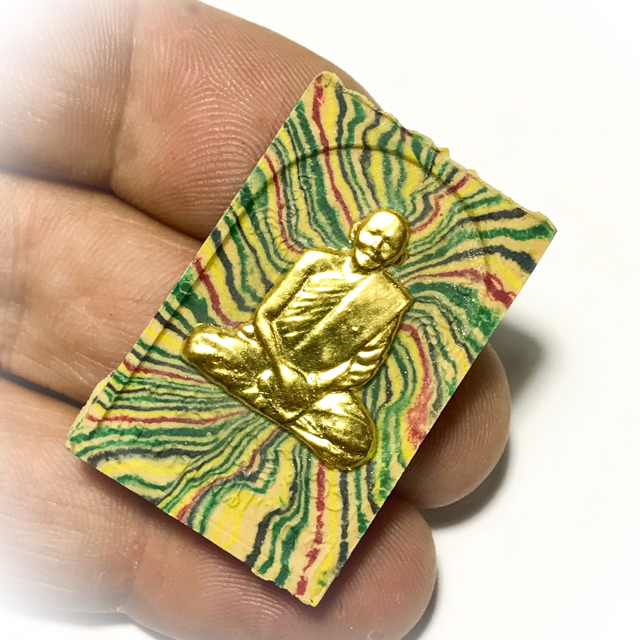 Either side of the grand master, are the famous 'Yant Putsoorn' concentrically written Yantra spells, which are present on almost all, if not all authentic amulets from this guru master. The amulets were made in red, green rainbow, white, black and gold, in white sacred powder, or in rainbow colours with, or without gold leaf, and in this green rainbow powder with gold face on both sides. Some of the rare editions with Takrut spells inserted into the Muan Sarn Sacred Powders, were also released in varied limited edition numbers. 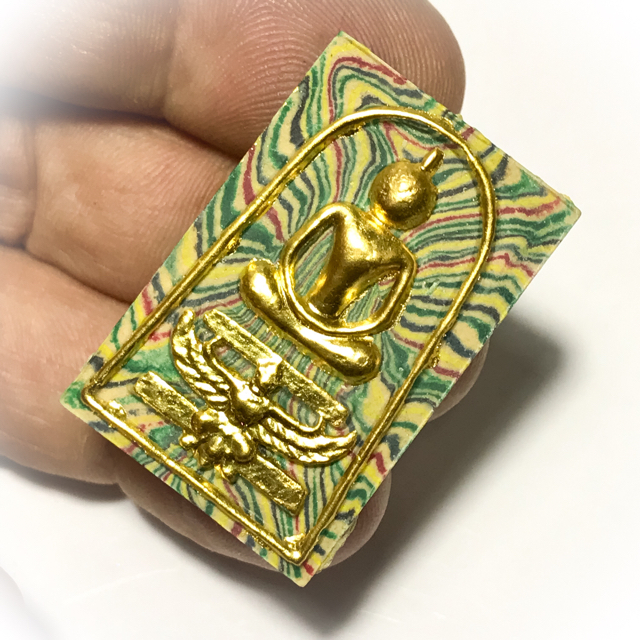 These and almost all of his amulets can be found in many volumes of official documentation which is part of what makes his sacred amulets so popular, because of their ease of authentication when one has good reference images for study. The detail is much finer and detailed, than it is in fakes.

The inserts in the bases of many of the amulets are also had to fake. And in especially the case of the rainbow coloured ones, very few forgeries manage to produce the distinct separation of each coloured line,within the rainbow patterns of his most dense and hard dry sacred Amulets. 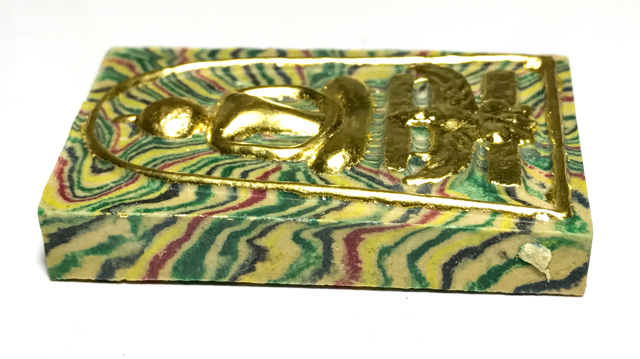 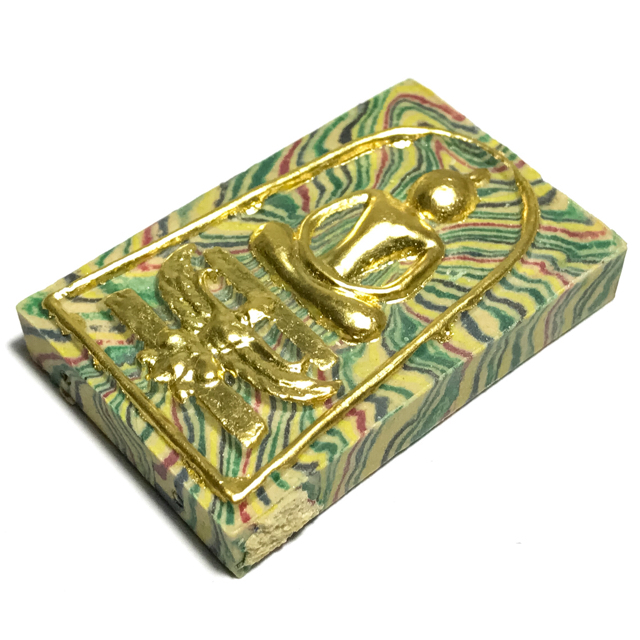 Another part of the reasons for the rapid depletion and increased rarity, is the fact that his amulets are not only of top importance and collectability in Thailand, rather, also on international shores. Many Singaporeans Malaysians Taiwanese and Hong Kong nationals, have been buying up these amulets for more than the last few decades. This has caused a massive depletion of those amulets which could still be found on the market back in those days. It began to become noticeable that the Pra Somdej Sai Rung had become difficult to find around late 1990's, and since then they have become ever rarer. 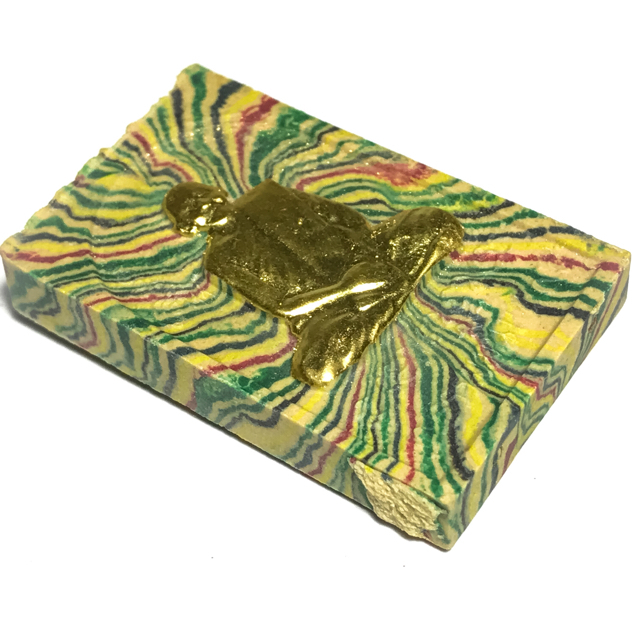 As a result, these amulets have not only attained the grand respect and high spiritual and monetary value that they possess today, but are also now entering the halls of fame of essential rarities, which are immensely hard to find. We predict that by the time our children are grown up, these amulets will be of immensely increased value, and incredibly hard to find one on offer at all, except at an exorbitant price. We for one, are attempting to seek and find any remaining exhibits we can encounter, and must admit, that the hunt, is not an easy one. 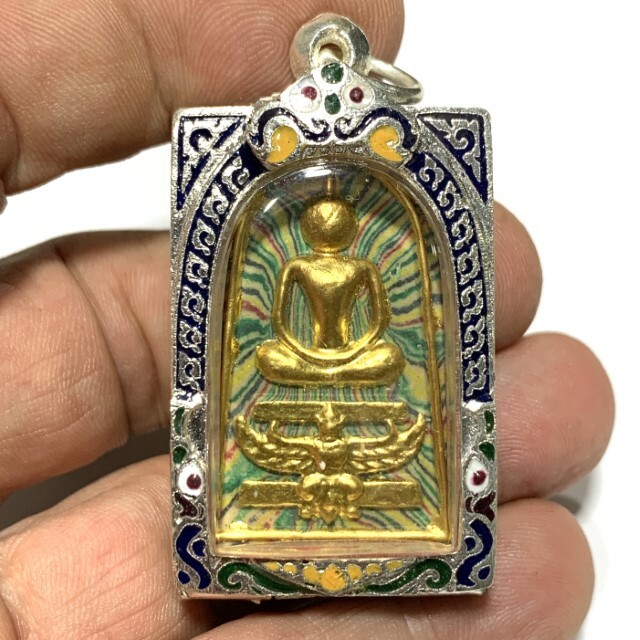 Use the Kata Ārātanā Pra Krueang for Bucha, by beginning with the Maha Namasakara; 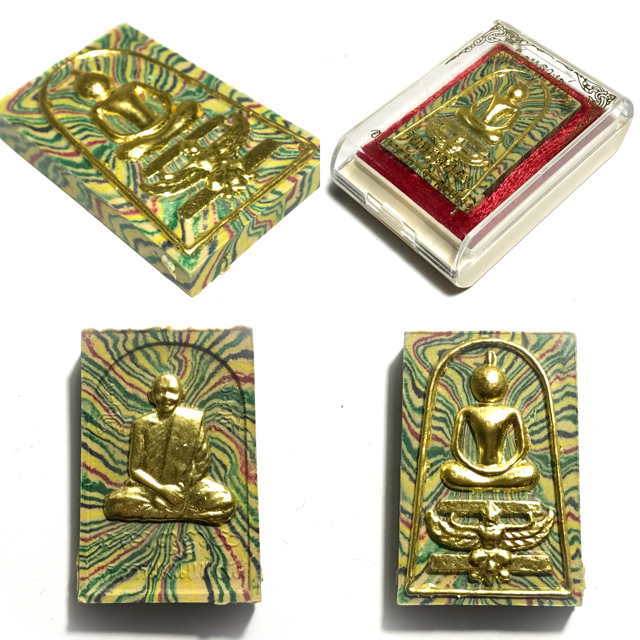