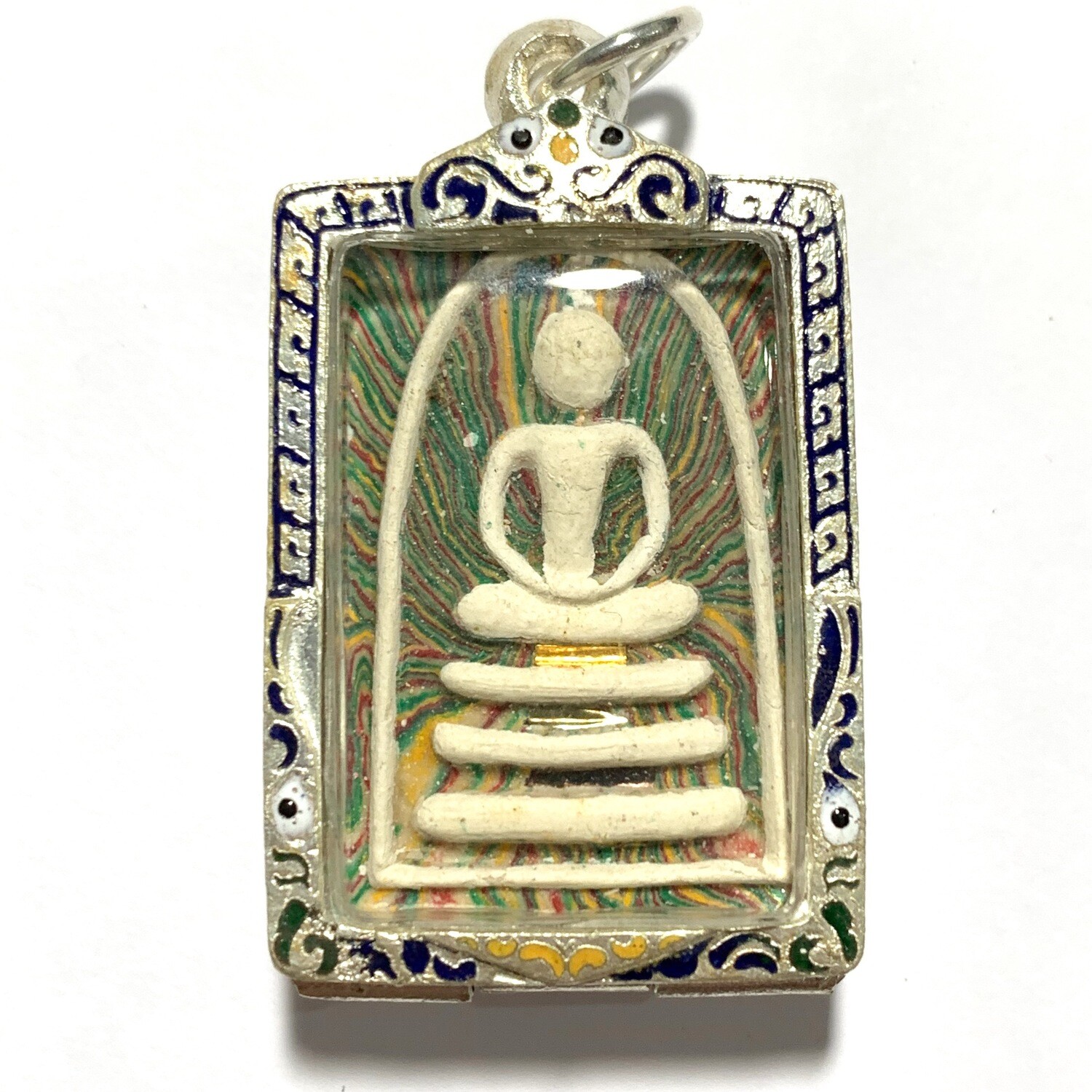 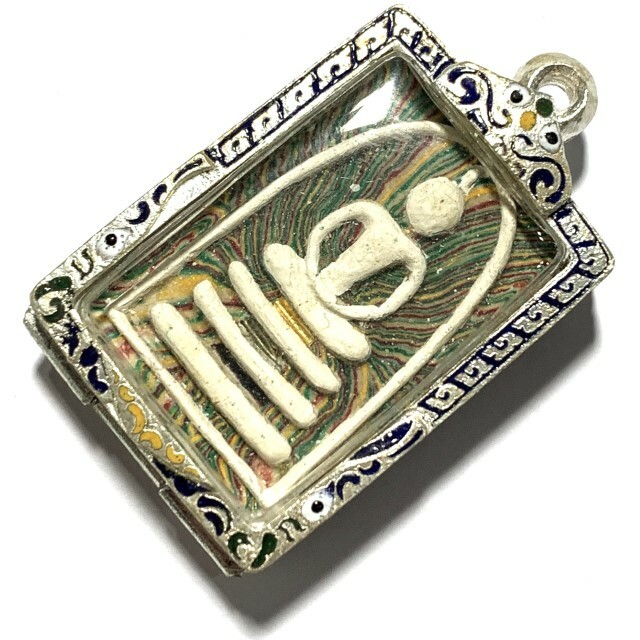 Free Shipping Per Registered Air Parcel Worldwide is Included. This 'Pim Gammagarn amulet is a Most extremely sought after and highly valued classic Pim Niyom amulet in its own right, that is very rare to encounter. This Pra Somdej Pae Sai Rung Rainbow Powder Amulets are very rare to find in any edition, but for the fact this model is a Pim Gammagarn, differentiated by the arch shaped image on rear face, with 3 Takrut and is an exceptionally rare amulet. 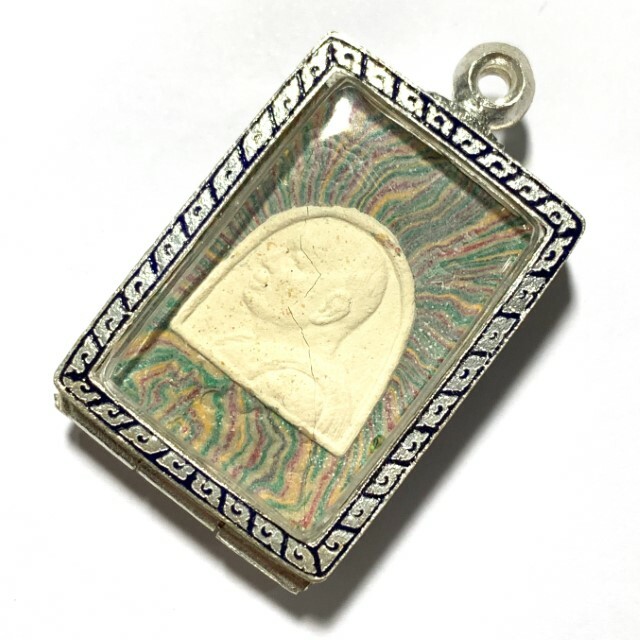 This exhibit is s most evidently a competition or showcase masterpiece amulet, of the Highest Spiritually Estimable Value, and now becoming one of the most highly prized amulets within the Pra Somdej master Class category of Collectorship. Although the Pra Sondej Sai Rung of LP Pae are by no means cheap, they are still affordable for most people, and their Sacred Power and Beauty has always been higher than the worldly value (price) 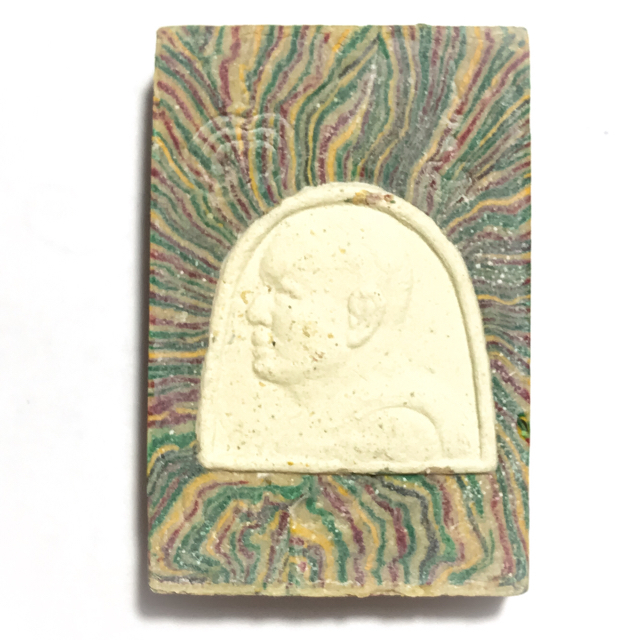 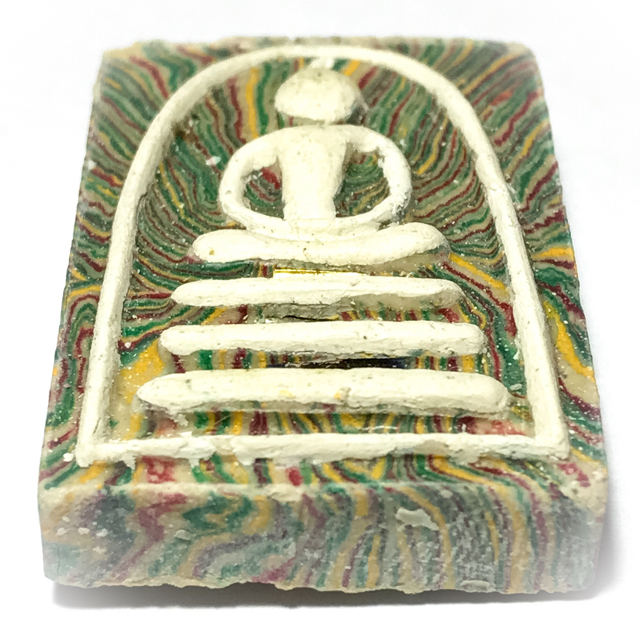 Luang Por Pae 1000, 2000, 4000 are the most highly valued and sought after (and rarest) of all the different series, because these were the editions which made the least numbers of amulets, increasing their rarity. However, ghar are also very a series of amulet Have the same Pae Pan 1000, 2000, 3000, 4000 Name which were made posthumously, which makes for a very confusing and intricate extensive study Of the pantheon, In order to understand each and every different model, to separate the editions which the master, blessed. and which were made posthumously. 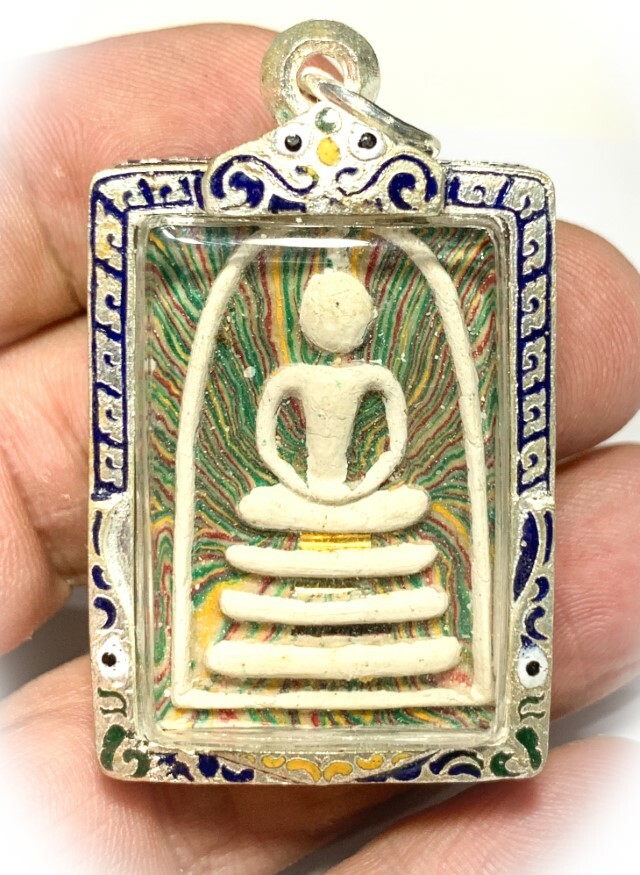 In addition, his 5000 and now the 9000 Editions have already long since become rarities, and are very difficult to find. All Sai Rung Rainbow versions of all editions are extremely favored, and considered to be Master-Class. 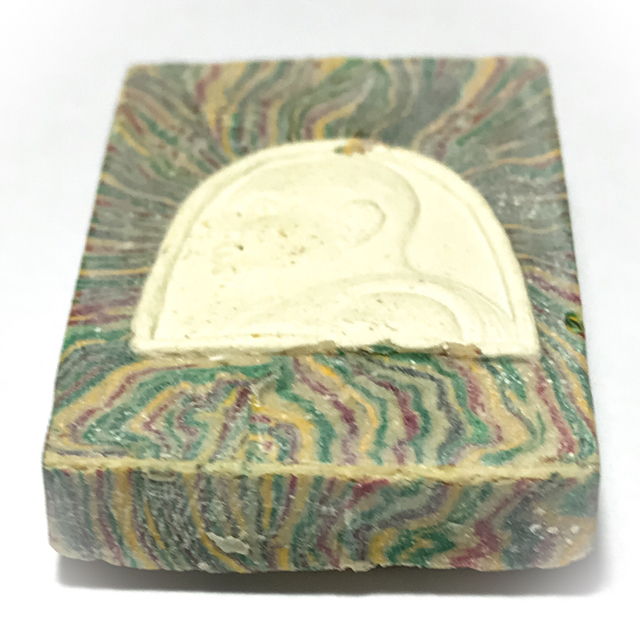 There were also smaller 'Pim Kanaen' models in each edition, which had also usually two different styles of miniature Somdej amulet released; One with a full frontal image of Luang Por Pae on the back, and the second tier of the Buddha's dais having a 'Thaan Singh' (lion legs). The other model has a design similar to the Thai number eight on the rear face, and no lion legs (table legs) on the Dais/Pedestal of the Buddha. Neither miniature 'Pim Kanaen' model had any lettering statiung the edition. A Total of Nine Pae Pan++ editions were made. 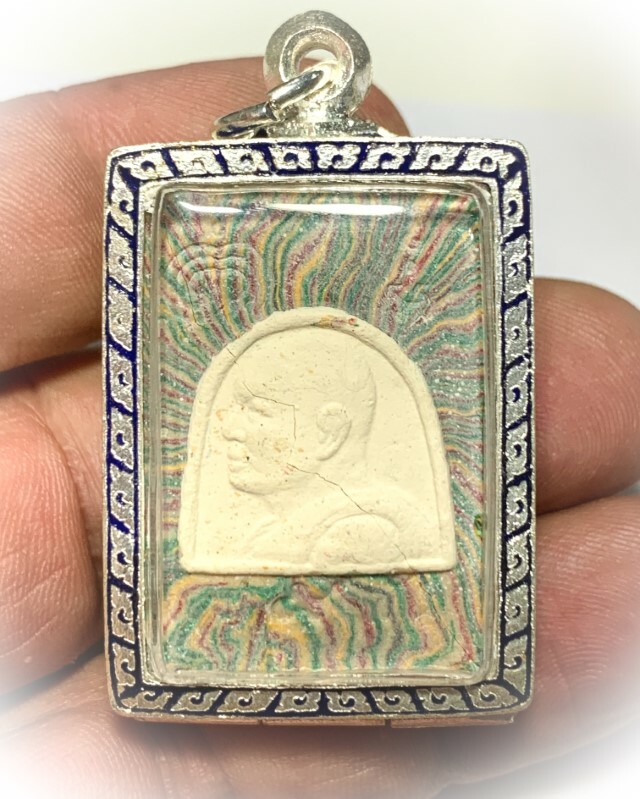 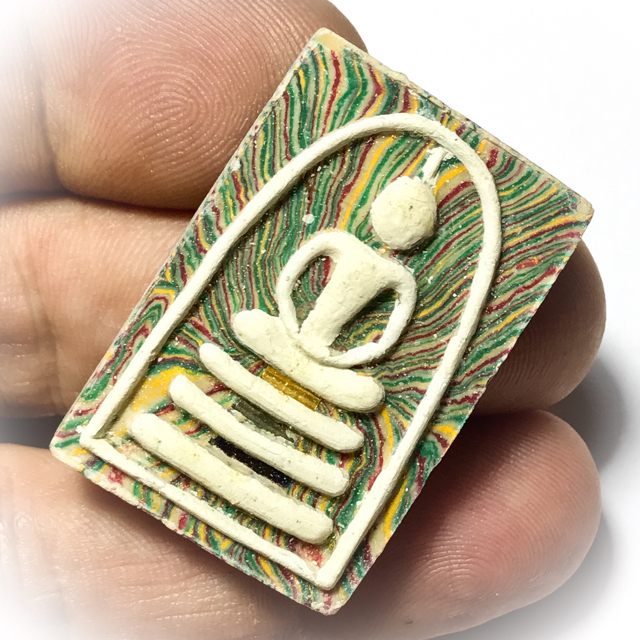 Tricolored Takrut are embedded between the tiers of the 3 tiered Dais upon which the Somdej Buddha sits. The back face of the amulet has a Cameo Image, and the traditional name of 'Pae' (แพ) embossed within an arched frame, with the number 9 (๙), and the word 'Pan'(พัน), meaning 'thousand', which authenticates, and states the edition. 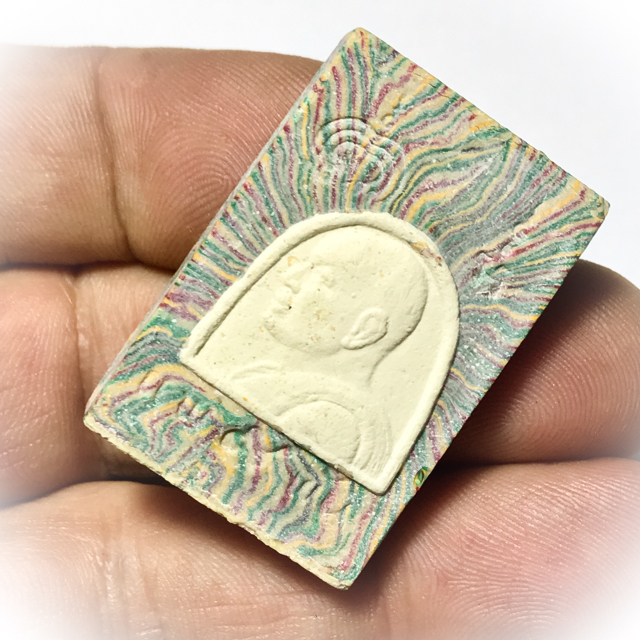 Luang Por Pae, or, better known as Somdej Sangkarach Pae, is one of the last half century's most reverent and long-standing respected monks of the royal procession of stately esteemed monks, Who has excelled in both his behavioral practice, as well as his academic studies, and adept applied practice of Vipassana Kammathana in the Thai Tudong Forest tradition. 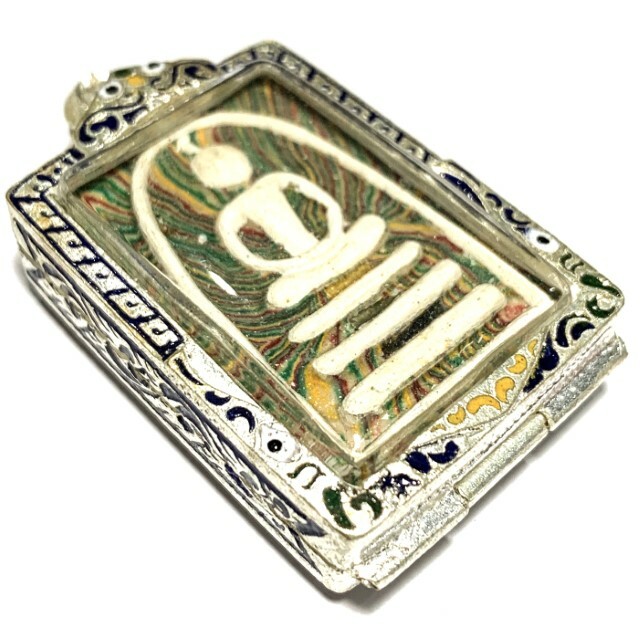 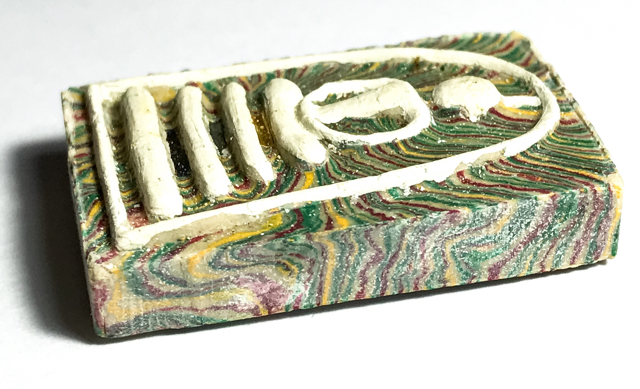 The amulets of this great master, have been seen to dwindle from the public amulet markets, which is due to the fact that not only Thai people have been reverie and holding his Amulets over the last decade or so up, rather that all around Southeast Asia. Even as far as western world, people have been snapping up and hiding and stashing away his Amulets like treasure that may never be found again, which is indeed becoming the case.

This amulet comes with its original box from the temple, and free silver plated steel casing 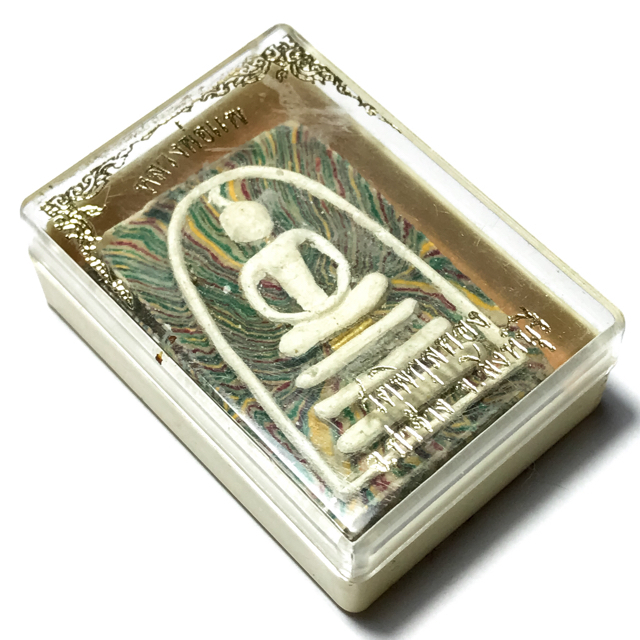 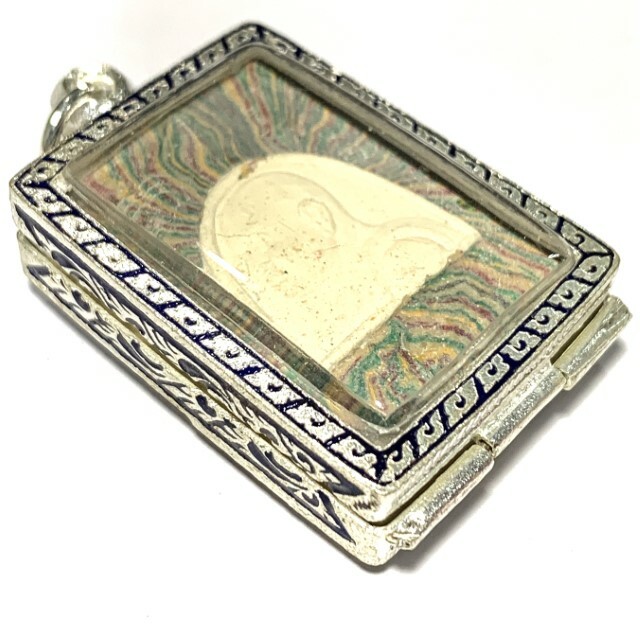 They are now not only long standing eternal classic amulets, but also extreme rarities and the next decades can expect to see these Amulets becoming impossible to seek out. The Somdej Pae 1000, 2000 and 4000 Editions however were made in much more limited quantities, as special releases, and carry high prices. 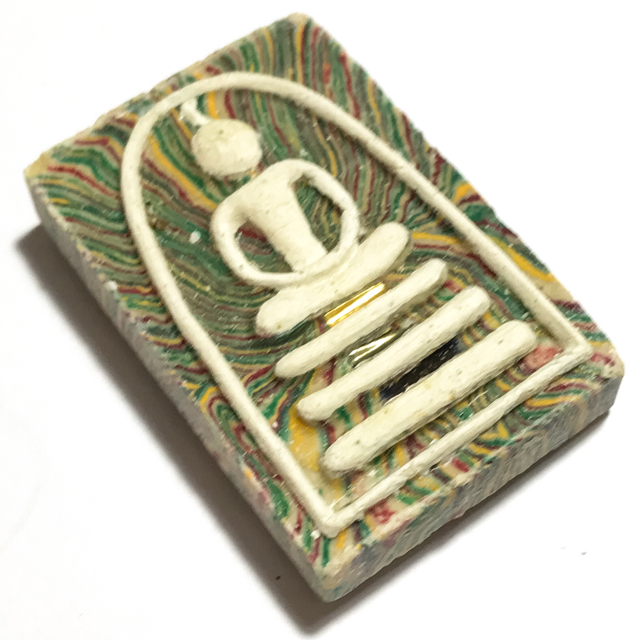 Made from Pong Puttakun, (Buddhakun Powders, according to the Dtamra Pra Somdej making, using the five sacred powders made from Yantra Inscriptions (Pong Wised 5 Chanid), which were mixed with 'Pong Dork Pikul' Flower Pollens. Luang Por Pae's amulets are famous for the mass of Pong Puttakun that rises to the surface and leaves a fine layer of white mildew upon the surface, revealing empowerment by a monk with true purity of practice. 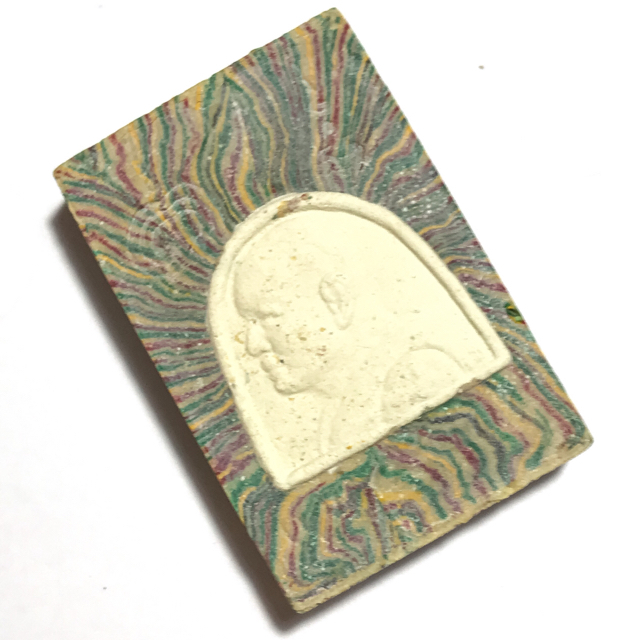 Below is a HD Video of another Pra Somdej Sai Rung from the Pae 2000 Edition, for enjoyment, comparison and study of the characteristics of Luang Por Pae Amulet

This Pra Somdej Pae Gao Pan (9000) 2536 BE, is a Historical Classic amulet, which can easily be included in the Benjapakee class of amulets under the Pra Somdej Category. This is because the Pra Somdej Category of Benjapakee Classics normally includes any top Classic which is widely accepted and has more than enough points of reference, to pass the correct Pedigree. It is one of the more highly preferred, and rarer of the mid to latter Era of Luang Por Pae amulets. It is very recommendable amulet to collect and Bucha, for indeed, the days have arrived where the Pra Somdej Luang Por Pae is an extreme rarity, and the future will see them impossible to find, and far beyond the reach of those who seek one. 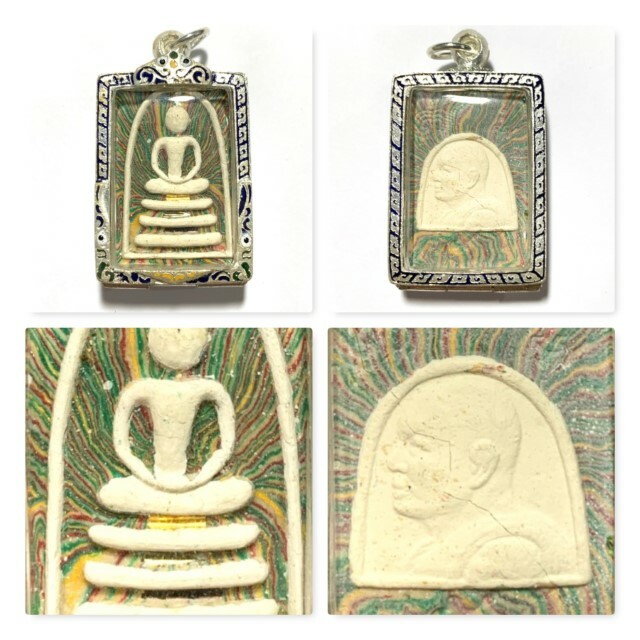