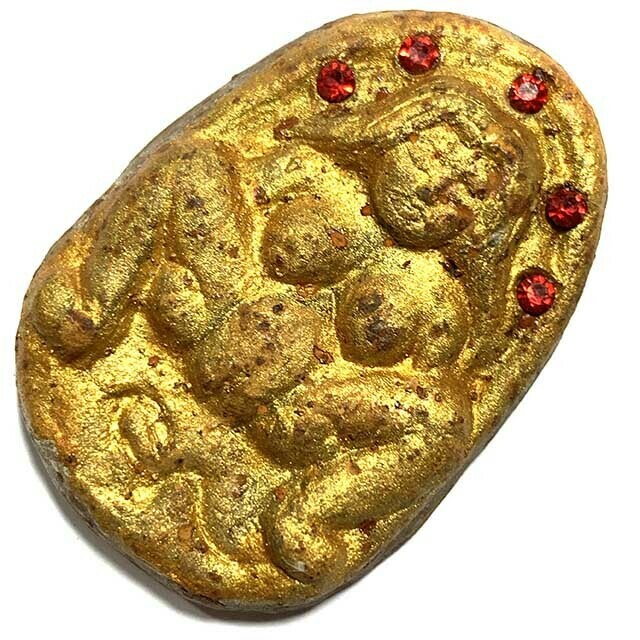 Mae Mae Bper Nang Prai Aathan Nuea Pong Asupa Ongk Kroo Pim Jumbo Ongk Kroo Prai Deva amulet, in Sorcerous Necromantic Prai Powders, as PIm Hlang Baeb (concave indentation of fron image on rear face), from the Great Luang Por PIna of Wat ta Geuy (Wat sanom Lao). The Mae Bper Hlang Baeb, is an extreme rarity, one of many of Luang Por Pina's 'Krueang Rang' Talismanic Amulets that were made in a multitude of different forms, which are mostly undocumented in official catalogues, due to their immense variety of forms, great rarity, and small numbers, which results in them being very difficult to catalogue at all. 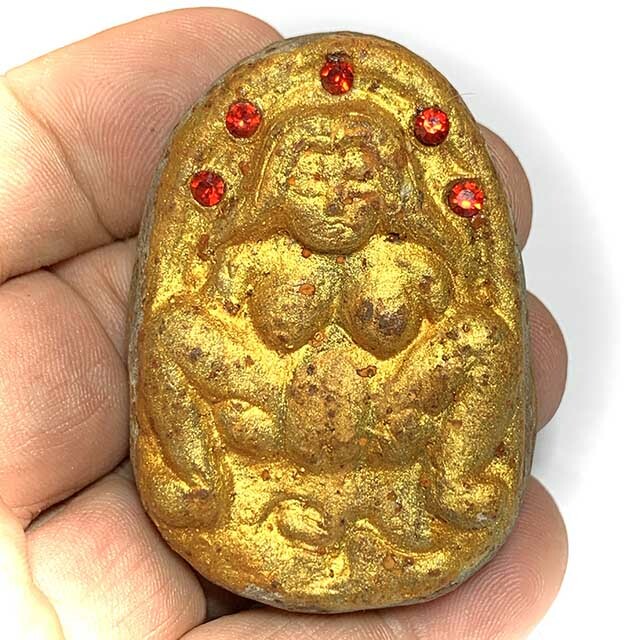 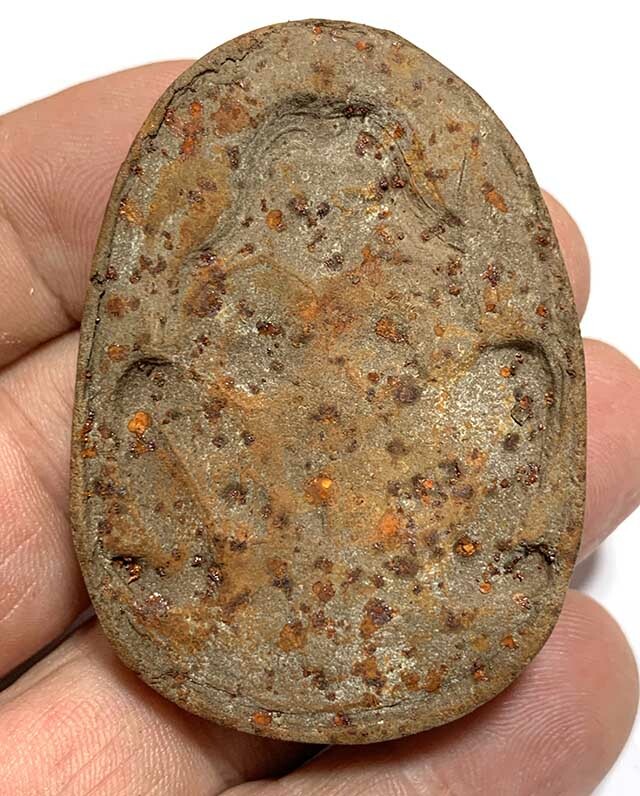 The Mae Bper is a Deva of the 'Maha Phuudt' variety, of the Ghostly Spirit realms, who is full of Prai Hian Psychic Power. The amulet was created by Luang Por Pina with the Ancient Invocations of Prai Necromancy, which is renowned for its immense power and fast acting Magickal Forces. 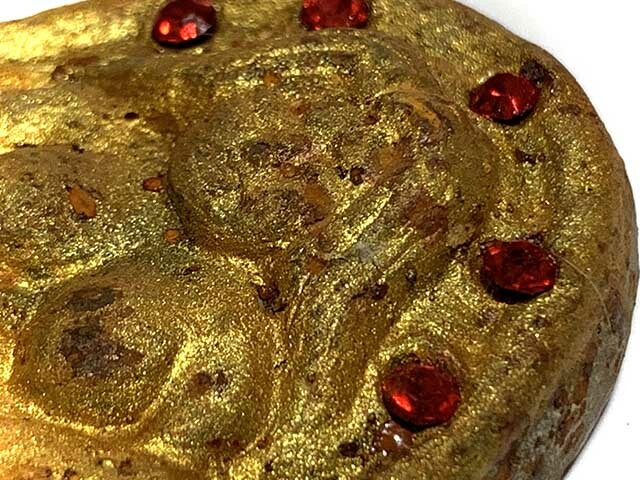 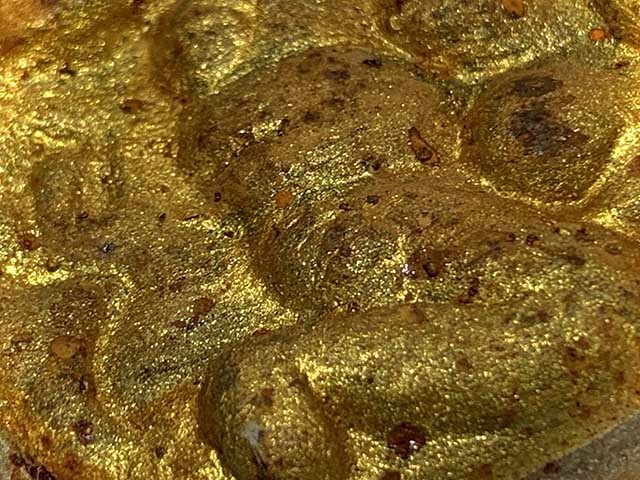 The rear face of the amulet has an image of the Mae Bper in concave relief indented on the rear face, making this a Pim Jumbo Ongk Kroo Hlang Baeb.The typical resinous particles and tonanlity of the Muan Sarn sacred Powders reveal the true presence and authenticity of the sacred necromantic Pong Asupa of Luang Por Pina. 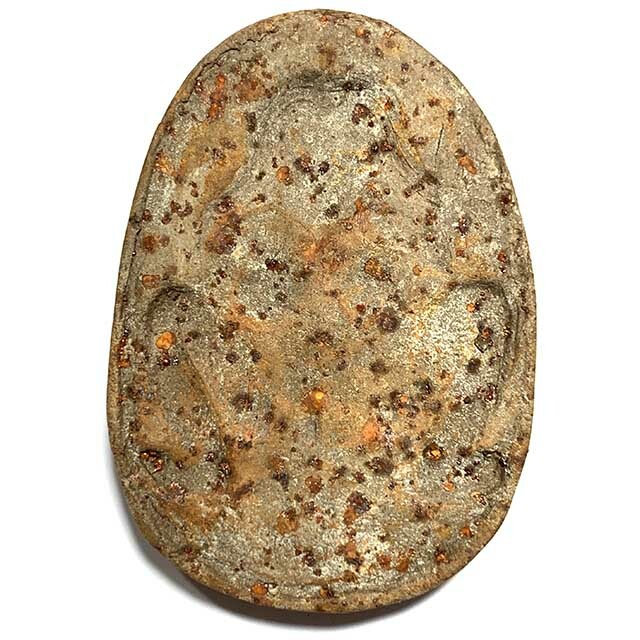 Luang Por Pina was inimitable in the sense, that he created amulets that were unlike those from any other Master. His amulets were both extremely rich in Powerful Muan Sarn Magickal Powders, and are full of Sorcerous Power and Deep Symbolic Meaning. The Mae Bper is one of Luang Por's lesser known amulets, that is in every sense an essential rarity for devotees of this great monk, and an extremely powerful amulet recommendable for those who believe in the power of Prai Necromancy. 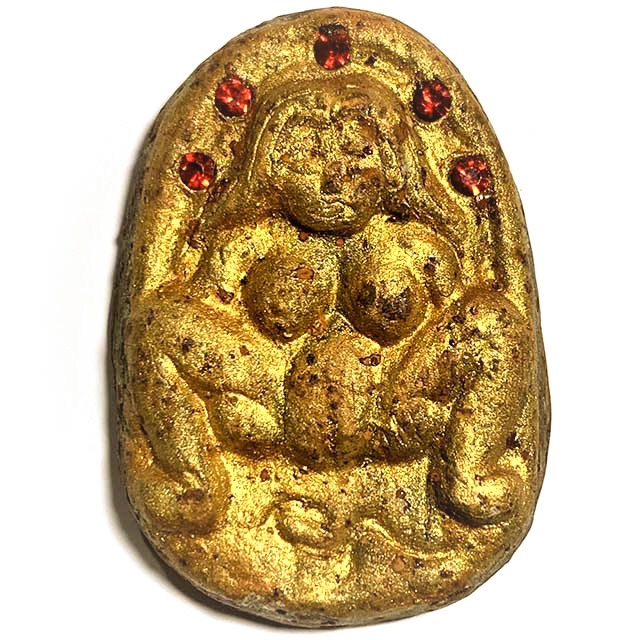 Those who seek true power of Maha Sanaeh Magic, would do no better than to try out the power of such an amulet as the Mae Nang Prai Mae Bper Aathan Nuea Pong Asupa of Luang Por Pina. As far as rarity and collectorship value is concerned, it goes without saying, that the days where an amulet from Luang Por Pina could be found with ease, are long gone, and that it is indeed a stroke of luck (and also of course due to our hard work scouring the country for any remaining exhibits to present to you), to be able to find any at all in circulation. 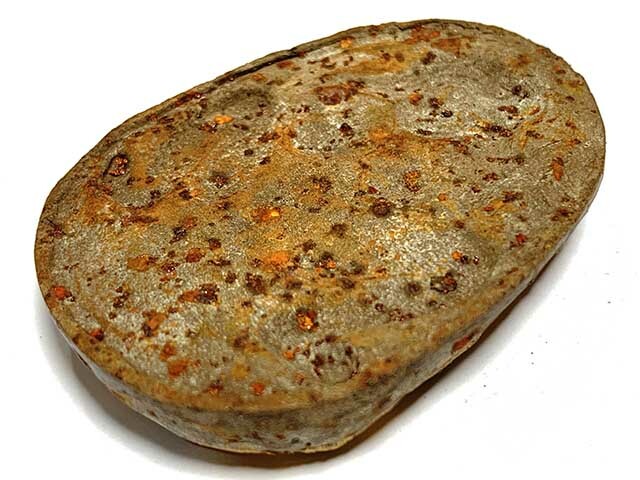 The Mae Ber Nuea Pong Asupa is full of Sacred Prai Necromantic and Elemental Powders, which are a secret formula of Luang Por Pina that no person truly knows the formula in its entirety. Another aspect of what makes Luang Por Pina's amulets inimitable and gives them a certain future of pricelessness, is the fact that the secret formulas of Muan Sarn Powders has not been passed on in its entirety to any apprentice. 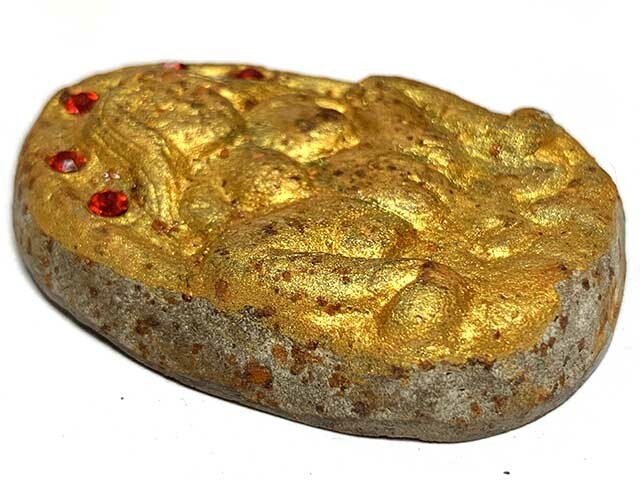 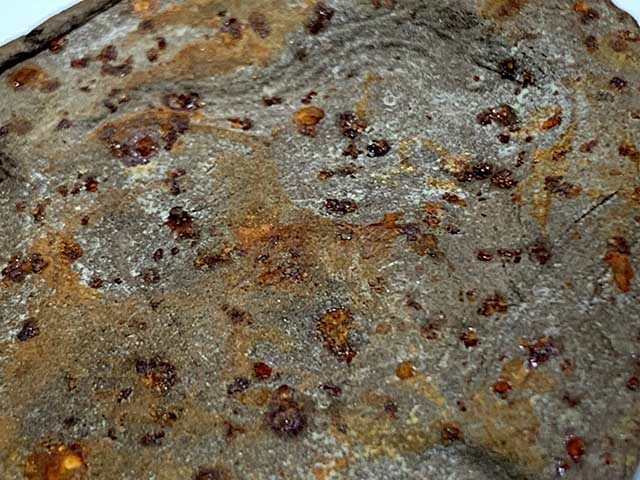 It is said that he was able to read the minds and intentions of other Humans, and bring amulets to life with is Empowerment Methods, and that his amulets were able to give signs and also can be beseech-ed and prayed to for wish fulfillment (Sarapat Neuk). There are many stories of Miraculous Events occurring through his amulets. Luang Por Pina is known to have performed strange Magical feats in front of the eyes of his disciples many times, especially when devotees would ask him for an amulet. 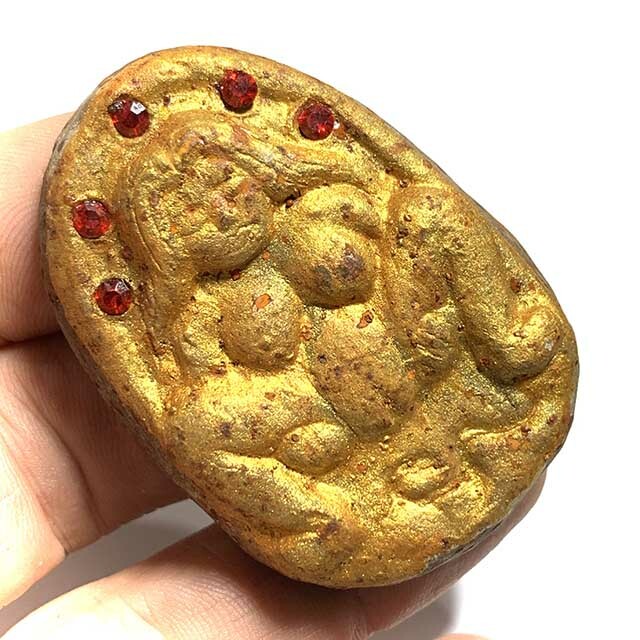 He would ask the devotee to lay down and open their eyes, and would take a handful of sand and pour it over their face, as they would hold the amulet in the hand. But the sand would bounce back before it hit their eyes, and no matter how much was poured on the face, not a single grain of sand would be able to enter the eyes of the devotee, becoming repelled as if by a force field before it touched the eyes. 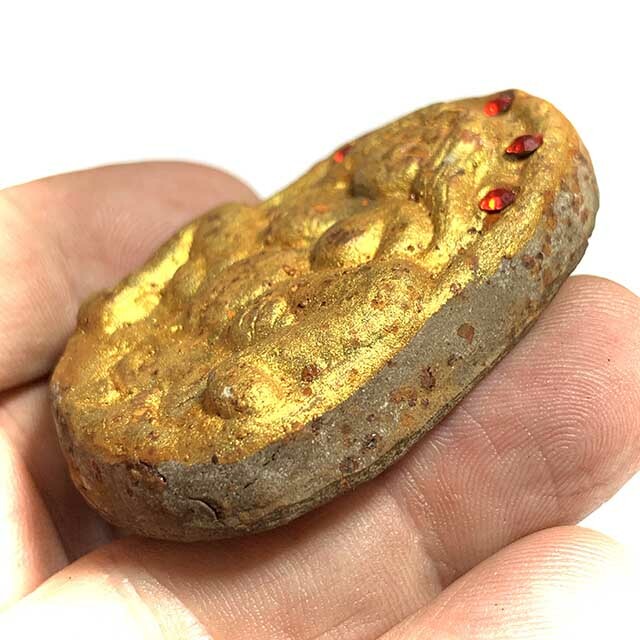 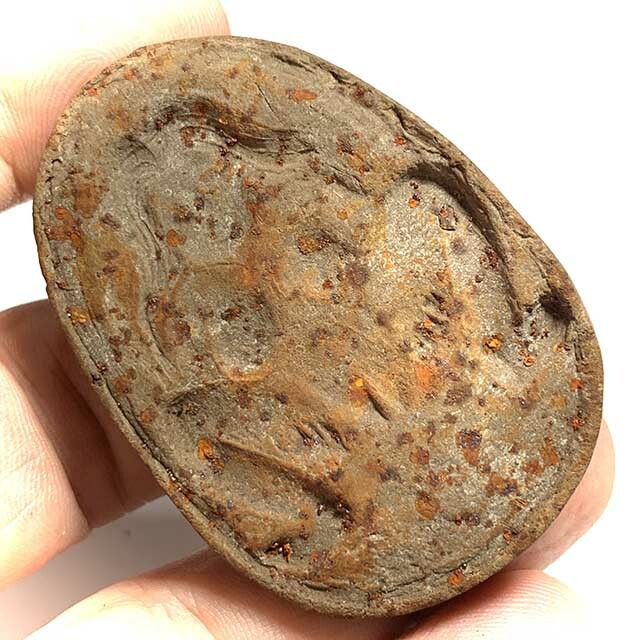 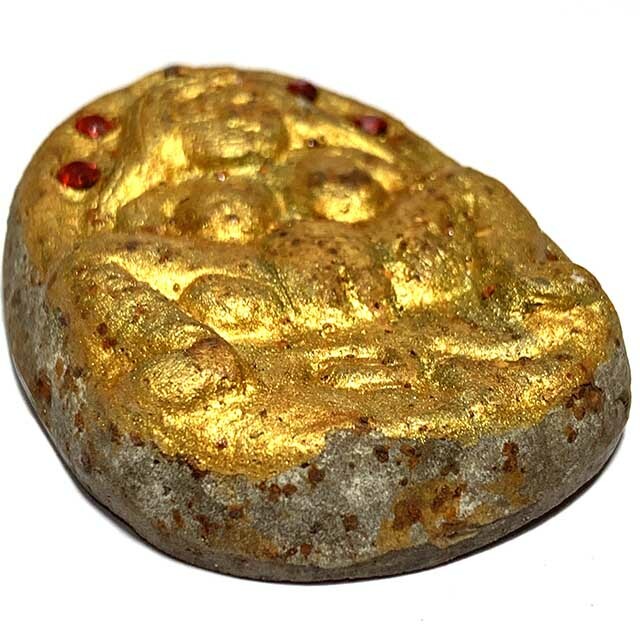 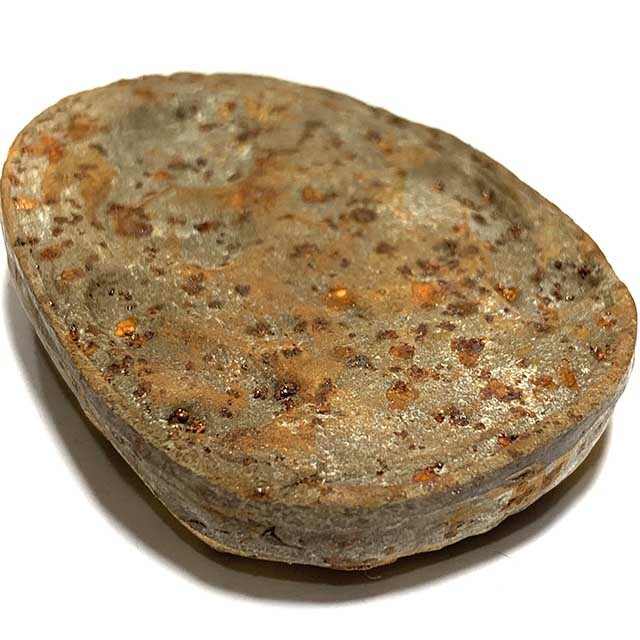 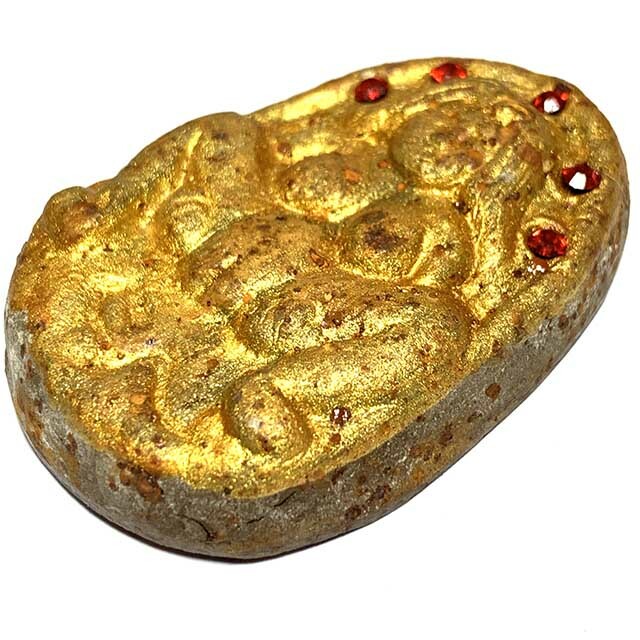 Kata for giving calling to receive food and drink offerings

Offer whisky (one small glass), Light one stick of incense, and chant the following Kata; 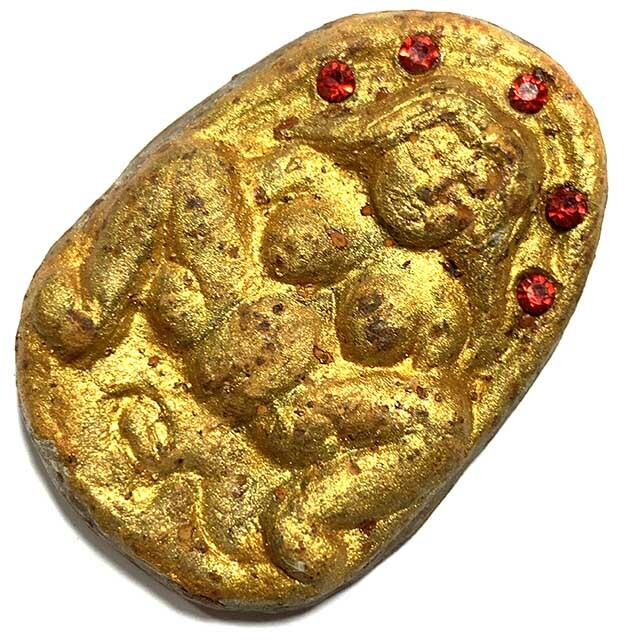 Kata for Invocation of the Maha Phuudt 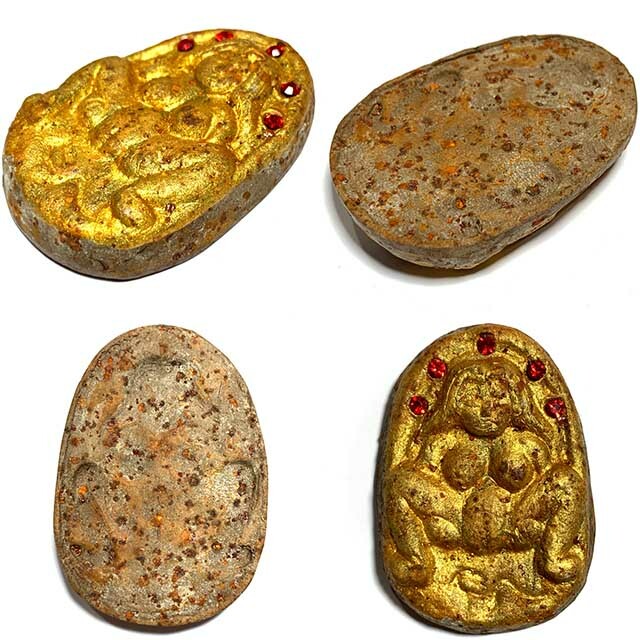