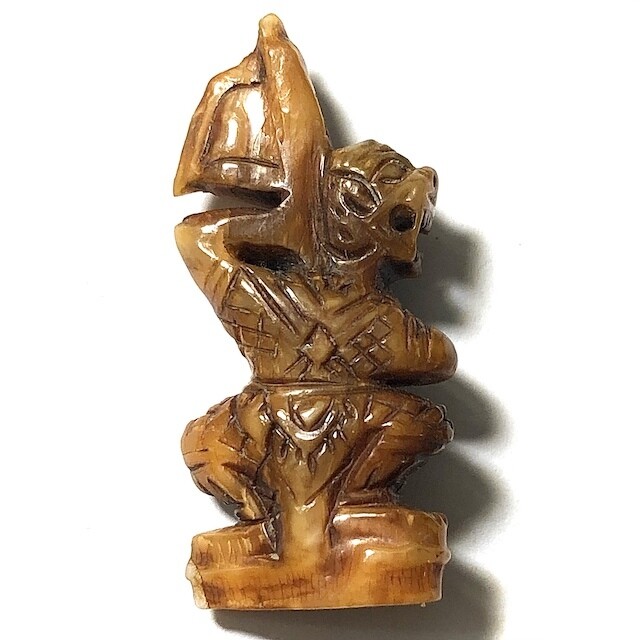 Hand Carved Ivory Hand Inscribed with Khom Spells, the Monkey Vanora God Hanuman Chern Tong (Hanuman waving a warflag), the general of the God Rama's Army, symbol of Fidelity, Invincibility, Victory, Agility and Fast Wittedness. The amulet is carved exquisitely, by one of the preferred top artisans, for blessing by the Great Olden Days Master of World Class Legendary Status, Luang Por Derm Puttasaro, of Wat Nong Po. Estimated around 2470 BE, this immensely detailed and decoratively carved amulet is both imbued with the natural Power of Maha Amnaj instilled by mother nature believed to dwell within all Ivory, Teeth and Tusks, of Tigers, Bears, Jungle Cats, Wolves, Wild Boars and Jungle Predators, as well as within all the bones of such creatures, as well as being empowered with the Wicha Hanuman of Luang Por Derm. 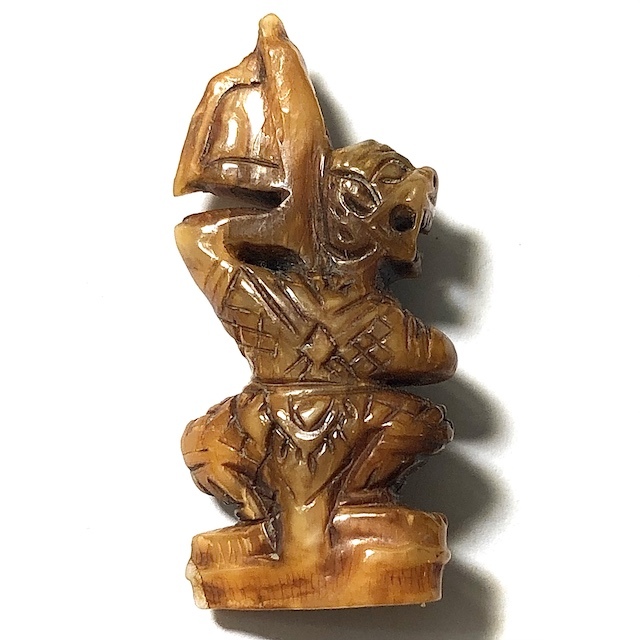 Luang Por Derm was famous for many amulets, but the carved ivory and predator tooth amulets, along with his Nang Kwak, Roop Lor statuettes, and Mitmor knives, has become synonymous with his name. Luang Por made carved Singha Lions in various forms, and many other kinds of carved amulets, such as the hanuman, Mitmor, Buddha-Rupa, as well as a host of other types of blessed items be they Pha Yant, Hand carved Loi Ongk mini statuettes, Photographs, Takrut, and sacred powder amulets. 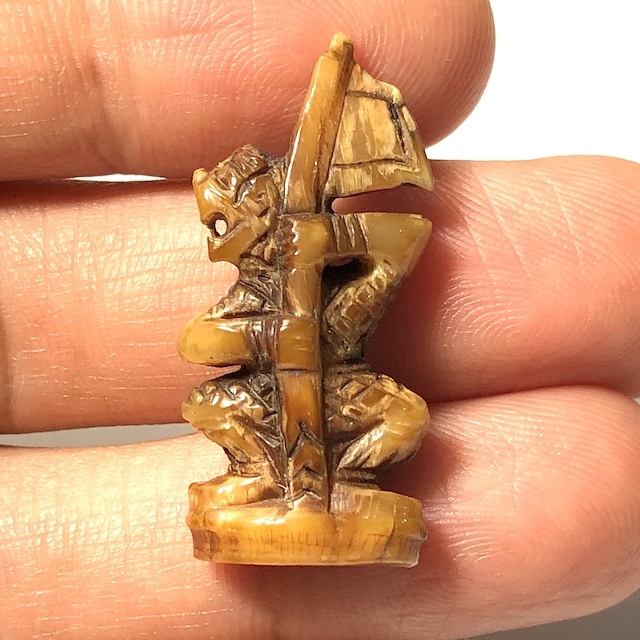 A most original miniature hand carved ivory Hanuman, of the finest artisanrship, with truly exquisitely fashioned decorative embellishments, that is an immense Rarity to come across, from the early times where Devotees would flock to the temple of Wat Nong Po, to beseech Luang Por Derm to bless amulets. 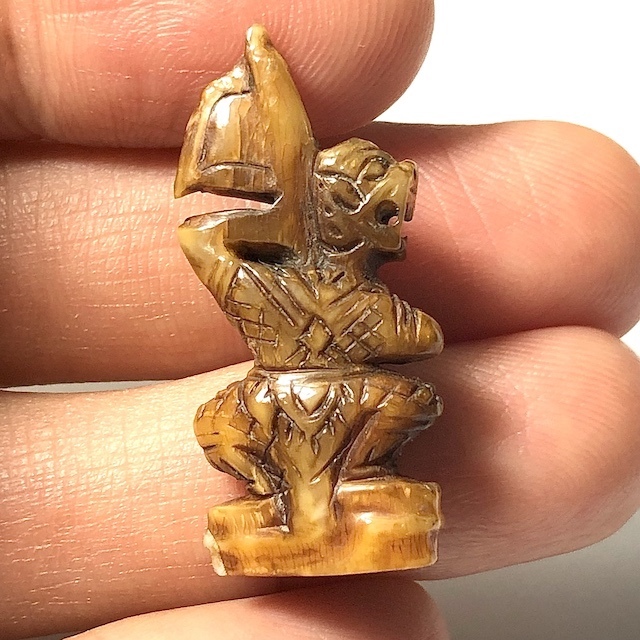 Below; the recognizable handwriting of Khom Sacred NA Agkhara can be seen inscribed upon the ivory, which makes this a definite LP Derm, for those which he personally gave individual attention to would receive his inscription when possible. 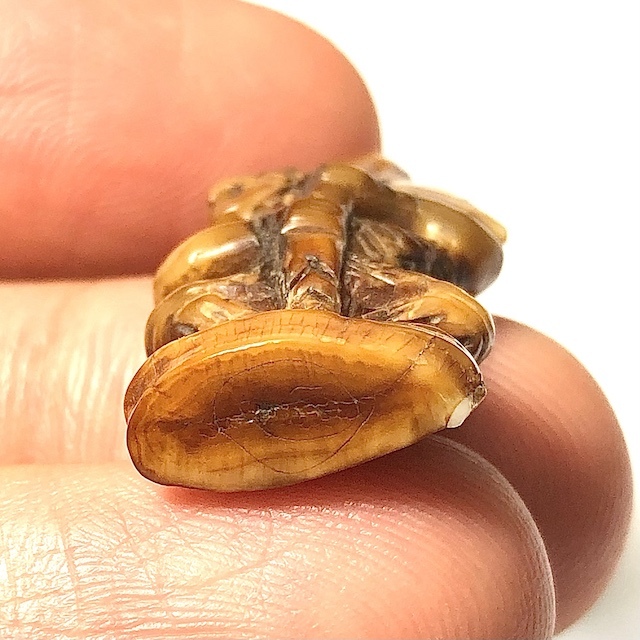 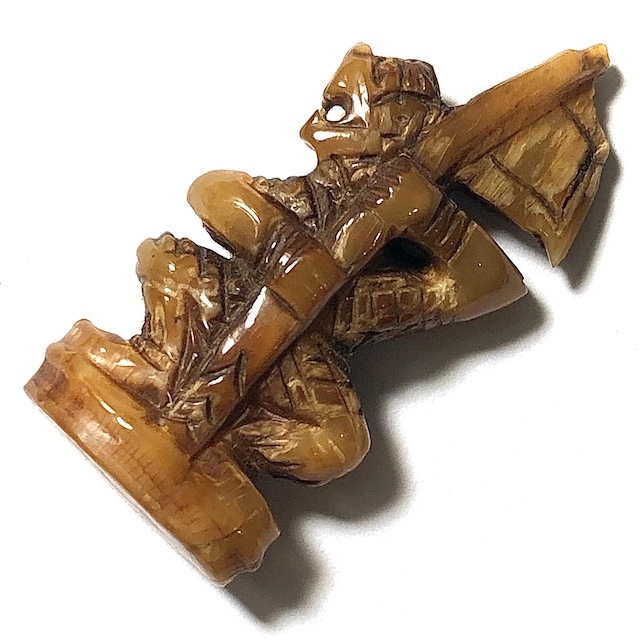 Luang Por Derm's Carved Ivory, Boar Tusk and TigerTeeth amulets are among the most highly desired and collected items. The Wicha of Luang Por Derm is continued to this day through his Looksit of the various Master Lineages. His carved ivory, and wooden amulets are vary rare items, and highly individual in appearance, for they were made by individual Artisans who were Initiated and had received the Wicha, and 'Korb Kroo' Ritual Empowerment as permission from Luang Por Derm himself. 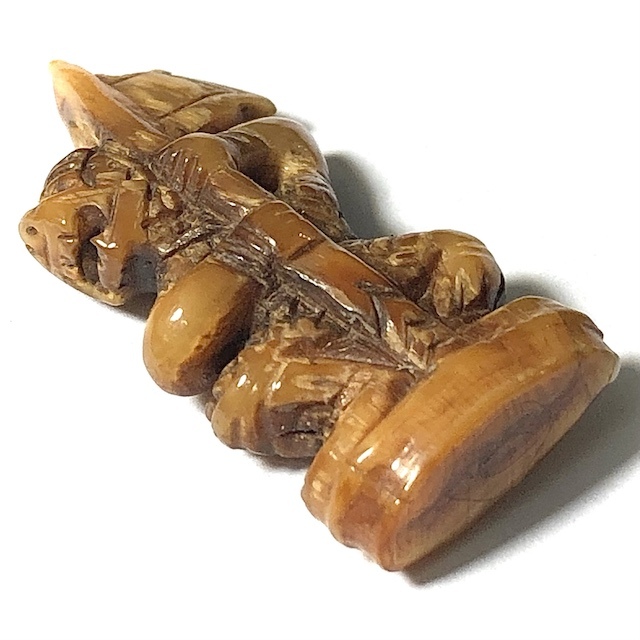 Only such Lineage Master Initiates were allowed to perform carving or knife forging for Luang Por Derm, and even to this day after his passing, all the Posthumous Editions of amulets which derive from Masters who are Initiates of Luang Por Derm, must use only amulets and Artisanry which has been made by an Initiated Artisan. This great Master and Abbot of Wat Nong Po, is believed to have chosen to be born on Earth in the village of Nong Po, to lighten the sufferings of Buddhist People, and to bestow them with Blessings to lead them on their way towards Happiness, and Alleviate their Sufferings, and Poverty. 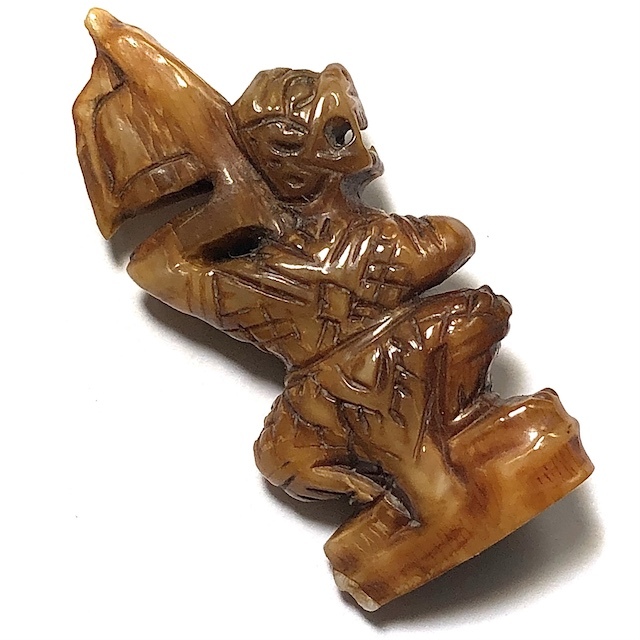 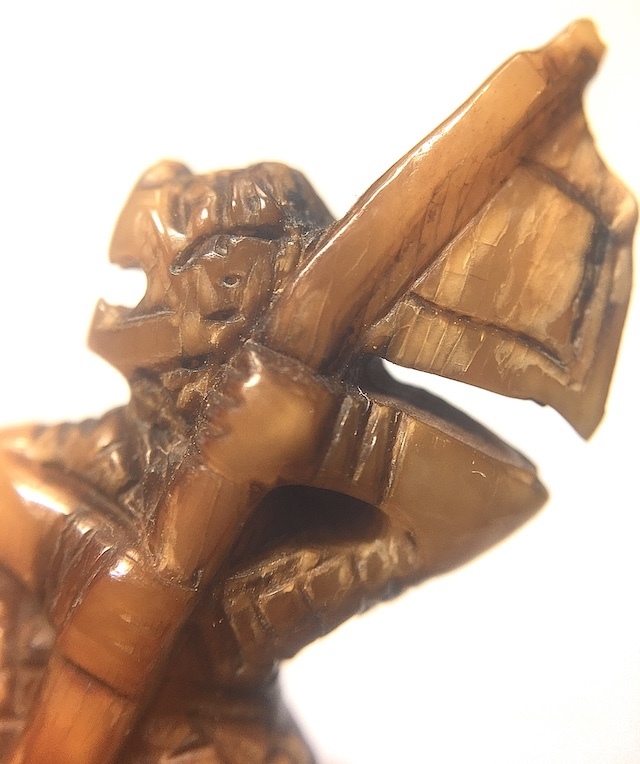 Luang Por Derm did not study much at school during his childhood, but after he ordained into the Sangha as a Buddhist Monk, he gave intense efforts and great interest to learn Bariyatti Dhamma (Theoretical Dhamma) with Luang Por Chom the then Abbot of Wat Nong Po at that time. He never stopped practicing and studying the various aspects of Dhamma Practice, Vinaya, Wicha Akom (Sorcery) and Lekh Yant Agkhara Khom, which He studied with Nai Pan Choo Pan, who was an Adept Sorceror who was resident within the enclave of Wat Nong Po Temple. Nai Pan was a direct looksit of Luang Por Tao of Wat Nong Po who was an ancient Master Sorceror and Abbot of Wat Nong Po. He studied for seven years with this Master Sorceror, until his passing, and recorded the facts for posterity. 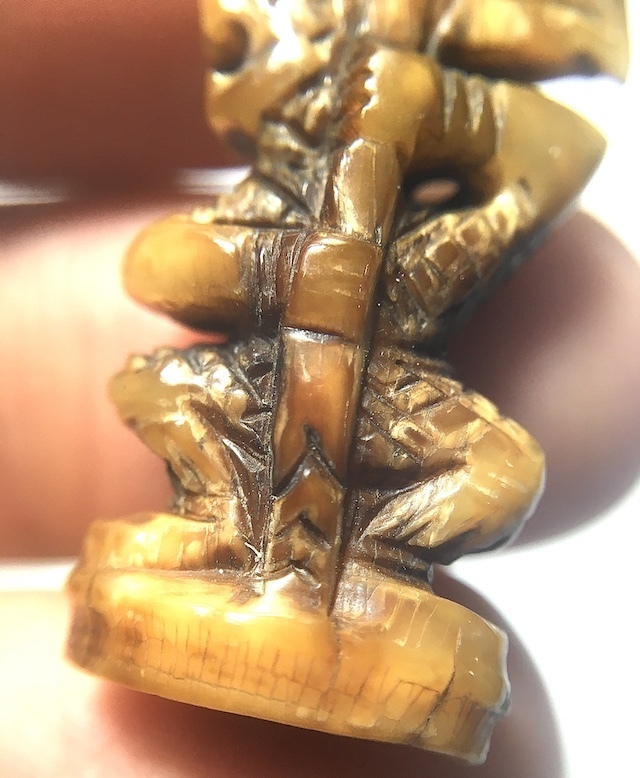 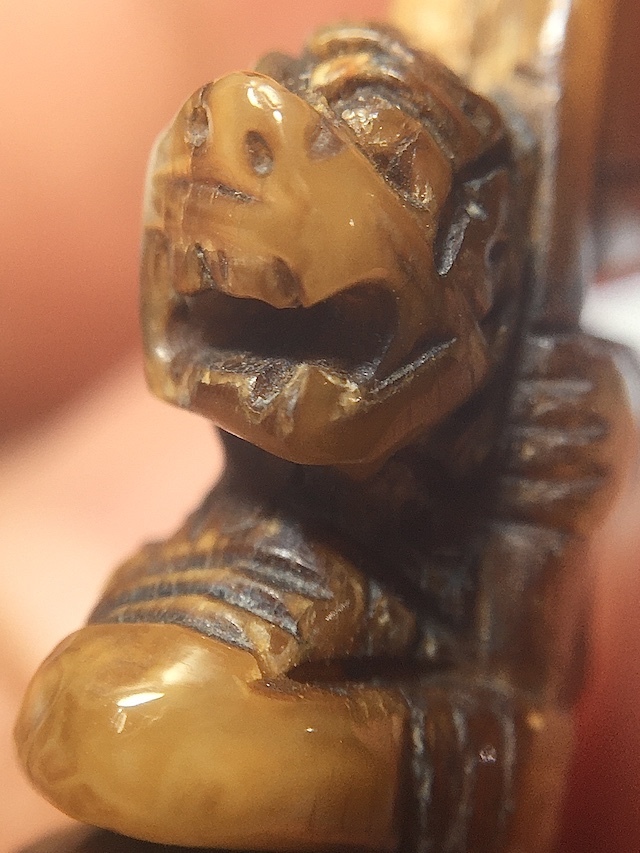 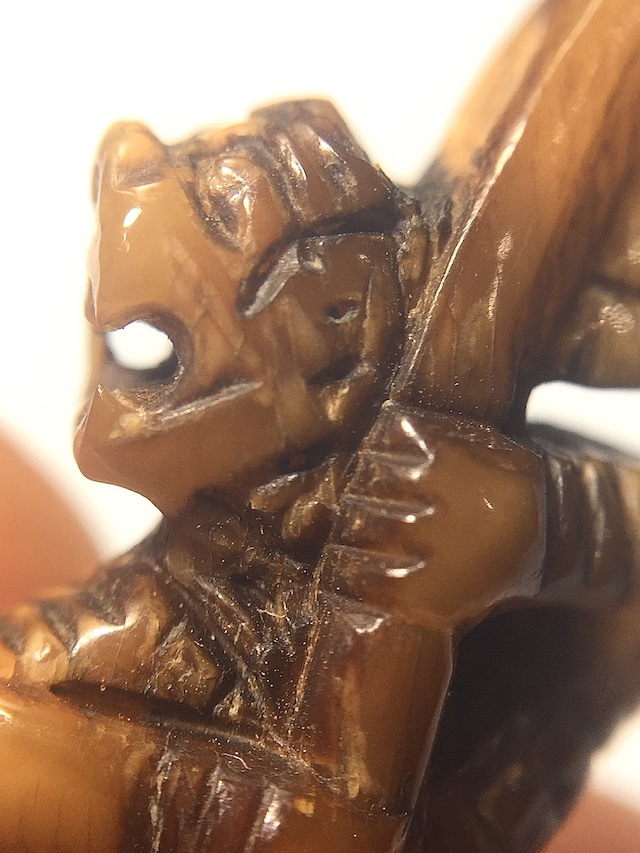 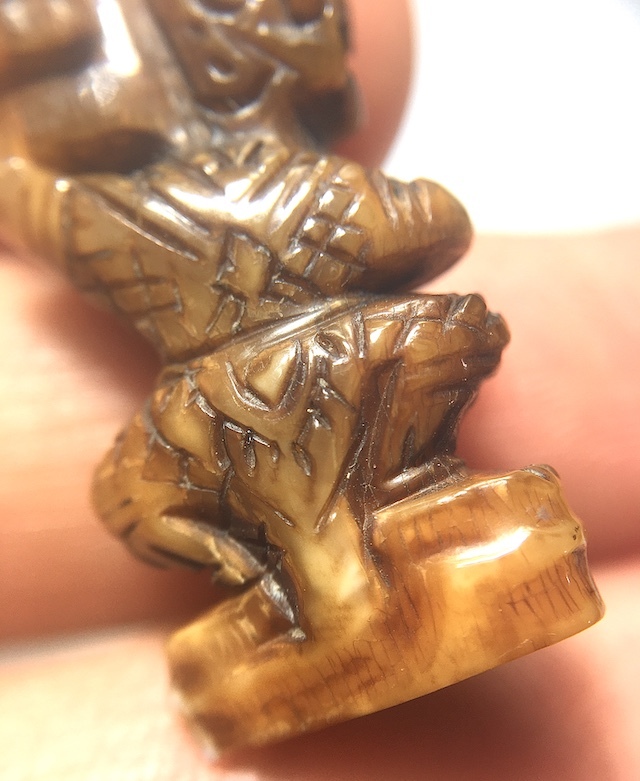 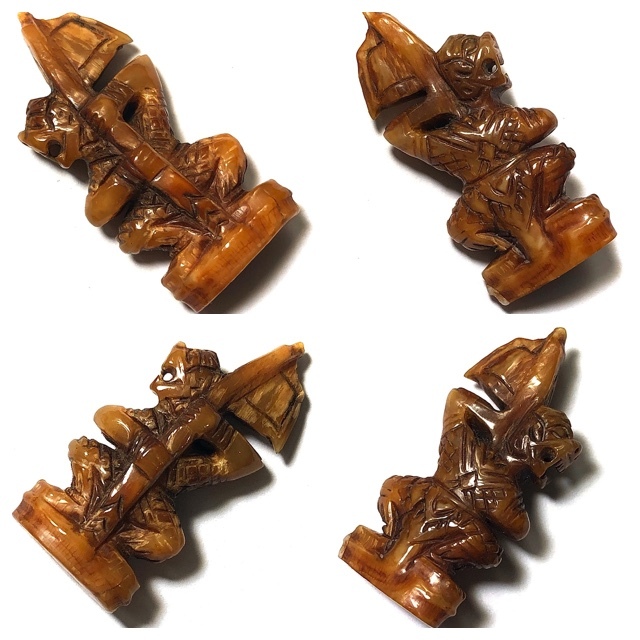