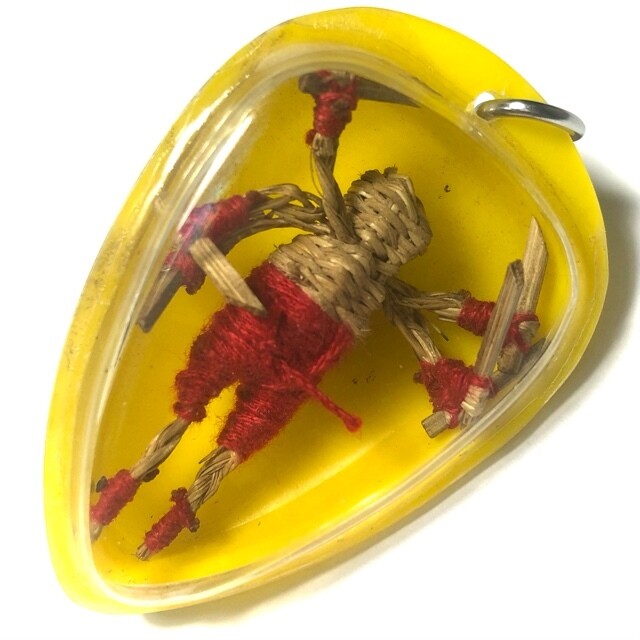 Standing version of aan amulet that is immensely rare, and immortally famous Animist Spirit Charm amulet; The World Famous Hun Payont Hyaa San Mad Daay Daeng Akom Dtua Kroo (Dtua Yern - standing on guard version) of Ajarn Loi Po Ngern (Ayuttaya Master and direct lineage continuance of the Wicha of Luang Por Glan of Wat Prayatigaram (Ayuttaya). This version is a large Dtua Kroo, measuring 6 x 4 Cm, and is in pristine condition. The Hun Payont of Ajarn Loi (lovingly known as 'Mor Loi'), are said to be the number one Hun Payont amulets of all time, and are the most sought after and desired items by devotees of this kind of amulet. 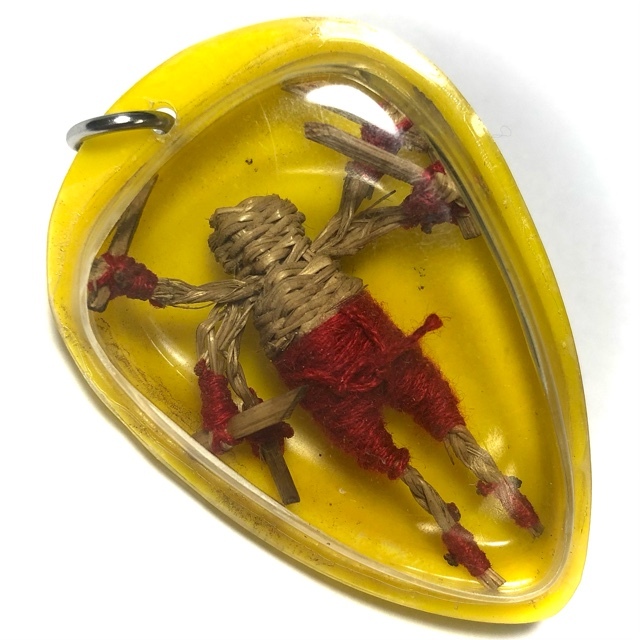 Unfortunately, the amulets of this great olden days Master, inheritor of the Wicha of Luang Por Glan Wat Prayat, and Luang Por Bpaen of Wat Sao Tong Mai, are so very hard to find in the present era. This exhibit has a hole drilled in the front of the casing, for dripping droplets of liquor to empower, or to offer a drop of consecrated oils once in a while for Bucha, and strengthening the power of the Hun Payont, and its emanating magic. 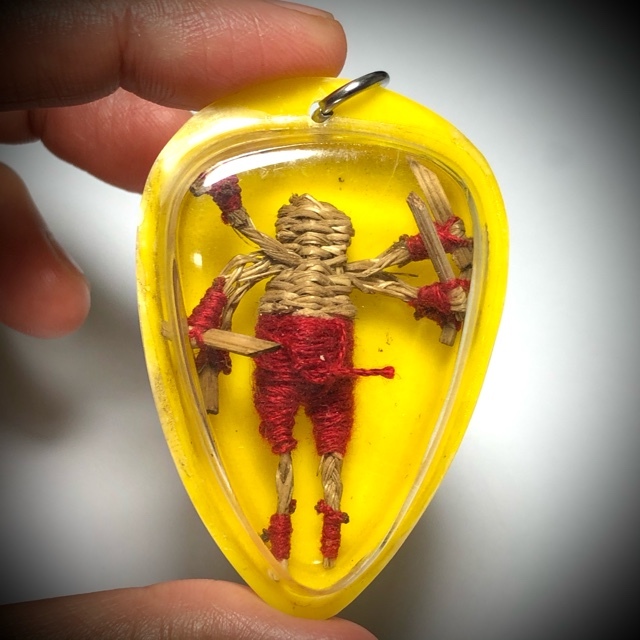 Ajarn Loi was born in the month of February 2454 BE, in Nakorn Sawan, but later moved to live in Bang Prahan in Ayuttaya. He became a Novice Monk when he came of age, and the apprentice of Luang Por Glan of Wat Prayat. After the passing of LP Glan, Ajarn Loi continued his practice of Magic with Luang Por Bpaen of Wat Sao Tong Mai in Ayuttaya. Ajarn Loi learned many Wicha with Luang Por Bpaen, who was not only well versed in Wicha Saiyasart, but was also Adept in Artisanry of the Chang Sip Moo Fine Arts level of prowess. He thus taught Ajarn Loi all of his Wicha, and methods of weaving the spellbound Hun Payont, Takrut and other amulets in the finest fashion. 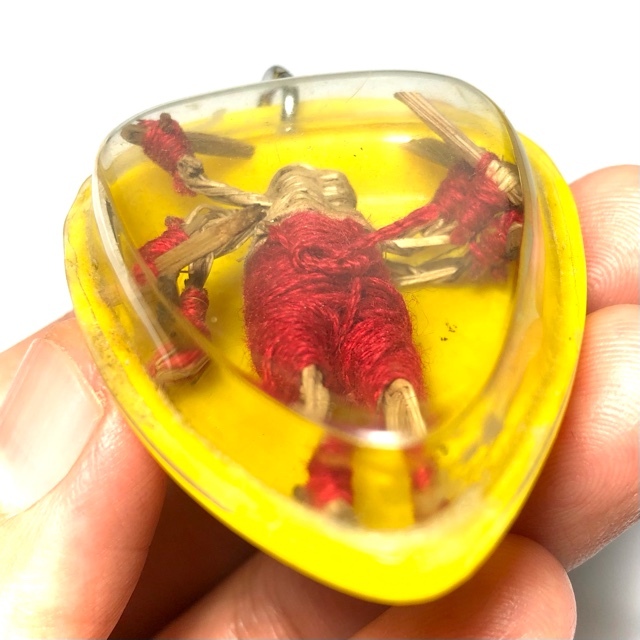 One must say that Ajarn Loi's Hun Payont, and other amulets all attract the eye with their fine artisanry and filigrain attention to detail and ritual accuracy. LP Bpaen was alsop the Kroo Ba Ajarn of Luang Por Suang of Wat Chee Ba Khaw, who was also a close friend of Ajarn Loi. After the passing of LP Bpaen, Pra Ajarn Loi moved to stay at Wat Panan Cherng. Ajarn Loi knew many methods of Astrological Foretelling, Spiritual healing, and Powerful Amulets and Spells. 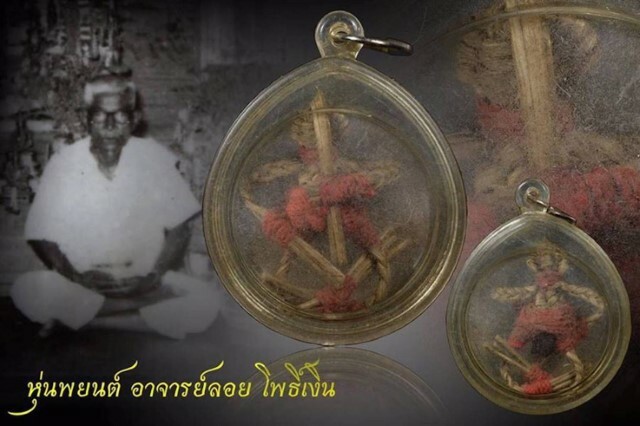 Because of this, he soon became the object of jealousy from the other monks, which he could sense strongly that he was making them feel inferior. So he moved away to not cause any inauspiciousness, and disrobed to become a Lay Master, and moved to stay at Wat Jeen temple. He later moved to Wat Suwandaoraram, where he remained practicing his path, and serving his devotees up to the day of his passing. 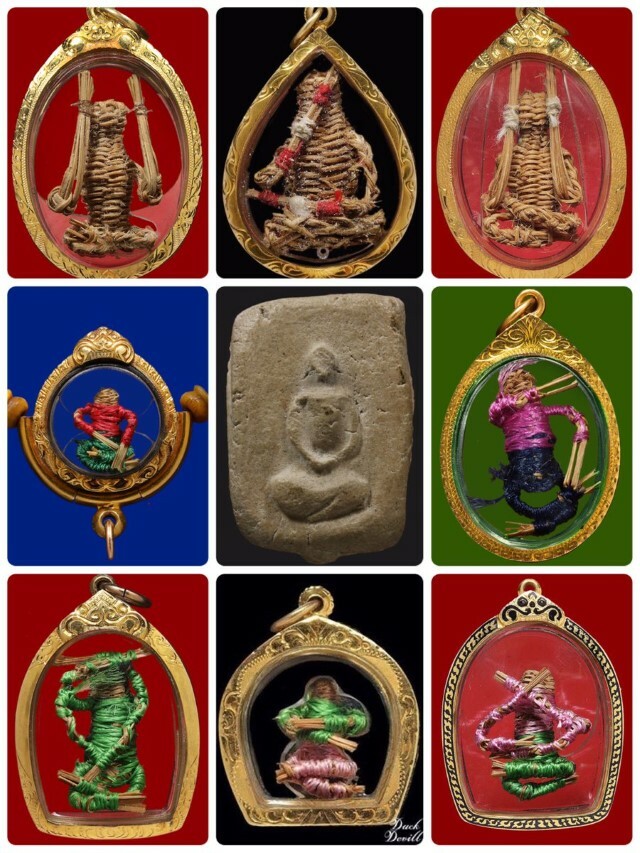 The Hun Payont (or 'Hun Payont'), is an ancient reanimated Golem effigy, with far back reaching roots. Its name comes from the word 'Payont' which means an effigy that has been brought to life by Sorcerous Magick. Hun Payont may be made in various forms, such as the form of a Human, or some other Magickal creature, or animal, depending on the needs of the user and intended uses of the Adept who makes them. 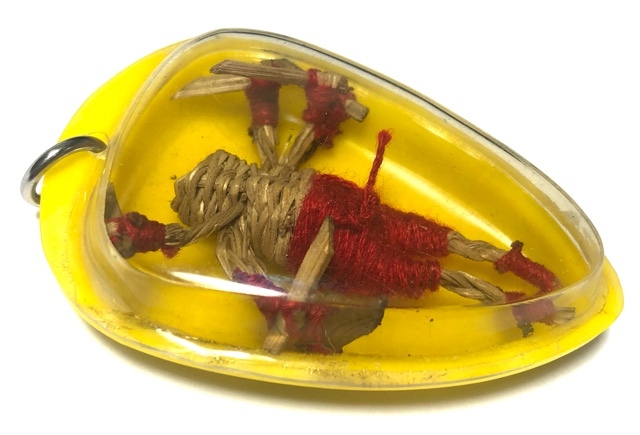 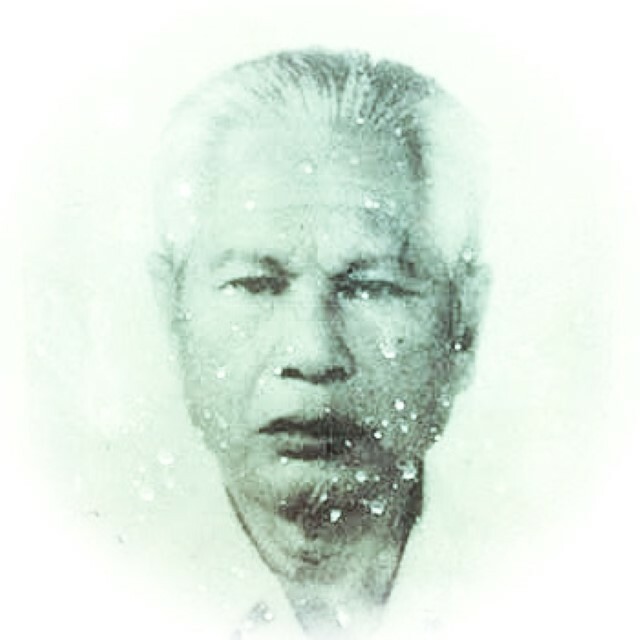 The Hun Payont, is an amulet that is found to date back to the times of the Kassapa Buddha. The Kassapa Buddha, is said to have made a Payont effigy, to protect his Relics, before he himself passed into Nibbana. 200 Years Later, King Asoka opened a shrine, to remove and preserve the relics, but the shrine was inhabited by a Hun Payont. King Asoka was forced to invoke and summon the God Indra, who manifested as a Brahman, and performed Incantations, enabling King Asoka to enter and remove the Saririkadhatu Relics. 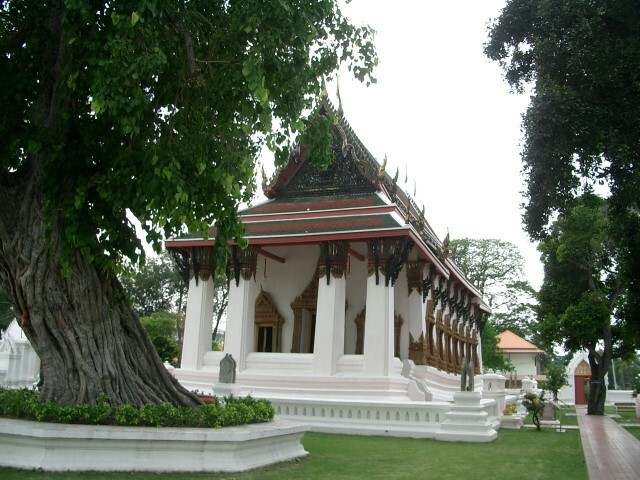 In the world of Sorcery, all lineages believe in the existence of different kinds of spirits, which can imbued within effigies or controlled, or beseeched to perform a multitude of tasks. There are many Animist and Necromantic amulets which use different types of spirits which are Hoeng Prai Ghosts, Devas, Bhuta, Kumarn Tong, Rak Yom, In Jantr, Phu Some, In Gaew, Mae Takian, Ma Hoeng Prai, and many others such as Yaksa Monsters, to inhabit an effigy. Great Adepts are the only ones able to create Hun Payont Golem Effigies, which are then brought to life with Necromancy and imbued with any of a number of kinds of spirits, depending on the nature and needs of the devotee, or the intentions of the master. 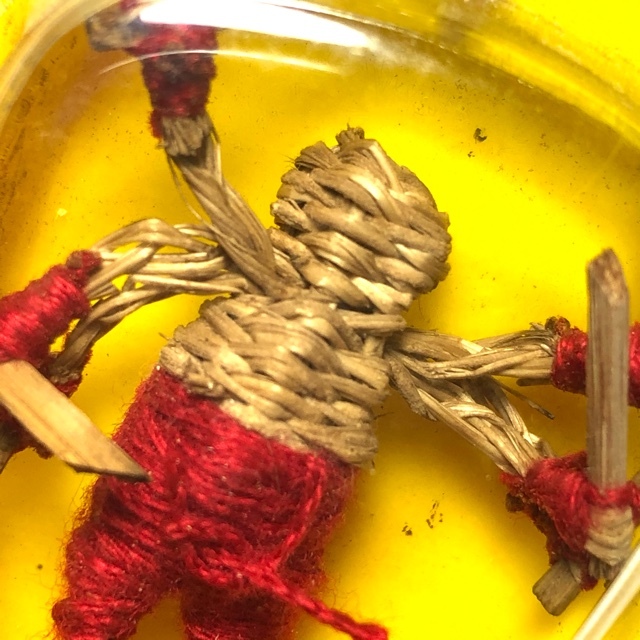 All Hun Payont Golems, must be empowered by an Adept, who has Mastered the Wicha Akarn Sam Sip Sorng; 32 invocations of the 32 elements within a living being, to make the effigy able to displace itself (move around), and to emit Magical powers, protecting wealth and possessions within its enclave. If intruders enter, the Hun Payont will create illusions that drive the thieves away, and will also scare away all kinds of demons and ghosts that enter the household to cause any havoc. Hun Payont are very protective of the belonging within the home and for this reason excellent guards. 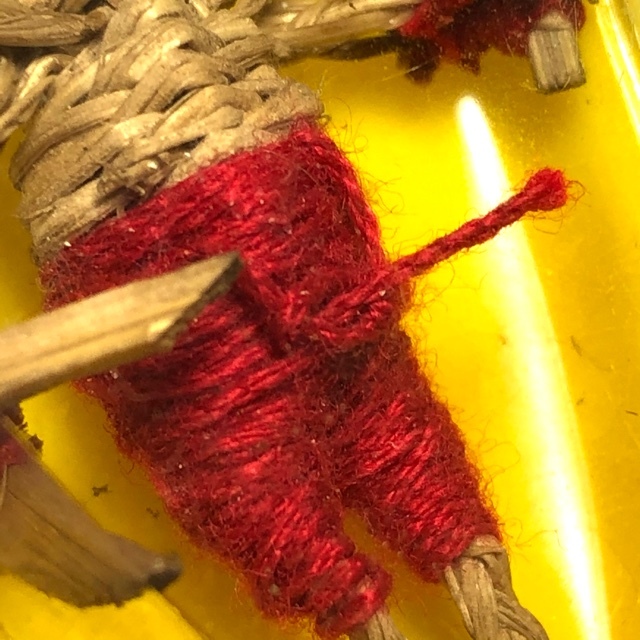 The Hun Payont is used by those who believe, in the household, place of business, and even carried as an amulet or placed in one's vehicle, to keep away alll dangers and inauspicious events and malicious entities. Hun Payont should be rewarded or appeased through Bucha with the Piti Gruad Nam Water Pouring Ceremony, in the same way as seen by Thai Buddhists after giving alms to the Monks, except that it is you who makes the prayer. 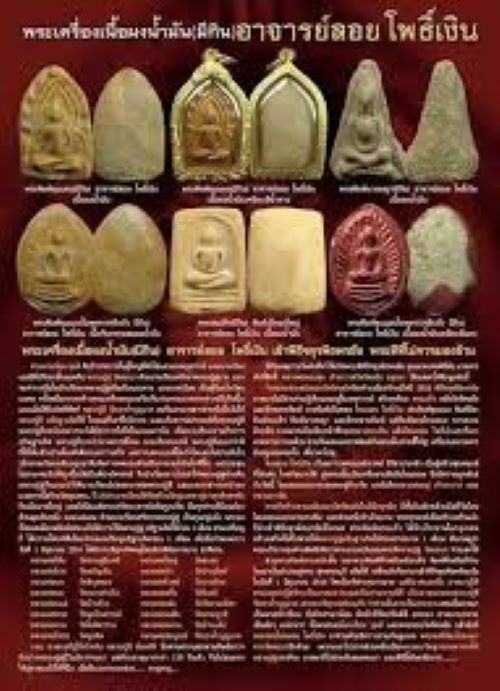 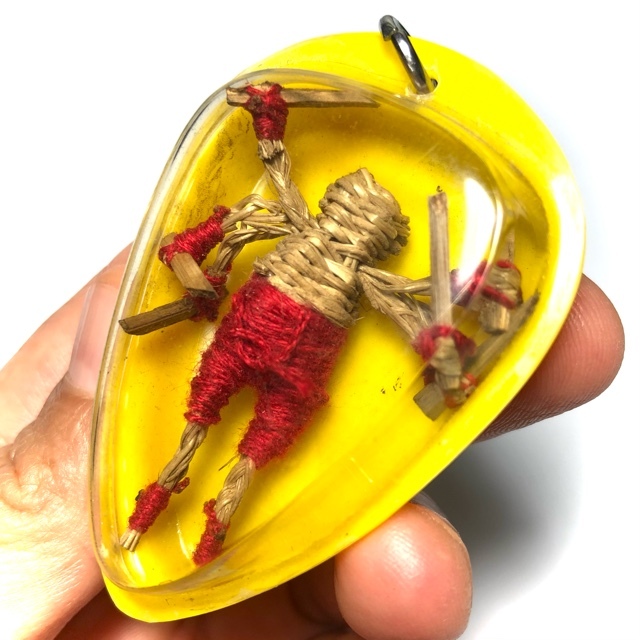 Alternatively, one can also use sacred or aromatic oils for consecration, or even liquor if wish to use for powerful Magic for Gambling and other matters of high risk. This is done, by laying down the amulet flat, and putting a few small drops of liquor or Prai/Aromatic Oil through the small hole drilled into the center of the window of the front of the casing, to fall onto the Hun Payont. 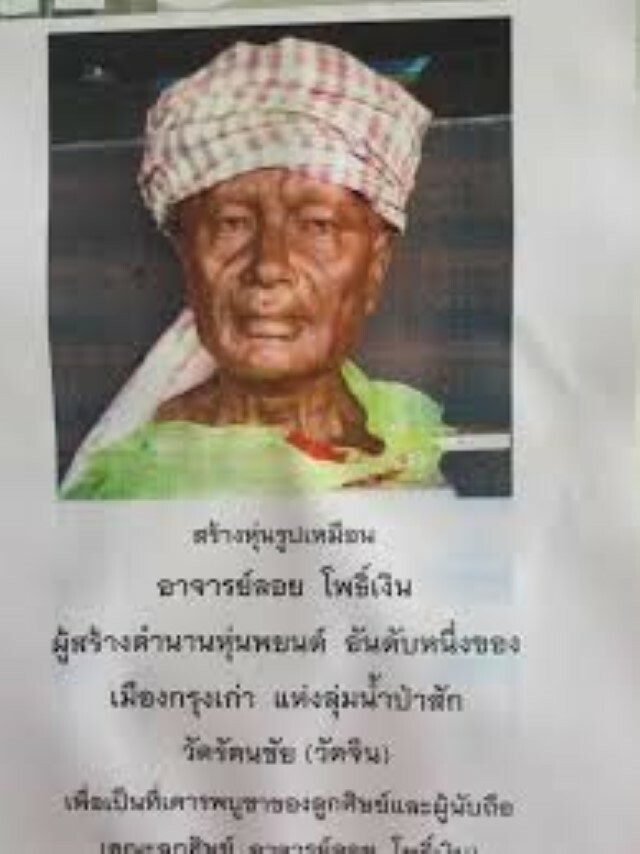 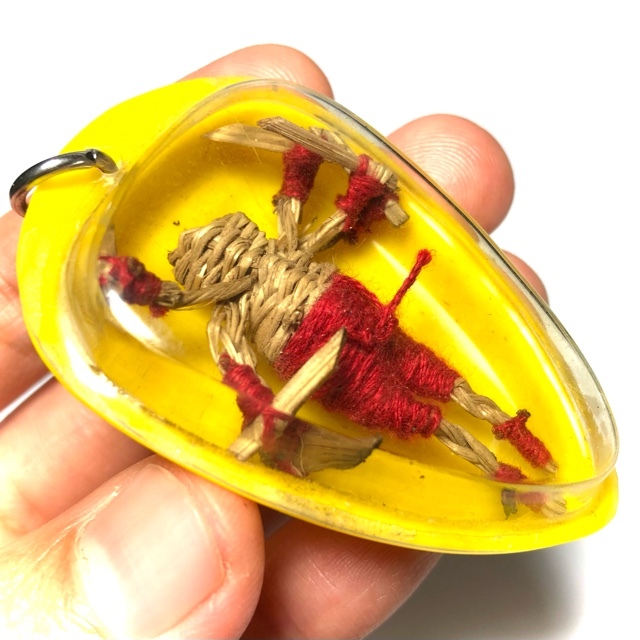 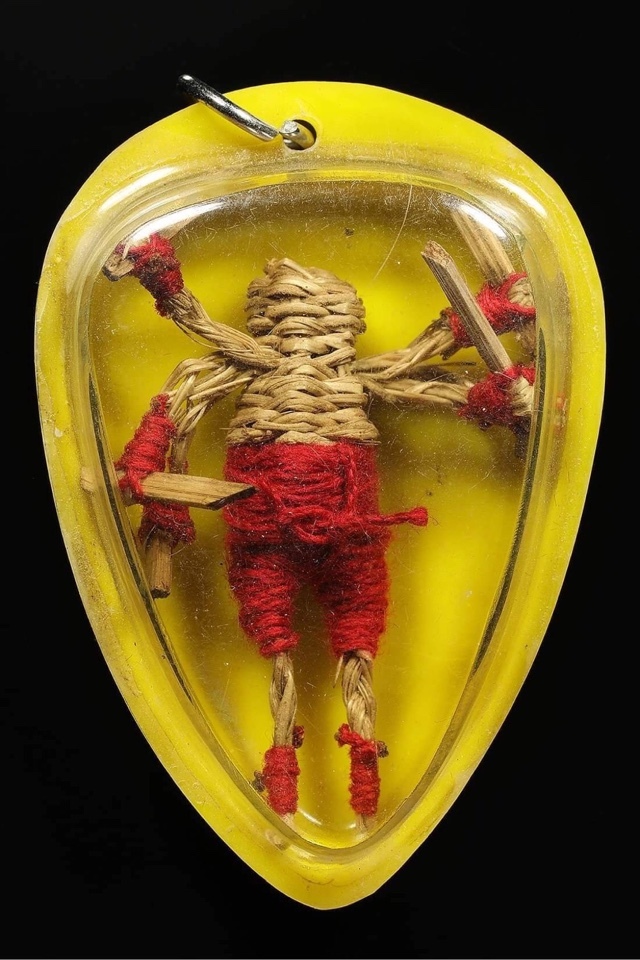 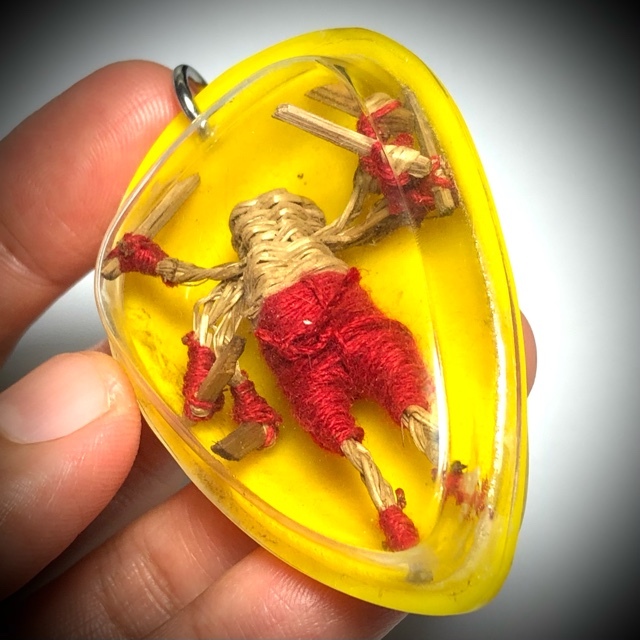