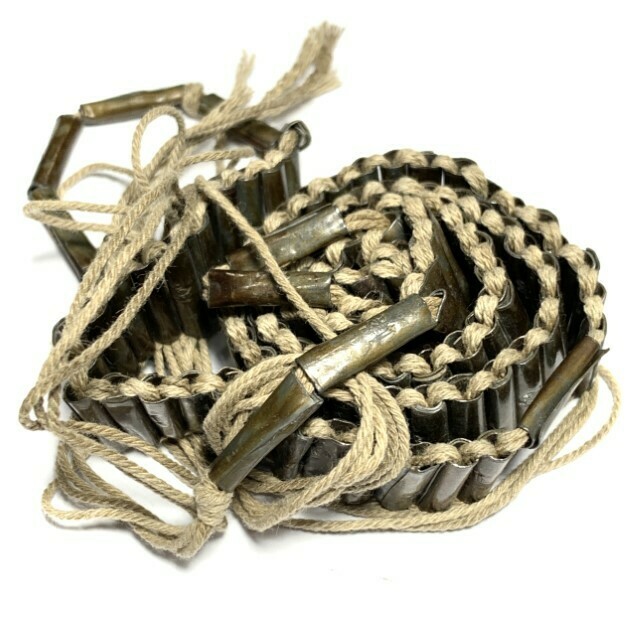 04145
$599
Out of stock
1
Product Details
Temple: Wat Laharn Rai
Year of Issue: Circa 2515 BE
Maker of Amulet: Luang Phu Tim
Weight: 120 Grams
Recommended Uses: Invincibility and Commanding Power,, Evade Deadly Accidents, Increase Status, Increase Wealth, Good Business
Size of Amulet: up to Circa 34 Inch waist
Material: Taakrut scrolls on Sacred Daay Dtra Sangkh Sinjana Cord belt
Additional Info: An extremely rare Talismanic Amulet from this Master, that is unlikely to be seen repeated in thee store, or to be found easily anywhere at all, making this exhibit aan extreme essential rarity for avid devotees and collectors, as well as a powerful Talisman for those who seek the most powerful magic.

Sacred cord belt with a plethora of hand inscribed and code stamped individual Takrut, with Code Sala embossed on each Takrut, from the Late Great Luang Phu Tim Issarigo of Wat laharn Rai. Released around 2515 BE in the 'Chud Pi 15' series, this item is extremely rare due to the immense work required to create such a massive amount of Takrut, with individual inscriptions, and Sala code stamps, and empower them individually. 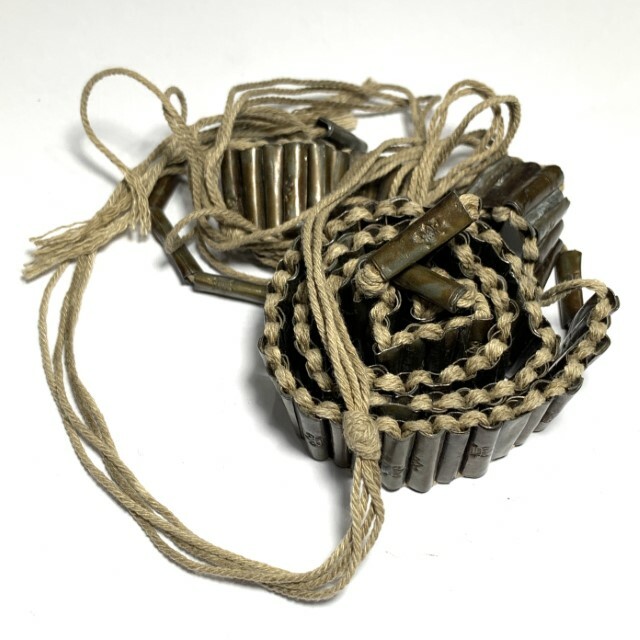 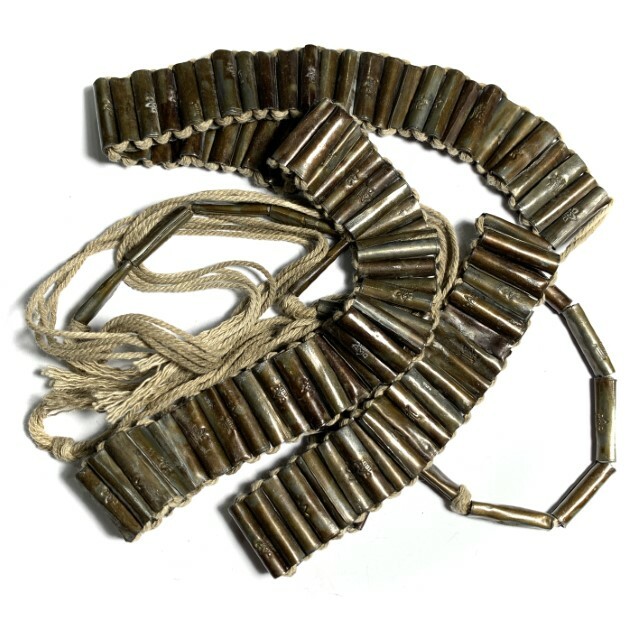 Luang Phu Tim Issarigo was renowned during his day, and remains renowned today as one of the top Master Monks in Thai amulet making history, and as the master of the Wicha Pong Prai Kumarn. His amulets are highly varied, and more extensive than ever thought before, now that the pantheon, has now become almost fully documented, and authenticated. Once seen as less known as the other famous Masters of his time such as Luang Por Horm, Luang Por Rung of Wat Ta Graber, and Luang Por Chern. 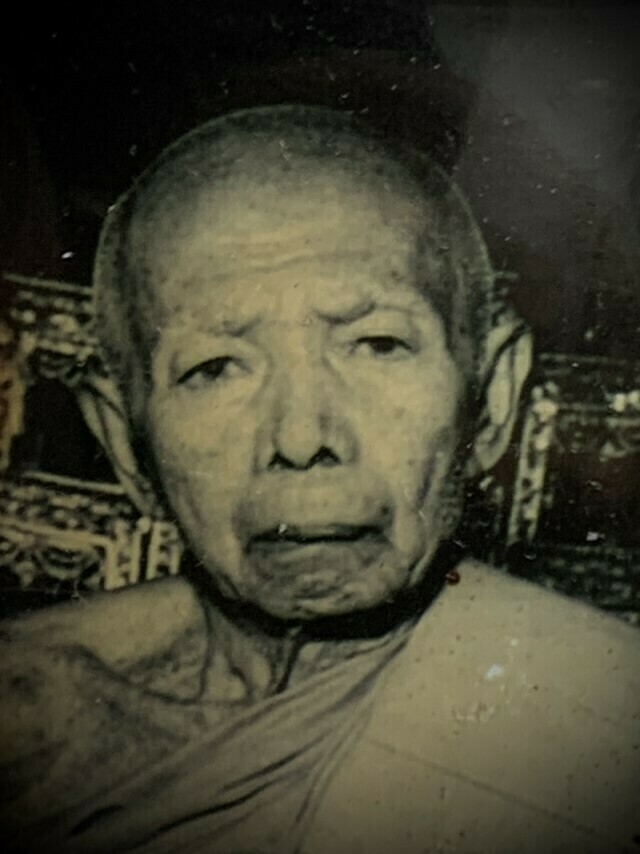 LP Tim soon became more popular and powerful as the tale of him being the only Master able to make an amulet rise up in a water filled almsbowl and start spinning around, when put to the test with the other great Masters, in a privately held competition. Once news of LP Tim's mastery leaked out, his amulets became very popular, and soon his Pra Pong Prai Kumarn became the most toasted and celebrated amulets for their power to change the fate and fortune of the wearer, and improve prosperity. 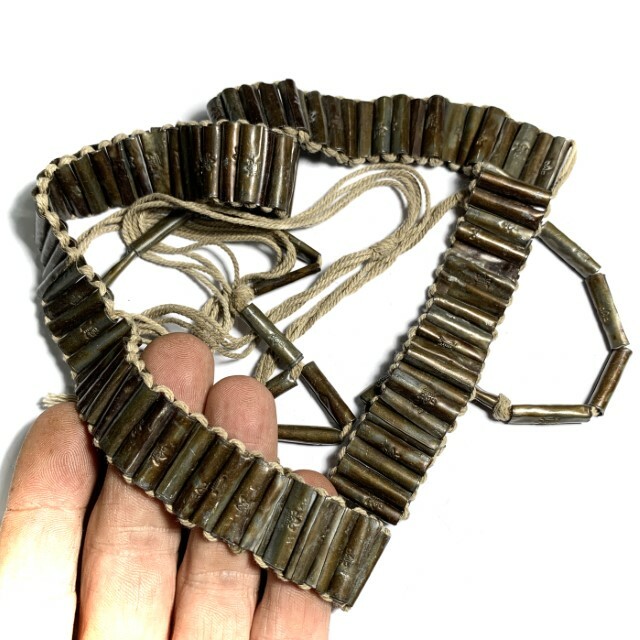 This was the cause that Luang Phu Tim, stands among the top 10 Guru masters of Thai Amulet History, This extremely rare and diligently empowered Takrut belt is a Talismanic Charm amulet, that can be highly recommended for its status increasing magic, protective energy, wealth increasing power of attraction, sacred value, and immense magical power, artistic appreciation, and collectorship value. 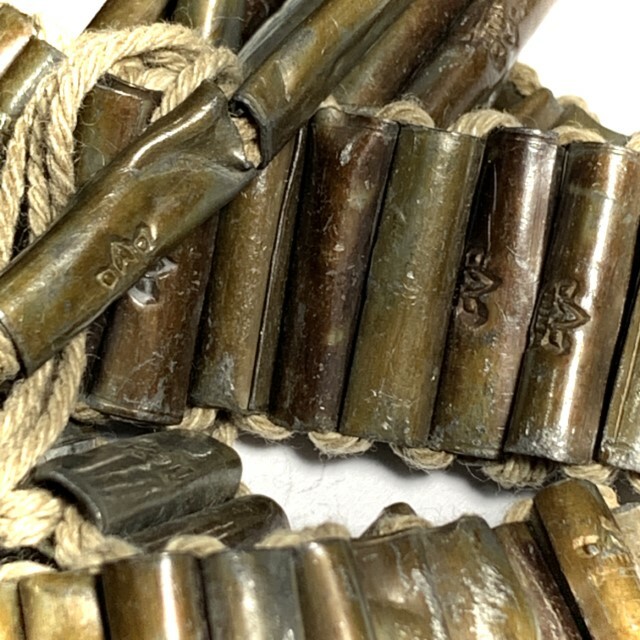 Luang Phu Tim Issarigo, is of course not only one of the most highly acclaimed and sought after Guru Monks for his amulets, he is the holder of the highest esteem in Thai Buddhist amulet history for Pong Prai Kumarn powders.The Sacredness of the Pra Pong Prai Kumarn is legendary and unquestioned in Thailand, and its magical power is commonly accepted by all, and are considered to be among the most powerful powders in existence. The reason the Pong Prai Kumarn amulets of Luang Phu Tim became so world famous and popular, even in the time when Luang Phu Tim was still alive, is because everybody who owned one, recounted that business, personal success and prosperity, had increased constantly and steadily, since wearing the amulet. 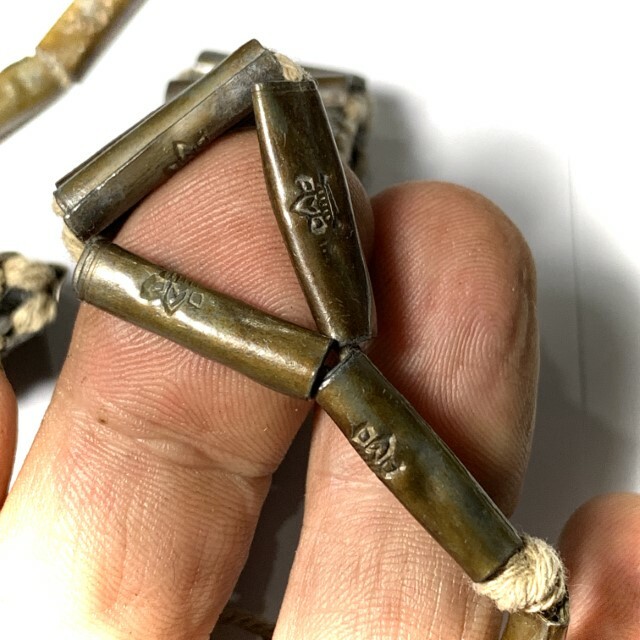 Luang Phu Tim, is Internationally Acclaimed, for his famous Pra Kring Chinabanchorn, his Pra Khun Phaen Pong Prai Kumarn, and Look Om powder balls. As to the classic 'Rian' Monk coin Image amulets which have become all time favorites, and eternally, world famous classic amulets of the high end category. The amulets of the Great Luang Phu Tim of Wat Laharn Rai, are among the most famous amulets of all time, and highly renowned for its true power to bring prosperity and good business, power of attraction and mercy charm to the wearer. 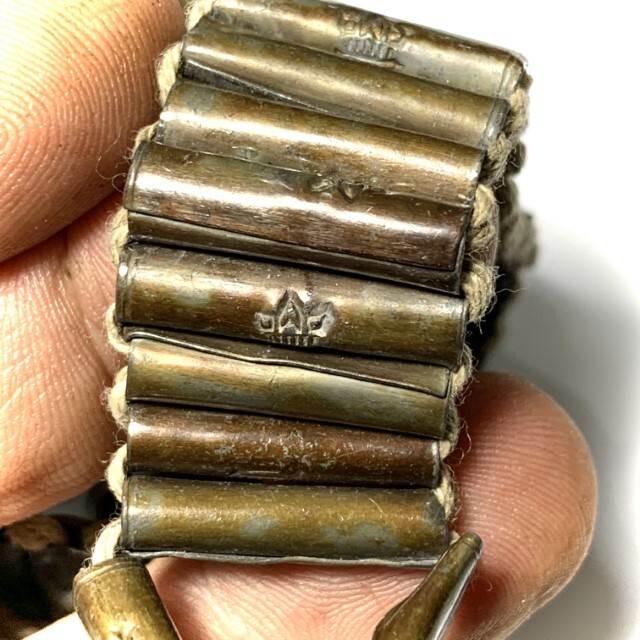 Each Takrut has a Code 3 stamp, from the Artisan Chang Pattana Bun Anugun, who made the code 3 stamp and code Sala for his Palad Khik design which he made for Luang Phu Tim, and the code stamps were then used further by Luang Phu, until their destruction around 2515 BE. Such a l;arge number of different amulets are all so highly recognized, prized and collected by aficionados, such as Luang Phu's Rian Jaroen Porn, and Rian Nakprok Paed Rorp, Rian Huang Chueam, Rian Mae Nam Koo, and Rian Sema, which are among the most highly sought after coin amulets of all. The Pra Kring Chinabanchorn amulet of Luang Phu Tim is of course also one of his most expensive of all amulets, and extremely rare to find, be it from the 2513, 2515 or 2517 Eras. 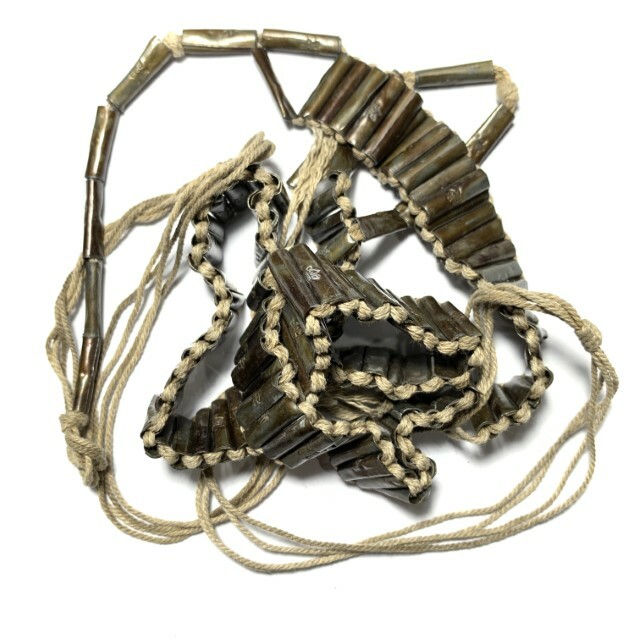 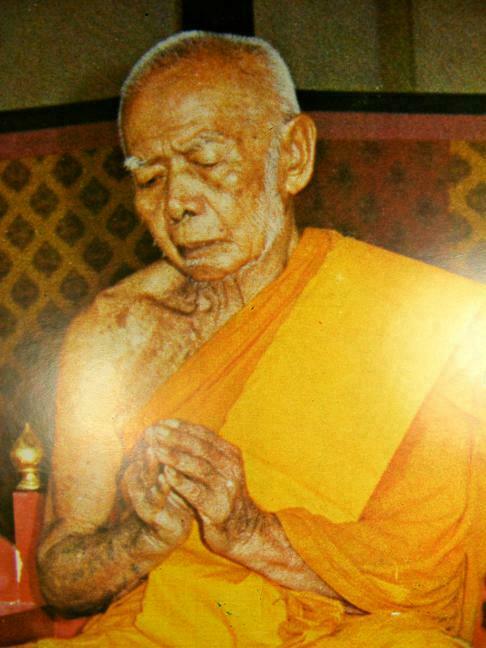 Below; A Podcast from Ajarn Spencer's 'Amulet Talk' Series, talking about the later, highly discussed, and now highly sought after top hit 2515 BE Edition Block 2 Pra Khun Phaen Pong Prai Kumarn, another top preferred and now number one amulet of the Muan Sarn Sacred Powders type amulets of Luang Phu Tim, since the "Block 2" 2515 BE series overtook the popularity of the 'Block Raek' 2517 BE series. 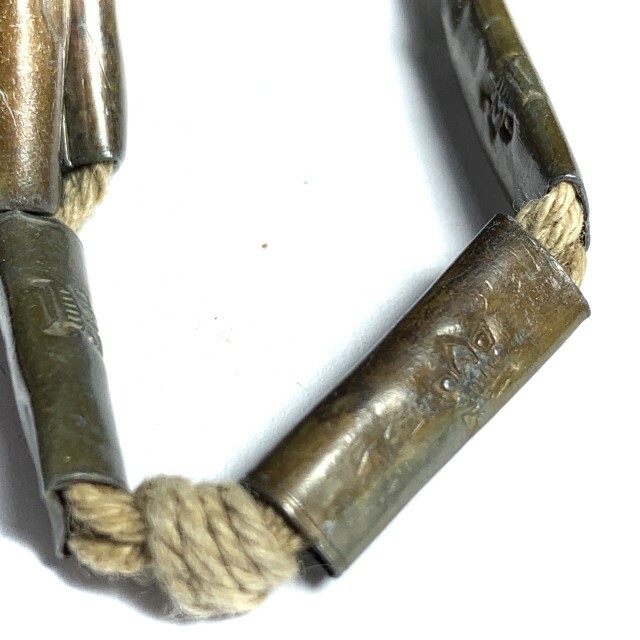 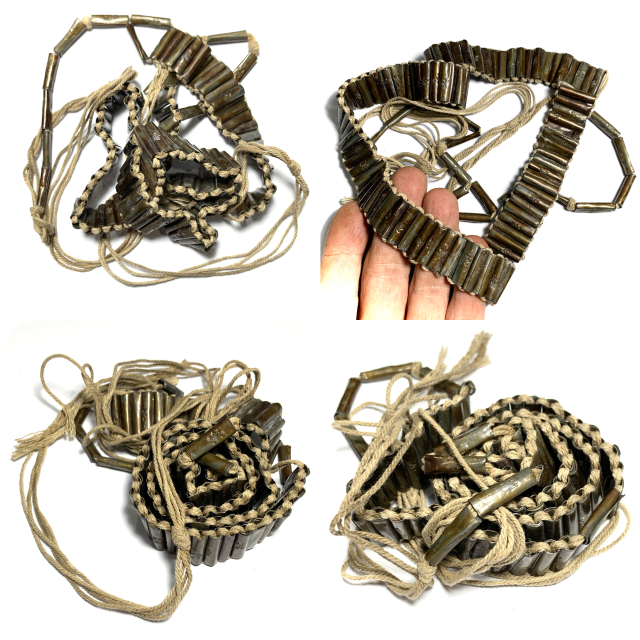