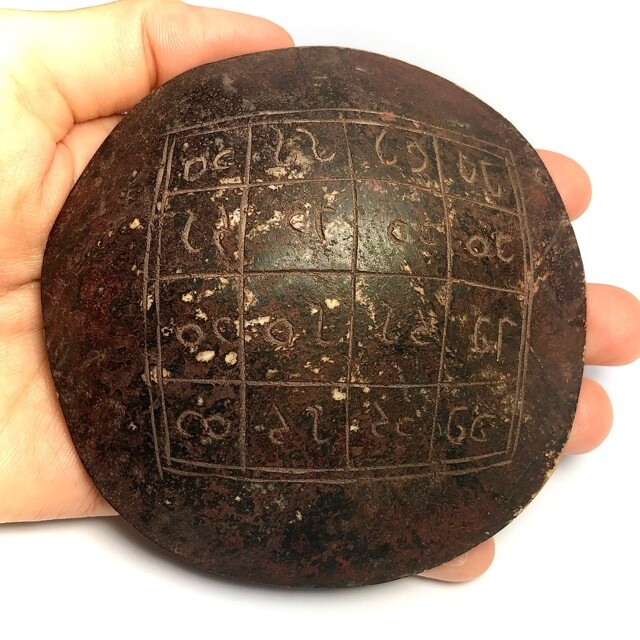 04305
$2,499
Free Express Shipping, & Option of Solid Silver Waterproof Casing Included
Out of stock
1
Product Details
Temple: Wat Tung Man Dtai
Year of Issue: Circa 2460 BE
Maker of Amulet: Kroo Ba Nanta Nanto Bhikkhu
Weight: 90 Grams
Recommended Uses: Improve Fate and Fortunes, Increase Status and Professional Success, Anti Black Magic, Auspicious Horoscope.
Number of Amulets Made: Kroo Ba Nanta only made individual Carved Amulets by himself, one at a time, or from his top artisans.
Size of Amulet: 10 Cm Diameter
Material: Carved Skull Bone
Additional Info: An extremely rare amulet from one of the Greatest Lanna Masters of Olden Days, whose amiulets coount among the most difficult to encounter anywhere. Highly Recommended for those who adhere to Necromancy, and Gamblers.

One of the rarest individual hand made ancient amulets of this Great Lanna Master, the Ban Neng Hoeng Prai Necromantic Skull Bone of a Hoeng Prai Ghost. This exhibit from Lanna Thai Yai Hilltribe Master Monk Kroo Ba Nanta, is a very ancient Ban Neng Human Skull-Bone carving of a Khmer Hoeng Prai Ghost, exhumed from the grave many many years ago in ancient times. Being so ancient, this exhumed Ban Neng comes from a Hoeng Prai Ghost from Ancient times, when Magic was at its most believed in and powerfully present in the world.

This skull bone carving is an immensely filigrain and finely detailed master class carving, with an ancient and exquisitely filigrain carved Spell Inscriptions in Aghkara Lanna Magical Script. This carving is so visibly, recognizable as having the inscriptions of the Great Kroo Ba Nanta, diligently inscribed with the highest level of prowess. The surface of the Ban Neng has been treated with Rak Chart Jeen Boran red herbal lacquer, in true Tha Lanna Sorcery style, which is a commonly seen method used by Northern Lanna People in their Magical Tradition. 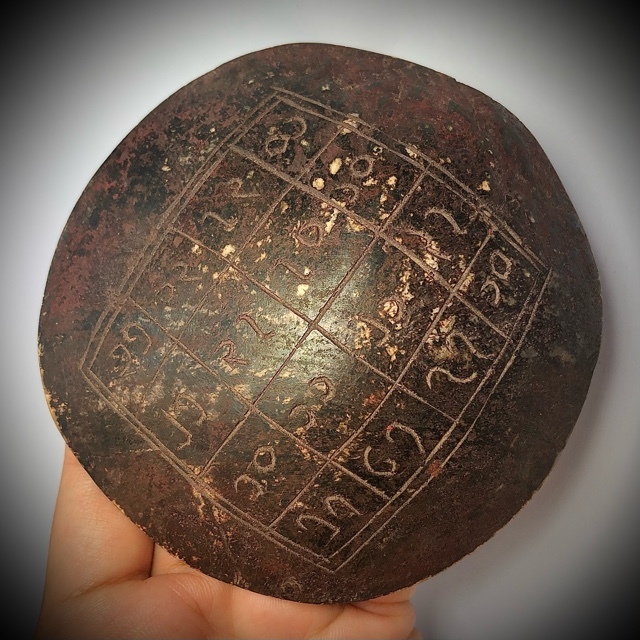 Free Express Shipping and the option of free solid silver Waterproof Casing is included with this item. An extremely rare, and exquisitely beautiful carving that is among the finest one could encounter by Olden days Lanna Master Guru Monk Kroo Ba Nanta Nanto Bhikku, of Wat Tung Man Dtai, in Lampang. Carvings of this level of fine detail, adherent to the ancient rules of the Dtamra of Lanna Necomantic Sorcery

This particular Ban Neng in fact, is beyond any kind of true price estimation (Hence 'Priceless'), for its beauty, spiritual and cultural value, & prowess of the inscriptions, with the immediately recognisably factors of an amulet of Kroo Ba Nanta, makes it a piece of fine art in itself, in a collector niche of 'The Man who has everything', that would not even blink to pay ten times what we would ask for this item. But we do not like the concept of traders offering different prices for the same item, depending on how wealthy the buyer is - we consider that fraudulent behavior, and unethical trader-attitude, same price for all with us. The price of an item such as this is not low in any case, so we see no reason why dishonest traders and those who sell to millionaires should 'bump up the price'. That is not necessary to succeed as an honest trustworthy trader. This is the philosophy of our curator Ajarn Spencer Littlewood.

Kroo Ba Nanta was the Kroo Ba Ajarn of Kroo Ba Lerd, of Wat Tung Man Dtai. Ban Neng Skullbone carvings are now truly a global rarity, and can mostly only be found as antiques from the Ancient Masters, althrough some years ago many lay masters began to revive the practice, which rose the attention of the government who noticed people beginning to become grave robbers to obtain skulls for making Ban Neng, and made a law to forbid the making of new age Ban Neng, and only accept antiques. Anyone now making them these days, if caught, is charged with criminal charges. It is hence very difficult to obtain this kind of powerful necromancy. The rear face reveals the pattern of the interior of a skull-bone, most probably that of a human or monkey. 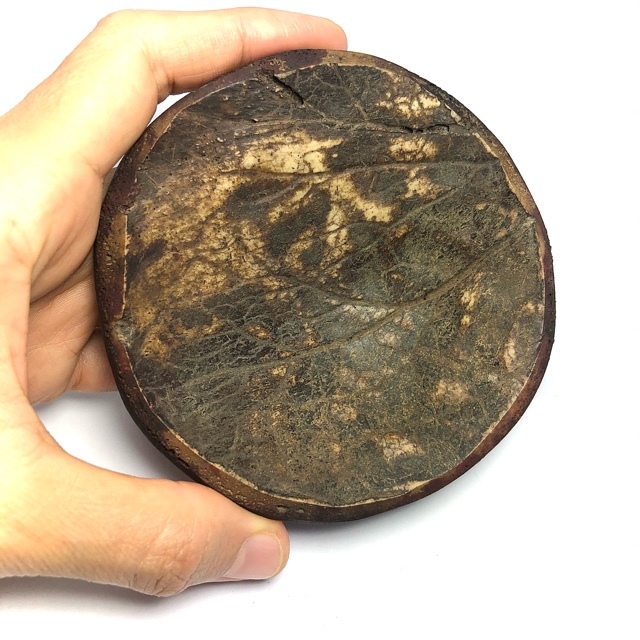 Free Express shipping Worldwide is included with this amulet. The Ban Neng of Kroo Ba Nanta is a very rare thing to come by, and is known for extremely powerful magic for Maha Lap and Maha Pokasap, Wealth and Treasure accumulation, Gambling to convince the Ghost of the Gambling Dens to Gaze in your Favor, and for Maha Sanaeh Power of Attraction to Seduce. This kind of Ghost, and of course all Ban Neng Forehead Bone Carvings, are highly revered by Business Owners and those who are in sales, as well as those who seek to turn their fate around with lottery wins or lucky windfalls. Kroo Ba Nanta was one of the Greatest Lanna Masters in Living memory, before whose time, little is known of the names of the Masters who lived, so long ago was his Era. 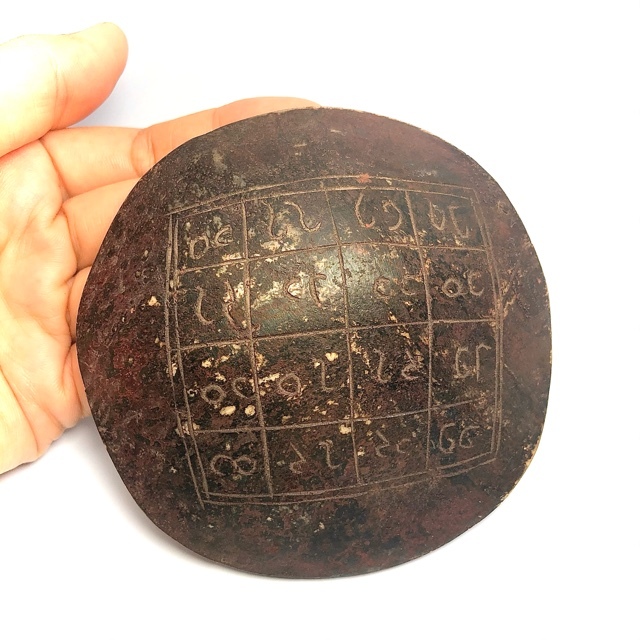 Because of this, and his constant absence on forest Tudong wandering, it is not known when Kroo Ba Nanta began making Amulets, nor how many he made, except that old people who lived during his time, say that he had made them as long as they could remember. Many different shapes and forms of amulet can be found, but only the well trained eye can recognize his style of art, and when found, the inscriptions, and the natural ageing process of the coconut shell, ivory, bone, wood or sacred powders he used to make the amulets. 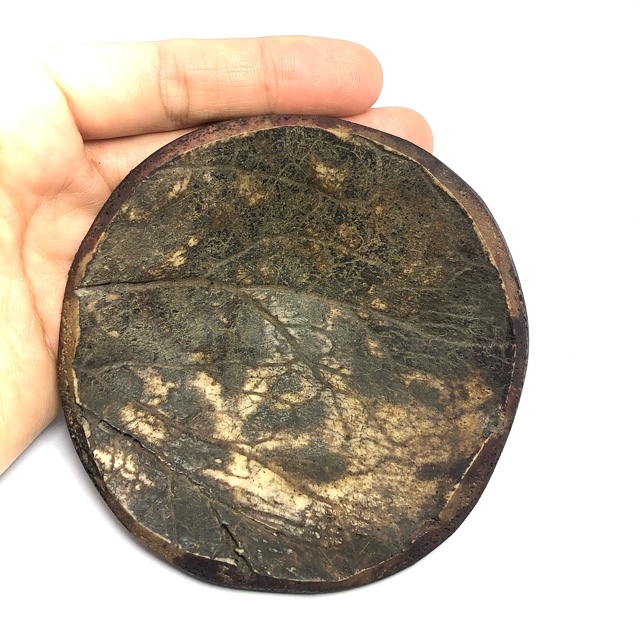 The earliest actual evidence of his making Ban Neng & Ban Nang Skull Bone, and famous Kala Ta Diaw one eyed coconut shell amulets, was found inscribed on a Kala ta Diaw Rahu Image from Kroo Ba Nanta with the year 2456 BE, which is considered to be one of his earlier one eyed coconut shell carvings.The amulet measures 5 x 4 Cm, and is made from one eyed albino coconut shell. Kroo Ba Nanta Nanto Bhikkhu was considered the older of the 2 Greatest Masters of the Wicha Pra Rahu of that particular Era, the other most famous Master being of course Luang Por Noi, of Wat Srisa Tong. 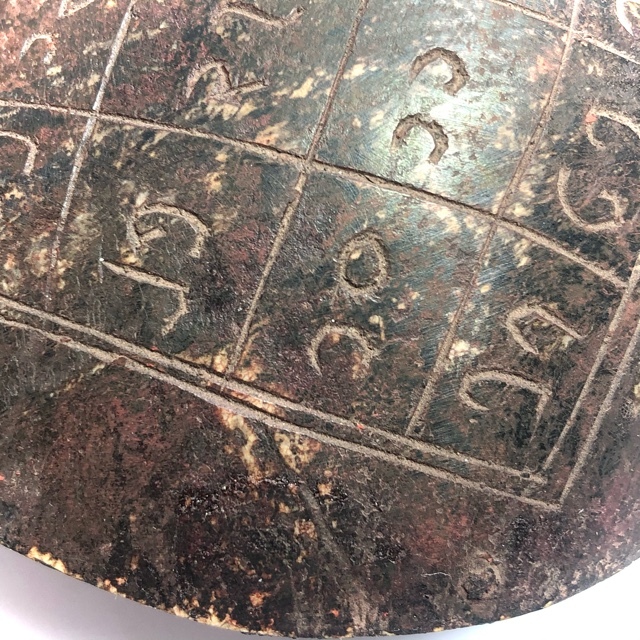 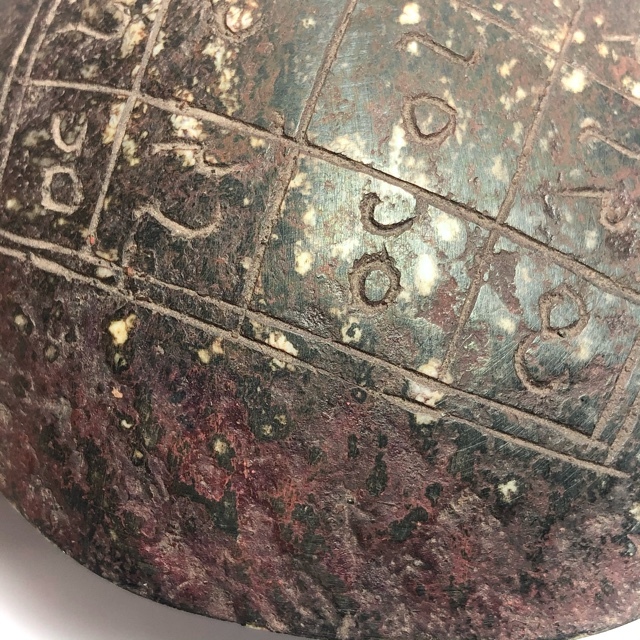 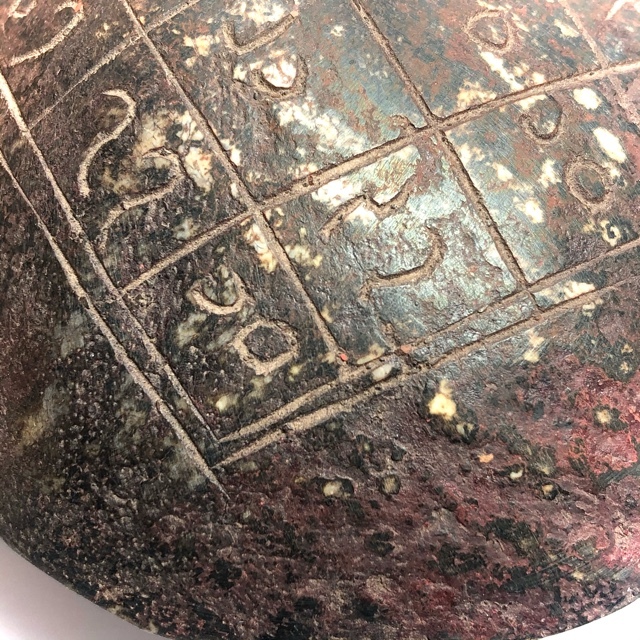 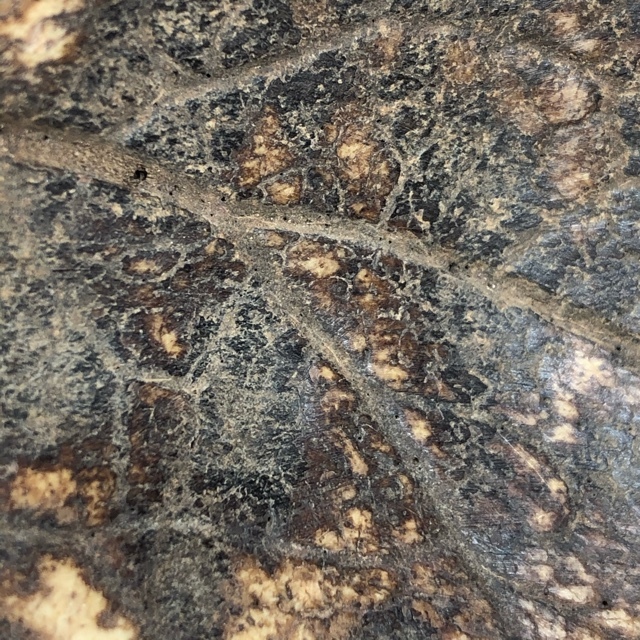 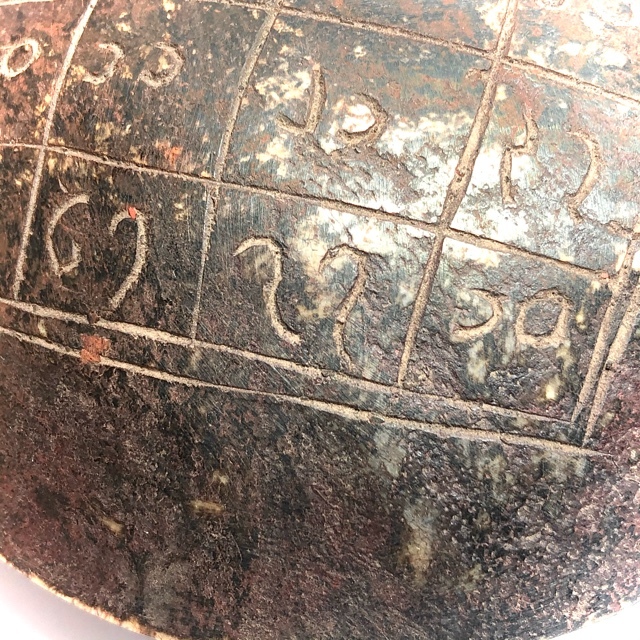 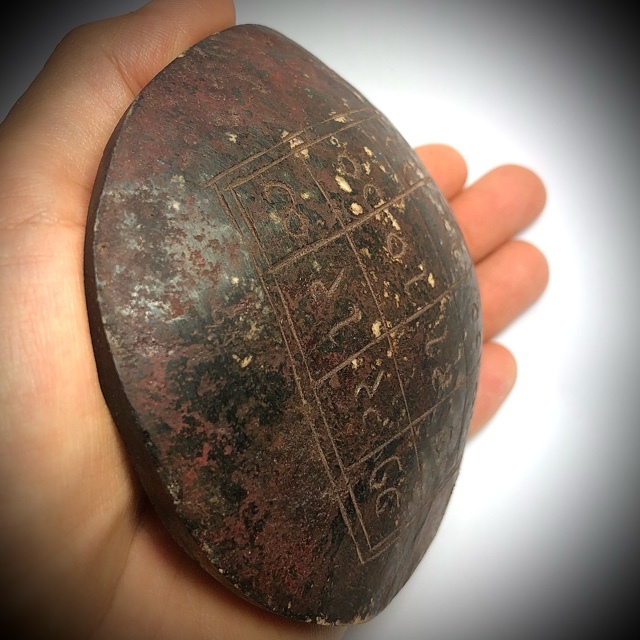 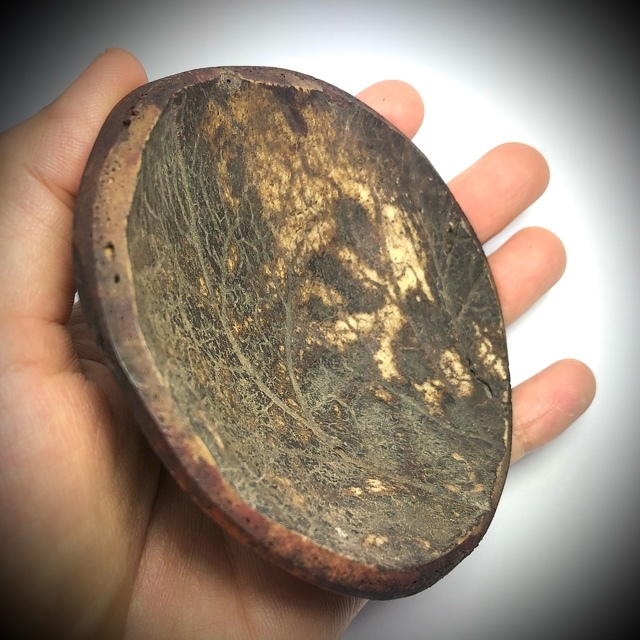 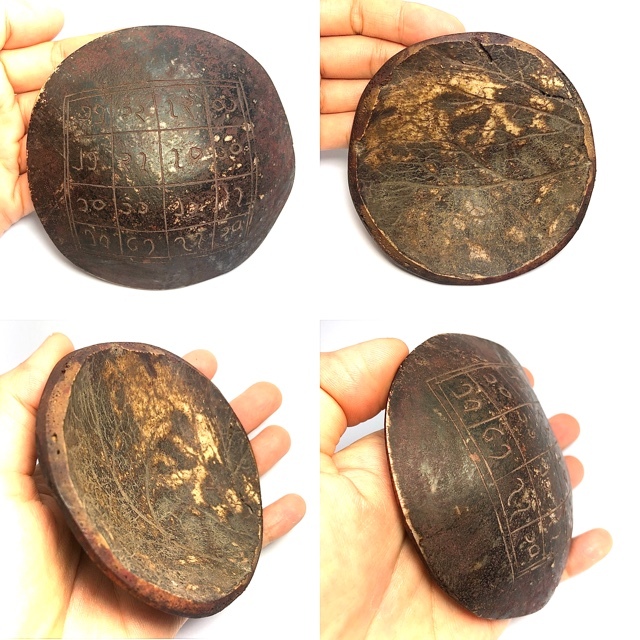