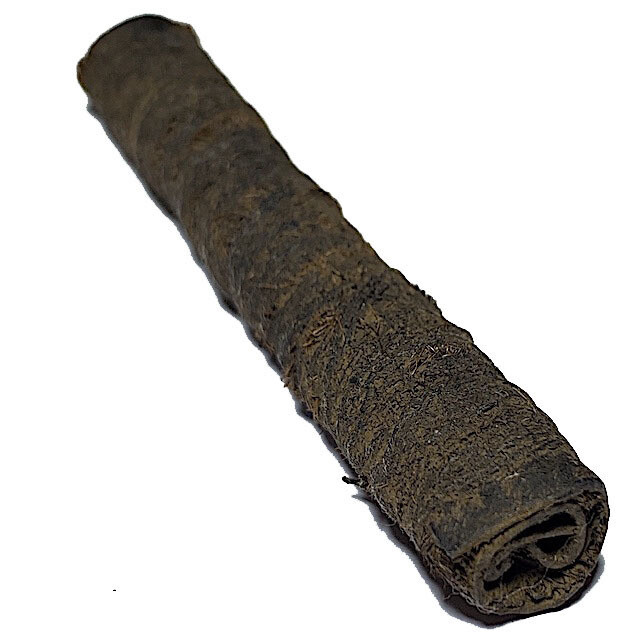 03933
$549
Out of stock
1
Product Details
Temple: Wat Bang Hia
Year of Issue: Circa 2450 BE
Maker of Amulet: Luang Por Parn
Weight: 6Grams
Recommended Uses: Kong Grapan Chadtri, Maha Amnaj (commanding power and influence), Klaew Klaad, Maha Sanaeh, Serm Yos, Metta Mahaniyom.
Number of Amulets Made: Luang Por Parn made each of his amulets as single items, empowered by his own hand.
Size of Amulet: 7 Cm Long x 1.5 Cm Thick
Material: Hand Inscribed Spells on Tiger Forehead Fur Scroll
Additional Info: One of the rarest kinds of animist talismans to find in this material from this Great Master, and a master-Class amulet that is irrepeatably attractive to seekers of Kong Grapan Magic 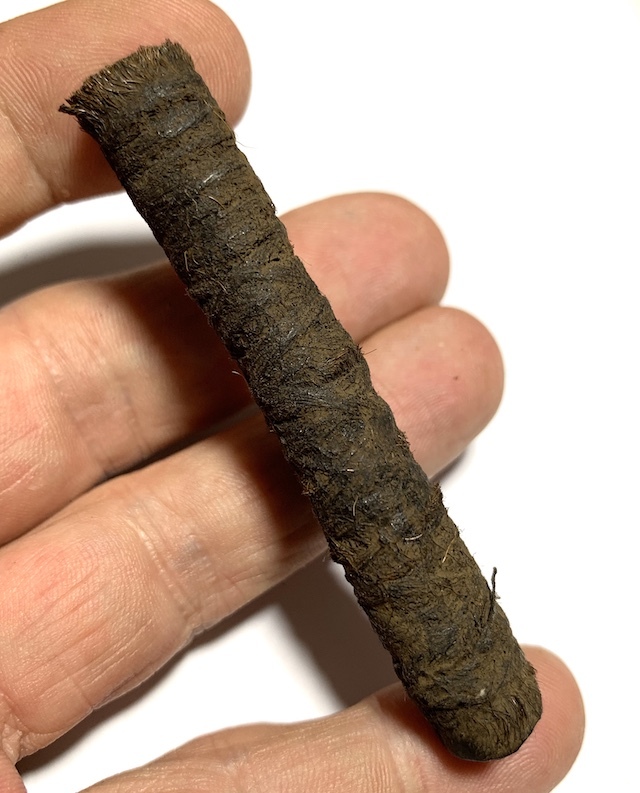 The Takrut is known since its very making, for its powerful Wicha Suea Maha Amnaj, for Commanding Power, with Kong Grapan Chadtri Maha Ud, for Invincibility against weaponry, Klaew Klaad Evasive Magic, and Serm Yos Status Increase and Promotion 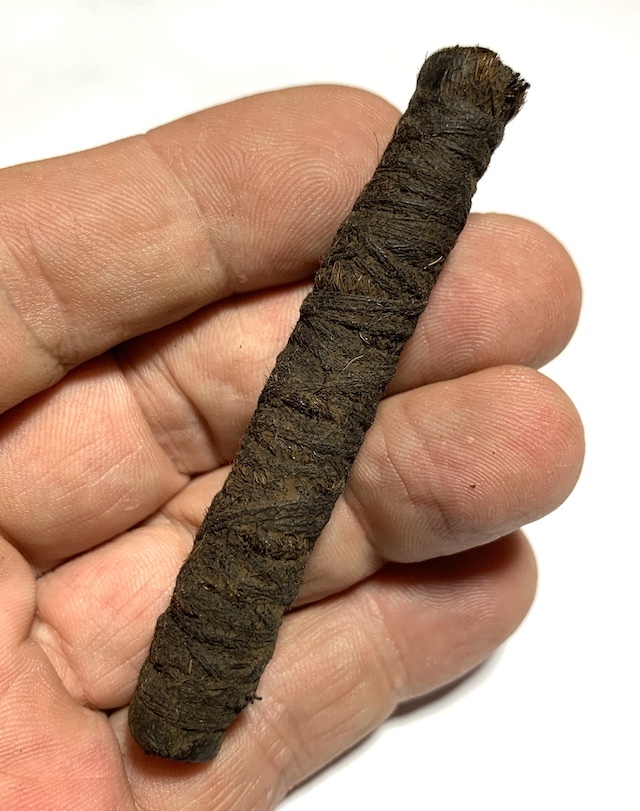 One of the rarest amulets to be found from the Great Master of Wicha Suea Tiger Magic, and Kong Grapan Invincibility Charms. Luang Por Parn, was abbot of Wat Bang Hia (later changed later to 'Wat Bang Bor', or officially named Wat Manghalakotawas, due to the double meaning of the word 'Hia' being potentially inauspicious).

The Takrut is a Top Master Class Kong Grapan Chadtri Maha Amnaj Talismanic Amulet of Immense Esteem in the Amulet World, and the Pride and Joy of any true devotee and collector, for its unquestioned power. 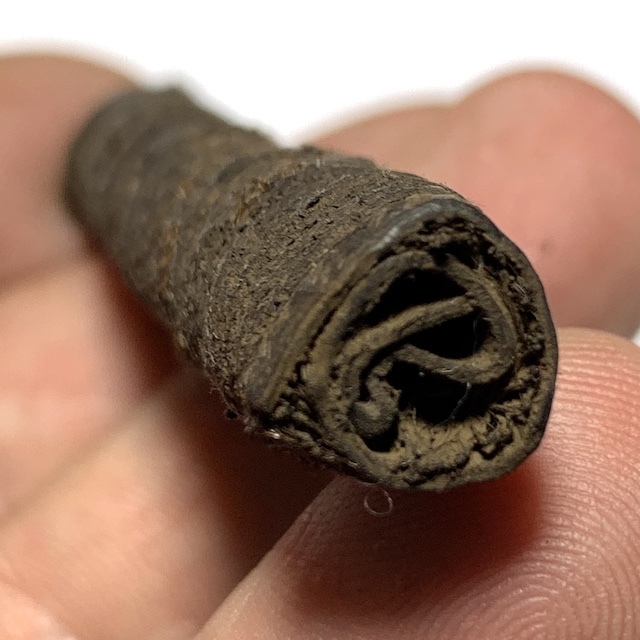 Free EMS Shipping Worldwide is included. The amulet has fur poking through the Daay Dtra Sangkh thread binding, whcih is visibly worn from natural aging through the many decades of time that have passed, and through contact with the skin of devotees, and is a most pristine example of a master class exhibit of the Takrut Hnaa Bpaag Suea Maha Amnaj Kong Grapan of Luang Por Parn. 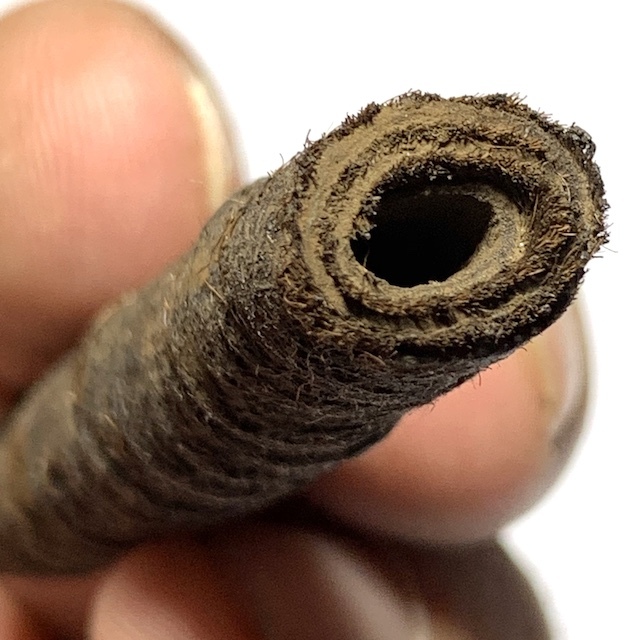 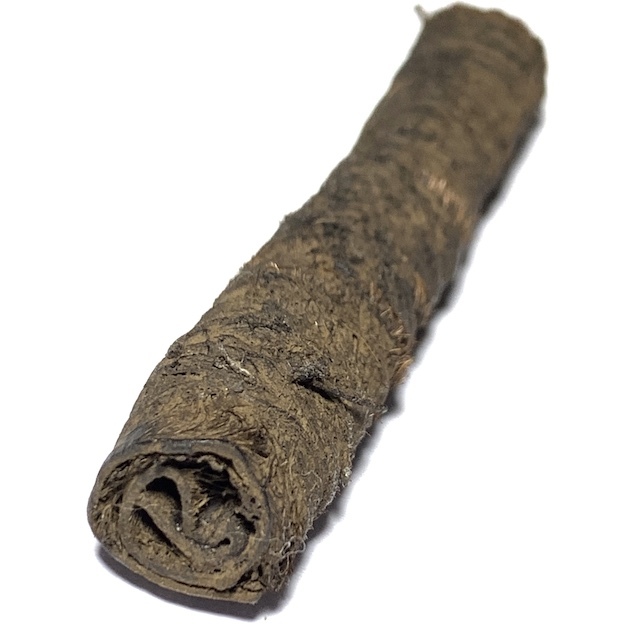 The temple of Wat Klong Dan (Wat Bang Hia), is of course a World famous Historical Temple of Monumental Status in the Amulet Scene, for the fact that this was the temple of Luang Por Parn, Master Wicha holder of making famous Tiger Tooth and Carved Tiger amulets. Luang Por Parn's amulets are of the 'Maha Sethee' Master Class, highly favored and collected by the wealthy collector, which has caused these amulets to become among the most expensive of their genre. 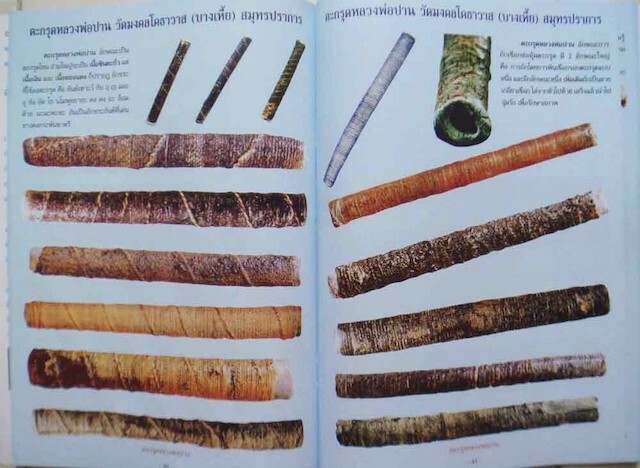 However, we wish to dispose of such exaggerated prices, and demistify monopolisation and price exaggeration, which are indeed seen to be perpetuated, and certain marketplaces do continue to declare these prices, and get them from rich millionaires. But we do not pertain to such practices of price manipulation at such exaggerated levels, and maintain a realistic approach based on our ability to discover and obtain such items of authenticity at reasonable affordable prices, with the expert assistance of Ajarn Spencer to assess and confirm all amulets before presentation. 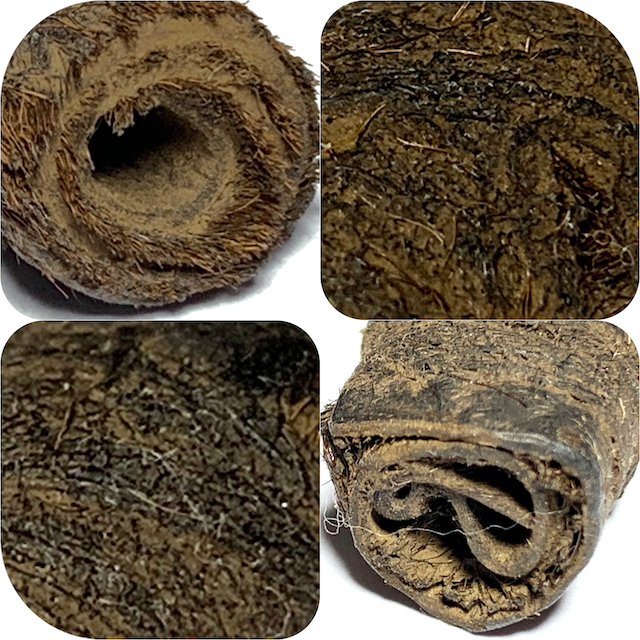 Many people think that Luang Por Parn of Wat Klong Dan is a different Master to the Luang Por Parn of Wat bang Hia, but this is a Myth, that is perpetuated by people's ignorance of the fact, that wat bang Hia, in Bang Bor, Samut Prakarn Province, is a different temple to the temple of Wat Klong Dan.The truth is however, that the word 'Hia' which means both 'monitor lizard' (which is the true reason for the temple being named Wat bang Hia, due to a lot of Monitor Lizards being around in those days), also is a swear word, meaning 'very bad person'. Because the name of the temple of Wat Bang Hia was seen as Inauspicous to some people's ears, it was changed to 'Wat Klong Dan'. 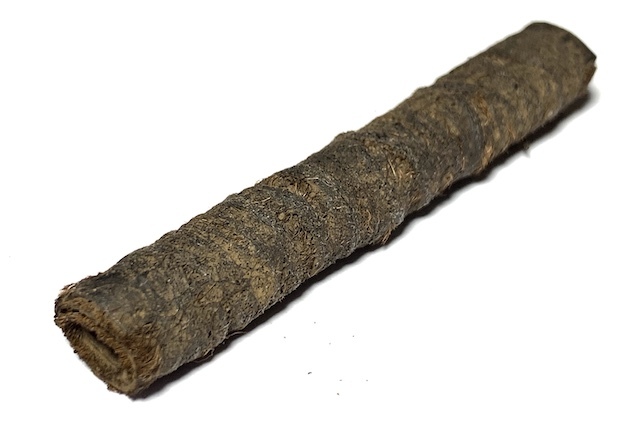 Luang Por Parn was one of the Great Master Guru Monks of his Era (2368 - 2543 BE), and the originator of the Wicha for Tiger Amulet empowerment of this Lineage, using the Wicha of Wat Bang Hia. Wat Bang Hia is of course a World famous Historical Temple of Monumental Status in the Amulet Scene for the fact that this was the temple of Luang Por Parn, Master Wicha holder of making famous Tiger Tooth and Carved Tiger amulets, whose amulets are counted among the 'Maha Sethee' Millionaire master Class Category. 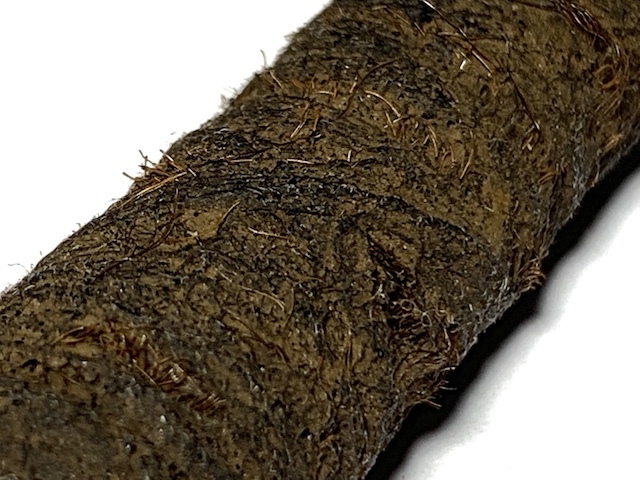 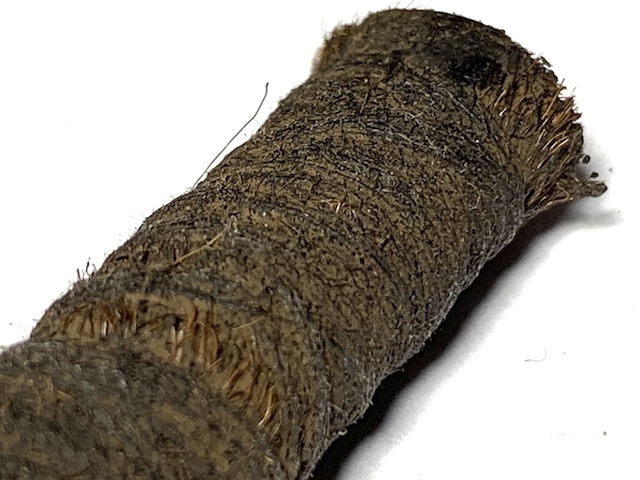 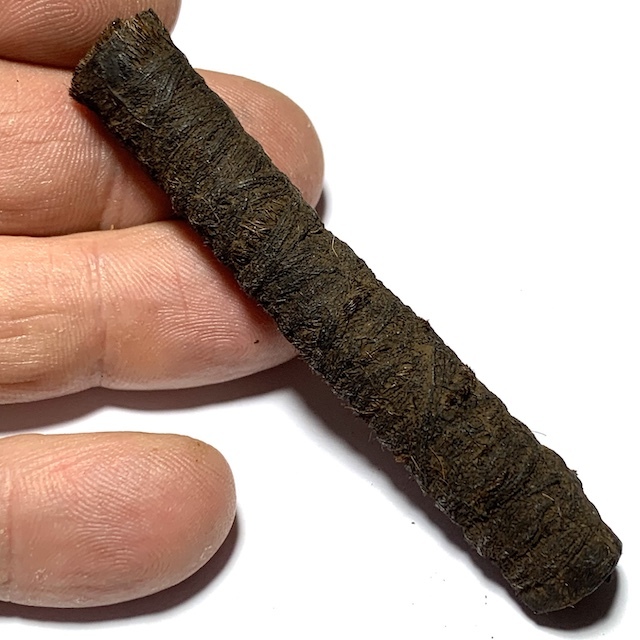 The amulet comes with free EMS shipping worldwide included. The blackening of the ancient Chinese lacquer has developed through aging on the surface of the amulet through time, making this exhibit easy to see its true ancient age, making this an Ongk Kroo 'teacher Model' for examination to teach the eyes to recognise the appearance of Chinese lacquered Takrut of this Era. The Takrut is eminent in appearance and instantly recognisable as authentic to the naked eye, and brings immense character and excellence to the amulet, revealing its evident age and distinguished status, adding to the Magick of Maha Amnaj Commanding Power, Dominion and Influence in its visual effect, which is Imposing in Itself at First Glimpse. 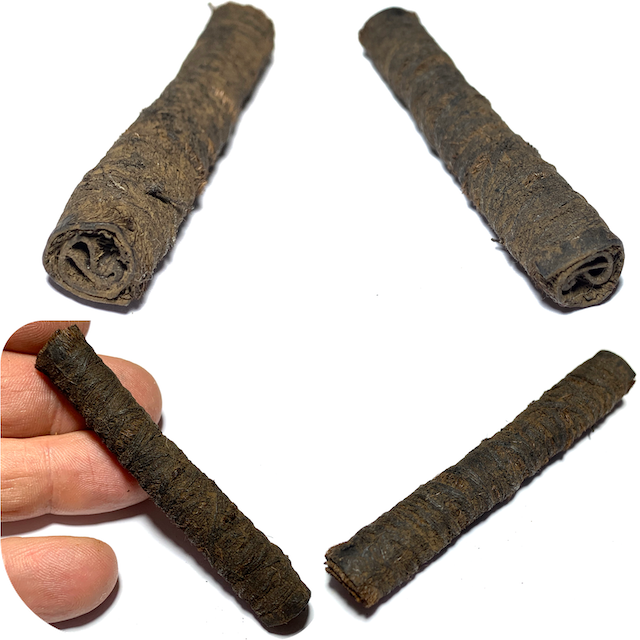