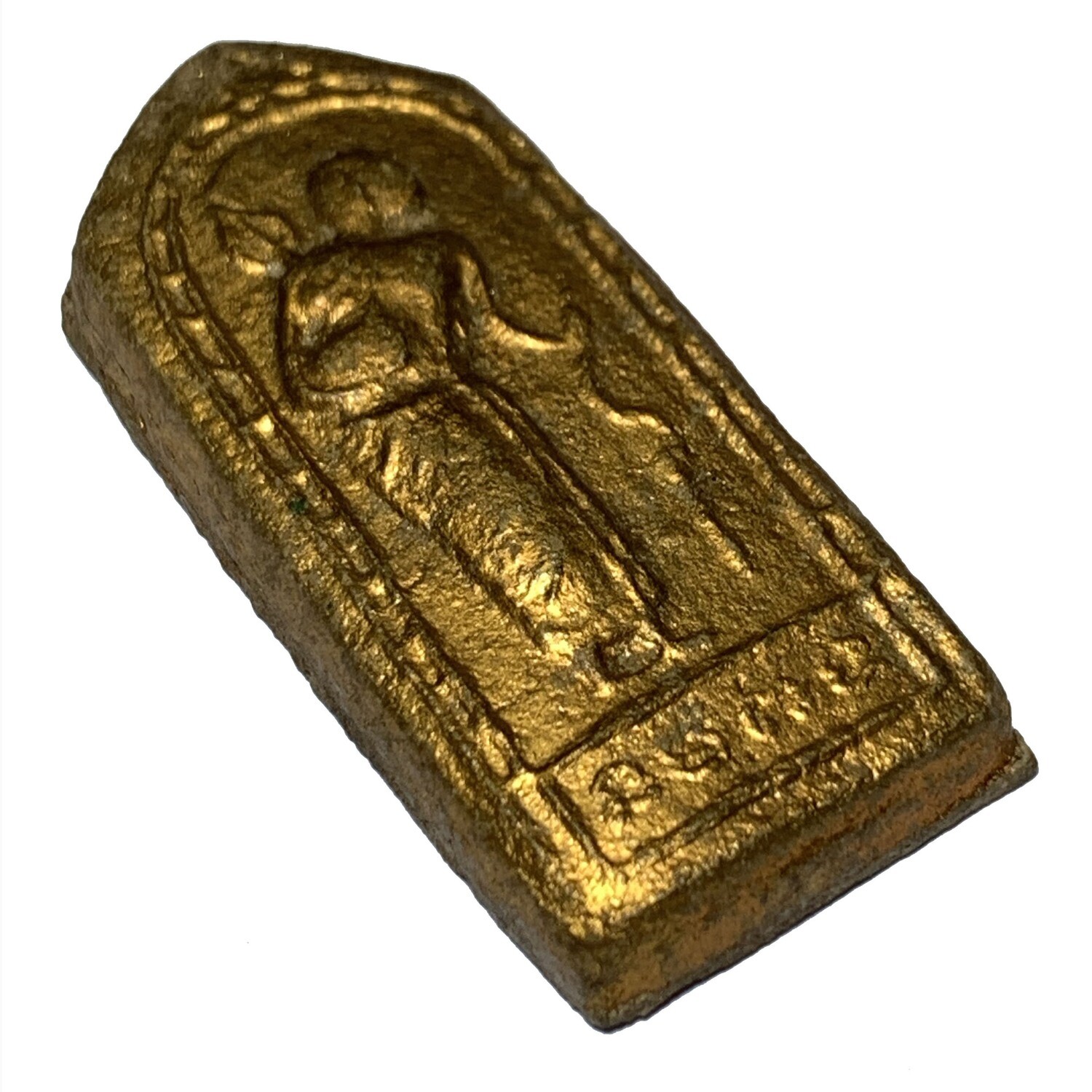 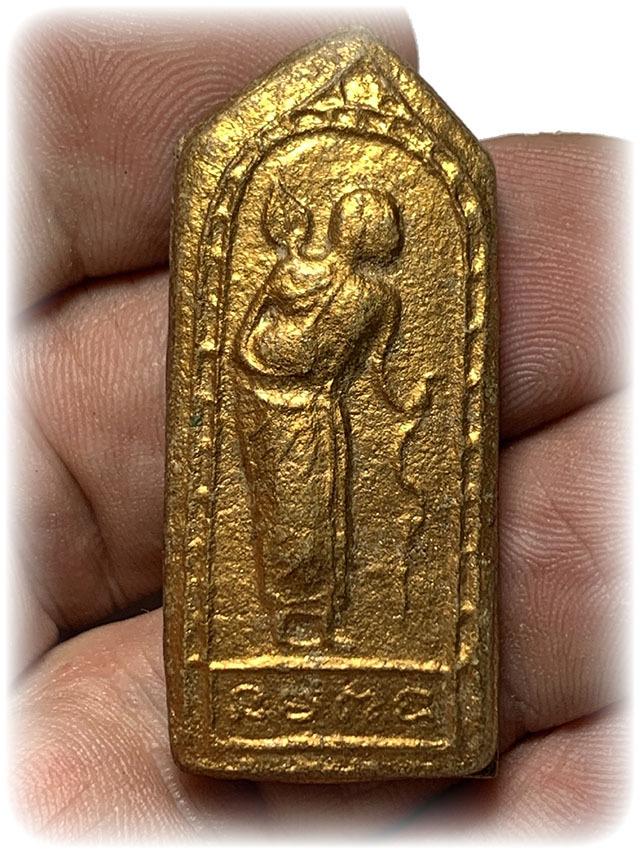 This amulet comes with A4 Size Certificate of Authenticity and FREE EMS Shipping Worldwide included. This amulet is a very rare Pim to find, with lesser numbers made than the Pra Khun Phaen Prai Kumarn and the many famous Coin amulets of Luang Phu Tim, and is highly preferred in this size, for it is wearable for Men Women and Children, and highly revered for its power of auspicious blessings, Metta Mahaniyom Mercy Charm attraction, and Klaew Klaad evasion of dangers. 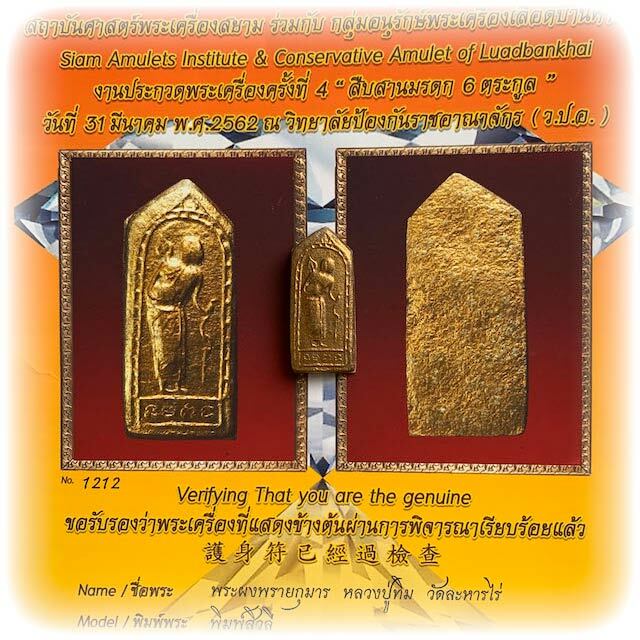 Pra Sivali is commonly pictured walking with a wooden staff, and Yaam shoulder bag, or sometimes also with the ‘Glod’ (umbrella),or Pat Yos Fan, representing a traveling forest monk (Tudong), who lives in simplicity and travels light, with the minimum of belongings to carry. His Magical Influence is said to possess the Miraculous power to quickly attract favor and riches.Luang Phu Tim made the Pra Sivali in various colored powders to mix with the Pong Prai Kumarn, ranging from White, Pink, and black Wan Plai Dam powders amongst others. 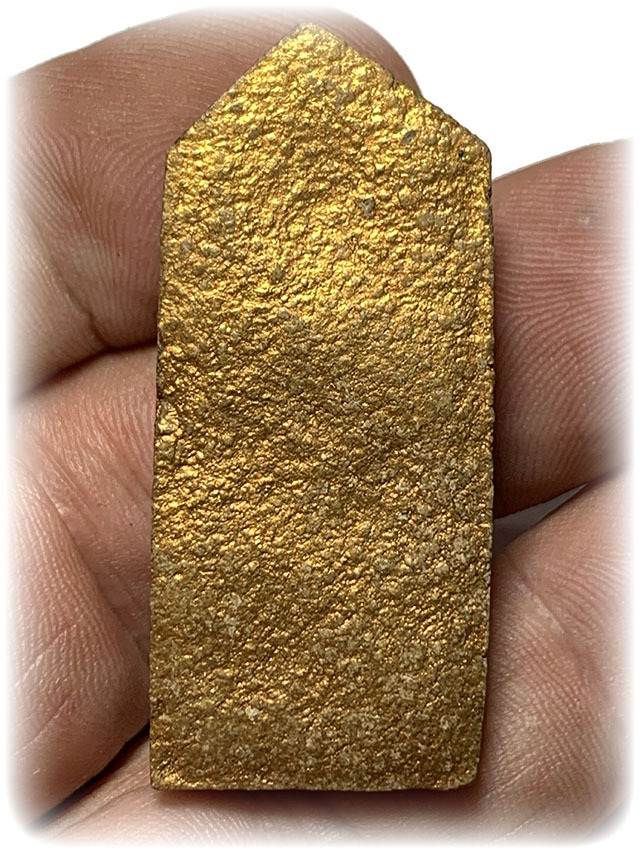 Apart from as a statue on the altar for making reverence, small miniature statuettes of Pra Sivali are very popular as luck bringers to carry around at work during the day, and increase one's fortune. The Pra Sivali amulets were pressed along with the Prai Koo Prai Kumarn, pra Siarn Dto and Siarn lek amulets in the year 2515 BE, with other models of amulets, such as the Khun Phaen Block Tong Hlueang,and many other block presses, such as Pra Somdej, Pra Luang Phu Tuad, Pra Pid Ta, Look Om, and Many others amulets such as Takrut, Pha Yant, Metallic Coins, and hand carved amulets in woood and ivory. 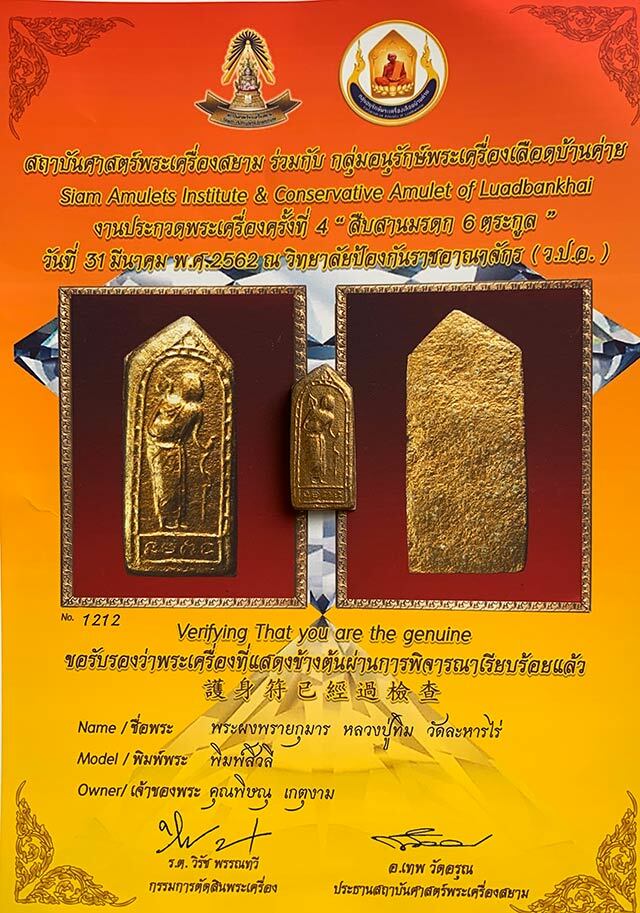 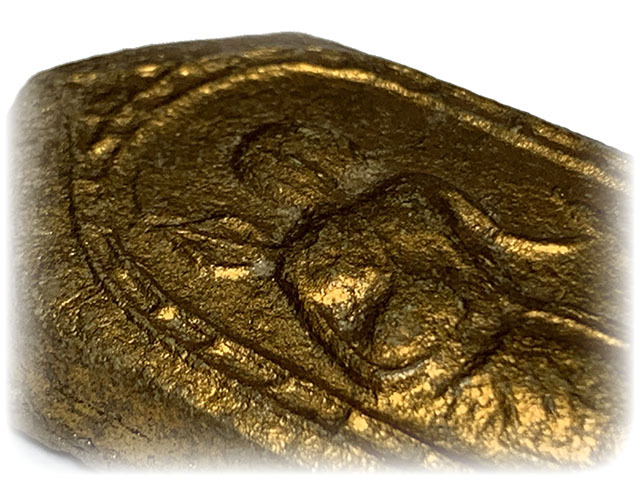 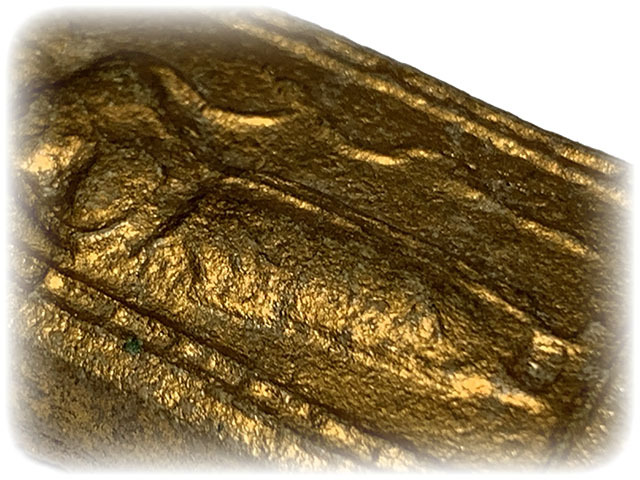 Visually, this type of sacred clay has a very soft and subtle appearance, but which further observation under the eye loupe reveals true depth and dimension, and is full of the classic characteristics of Pong Prai Kumarn powders, and a true Pra Pong Prai Kumarn amulet of Luang Phu Tim. The amulet is especially attractive for the sai rae tong kam gold powders which are fused with the Muan Sarn Sacred Powder surface, from application of Nam Man Prajao Thaksin Oil, and Gold Powder in the block press when pressing the clay. 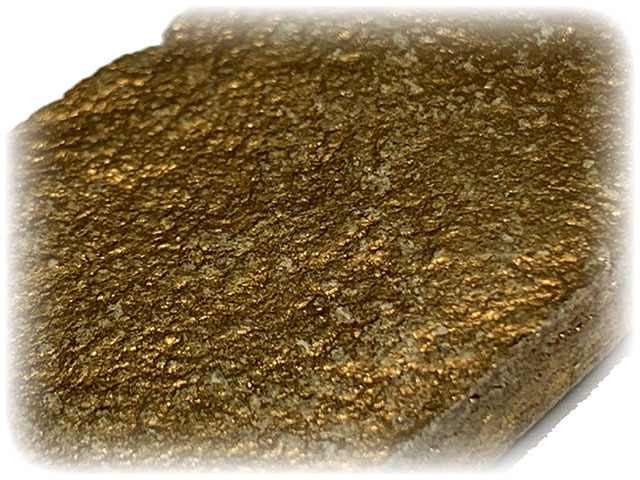 The Sacred powder content is extremely rich in Pong Prai Kumarn and and Sticky Rice within the Sacred Clay, visible under the eye loupe, with its coarse surface texture of Khaw Hniaw Sukh blessed sticky rice, which was a habitually used ingredient of Luang Phu Tim in making Pra Pong Prai Kumarn amulets. Luang Phu 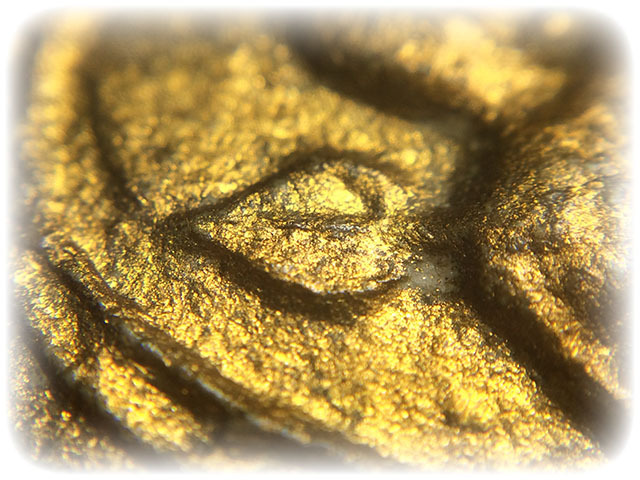 An extremely rare acquisition for any true devotee and avid collector of the Pra Pong Prai Kumarn of Luang Phu Tim, Pra Sivali, and those who like to collect the full pantheon for their showcases. Extremely Sacred and Undoubtably Powerful, coming from the era where Luang Phu was less famous and much more intensively involved in the pressing of the amulets. 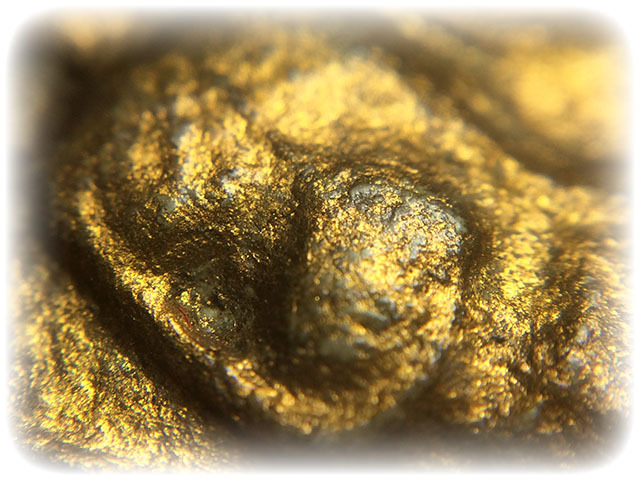 The Pra Pong Prai Kumarn Luang Phu Tim is known for its Maha Sanaeh and its Metta Mahaniyom Power, as well as for immense Siang Choke Maha Lap for Gamblers and Speculative Risk Investors to increase their good fortunes. 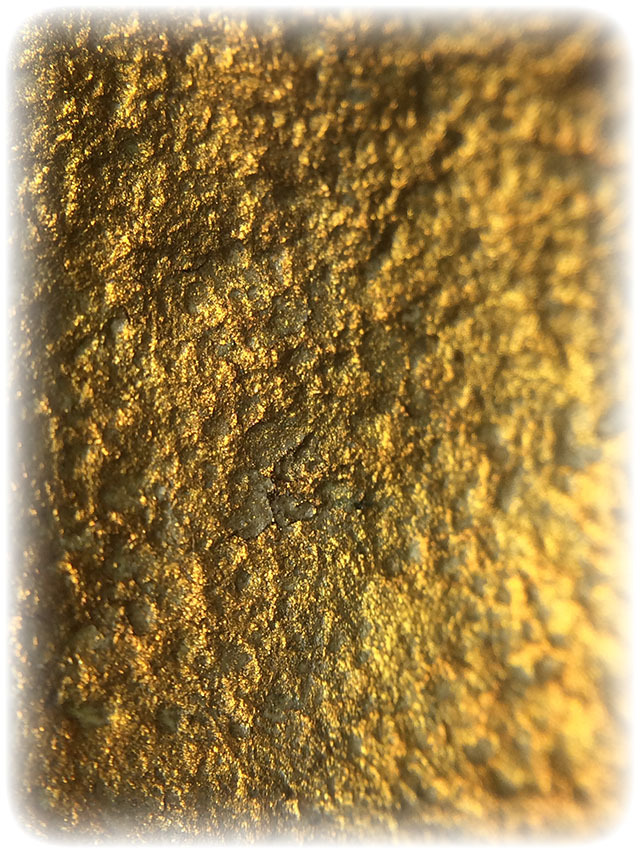 The Pra Sivali amulet has immensely highl level of preference and its own groups of devotees and collectors, for the charm and spiritual power associated with`the hand pressing and personal touch given by Luang Phu Tim to the early era amulets and the fact that they are amongst the first Pra Pong Prai Kumarn amulets made by Luang Phu, and given individual attention and hand pressing. 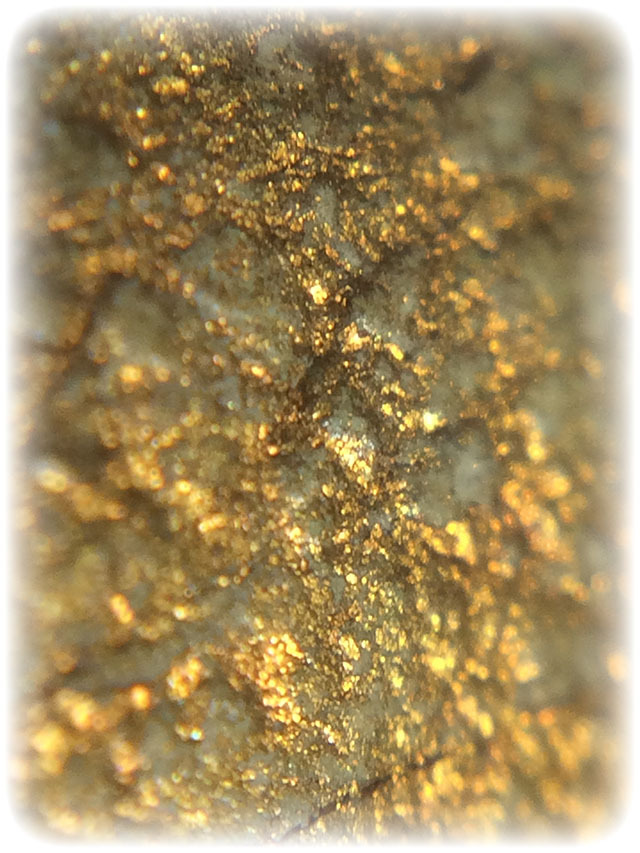 Close perusal under the eye loupe reveals the amulet to be made from a base of Nuea Pong Prai Kumarn,with Khaw Hniaw Sukh sticky rice, and has a very high Muan Sarn Concentrate. This is a most Powerful Muan Sarn filled with Metta, Maha Lap, Klaew Klaad, Maha Sanaeh, Maha Pokasap and Serm Duang. 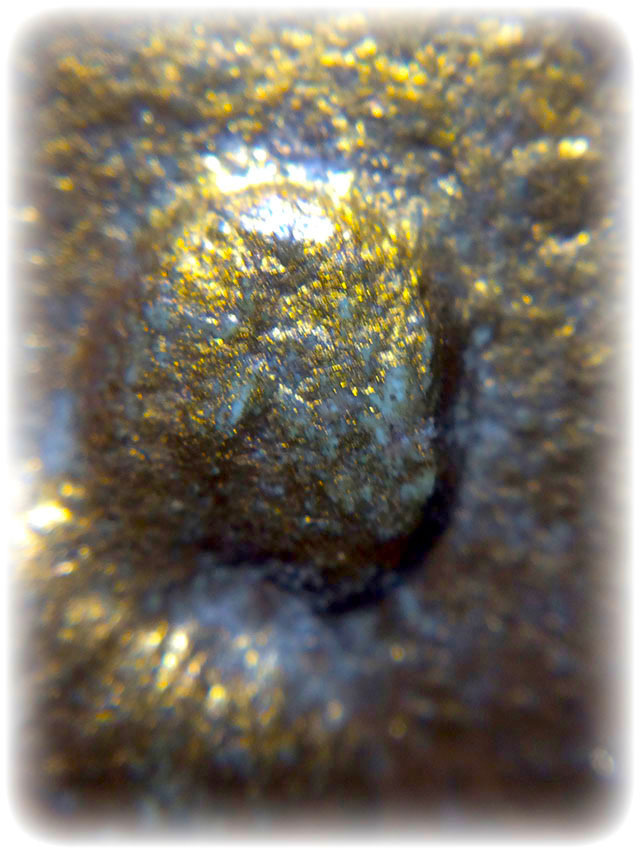 Below; A Podcast from the 'Amulet Talk' Series, talking about the highly discussed top hit 2515 BE Edition Block 2, of the Pra Khun Phaen Pong Prai Kumarn of Luang Phu Tim, another top preferred and now number one amulet of the Muan Sarn Sacred Powders type amulets of Luang Phu Tim, since the "Block 2" 2515 BE series overtook the popularity of the 'Block Raek' 2517 BE series 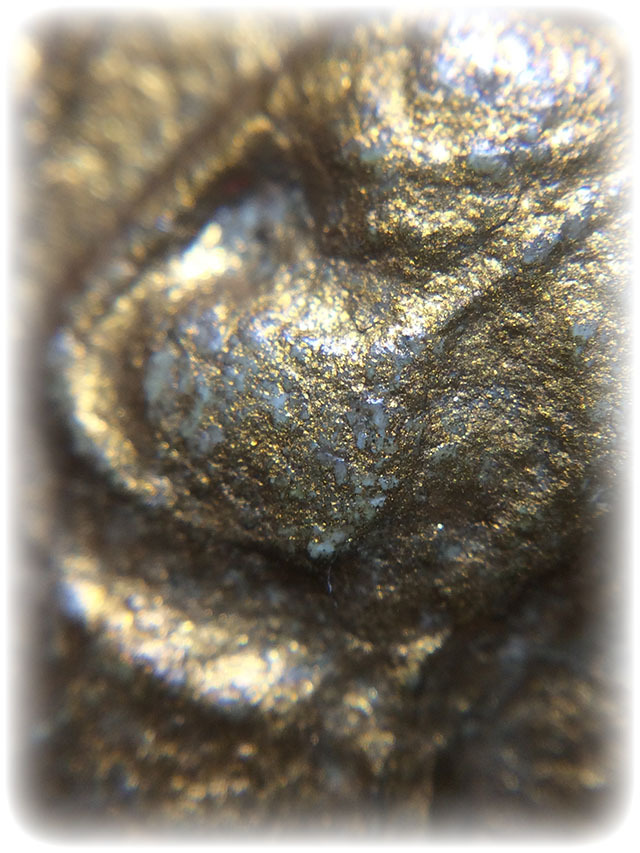 Be it his Roop Muean, Rian Coins, Look Om Pong Prai Kumarn, Pra Khun Phaen, or the many models of Pra Pong Prai Kumarn Pim Boran, the Muan Sarn Sacred Powders of Luang Phu Tim and his empowerments are among the most highly regarded of all. This particular exhibit has easily recognizable features of the easily identifiable Muan Sarn for its classic appearance, with no visual discrepancies, and the evident presence of authentic Sacred Powders of Luang Phu Tim. 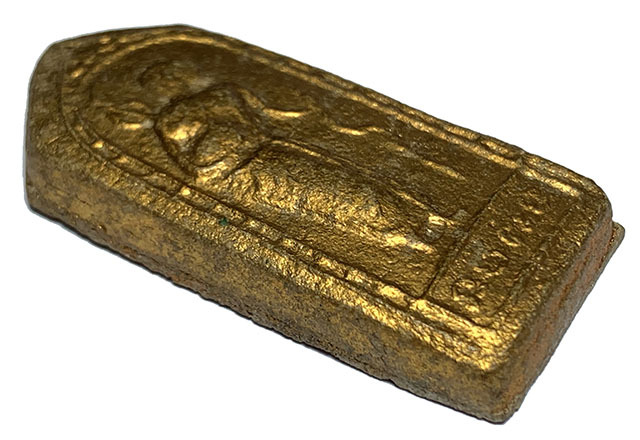 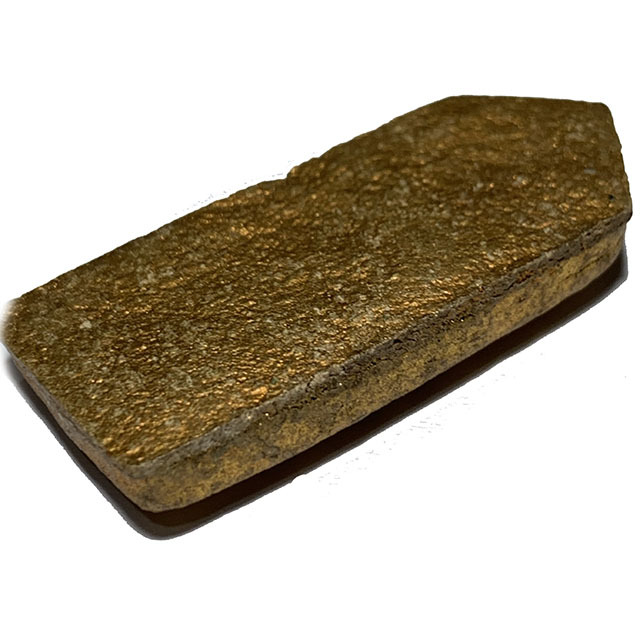 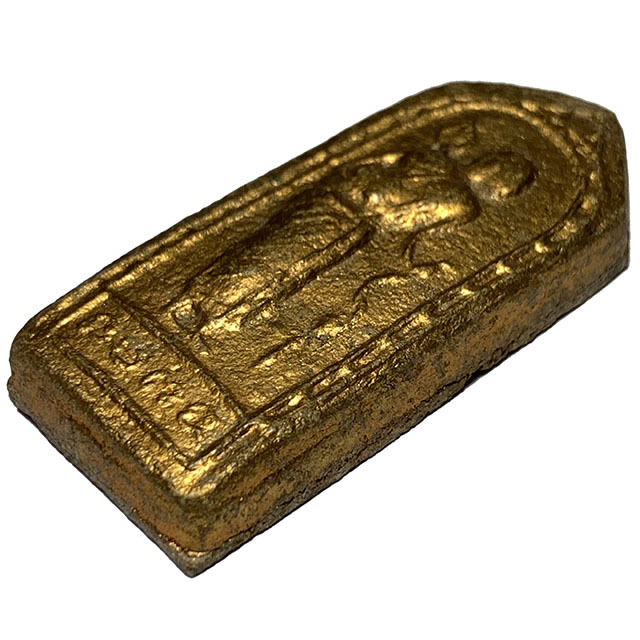 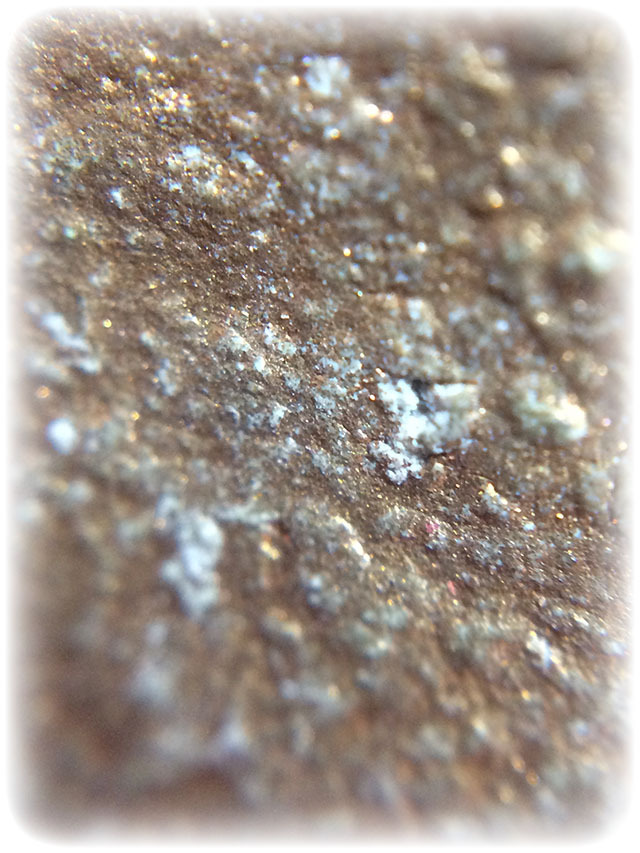 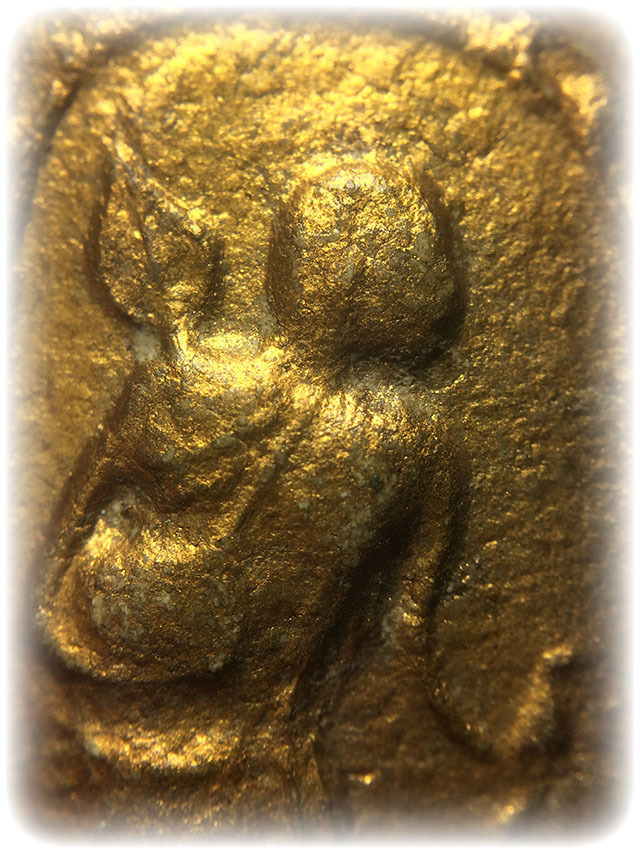 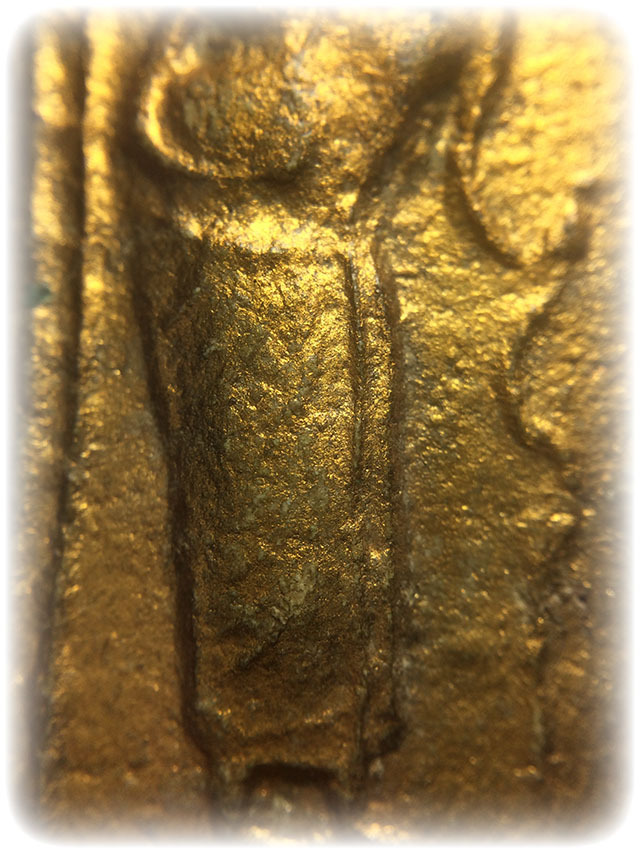 We ourselves feel that all of Luang Phu Tim's amulets are equally Sacred and Powerful in their own way, regardless of which edition or which temple he blessed them at (or how high or low their prices are), but we do, as do all Amulet Appreciation Fanatics, recognise the categories of preference within the hierarchies of different editions, which is for us one of the more subtle, and fascinating parts of the study of high end amulets, and part of the fine art of learning how to recognise and value Sacred Amulets of High Preference and Rarity. By this, we mean that any amulet blessed by Luang Phu Tim, be it of higher or lesser monetary cost, is as powerful and sacred as any other. 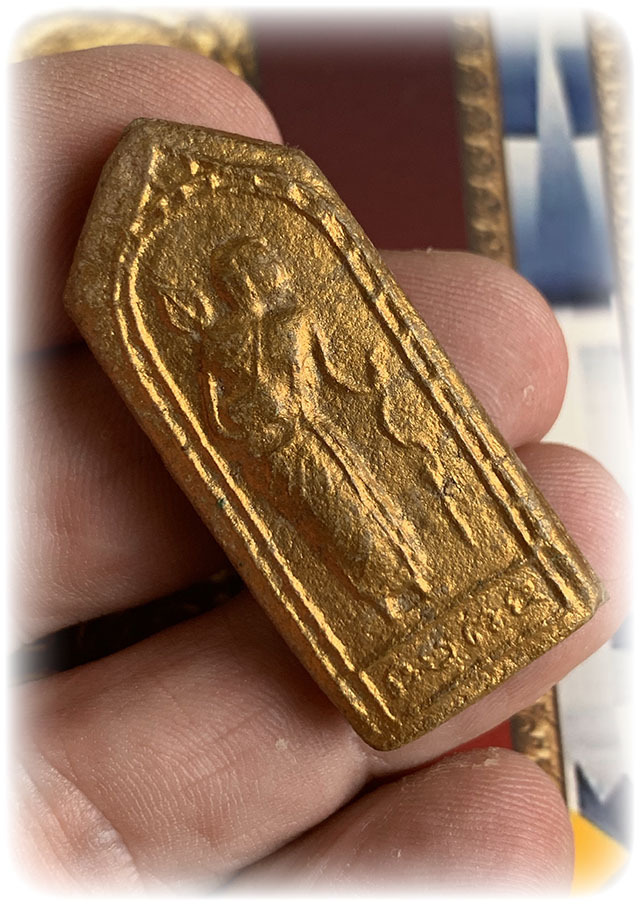 (When you chant this whilst making Bucha to Pra Sivali, then say in your inner heart 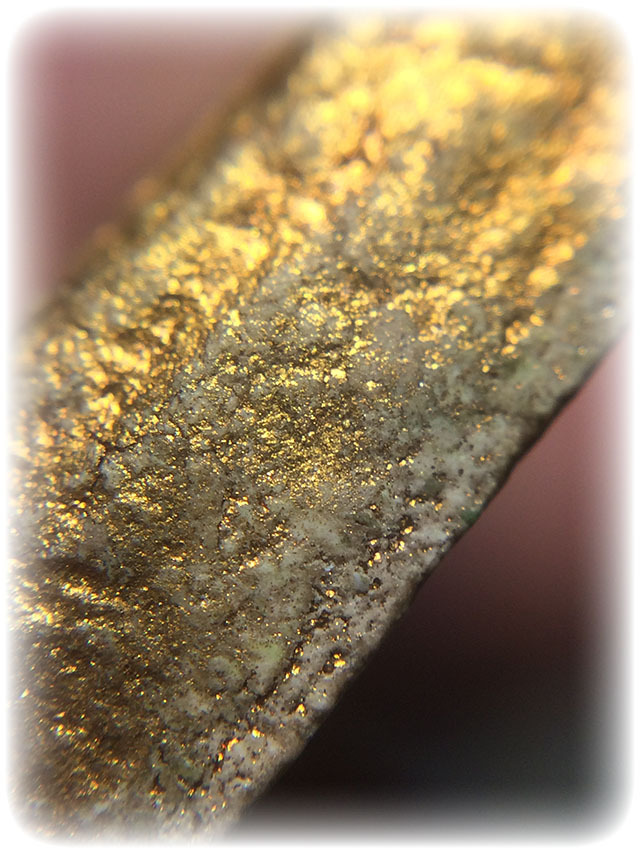 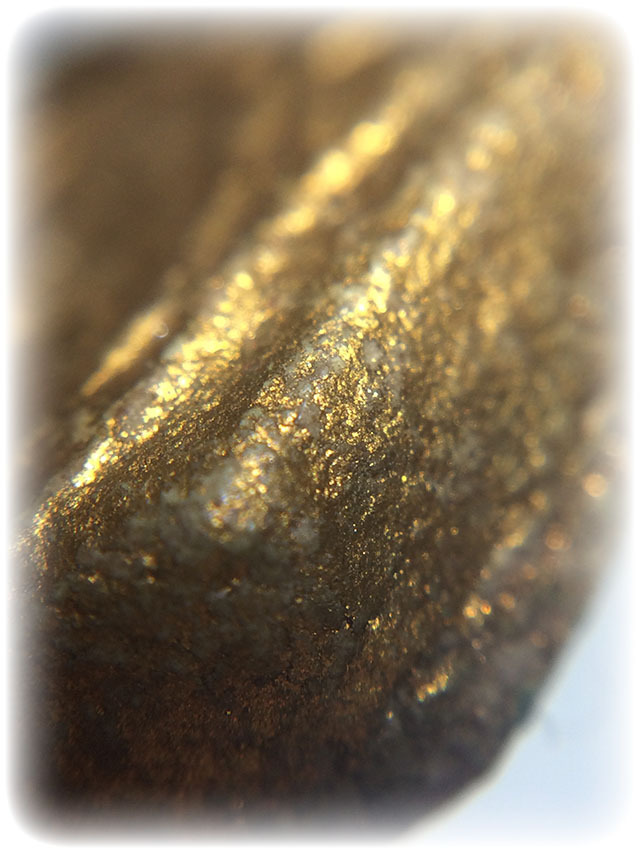 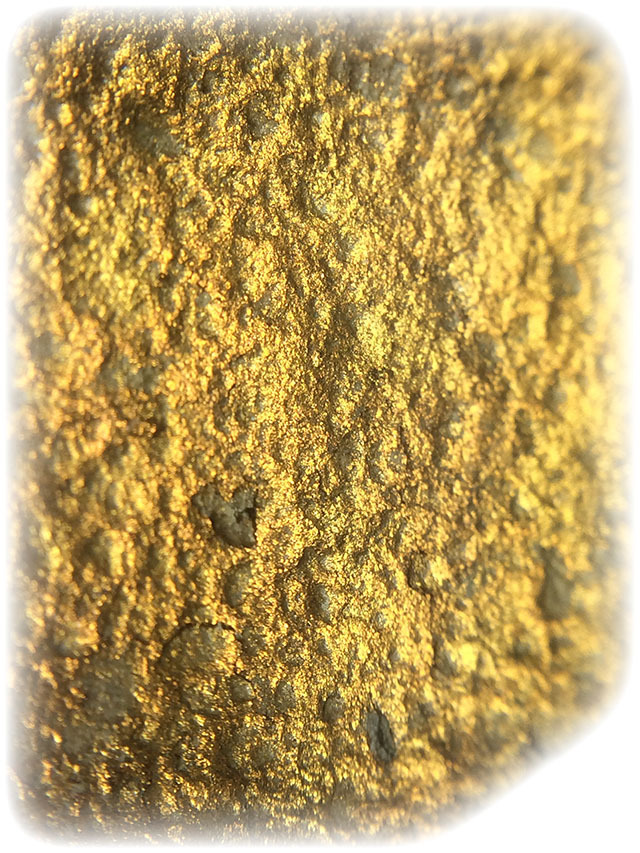 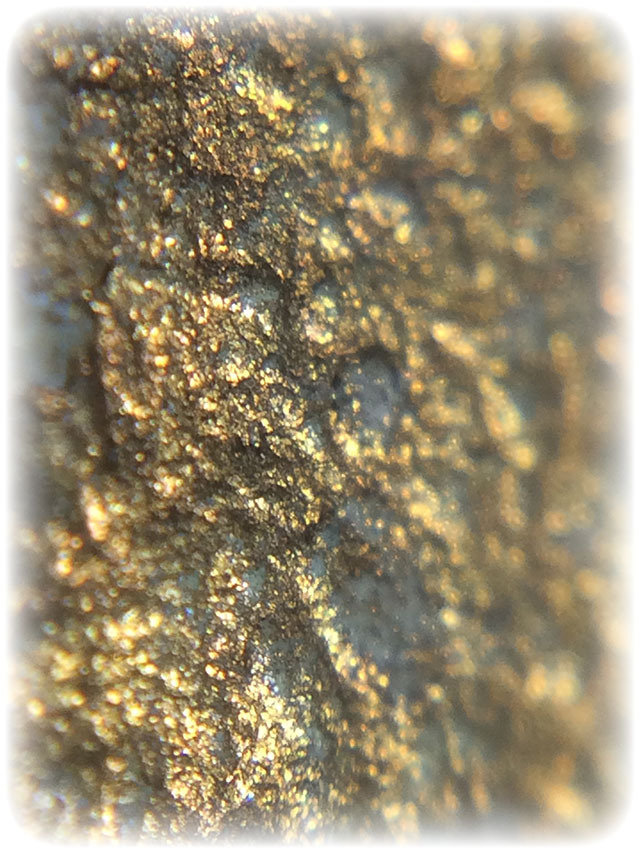 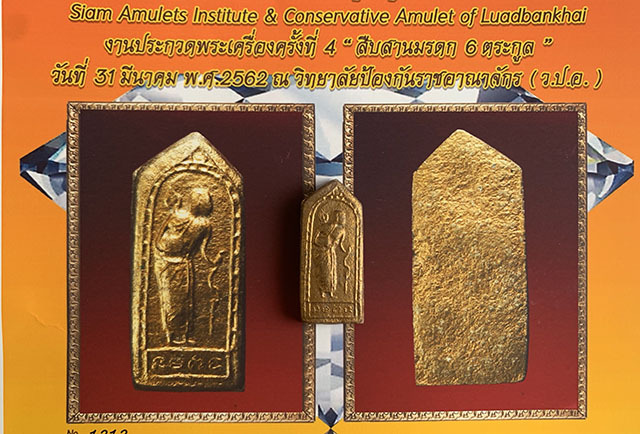