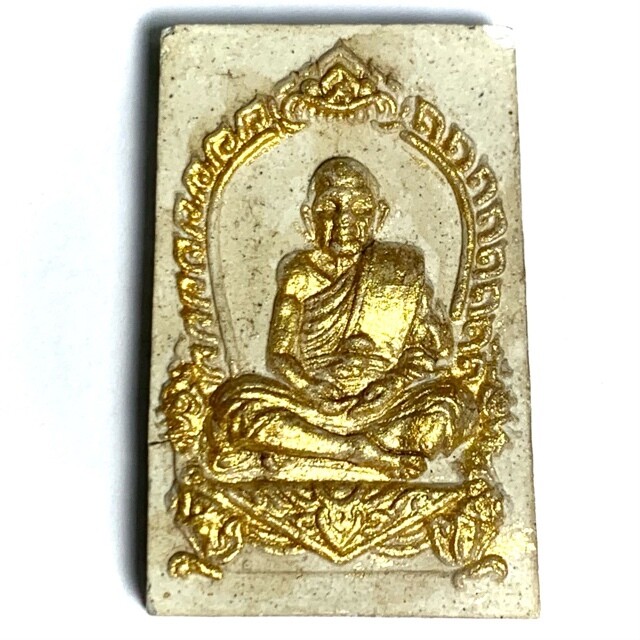 The Pra Pong Roop Muean Pim Nang Sum Sao Ha Pid Tong Gammagarn amulet of Luang Phu Hmun was blessed in the 2543 Sao Ha Bucha Kroo series, and is highly renowned for the use of a high concentration of Sacred Muan Sarn Powders used in their making, and for their rarity, being equally rare to find as many of his famous coin amulets. Released in the 105th anniversary 'Sao Hae Roi Ha Pi' 5th lunar Saturday birthday edition of Luang Phu Hmun in 2543 BE. The amulets were made in 2543 BE and placed for blessing in the same Buddha Abhiseka Ceremony held for the 'Jaroen Lap' edition (105th Birthday Edition), with not only Luang Phu Hmun present to perform empowerment and blessings, but also a number of other Great Master Monks. This coin was blessed along with the famous Rian Sema 1st edition coin, which is so renowned for its powerful magical influence. 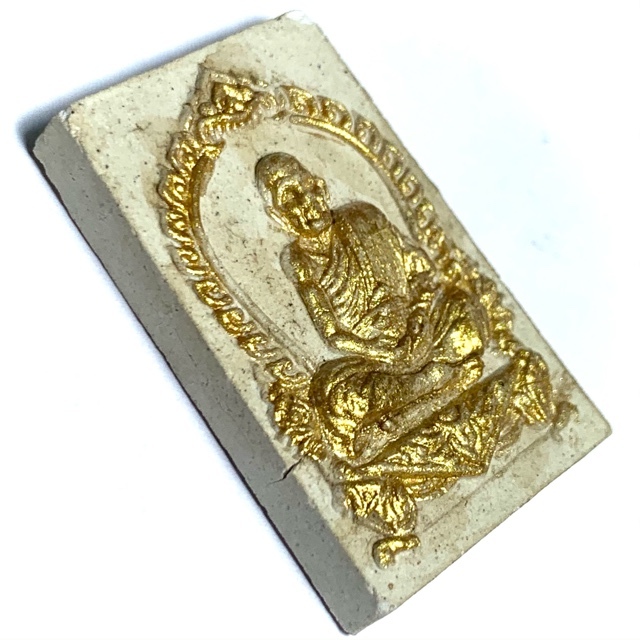 The front face features the image of Luang Phu Hmun seated on a Dais, surrounded by an arch of Granok Flames. This series of amulets were placed for blessing in the same Buddha Abhiseka Ceremony held for the 'Sao Ha Bucha Kroo' edition, with not only Luang Phu Hmun present to perform empowerment and blessings, but also a number of other Great Master Monks. 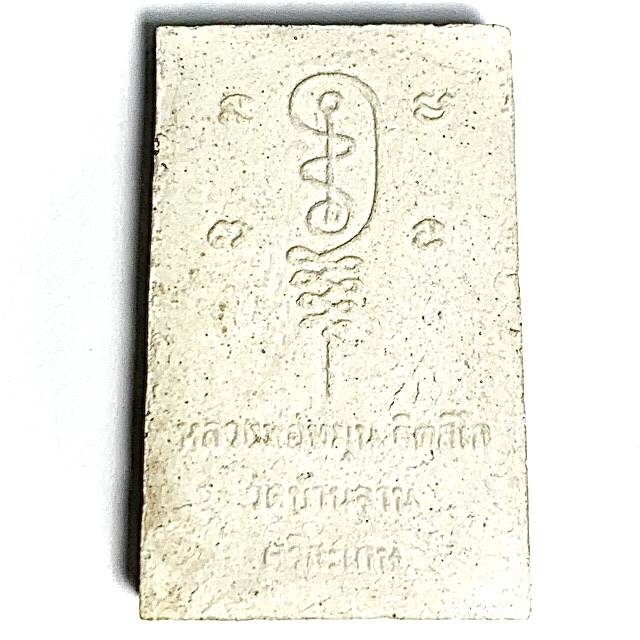 The rear face of the amulet features a Sacred Na and the words 'Wat Ban Jan Sri Saket' embossed on the bottom. Below; Close up of the Muan Sarn Powders of the Upper Front Section of the Front Face of the Pra Pong Roop Muean Luang Phu Hmun Nuea Pong Puttakun Pid Tong 2543 BE amulet 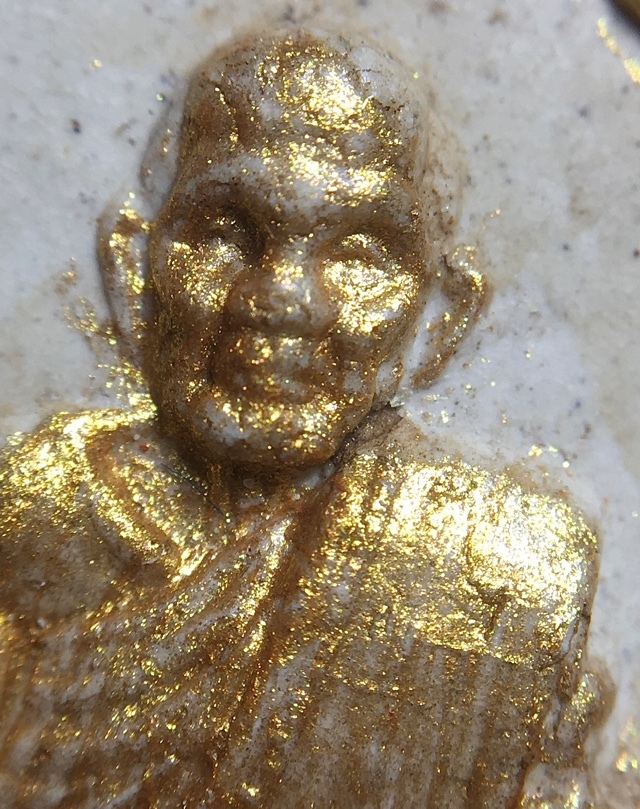 The amulets can be found to possess tonal color differences in their appearance, ranging from yellowish beige to light gray, depending on each individual amulet. More than 108 types of Sacred Herbs and Pong Chan Hmak betel-areca of Luang Phu was added to the Sacred Clay, and then different admixtures were made in differing colors, with various extra ingredients. Some exhibits can be found to have a piece of Jivara robe attached or with some of Luang Phu's Hair affixed to the surface. Some special versions were made with gold Takrut, silver Takrut, and gold leaf pasted, in Gammagarn series limited numbers, with only 5000 amulets made in all, including all different models and types of Muan Sarn Sacred Powders.

Below : Close up of the gold leaf applied to the Muan Sarn Powders of the Central Front Section of the Front Face of the Pra Pong Roop Muean Luang Phu Hmun Nuea Wan 2542 BE Wat Pha Nong Lom Series amulet 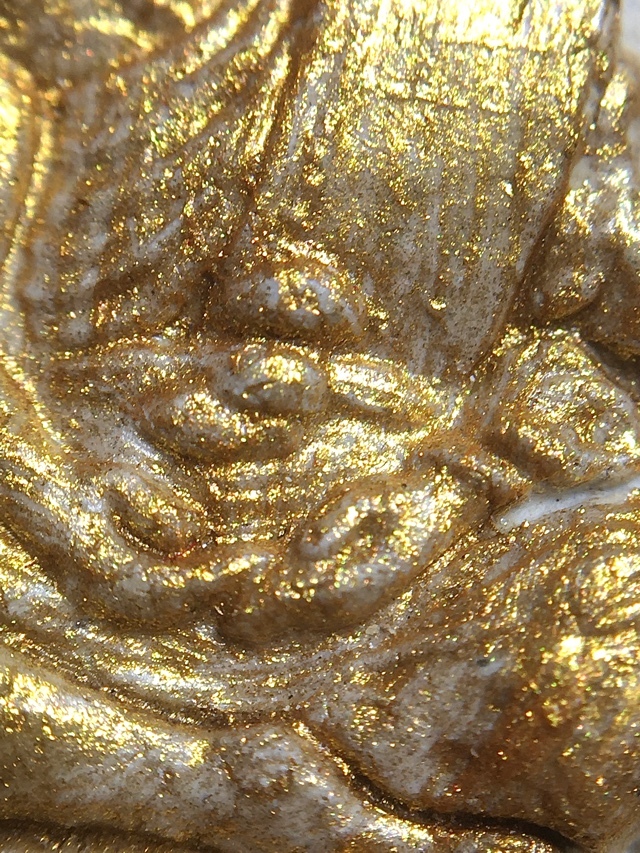 The Muan Sarn clay itself has plenty of Luang Phu's hairs (Gesa) in the admixture which Luang Phu Hmun had collected ever since his days traveling on Tudong forest wandering. Most exhibits are found in a whitish-brown (beige) colour, which can vary in lighter and darker tones, and in light grayish colour. Some rare exhibits have Kraap Nam Wan (stains from herbal tincture) applied to parts of the surface, red, gammagarn gold leaf embellished, and with gold and silver Takrut.

Below; Close up of the Sacred Yant Na and Muan Sarn Powders of the rear Face of the Pra Pong Roop Muean Luang Phu Hmun Nuea Wan 2543 BE Sao ha Bucha Kroo amulet. The rich sacred ingredients are visibly present and risen to the surface. 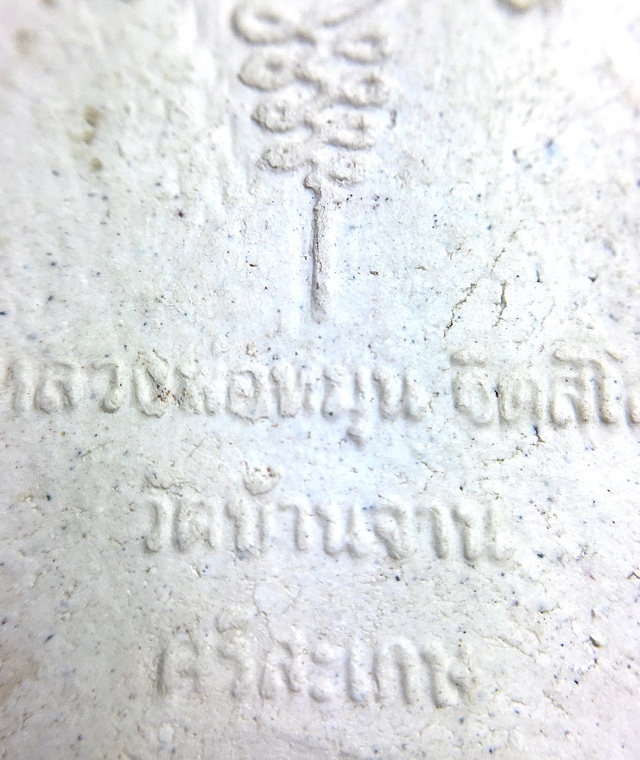 The Pong Roop Muean Nang Su Sao ha Bucha Kroo Amulet is a very rare, and a top preferred amulet of Luang Phu Hmun Tidtasīlō, which gained great fame due to a multitude of reports of miraculous successes and life saving miracles from devotees who wore the amulet, making it one of the great popular amulets of all time of Luang Phu Hmun, for miraculous powers. The first blessing ceremony on 27th February 2543 BE was held at Wat Pha Nong Lom, which was held during the Piti Te Tong Roop Lor Pra Roop Muean casting ritual held for the forging of the LP Hmun Bucha altar statues and Loi Ongk statuettes, which were released in 9 and 5 inches wide base versions, and in portable 'Roop Lor Kreung Seek', which are also seen attached to the Khan Nam Mont holy water bowl of Luang Phu Hmun. This ceremony also blessed the famous Pra Pid Ta Yant Yung amulets, and the whole series was empowered by Luang Phu Hmun presidinig over the other Monks who came to chant.

Below; Another Close up of the Muan Sarn Powders of the Dais on the Rear Face of the amulet 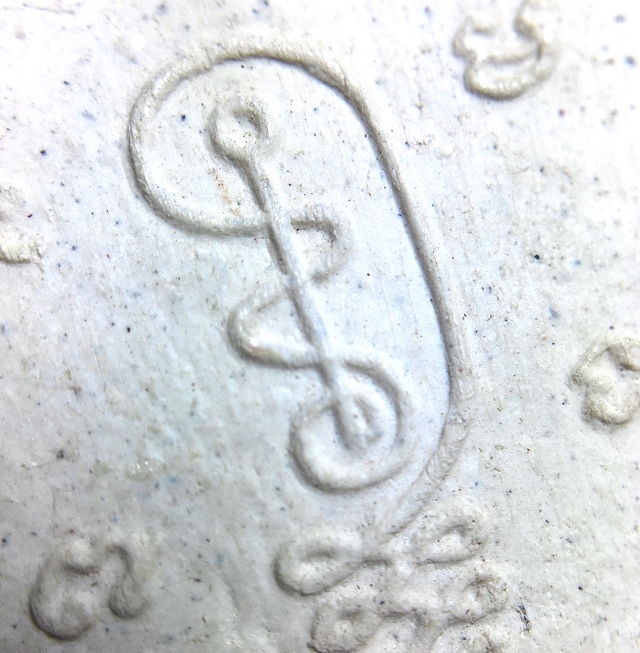 Below: Sacred Unalome embossed in the Muan Sarn Clay of rear face 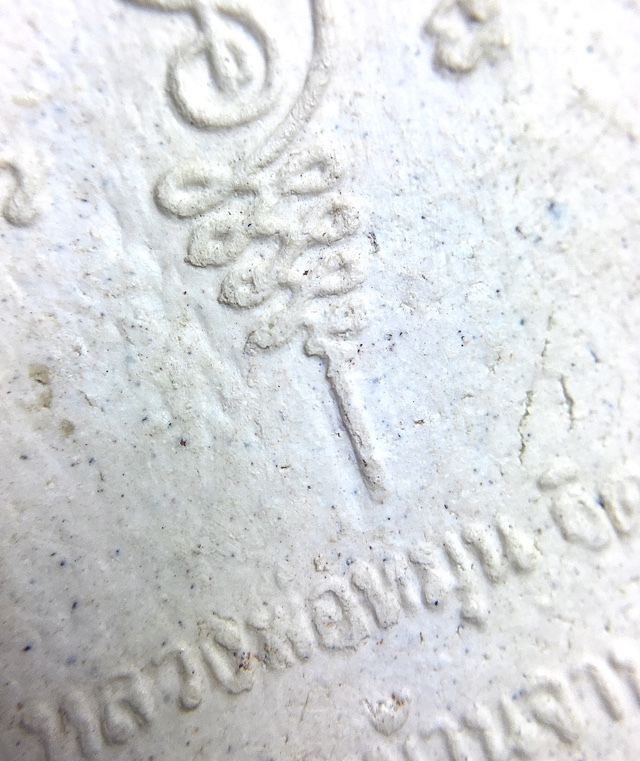 The 5th and final empowerment was performed on Sunday 30th April 2543 BE at 09:19 a.m. within the Uposatha Shrineroom of the temple, with a large number of monks from around the country to assist Luang Phu with the final Buddha Abhiseka. The amulets of Luang Phu Hmun are extremely popular, for they are very well known for the power of Jaroen Lap Wealth Increment, and Lucky Fortunes, as well as for their Miraculous Protective Powers. Released in the 2543 BE 'Roi Ha Pi' 105th birthday edition of Luang Phu Hmun.

Luang Phu Hmun was a Maha Thaera Guru Monk of great age and who recieved Great reverence and Respect from the people of Tambon Jan for his Diligence and Purity in practicing the Vinaya as a Buddhist Monk. 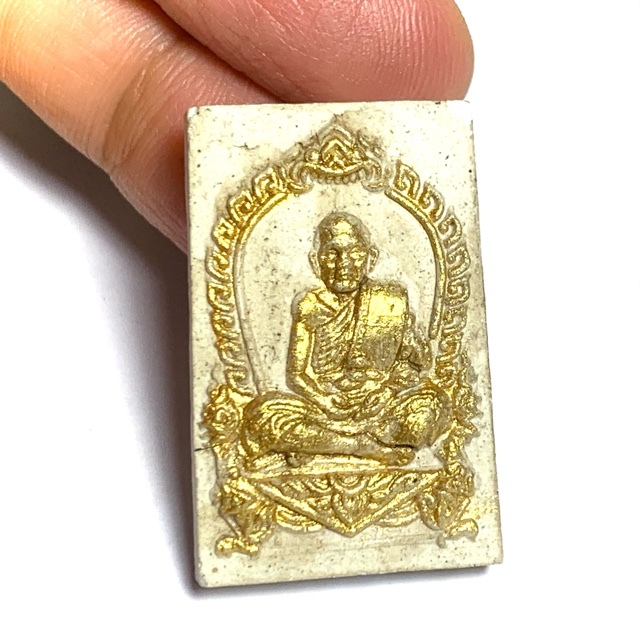 Below : Front Cover of first of a two volume encyclopaedic pantheon of the amulets of Luang Phu Hmun Tithasilo, of Wat Ban Jan 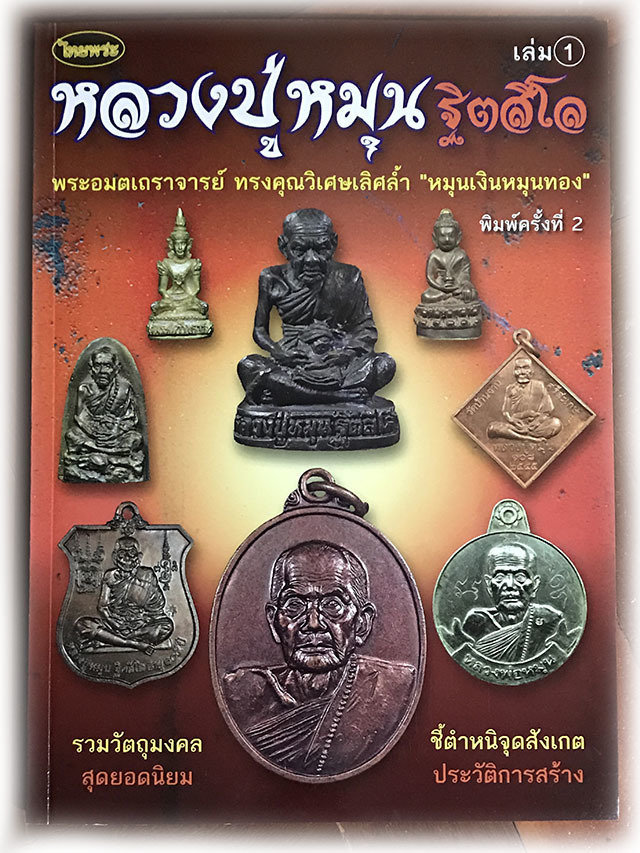 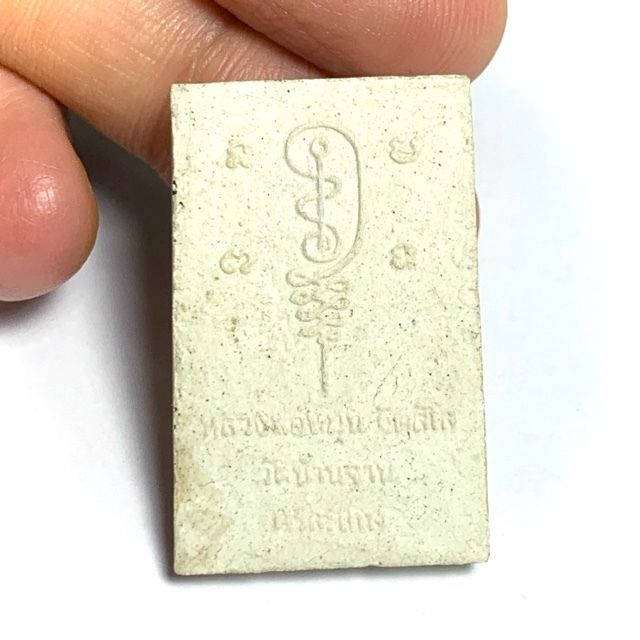 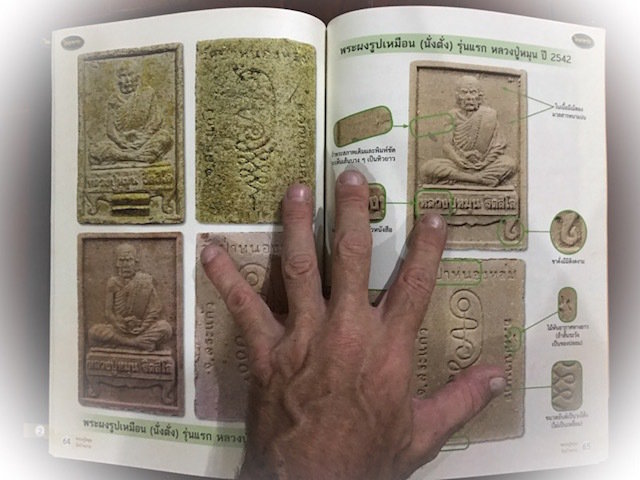 His predictions and instructions for ceremonial empowerment of amulets after his physical death, have been followed to the letter since his passing, for he gave special instructions to inform as to when and how he would return with his spiritual presence to empower amulets posthumously. 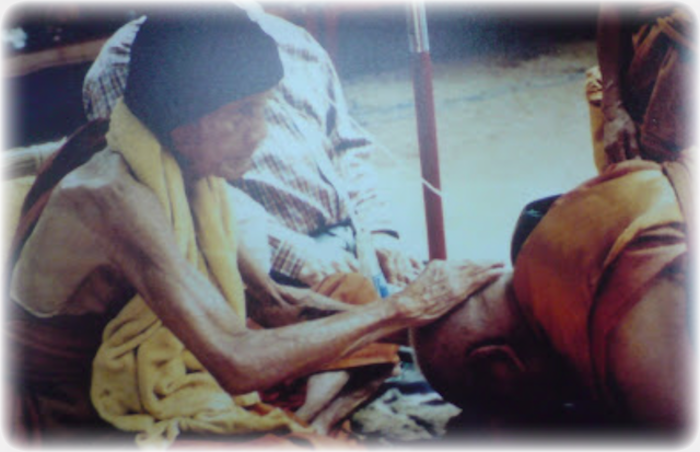 The Miracle Powers of Luang Phu Hmun are Legendary, with so many stories of Miraculous events related to this Monk, who has seen the Reign of Five Kings in his Lifetime. Luang Phu Hmun's amulets are now very hard to come across, and carry mid-elevated price ranges, having entered the annals of Pra Niyom High End Master Class Category within all amulet associations and fanclubs.

Below; 105th Birthday edition Amulets of Luang Phu Hmun in a news article 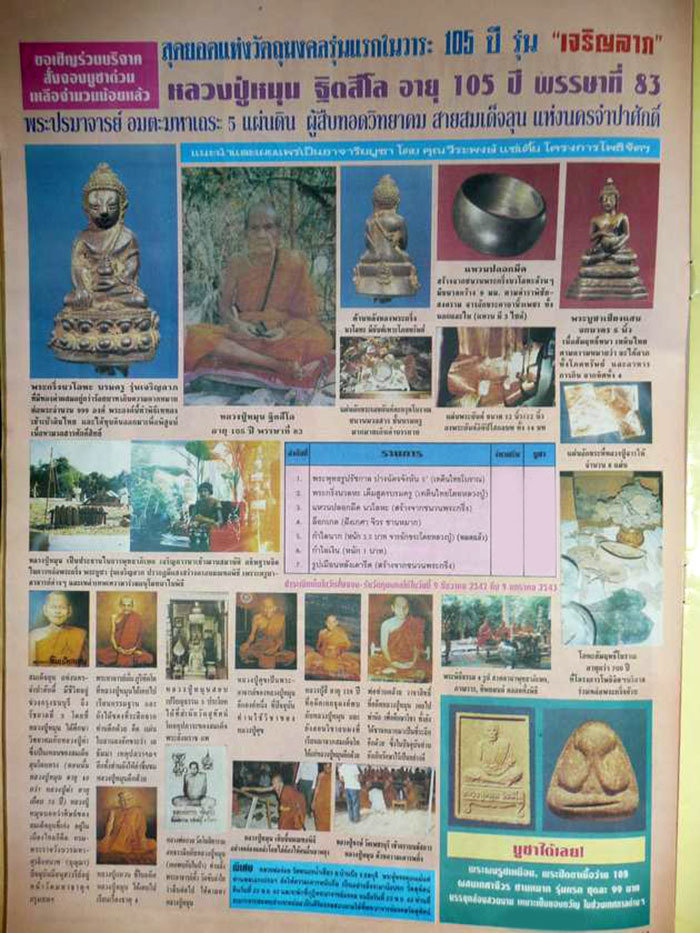 LP Hmun's amulets are now very rare, and prices have become that of the Master-Class Category price Range since his passing, both for the high interest of the amulet societies to document and curate, and because of the fact that most of his remaining exhibits have been snapped up by the inner circle of devotees and collectors, who know about the attainments of this Monk. His immense popularity is to do with the fact, that there are severe reasons to believe, that he may have been an Arahant. His amulets are eminent members in the annals of the Classics. 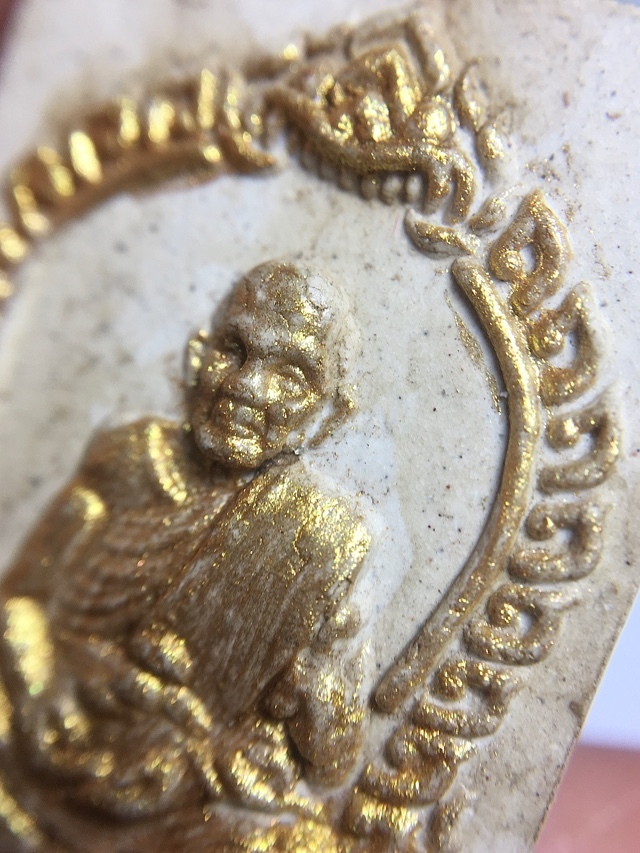 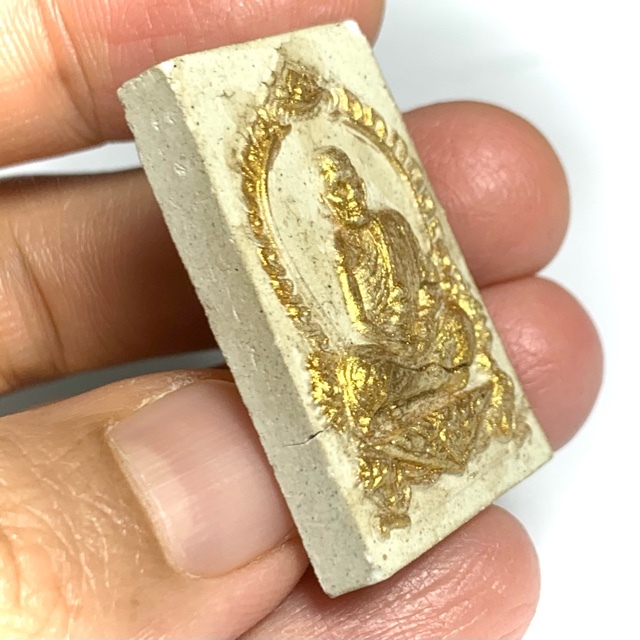 It is told that those who Bucha his amulets will be protected from 'Dtaay Hoeng (premature deadly accidents), and that the Devas will Protect the wearer of his amulets. 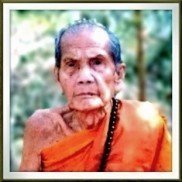 The word 'Hmun' means to turn and increase (revolve). Luang Phu Hmun always foretold that those who Bucha his amulets, would turn their luck and fortunes around, and increase their Business Success. He also foret: 16px;"> This amulet is an extreme rarity and is in pristine condition and highly eligible for show in competition. Considered extremely powerful protection and prosperity magic from this legendary miracle monk, and one of the most well known amulets of his pantheon. A true Pra Niyom amulet of Master Class, for devotees and aficionados of Luang Phu Hmun Tidtasīlo's amulets, to treasure and wear with confidence of safety and good fortune 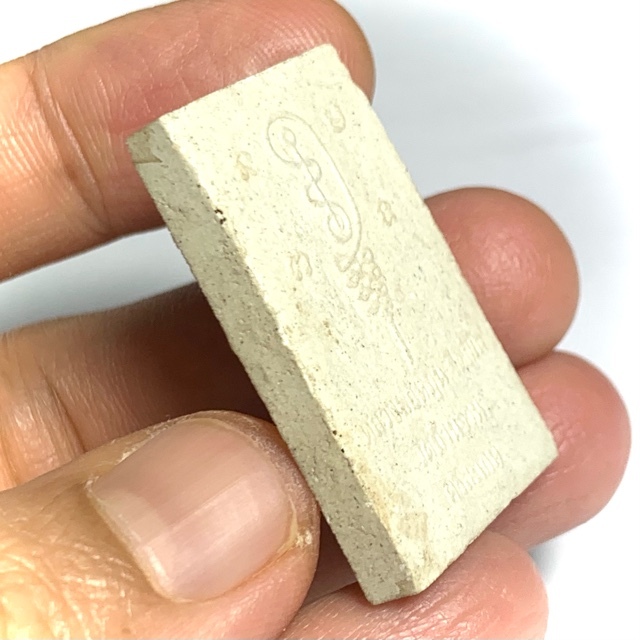 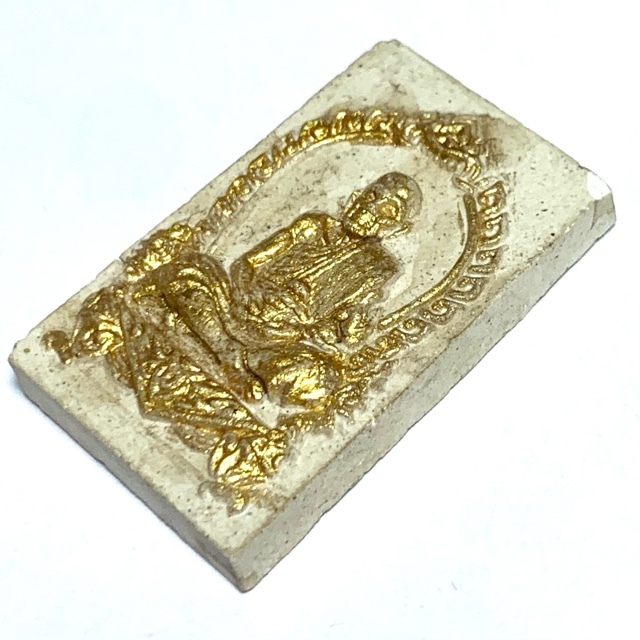 The Kata Bucha for Luang Phu Hmun Wat Ban Jan Tutorial is available as an MP4 download after purchase from within the downloads/files section of your account in the sales tab. 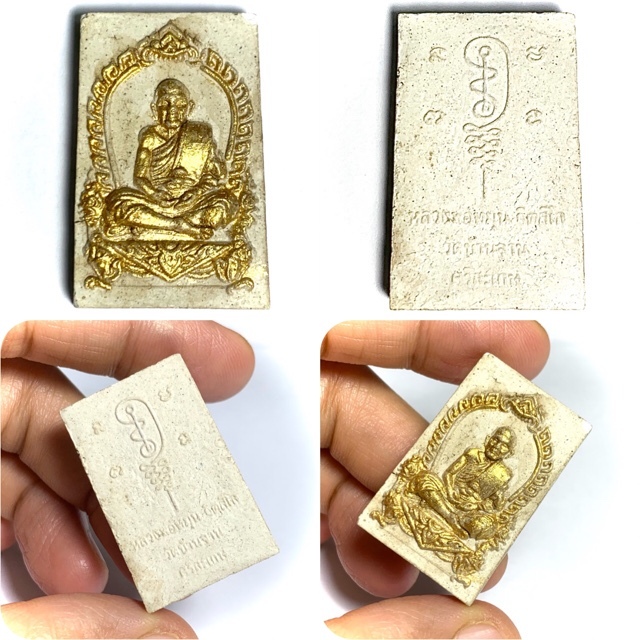