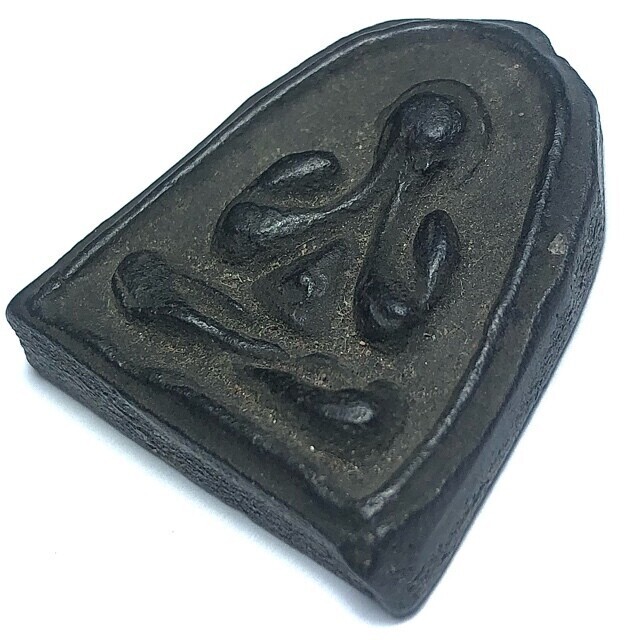 This is an extremely fine example of the Pra Pid Ta Hlang Yant Nam Tao, in Nuea Bailan Black Grimoire Parchment Soot Powders, from the 2513 BE Edition, In the very final edition of amulets made by the Great Jao Khun Nor, an Arya Sangha Monk of Historical Importance, who maintained a perfect, exemplary, and admirable trajectory of practice in his Patipata as a Buddhist Monk. 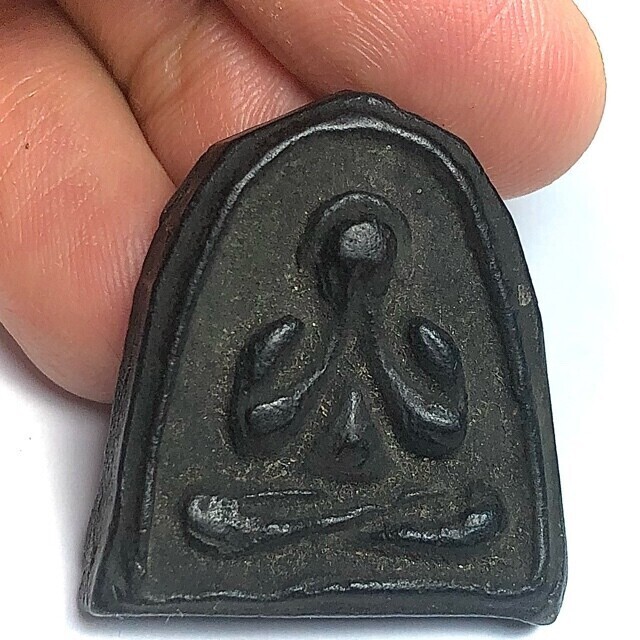 This series was made with various models of Pra Somdej, and Roop Muean Monk Images, in various kinds of color combinations, and in the case of the Pra Somdej, some were made in Nuea Sai Rung multicolored powders. This Edition is highly preferred, for the fact that Jao Khun Nor presided over this, his final edition Ceremony, and gave special Empowerments, along with a large array of other Great Master Monks, such as LP To (Wat Pradoo Chimplee), who would mostly accompany Jao Khun Nor in ceremonies. 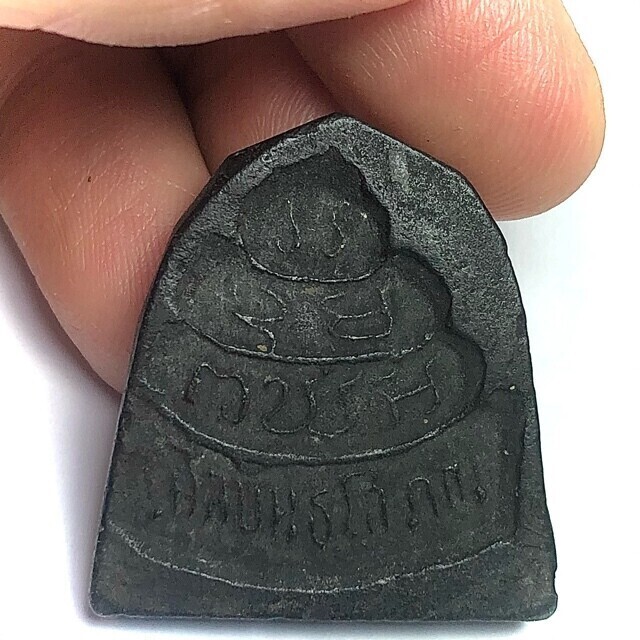 Released in Buddha Abhiseka Ceremony at Wat Silakhant in the year 2515 BE, with Blessings from Kao Khun Nor and a host of Great Masters of that Era, including the Great Luang Phu To, of Wat Pradoo Chimplee. Jao Khun Nor was a Arya Sangha Guru Monk, whose Magical Powers as far as amulets are concerned are undisputed, and are known for their Metta Mahaniyom, Maha Lap, Klaew Klaad, and Serm Duang properties. 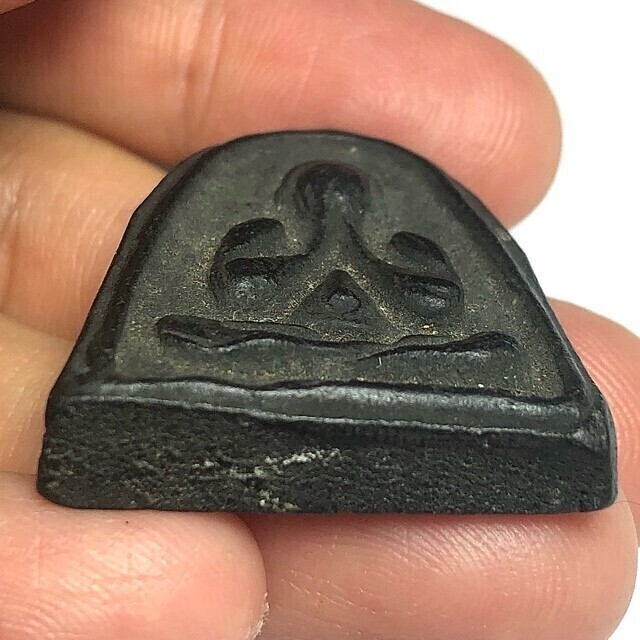 Below; various different color combinations found in the Pra Somdej and other amulets, which were also released in this final edition pantheon of Jao Khun Nor 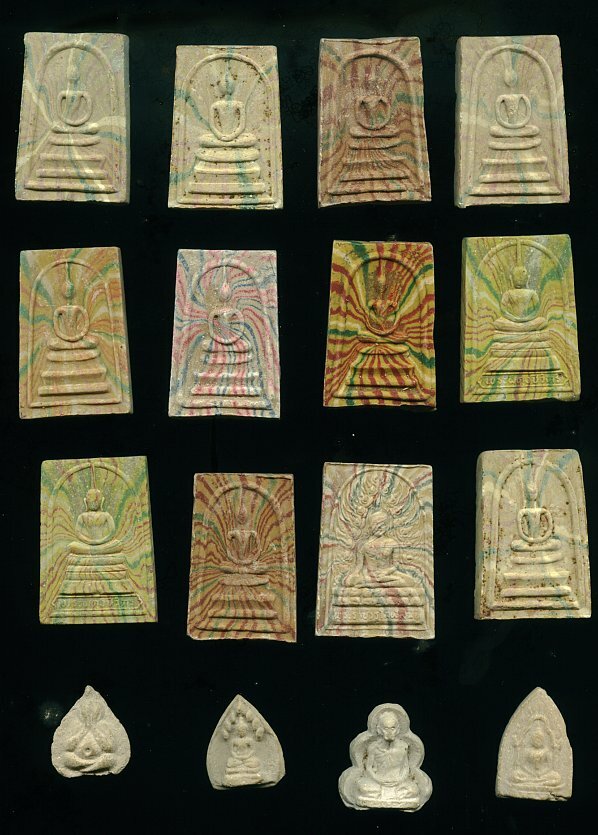 A most recommendable amulet for the Family Heirloom Collection, and to Wear, with no black magic, and pure Buddhakun Blessings. Increase Wealth and Treasures and Klaew Klaad Protection, Serm Duang (Improve Auspicious Karma). The amulets were made using Pong Bailan Grimoire Powders, with Din Kakyayaks black sacred peat marsh earths, and also using dried Bai Tong (banana leaf) ,which Khao Khun Nor would use to place his food on and eat from (used in olden days instead of a plate), in his Kuti Hut, which were mixed with old Muan Sarn Sacred Powders from previous editions of amulets made by Jao Khun Nor, and other Muan Sarn donated by Many Great Masters. 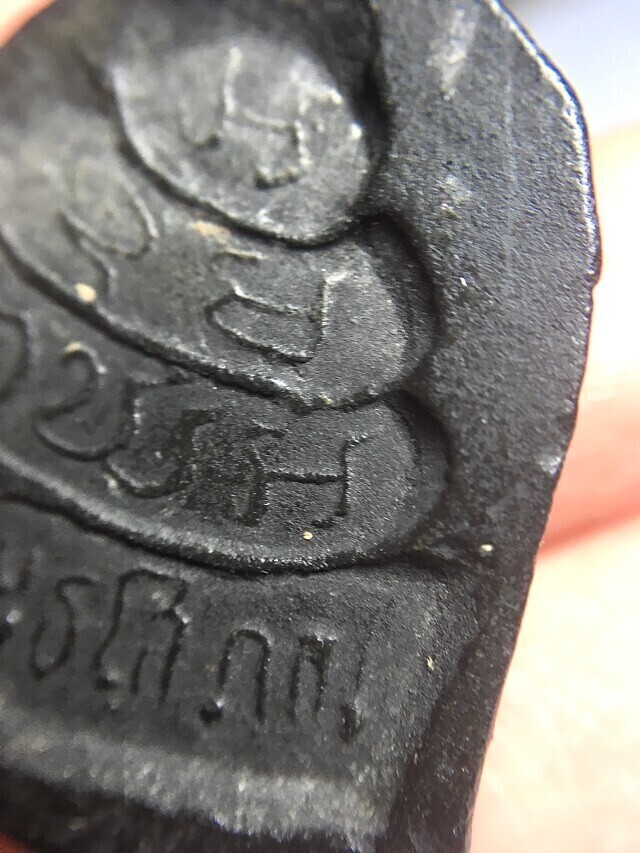 The Yant Nam Tao (also known as Yant Ongk Pra/ Yant Bai Po), is visibly embossed on rear face of Amulet. The Muan sarn of the amulet is extremely dense and hard. The features of this amulet have endured excellently and are still extremely crisp and refined, making it extremely eligible for competition entry.

Jao Khun Nor, was born on the 5th february 2440 BE, close to the temple of Wat Somanas Voraviharn in Bangkok with Somdej Pra Putta Kosajarn (Luang Por Jaroen) as his Upachaya. He Ordained into the Buddhist Sangha, in the Year 2468 BE. Jao Khun Nor was Extremely Revered for his Immense Patience, Diligent Efforts, and Merciful Personality. His Selflessness was highly noticeable, and his trajectory led him to become one of the most highly revered and respected Monks in the whole Nation, both by Devotees, and amongst his Peers in the Sangha. 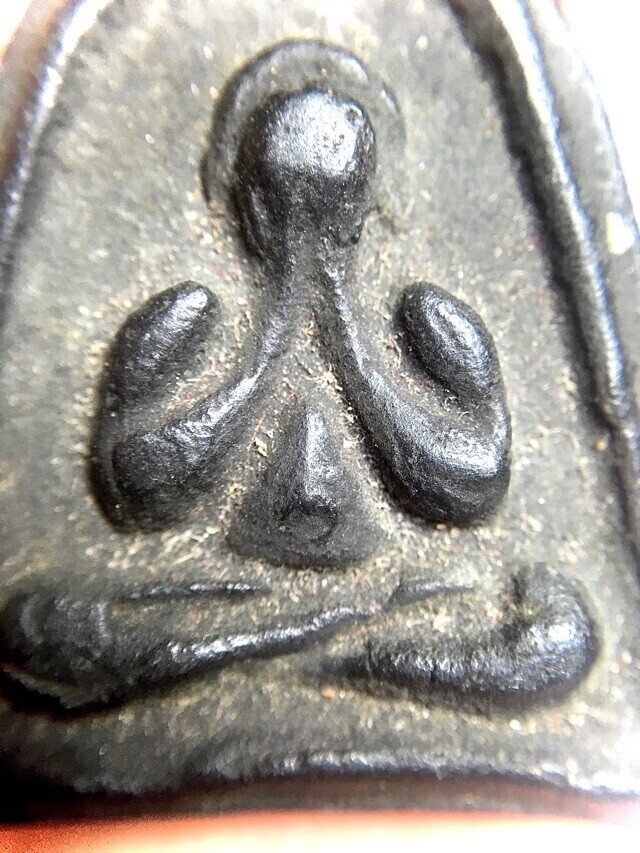 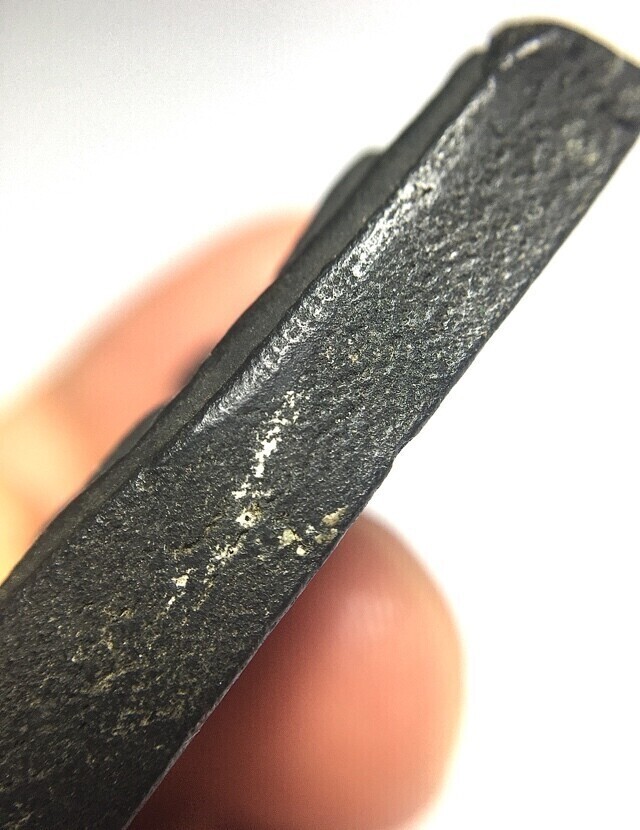 Jao Khun Nor died in the year 2514 BE at the age of 74, after 56 years of Diligent Service as an Ordained Monk. He passed away, after suffering a long time from a terrible cancer on his neck, which he suffered throughout his final time, but which disappeared just before his death, and which was an extremely large protuberance with a very painful open wound. But Tan Jao Khun Nor still went to every morning and evening prayer chanting of the Uposadha Chapel and would sit and give Dhamma sermons as usual, and never once showed that he was in pain in front of the Devotees, which is unimaginable to any normal Human Being. 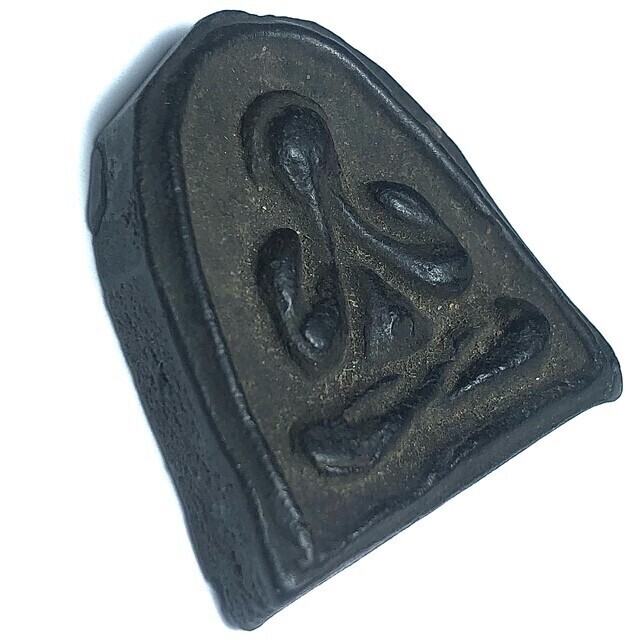 Above, a picture of the Great Monk Jao Khun Nor, during the time he suffered with extreme throat cancer, but remained practicing as usual without fail, maintaining complete diligence, without taking a rest. The open wound of the Cancer disappeared before his death, despite the fact that he refused any special treatment apart from letting Dr. Paibun clean it regularly (after which he would always give blessings to everybody chanting the Chinabanjara Kata). He said 'The wound came by itself, and so, it should also leave by itself. 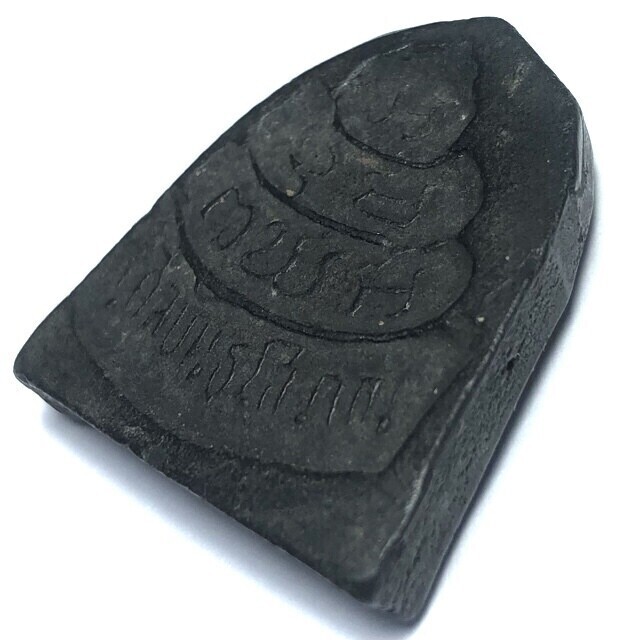 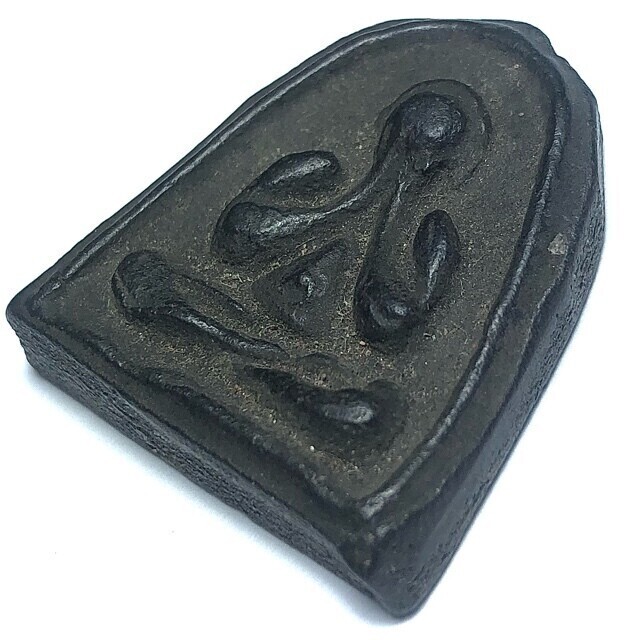 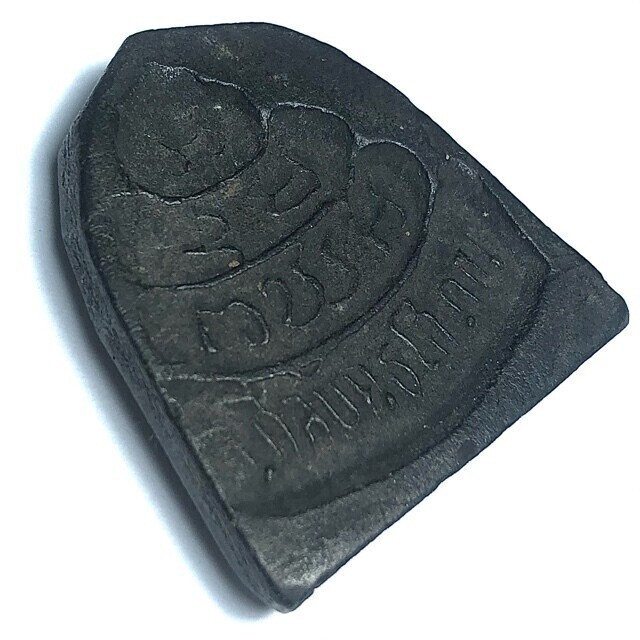 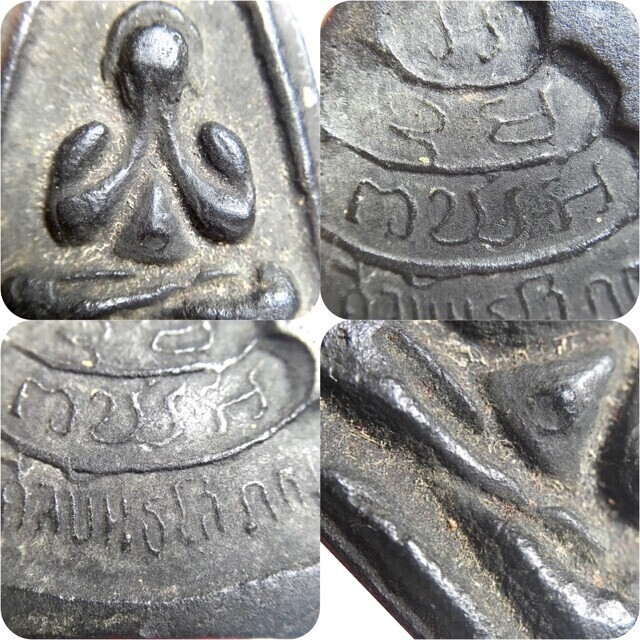 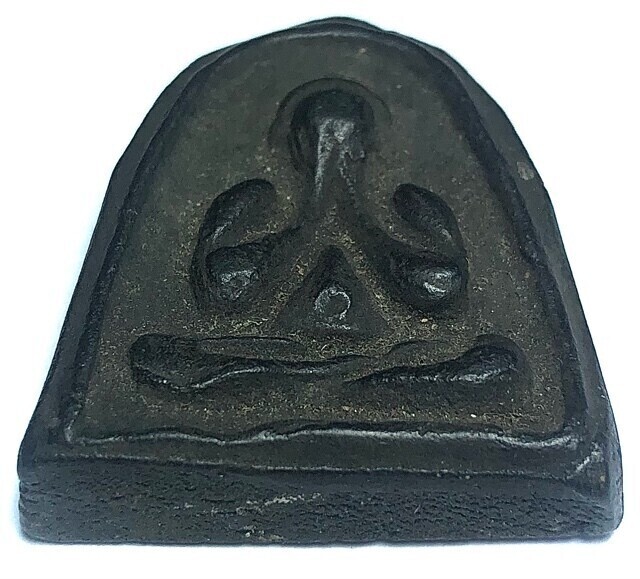 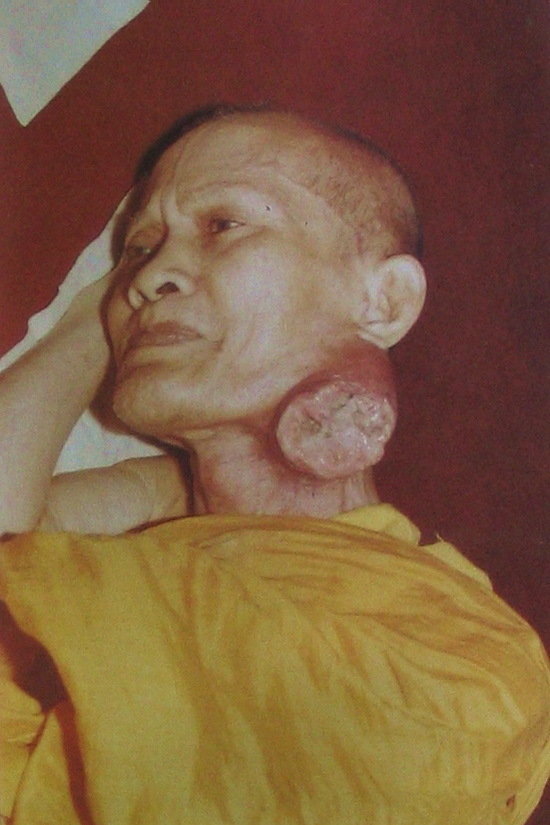 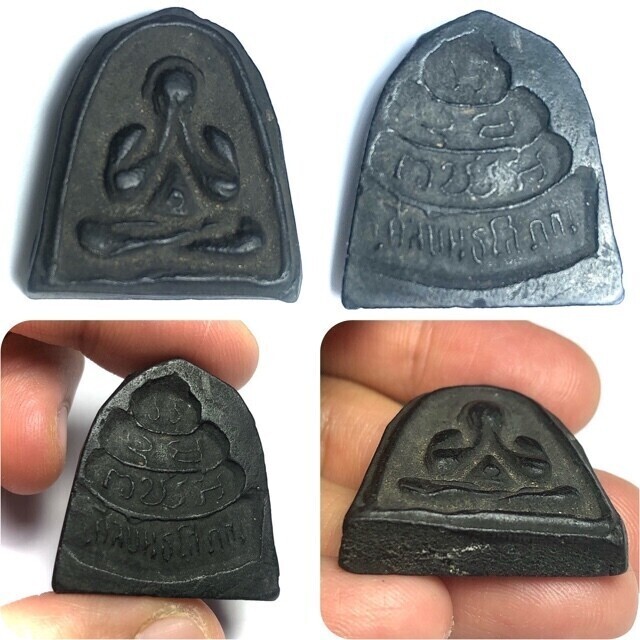