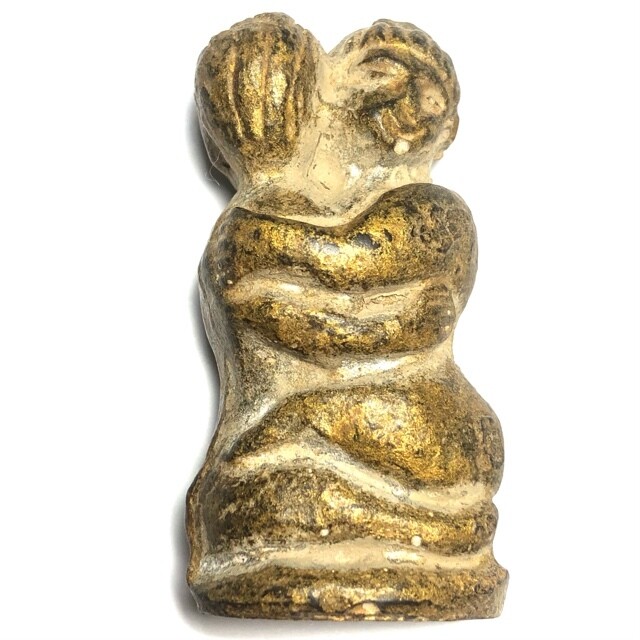 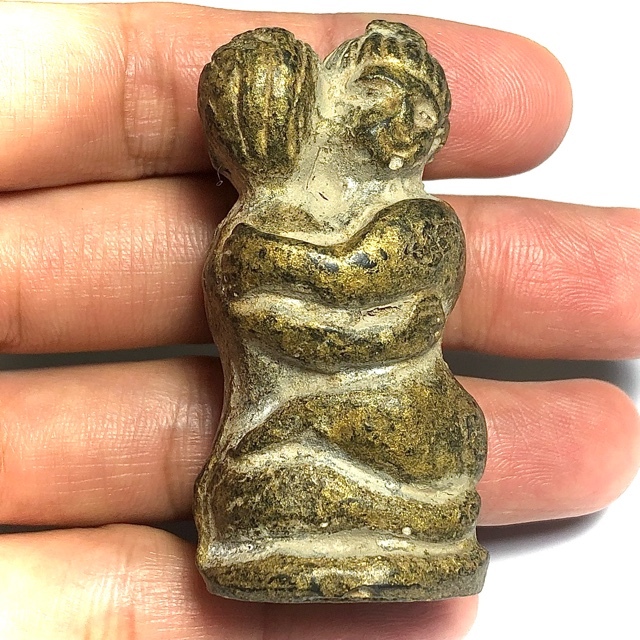 The surface midlews on the amulet, and the aging characteristics of the carved wooden image itself, reveal true ageing of a centenarian+ amulet that shouts out the word 'ancient'. Kroo Ba Nanta was probably most well known for his Pra Rahu Amulets, which are so highly regarded, especially those made as Ban Neng forehead bones with Necromancy, as well as Paya Khao Kam, Palad Khik Nang Lorm, and In Koo, but these amulets are much rarer to find, if not next to impossible. The In Koo (also known in South East Asia as ‘Yin Tong’) is a symbiotic Deity in the form of a Man and a Woman embracing each other. It is a magical animist effigy which ancient people believed represents the first ever pair of Man and Woman (male and female) in the History of the World, and is a symbol of Love between a man and woman., or even same-gender gays, and Magic is hermaphroditic in Nature. 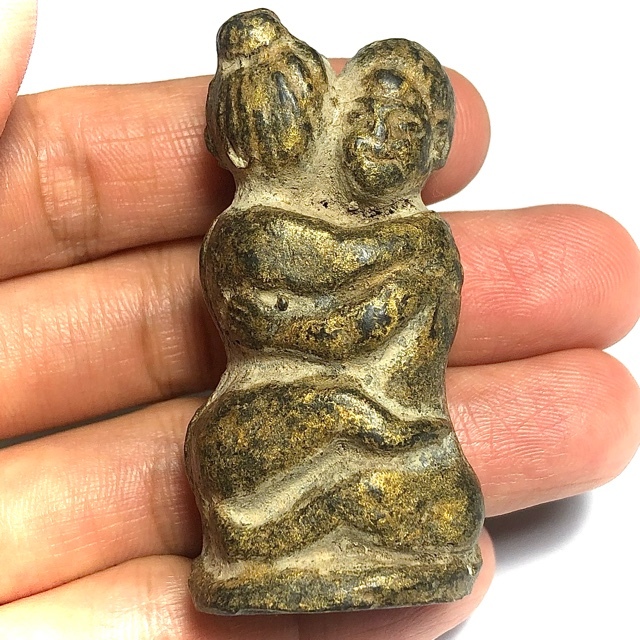 It is believed that the holder of an In Koo Talisman is endowed with Maha Sanaeh power over the other sex, and that they will feel attracted to the wearer of the In Koo, and wish to approach and get to know you. If they approach then they will be helpless against the attraction power of the Palad In Koo. This is the Love Charm Magic of Maha Sanaeh (Charm and Attraction). If the In Koo is kept in the House, then all the family and people in the household will love each other and be happy together. If it is worn as a love charm or carried on ones person, then it will cause everyone the wearer meets to feel friendly and compassionate towards them, and even make others fall in love with the wearer if Bucha is made to the In Koo, and this request is asked for in exchange for Bucha. Business will flourish, money and gifts will flow in, good fortune will come, and life without disturbances. The In Koo is a sacred Love and Metta Maha Sanaeh Talisman which has been used by ancient folk for thousands of years, and shows no sign of disappearing soon, for its popularity as a love charm is still as evident as it ever was.

Free Registered Express Fed-Ex/DHL/EMS shipping Worldwide is included with this amulet. The amulets of Kroo Ba Nanta are a very rare thing to come by, and his Maha Sanaeh and Karma Improving amulets, are highly revered by Business Owners, Traders, Gamblers, and those who are in High Administrative Positions, as well as those who seek to turn their fate around. Kroo Ba Nanta was one of the Greatest Lanna Masters in Living memory, before whose time, little is known of the names of the Masters who lived, so long ago was his Era. 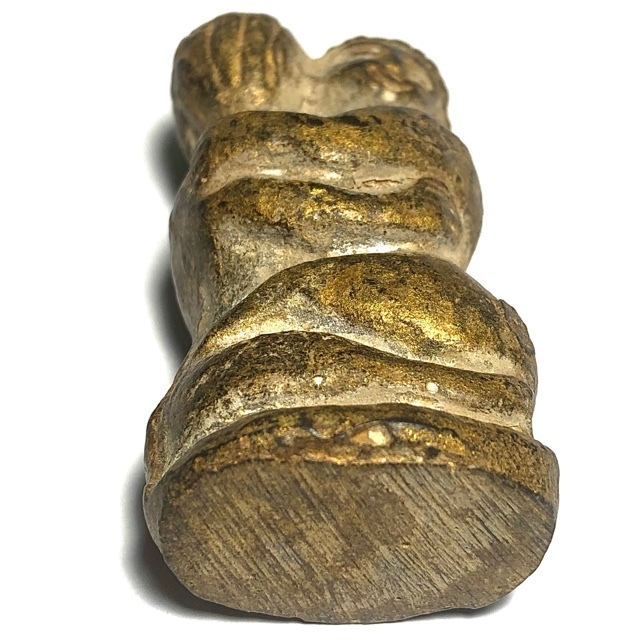 Because of this, and his constant absence on forest Tudong wandering,, it is not known when Kroo Ba Nanta began making Amulets, nor how many he made, except that old people who lived during his time, say that he had made them as long as they could remember. Many different shapes and forms of Thai Lanna amulets can be found in the pantheon of KB Nanta in documentations, (but not so easily found for sale/rent), as well as many undocumented forms, which do not exists in books. But the trained eye can recognize his inscriptions, and the natural ageing process of the coconut shell, ivory, wood or sacred powders used to make the amulets he empowered. 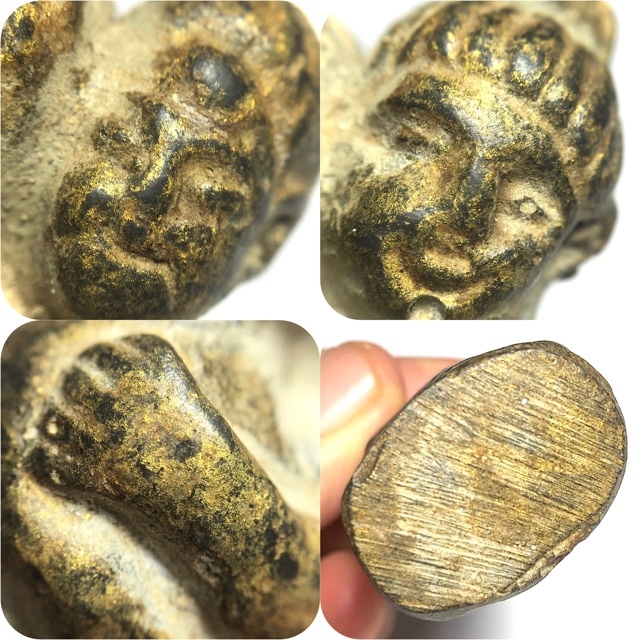 The earliest actual evidence of his making amulets was found inscribed on a Kala Ta Diaw Rahu Image with the year 2456 BE, which is considered to be one of his earlier one eyed coconut shell carvings.However, it is evident that if such a quality powerful master-class amulet was found from that year from this Guru, then it can be assumed he was making and distributing Talismans long before this. Kroo Ba Nanta Nanto Bhikkhu was considered the older of the 2 Greatest Masters of the Wicha Pra Rahu, Wua Tanu In Koo, Ma Saep Nang, and other Thai Lanna Sorcery Wicha of that particular Era, along with Kroo Ba Noi of Wat Srisa Tong who became almost equally famed for Wicha Pra Rahu of Laoatian Hilltribe Lanna Tradition.

Kroo Ba Nanta was born in 2415 BE, and was indeed the older of these two Great Guru masters of Wicha, both of whom were famous for the Pra Rahu, In Koo, Takrut, Ban Neng, and also the Wua Tanu Sacred Arrow Bull animist charm. Many people believe that Kroo Ba Nanta was the Kroo Ba Ajarn of Luang Por Noi, because of the similarity in their Wicha Pra Rahu Kala Ta Diaw amulets, but this is in fact a myth. Each of these Masters had their own personal Trajectories and their amulets differ in style and empowerment methods. 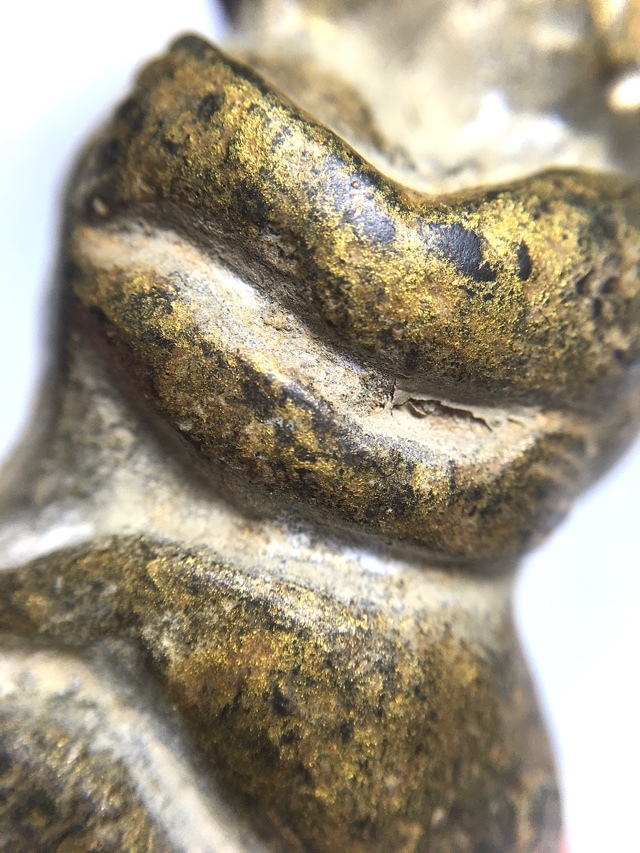 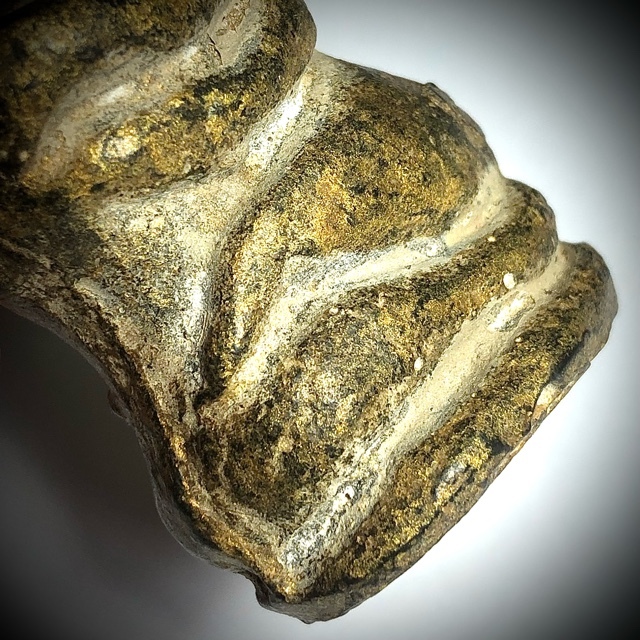 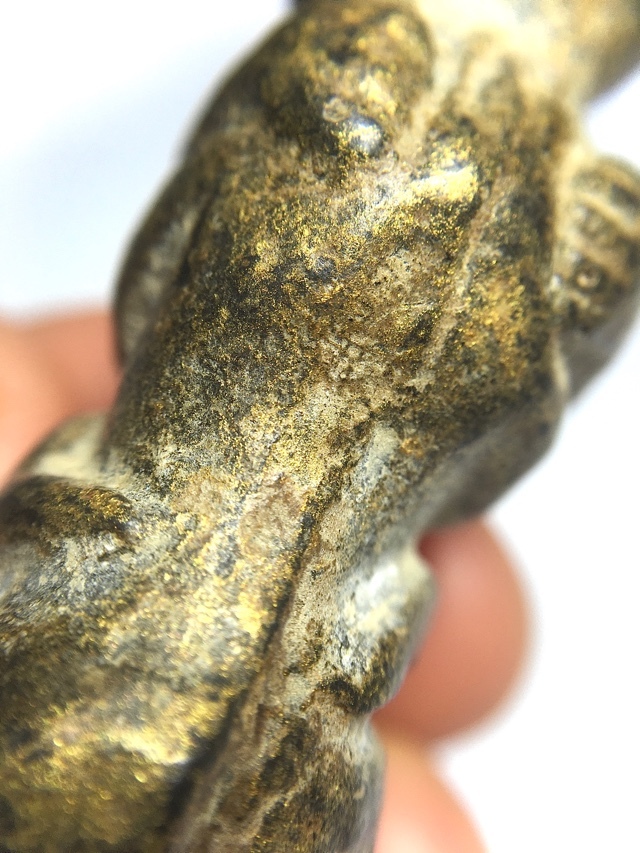 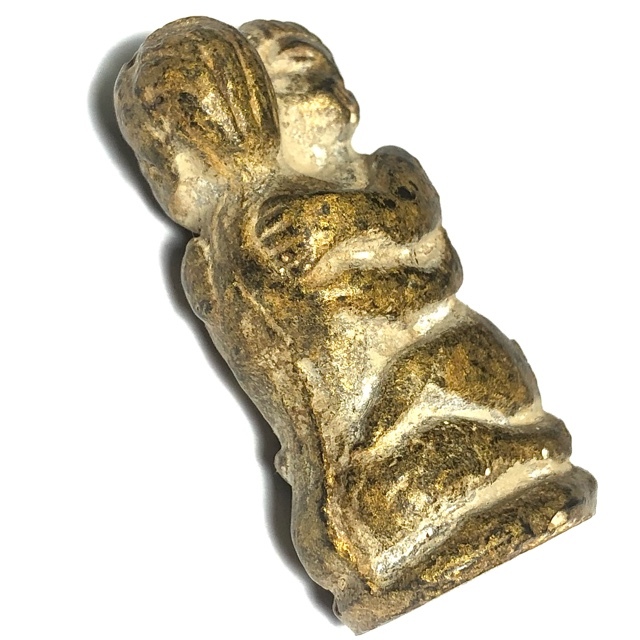 The In Koo Symbiotic Deva of Love, is carved in traditional style of the Northern Lanna Wicha, and has been treated with gold leaf, almost certainly appplied with the aid of Prai Oils to affix to the Sacred Mai Payung Wood. 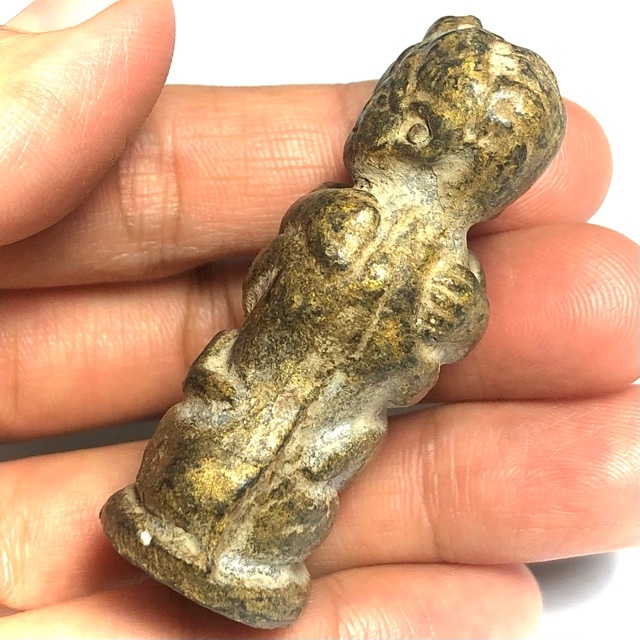 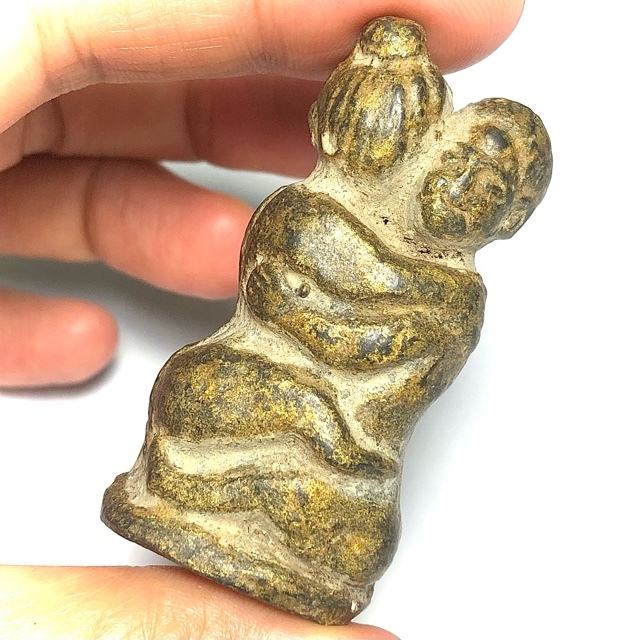 The In Koo Plord Rak, is just one of a number of different Animist Deva Spirits found within the Pantheon of Amulets which are catalogued as 'In Koo'. The In Plord Rak is a ‘Krueang Rang’ (Occult charm/talisman) that the Ancient Masters used to symbolize the Power of Love, and that this amulet endows the wearer with the power over the minds of those of the other Sex (or same Sex if that is the Inclination). For those who already have a Lover, but who seems to be a little distanced and not too close, the In Koo Plord Rak is the best kind of charm to improve and increase the persons love towards you, and increase intimacy. 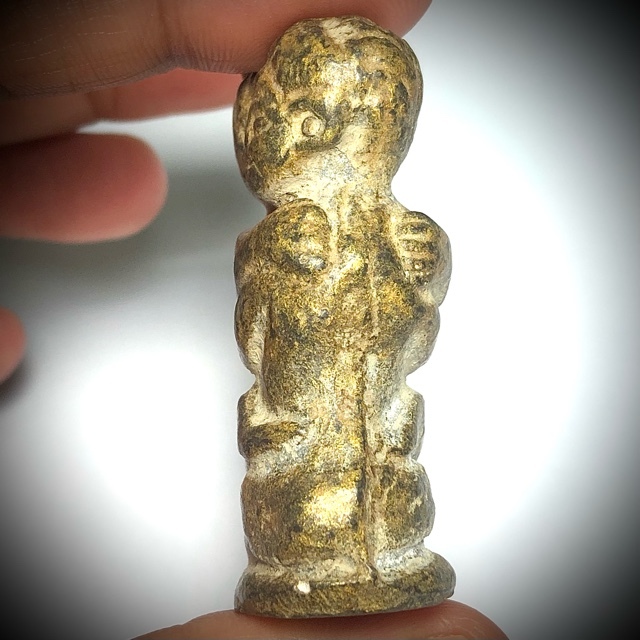 Is the In Koo for Men Only?

No. The In Koo can be worn and used by both Men and Women. For Choke Lap wealth increase, place the In Koo inside a money bowl or savings box. Before you put or remove any money from the box, you must tap or knock on the side of the container with the same hand you shall be using to remove or place money in the box with.

Chant the Kata 7 times before putting your hand inside the container. It is said that if you do this regularly, that money will never cease to flow. Those who perform this well will find time to sit and meditate and chant the Kata whilst tapping on the container. About 5 minutes each time is enough. 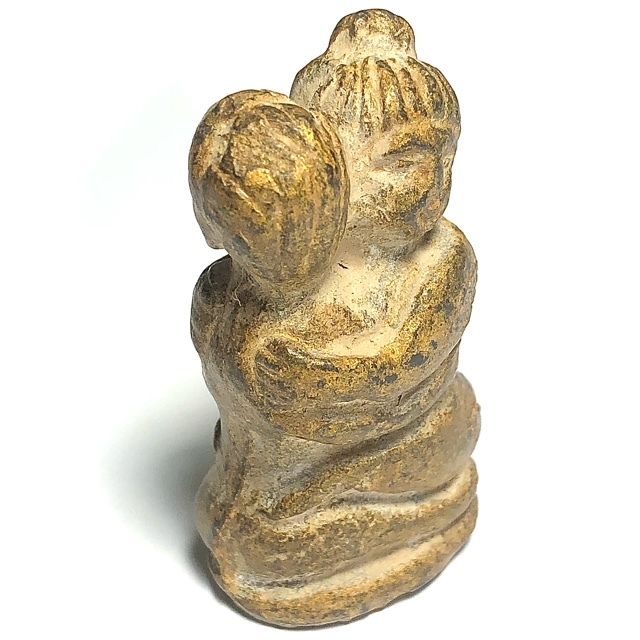 Kata for the In Koo (From the Great Kroo Ba Nanta)