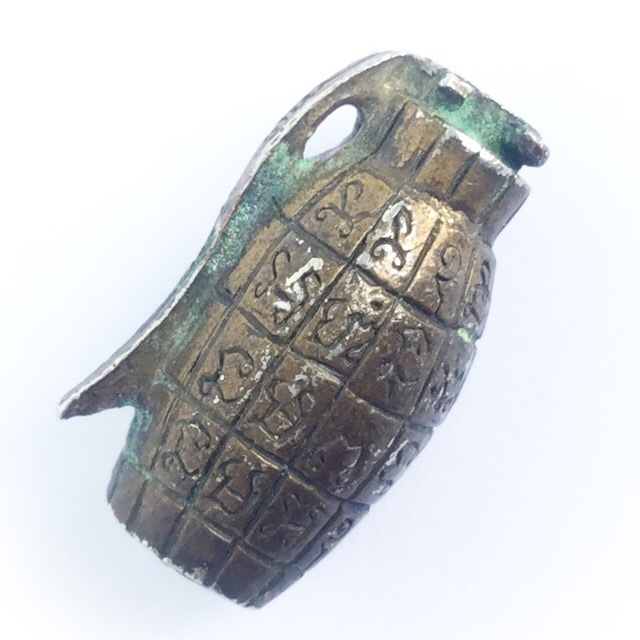 The Look Raberd of Luang Por Waipojana is already an extreme rarity, as well as immensely original amulet using Wicha Maha Pokasap Maha Lap. Released in 2550 BE at Wat sam Ngam in Nontaburi, the Grenade is made from Albaca Sacred Alchemical Alloy. 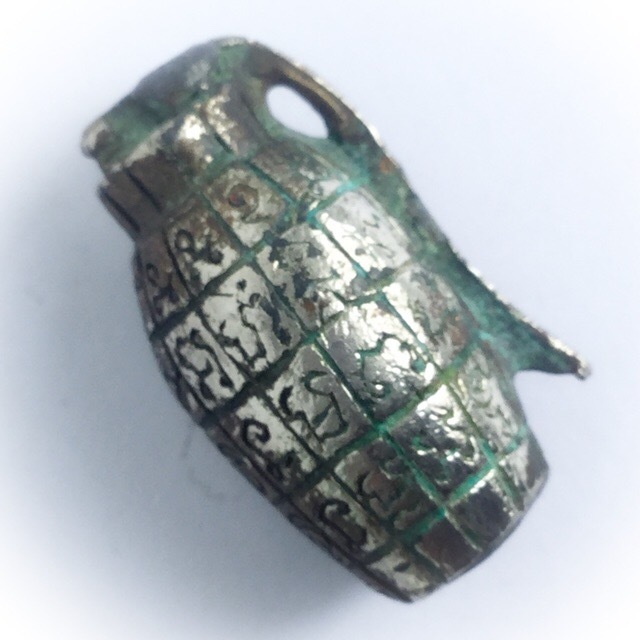 The Takrut Look Raberd Sap has a Sacred Alchemical leaden Alloy sealing spell with the code 'Na' Khom Agkhara inscription on the base of the grenade spell, with a Takrut Yant within its hollow interior, which is stuffed full of 'Rae Bang Pai' Lek Lai Kaya Siddhi Adamantine Substance related Sacred Elemental Muan Sarn.

This Talismanic Amulet is extreme Maha Pokasap Treasure and Wealth Increase Spell in order to lessen the sufferings of Humans, through easing the difficulties of life with wealth, and paving the way for the person who becomes wealthy, to forget the fear of giving, and be wealthy enough to slowly open up and create merits for him or herself, by being able to openly share some of the wealth to help and be kind to others, which in turn, builds positive thinking, and makes for a better world in the long run. 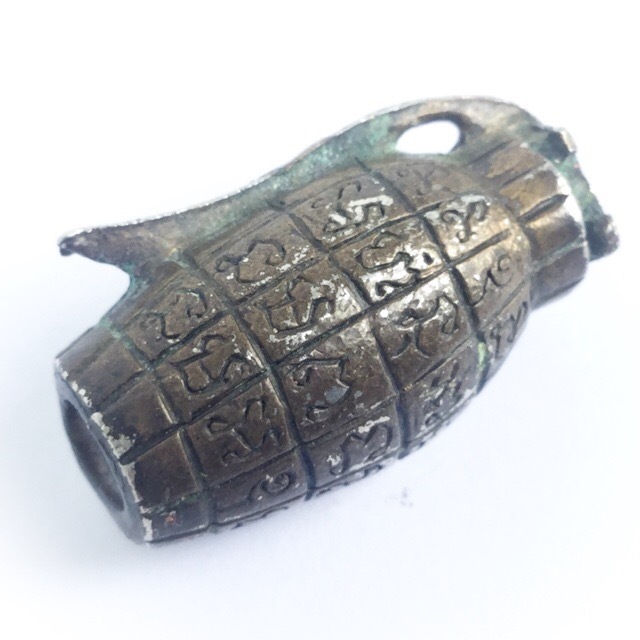 It is Wealth, that is for the lessening of suffering and stress that allows the heart to bloom and think kind intentions towards others. Otherwise, Wealth is something that generates greed in the hearts of Humans, and one may wonder what wealth seeking has to do with Buddhism. But in truth, if one does not follow the path of greed, and merely understands that wealth will free us from the fear of being generous to others, because we won't have to worry about having enough left over afterwards, and won;t need to get angry or afraid of giving. 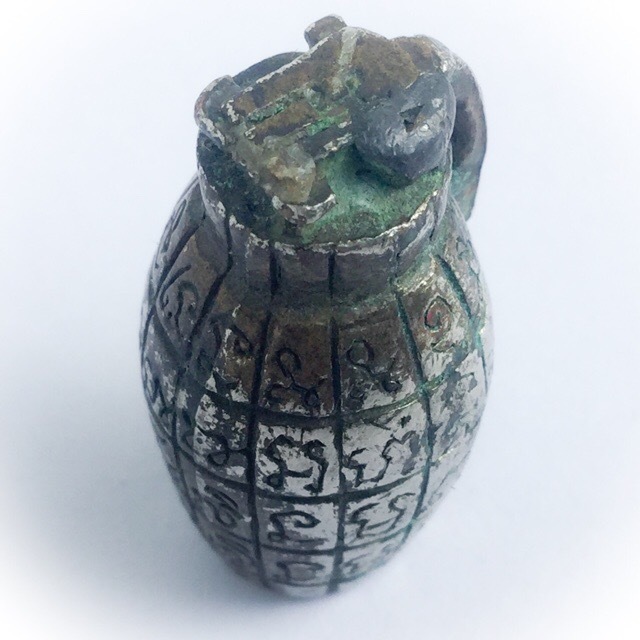 Hence, Wealth makes it possible to practice generosity and advance in Dhamma Practice, and Increase merits, and subsequently, good Heavenly Blessings and Rewards. One should not seek Wealthy personal rewards for greedy reasons though, rather, merely to alleviate one's own suffering, and after, the suffering of others too, and be free to be kind to others without worrying about personal finances.

The whole surface of the Grenade is covered in Khom Agkhara syllables which are Invocations of Elemental Powers, to generate a flow of Magical Energy, and Emanate Maha Pokasap Maha Lap Power to multiply one's wealth. 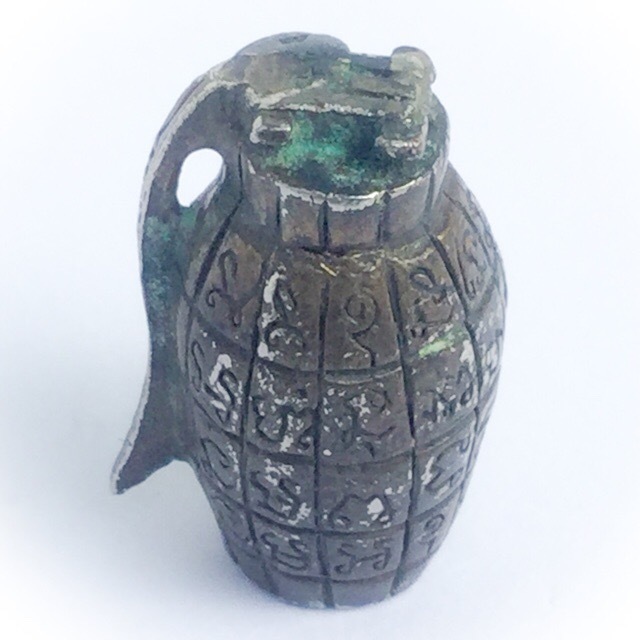 Anybody who would seek any of these editions of Takrut from Luang Por Waipojana, will find that they are all depleted, and only to be found in the possession of single owners, who mostly will not part with them. The Look Raberd has joined the ranks of those famous editions, and is now one of the rarest of all.

Luang Por Waipojana has always showed preference for Takrut making as ghis chosen form of Wicha for amulets, because he has Mastery over it more than other Wicha, for having learned Khom Agkhara inscriptions and Sacred Yant from two Adept Lay Sorcerors; Ajarn Puang and Ajarn Kluean. 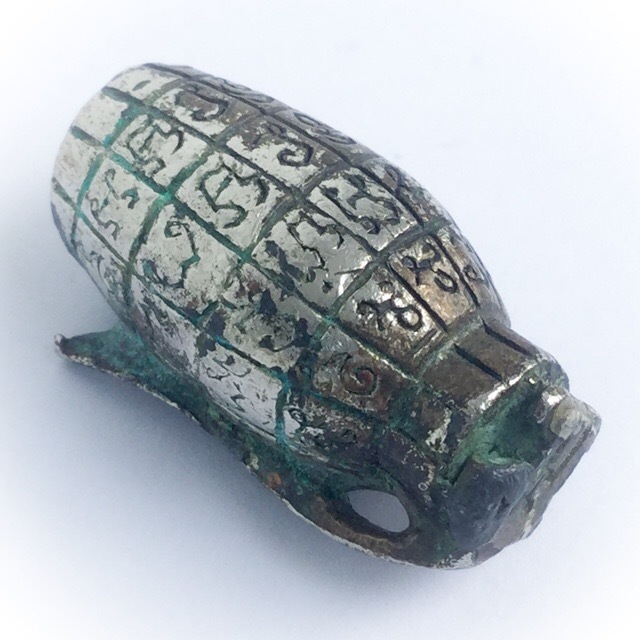 Luang Por made the Look Raberd Wealth Grenades to release and raise funds to finish the construction of the Uposadha Shrine Room (Chapel), which was still unfinished, and to construct a 2 storey 'Sala Ruean Pak' rest area for Lay Practitioners who came to practice Dhamma and Meditation, to dedicate and offer to His Majesty the King's 80th Birthday, on 5th December 2550 BE.

The Takrut Look raberd differs from all other Takrut, because of the Rae Bang Pai Loha Dhatu Alchemical sacred metal elements which are stuffed within the interior of the Takrut. 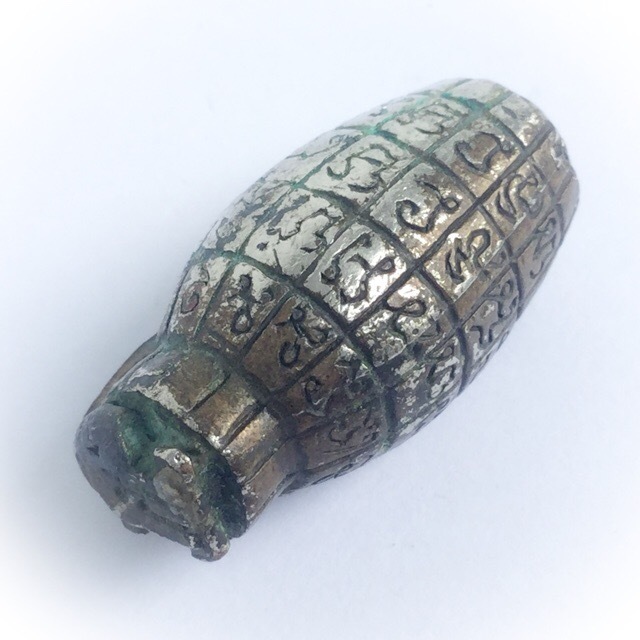 Rae Bang Pai, is a Kaya Siddhi Elemental Substance found only in the Earth, and Caves around the Area of Bang Bua Tong, in Nontaburi. It is a Sacred Substance empowered with Metta Mahaniyom, Maha Ud, Kong Grapan Chadtri, and Klaew Klaad Power from Natural Earth Magic, even without the interference of an Adept Sorceror's added Empowerment.

The exterior of the Look raberd is taken care of with Magical Power by the inscription and invocation of Khom Agkhara spells in the form of Syllables which encode the summoning, mixing and turning of the 4 Elements for Reanimation of the Magic Spell, and the Kata Invocation of the Hua Jai Ittirit Heart Mantra of Supernatural Power. 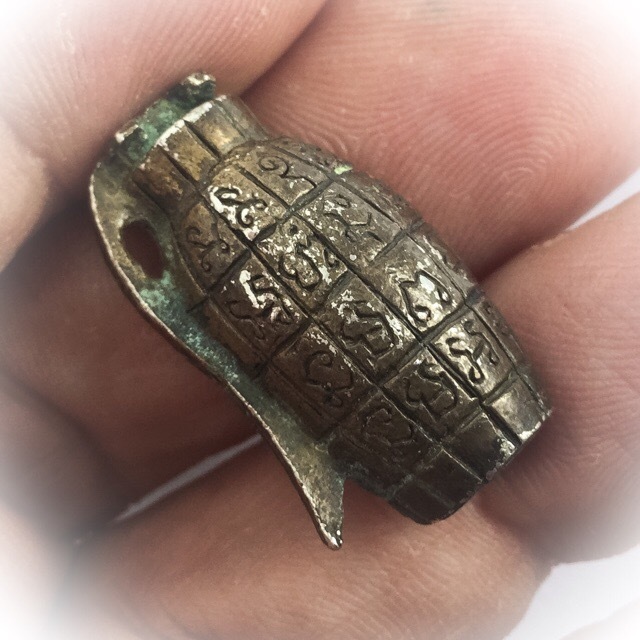 The Look Raberd is also a 'Kring' because it rattles when shook, and can call Wealth to it, or Forewarn of Dangers, or Lucky Windfalls. You should check if you feel good or wary when it warns you, to distinguish if it is warning of Danger, or of Lucky Windfall. 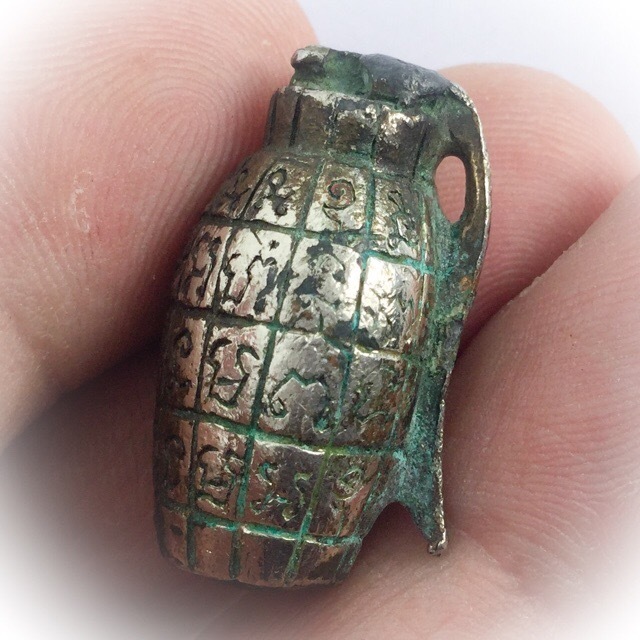 In addition, it is to be noted that the amulets were taken and placed in Herbal Prai Oils and Metta Oils for Charging with Power, such as Nam Man Wan Jang-Ngang, Wan Joong Nang Wan Na Ma A U, Wan Maha Bpraab, Wan Bpraab Samutra, Wan Tipya Naedtra, and 12 different kinds of Wan Paetch, which were namely; 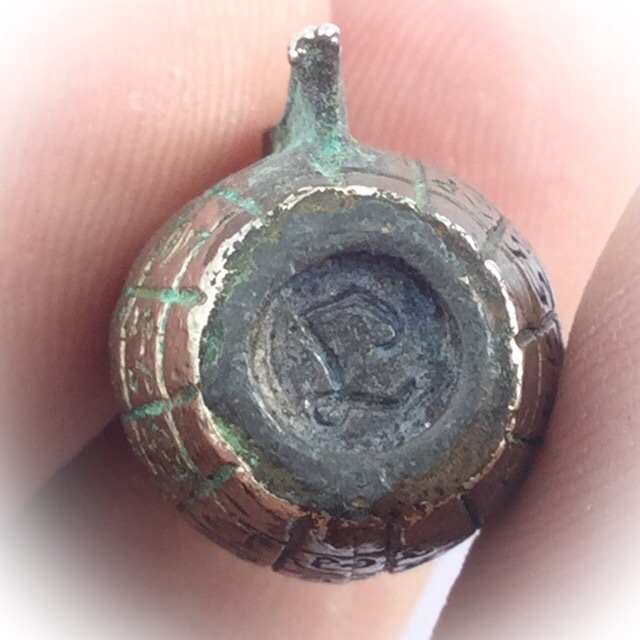 Sacred Code 'Na' Agkhara in Khom is embossed onto the Leaden Seal Spell on te base of the Grenade. 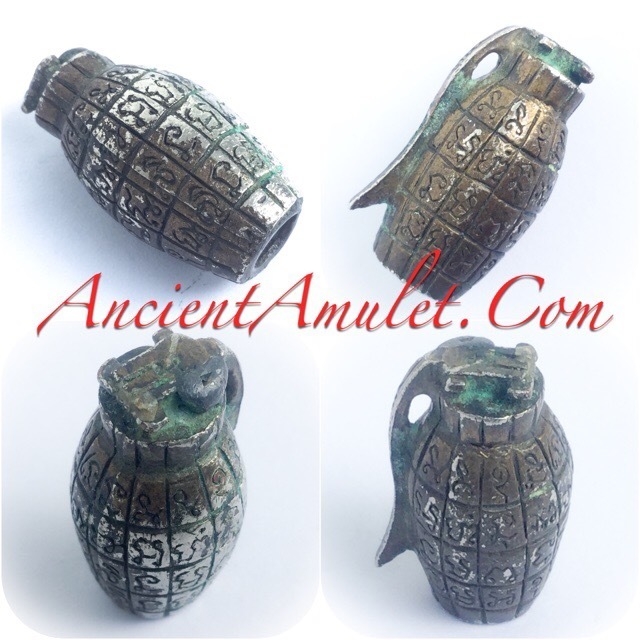 The Look Raberd Yant is hence a Powerful talisman for both Immense Wealth Increase, Protection, and Evasion of Deadly Dangers 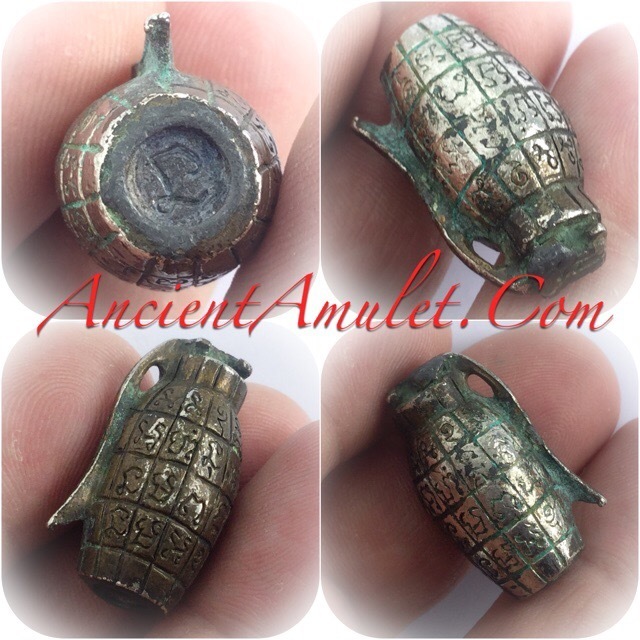