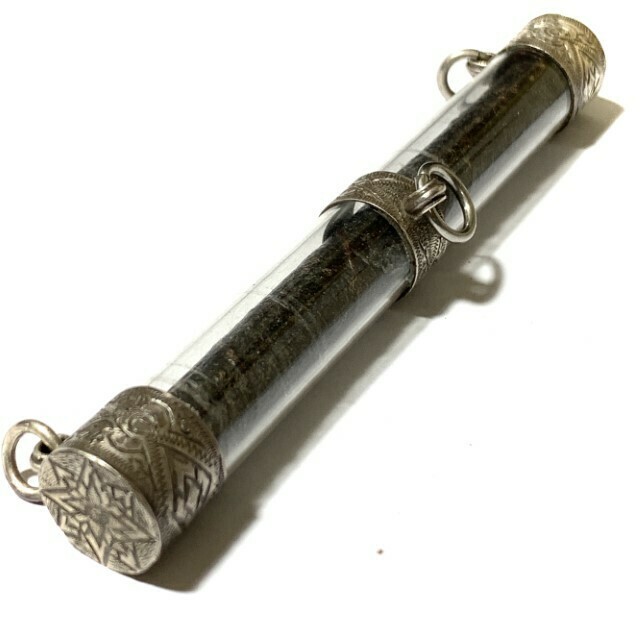 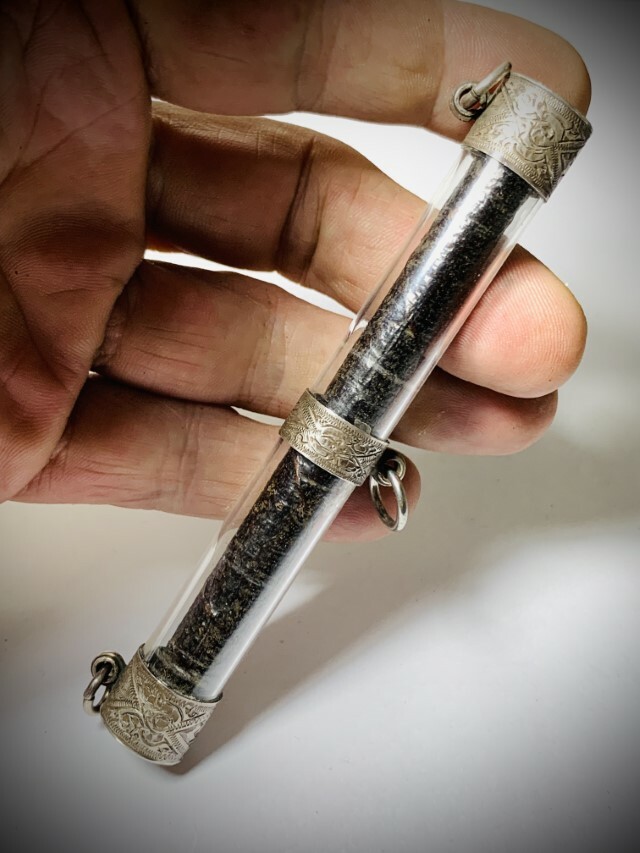 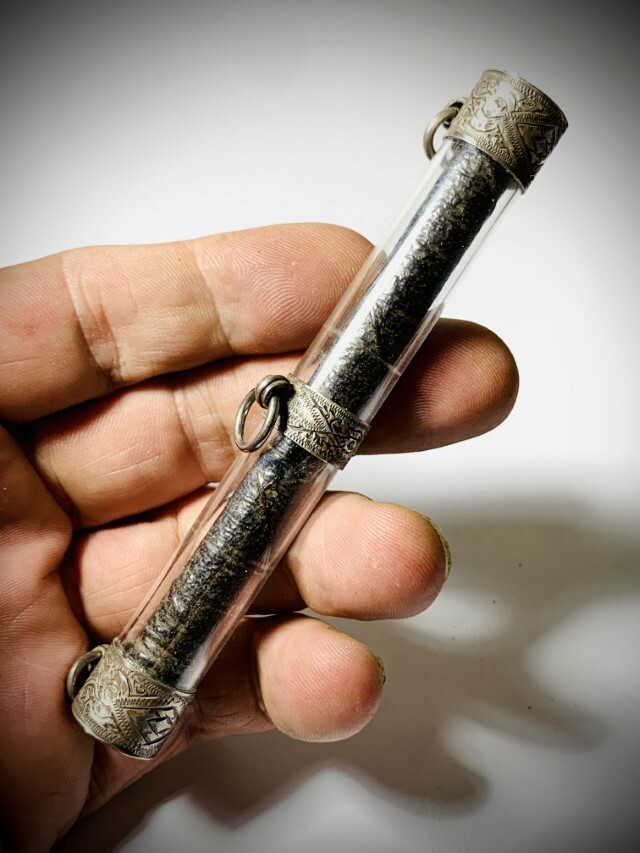 Free EMS Shipping Worldwide is included. The amulet has a beautiful texture on the lacquered surface over the cord when viewed up close under an eye loupe or macro lens, with evident bubbling of the herbal red chinese lacquer (Rak Jeen Boran), a result of natural aging, through the many decades of time that have passed, and through contact with the skin of devotees, and is a most pristine example of a prizewinner master class exhibit of the Takrut Tone Maha Bpraab Kong Grapan Luang Por Parn. 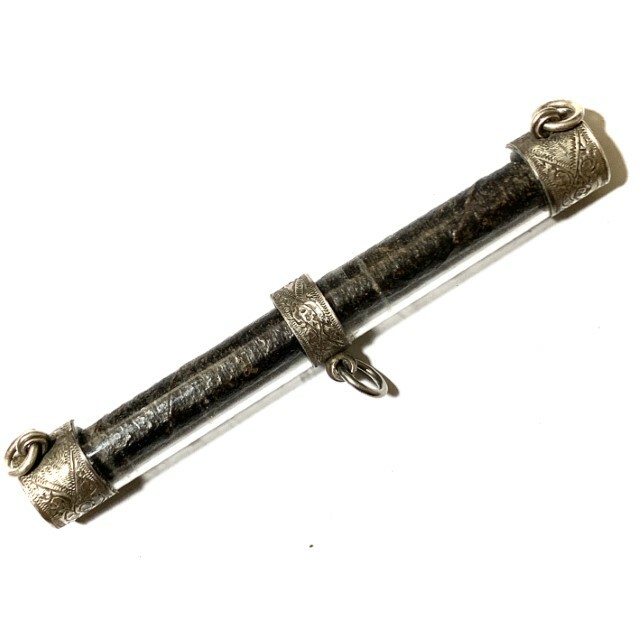 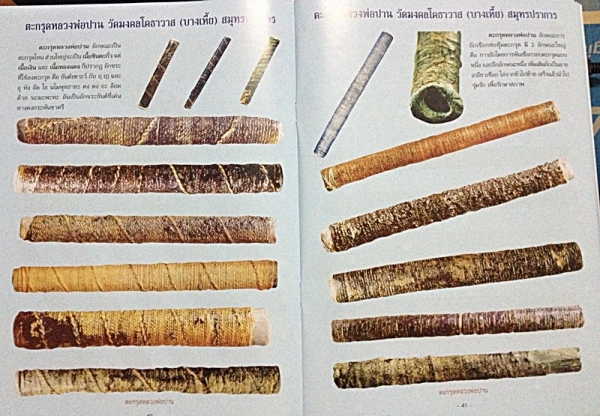 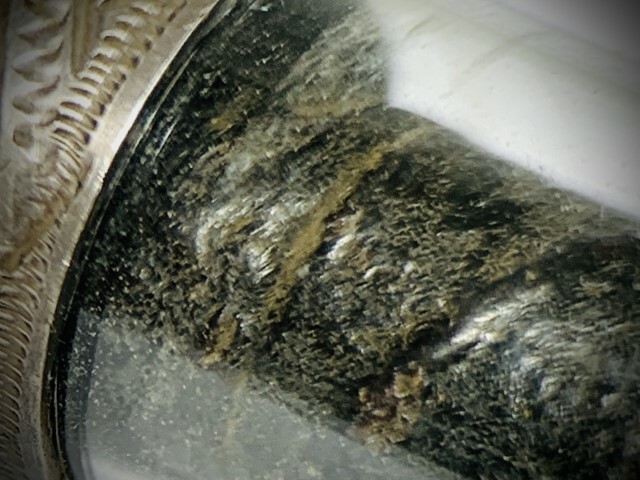 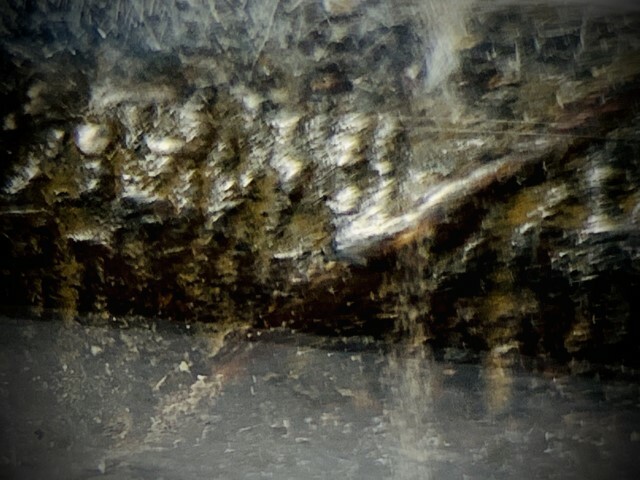 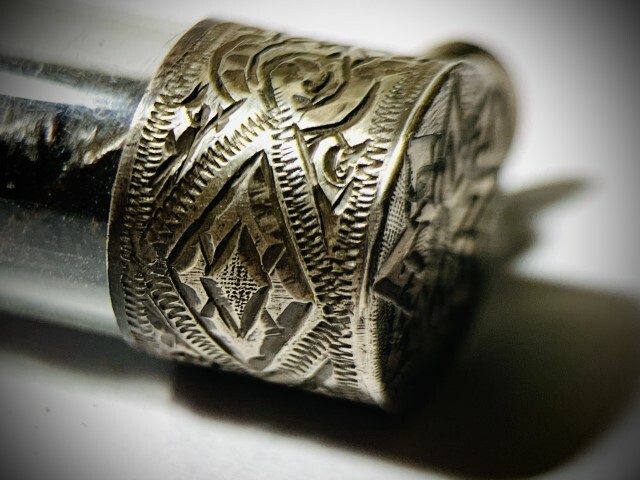 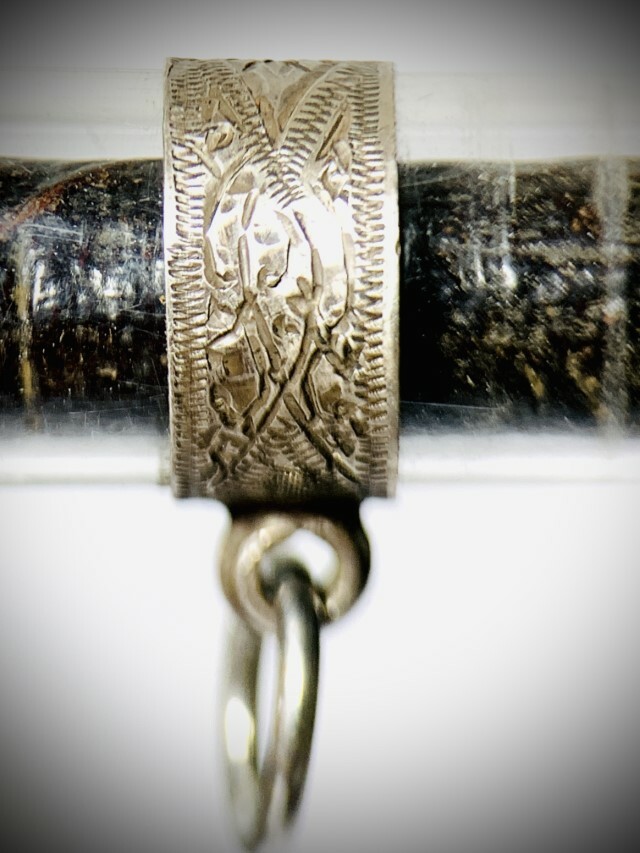 Many people think that Luang Por Parn of Wat Klong Dan is a different Master to the Luang Por Parn of Wat Bang Hia, but this is a Myth, that is perpetuated by people's ignorance of the fact, that wat bang Hia, in Bang Bor, Samut Prakarn Province, is a different temple to the temple of Wat Klong Dan.The truth is however, that the word 'Hia' which means both 'monitor lizard' (which is the true reason for the temple being named Wat bang Hia, due to a lot of Monitor Lizards being around in those days), also is a swear word, meaning 'very bad person'. Because the name of the temple of Wat Bang Hia was seen as Inauspicous to some people's ears, it was changed to 'Wat Klong Dan' 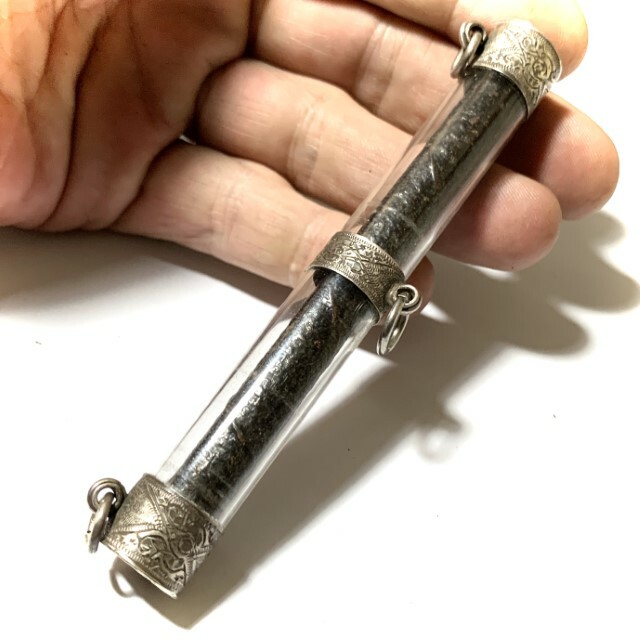 This is why much confusion has occurred with those who have not studied the Dtamra of Luang Por Parn and related Masters of this Temple, may believe there are two Masters famous for Tiger Teeth both named Luang Por Parn, tow Masters famous for tiger teeth named Luang Por Say, for they are both sometimes stated to be of 'Wat Bang Hia, and sometimes as coming from 'Wat Klong Dan''. Luang Por Parn was one of the Great Master Guru Monks of his Era (2368 - 2543 BE), and the originator of the Wicha for Tiger Amulet empowerment of this Lineage, using the Wicha of Wat Bang Hia. Wat Bang Hia is of course a World famous Historical Temple of Monumental Status in the Amulet Scene for the fact that this was the temple of Luang Por Parn, Master Wicha holder of making famous Tiger Tooth and Carved Tiger amulets, whose amulets are counted among the 'Maha Sethee' Millionaire master Class Category. 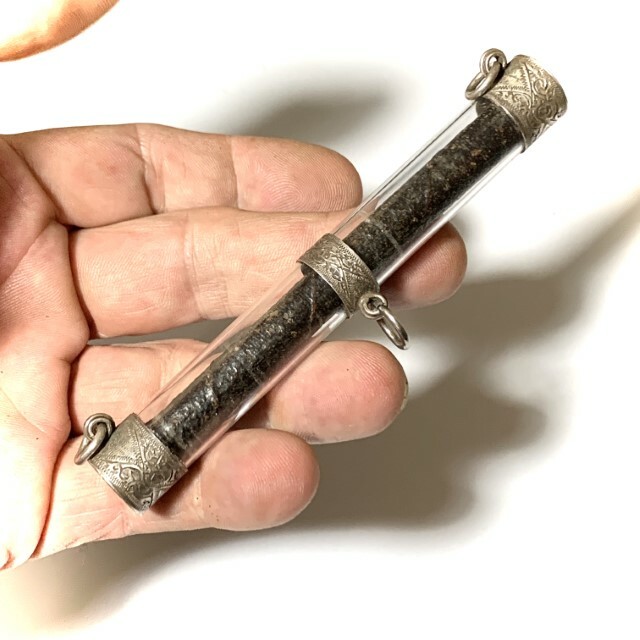 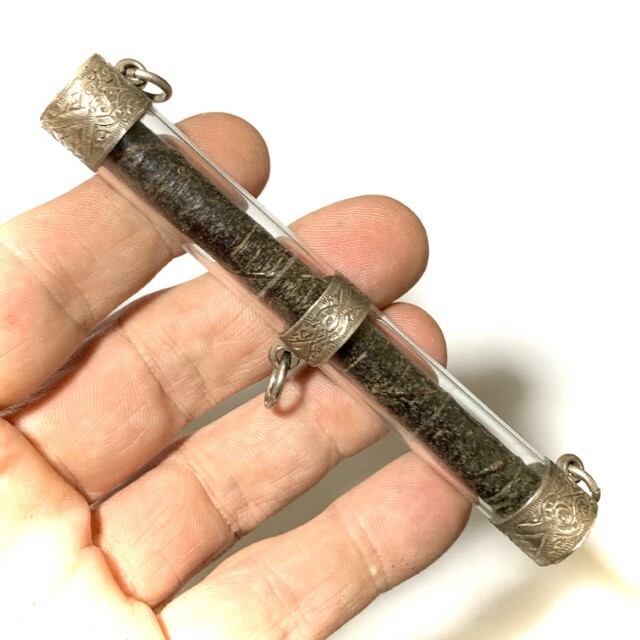 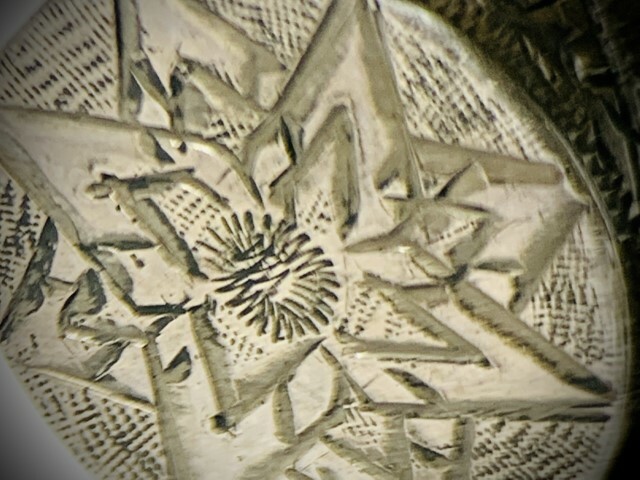 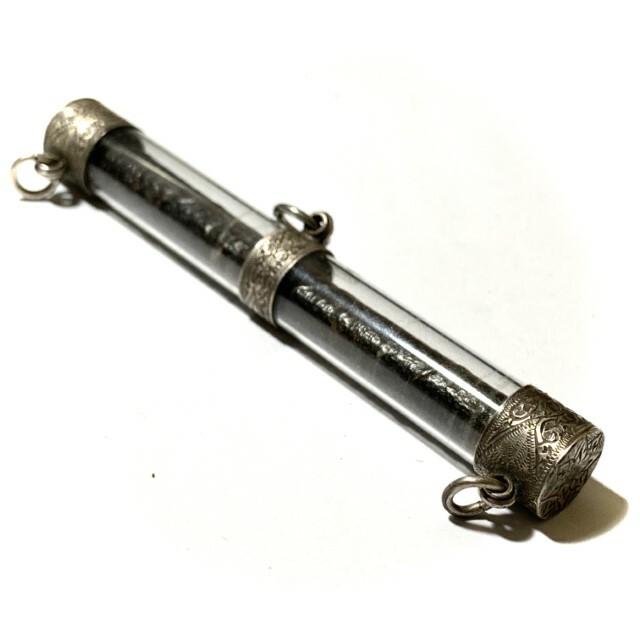 The amulet comes with traditional 3 ring silver casing, and free Express shipping worldwide included. The blackening of the ancient Chinese lacquer has developed through aging on the surface of the amulet through time, making this exhibit easy to see its true ancient age, making this an Ongk kroo 'teacher Model' for examination to teach the eyes to recognise the appearance of Chinese lacquered Takrut of this Era. The Takrut is eminent in appearance and instantly recognisable as authentic to the naked eye, and brings immense character and excellence to the amulet, revealing its evident age and distinguished status, adding to the Magick of Maha Amnaj Commanding Power, Dominion and Influence in its visual effect, which is Imposing in Itself at First Glimpse. 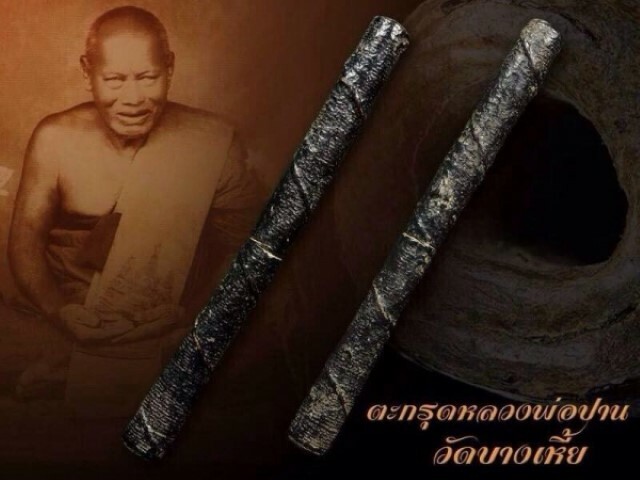 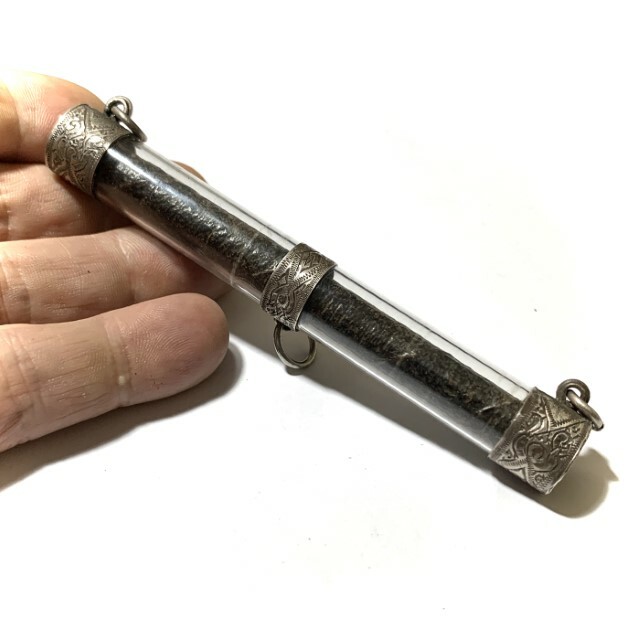