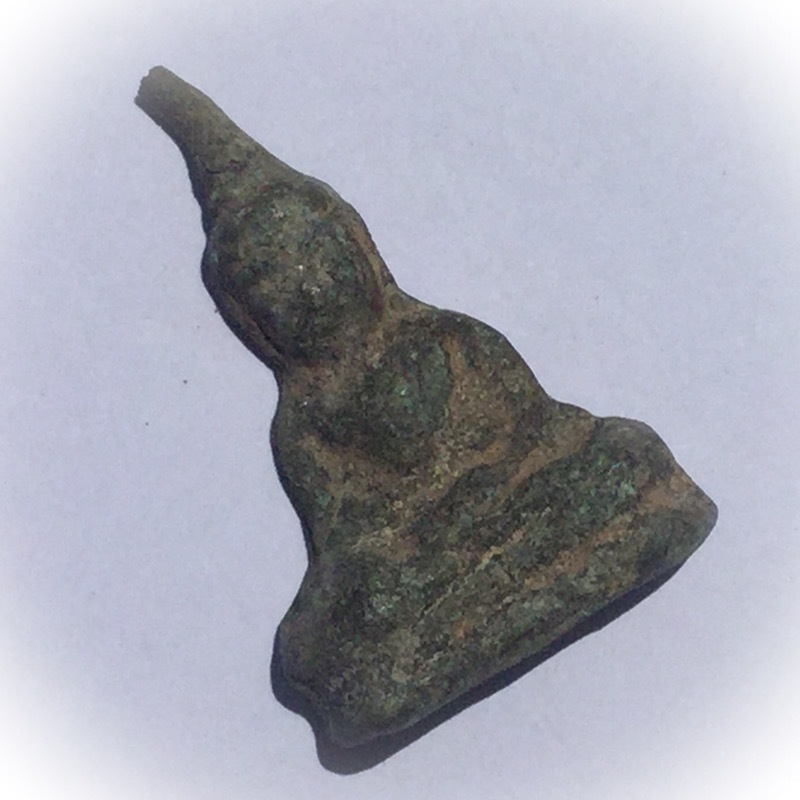 A classic edition that was hailed in the National press and became a well known edition throughout the Nation, and beyond to other shores. This memorial commemorative edition is a perfect replica of the Centuries old Pra Ta Gradan Kru Sri Sawad Amulet of Trai Pakee fame, and was smelted using various pieces of the original Pra Ta Gradan Kru Sri Sawad, as part of the Sacred Chanuan Muan Sarn ingredients. 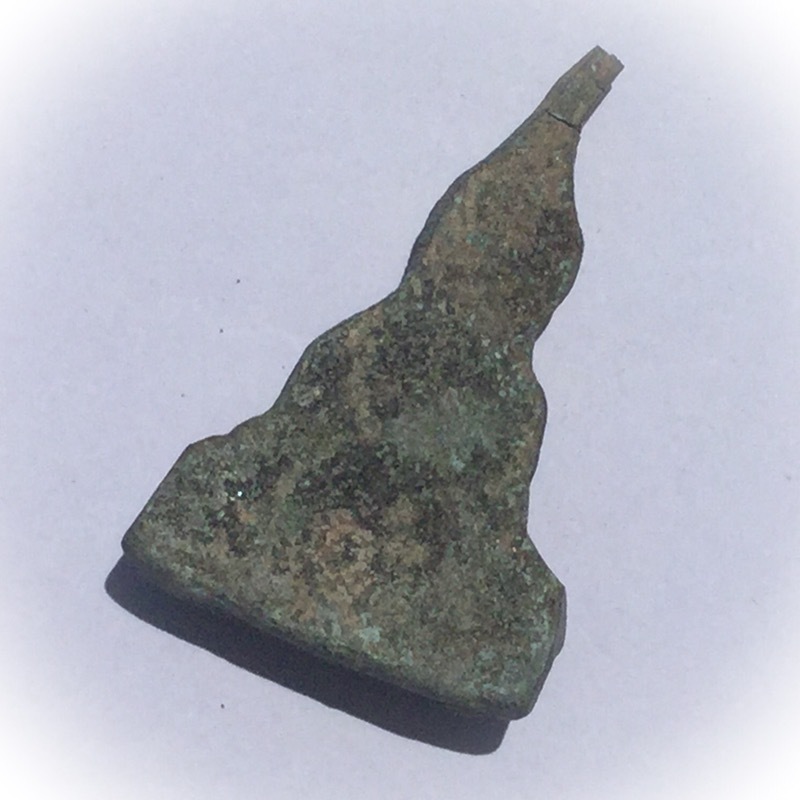 The Pra Ta Gradan is a Pra Kru hiding place archeological dig amulet from Wat Klang, Wat Nuea and Wat Tai temples of the Kanjanaburi Region. Made from Nuea Chin (leaden alloys). It is assumed to have been created in the U-Tong Era, and not thought to have been created by Buddhist Monks, rather is believed to be created by the Ruesi (Lersi). 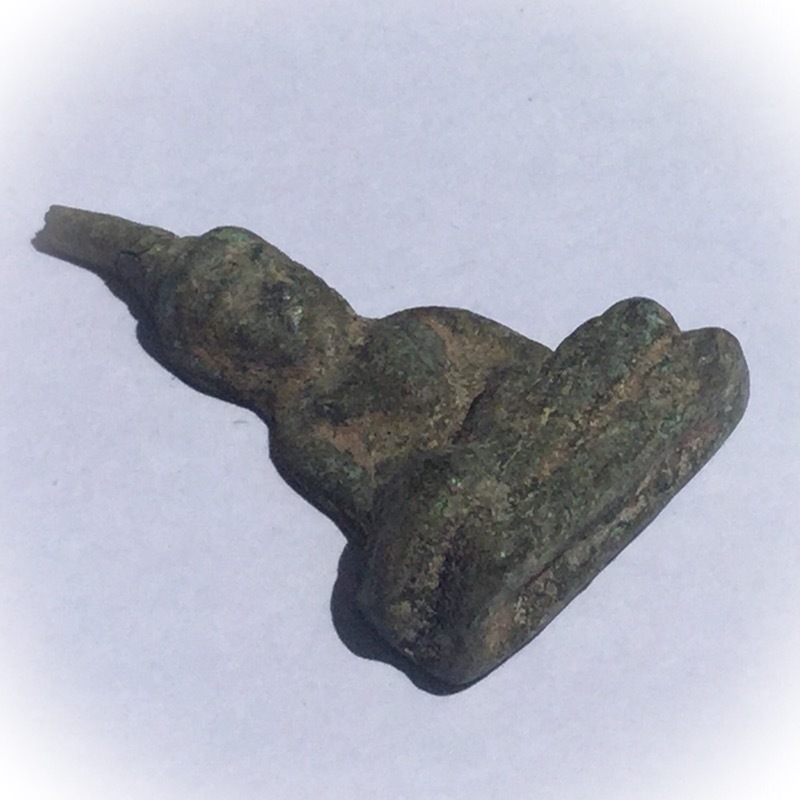 This belief arose, because of 2 gold and silver bound Bai Lan parchment scriptures, from Kampaeng Paetch and Supannburi Provinces, which tell of these amulets being created by the 11 Ruesi Sages. Of these 3 Sages, three of them were renowned for their great power and wisdom; Ruesi Ta Fai, Ruesi Ta Wua and Ruesi Pilaalai 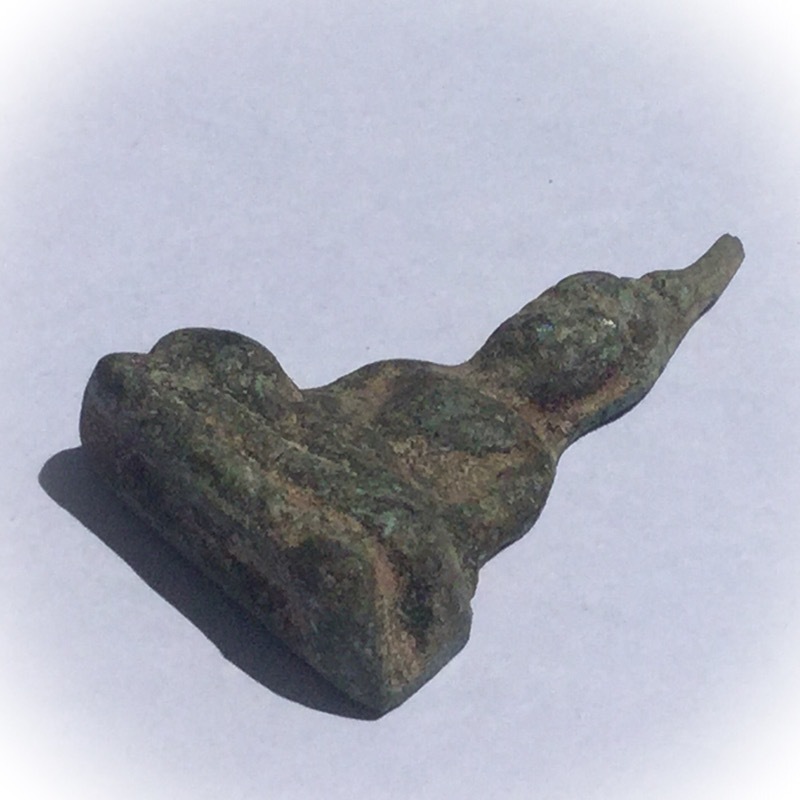 The Pra Kru Ta Gradan Sri Sawad amulet was discovered when the Kru hiding place broke open at the enpty dilapidated temple in Sri Sawad district in the year 2460 BE. The first amulet was found at Wat Klang, then more turned up at Wat Nuea, and at Wat Tai.

The Pra Kru Ta Gradan is honed in the image of a Lersi hermit sitting in Meditation, with a bound topknot. found in two different 'Pim' (models); Pim Gaes Yaw (long topknot), and Pim Gaes Dtum (short stumpy topknot). Both models have a flat rear face. On the 'Pim Gaes Yaw' longer haired model, the topknot of the bound hair of the hermit will bend to one side in one direction or the other. On the Pim Gaes Dtum, there is only a small stump pointing upwards. 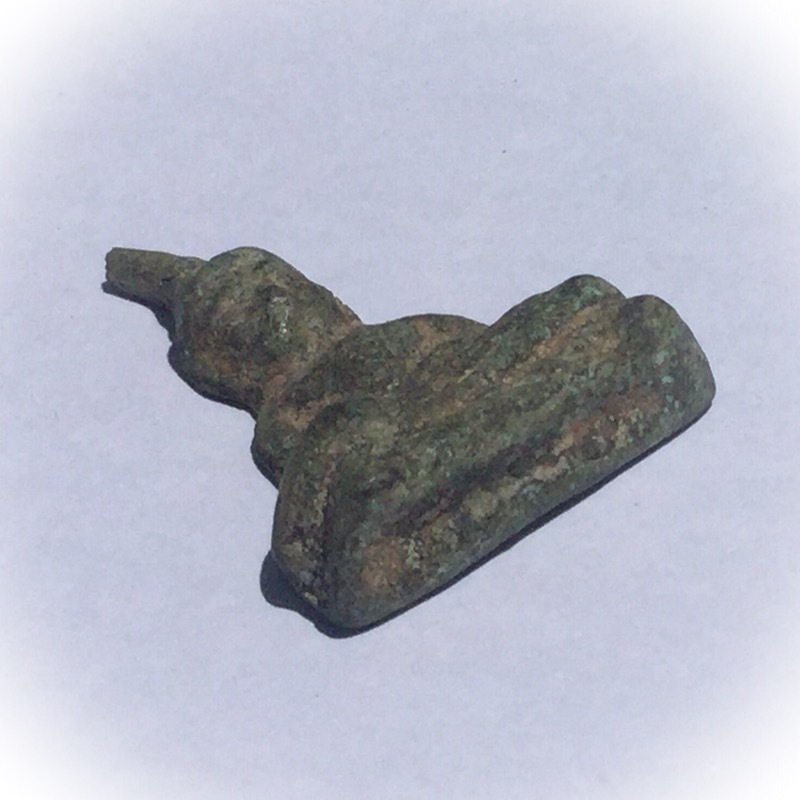 The Pra Kru Tha Gradan is one of the 'Trai Pakee' set of 'Top Three Regions' amulets made from Leaden Alchemical alloy, which are the Pra Ruang Rang Phern, the Pra Hoo Yan, and the Pra Kru Ta Gradan. The Pra Ta Gradan Kru Sri Sawad was said to have been only one of a large number of different amulets found in the hiding chamber by those olden days folk who were alive to witness the opening of the hiding place. There were also some Pra Mahaesuan, Pra Ruang Yern, Pra Paruhnang, Pra Pim U-Tong, and the Pra Yord Tong. 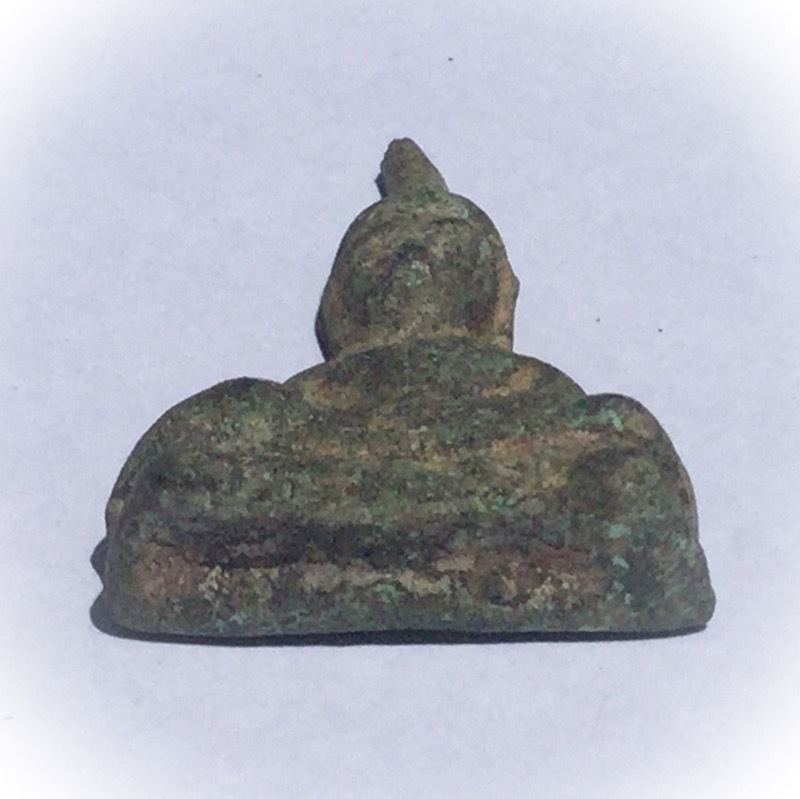 It is believed that it was Ruesi Ta Fai who made the Pra Ta Gradan amulet which he invited the Lord and Ruler of Ta Gradan City. Once they had made the amulets, they were buried in Gru hiding place chambers in various important sacred places around Kanjanaburi, Ta Gradan and Sri Sawat areas.It is also called Pra Gaes Pid Ta Daeng (meaning ' with topknot and closed red eyes - as in 'Ngang Ta Daeng'), meaning 'red eyes', for the red rust on the leaden surface which gives a reddish glint to the amulets face.

The Pra Ta Gradan was made with a number of variations of topknot, both short (Gaes Dtum), and long (Gaes Yaw). The 'Gaes Yaw' long topknots, are found to have both straight topknots pointing up, and are called 'Gaes Dtrong', and the slanted ones that lean to one side or the other which are called 'Gaes Kot'. This model is a 'Gaes Kot', because it leans to one side.

The Ta Gradan amulet is one of the Ancient members of the Traipakee family of amulets, and a powerful wielder of Kong Grapan, Maha Amnaj, Maha Ud, and Klaew Klaad magic for invincibility and safety, evasion of dangers and obstacles. 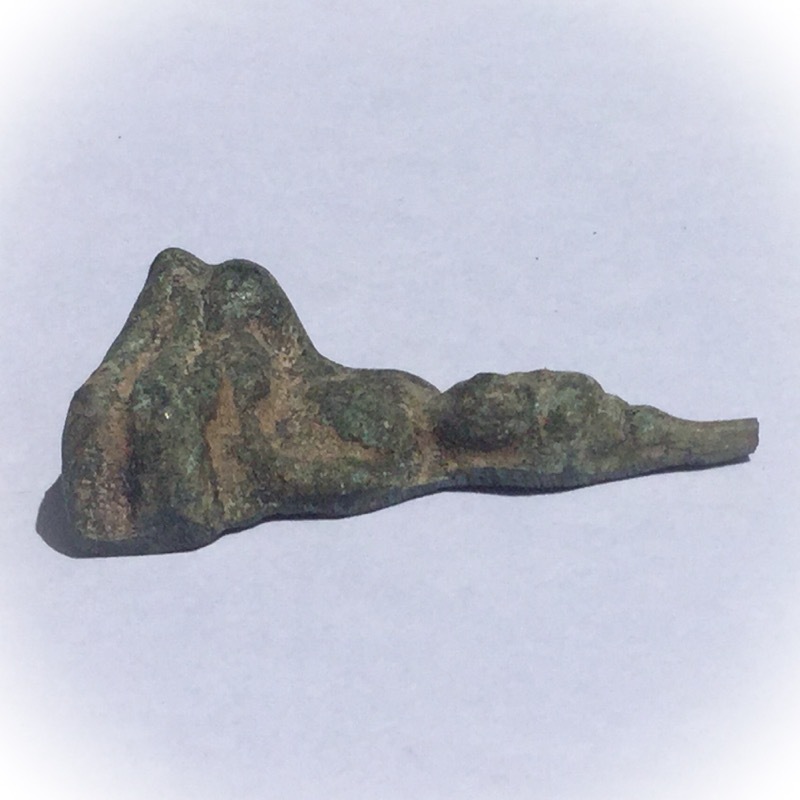 The file marks on the edge of the amulet where the images were hand filed off the 'Chor' tree which they were cast on. This was not an edition made using modern casting machinery, as is the case with all 'Yorn Yuk' amulets, where the creation method adheres to the original ancient methods, to produce perfect replication of olden days methods, and exactly identical results in the finished work.

This Pim is not only an Extremely sacred Consecrated Votive Tablet that deserves and requires Great reverence, it is also an excellent and low priced amulet, perfect for students to begin studying the way in which true Ancient cast Leaden amulets are made, and what the tell-tale signs are.

A Yorn Yuk Nostalgia Piece of an Ancient Masterpiece of Historical Sacred Art, in addition to being a truly Powerful Authentic Amulet of Importance in its own right, for its highly documented status and Sacred Chanuan Muan Sarn, along with a very large Buddha Abhiseka Ceremony with a large number of Great Guru Masters present. 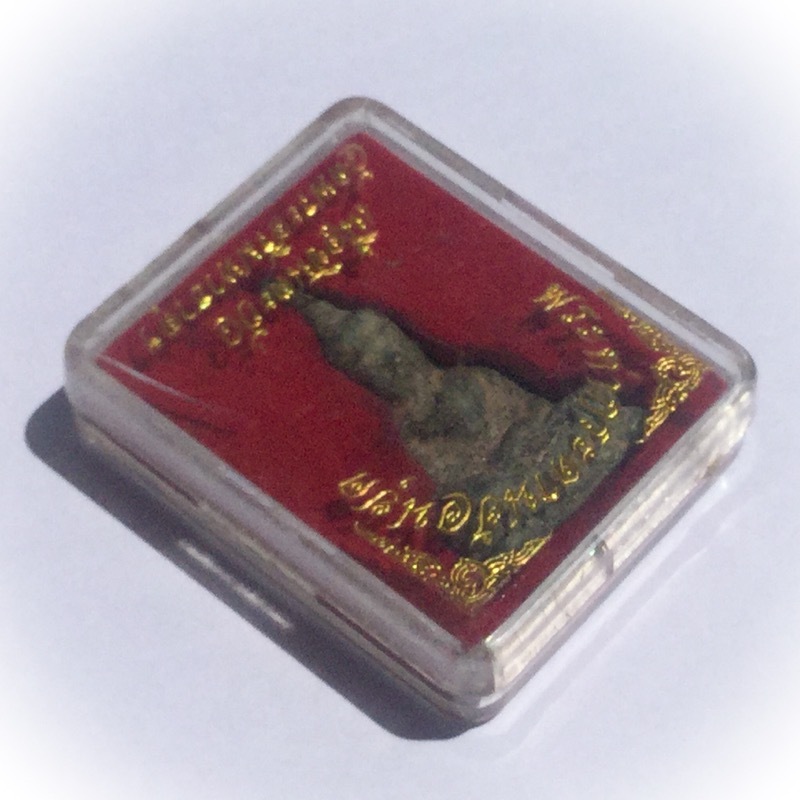 This amulet is still in the original box from the temple.

Really Ancient 'Kraap Kru' (residue stains) of 'Pra Nuea Chin Dtakua (leaden amulets), appears through the process of the residues rising up from within the amulet, and breaking through the surface. The thicker the residue (Kraap Kru), the more likely the amulet is much older. Thin layers of Kraap Kru Khai Khaw (white froth residue) as opposed to thick layers, mean less aged. Areas of reddish rusty residue are visible called 'Sanim Daeng', meaning 'red rust'. This reddish stain is in some areas to be perceived as having a maroon/brownish tint to it. 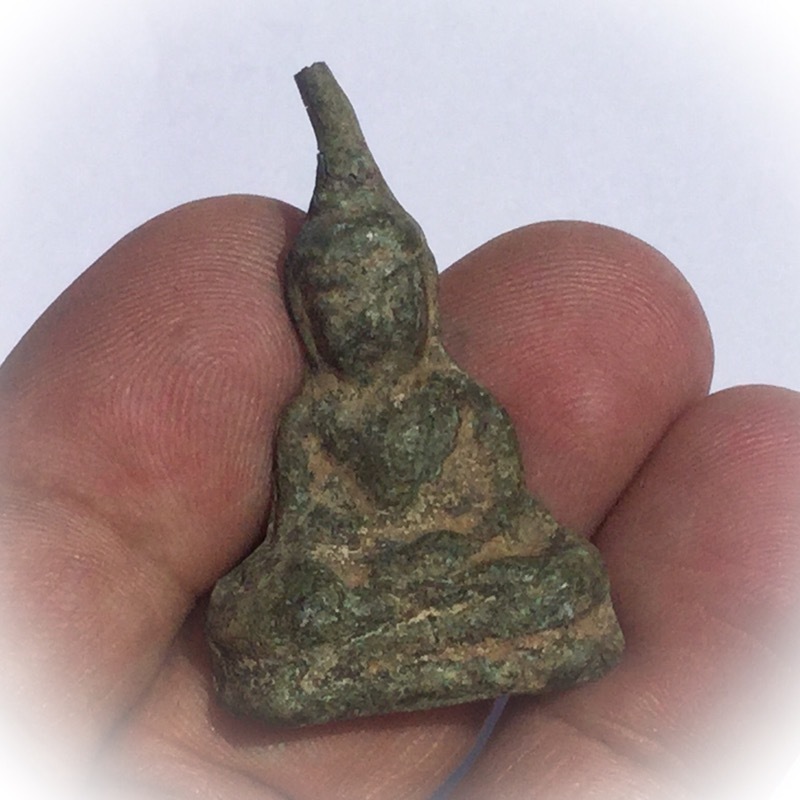 The Pra Kru Ta Gradan is one of the red rust category of 'Pra Nuea Chin' (leaden amulets), and is through this classification and its Trai Pakee status, worthy of the title 'Pra Yord Niyom Nuea Chin Sanim Daeng' (Buddha Amulet of the Highest Preferred Class of the red rust leaden amulet category).

There are various categories of 'Pra Nuea Chin' (leaden amulets), including 'Khai Khaw' (white froth), 'Sanim Daeng' (red rust) and 'Sanim Khiaw' (green rust). One of the recognition factors which elevate the Pra Ta Gradan Nuea Chin Dtakua Sanim Daeng from the first hiding place find at Wat Klang, is the fact that those amulets were placed into their burial place with gold leaf pasting, which then flaked into dust and mixed itself into the Khai Khaw froth of the Kraap residue which rose up through the interior of the amulets to form a covering over the amulets. In the finest and most highly prized models, this gold dust is visible within the white froth lending a brown sugar kind of look to the surface residue, with a golden brown yellowy color, interspersed by the snowy white fine powdery Khai Khaw residue. 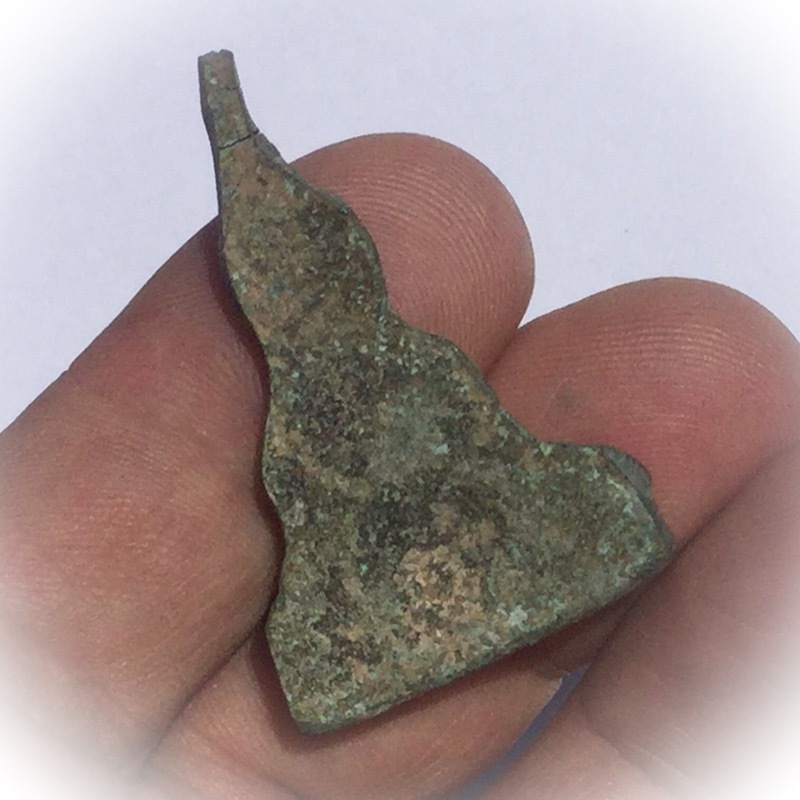 This amulet is therefore a Classic Ancient Amulet, of Authenticity and High Esteem, with true Kong Grapan Chadtri Klaew Klaad Maha Ud Maha Amnaj Powers, and is an extremely affordable alternative to the Pra Kru Ta Gradan from the Wat Klang, Wat Nuea, and Wat Tai Finds. Its Sacredness and Mark of Authenticity is confirmed through the National News Coverage which this edition received, and the Importance of the Sacred Chanuan ingredients, and the Guru masters who blessed them, as well as the Importance and relevance of the temple of Wat Pra Sri Mahatat. A Classic Amulet, at a Classic Price. 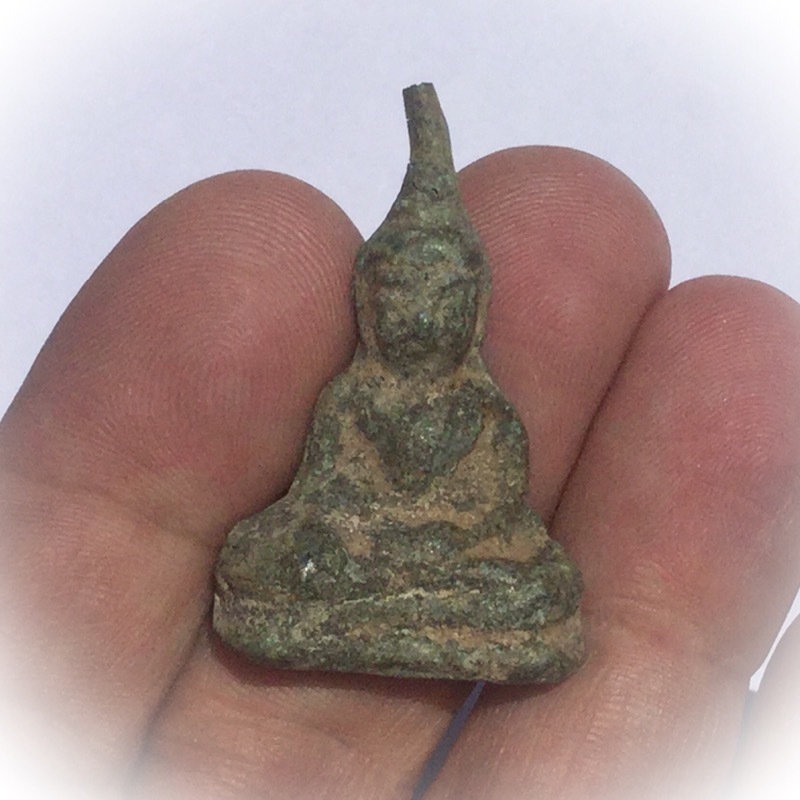 Leaden amulets are amongst the rarest amulets to find, and are mostly highly priced. This sacred Leaden Amulet is of a much Higher sacred Value than its price tag reveals, and is a most recommendable choice for those Devotees who seek an Ancient Sacred Amulet of High Buddhakhun power, for protection, increased status, and auspicious blessings. 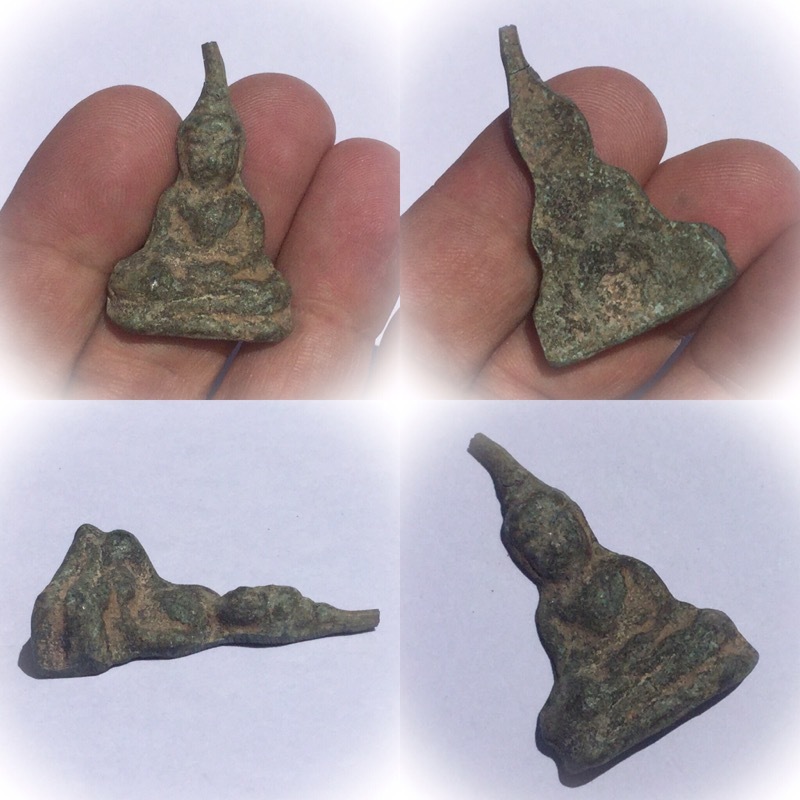