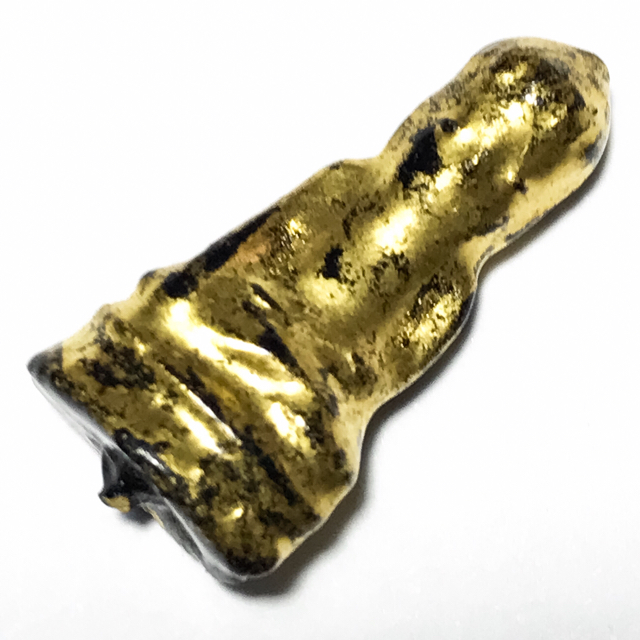 Pra Upakut (Bua Khem) Arahant (Western Name; 'Upagupta') - Nuea Pong Long Rak Pid Tong - Sacred Powders with black herbal Laquer and Gold coating, and Sacred wood inserted in the base, from the Kru Wat Chana Songkram Archeological Find of 2495 BE at the temple of Wat Chana Songkram in Banglamphu. This exhibit is a Pim Lek, measuring 2 Cm high x 1 Xm wide base, which is slightly smaller than the Pim Yai which measures 2.5 x 1 Cm. Men favour both models, but this smaller model is the most highly favoured by ladies, for its petiteness. Both large and small models are equally valued and equally rare.

The Kru Wat Chana Songkram find was discovered in 2495-2496 period; Tan Jao Khun Pra Tamma Pidok (Luang Por Niyom) gave the order to build a school for the local needy folk within the temple enclave of Wat Chana Songkram. He donated some land from the temple for the Ministry of Education to build the school. In order to make the area clear for the construction, it was necessary to remove the old Chedi Relic Stupa which was obstructing the vicinity where the construction was to take place. 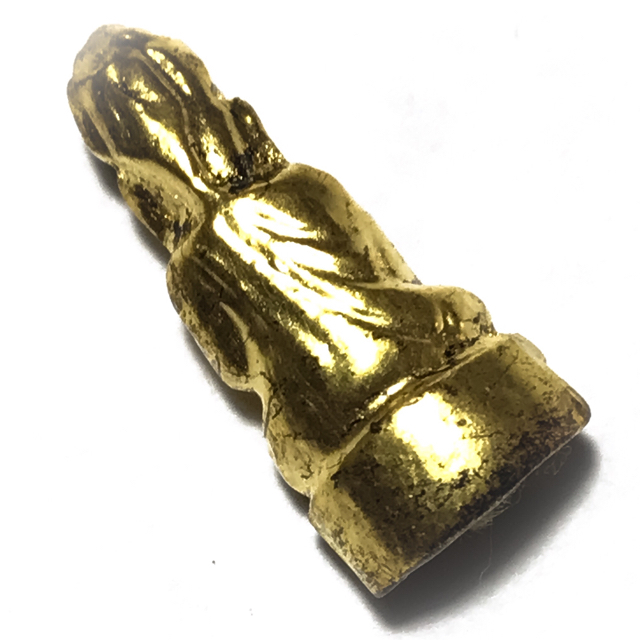 As the Chedi Stupa was disassembled, Luang Por Niyom (abbot of Wat Chana Songkram) instructed Tan Jao Khun Pra Wimon Gijjaraks (Luang Por Siri Adtramo), who was in charge of shrine preservation, to go into the Chedi to investigate within, to see if there were any hidden relics. Luang Por Siri reported to have found amulets made from Sacred Earthen powders, in small quantities, mostly broken, and that the larger number of unbroken amulets had already been plundered at a previous date by robbers.However, behind this Chedi Stupa, was another old Chedi, which was a larger one. They drilled through neck of the Stupa, and found a batch of the same kind of amulets which had been found in the first Chedi Stupa. 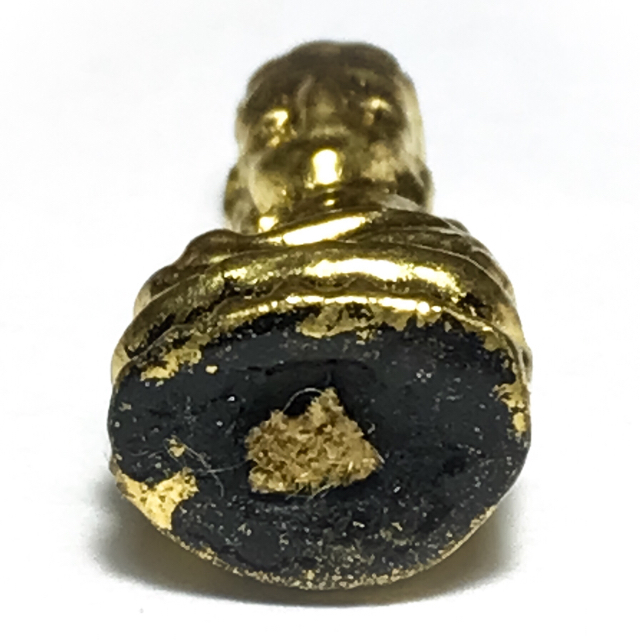 The Samanera Novice Monks were called to enter and gather all the amulets from within the Stupa, and bring them out to be counted. Apart from all the various models of amulets which were brought out, a Sacred Bailan Parchment Scripture was also found, with Khom Sanskrit Agkhara Inscriptions on it. A carved wooden Buddha statue painted with lacquer and gold leaf, and some Pra Kru Wat Takrai Hnaa Krut amulets (Earthen Ayuttaya Era hiding place amulets of immense fame), were also found within the Kru Chamber of the Stupa. There were also some Pra Kone Samor Ayuttaya Era clay Buddha images, some and some Pra Chai. 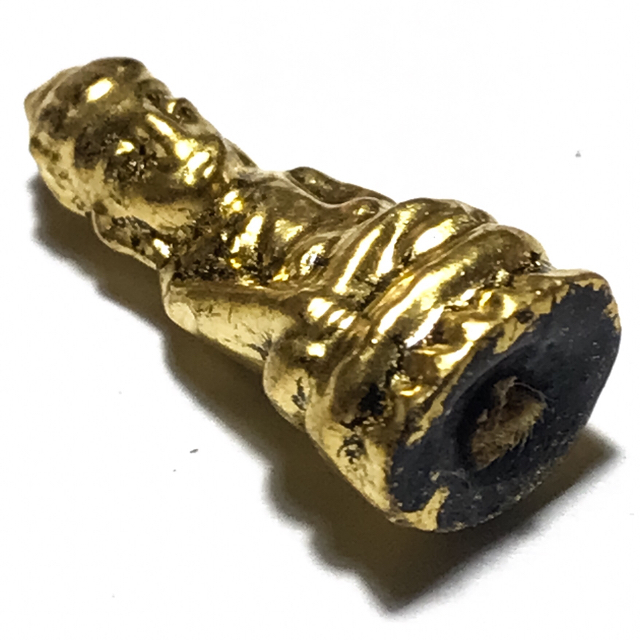 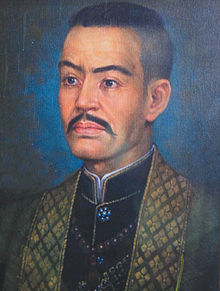 The Ministry of Buddhist Arts came to investigate and authenticate the artifacts, and concluded after perusal, that all of the amulets were placed within the Kru during the time of the Reign of His Majesty Rama 1 of the Chakri Dynasty, and that they had been ordered to be hidden there by the Grom Pra Rachawang Boworn Maha Surasihanat (A Royal Family Member ) to preserve Buddhism by leaving hidden amulets to be found in future times. They were ordered to be hidden in Kru Chamber, along with the construction of Wat Chana Songkram.

This was on the grounds of the previously standing Wat Klang Na, as a way of makiing merits for Buddhism, to reduce his bad Karma from the decades of warmongering with the enemy nations. Grom Pra Rachawang Boworn Maha Surasihanat (2287 BE - 2346 BE) spent many years fighting to protect Siam against the enemy invaders, and fought on land with the army, as well as on boats with the navy, and was involved in much Killing. And so the temple of Wat Chana Songkram was built up, and the Chedi Stupas were filled with amulets, to make merits to atone for the deeds of war. The temple is called 'Wat Chana Songkram' meaning 'Victory of the War' which celebrated the many victories he had fought in. 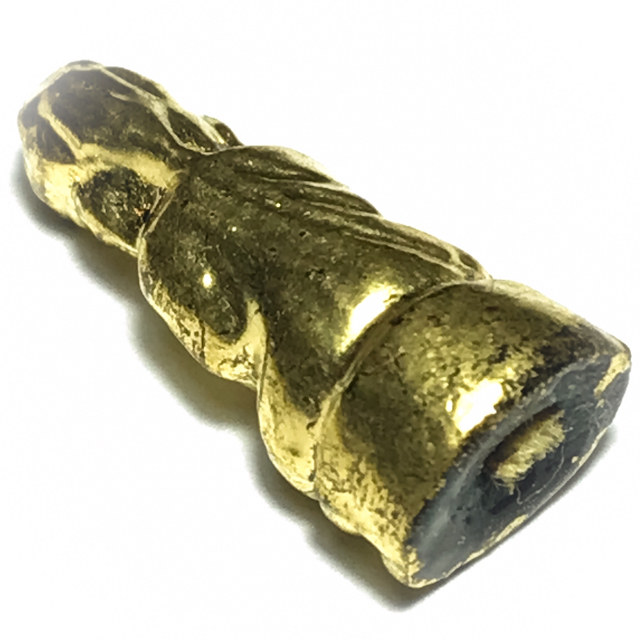 Once the amulets had been all gathered and safely counted, they were separated into their respective types. It is said that the ost beautiful of all were the Pra Pid Ta and the Pim Samati Khad Paetch meditating Buddha, but that a large number of other very beautiful amulets were also found, including this beautiful Pim Pra Upakut Bua Khem. 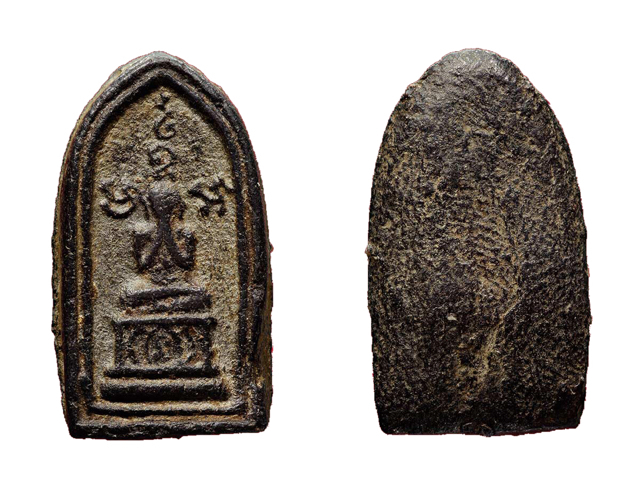 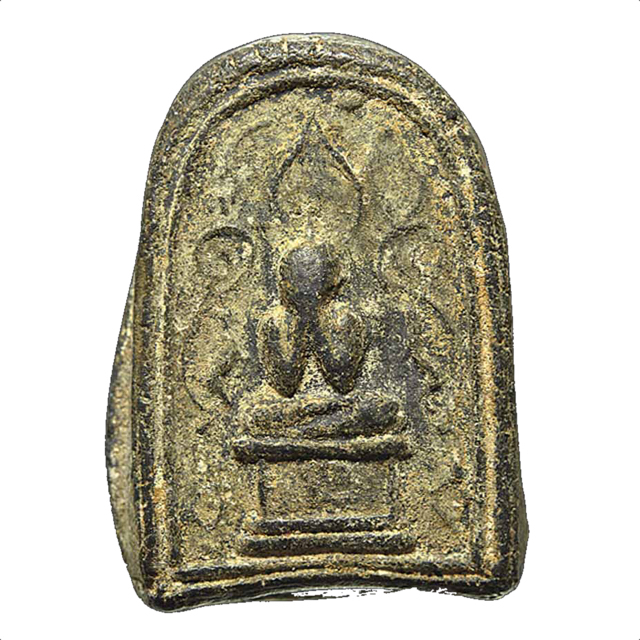 Below, some of the Pra Kru Wat Takrai Pim Hnaa Krut ancient amulets, some of which were found within the Chedi of the Kru Wat Chana Songkram in the same find.

Pra Upakut was an important Arahant Monk of the time of the reign of King Asoka in India. Pra Upakut (also known as Bua Khem in Thai, meaning pointed lotus flower, which refers to the pointed lotus on his head) Pra Upakut is highly revered by Indian Buddhists, as well as the Mon, Tai Yuan, Lanna and Isan people in Thailand. 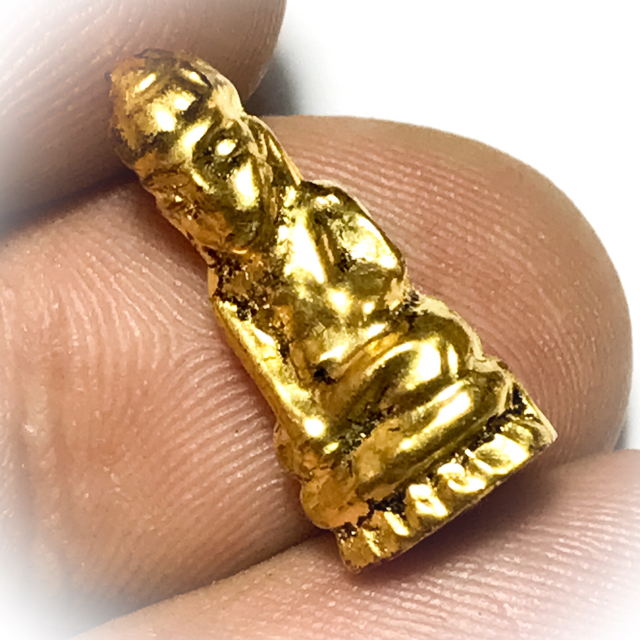 Once in olden days, the Mon Hilltribe People presentid his Majesty King Bhumipol Adulyadej with a sacred Upakut Buddha statue, as his Majesty was ordained as a Monk, and the Pra Upakut was also mentioned by Hius Majesty King Rama 5 in his novel "Pra Racha Piti 12 Duean' (meaning '12 Months of Royal Ceremonies'). 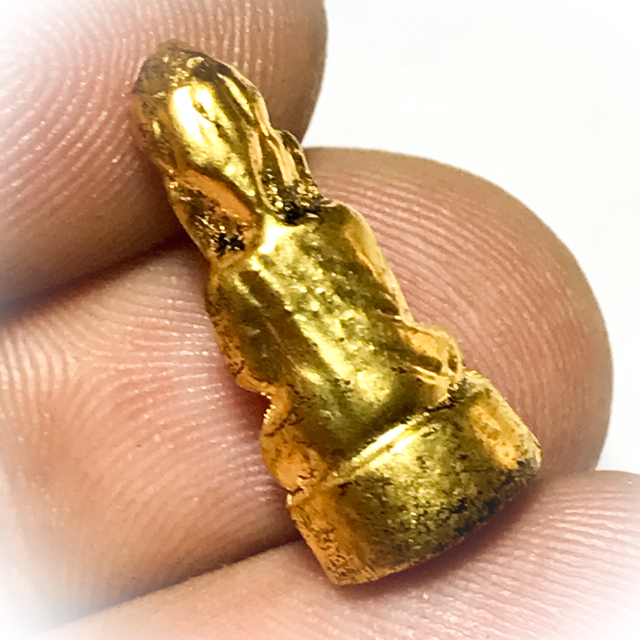 Pra Upakut , otherwise known as Pra Bua Khem, was an Arahant who the Buddha praised for his great magical powers, and who was said by the Lord Buddha to be the most powerful of all the Arahants. Before the Buddha entered Nirvana, he asked Pra Upakut to remain alive until the coming of Pra Arya Sri Maedtrai (Maitreya), and protect the Buddha Sasana and the teachings of the Dhamma. It is believed by Thai Buddhists, that he is still alive to this day, and resides in the middle of the Great Ocean, with a Lotus leaf on his head, and remain alive throughout the Aeons to rise to the assistance of the Dhamma whenever needed, and to help Sentient Beings. 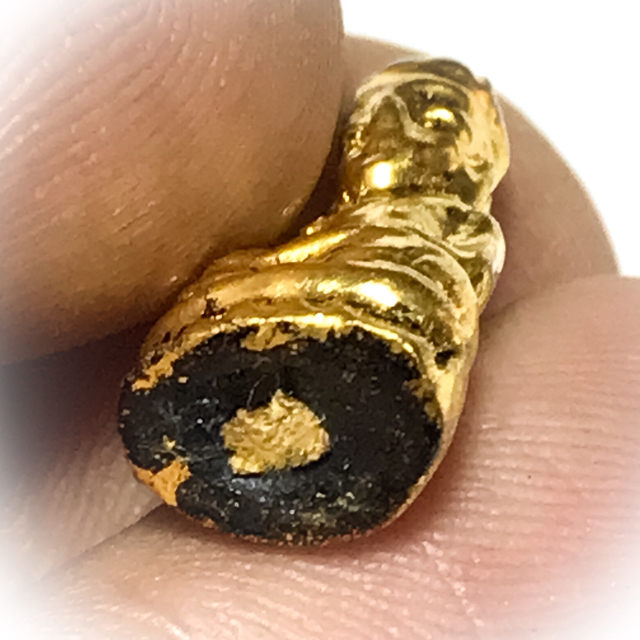 Khem means needle. It is interesting to note, that the Ancient Burmese Upakut Buddha statues have a ritual insertion of nine needles within various points of the statue for method of empowerment. Pra Upakut was a Monk in the times of Maharaja Asoka the Indian king who first promoted Buddhism. In this time Buddhism was experiencing a lot of disarray and downfall because a lot of false people were entering Monkhood just to make money or eat free. 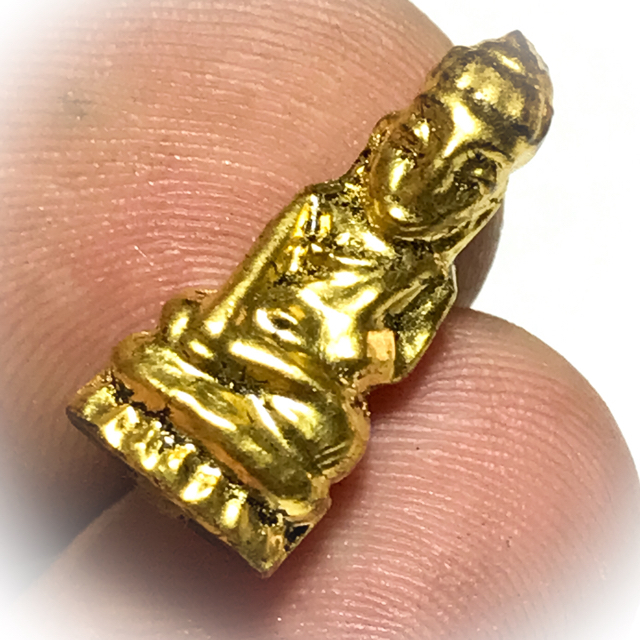 As a result the local people did not have much faith and were losing their faith in Buddhism. King Asoka (we call Asoke in Thai) was then calling upon the monks to do something – they had a comitteee meeting and it came about that some monks knew of a monk called Pra Upakut who was sat in the “belly button of the Ocean” (Sader Tale), meditating and entering Nirodha and Samabhati state of meditation (enlightened and free from suffering).It wold have been so difficult to find a monk whose practise and purity was higher than this one – so they decided to elect him to be the leader of the Sangha in order to save Buddhism 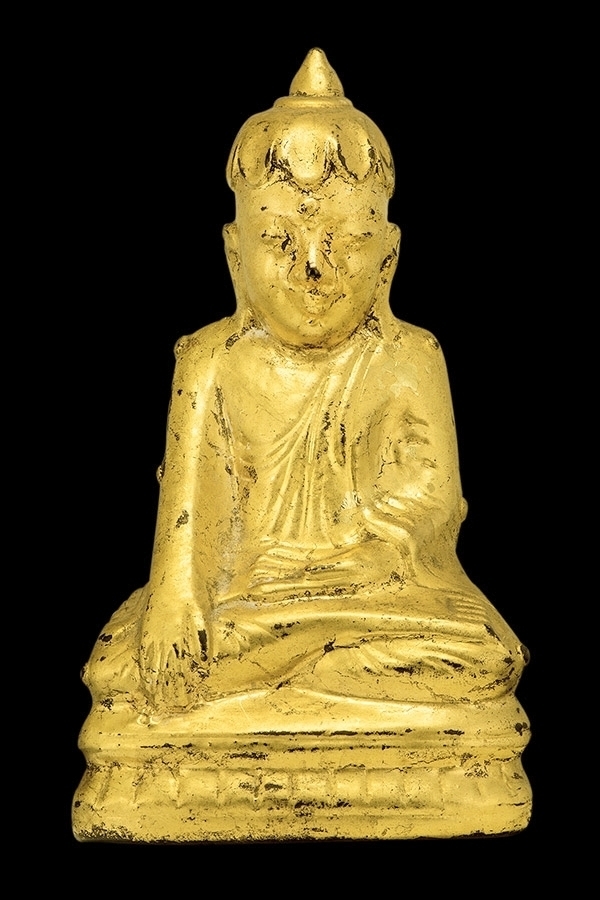 The statue in the above pic is a Burmese style one and is called one of two names 1. Pra Upakut, or Pra Bua Khem – if made out of Bodhi tree wood is also called Pra Takhinasakhaa and made from a branch of Bodhi tree that has died naturally and faces south (or in some legends, East). 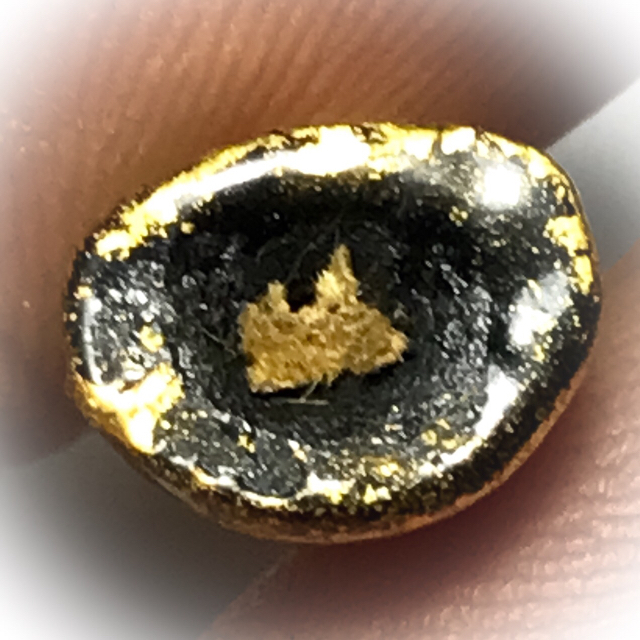 Pra Upakut is severely revered also in Chiang Mai province and most amulets and statues of him will be made there. This is probably the Burmese influence too because in past times Burma was always overlapping into the province and even to this day you can see that the monks in North Thailand wear red robes like in Burma not yellow like in the rest of Thailand.

The reason he is called Bua Khem, is because khem (needles ) was used to refer to the buddha arahant relics used to implant in original large statues of him, where 9 needles or relics were inserted into his forehead (1) shoulders (2) hips (2) Hands (2) and Knees (2)

The General meaning of the Pra Upakut Amulet has two perspectives; 1. Symbolizes the Powerful Arahant who is able to subdue Maras and Demons and protects from danger and evils

2. Symbolizes Pra Bua Khem who resides below the ocean in a crystal palace in peace and happiness, who used to me a wealthy perfume seller before his enlightenment, and is able to endow devotees with amazing luck and riches, as well as watching over the world and protecting Buddhism until the coming of Pra Arya Sri Maedtrai (Maitreya) 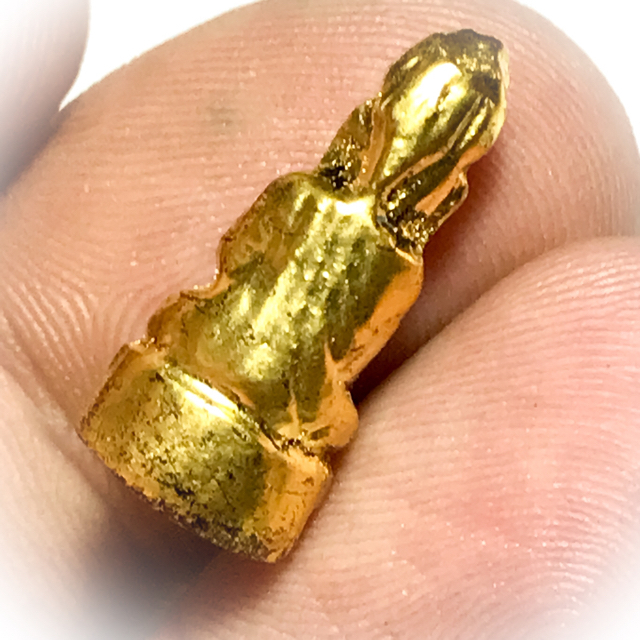 Light fragrant incense , offer fragrant flowers and perfumed water – this can be done with statue at home or statue in the place of business too for sales. You then say namo tassa pakawato arahato sammaa samputtassa 3 times and pray in your heart that wherever the fragrance will flow in the air and touch, that there will be;

2. (in place of business) That the fragrance wherever it touches will cause he who smells it to be induced to purchase in your shop. (actually i believe this is a really typical asian and especially Thai thing invented by people with greed in their hearts not by monks who recommend the way of worship – decide for yourself. i dont believe in using Buddhas to ask for riches) 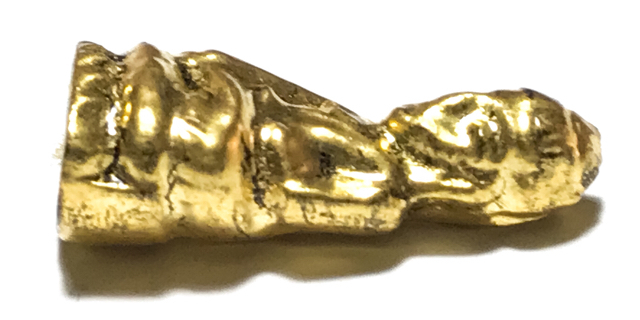 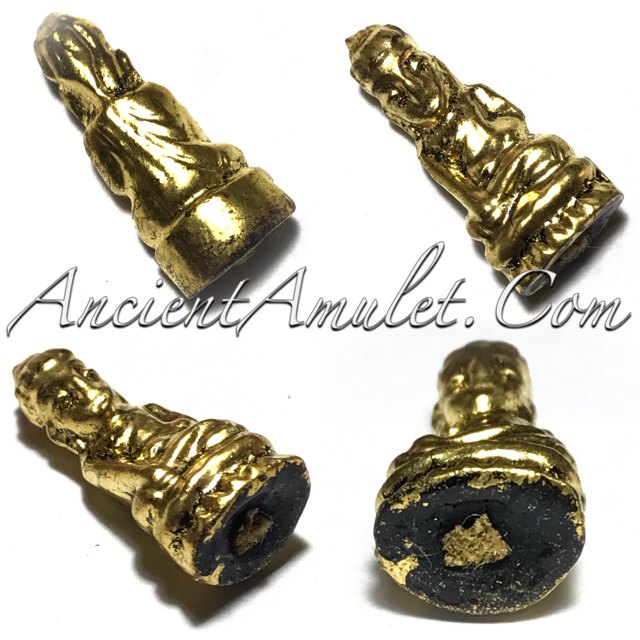