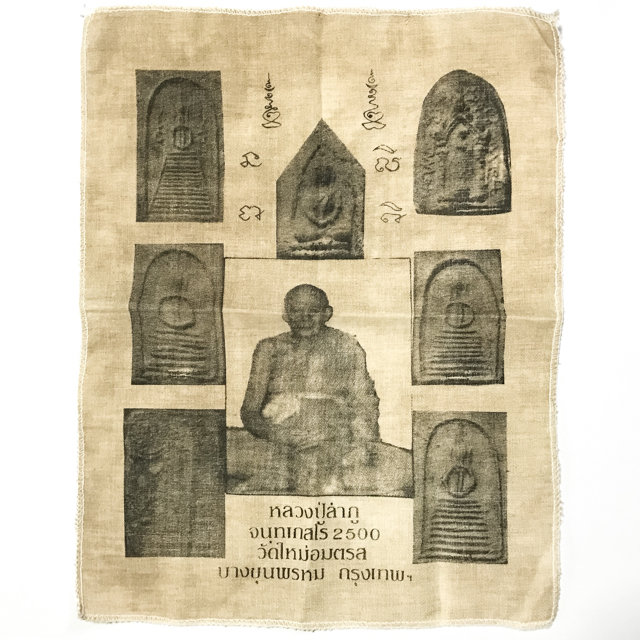 Sacred Yantra Cloth with Pantheon of amulets, and the image of the Great Luang Phu Poo Kangkabanyo, of Mai Amataros (Wat Bang Khun Prohm), from the year of the great 25 Centuries of Bีddhism Celebrations which were held around Thailand, being one of the most important years in the history of Thai Buddhism, for its Religious Significance, as well as for the many editions of Sacred Amulets Blessed and Released during this year.

The Pha Yant measures 11 x 8.5 Inches, and is portable if folded in the pocket, or can be framed on the wall, or to stand on your altar for Bucha. 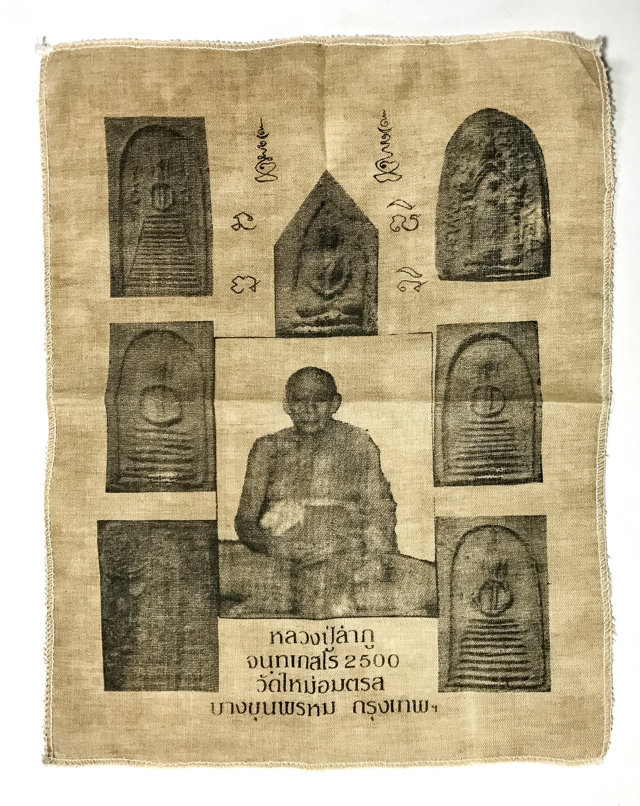 The Pha Yant features the image of Luang Phu Lampoo, seated with his most famous amulets of the time around him, with some Khom Agkhara Inscriptions of the Kata Pra Sivali (Na Chā Lī Dti), and two Sacred Yant Dto, with Unalome. A very rare exhibit that is highly recommendable for those devotees who revere Luang Phu Poo and is amulets, to accompany and enhance the power of the amulets you wear from this master. 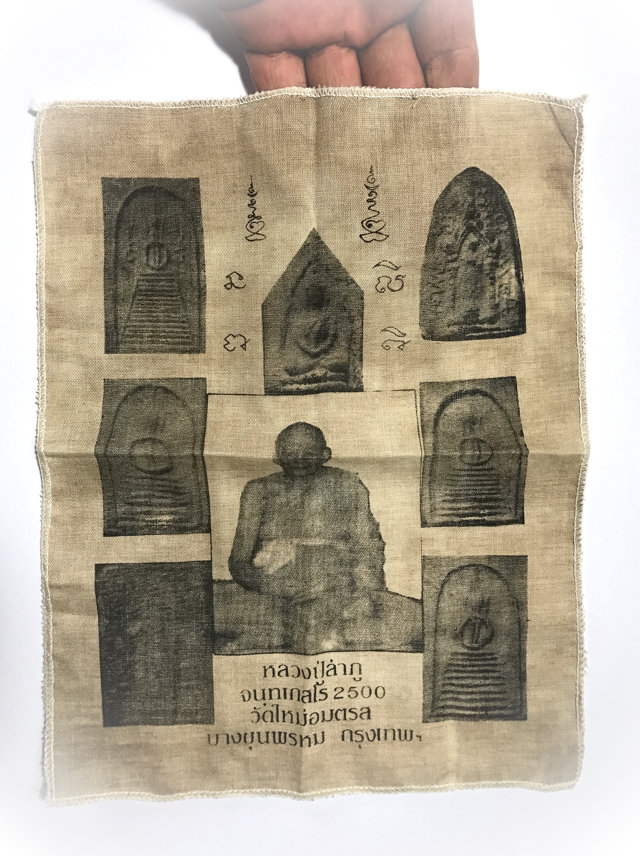 They are considered to be the perfect alternative for the extremely rare and difficult to afford Pra Somdej Wat Bang Khun Prohm of the Gru Chedi Yai from Somdej Pra Puttajarn (Dto) Prohmrangsri of Wat Rakang Kositaram. 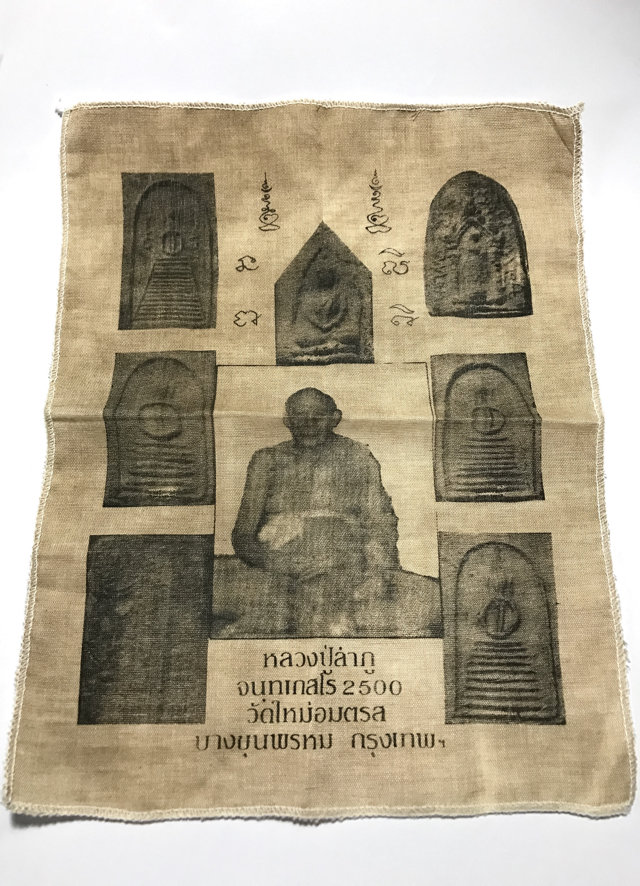 Luang Phu Lampoo made his famous editions of amulets using using broken pieces of the Pra Somdej of Somdej Pra Puttajarn (Dto) Prohmrangsri/ He used amulets which were removed from the Chedi Yai (large Chedi Stupa at Wat Mai Amataros (Wat Bang Khun Prohm), during the grand 2500 BE Opening of the Kru, to grind down into Muan Sarn Sacred Powders. When the Kru was opened in 2500 BE, he took a large number of Somdej Dto's amulets, which were found to be broken and not distributed during the opening of the Kru, and used these sacred Votive Tablets to grind down into Muan Sarn Sacred Powders.

He used these powders to repress them into the Pra Somdej Pim Wat Bang Khun Prohm, and replaced them back into the Chedi Stupa for a time. He then removed each edition again from the Chedi Stupa Kru Chamber, and began to hand them out in each of the various years of his various editions. Luang Phu is known to have personally the number 9 on the rear face of some of the editions, which he would place some of in the Chedi, for later distribution. The last of his amulets were remove from the Kru in 2519 BE, mostly with the number 9 Inscription towards the end. 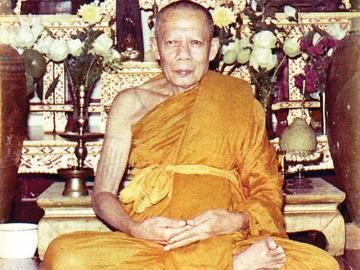 The Pha Yant is not only a Sacred Blessed Bucha item, but is also a powerful Sacred Artifact blessed in important ceremony during the Grand Blessing Ceremonies of the 25 centuries of Buddhism Celebrations. The Pha Yant is in addition a Testament to the Eminence of the amulets of Luang Phu Lampoo, and pays tribute to them. To perform Bucha to the Pha Yant, and wear his amulets simultaneously, can only serve to strengthen their Miraculous Power.

If we speak of the high end collector, devotee and aficionado who seeks the amulets of the famous Pra Somdej Wat Bang Khun Prohm Luang Phu Lampoo, all of which are extremely rare, we should also then know that the truly knowledgeable collector, who keeps his secrets well, turns to gaze at the Pra Somdej amulets of Pra Kroo Amara Kunajarn Luang Phu Lampoo Kangkapanyo, the ex Vice Abbot of Wat Mai Amataros (Bang Khun Prohm).

It is impossible to overlook the amulets of Luang Phu Lampoo as a true aficionado, for their eminence, great beauty, and highly sacred value. His amulets have become extremely rare in the present day, and have joined their predecessors to become essential rarities, that only the diligent amulet hunter and collector can find. 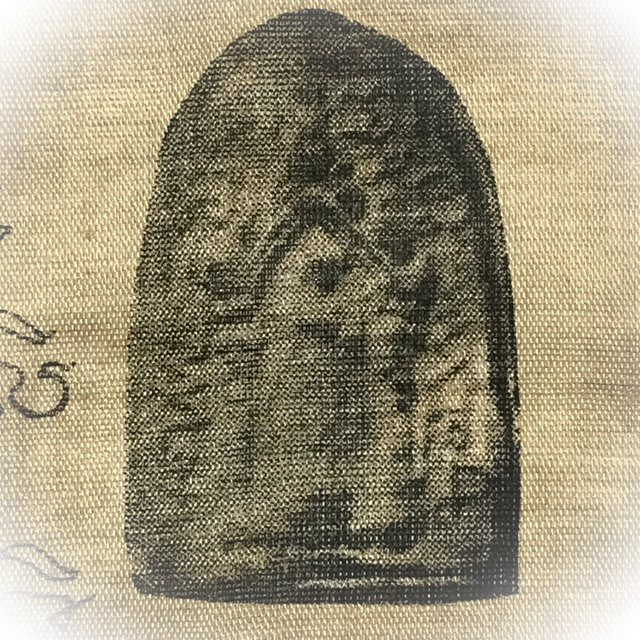 Luang Phu Lampoo was Vice Abbot of Wat Bang Khun Prohm temple, and was born in 2444 in Amphoe Ta Ruea, Nakorn Sri Ayuttaya. He was Ordained at Wat Gai Jan in Ayuttaya, in the Year 2465 BE on the 1st of May, which was a Monday (Moon day) of the 6th Lunar Phase of the 6th Lunar Month. 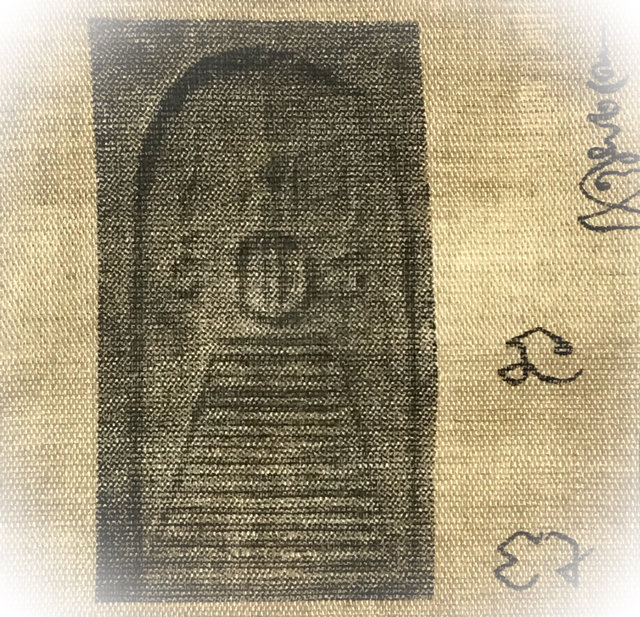 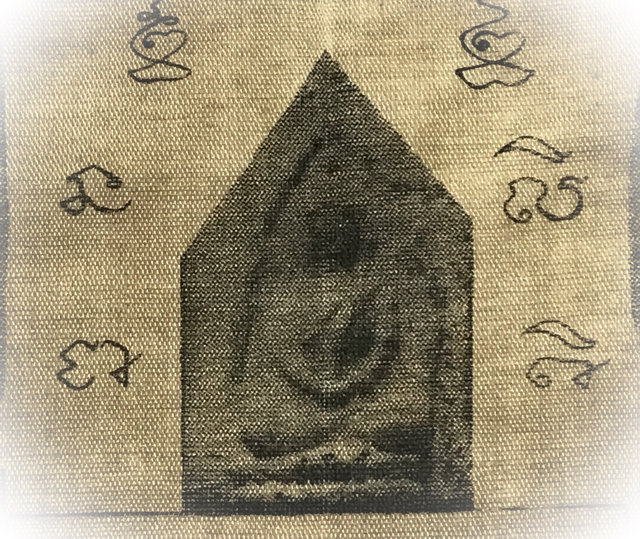 Then, in the year 2469 BE, Luang Phu Lampoo moved to practice further at Wat Chang Tong in Ayuttaya, where he spent 7 years practicing Kammathana Vipassana. During these years, he studied Khom Sanskrit Agkhara and Putakom Sorcery. In 2473 BE he reached his Batchelor's Degree which he passed at Wat Nong Khuean Kang in Sra Buri. 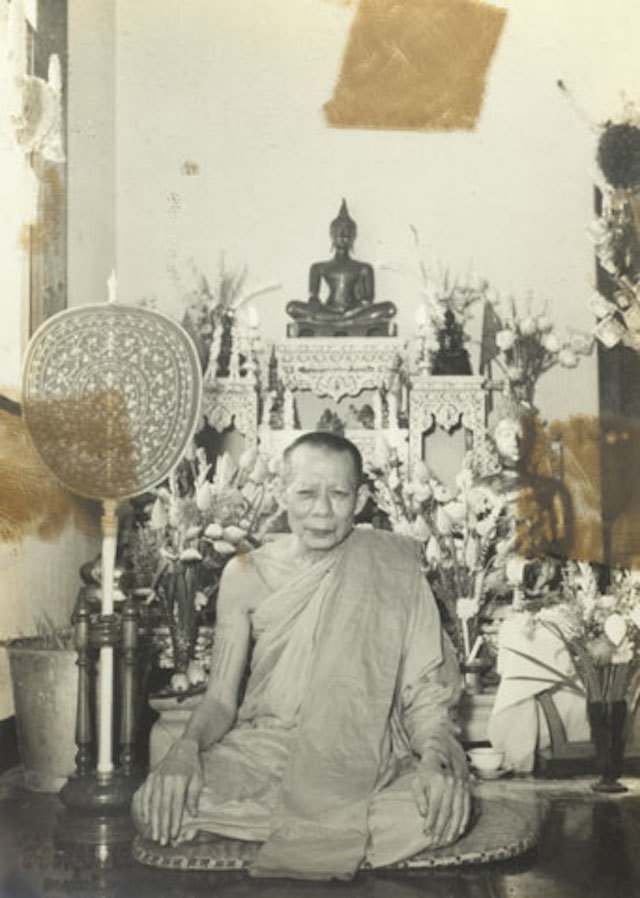 Then the year 2469 BE Luang Phu Lampoo moved to practice further at Wat Chang Tong in Ayuttaya, where he spent 7 years practicing Kammathana Vipassana. During these years, he studied Khom Sanskrit Agkhara and Putakom Sorcery. In 2473 BE he reached his Batchelor's Degree which he passed at Wat Nong Khuean Kang in Sra Buri.

Then, in the year 2477 BE Luang Phu moved from Wat Chang Tong to stay at Wat Bang Khun Prohm in Bangkok to continue his practices, and was elected to become Vice Abbot the first time in 2502 BE, which Luang Phu refused, saying they should choose a younger Monk. In the Year 2512 However, Luang Phu Lampoo was given the task of Vice Abbot, and accepted. 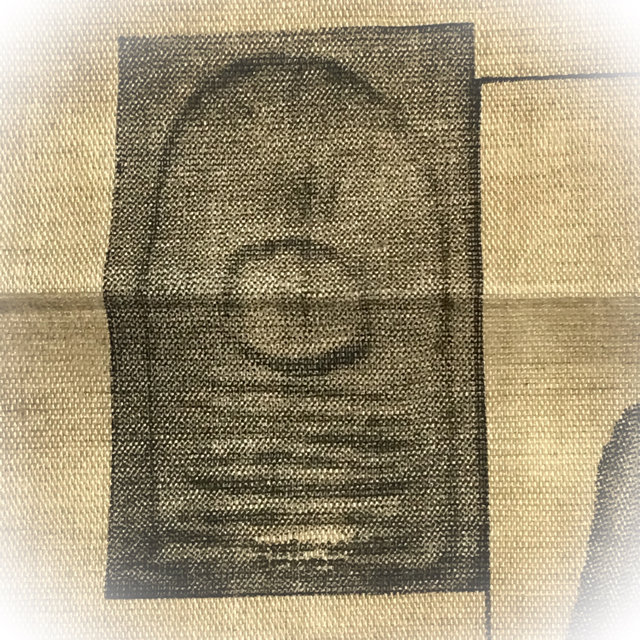 Luang Phu Lampoo was one of the members of the Gammagarn Comittee who performed the official opening of the Chedi Yai Gru Chamber in 2500 BE to remove the Pra Somdej Wat Bang Khun Prohm amulets of Somdej Pra Puttajarn (Dto) Prohmrangsri (Wat Rakang Kositaram). After most of the amulets were distributed, those which were broken and left over, were taken by Luang Phu Lampoo and kept in his Kuti hut.

As the unbroken amulets were all depleted, and the devotees found out that Luang Phu Lampoo had kept a large number of the broken ones at his Kuti, the devotees began to flock to him to ask for hims to give them a broken amulet. Luang Phu then decided to grind the broken amulets of Somdej Pra Puttajarn (Dto) Prohmrangsri into powders again, and repress them into newly formed Pra Somdej. He mixed the sacred amulets which were ground down with some other Muan Sarn Sacred Powders which were gathered from the most magical and sacred sources, temples and masters, and repressed the powders into amulets again within the Dtamra Pra Somdej of Somdej Pra Puttajarn (Dto) Prohmrangsri Wat Rakang Kositaram. There were both light colored amulets, and some were also mixed with black Pong Bailan powders (made from burning ancient Buddhist parchment magical grimoires into soot). 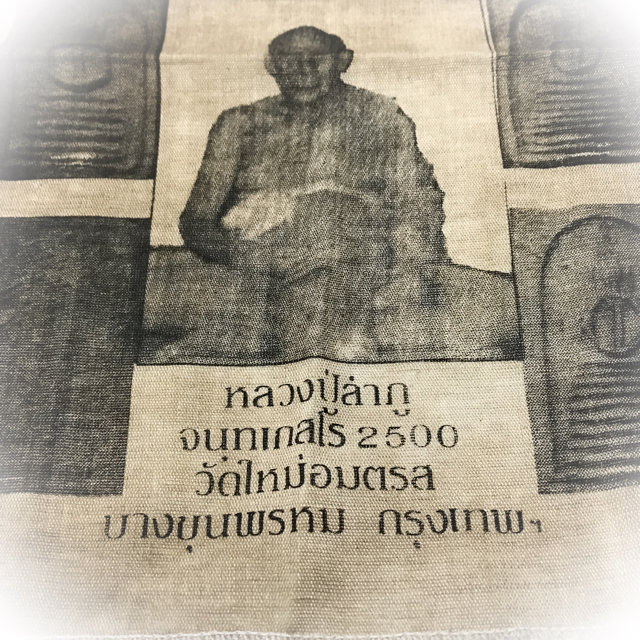 Luang Phu Lampoo created 2216 Amulets in all in the 2502 BE Edition. Of these, 11 different Pim (design models) in the famous 2502 BE release were created, which were;

As to the 11th Pim (Sayasana sleeping Buddha), only very very few of this model were made, which Luang Phu distributed himself handing out to his closest devotees at the temple.

Luang Phu Lampoo finished the amulets in 2502 BE, and began to distribute them. He also took a number of the amulets and hid them back in the Chedi Stupa Gru chamber until the year 2519 BE, after which they were removed and handed out to devotees who came to receive Holy Water Blessing to heal illnesses, which was performed at the temple in that year by Luang Phu Lampoo. 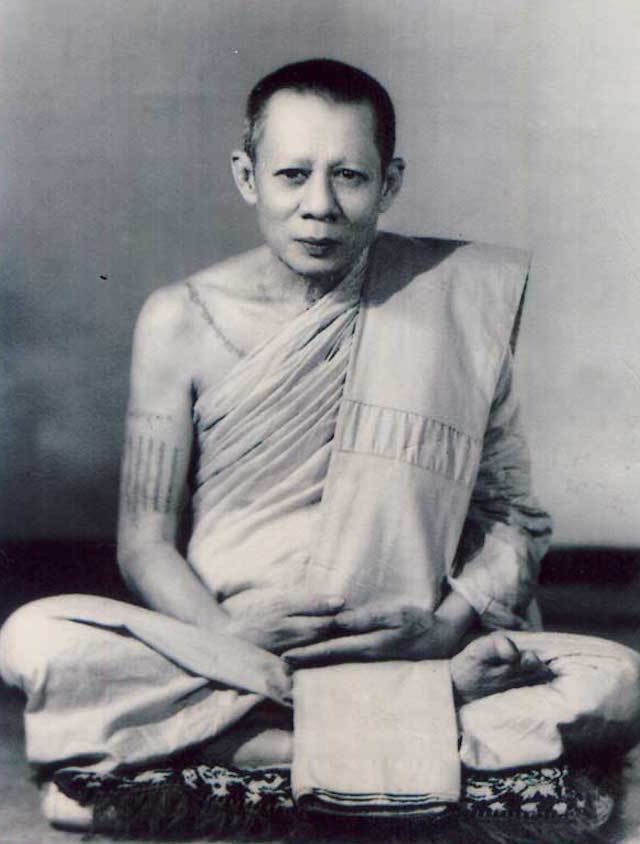 Luang Phu Lampoo also has famous Guru Monk Coin edition amulet, which has a first and second edition, known as the Rian Roop Khai (oval egg shaped coin), and the Rian Met Dtaeng (Watermelon Seed shaped small coin). The coin featured the image of Luang Phu Lampoo sitting in meditation (Samadhi). The blessing of those amulets was made in is Kuti with a number of Great Monks he was befriended with, in the Year 2515 BE. After this Luang Phu Lampoo made and released his 2516 BE and 2517 BE Pra Somdej Wat Bang Khun Prohm, which were blessed in Buddha Abhiseka at Wat Gai Jan, the temple of is original Ordination into the Sangha, where they were also released.

The remaining amulets left over were re-hidden within the Chedi Stupa at Wat Bang Khun Prohm, until the Year 2519 BE. In 2519 BE, the Chedi Stupa was reopened and the amulets from all of his editions till then were removed and re-entered distribution, with certain models being stamped with rubber ink stamps for differentiation from the original releases in 2502, 2514, 2515, 2516 and 2517 Chedi Openings. 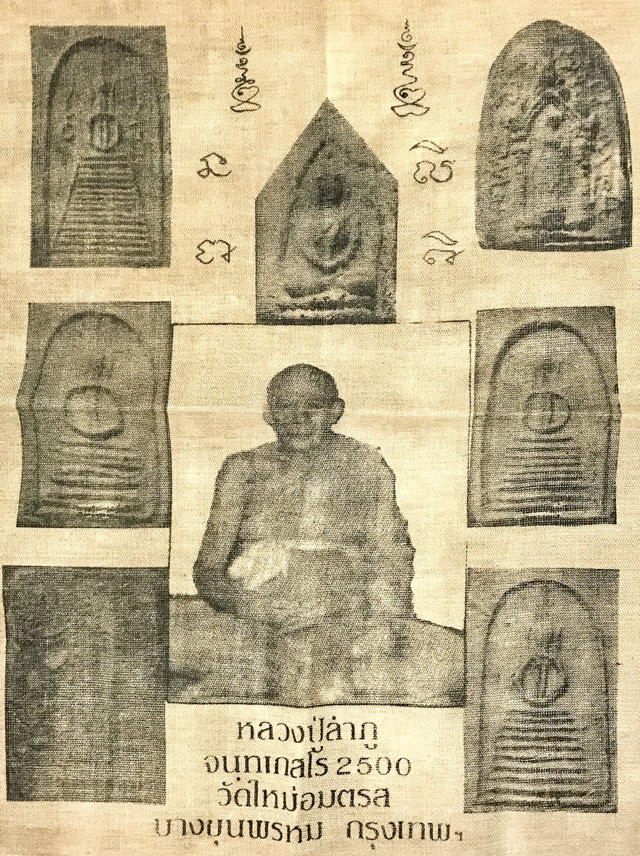 Some years later, in the Year 2521, Luang Phu Lampoo initiated a Kathina Robe Ceremony at Wat Gai Jan in Ayuttaya, to raise funds to help the building of an Uposatha Shrine Room, which was attended by His Majesty the King Bhumipol Adulyadej Rama 9, and Pra Somdej Pra Nang Jao Pra Boroma Rachininat (Her Majesty the Queen), on the 18th July 2521 BE. Their Majesties performed the Intitiation of the raising of the roof beam struts (Chor Fa) of the Uposatha, and performed the 'Piti Dtat Look Nimit' Nimitta Arahant Ball, which is traditionally buried beneath the Shrine Room

Their Majesties installed the Buddha Relic within the Pra Gaes Mala topknot of the Buddha Image, and signed the Sila Reuks foundation stone and Invited the Buddha to dwell within the Image. Their Majesties also planted 2 Pikul Trees (Asian Bulletwood - Latin; Mimusops Elengi), and donated a large donation of funds to the temple of Wat Gai Jan. 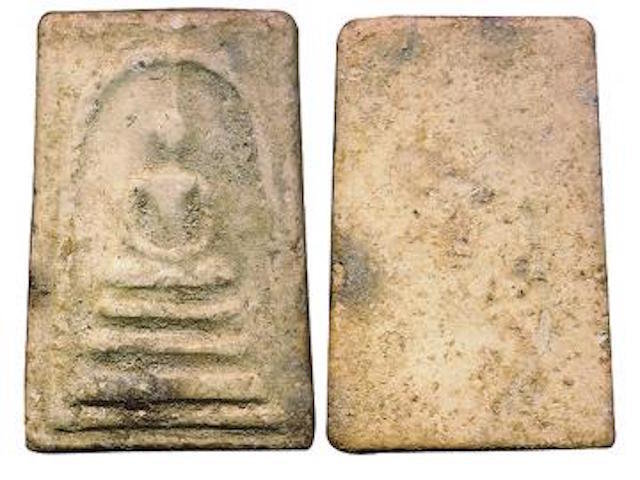 Luang Phu Lampoo is also known to have created Pra Somdej amulets at Wat Gai Jan Temple too, in the years 2521, and 2522 BE, making only one single Pim Model, the Pra Somdej Pim Yai. Many amulets of Luang Phu Lampoo were also secretly hidden under the base of the Pra Pratan Buddha Image at Wat Gai Jan, and in the Year 2542 BE they were removed for distribution.

Below left image; some of the many amulets in the pantheon of Luang Phu Lampoo featured in the Lanpo Amulet Appreciation Society Publication. 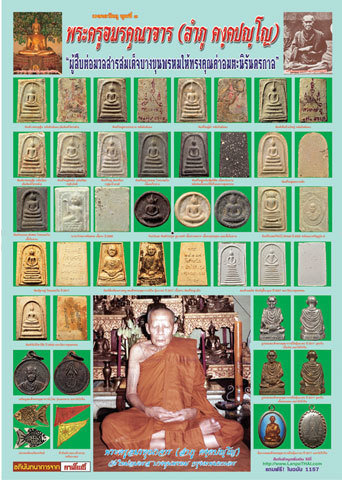 Luang Phu also made some Guru Monk Coins in 2524, which celebrated his 80th Year of Age, and in the same edition, Wat Gai jan also created a Bucha statue in his image to pay respect to Luang Phu Lampoo.

On the 1st September 2533, Luang Phu Lampoo finally passed away, and after one year of respect giving at Wat Bang Khun Prohm, his remains were moved as instructed to Wat Gai Jan, and installed in the Vihara Shrine which he had allocated for himself to be placed in. 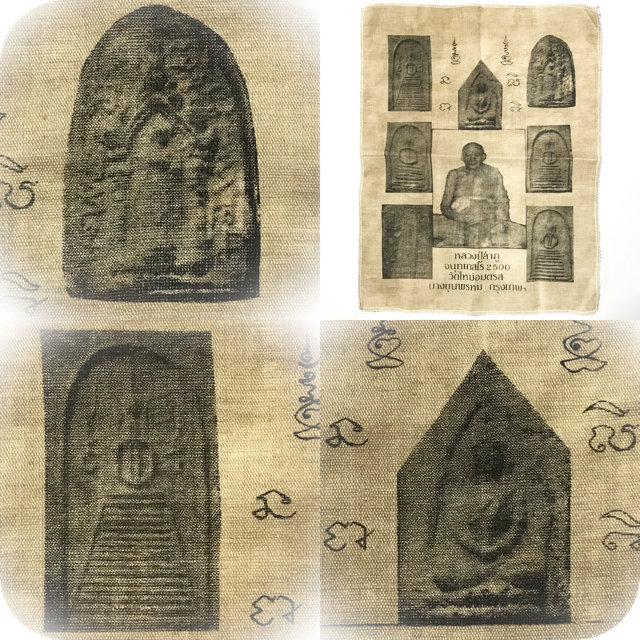