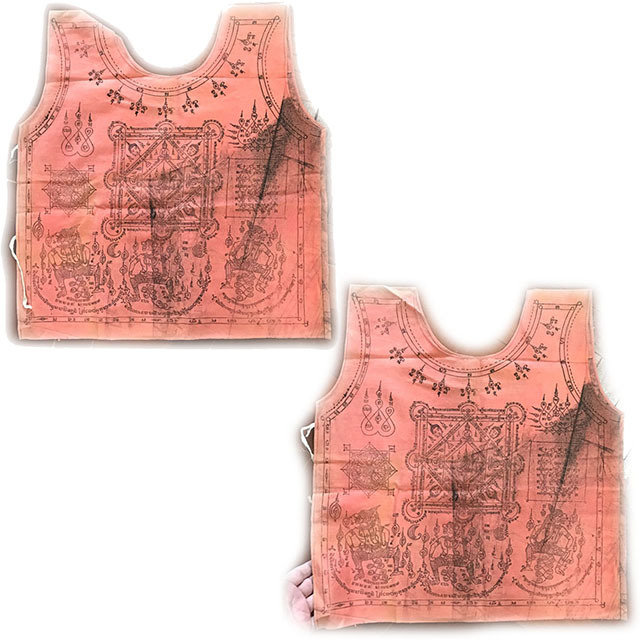 The Suea Yant Maha Mongkol Jaek taharn RobSacred Yantra Shirt for Protection, Power and Promotion, with Auspicious Blessings from Luang Por Supoj, was commissioned by the Army Commander Pralong, for Luang Por Supoj to empower and bless for distribution to the military officers who were in active duty. The Suea Yant is a very rare item to see in this day and age, and is highly renowned for Kong Grapan Klaew Klaad, and Metta. 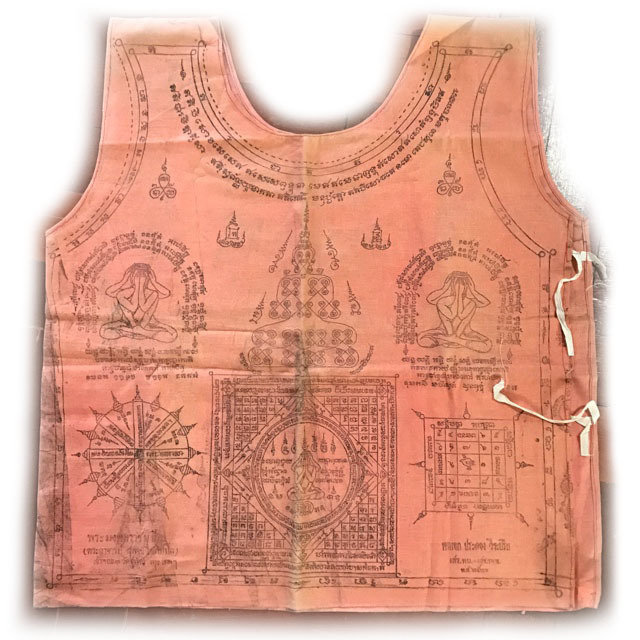 The Suea Yant were blessed at Wat Sutat in the Year 2520 BE with lp Supoj, and various other great Master Monks of the time, including the Great Luang Phu To of Wat Pradoo Chimplee. The front of the Suea Yant bears a plethora of Yant, with various versions of Yant Pra Pid Ta Maha Ud for Gunstopper and Invincibility against penetrative sharp objects, and to increase evasion through invisibility magic (Klaew Klaad), the lower section bears the round 8 directional Yant Paed Daan with the Itipiso Hong Dton Mantra (to our left) in the center a square 'Maha Yant Pid Tawarn, with the Yant Pra Putta Nimit Buddha Yantra seated over it in the center of the upper part of the Suea Yant. The Square yant Nok Kum Partridge Yantra on the viewer's lower right, endows the wearer with flameproof Magic

The rear side of the Suea Yant has two kinds of Yant Nam Tao Gourd Yantra on the left and right upper section of the shirt, with a Yant Maha Ud, with Four Brahma Devas in the cardinal directions, with the Yant Grao Paetch Diamond Armour Yantra, to one side, and the Yant Duang Astrological Yantra to the other side of the central section. Below these Yant on the lower section, are three Vanora Deities; Pali, Chompoopan and Ongkot, who were relatives of the God Hanuman, and were Generals in the armies of Rama as recounted in the Ramakien (Ramayana) Vedic Legend. All three of these Vanora are able warriors with supernatural strength, and demon slayers in their own right. 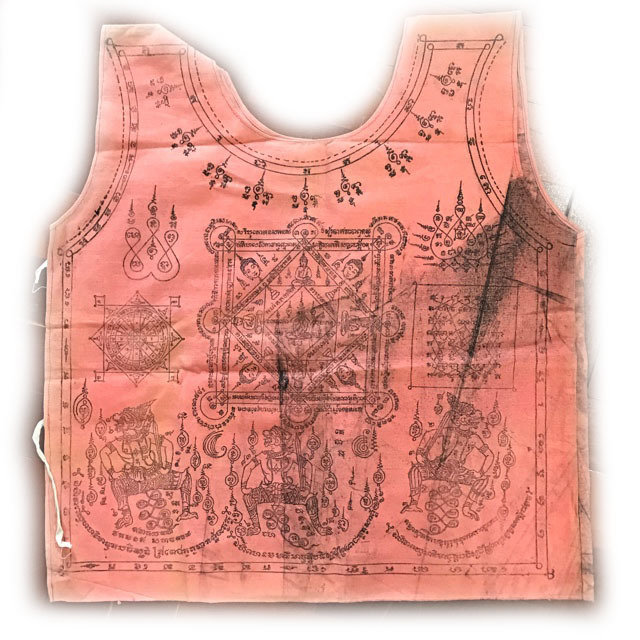 Luang Por Supoj was famously responsible for the creation of one of the most famous editions of amulets in the History of Thai Buddhist Amulets, the 2485 BE 'Pra Chud Indojin' Indochina wartime blessing ceremony edition, considered one of the three largest and most important blessing ceremonies in history. Luang Por Supoj was one of the Important Gaeji Ajarn Monks of his Era, and a colleague of the other Great Masters of the Royal Bangkokian Temples of Wat Sutat, Wat Rakang Kositaram Wat Bang Khun Prohm.

Below; Chompoopan (Jambavan) The King of Bears, Son of Pali (Vali), brother of Ongkot - Chompoopan possessed Wicha Wan ya for herbal healing, and bestows protection against ailments, and speeds healing processes. 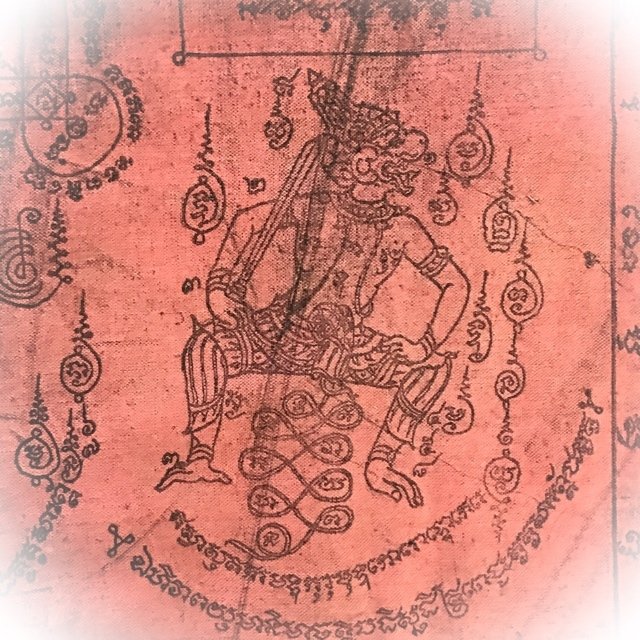 Below; Paya Pali (Vali), father of Ongkot and step father of Chompoopan. Pali was renowned for his ability to seduce lovers, and was said to have possessed the most powerful Magickal Powers. He actually overpowered and kidnapped the Lady Nang Montoe who was to be the wife and consort of Totsagan (Ravana). Pali possesses many Incantations to Invoke and to revoke Sorcery, and can be used to cast spells or to remove them. 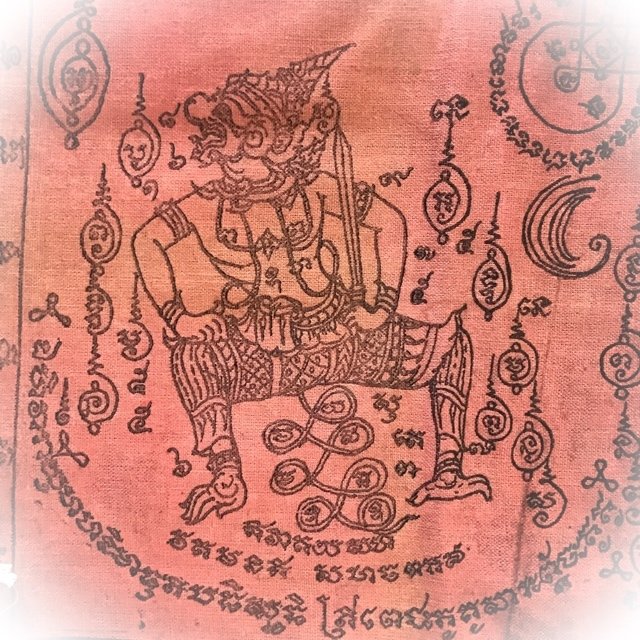 Luang Por Supoj was known for his silent manner, and his great ability to perform the Wicha Lob Pong, which is the Magical Occult Art of making sacred powders by inscribing Sacred Yant Inscriptions with Sacred Chalk on a special wooden board, in an immensely extensive formula which completes the full compendium of 108 Sacred Yantra spells. The powder residues from the Sacred Chalk was then collected, and used to make a new chalk stick. The chalk stick was then used to inscribe another 108 sacred Yant, until the process was performed 5 times in a row.

Other ingredients used to make the the amulets of Luang Por Supoj support the study and appreciation of the Dtamra Pra Somdej Wat Rakang Kositaram, with the inclusion of broken amulets from the other Great Members of the Dtamra, including broken pieces of Pra Somdej of the Great Somdej Pra Sangkarach (Pae), and Luang Por Jao Khun Sri (Sonti), and Jao Khun Tip Gosa, who were foregoing Masters of of Wat Sutat, and Colleagues of the great Somdej Pra Puttajarn (Dto) Prohmrangsri. 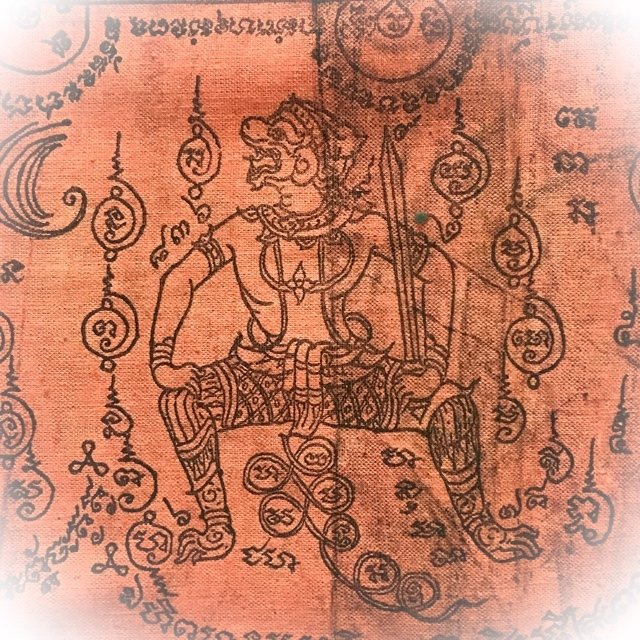 He was a close friend and colleague in amulet making with Sangkarach Pae, Luang Phu Nak, and Pra Kroo Lamoon. For his amulets, he was able to receive a generous portion of Muan Sarn Sacred Powders and broken old Pra Somdej Wat Rakang Kositaram of the great Somdej Pra Puttajarn (Dto) Prohmrangsri from Luang Phu Nak. 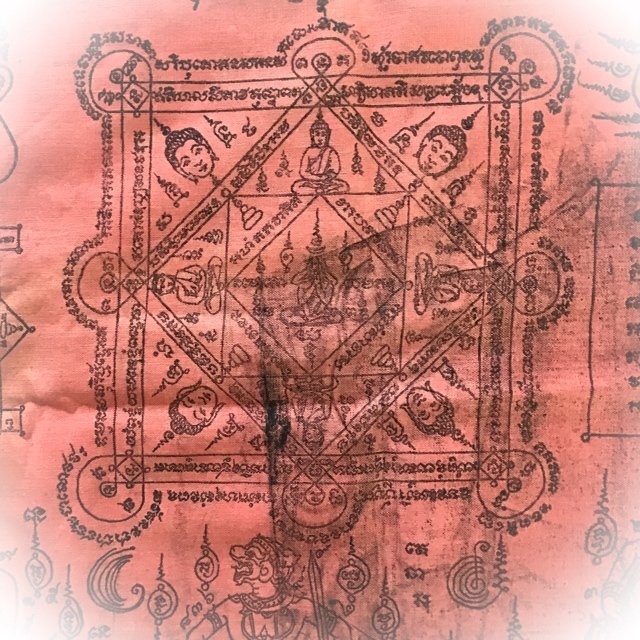 Luang Por Supoj gathered and saved up a large repository of the most powerful powders, and as many Pra Somdej Wat Rakang Kositaram pieces as he could before he made his Muan Sarn Sacred Powders for the amulets he had planned, and other amulets which devotees had brought to him when they broke, and ground them down into the extremely rich and sacred Muan Sarn. It is the powerful Muan Sarn clay, and the great Indojin (Indo-China Wartime) Blessing Ceremony that has made his amulets so Important and Sacred from a religious, national, and Historic point of view. 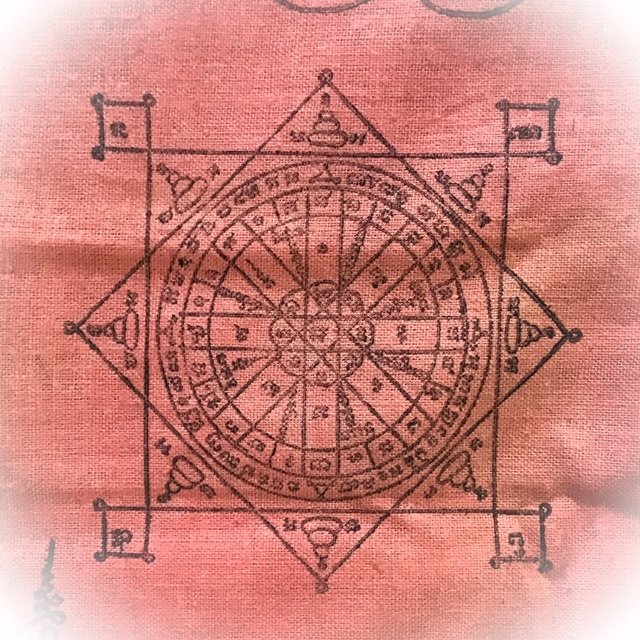 The presence of pure Pra Somdej Wat Rakang Kositaram Somdej Pra Puttajarn (Dto) Prohmrangsri in the clay of his amulets is what has made them so highly regarded and famous historical artifacts in the present day, as well as the fact that all amulets blessed in the Piti Indojin Indo-China War Ceremony are considered to be powerful Master-Class amulets. The Piti Indojin Ceremony was considered to be the second biggest and most important amuletBlessing Ceremony in the History of Thai Buddhism. 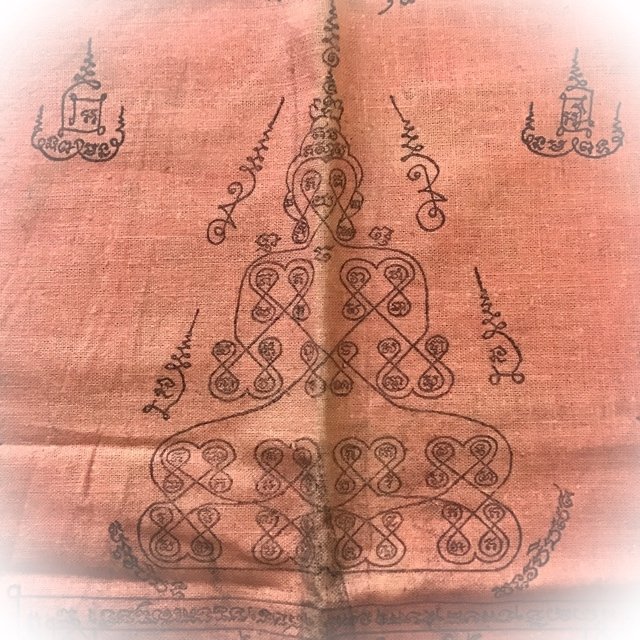 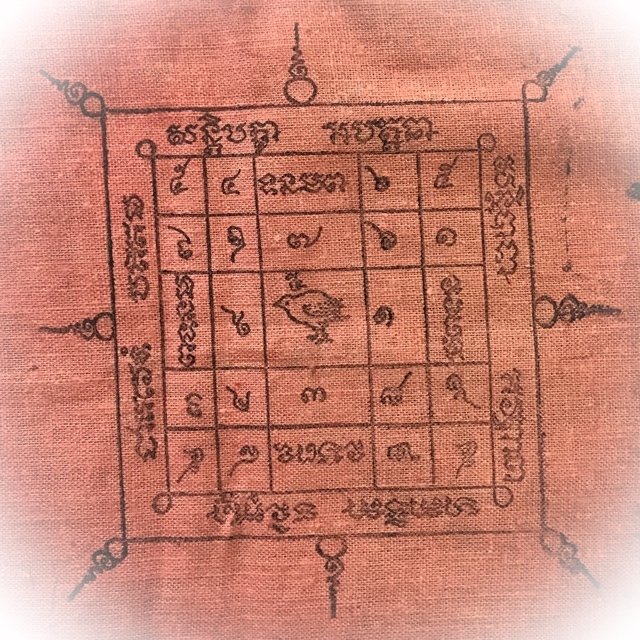 The Nok Kum is a kind of bird which the Lord Buddha was once born as in one of his last 500 lives before enlightenment. The Nok Kum was born and one day, the parents flew out of the nest in the forest to fly over the fields and find food. As they were away, a forest fire started, and began to consume the tree which the Nok Kum was nesting in.

The Nok Kum thought to himself; “Apart from Morality and Truth, there is nowhere else for me to refuge!” So he chanted this Kata which translates as; "I have both wings, but they are still too small to fly and i cannot fly away – i have both legs, but i am not yet able to walk, for i am still a baby – my parents are flown from the nest and cannot save me, You oh Fire must go back where you came from”

Because the Nok Kum was the Future Buddha, his Baramee was already so powerful that the Kata worked, and the fire died out. The tiny Nok Kum may seem like a peaceful turtle dove, but in fact its Kata did not only save himself, but also the whole forest. When made as a Pha Yant (Yantra Cloth)it is very good for preventing fires in the home, or if worn, from death by fire. 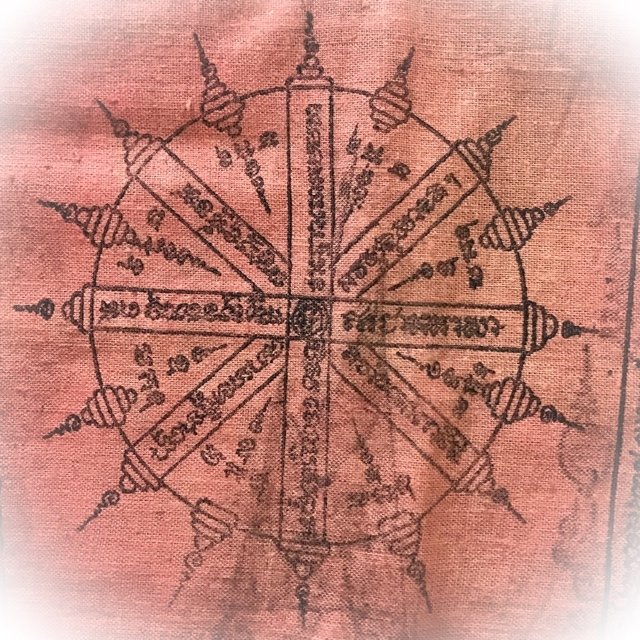 (For Protection in all eight directions of Time and Space) 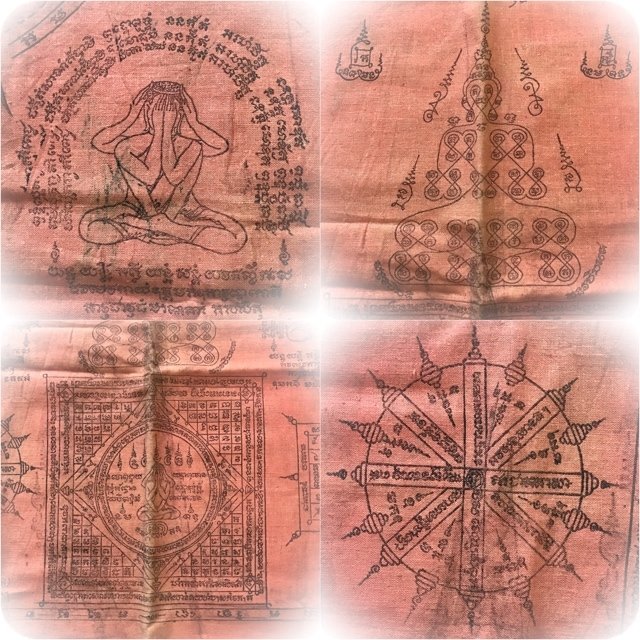 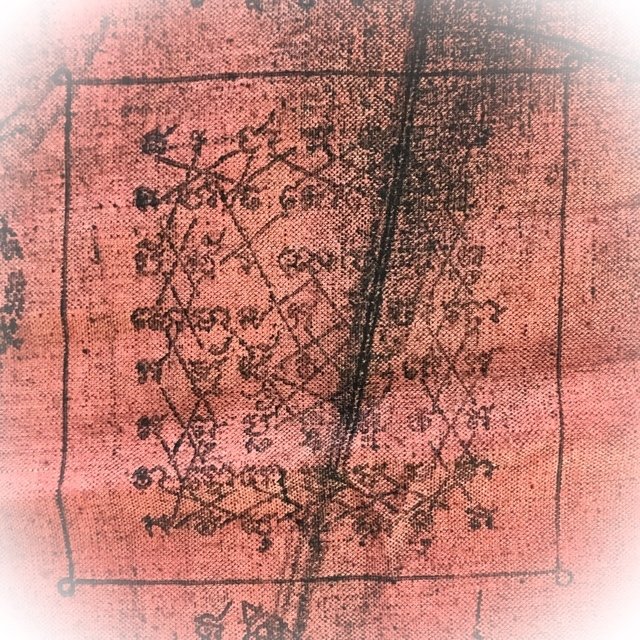 Luang Por Supoj was considered one of the Great Masters of High Ability to 'Pluk Sek Wadthumongkol' (Bless and Empower amulets), and for this reason was one of the Masters who were always invited and asked to assist in empowerment of some of the most important Blessing Ceremonies in History, including the 25 Centuries of Buddhism Ceremony (3rd Biggest in History), the 2506 Wat Prasat Ceremony (4th Biggest and Important Ceremony in History), the Piti Pluk Sek Chonburi 2509 Ceremony (Wat Pha Chonburi). 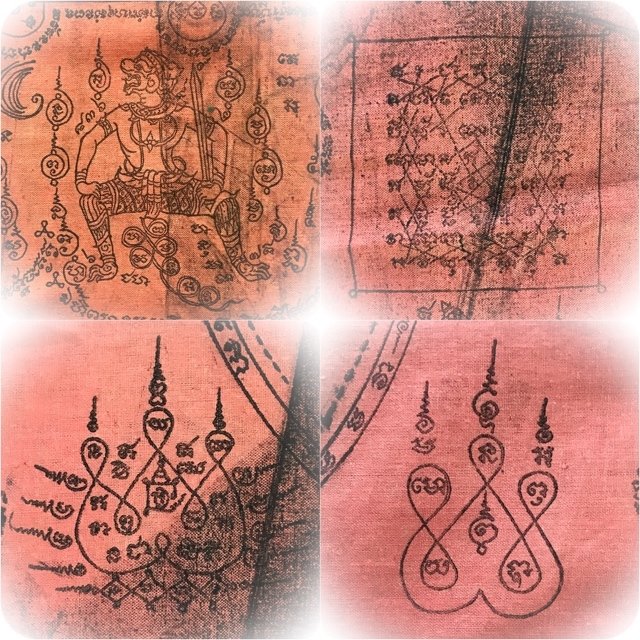 Below; The name of the sponsor Pon Aek Pralong of the Regimental Army, and the date 2520 BE are printed onto the Yantra shirt. 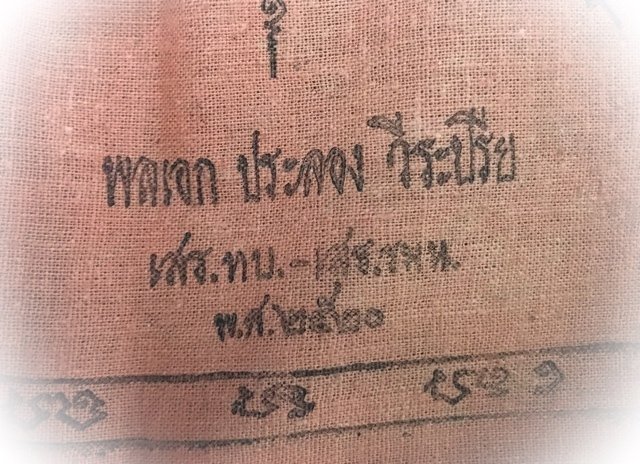 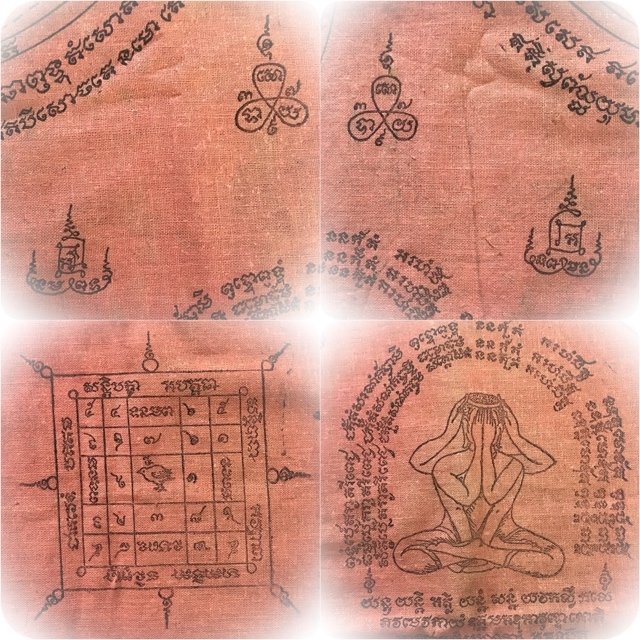 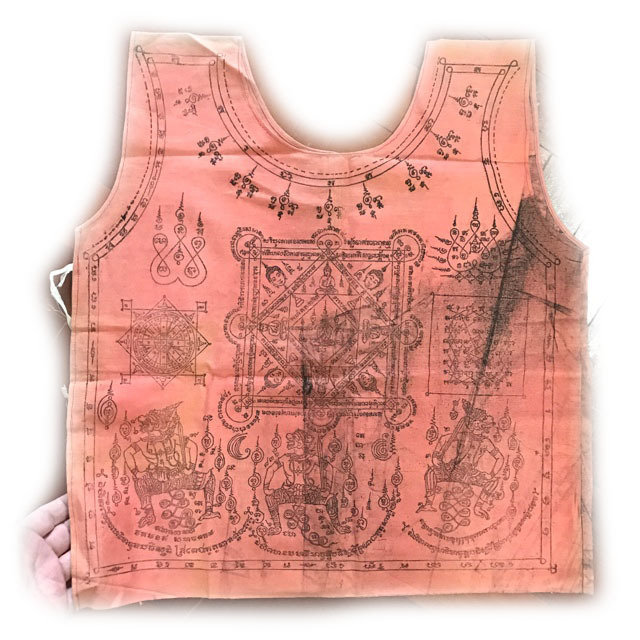