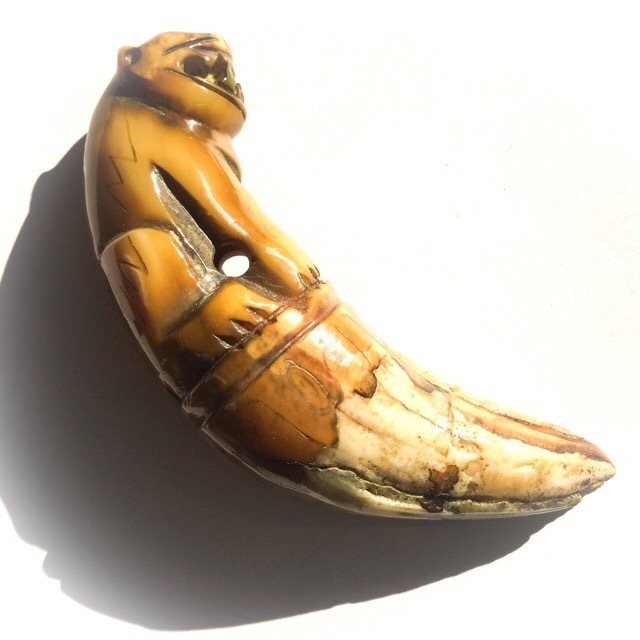 The amulet has a beautiful Patina from aging through the many decades iof time that have passed, and thorugh contact with the skin of devotees, and is a most pristine example of a Khiaw suea Kroeng as could be desired for. 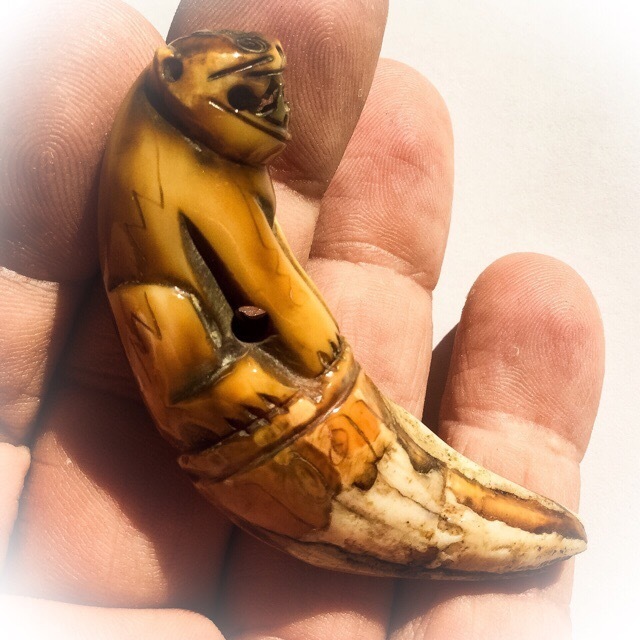 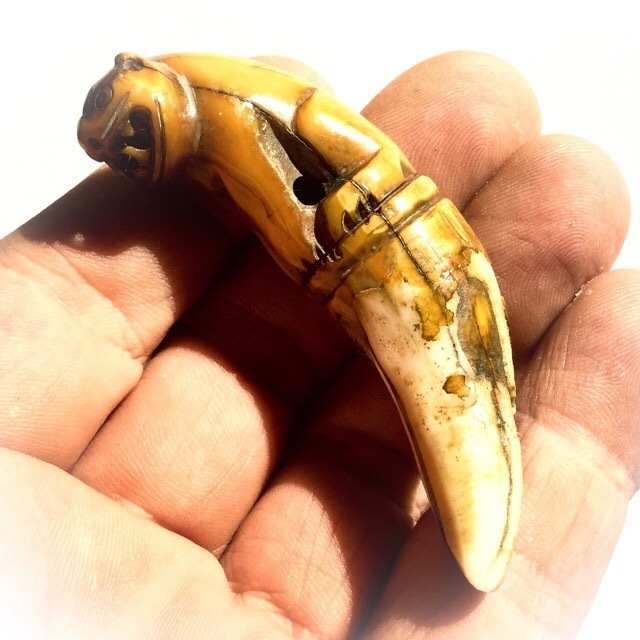 Khiaw Suea are full of Maha Amnaj, Kong Grapan Chadtri and Metta Mahaniyom-Maha Sanaeh Magick, and possess Anti Black Magick Forces in their very nature. An excellent Status Increase Talisman to Impose your Superiority and Status and Rank over others, and to protect you from deadly Dangers and Weaponry, as well as to Increase Seductive Charm and Chances of Promotion. The temple of Wat Kong Dan (Wat Bang Hia), is of course a World famous Historical Temple of Monumental Status in the Amulet Scene for the fact that this was the temple of Luang Por Parn, Master Wicha holder of making famous Tiger Tooth and Carved Tiger amulets, whose amulets are now of the 'Maha Sethee' Master Class, highly favored and collected by the wealthy collector, which has caused these amulets to become amongst the most expensive of their genre. 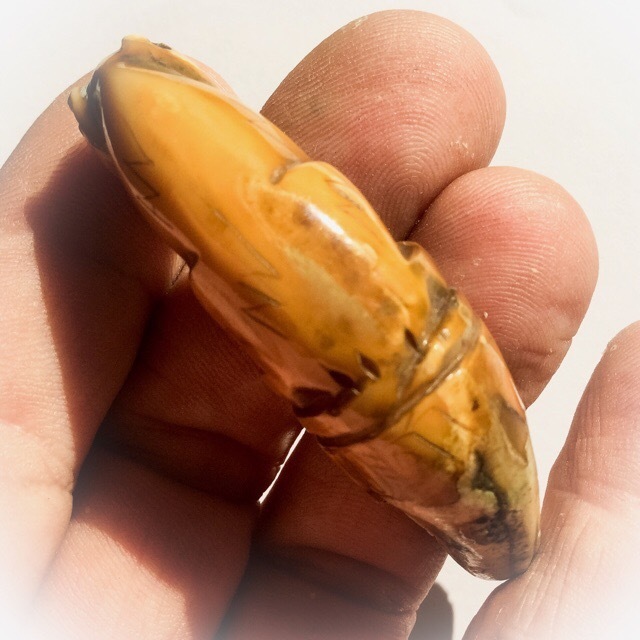 Many people think that Luang Por Parn of Wat Klong Dan is a different Master to the Luang Por Parn of Wat bang Hia, but this is a Myth, that is perpetuated by people's ignorance of the fact, that wat bang Hia, in Bang Bor, Samut Prakarn Province, is a different temple to the temple of Wat Klong Dan. The truth is however, that the word 'Hia' which means both 'monitor lizard' (which is the true reason for the temple being named Wat bang Hia, due to a lot of Monotor Lizards being around in those days), also is a swear word, meaning 'very bad person'. Because the name of the temple of Wat Bang Hia was seen as Inauspicous to some people's ears, it was changed to 'Wat Klong Dan' 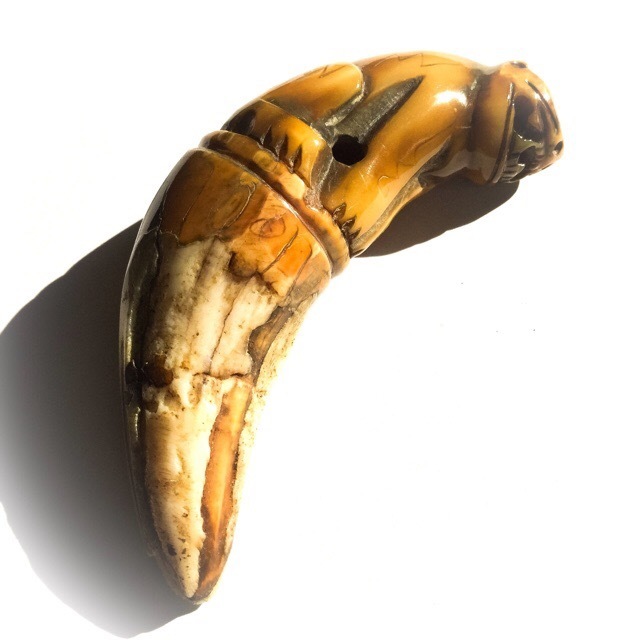 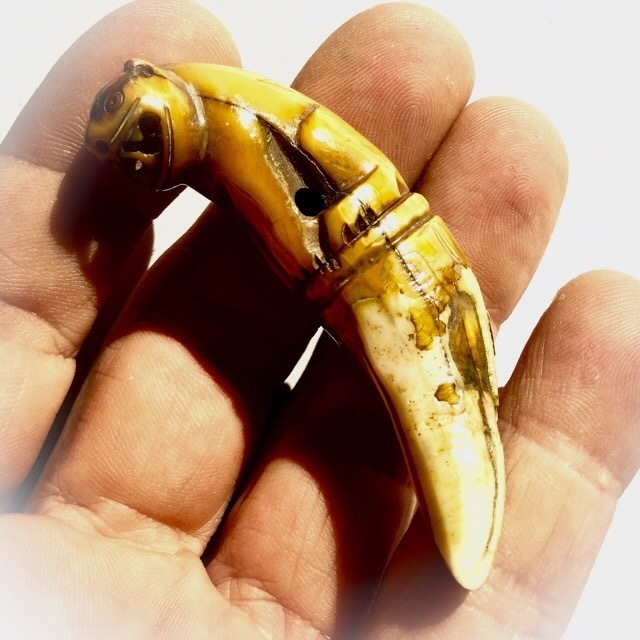 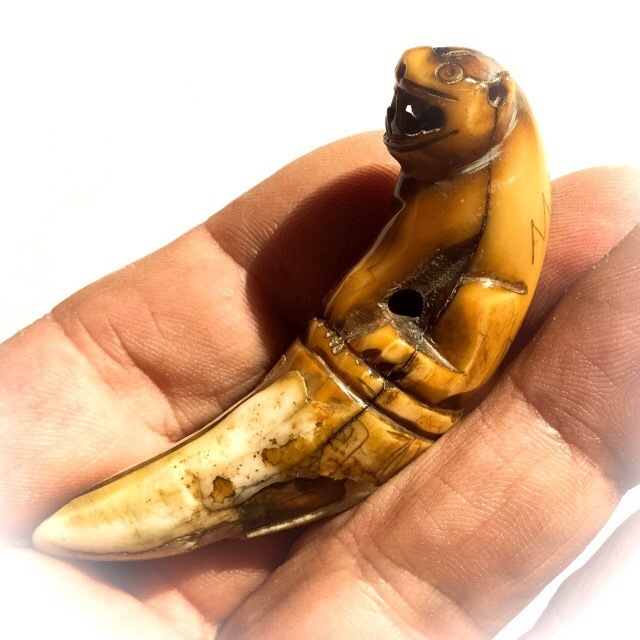 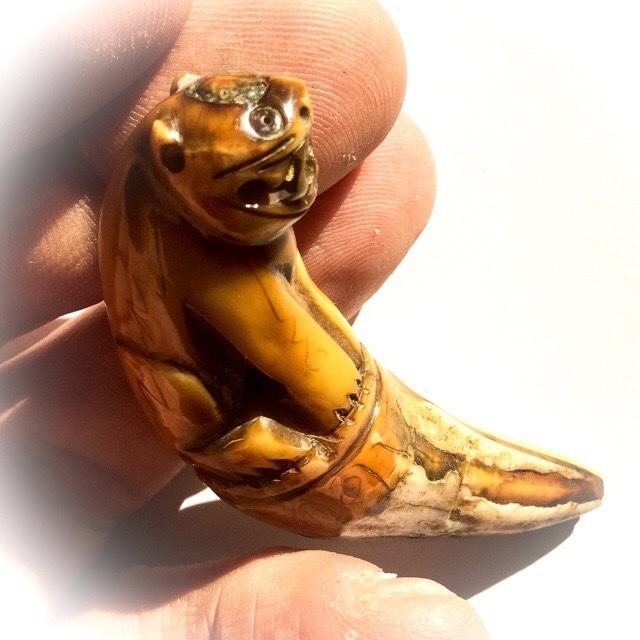 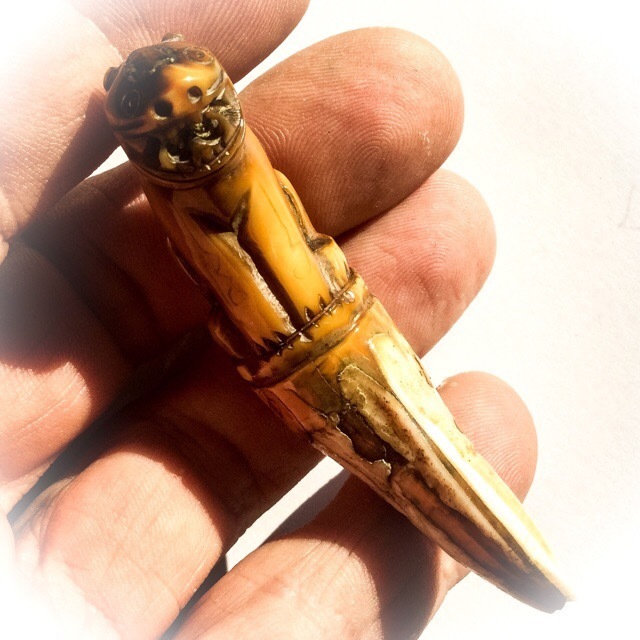 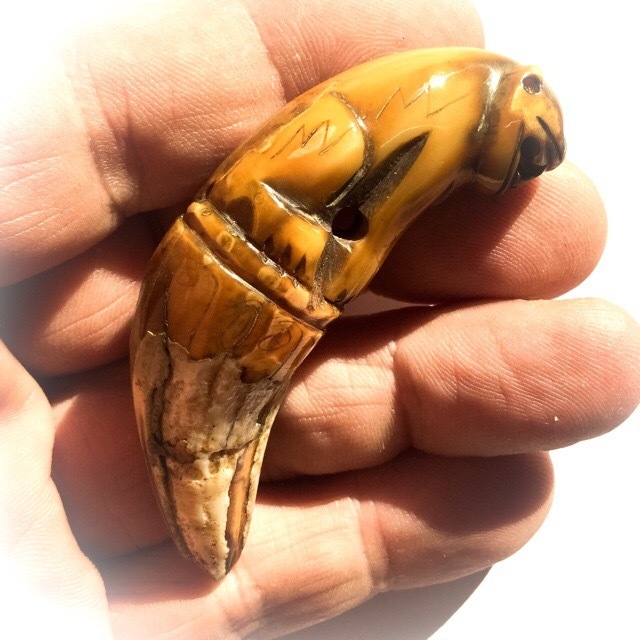 The hand inscription is inimitably inscribed in the handwriting of Luang Por Say, and hence easily recognizable for its style of Agkhara lettering, noticeabe for its 'lightning flash' like Agkhara inscription, which is ubiquitously present with tiger teeth of Luang Por Parn. 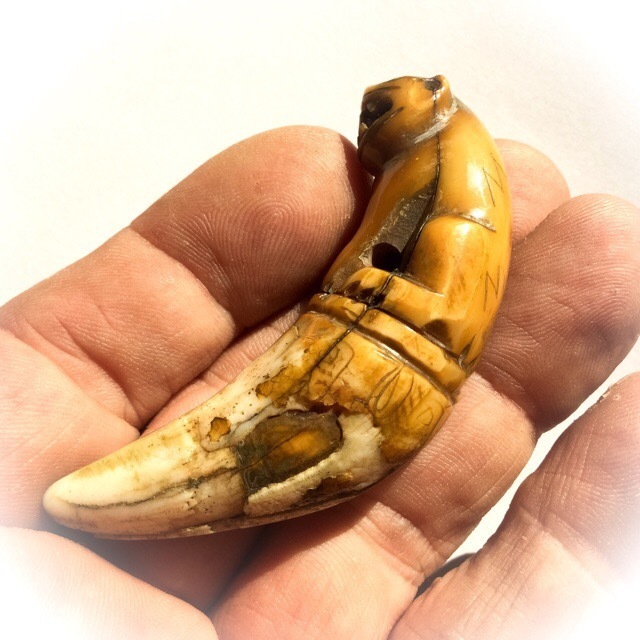 The tooth can be encased if desired in waterproof casing for attachment as a pendant. One could say that this exhibit is an extremely pristine and beautiful example of Khiaw Suea Kroeng, with most beautiful features, and highly visible inscription, revealing the authentic evidence of the hand of a preferred artisan of the great master Luang Por Parn 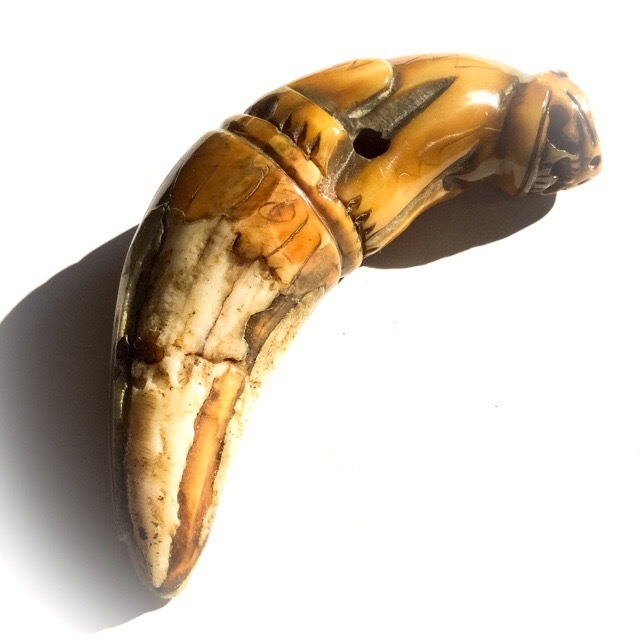 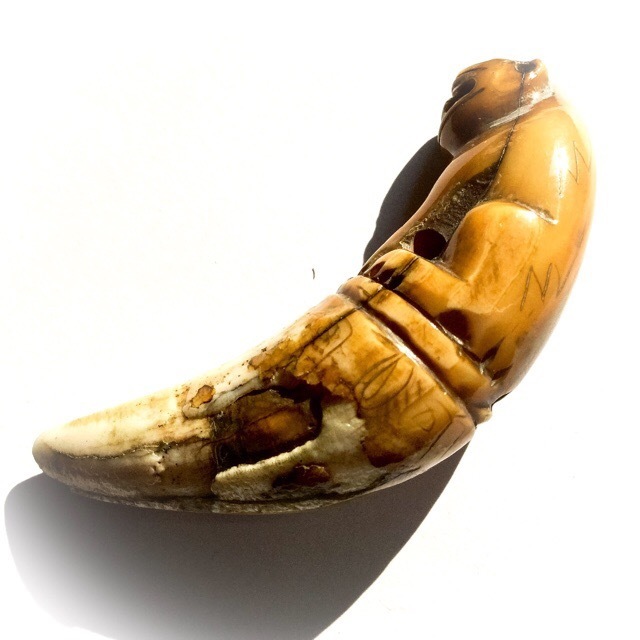 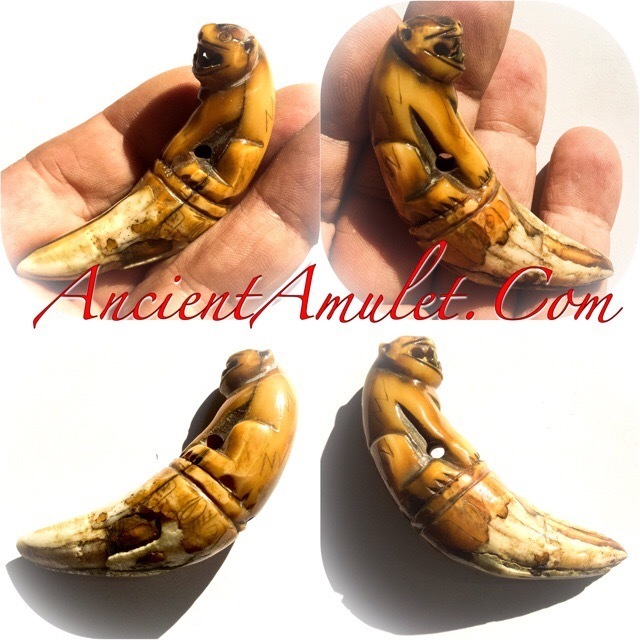