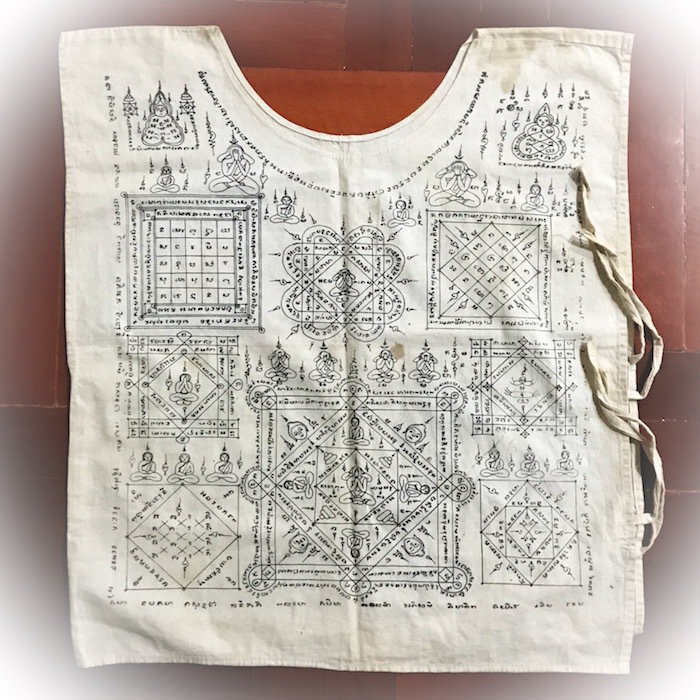 Luang Por Jad was a powerful sorceror-monk of the Indo-China War Time (Indo-China War was fought between December 19, 1946 – August 1, 1954), and in the Vietnam War 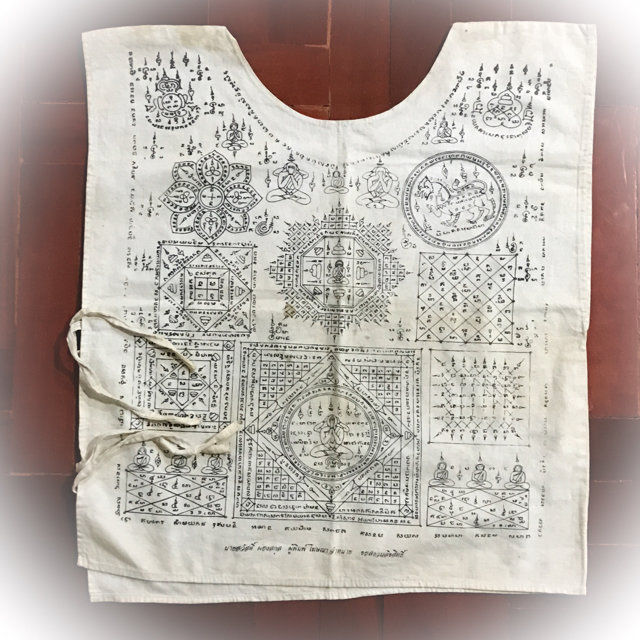 Thailand sent nearly 40,000 volunteer soldiers to South Vietnam to serve alongside the Free World Forces in the conflict, but unlike the other foreign participants, the Thais came armed with historical and cultural knowledge of the region. Blending the methodologies of cultural and military history, as well as their mysterious Buddha-Magic, as was seen by the foreign soldiers who saw the Thai Military wearing 'Suea Yant' Magic Cloth vests with covered Sacred Geometry Spells. 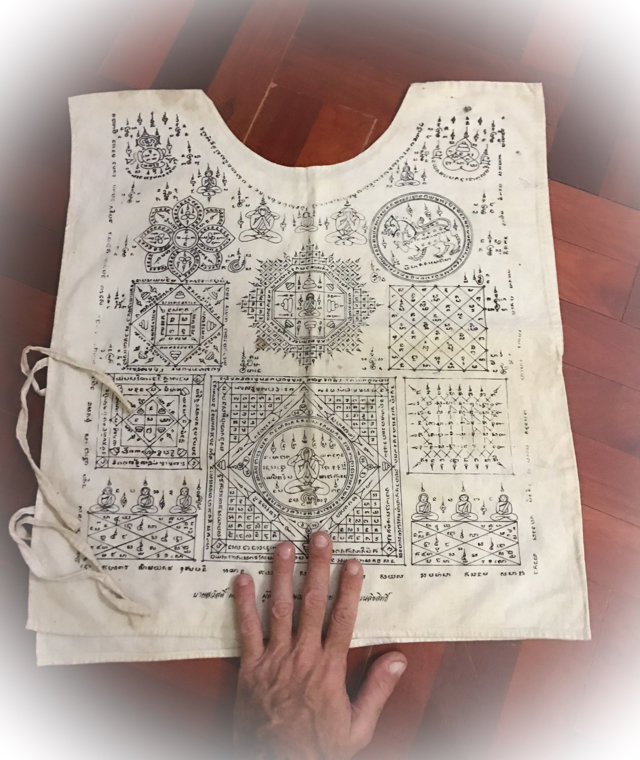 The Thai volunteers in their wartime encounters with American allies, were often seen to be hit by bullets, and stand up again unhurt, which caused the Thai soldiers to earn the nickname 'Taharn Phii', meaning 'Ghost Soldiers'.

Luang Por Jād Kongkasarō, of Wat Bang Grabao in Prajinburi Province, was born on the 17th March 2415 BE, the Year of the Monkey, as the son of Mr. Bpo Wong Gampuch. At the age of 20 he was taken by his father to the temple of Wat Ban Sang, to begin to learn with the monks, and prepare for his Ordination into the Sangha, which was, and still is a practice of Male Children, who ordain at least once for a shirt time to dedicate merits to their parents 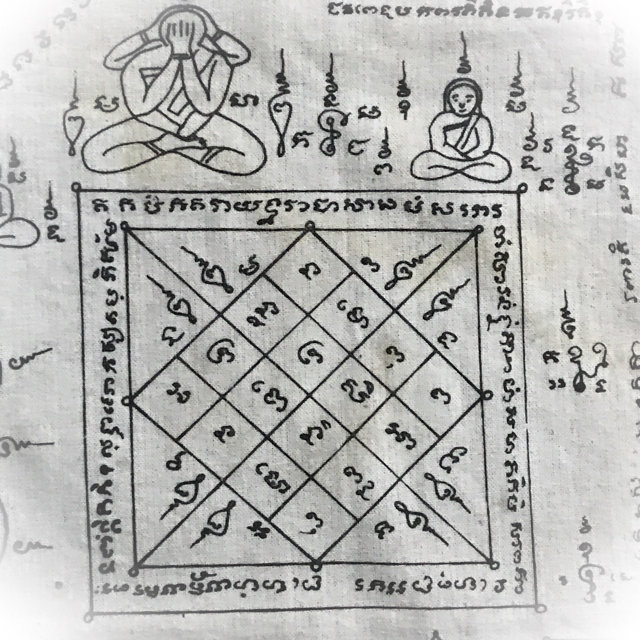 He studied under his Kroo Ba Ajarn at the temple to prepare himself, and finally ordained at Wat ban Sang, at the age of 21 years old on the 13th April 2436 BE. Luang Por Jad spent 84 Years in the Ordained Sangha, up to the day of his passing on 10th November 2499 BE.

He was a highly Adept in his knowledge of Buddha-Magic and Incantation. it is said in the Sutras already, that no practitioner who attains the paths of the Noble Ones, can circumvent attaining the Abhijnya Powers beforehand. He possessed Wicha from Pra Ajarn Jan whom he had studied under to master the Wicha Bang Prai Long Hon Invisibility Invocation, and other powerful spells. 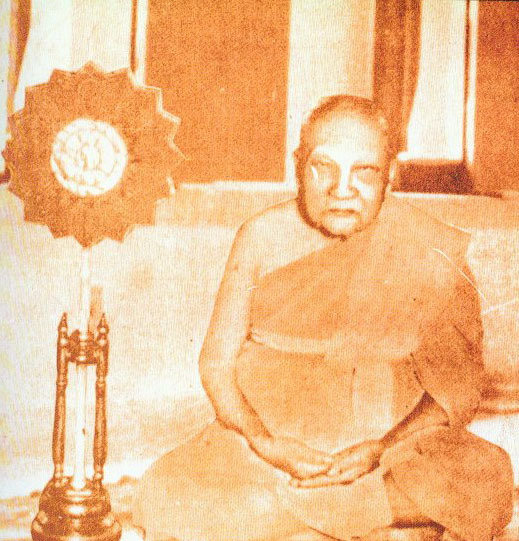 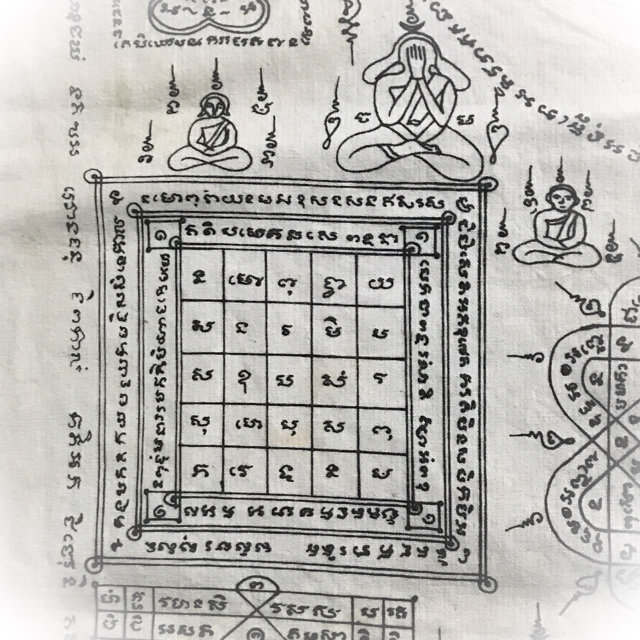 After he learned Wicha with Pra Ajarn Jan, he traveled to Wat Krai Siha tin Bang Kapi in Bangkok to study the Pariyatti Dhamma Theory. During this time he received and mastered many Wicha from his various Kroo Ba Ajarn, and became an Adept in is own right, whose Wicha Akom became so powerful that he was to become one of the eminent members of an elite group of monks whose powers were reputed to have saved the lives of countless Thai Soldiers, navy and Airforce during the Indo-China Wartime. 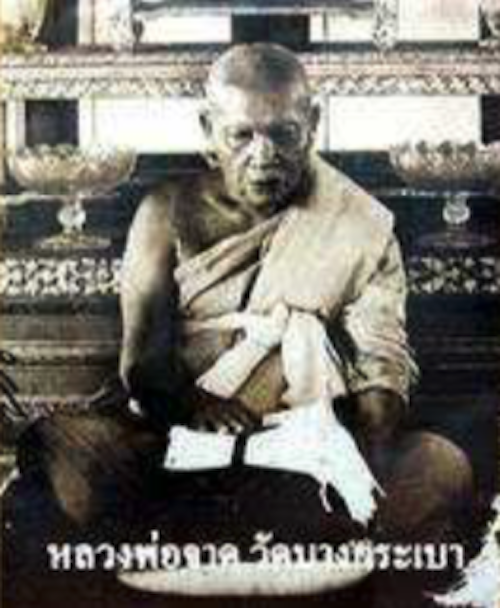 Luang Por Jad is counted along with the other Great Masters Luang Por Jong (Wat Na Tang Nork), Luang Por Chaeng (Wat Bang Pang), Luang Por Opasi (Asrom Bang Mot), Luang Por Kong and Ajarn Chum Chai Kiree, as well as the temple of Wat Sutat, to have provided the most powerful miraculous amulets to the Thai Military to protect them from danger and death during battle. 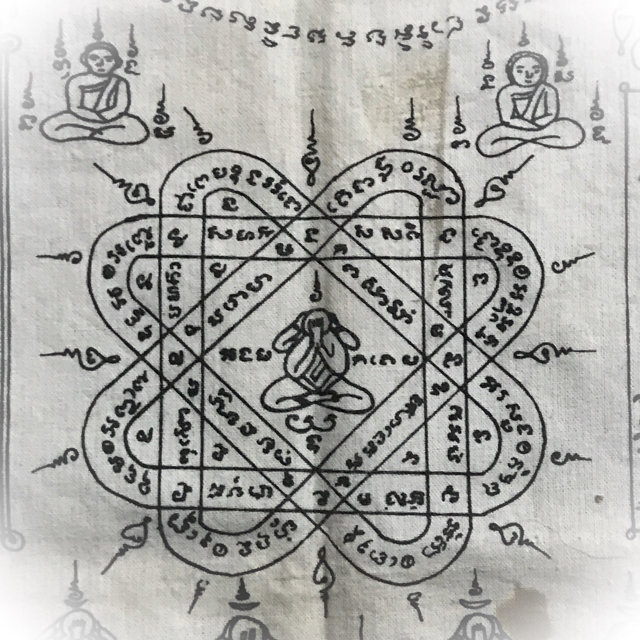 In the Year 2481 BE, as the Indo-China Burapha Wars were in sequence, Luang Por Jad made a special series of Suea Yant Yantra Cloth Shirts to distribute to the members of the Military who were volunteering to fight in Foreign Struggles, which he commissioned the Piboon Songkram Military HQ to distribute. The Suea Yant themselves were made in two colours, red, and white. 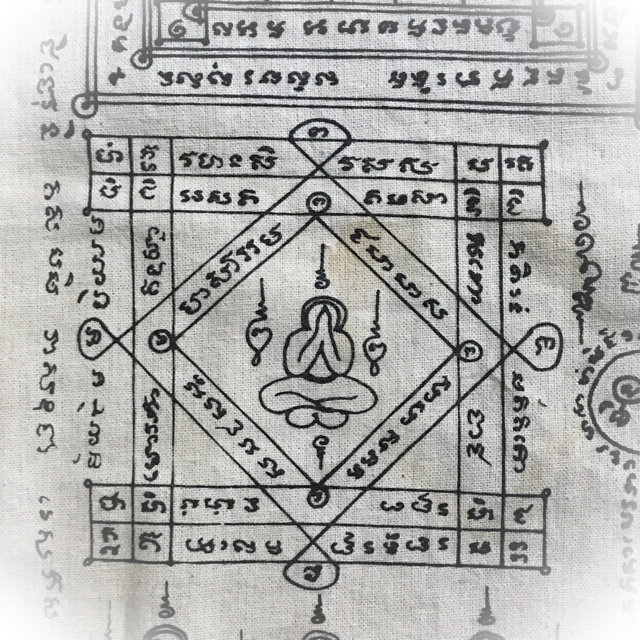 The white versions were made in much smaller numbers, to hand out to the higher ranking officers, state officials and close relations with the temple. The French Military gave the name of 'Ghost Soldiers' to the Thai Soldiers, who they saw wearing red vests covered with Occult Inscriptions in Khmer Sanskrit, and were amazed to see miraculous survivals of soldiers wearing their 'Krueang Rang' occult talismans, and 'Suea Yant Gan Pai' protective magic vests. 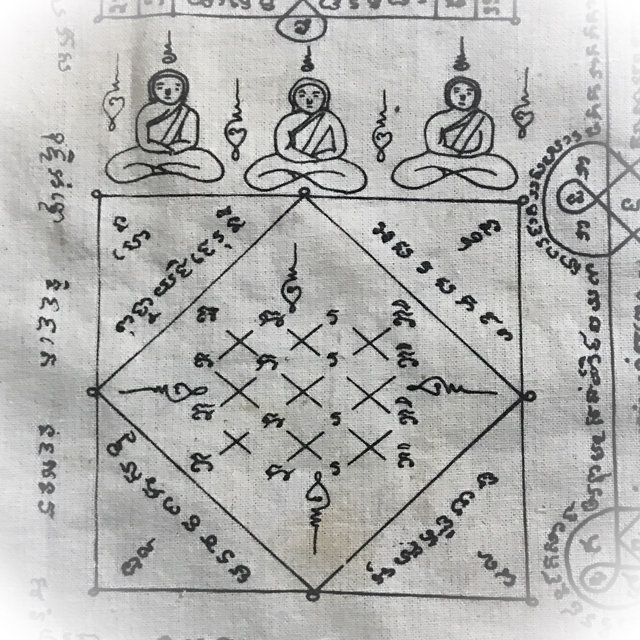 The white version is an extremely rare item to find, and is considered a Historical treasure for its importance as a Historically Documented Legend which denotes Thailand's 'Taharn Phii' Ghost Soldiers, and pays Homage to the Power of Luang Por Jad Magic and the Reslilience of the Thai Military, as they Volunteered to risk their lives during in the Indo-China Wars. 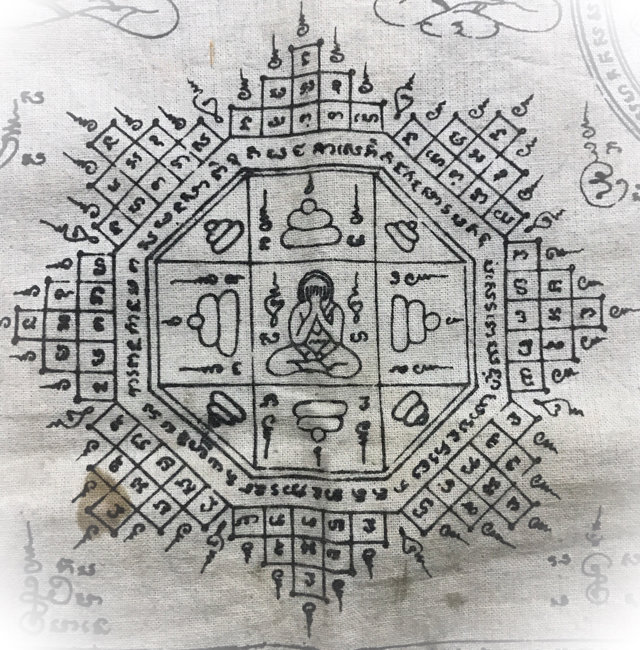 Luang Por Jad also released many other amulets, both with the same edition as the Suea Yant shirts, and in previous years. Amongst his most famous amulets is his Rian Nang Dtem Ongk Monk Coin featuring Luang Phu Jad seated in full body meditation posture on the front face, and the Ongk Pra Maha Ud seated within a Lotus Yantra spell on the rear face, made in Nuea Tong Daeng (sacred copper) and Nuea Ngern Long Ya (solid silver with Ya Rachawadee enamel glaze). 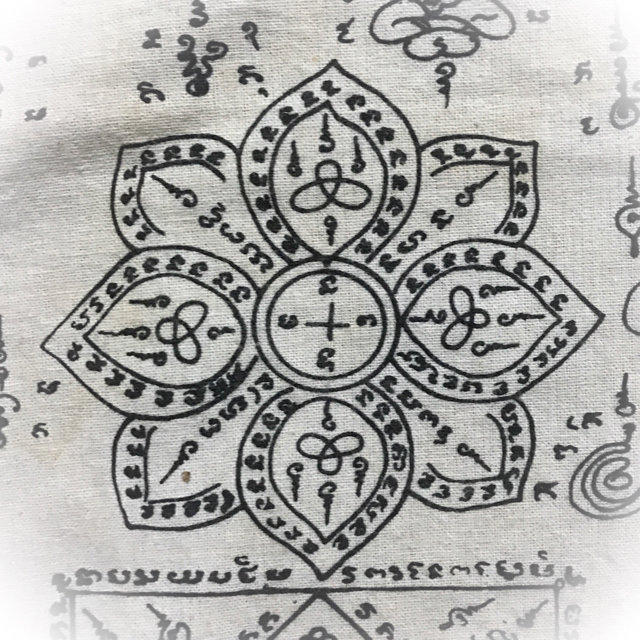 This famous coin amulet came to the ears of the Nation when the French Airforce dropped a bomb on a regiment, many who wore the coins and/or the famous Suea Yant which were distributed to them, but nobody in the regiment was harmed at all from the bomb.

Apart from this there is one amulet which cannot go without mention when speaking of Luang Por Jad; The Hwaen Mongkol Gao 9 Auspicious Blessings Finger-Ring amulet, which was given to the soldiers going into the frontline to battle, risking their lives. 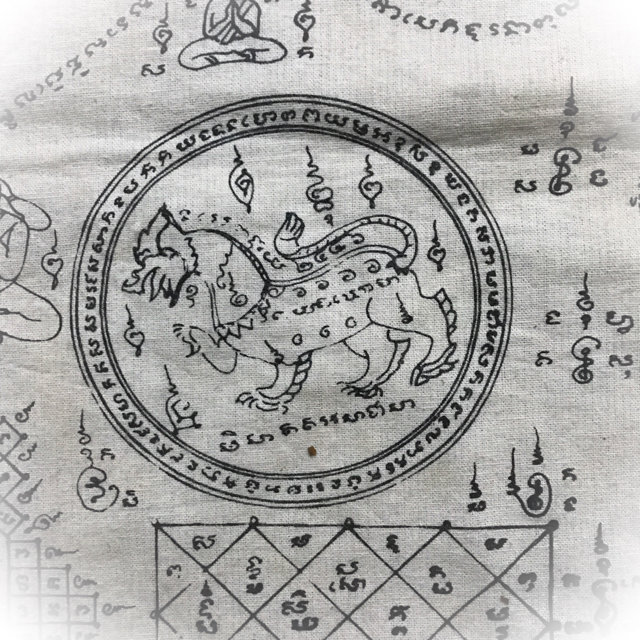 These amulets of Luang Por Jad, and of the other Great Masters of the Indo-China wartime, became the reason why the Western Forces be they allies or invaders, would learn to fear the magic of the Thai Volunteer soldiers, and give them the Mystical Name of 'Taharn Phii' the Thai 'Ghost Soldiers' Their Invinciibility was as Legendary as their Magical Talismans, which they wore in battle. Luang Por Jad passed away on the 10th November (some people argue it was June) 2499 BE, at the age of 85 years old. 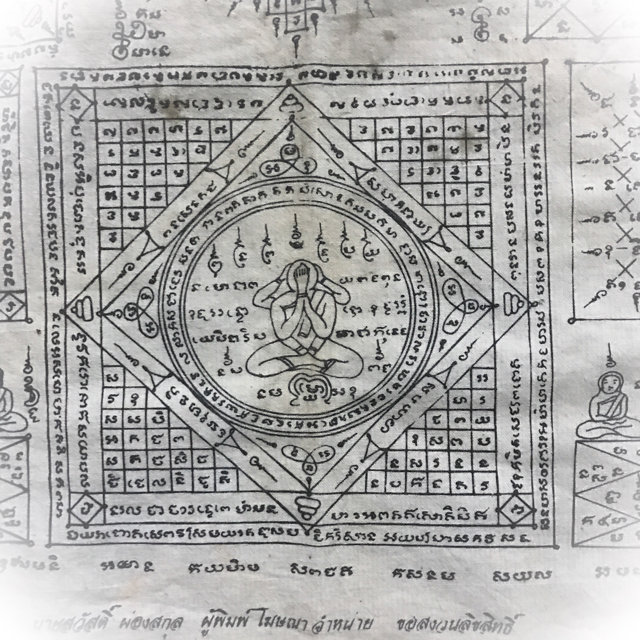 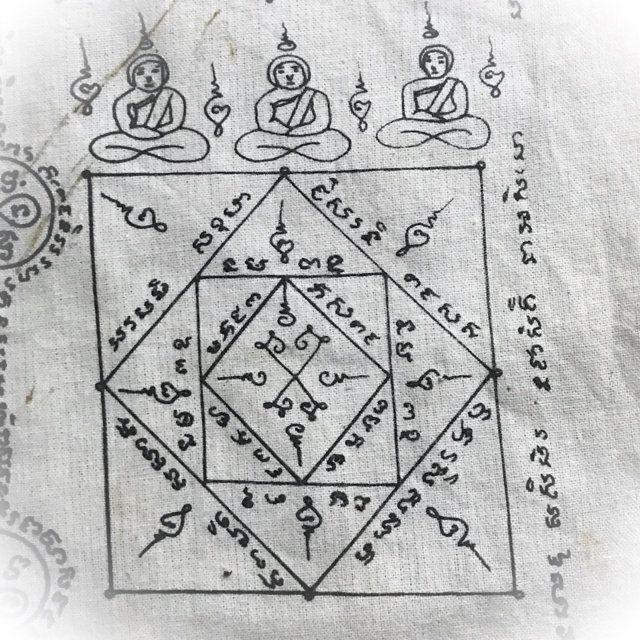 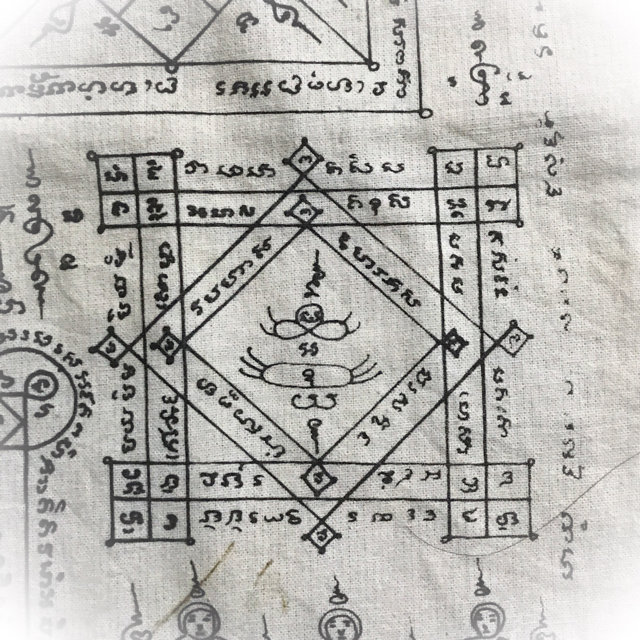 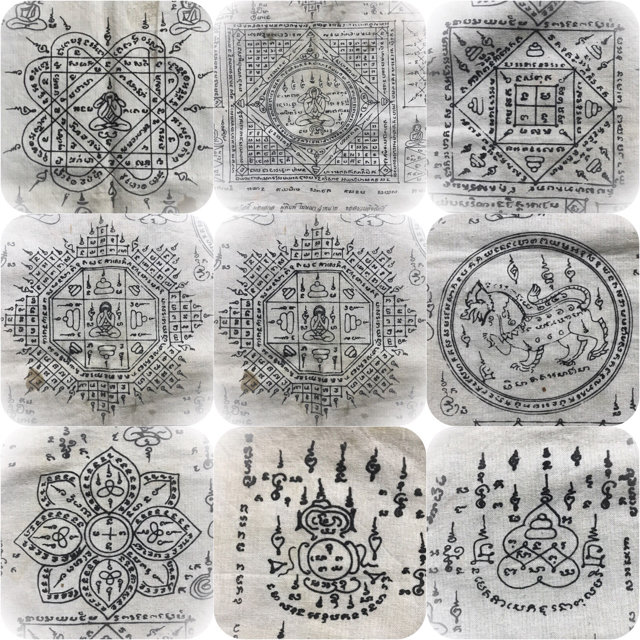