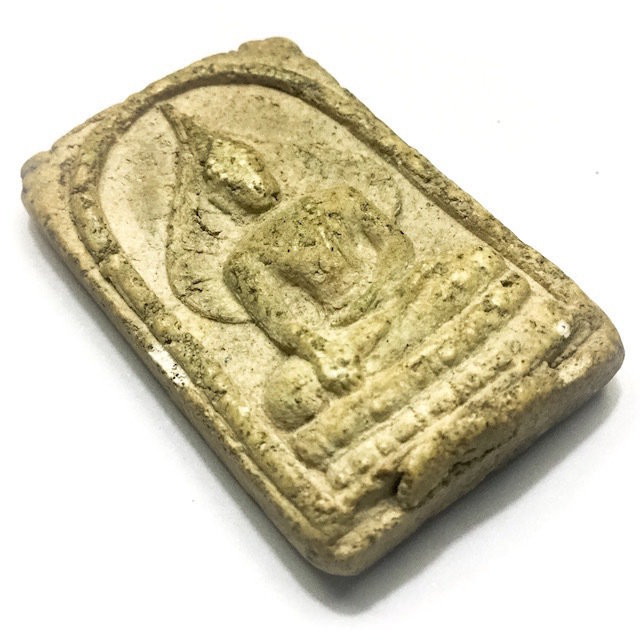 Pra Somdej Putto Nuea Graeng Nuea Pong Wat Rakang Gao Luan Indojin Ceremony 2484 BE by Luang Por Supoj Wat Sutat. A most classic and famous amulet and eminent member of the Dtamra Pra Somdej. The Indo-China war ceremony edition amulets are all without excveption highly regarded Sacred amulets, for having been blessed in what is considered to be the second biggest Amulet Blessing Ceremony in the History of Thai Buddhism.

Luang Por Supoj was one of the Important Gaeji Ajarn Monks of his Era, and a colleague of the other Great Masters of the Royal Bangkokian Temples of Wat Sutat, Wat Rakang Kositaram Wat Bang Khun Prohm. He was a close friend and colleague in amulet making with Sangkarach Pae, Luang Phu Nak, and Pra Kroo Lamoon. For his amulets, he was able to receive a generous portion of Muan Sarn Sacred Powders and broken old Pra Somdej Wat Rakang Kositaram of the great Somdej Pra Puttajarn (Dto) Prohmrangsri from Luang Phu Nak. 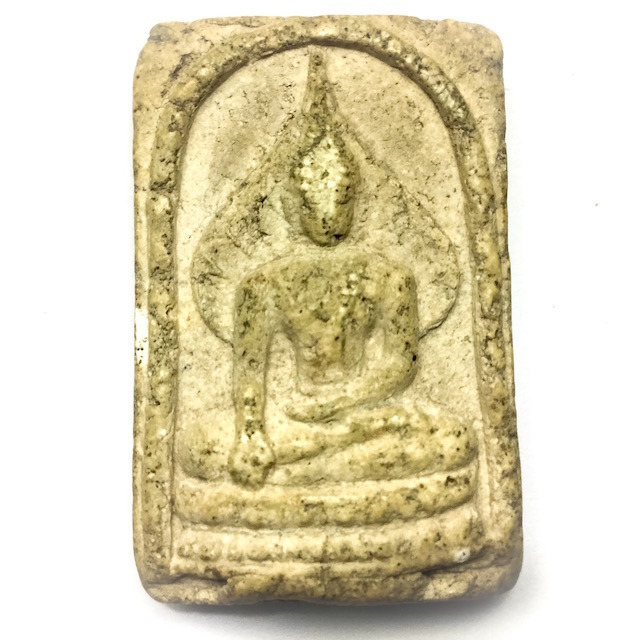 The Buddha is sat in the Mara Wichai posture (Conquering Mara). A Bodhi Leaf is behind the Buddha and tapers upwards to blend with the 'Pra Gaes Mala' Pointed Topknot. The Buddha is framed within a curved arch. The arch on our right, almost touches the edge of the votive tablet on the lower section, and is slightly further inwards on the left side, which is to be noted as one of the points of reference for authentication in this particular block press mold. The left hand of the Buddha has a raised thumb, which almost touches with the 'Prakot Aew' (Monks belt strap)The Buddha's left armpit is slightly deeper and raised higher than the right armpit. The arms of the Buddha are plump, and the chest and shoulders are wide and powerful. The Bodhi Leaf behind the Buddha can be seen to possess detail of the veins of the Bodhi Leaf.

Luang Por Supoj gathered and saved up a large repository of the most powerful powders, and as many Pra Somdej Wat Rakang Kositaram pieces as he could before he made his Muan Sarn Sacred Powders for the amulets he had planned, and other amulets which devotees had brought to him when they broke, and ground them down into the extremely rich and sacred Muan Sarn. 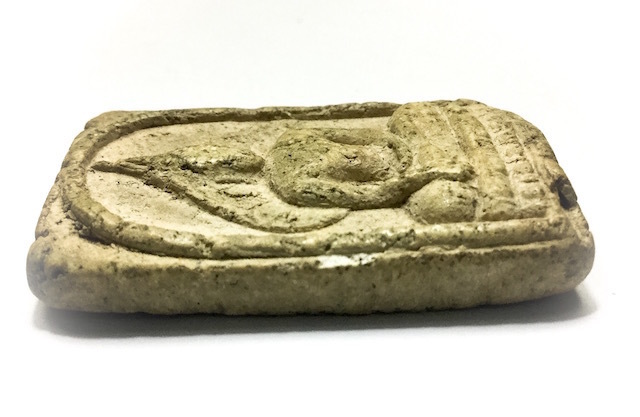 It is the powerful Muan Sarn clay, and the great Indojin (Indo-China Wartime) BBlessing Ceremony that has made his amulets so Important and Sacred from a religious, national, and Historic point of view. The presence of pure Pra Somdej Wat Rakang Kositaram Somdej Pra Puttajarn (Dto) Prohmrangsri in the clay of the amulets is what has made his amulets so highly regarded and famous historical artifacts in the present day, as well as the fact that all amulets blessed in the Piti Indojin Indo-China War Ceremony are considered to be powerful Master-Class amulets. The Piti Indojin Ceremony was considered to be the second biggest and most important amuletBlessing Ceremony in the History of Thai Buddhism.

The Pra Somdej Putto amulet, is a Classic Amulet, of Historic Fame, and an Eminent member of the Dtamra Pra Somdej, and in our opinion stands its ground with many amulets which carry extremely high prices compared to this amulet. Its Sacredness and Miraculous Power should be undoubted, for the fact that it was included in the Great 'Piti Indojin' Blessing Ceremony during the Indo-China Wartime. The Indojin Ceremony was considered to be the one of the 3 Biggest Ever Mass Blessing Ceremonies in all Thai History, along with the Wat racha Bopit and the 25 Putta Satawat Ceremony (2500 Years of Buddhism Celebration). 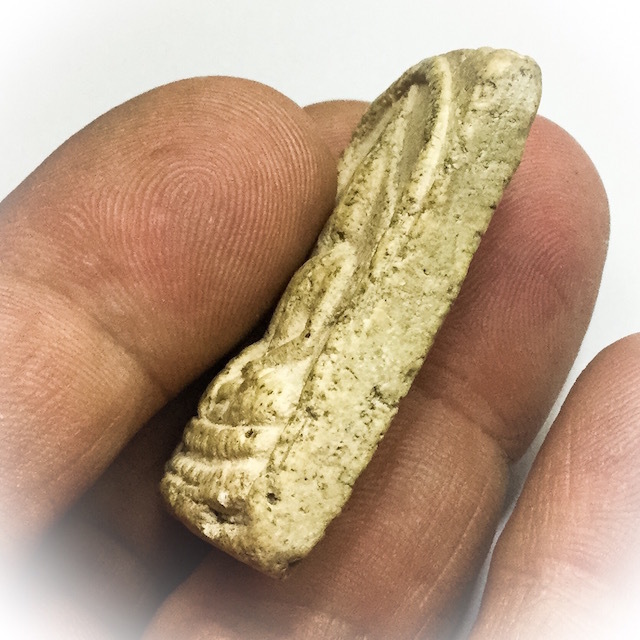 The rear face has clearly visible elements of pieces of Pra Somdej Wat Rakang within the Muan Sarn Clay. The highlight of the Pra Somdej Putto of Luang Por Supoj, is the fact that it is made mostly from a Muan Sarn created from broken up Pra Somdej Wat Rakang Kositaram, from Somdej Pra Puttajarn (Dto) Prohmrangsri, the most powerful and important maker of Pra Somdej amulets of all time, whose amulets are both Miraculous, Impossible to afford, and of the Rarest of all amulets to find anywhere.

The Pra Somdej Putto of Luang Por Supoj is made within the Dtamra of Pra Somdej which includes only a small number of Pra Somdej makers/temples in official status. and Belongs to the Pra Niyom Preferred Category of Sacred Pra Somdej Amulets within the Legend of Pra Somdej. The front face of the amulet features the Buddha seated on a double Lotus Dais (Thaan Bua Glab - 'Bua' meaning 'lotus' and 'Glab' meaning 'reversed'). 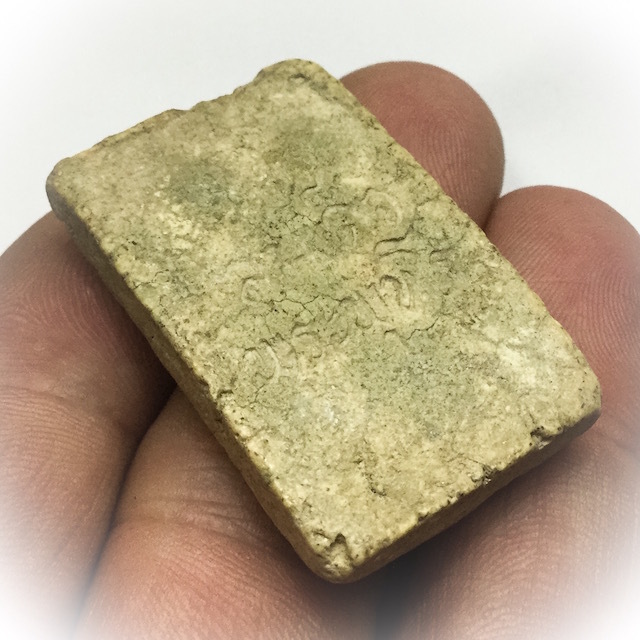 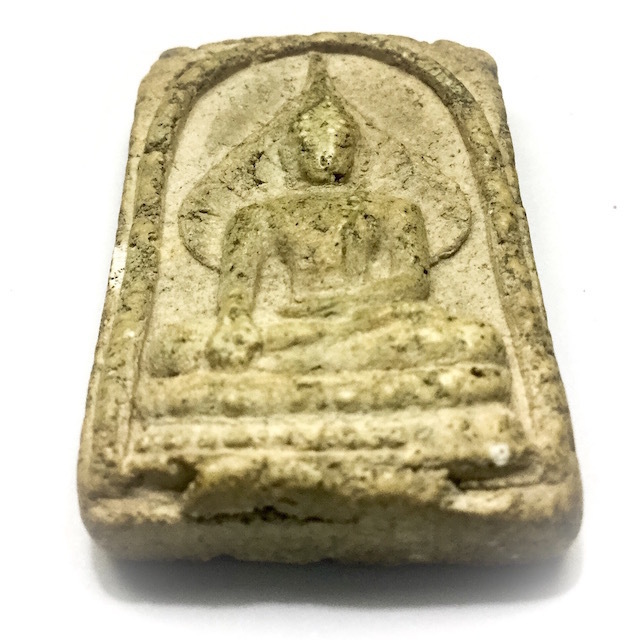 A close look here from the side view, reveals incredible similarity with the appearance of the Muan sarn of Pra Somdej Wat Rakang Kositaram Somdej Pra Puttajarn (Dto) Prohmrangsri. The Muan Sarn content is identical with the tiny black dots which are from various substances which were added by Somdej Pra Puttajarn (Dto) Prohmrangsri into his Pra Somdej, which include black Bailan Parchment Powder Soot, Banana Seeds, and Pratat Relics. The dense and hardened edges of the rim of the raised arch (Sum), are also highly reminiscent of the Pra Somdej Wat Rakang Kositaram amulet, with a wrinkly but shiny looking hardened surface, resembles a marbled effect. 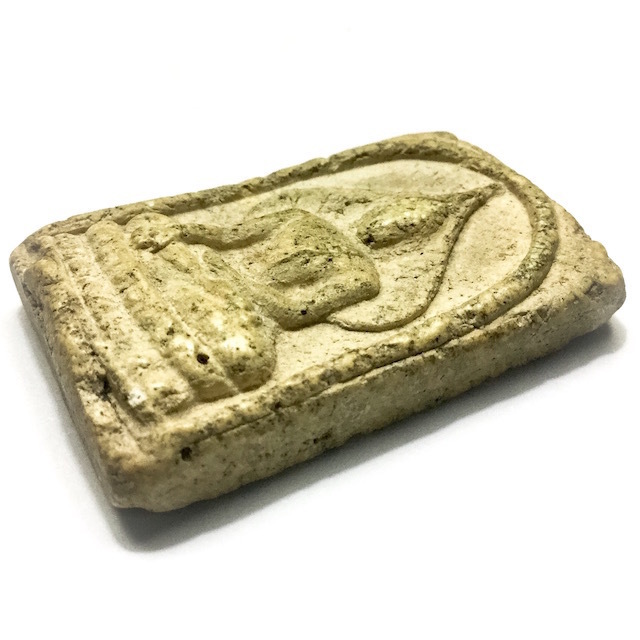 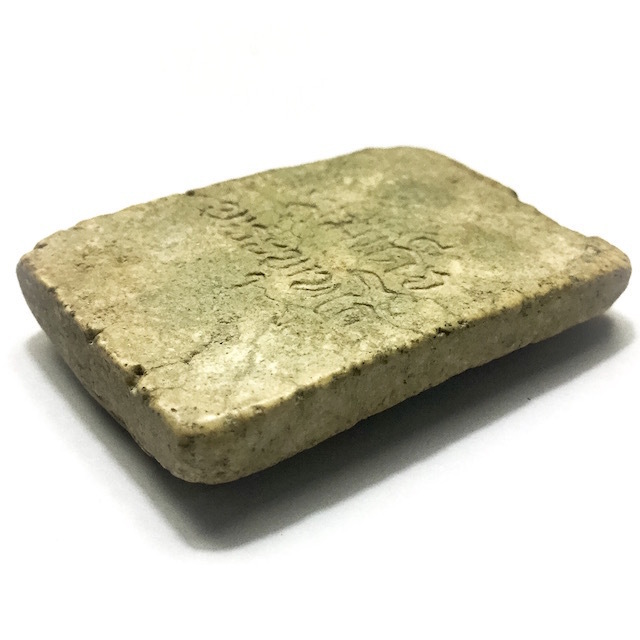 Other ingredients used to make the Pra Somdej Putto support the study and appreciation of the Dtamra Pra Somdej Wat Rakang Kositaram, with the inclusion of broken amulets from the other Great Members of the Dtamra, including broken pieces of Pra Somdej of the Great Somdej Pra Sangkarach (Pae), and Luang Por Jao Khun Sri (Sonti, and Jao Khun Tip Gosa, who were foregoing Masters of of Wat Sutat, and Colleagues of the great Somdej Pra Puttajarn (Dto) Prohmrangsri. 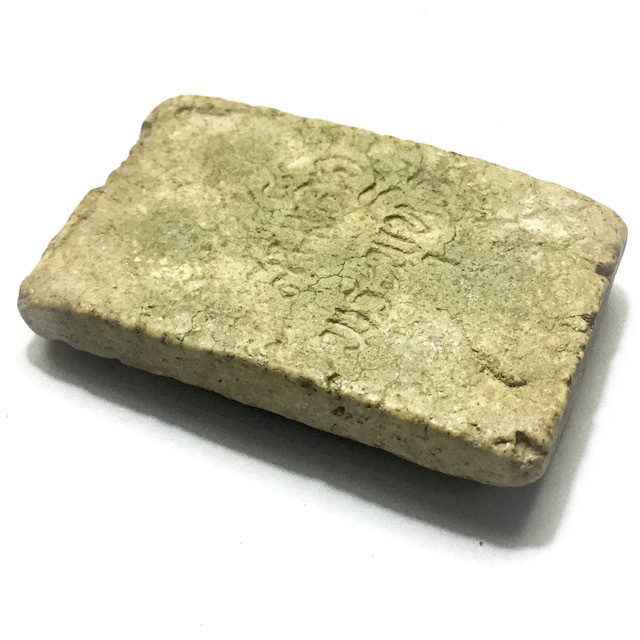 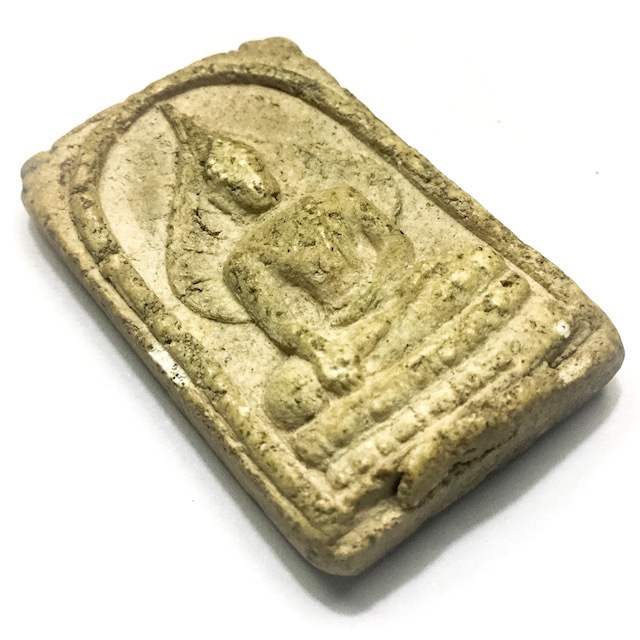