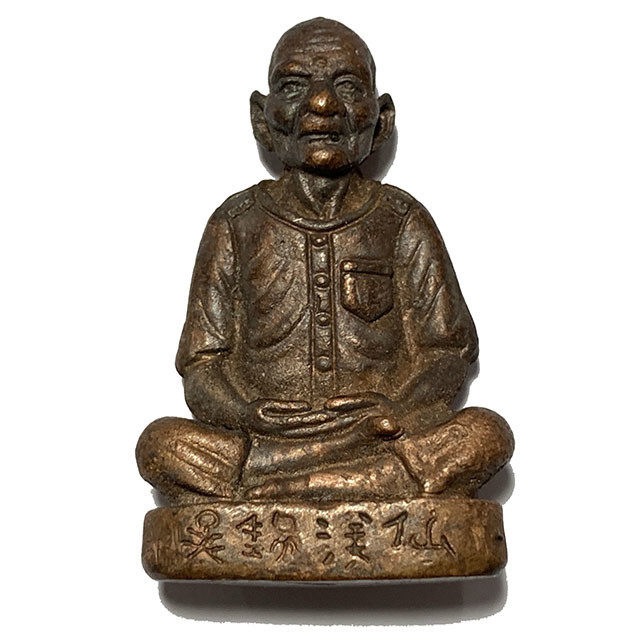 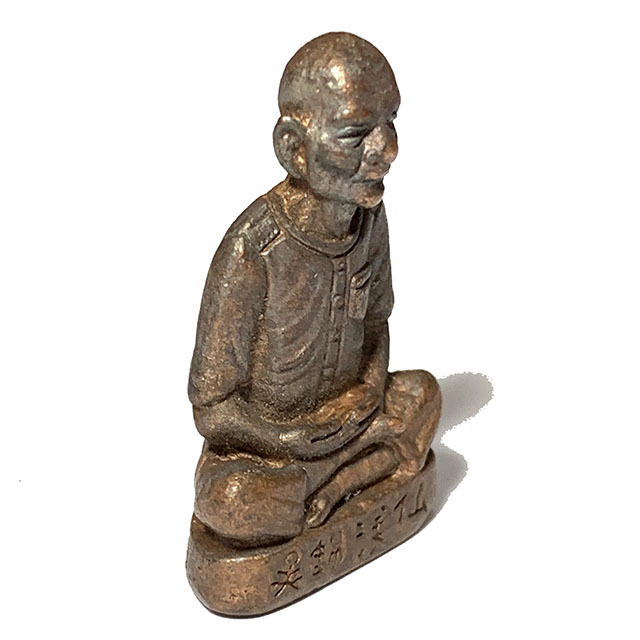 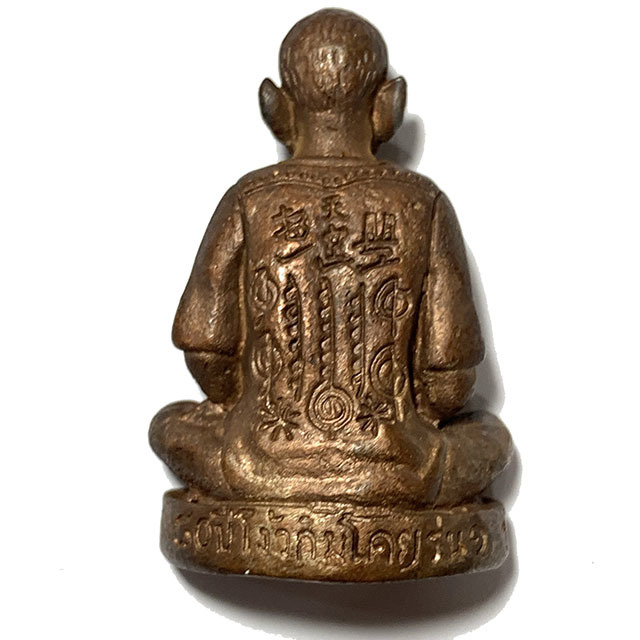 The Pha Yant Fa Pratan Porn of Ajarn Ngow Gim Koy (Sian Ah Pae), is world famous for its Puttakun Maha Mongkol power to bring auspicious fortune and great blessings, preventing bad horoscope, and improving the line of fate. It balances out the aspects of Feng Shui science and helps to evade bad luck and attract good luck.Most devotees, of Sian Ah Pae will have a Pha Yant, and an image of Sian Ah Pae to Pray to in combination, be it a photograph as an amulet or framed on the wall, or a Bucha statue or Loi Ongk Statuette, along with the Pha Yant. 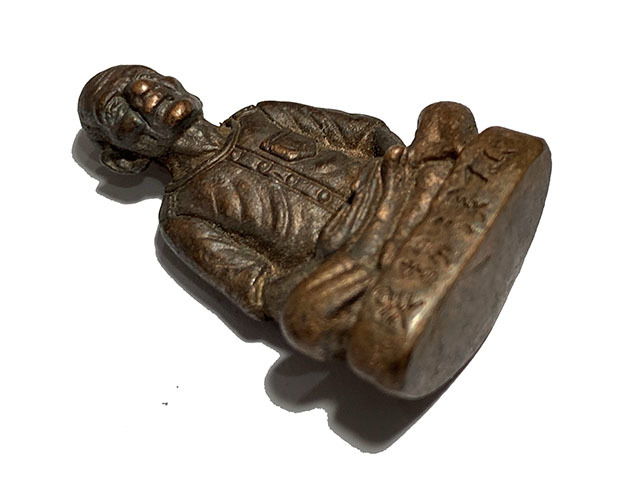 However, it is said that merely to pray to the image of Ah Pae Rong Si, even an unblessed one, should bring great fortunes and remove obstacles from one's life. For the image itself is an assistant in building a spiritual connection between the Guru and the Devotee, and a line along which the magically auspicious blessings can be transmitted from Guru to Devotee.

For Posterity, one should inform that Sian Ah Pae passed this Wicha on to Lay Master Ajarn Hmor Somsukh Kong Urai, who is the living Wicha Holder of the Lineage Continuance of Sian Ah Pae Rong Si, and can be considered a Kroo Ba Ajarn continuance of the Wicha, and who is the direct receiver of the Wicha able to perform it properly, through Lineage transmission from his Kroo ba Ajarn Sian Ah Pae Rong Si. We hence recommend any amulets you may see from this lineage continuance Lay master 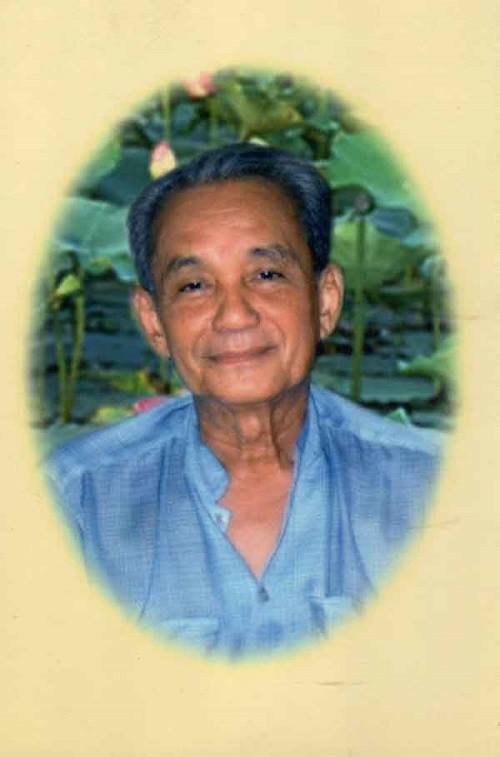 1 Ga design for self advancement, lucky fortunes, remove obstacles in profession and social life, improve health wealth and happiness. 2 Ga designs for Beauty Care, Hair Stylists Shops or 'Love Inn' type hotel service establishments. 3 Ga designs on one cloth for Anti Black Magick, in places where spirits and magick is rife, or for homes which have a bothersome ghost (to do with Dark Energy). 4 Ga would be for Hotels, Tourist Attractions and Restaurants (recommended to use in conjunction with 9 Ga cloth). 5 Ga on one cloth would be for Tutors, Schools in Construction, Sangha Dhana shops, and shops that sell books or reading and writing equipment (to do with Knowledge). 6 Ga on one cloth is similar to 4 Ga, good for Fancy Hotels, Gift Shops, Art and other Beautiful items, and Beauty Salons (to do with Aesthetics). 7 Ga is for Clinics, Dentists, and Spare Parts or replacement traders to improve their Business (to do with repairs or replacements).....(continued below image) 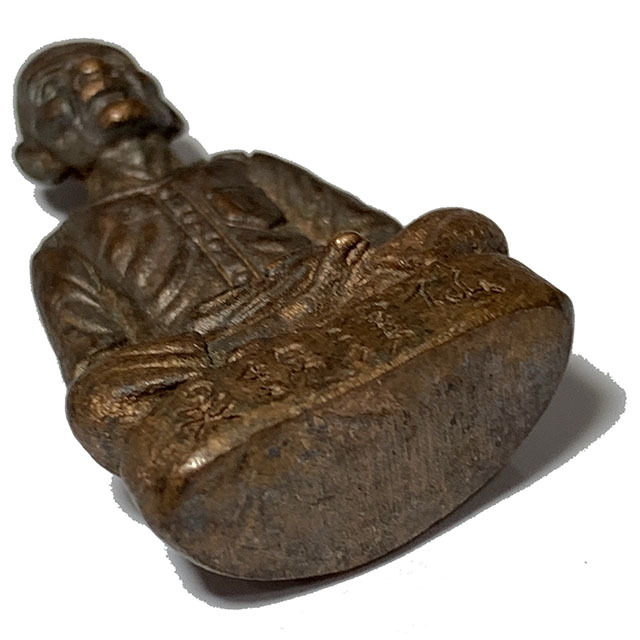 8 Ga on one cloth for Bars and Restaurants, Soldiers, Police and Civil Servants, to increase Baramee Amnaj, making it easy to command employees or lower ranking officers, filling their hearts with fearful respect. 9 Ga cloths would be for Sangha Dhana religous offerings shops, and businesses which sell electrical or other types of household appliances. 9 Ga designs is also used in conjunction with 4 Ga for Hotels and Service Industry establishments, which have Information Desks, Public Relations and Communications (to do with Communication and Understanding). 10, and 18 Ga designs on one cloth are both for Prosperity and Happy Life in the Home 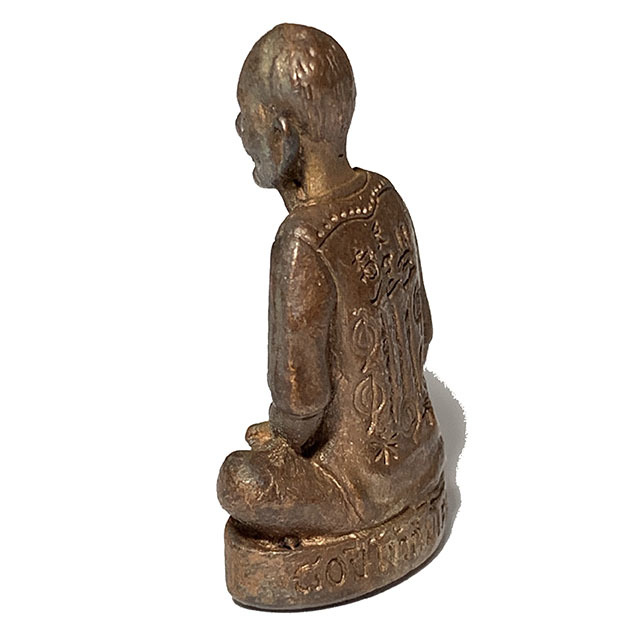 Ajarn Gnow Kim Koy, or, better known as 'Sian Ah Pae Rong Si', was a laymaster of Chinese Ethnic origin who was highly respected by Thai Devotees of the Pathum Thani district, who has many thousands of Looksit, for his ability to indicate Huang Jui (Feng Shui), to remove obstacles and increase auspicious horoscope. The Devotees of Sian Pae had great luck with his readings and recommendations, and the changes his advice brought to their lives was enough to make him legendary in the Province. 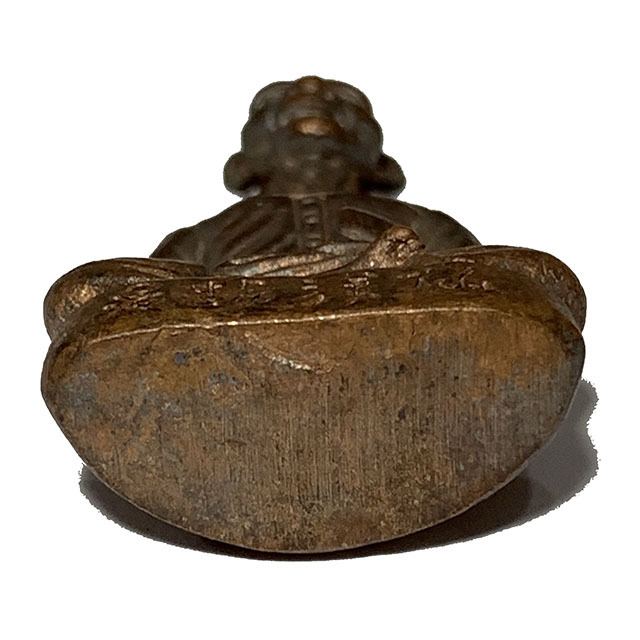 This is an Extremely rare and highly sought after item of this master as indeed are all original amulets of this Lay Master of Yesteryear. This master was lovingly known as 'Pae Rong Si' and was so loved by the local Folk of Patum Thani for his tirelessness in assisting the locals with their ailments, financial difficulties, and in helping to change their luck around, from bad to good. 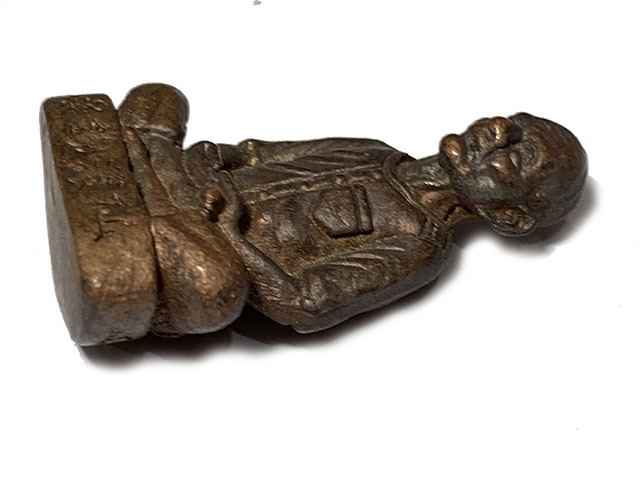 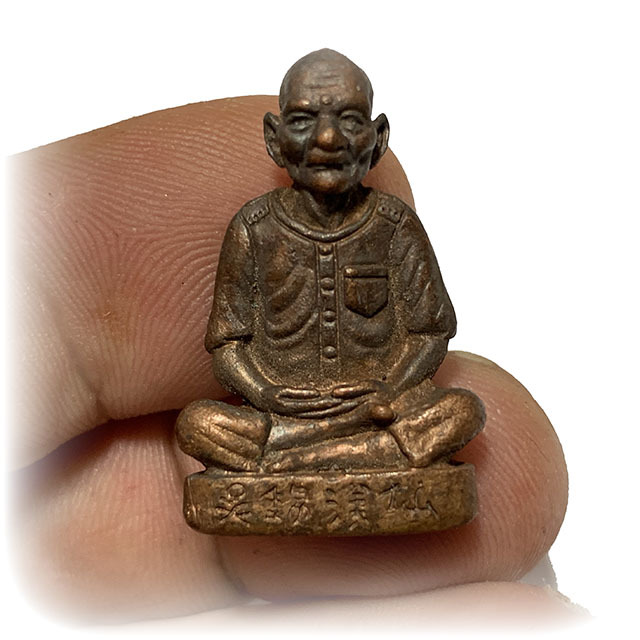 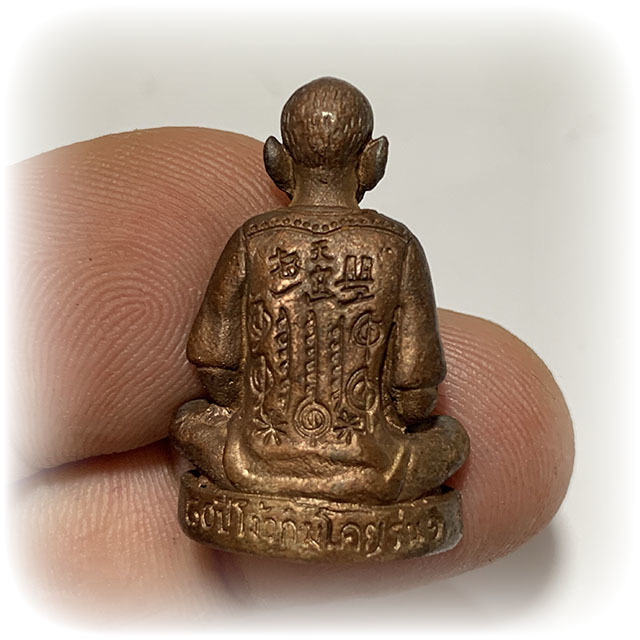 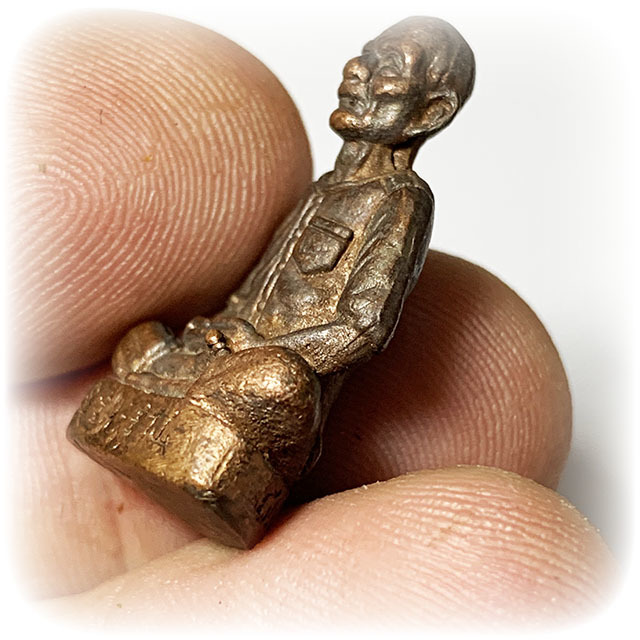 The life and biography of Ajarn Ah Pae before he appeared at the San Jao Shrine of Patum Thani is mostly a mystery, for he was a Chinese Immigrant who moved from Mainland China, and little is known of his life before he came to Thailand. Both Ajarn Ah Pae and his amulets enjoy Legendary status in Thailand and with Thai Chinese People especially, as well as being highly revered in foreign shores by the Chinese devotees in Malaysia, Singapore, Indonesia, Hong Kong, China and Taiwan. 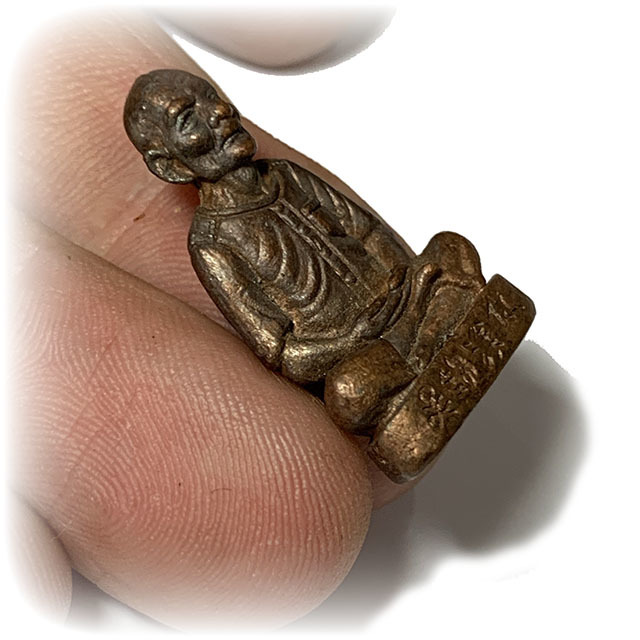 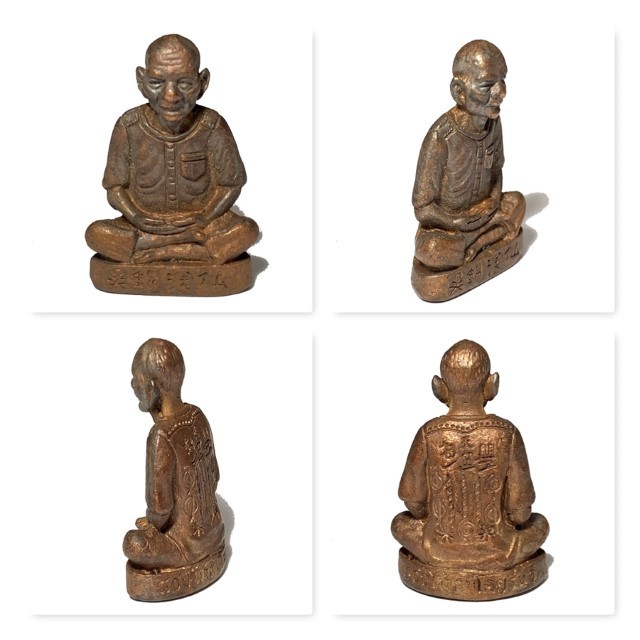