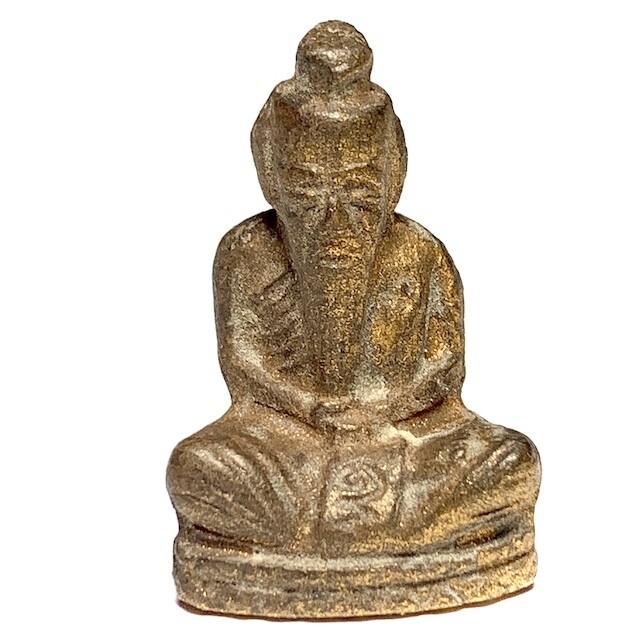 A very rare Pim indeed, a Loi Ongk Roop Lor Sacred Powder Statuette of the Ruesi Por Gae Dta Fai in meditative posture, made from Nuea Dam Black Plai Dam Powders mixed with pure concentrated Pong Prai Kumarn Powders with the Yant Grabong Khwai on rear face, Code U on the Lap, and hand inscriptions on the base, from the Great Luang Phu Tim, of Wat Laharn Rai. The amulet has been pressed with Nam Man Pra Jao Thaksin and given a Sai Rae Tong Kam Gold Flake embedding. Por Gae Ruesi, is a highly revered Thai 'Lersi' Deity of Ancient Renown. There are many Legends about many different Lersi. One of the Lersi to be found so often mentioned in Thai Mythology, is Por Gae Lersi Thai Fai (Sometimes spelled “Pho Kae Ta Fai”). 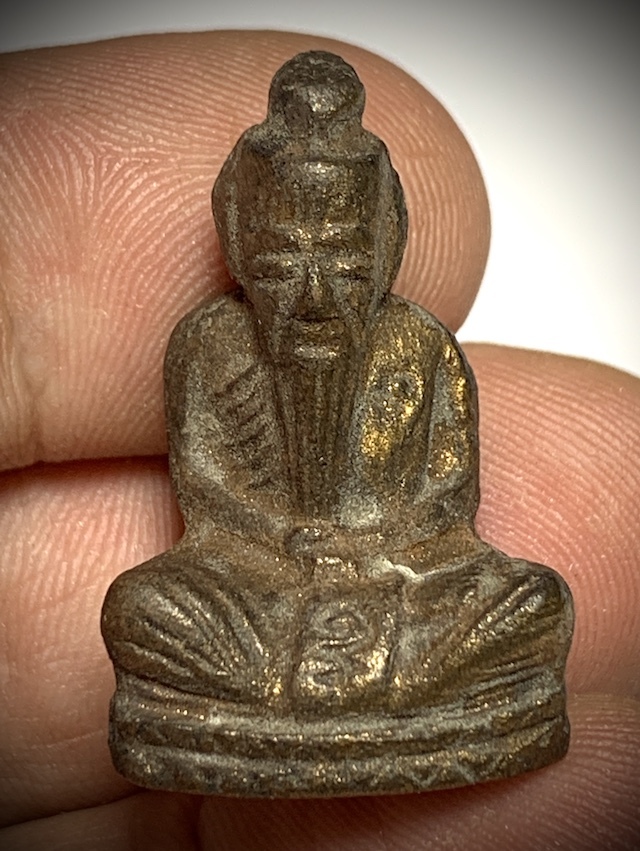 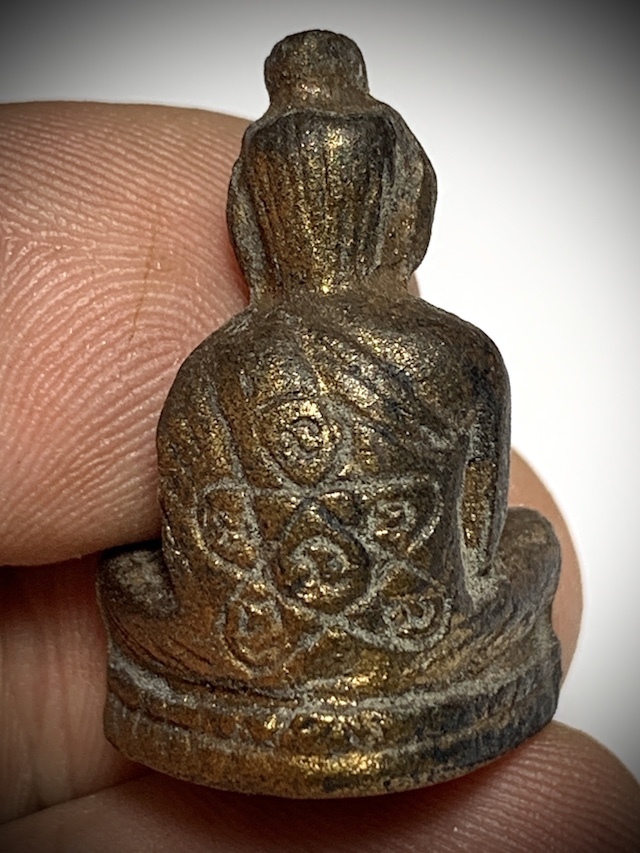 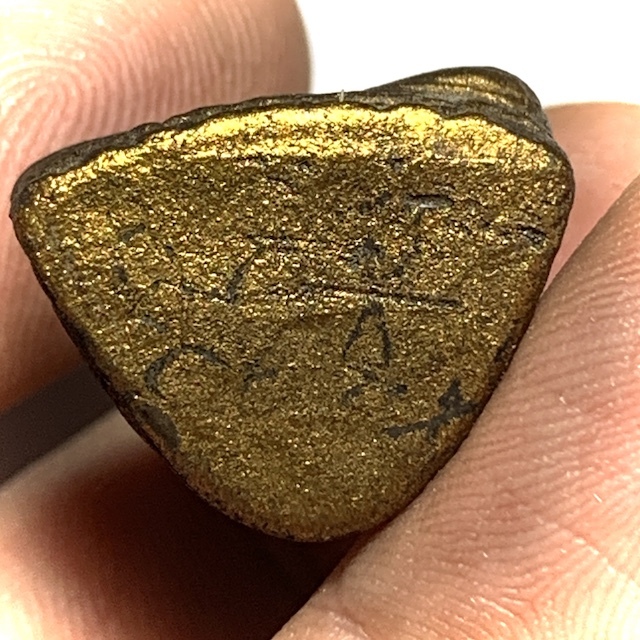 Luang Phu Tim Issarigō, was the most famous maker of Pra Khun Phaen Pong Prai Kumarn of all time, and will most probably hold this status of number one master of the Wicha of making and empowering Pong Prai Kumarn Child Hoeng Prai Ghost Bone Powder Magical Muan Sarn Substance, and invoking the Power of the Mother band Child Hoeng Prai Ghosts to iinhabit the amulets through his reanimation spells. Luang Phu Tim Isarago, is of course not only one of the most highly acclaimed and sought after Guru Monks for his amulets, he is the holder of the highest esteem in Thai Buddhist amulet history for Pong Prai Kumarn powders. Luang Phu Tim, is Internationally Acclaimed, for his famous Pra Khun Phaen Pong Prai Kumarn, and Look Om powder balls. As to the classic 'Rian Guru Monk Image amulets which have become all time favourites, and eternally, world famous classic amulets of the high end variety. Buddhist monk coins with his image and others with Buddha images and other deities and imagery are amongst the most highly collected amulets and most expensive of all of the great Luang Phu Tim. He has various direct lineage apprentices, Who are continuing to progress and spread his most powerful and world-famous Wicha. 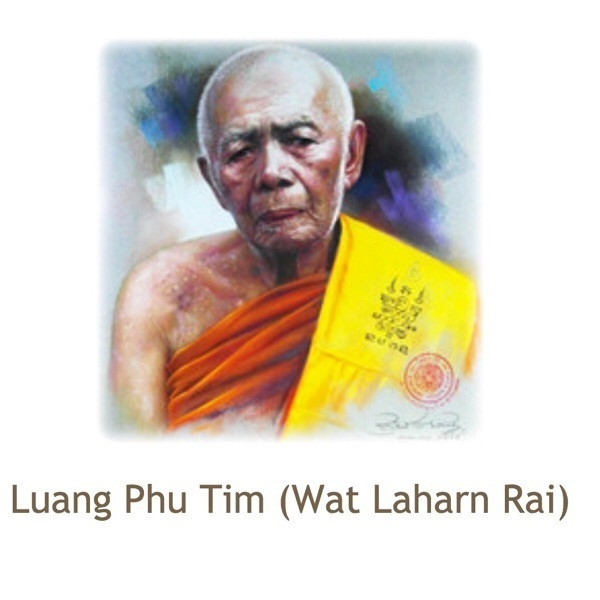 The Lersi, or also known as 'Ruesi', are the holders of the Great Kampira Grimoires, and Magical Wicha of the Dtamra Saiywaet, and are the Root Guru Masters of the Magical Tradition in Buddhist Thailand. Lersi Deva Hermit Gods are Revered in Thailand under the Name 'Por Gae'. Por Gae defends these 'Wicha' etheral knowledges from both the ignorant who wish to destroy them, as well as the ignorant not ready to learn them. This Lersi commands respect and gives knowledge to those ready to accept the power that comes with the Lersi Path. Worshipping the Ruesi brings a full range of blessings and protective magic of the Boroma Kroo and the Immense Power and Protection of the 108 Ruesi Hermit Sages. Kong Grapan, Klaew Kaad, Gae Aathan, Gan Kun Sai, Choke Lap, Kaa Khaay, Metta Mahaniyom, Serm Duang, Maha Sanaeh.

All of these blessings are given with the practice of revering and following the Ruesi Devas. It requires somewhat more effort to practice revering the Ruesi, than to wear an amulet, because the practice of Revering Ruesi is a regular applied practice and you must think that the Ruesi are always with you, and that one lives and behaves as a Looksit of the Ruesi Boroma Kroo Por Gae. To Bucha the Ruesi brings Protection from physical and magical dangers (black magic) had Kong Grapan, Maha Ud and Klaew Klaad Properties. Gae Aathan (remove Black Magic), Gan Phii (scare Ghosts away), Metta Mahaniyom (great preference and popularity), Maha Sanaeh (charm and hypnotic effect, attraction to the opposite sex). Serm Duang (invoke an auspicious fate and destiny, horoscope).

Made from precisely the same Muan Sarn Sacred Powders concentrate as the Look Om Pong Prai Kumarn of Luang Phu Tim, and hence as powerful in its physical composition of magical substance, and empowered with not only the invocations of the 108 Ruesi Sages, but also the Prai Hian Power of the Hoeng Prai and Kumarn Tong Ghosts imbued within the powders. The making of the Muan Sarn Sacred Powders of Pong Prai Kumarn created by Luang Phu Tim, came from the Wicha which Luang Phu had inherited through apprenticeship form one of his high Kroo Ba Ajarn, Kroo Ba Sangkh Tao, who was also his true Uncle. 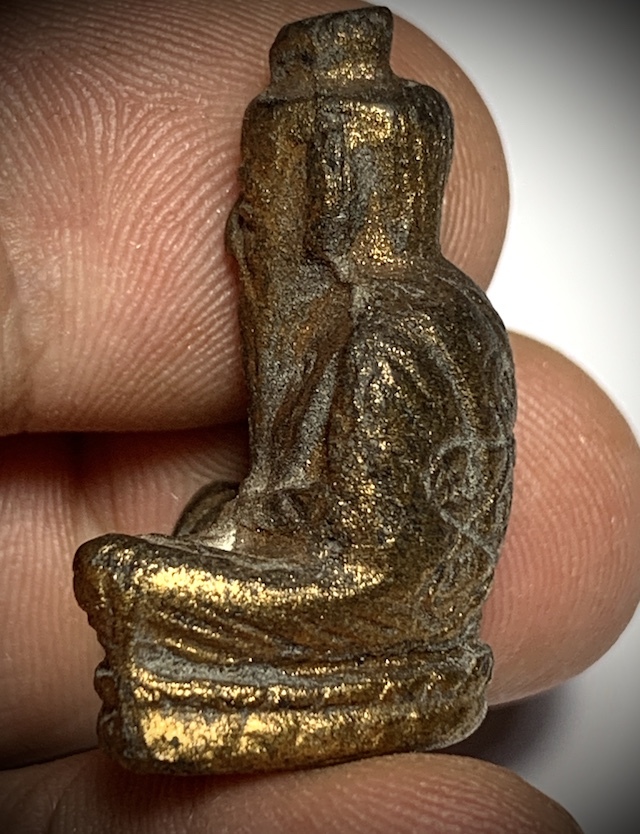 Part of the formula included Pong Prai Maha Phuudt, which was made from the Skull of a male Kumarn who died in the Womb, and who died on a Saturday and was cremated on a Tuesday. This is part of the ancient Khmer Necromantic Formula for Authentic Powerful Prai Occult Magic, as practiced in Ancient Times.

Due to the fact that Monks are not allowed to seek and find this Sacred and Extremely Powerful Necromantic Substance, Luang Phu would perform Korb Kroo Initiation for protection against Black Magic and the Phūdtā Spirit Phantoms, so they could go forth, to seek and find the substances to donate to him for the making of the Pong Prai Kumarn.

Closeup macro images of the Muan Sarn Sacred Powders and surface textures reveal the presence of authentic Pong Prai Kumarn within the Muan Sarn Clay, rising to the surface. 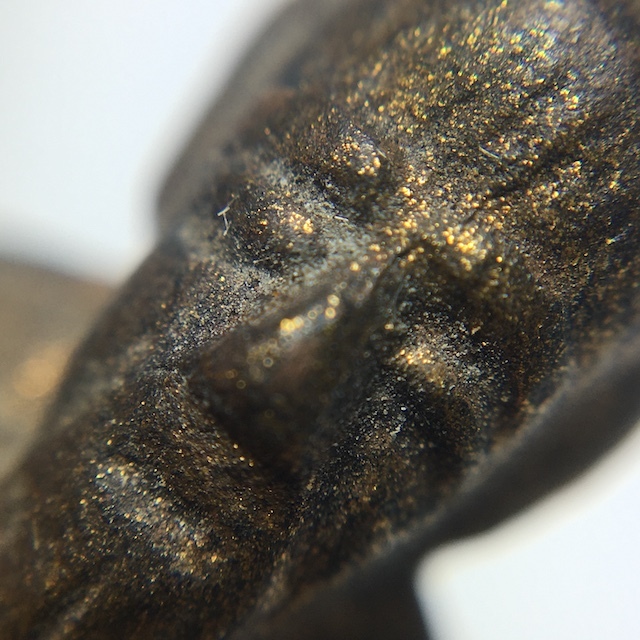 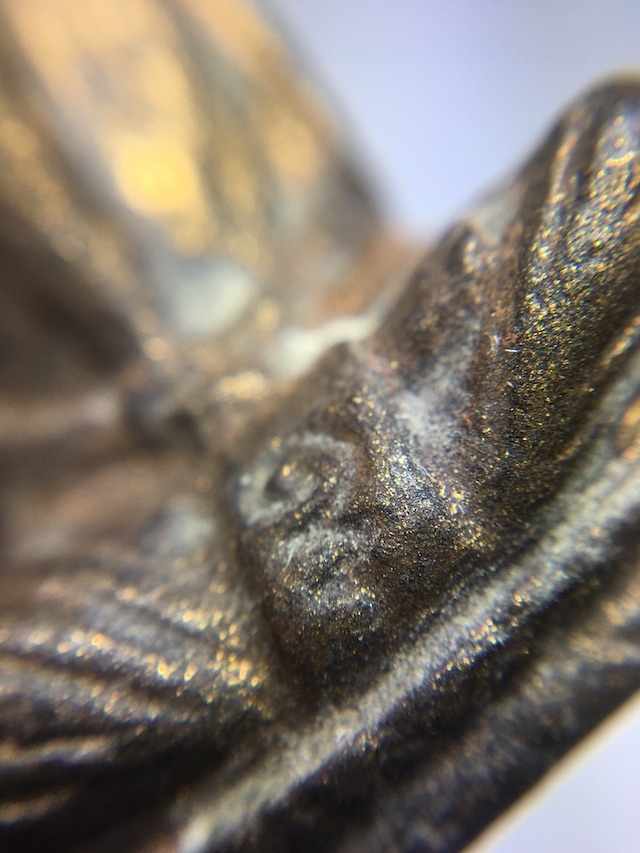 They would receive the ceremonial ritual liberation of their souls from Luang Phu Tim, who would speak with the spirits of the dead to receive their acknowledgement for the process of transformation through the Nibbana Sutra, and the Muan Sarn would then be prepared according to the Dtamra Saiyasart of Necromancy, to make the Pong Prai Kumarn. Since his passing, his devotees and apprenticed monks, have now become the world's top living masters for the making of Pra Khun Phaen Pong Pra Kumarn, and literally dozens of encyclopaedic books, have been printed, documenting both this great master monk, and his classic amulets of high esteem. 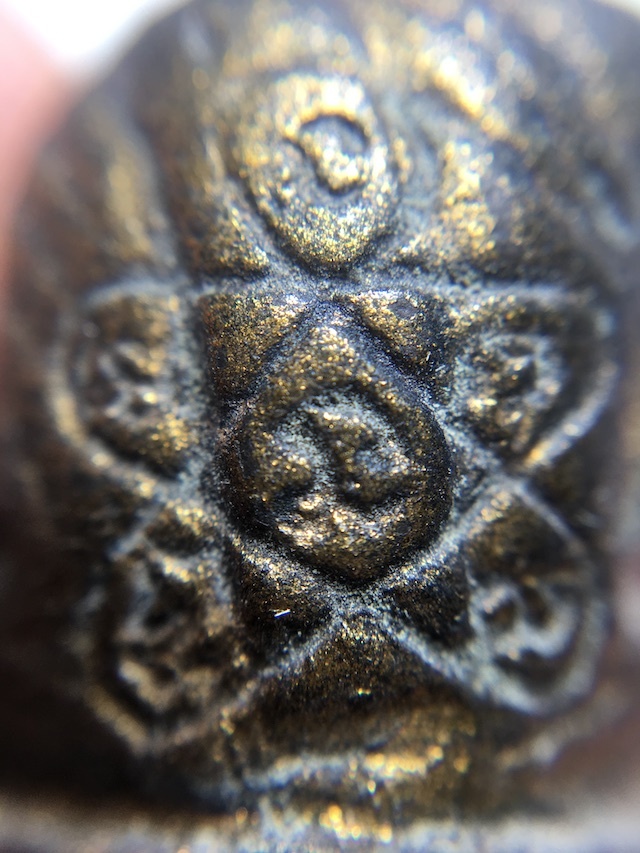 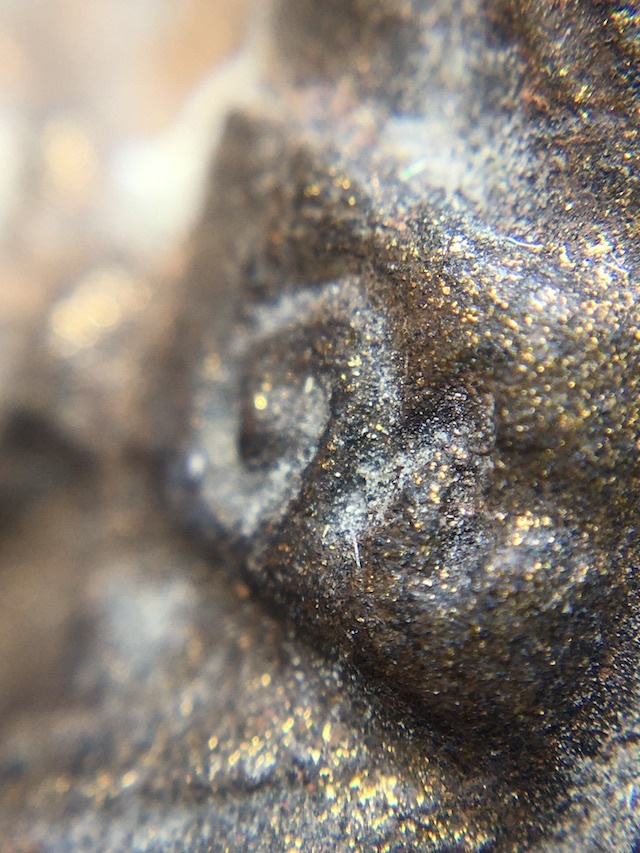 Below; hand inscriptions visible on the base of the Loi Ongk Statuette 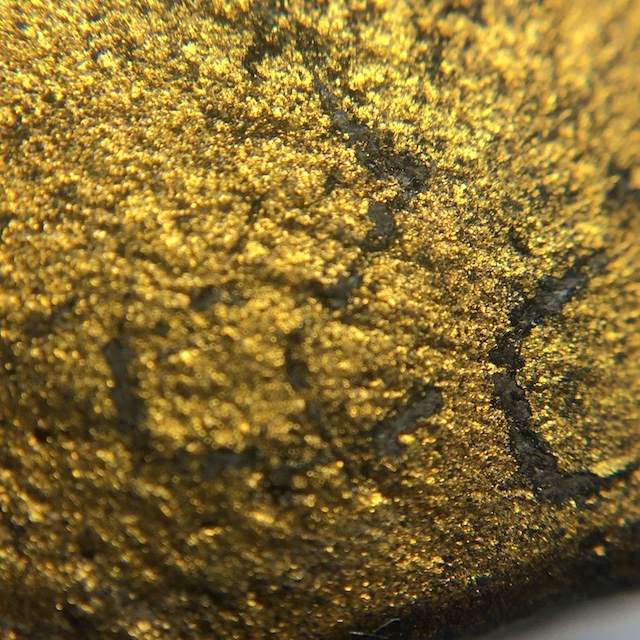 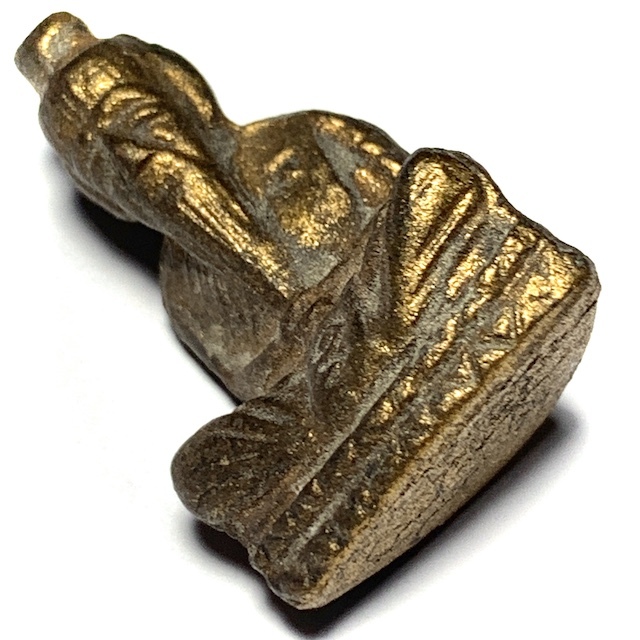 For students who wish to begin serious collectorship of amulets of Luang Phu, we recommend to begin with the lower priced items, as the most affordable way to obtain an authentic study material, and to train the eyes, as to the appearance of the Muan Sarn, and Surface textures of his other Classics. Studying a lesser priced amulet of same age and substance, is a perfect and affordable way, to train oneself in recognizing the authentic amulet, before risking thousands and tens of thousands of dollars on a Pra Khun Phaen Pong Prai Kumarn Luang Phu Tim. 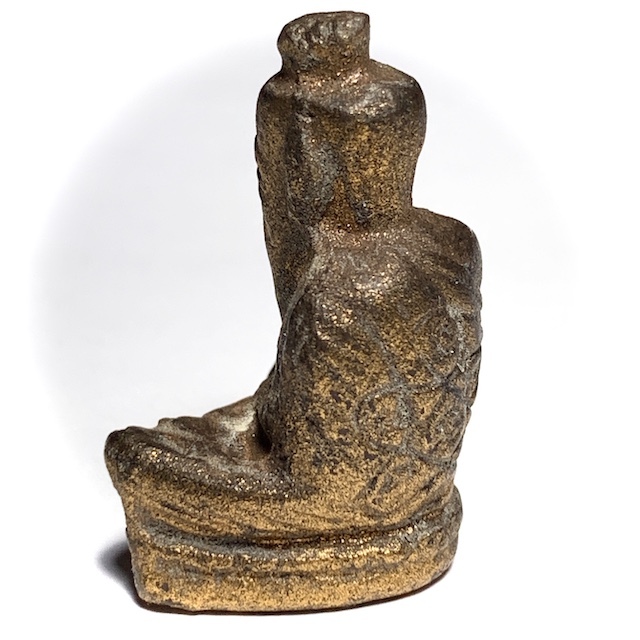 The amulet is also therefore, a perfect 'Ongk Kroo' reference study material, for students of the Pantheon, and will increase your chances of spotting an essential rarity at the right price, and without danger of risking a fakery. A highly attractive and rare Sacred Amulet, that is truly Powerful and stands as the Master Class Amulet of its Category, and is considered a Most Highly Prized addition to any Luang Phu Tim amulet Collector's Showcase, and more importantly, The Ruesi Pong Prai Kumarn Loi Ongk Statuette amulet, is a most powerful amulet to possess for Bucha, and receive its Blessings, which History has proved time and time again to be one of the most powerful and famous amulets in Thai Amulet History.

Katas for Revering the Ruesi

Various Kata (general and specialized) for praying to the Ruesi, and empowering your Ruesi amulets, Por Gae Masks and Statues

It should be noted that to correctly Bucha Ruesi Deities, one should also have Korb Kroo ceremony performed on you in order to receive protection and lineage of the Ruesi Masters. 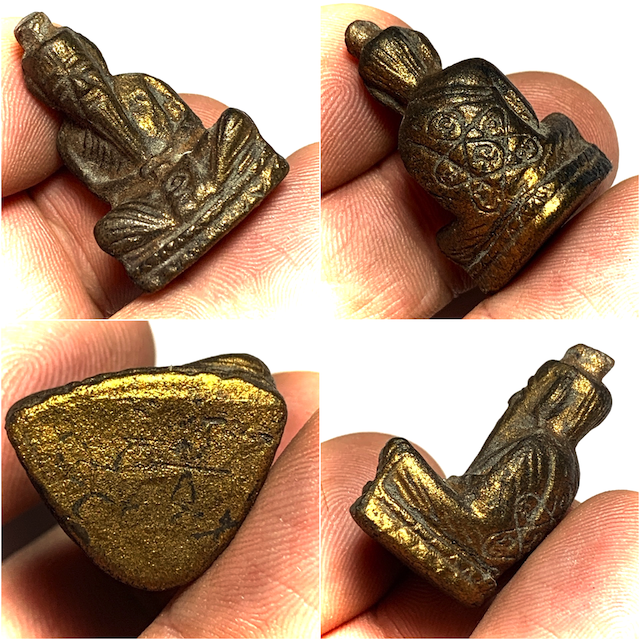