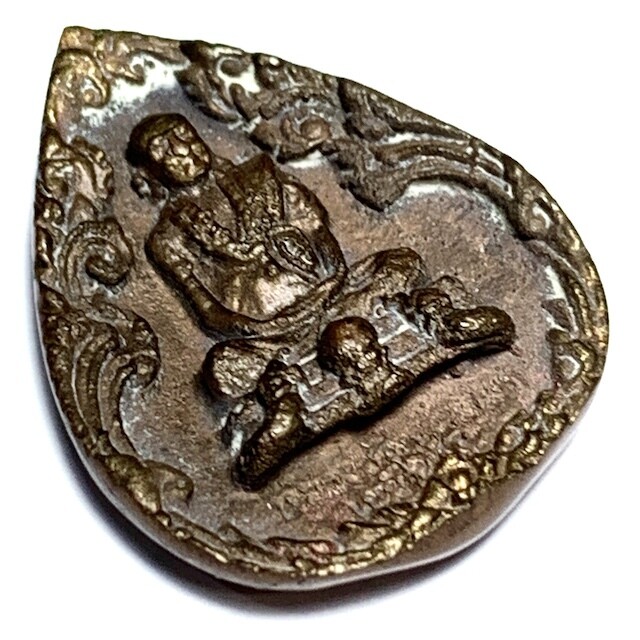 Rian Lor Yod Nam in Nuea Tong Samrit copper and bronze based Sacred Chanuan metals, from the year 2538 BE, from Luang Phu Prohmma, of Wat Suan Himapant Nang Koi, in Ubon Rachatani. This edition, is along with all amulets of Luang Phu Prohmma, extremely rare and highly regarded, and sought after by the devotees of Luang Phu Prohmma, and those seeking Kong Grapan Chadtri Maha Ud Klaew Klaad power of Invincibility, Evasion and Protection. 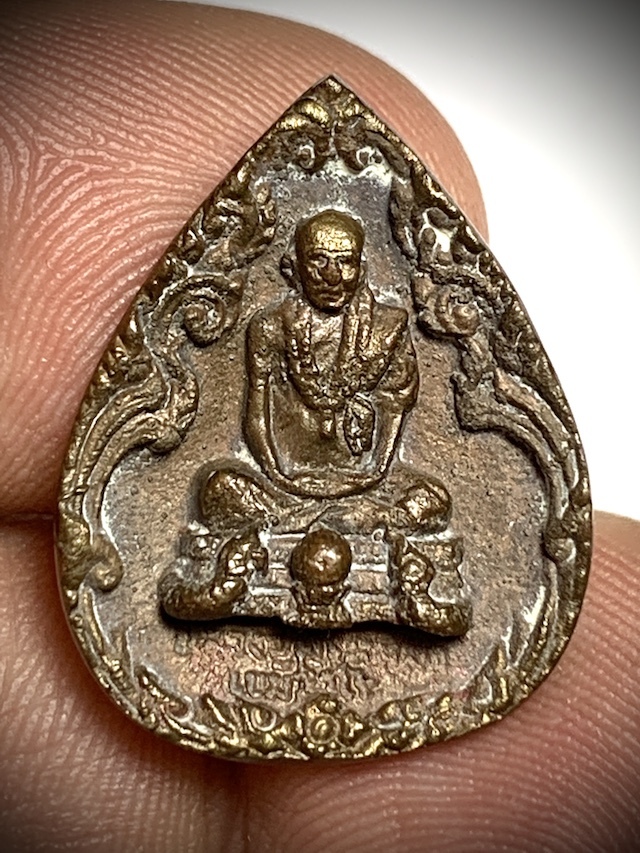 The amulet is formed in 'Yod Nam' waterdrop shape, with the image of Luang Phu Prohmma seated within a flamed Granok decorative arch. The rear face has Sacred inscriptions, with the number 99, and name of the temple, and province embossed. Made during the 99th year and released in Buddha Abhiseka ceremony in 2538 for the Roi Pi 100th Anniversary Wai Kroo Edition. 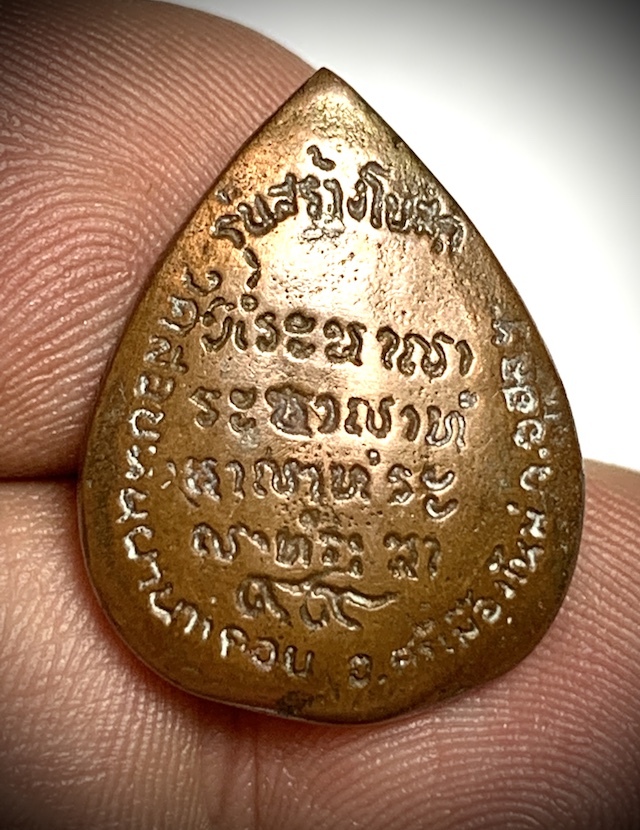 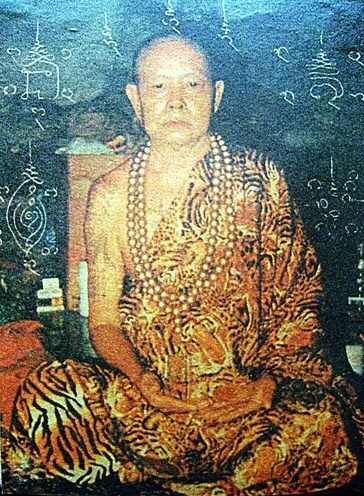 Luang Phu Prohmma of Wat Suan Himapant Nang Koi (Ubon Rachatani), was one of Thailand's Most Historically Famous Gaeji Ajarn Master Monks of the Isan region. He ordained as a Samanera at the age of 12, and learned how to make Buddha Magic at this ripe young age with Somdej Lun, a Khmer Master of Jampa Sak. 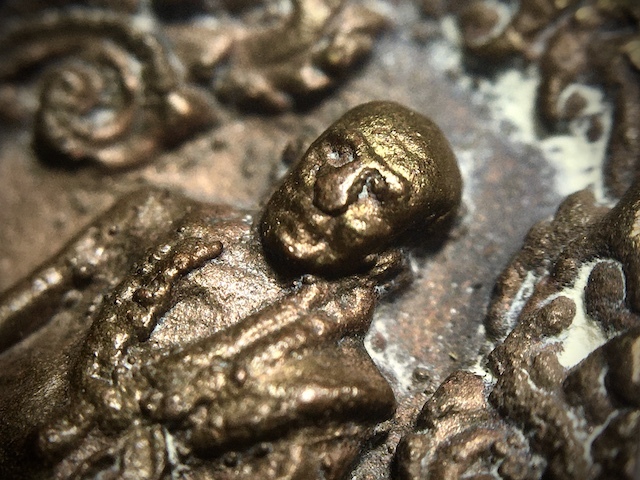 He studied for 6 years under this Master, who passed away at this point. After the death of his teacher in Buddha Magic, Luang Por Prohm wandered around the country in Tudong practice (aimpless wandering of an ascetic). It was during this time that Luang Phu Prohmma was able to meet and study under the great Arahant Luang Phu Mun Puratto. 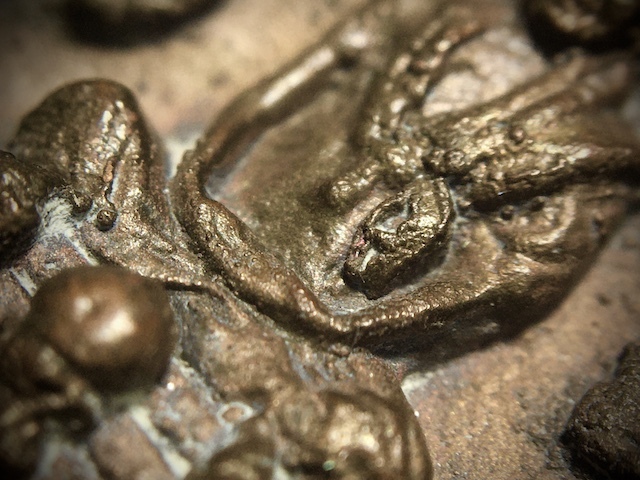 After studying with Luang Phu Mun, LP Prohmma then went to live in a Cave on the peak of a mountain called Khao Kway, and he remained here practicing in solitary for a period of 45 years. After this, he crossed the border into Thailand in the year 2533, where he went to stay in a cave where he had noticed that many wild animals would come and cross paths and coexist together. He stayed in this cave practicing, and his merits and renunciation became so well known, that even Somdej Prataep Radtana Rachasuda Siam Boroma Rachachonanee (the Royal Princess), travelled twice to pay reverence and offerings to Luang Phu Prohmma. 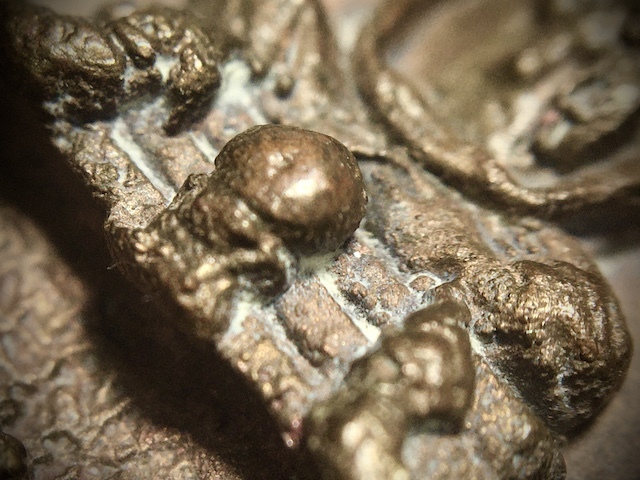 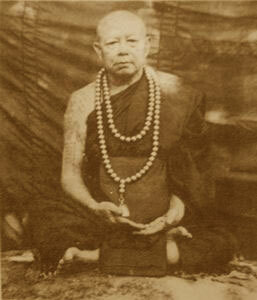 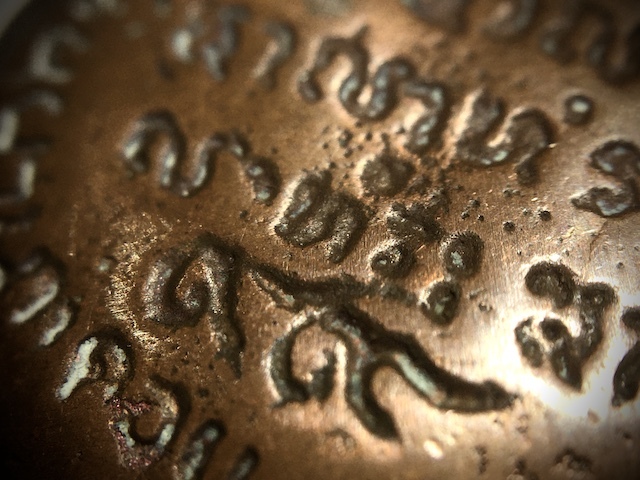 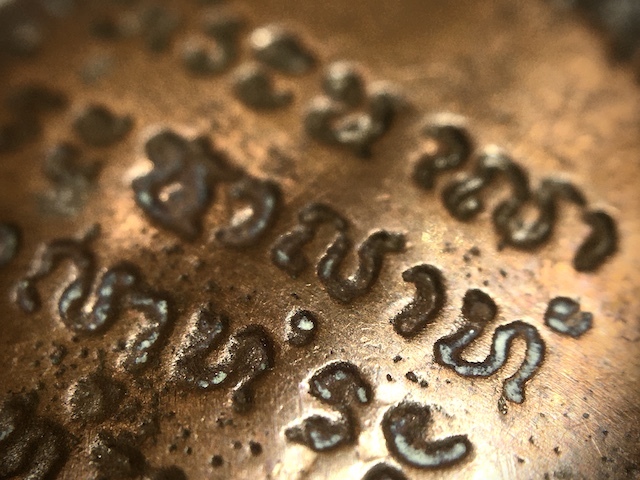 Luang Phu Prohmma's amulets are of high credibility, authentic power, and fine quality craftsmanship. LP Prohmma is known to make extremely powerful amulets, and especially his Pra Lersi Hermit God amulets, and this is due to the fact that, as he was wandering on Tudong, he learned Wicha from a Lersi who was living in the forest. 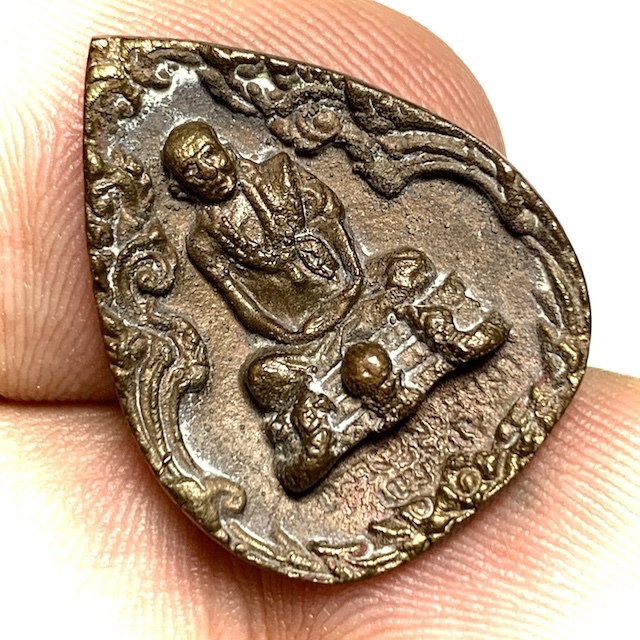 This was part of what caused LP Prohmma to be inclined to make so many tens of famous editions of Lersi amulets (for it is the Lersi for which he is famous in the amulet world) Most editions of his Lersi amulets were made from sacred herbal powders and pollens, but because of their brittleness and easy to break, the Devotees began to ask for Lersi amulets as metal coins or statuettes, so Luang Phu began to make them in this form also.

Luang Phu Prohmma's amulets are of the finest and most powerful, but are very rare to find these days, because those who worship Luang Phu Prohmma and his amulets tend to keep them, and are not likely to let them go again. 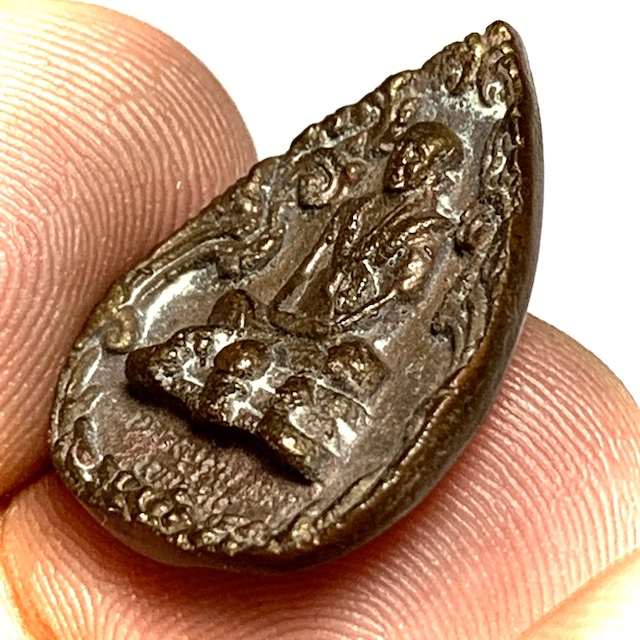 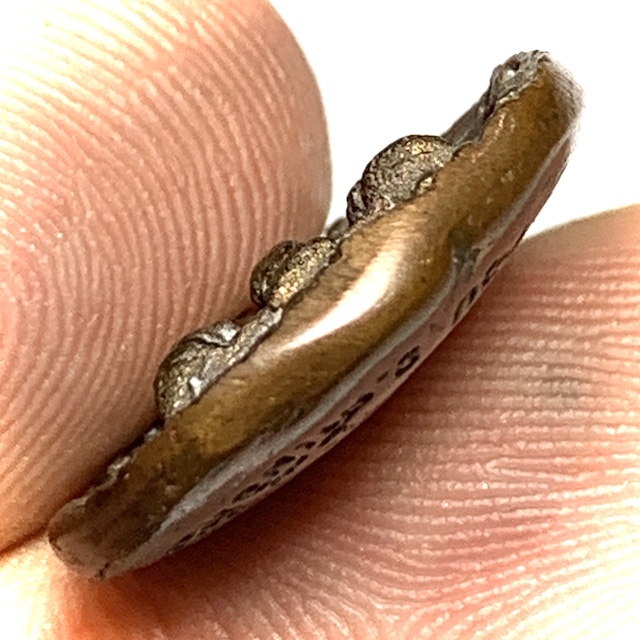 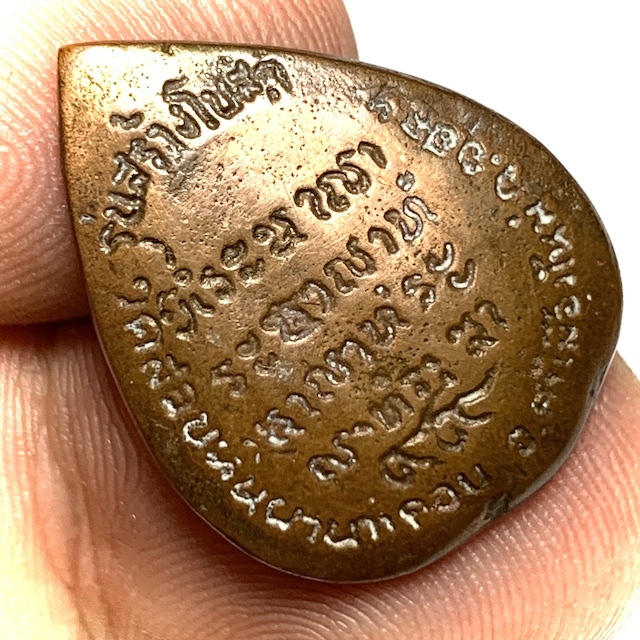 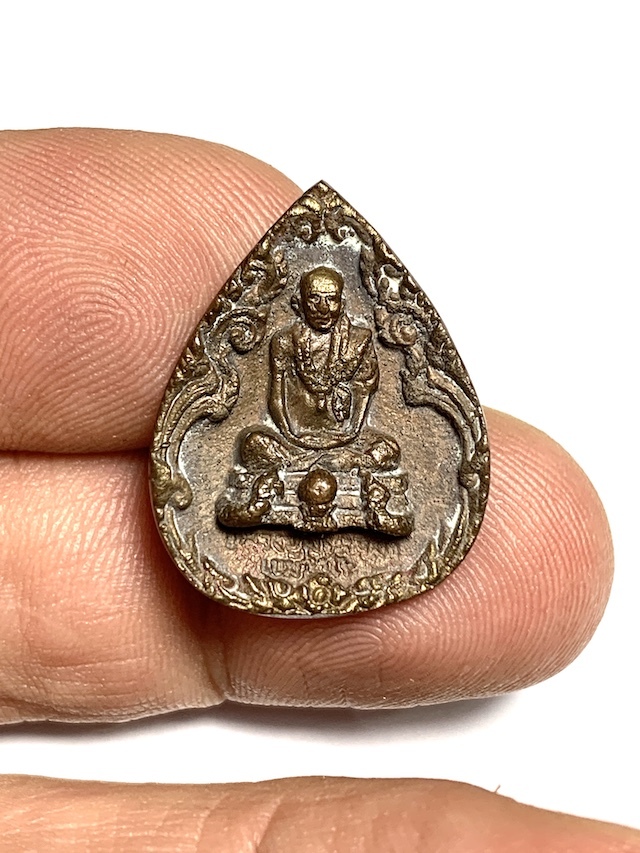 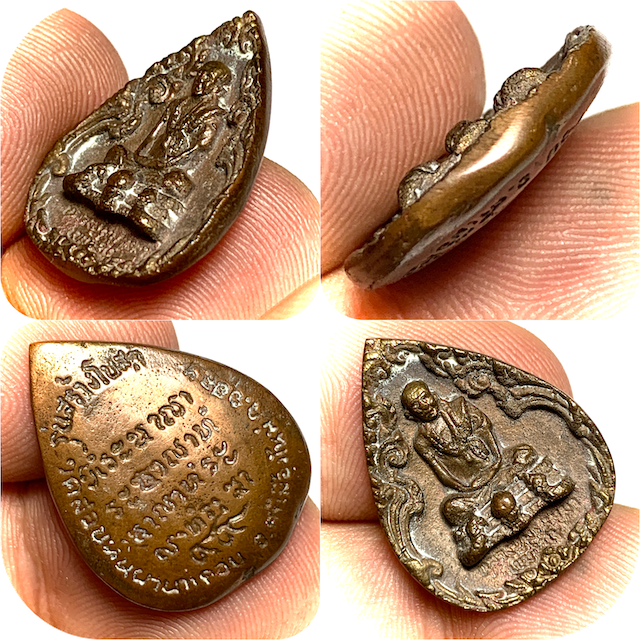 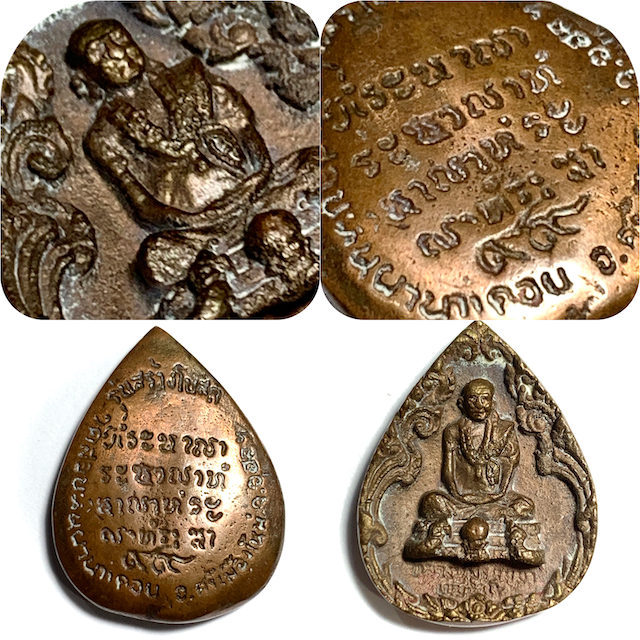