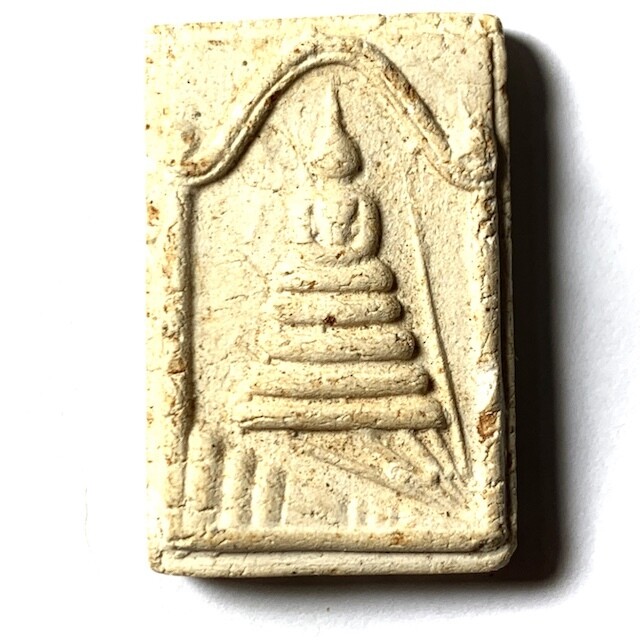 A very attractive votive tablet of high repute, the Pra Somdej Chedi Norn is a Pim that represents the 'sleeping Chedi Stupas' at Wat Lakorn Tam. The temple of Wat Lakorn Tam was close to Wat Rakang Kositaram, and it was the Great Somdej Pra Puttajarn (Dto) Prohmrangsri of Wat Rakang Kositaram who financed and installed two sleeping Chedi Stupas at the temple.. One of the rarest models to be found from the 4th Largest Amulet Blessing Ceremony in Thai History, and a pristine exhibit of the Pra Somdej Pim Wat Lakorn Tam, Sacred Powder Votive Tablet. This exhibit is one of many models from the Wat Prasat Bunyawas 2505-2506 BE Mega Blessing Ceremony, with the Blessings of 234 Master Monks over two ceremonies. Solid Silver Casing with Ya Rachawadee Enamels included with this amulet. 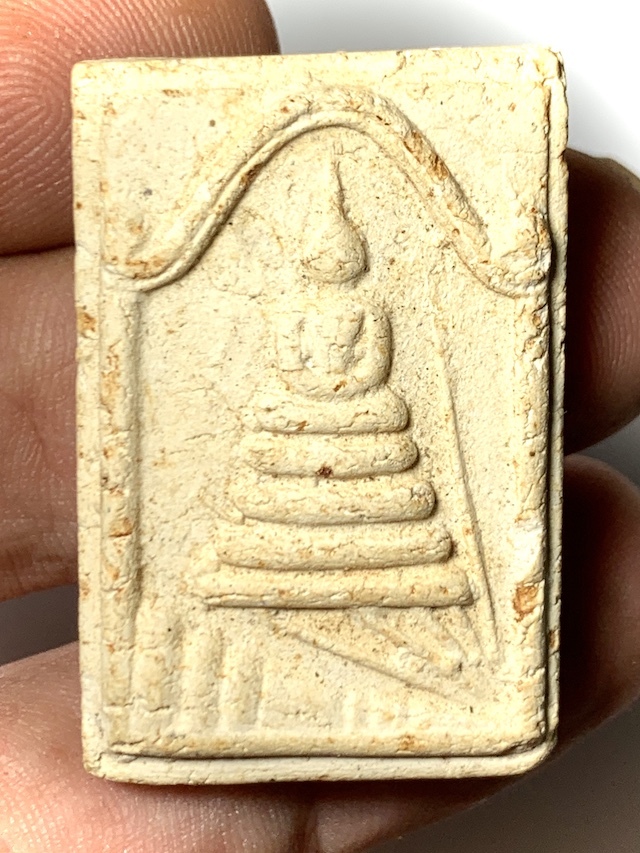 Apart from this Wat Prasat Model, another three different Masters of the Somdej Pra Puttajarn (Dto) Prohmrangsri lineage, and makers of the Pra Somdej within the Dtamra of Somdej Pra Puttajarn (Dto) Prohmrangsri, have made this model of Somdej Dto's original Wat Lakorn Tam amulet; Namely Luang Phu Nak, Luang Phu Hin, and Luang Por Supoj. Each Master pressed and blessed his own versions. 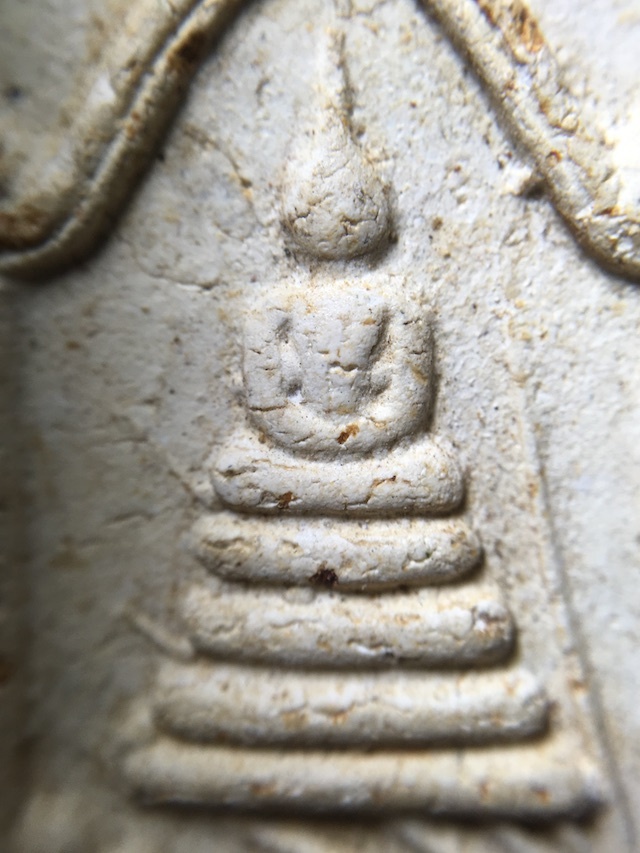 This model is pressed in Nuea Pong Wised, containing 5 kinds of Sacred Yantra Powders and broken amulets from from many Great Temples and Guru Masters. The amulets were Blessed by 234 Great Guru Master Monks, in Two Massive Blessing Ceremonies at Wat Prasat Bunyawas. 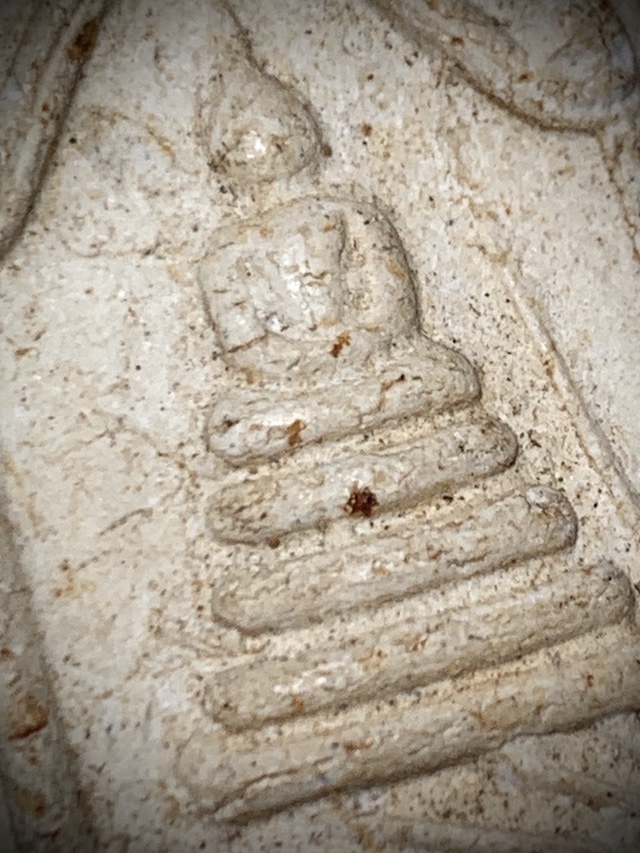 Free Shipping is Included with this Amulet as well as offer of free Stainless Steel, or Waterproof Casing. The rear face is 'Hlang Riab' smooth face, but when viewed under the eye loupe, reveals the 'roi norn' maggot tracks which are usually visibly evident to greater or lesser degree in the Wat Prasat Bunyawas Somdej Amulets. 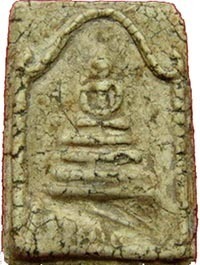 Left; You can see an example of the original Pra Somdej Wat Lakorn Tam amulet from Wat Lakorn Tam to the left, which is said to have been one of various pim made by the great Somdej Pra Puttajarn (Dto) Prohmrangsri of Wat Rakang Kositaram. Indeed, it seems that there are some major similarities, and that the design is partially inspired from the Wat Lakorn Tam Amulet. This also makes complete sense, when we consider that all of the makers of further editions of this amulet, were related to the lineage of Wat Rakang Kositaram or Somdej Pra Puttajarn (Dto) Prohmrangsri, or both. 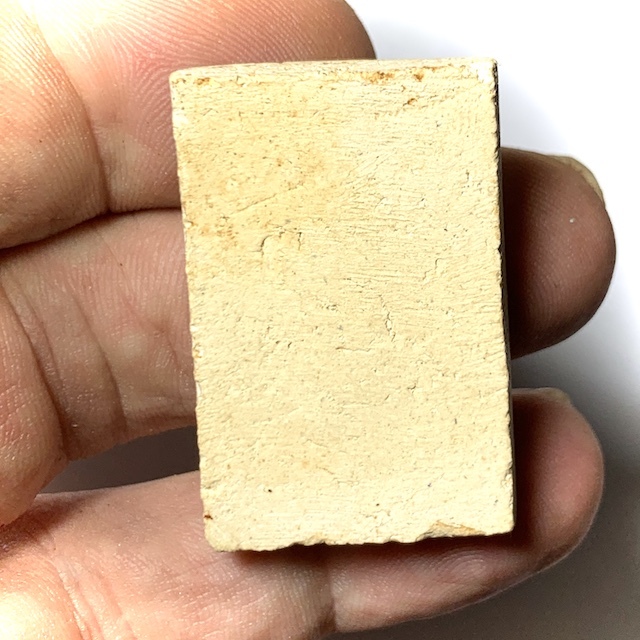 These maggot track markings are also often found in the amulets of Wat PLab, Luang Phu Phueak, and Luang Por Supoj of Wat Sutat, for they all used the same method to make magic chalkstick 108 Yantra Powders, according the the Dtamra Pra Somdej methods of the Grimoires found and used by Somdej Pra Puttajarn (Dto) Prohmrangsri and Pra Ajarn Saeng, nearly 200 years ago.

Below; Small fragments of broken pieces of Pra Somdej Wat Rakang Kositaram can be seen along with Pratat Hin Silatikun present within the Muan Sarn Sacred Admixture. 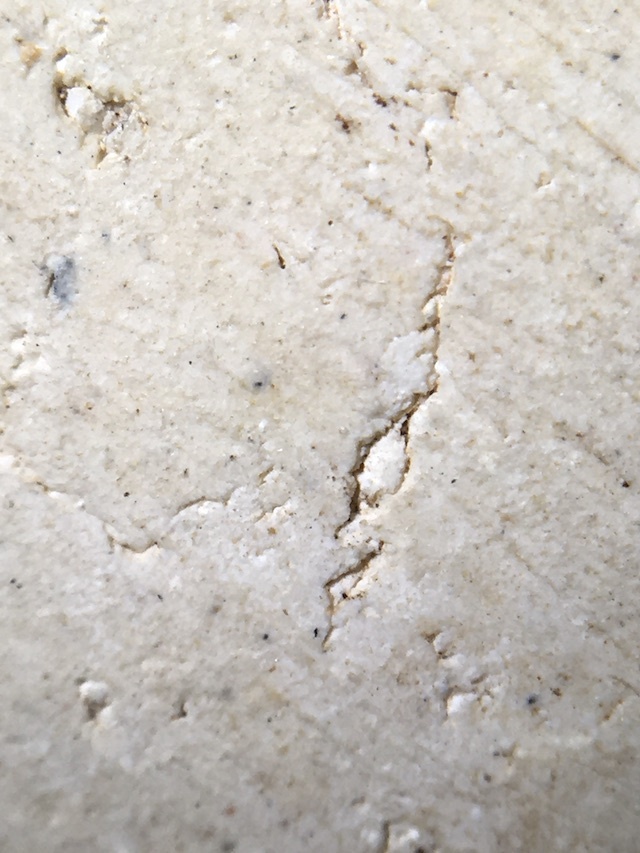 Below; Macro Closeup of the 'Roi Norn' Maggot Track markings in the rear face, which occurs from the contraction of the very fine Puttakun and Plueak Hoi within the Muan Sarn Sacred Powders 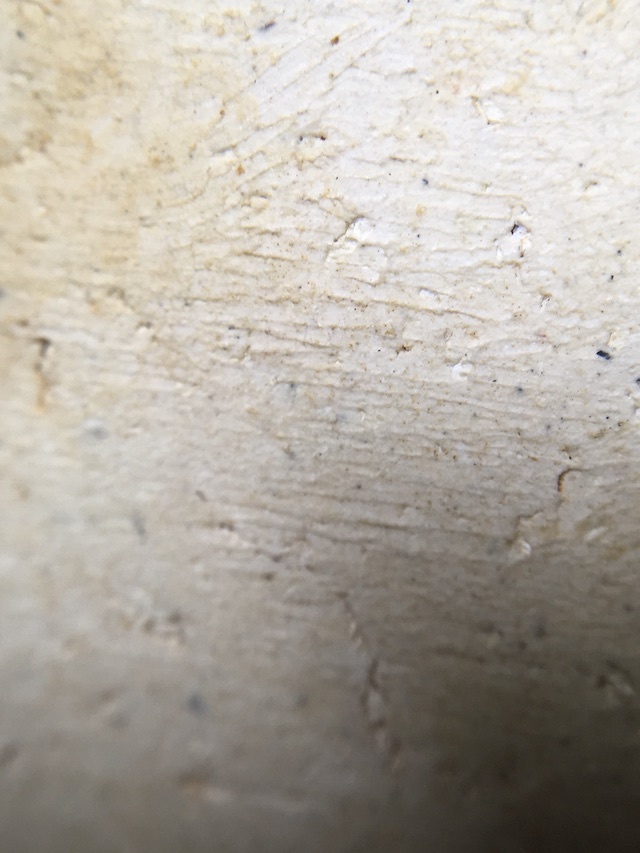 Free registered air parcel shipping worldwide, and silver casing is included. The Pim Sam Chan is a relatively rare model of the edition, and this amulet is also an especially beautiful exhibit. The presence of Muan Sarn Powders from Wat Bang Khun Prohm and Wat Rakang Kositaram amulets is evidently present within the Muan Sarn Clay.The 2555 BE (1961) Wat Prasat Bunyawas Edition Amulets, is a universally accepted and officially recognized edition of classic Buddhist Amulets, of extremely high esteem. This model is a Pim Yai Gaes Talut Sum, and is in Pristine Condition. 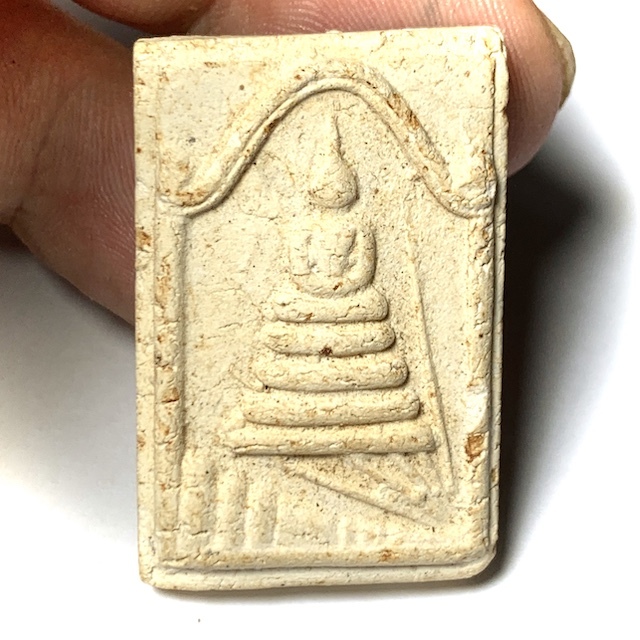 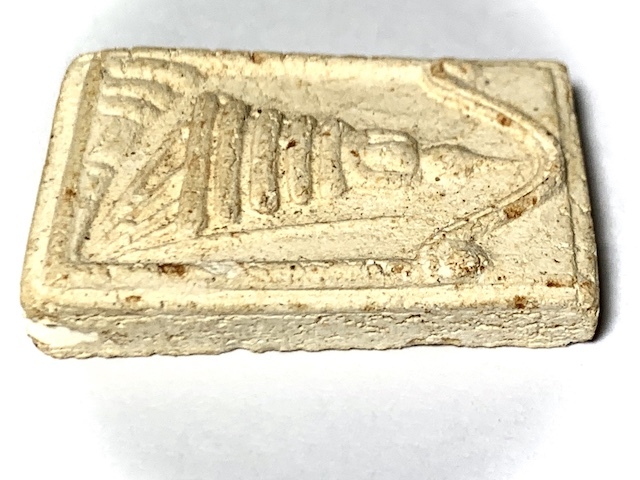 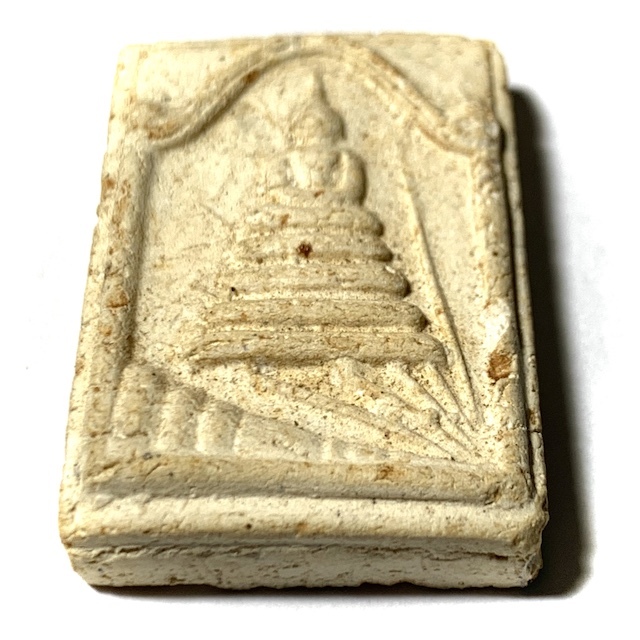 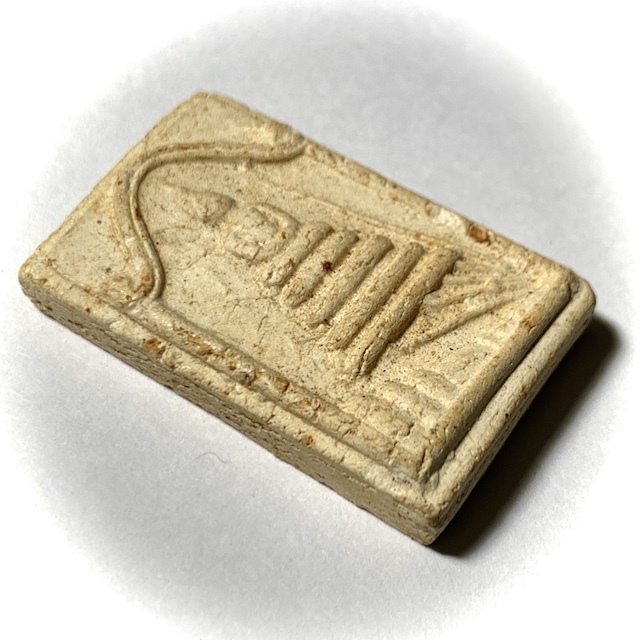 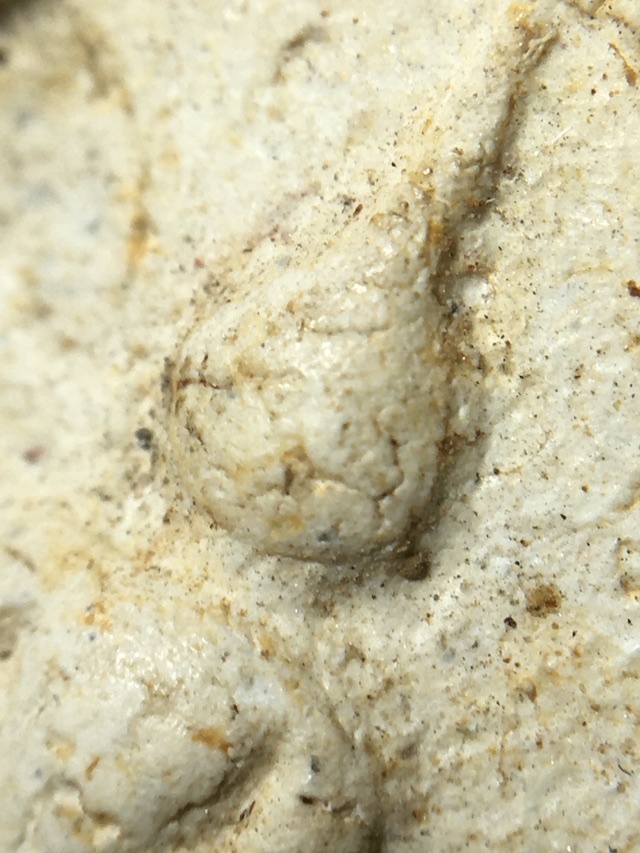 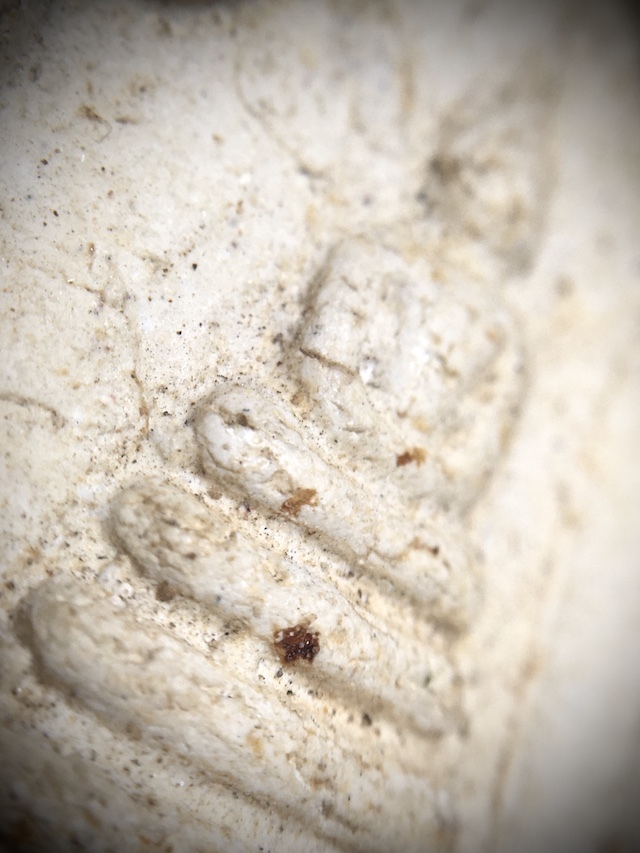 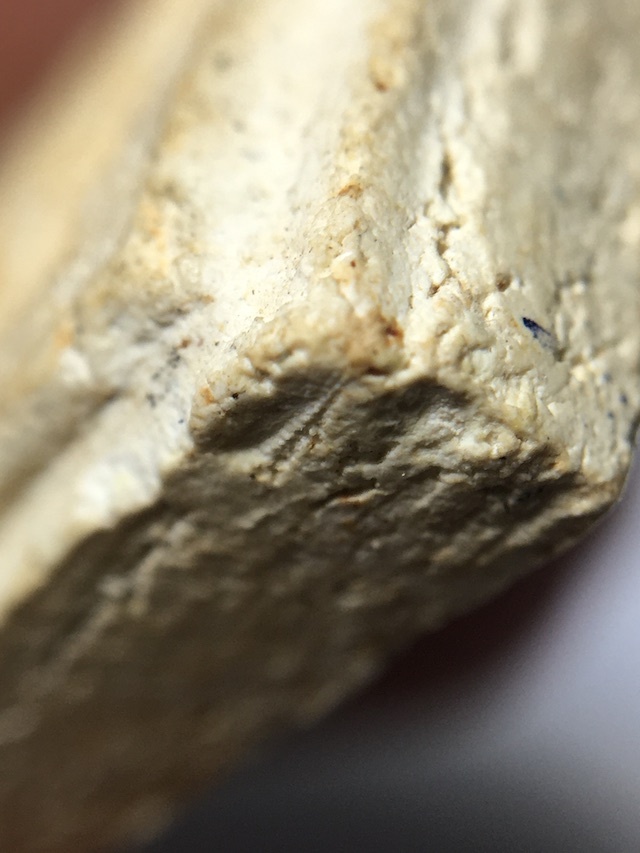 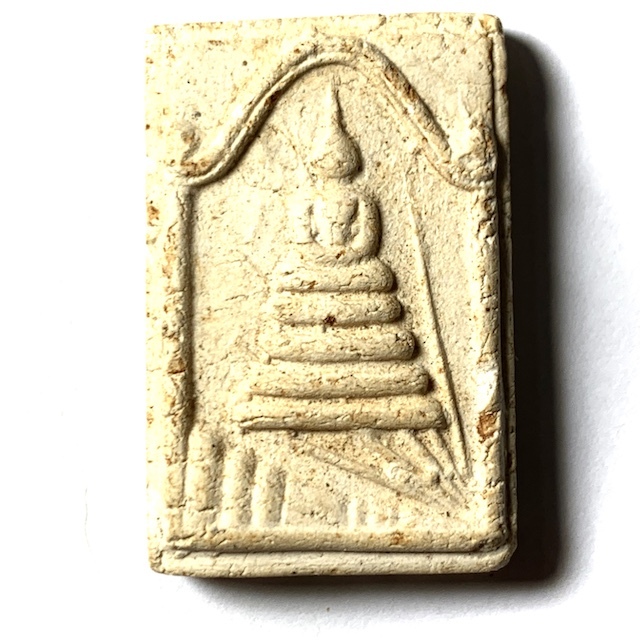