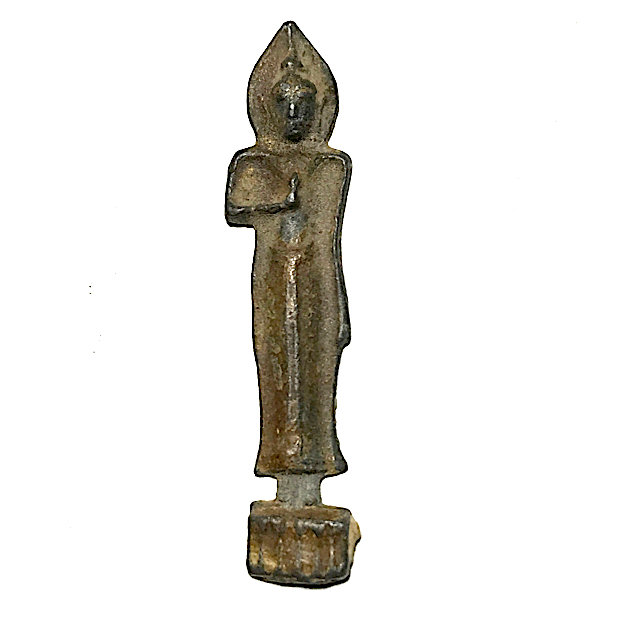 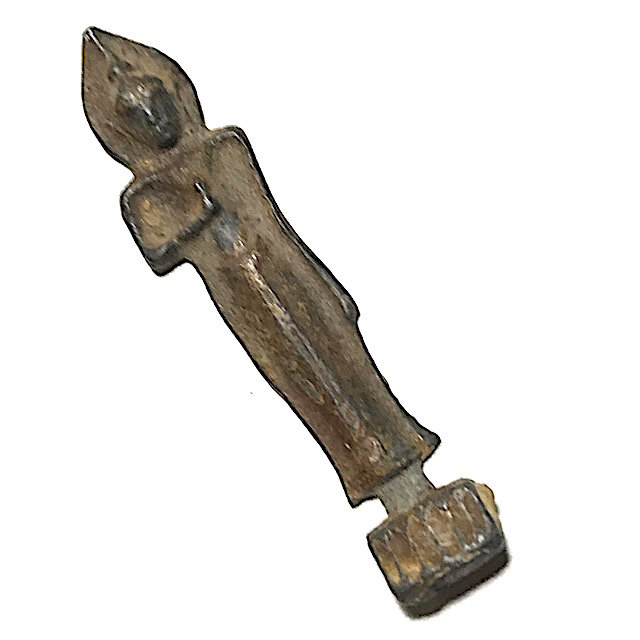 1. Ananda Savaka (Pra Anont) asked to be the Buddha's first assistant; The Buddha conceded to this wish and bestowed permission to be his 'right hand man)

2. Jivaka Rishi (the Buddha's Physician) asked for clothing iinstead of a robe to wear, and the Buddha gave permission for this.

3. Nang Wisakha (female devotee) sent her assistant Nang Tasi to the temple of the Buddha to invite Bhikkhus (monks) to come and receive alms at her home, but Nang Tasi, when she arrived at the temple, the monks were washing their robes and not wearing the saffron robes, so she thought there were no monks, only laymen washing themselves, and went back to Nang Wisakha's home without inviting the monks. 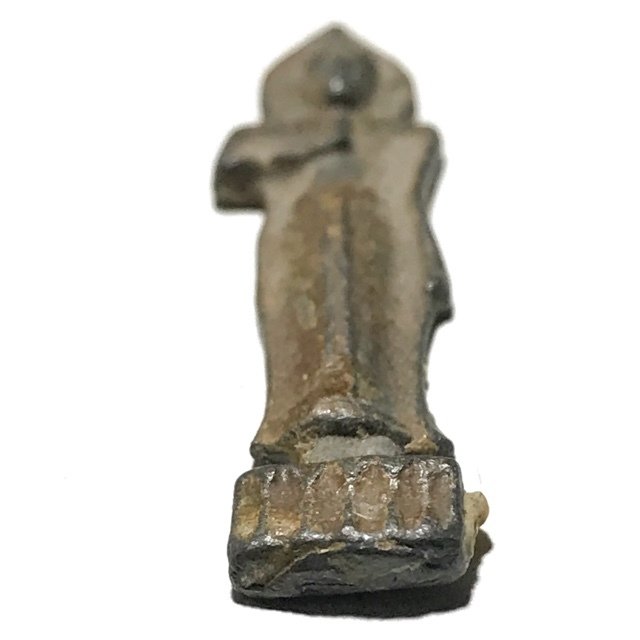 But Nang Wisakha was very intelligent, so she went to beseech 8 things from the Buddha within this third single request;

2. Permission to donate food to Anantukas (visitors from afar, be they monks or not), because they may be lost on their travels and be hungry, not knowing their way)

3. Permission to 'Patta' - meaning to donate travel necessities to monks who were going out to travel (Tudong) outside of mealtimes, so they would have food or other necessities during time on travels, according to the rules of the Buddhist canon, in case they found themself far from villages where they could beg for alms

6. Permission to donate Kilana Pesach (Healing Medicines) to Sick Monks, to heal their ailments and sicknesses.

8. Permission to donate cloth to cover themselves when bathing, so they do not offend any devotees who may approach and see them naked. 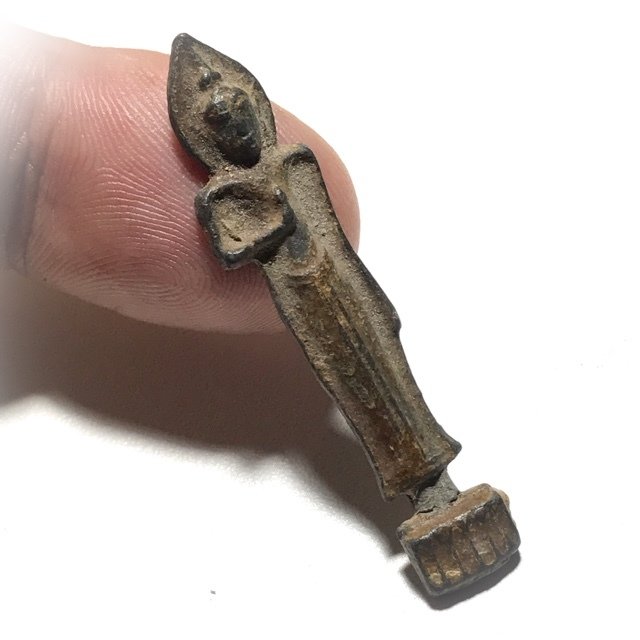 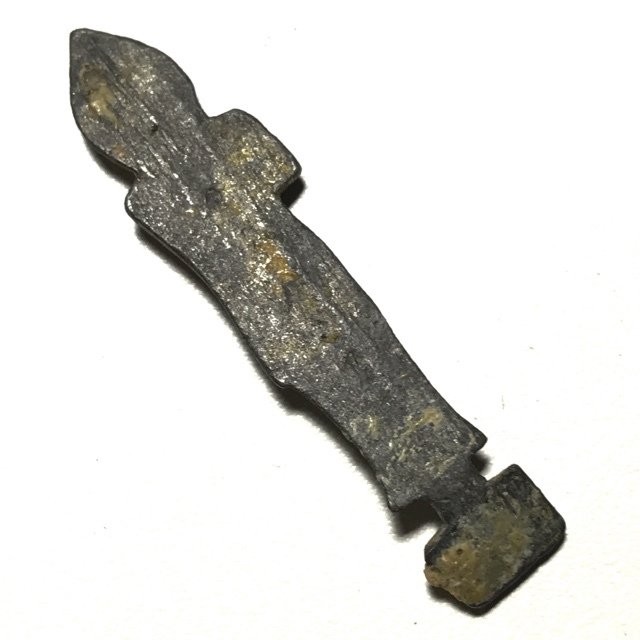 The Kru Wat Geng Jeen amulets are known for their 'Sanim Daeng' reddish beige rust forming as 'Kraap Kru on the front, and that most of them were originally coated in gold leaf in manu cases. The rear faces of the amulets often have a fine layer of white cement from the Kru chamber adhering to the surface, which is one of the criteria used for recognising this particula Pra Kru, for they all have some to greater or lesser degree on the rear face. Some examples of course were cleaned by the devotees who wore them to increase visibility and make them more attractive for wearing, but the sanim daeng and texture of the sacred leaden chanual alloy remains visibly recognisable even in those exhibits which were cleaned from Kraap Kru. 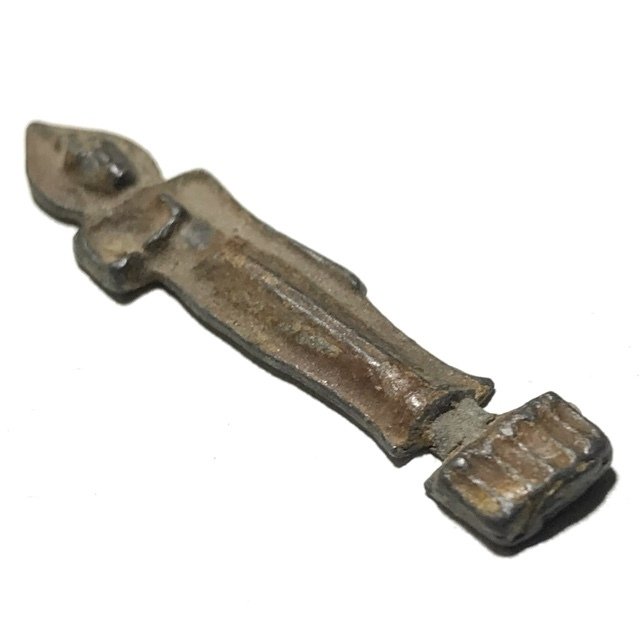 The rarer and more highly sought after models include the Pim Mara Wichai Thaan Pha Tip, the Pim Samati Thaan Song Chan, the Pim Mokkhallana or Saributra (Pim Sawok - praying monk listening to the Buddha - can be seen as either Maugalyayana Arahant, or Sariputra Arahant), and the various models of which only few were found, and are extremely rare, such as the Pra Sangkajjai, Prajam Wan Birthday Buddhas, Pim Pra Nakprok, and the Pim Pra Pratan Thaan Tip. 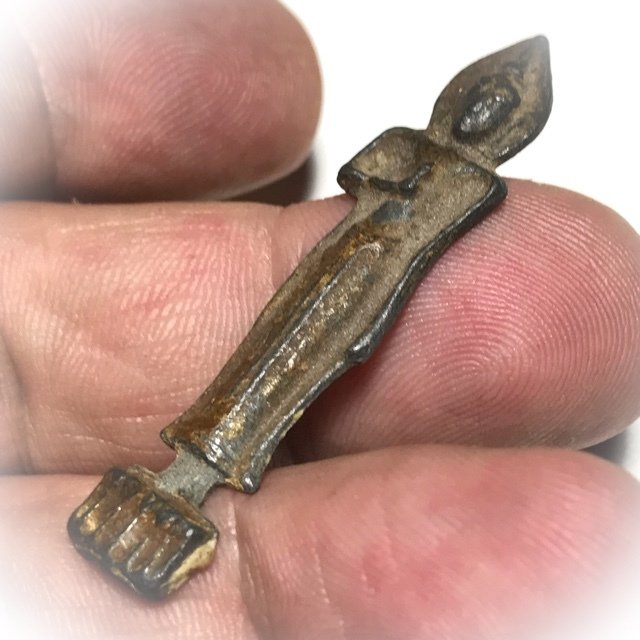 Pra Ajarn Geng, the maker of the amulets back in the late Ayuttaya period, was a famous Kammathana Master Monk of his time. It is believed by experts that Pra Ajarn Geng, the maker of the Pra Kru Wat Geng Jin amulets, was the original Kroo Ba Ajarn who bestowed his magical Wicha onto some of the Great Masters of Olden days we know, such as Luang Por Dto of Wat Khao Bor Tong, Luang Por Am, of Wat Nong Grabork, the Great Luang Phu Tim of Wat Laharn Rai, and Luang Por Tarb of Wat Nong Grabok Kheun Pheung. 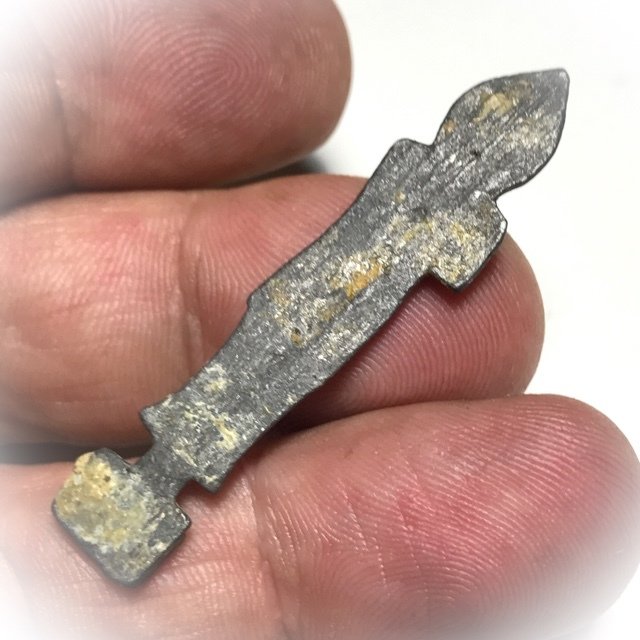 Below; One of the other preferred models of the Kru Wat Geng Jeen; the Pim Thaan Pha Tip 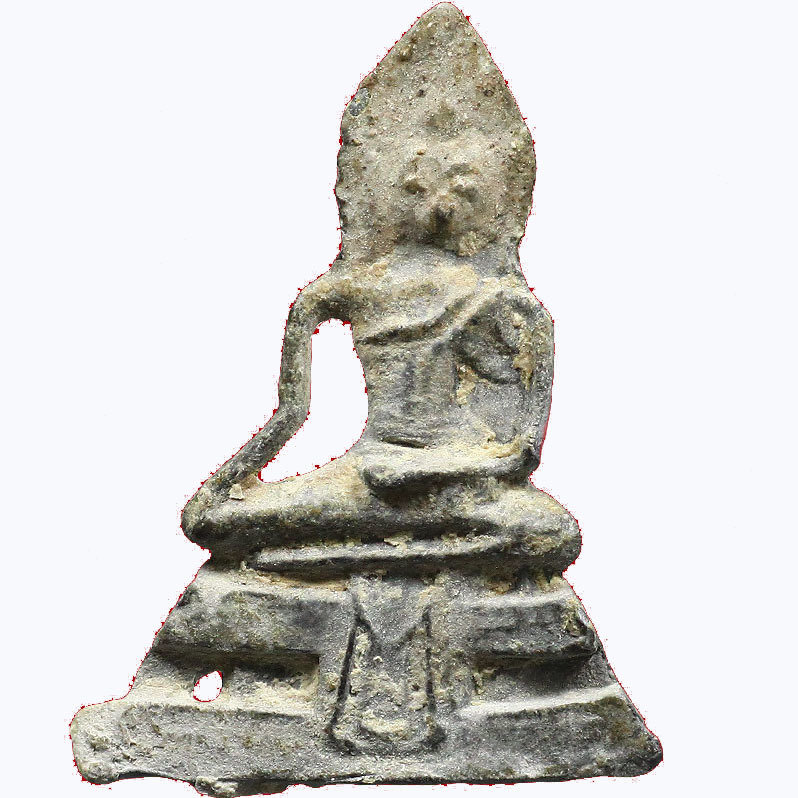 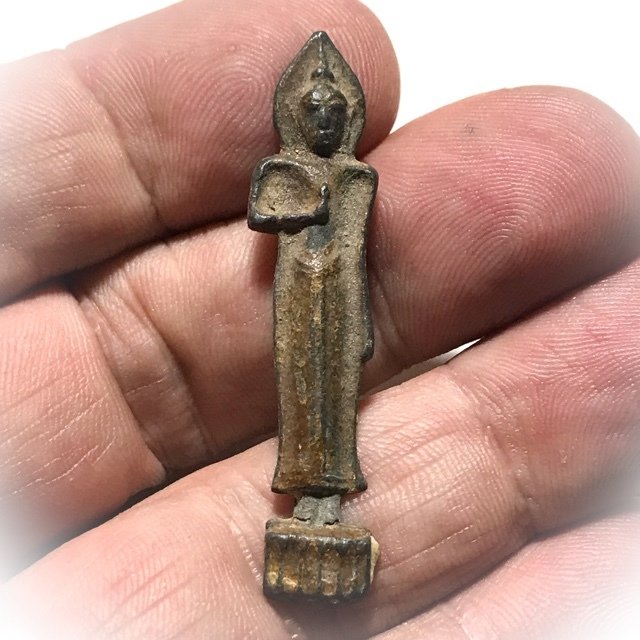 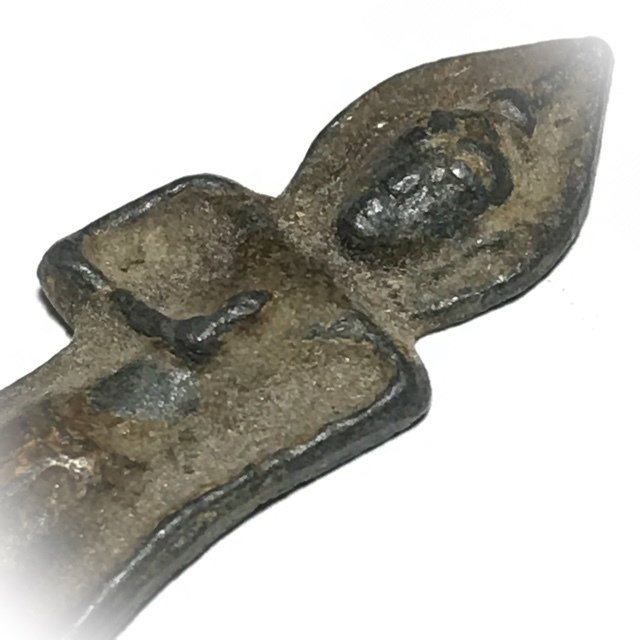 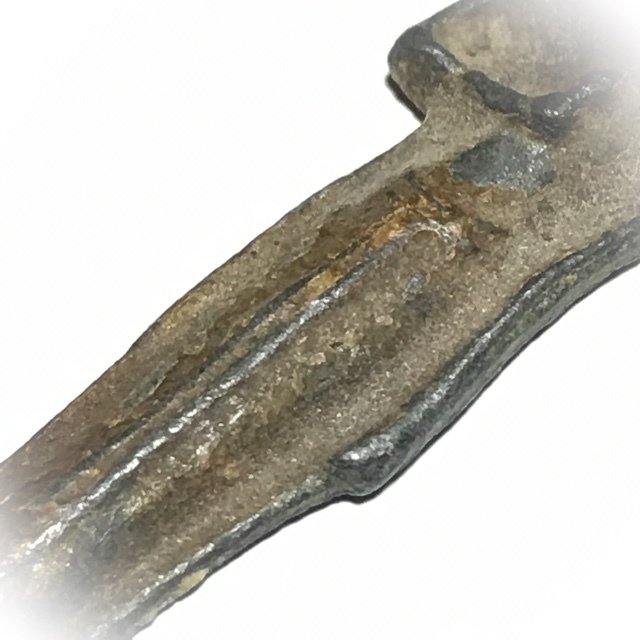 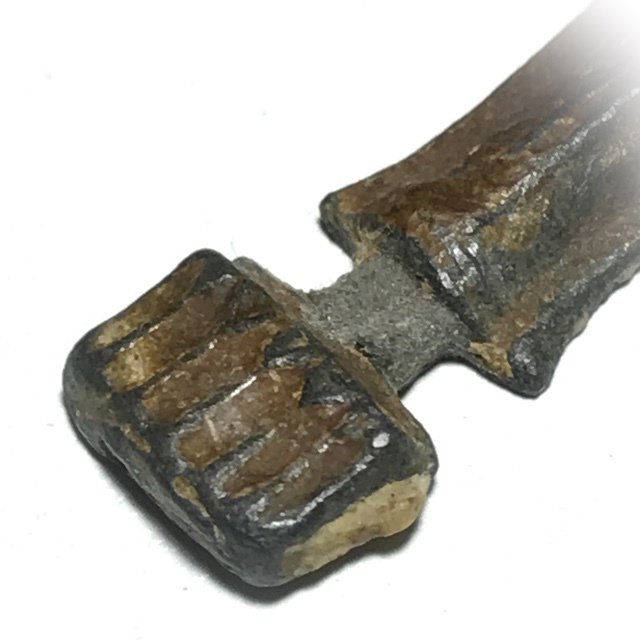 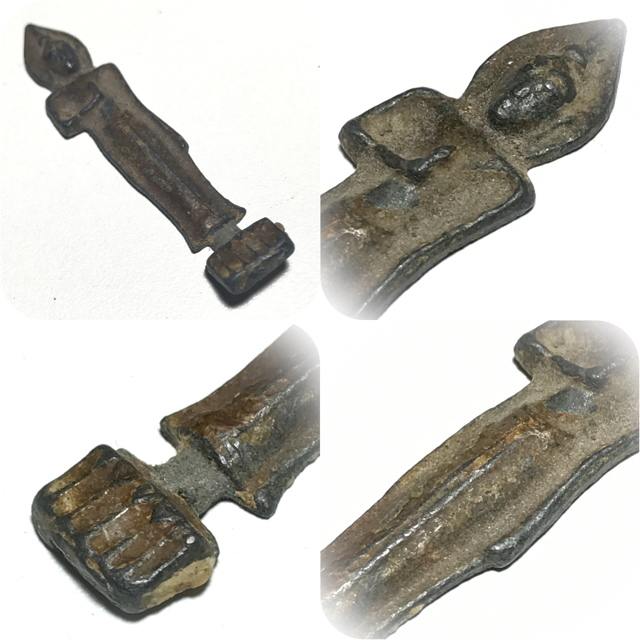