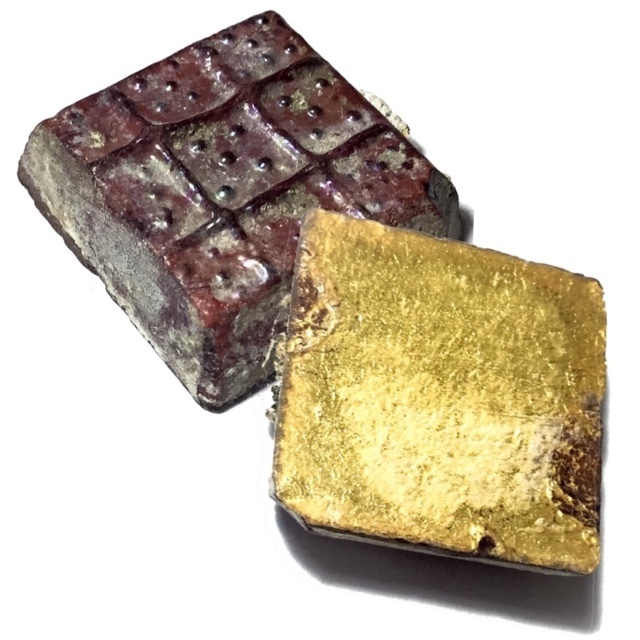 A most Sacred and Spiritual Acquisition for Bucha, with Truly Ancient Origins; Noppagao Pra Prang - a piece of tile stucco from the ancient Chedi Stupa relic monument at the temple of Wat Pra Sri Radtana Mahatat in Pitsanuloke.

The Stucco piece derives from over 100 years ago, during the restoration period where the stucco tiles were replaced in the year 2454 BE. Luang Por Plien, the Abbot of the time, had requested for stucco tiles to be comissioned from Italy, with a thick layer of gold on the outer smooth face, and nine squares in three lines on the inner side. The nine partitions of the rear face give the artifact the name 'Noppagao'.

Each of the nine squares, has small round protuberances. The protuberances were to help the tile to stick to the Chedi Stupa using Cement.Some tiles had different numbers of protuberances, probably because the temple may have used more than one manufacturer for the tiles, due to the massive number of tiles needed to cover the Stupa. 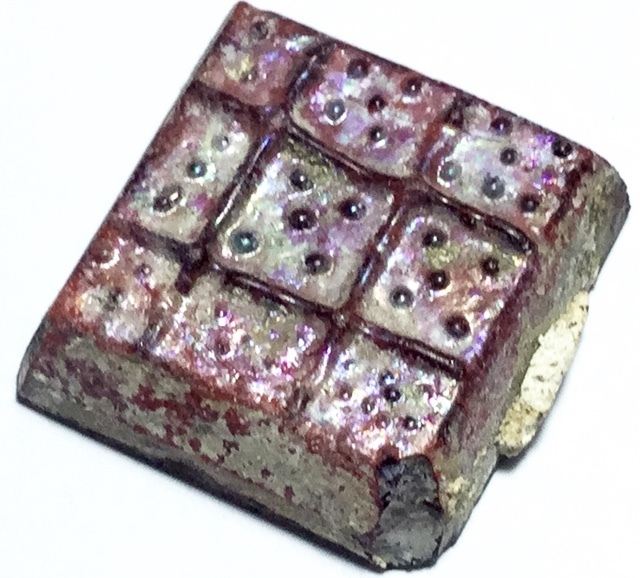 Noppagao is the name given to this kind of Stupa Tile, because 'Gao' means the number 9, and the stucco tile has nine squares on the rear face. An extremely Rare and Sacred artefact that can be considered an immensely lucky opportunity to obtain such a Sacred and Ancient Religious Object.

Wat Pra Si Radtana Mahatat (Thai: วัดพระศรีรัตนมหาธาตุ; "Temple of Great Jewelled Reliquary"), also colloquially referred to as Wat Yai (Thai: วัดใหญ่; "Big Temple"), is a Buddhist temple (wat) in Phitsanulok Province, Thailand, where it is located on the bank of the Nan River near Naresuan Bridge. The temple is famous for its gold sculpture of the Buddha, known as Phra Putta Chinarat (Thai: พระพุทธชินราช; "King of Victory"). Some people consider it to be the most beautiful buddha in Thailand. Wat Pra Si Radtana Mahatat, known among the locals as "Wat Yai", was founded in 1357 by King Lithai of Sukhothai. 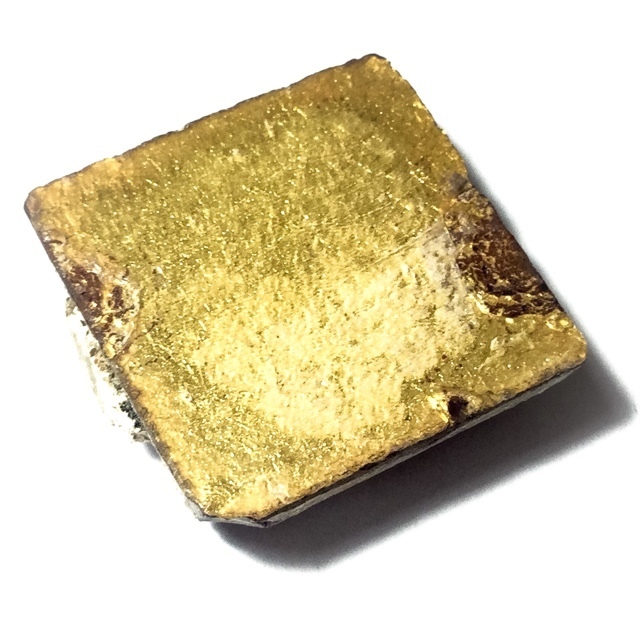 The face of the stucco tile is covered with a layer of gold, which is the outer face which was stuck to the top of the golden Chedi Stupa spire (see below pic).

The temple of Wat Pra Sri Radtana Mahatat was built at the same time as Wat Phra Putta Chinna Si, and “Wat Pra Si Sasadaram. During the reign of Ekathotsarot of Ayutthaya, its Buddha image was gilded and the temple was later developed by Chulalongkorn and Bhumibol Adulyadej of Rattanakosin. 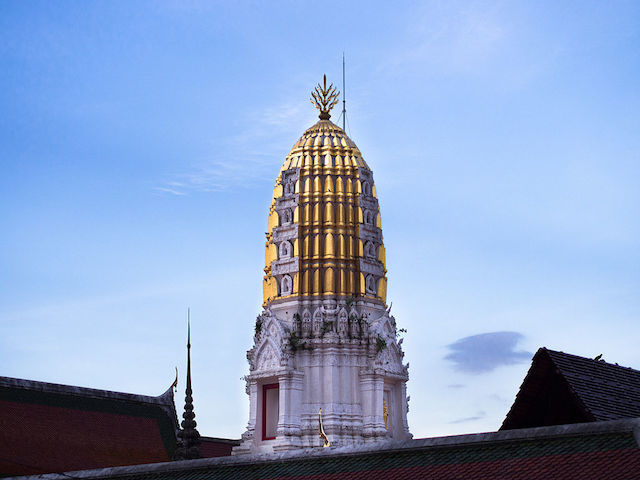 The temple's large Vihara Shrine has an immense main entrance with mother-of-pearl inserts donated by King Boromakot in 1756. Beyond the wihan is an Ancient Khmer style Prang (Chedi Stupa), the inside of which can be accessed via a stairway. The prang is said to enshrine relics of the Buddha. 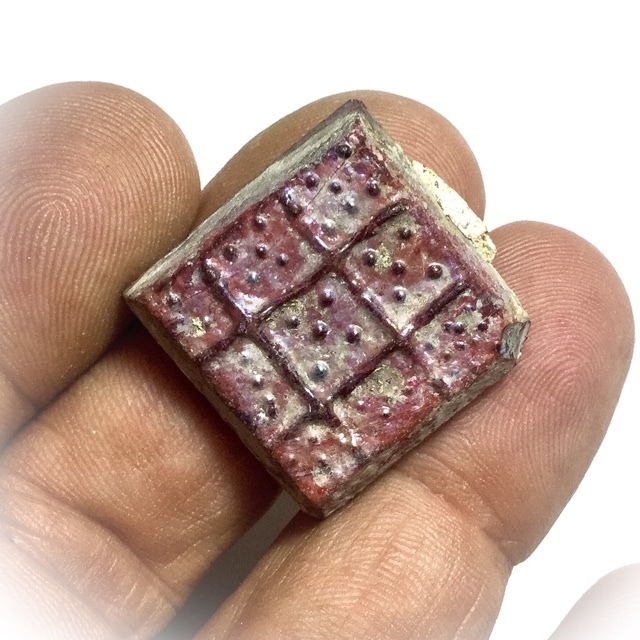 This piece of Stucco is from the restoration of 2555 BE, where tiles of the outer surface of the Prang Stupa, were removed to be replaced by new tiles. The ministry of Arts and Culture commissioned the restoration, and so the old tiles were removed and blessed in Buddha Abhiseka Ceremony, with Sincana cords stretching from within the Stupa Chedi, to enter into the Shrine Room of the Uposadha at the temple, to connect to the Nopagao tiles, and channel the energy from the Stupa and the Buddha Relic into the Noppagao Pieces. The Noppagao were then blessed, empowered, and distributed to some of the faithful devotees. 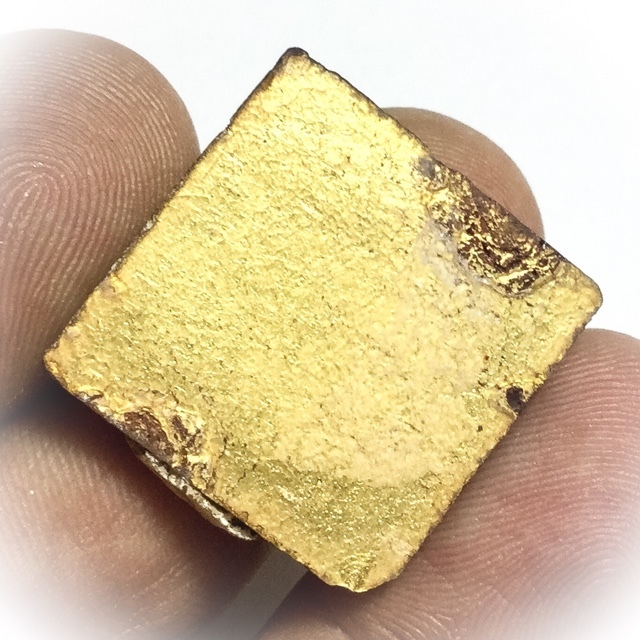 The Stupa is an extremely sacred relic shrine which has stood for many Centuries, recieving the prayers of monks and devotees, and which has housed the Sacred Buddha Relics within it, which emanate their Sacred Power through the Stupa.

A Prang is a tall tower-like spire, usually richly carved. They were a common shrine element of Hindu and Buddhist architecture in the Khmer Empire. They were later adapted by Buddhist builders in Thailand, especially during the Ayutthaya Kingdom (1350–1767) and Rattanakosin Kingdom (1782-1932). In Thailand it appears only with the most important Buddhist temples. 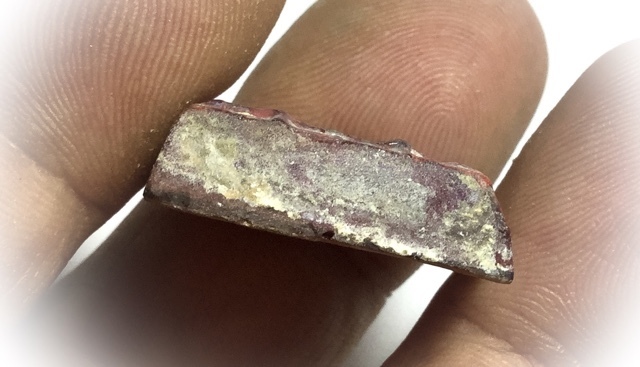 A powerful Sacred Votive Tablet of Pure Buddhist Nature, which is of immense Religious and Historical significance, and an extremely faith instilling Sacred Artifact, which any true Buddhist would wish to have as a Personal Religious Relic. 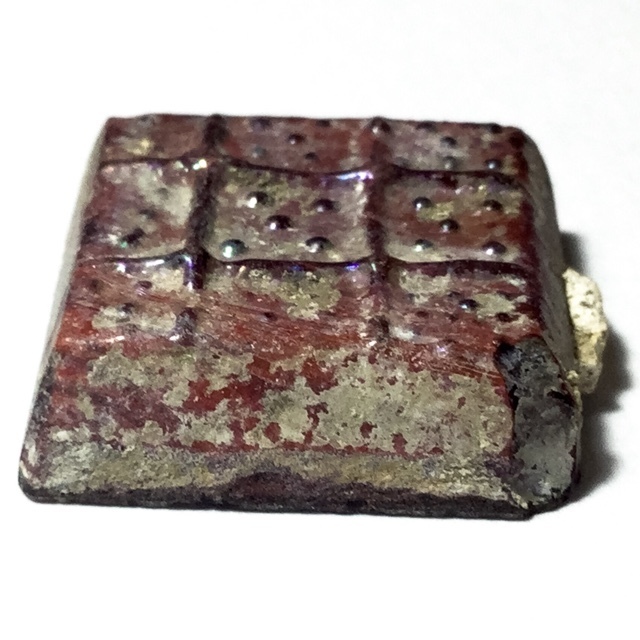 A centuries old artifact that has recieved the prayers of monks over many hundreds of years, and which has been a sacred edifice housing a Buddha Relic, is indeed, a most desirable Sacred Artefact which can be kept on the Altar, or which can be encased and worn as an amulet, for Klaew Klaad, Metta Maha Niyom, Maha Lap, Kong Grapan Chadtri and Serm Duang. 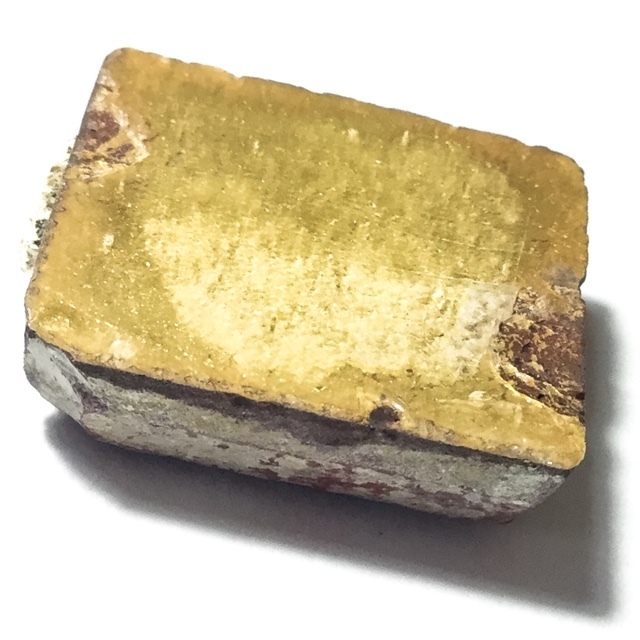 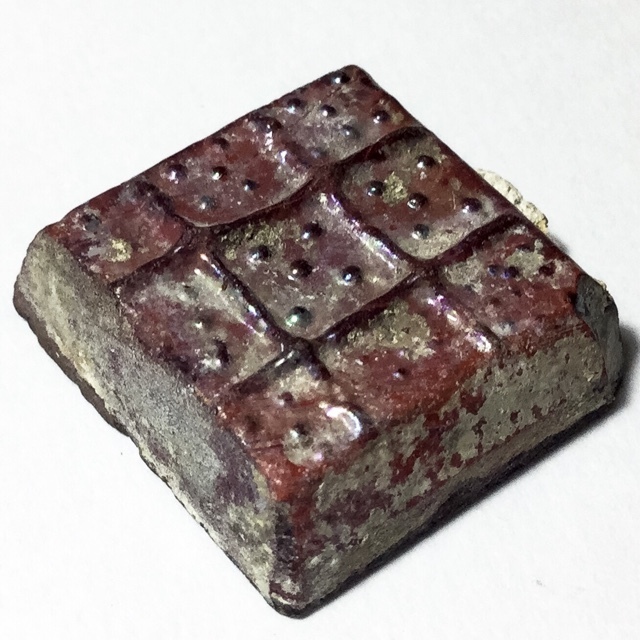 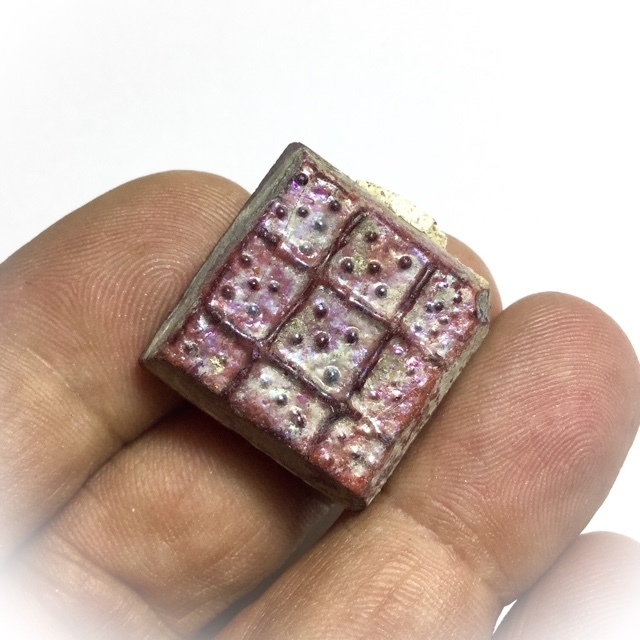 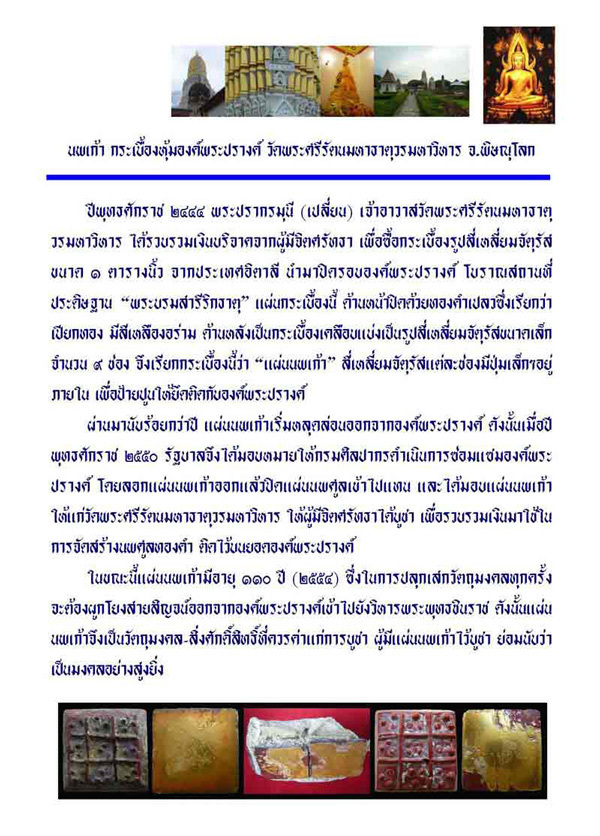 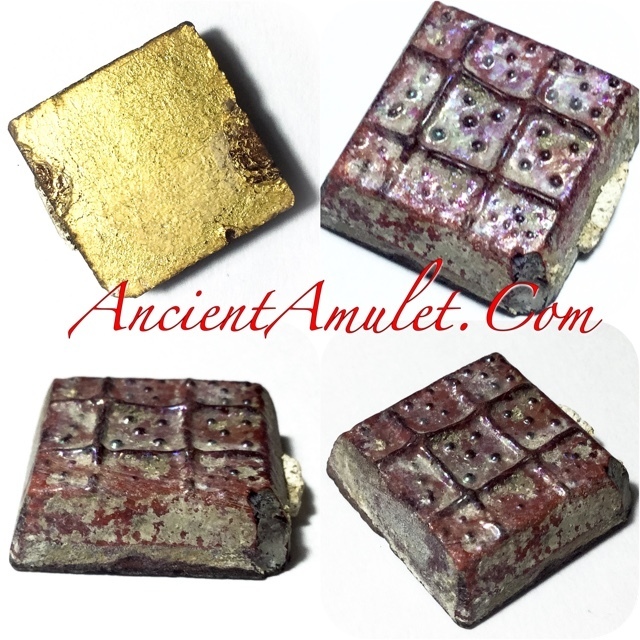