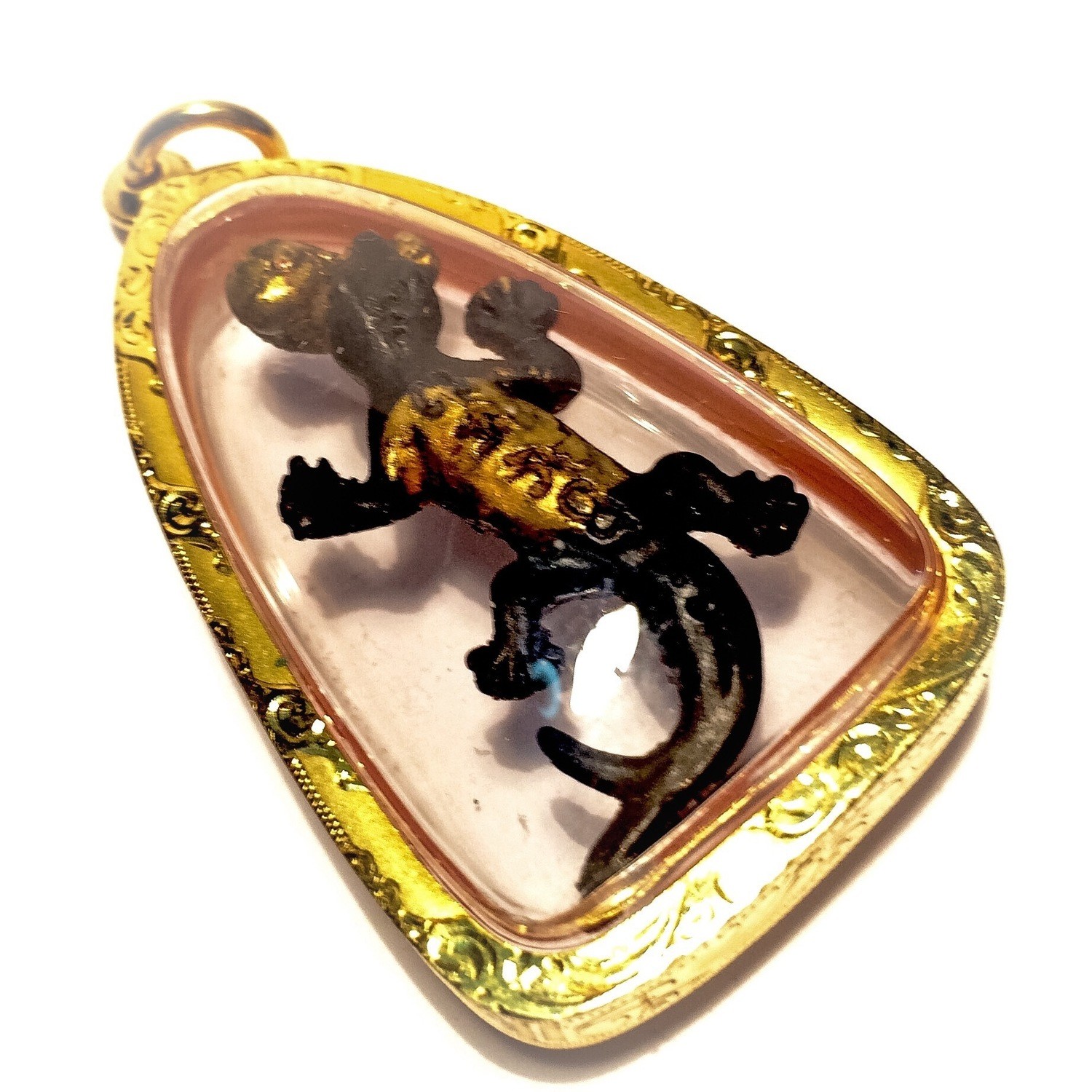 Sacred hand carved black coral Lucky Gecko, holding Gold Sack in its mouth, from who may be perhaps the Greatest Master of all time for the Wicha Jing Jok, Luang Phu Nai (2446 - 2531 BE), of Wat Ban Jaeng.

This particular manifestation of the heavenly gecko is empowered primarily as a wealth attraction and treasure guardianship amulet, but as is the case with all Gecko Magic, possesses powerful Anti Black Magick, Maha Sanaeh, and Kong Grapan Klaew Klaad powers as additional effect.


The Jing Jok Gecko is as deceptive as an amulet, as it is in real life, because it looks pretty harmless, but in fact, its ability to enter wherever it wishes, eat what it wants. The Gecko knows how to survive in all circumstances, and is almost second to none in catching its prey with the minimum of effort, laying in wait for the prey to fly or crawl into reach, and then snapping it up. Its invisibility though camouflage, and its harmless appearance, and agile physique, allow it to evade the glance of its potential hunters, and to escape them easily if they do happen to approach. 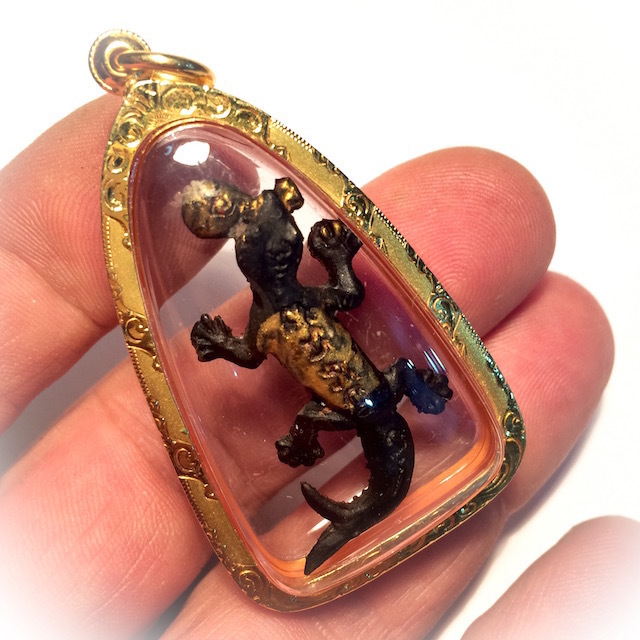 The amulet is encased in a Custom made 96% Pure Solid Gold Frame, with waterproof bubble casing.

The Jingjok is the most desired and collected amulet types coming from Luang Phu Nai. Jiing Jok Luang Phu Nai are the most nationally and internationally famous Gecko amulet of all the Pantheon of Thai Classic Pra Niyom in HIstory to Date, belonging to the 'Krueang Rang' (Talismans and Charms) Category of High End Masterpieces. 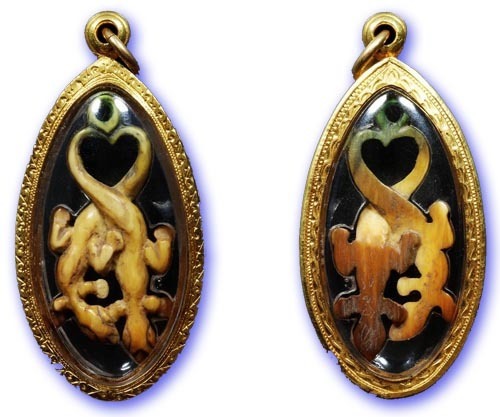 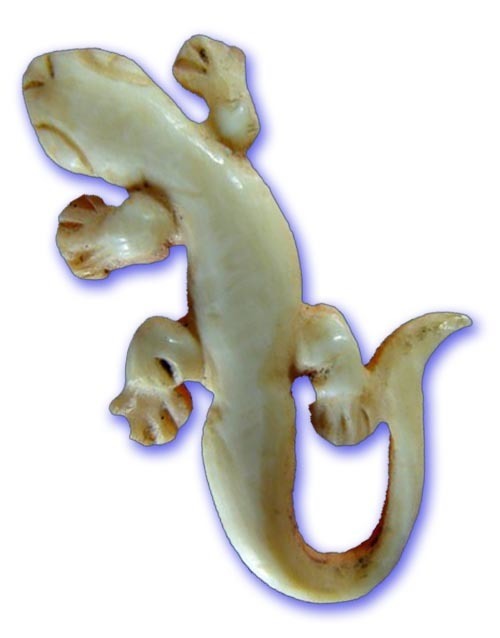 
Luang Phu Nai was a previous generation olden days master of Sak Yant Thai Temple Tattoos, and a master amulet maker, especially renowned for his carved sacred gecko charms, as well as many other Amulets. His life as a Buddhist Monk is highly documented with many different authorships of his Biography and life's works.


His amulets are equally documented and highly prized with collectors of this Genre of Masterpiece Amulet, and the Jing Jok Luang Phu Nai can be found in almost every high class Amulet Magazine, and Encyclopedic Work of importance ever published. Considered by most people to be the number one Gecko Talisman of all time. The legends of Luang Phu Nai's powers extended into the world of Sak Yant Thai Temple Tattoos, and Devotees of the Occult, and Buddhist Amulets, and the Faithful Followers of Luang Phu Nai's Buddhist Practice and teachings.


Luang Phu Nai was born in the year 2446 BE, and Ordained early in his childhood as a Samanera novice Monk, at the age of 12 years old, and hence never lost his purity. Then later, at the age of 22, he was ordained to the highest status of a fully ordained 'Bhikkhu' (that is to say, a fully fledged Buddhist monk). He remained Ordained and Pure from the age of 12 within the Buddhist Sangha, until the day he passed away in the year 2553 BE.


He was able to travel to Wat Pak Klong Makham Tao temple to study Sorcery and Buddha Magic with the great Luang Phu Sukh, and even met Grom Luang Chumporn the Royal Admiral Princely Lord, who taught him the missing parts of Wicha which had been left unstudied when Luang Phu Suk passed away.

Apart from the4 famously powerful Gecko Charms from this Great Master Guru Monk, Luang Phu Nai has also great fame for his Takrut Tone and Takrut Maha Ud amulets, and his Pra Buddha Kotama (Pra Putta Kodom) and Pra Mokkhallā (Maugdalyana Arahant) amulets (both models in small and large versions) and his Metallic Monk Coin amulets, all enjoy a highly revered and top rankiing position in the Amulet Appreciation Societies.

Simple Kata Chanting is enough normally to induce the power of the Jing Jok to attract lovers and customers, or to prevent Black Magic attacks. There are a multitude of different Wicha, and a large array of different shapes and sizes of Jing Jok used for different kinds of spells. Mostly they are of the Maha Sanaeh and Metta variety, but there are also pro-active Gecko amulets as well as those intended for more protective purposes, depending on the construction and empowerment of the spell.

The ‘Jing Jok’ (Gecko) is a Magical Animal that has dominated Thai Mythical beliefs since the Pre Buddhist Times of Animism. In Olden Times, Thai people would say that if you hear a Gecko greet you when you walk out of the house to go out, that you will be befallen by good luck, and have all the boys or girls you want running after you, have lucky windfalls, and other auspicious blessings. The Gecko is also a powerful protection against Black Magic, for the Sorcery within the Gecko itself is so high as to prevent any other Dark Sorcery from entering the sphere.

The Jing Jok is a highly reputed amulet used for increasing your Gambling Fortunes, and is one of the favorite talismans of the perpetual gambler. Its power to improve Business Talks and Commerce (sales), is Famous. In addition, the Jing Jok is pure Metta Maha Niyom, and Maha Sanaeh, and has been the favorite Love Charm of many generations of Thai people, and seems to be holding its place as the most popular Love, Commerce and Gambling charm. The Jing Jok is however not only able to bring Lucky Fortunes and Love to its owner, but is also powerfully endowed with Kong Grapan Magic to protect from deadly accidents and harmful attacks. Anti Black Magic is inherent within the Gecko Wicha too, and keeps any Curses or Dark Sorcery at Bay. 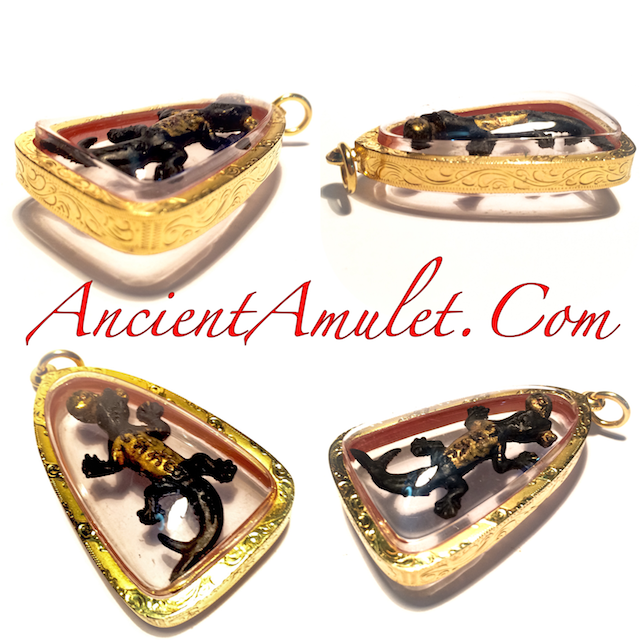