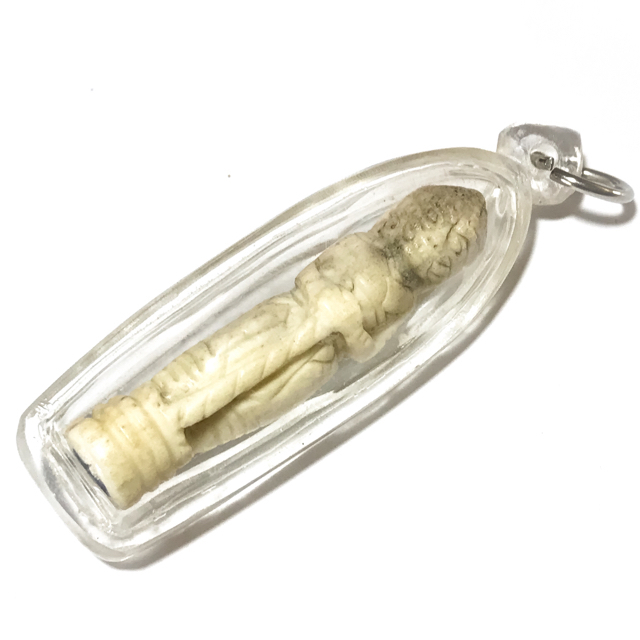 The statuette measures 6 Cm High, and is carved from Elephant bone, into the form of Taw Waes Suwan, the Millionaire Asura King of the Jadtu Maha Rachiga Kingdom of the Celestial Heavens, who commands all the denizens of Yaksa and Demonic Beings and Monsters with his Adamantine Crystal Club, a Cosmic Weapon able to smite the Demons and Bhuutaa. 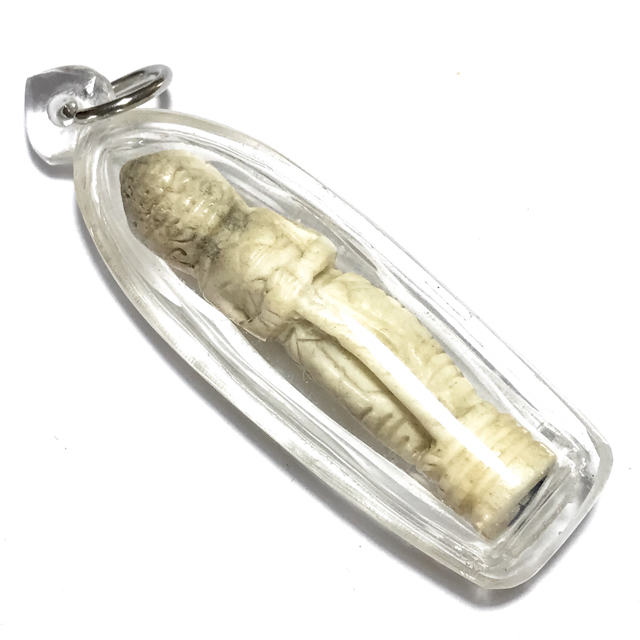 Taw Waes Suwann is a powerful protector of wealth, and Business Advancement, and protects against Black Magic, Demons and Bacterial Illnesses. Taw waes Suwan should also be revered by businessmen and financiers, and anyone who wishes to increase his financial and material wealth. Also in times of hardship and poverty, one should revere Taw Waes Suwann, which will enable you to have enough money to pay your bills and the cost of living with without any difficulty. 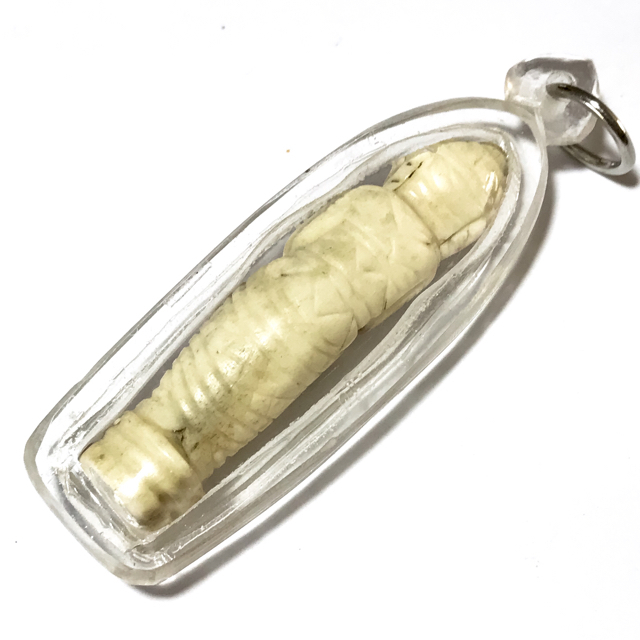 In both Bhuddhist and Brahmin Cosmological Pantheon, the four directional points of the compass have a Deity allocated to each direction. The deity allocated as the Lord of the North is “Taw Guwern” (Guberan), or more commonly known as “Taw Waes Suwann” (the word “Taw” meaning “Lord”). In Bhuddhist tales and Fables he is known by his Pali name Waes Suwann, or Waisarawan (Sanskrit).In both Thailand’s “Ramayana” and the original Hindu Brahmin Epic “Ramayana”, the name of this Being is “Lord Guberan” (Taw Guberan). Apart from this, The Lord of all Rich Fortunes and the Northern directions has other names, such as Tanesworn, Waisarawan, Yanksaraja, Raaksentorn, Ratanakan, and Aitawita (son of Itawata). 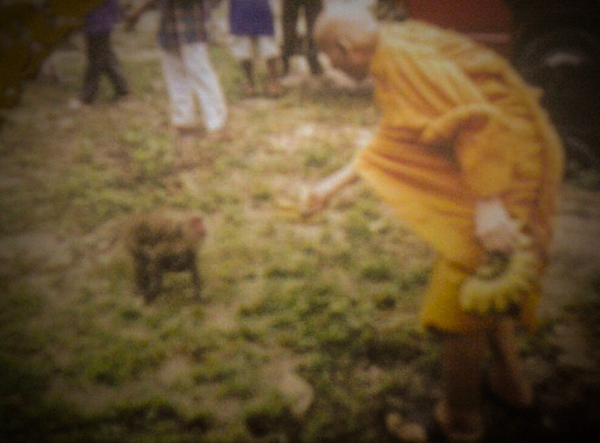 Luang Por Lae Tidtappo of Wat Pra Song in Petchburi, was a direct Looksit apprenticed in Dhamma and Sorcery to two of the Greatest Masters of Olden Days, the legendary Luang Por Tong Sukh of Wat Tanode Luang, and Luang Por Plern of Wat Nong Mai Luang. Luang Por Lae was born in the year 2459 on the 19th June, in Tambon Rai Makham in Ban Lard, Petchburi Province. He was ordained into the Buddhist Sangha at the age of almost 20 Years old on the 24th of May 2499. 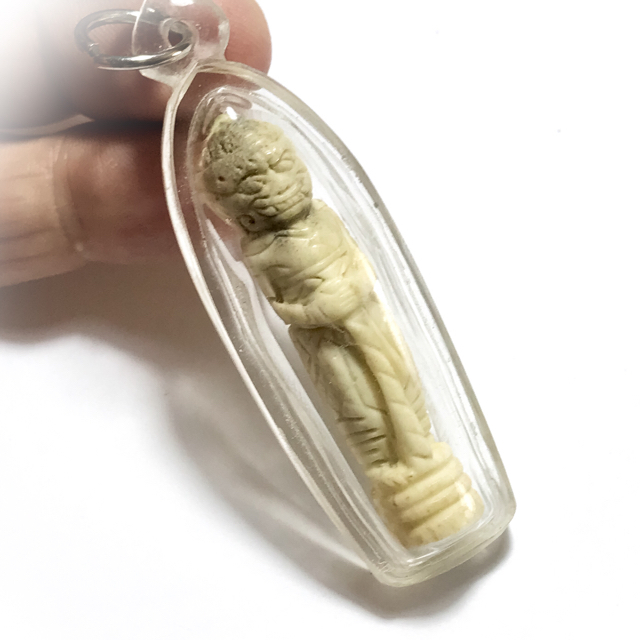 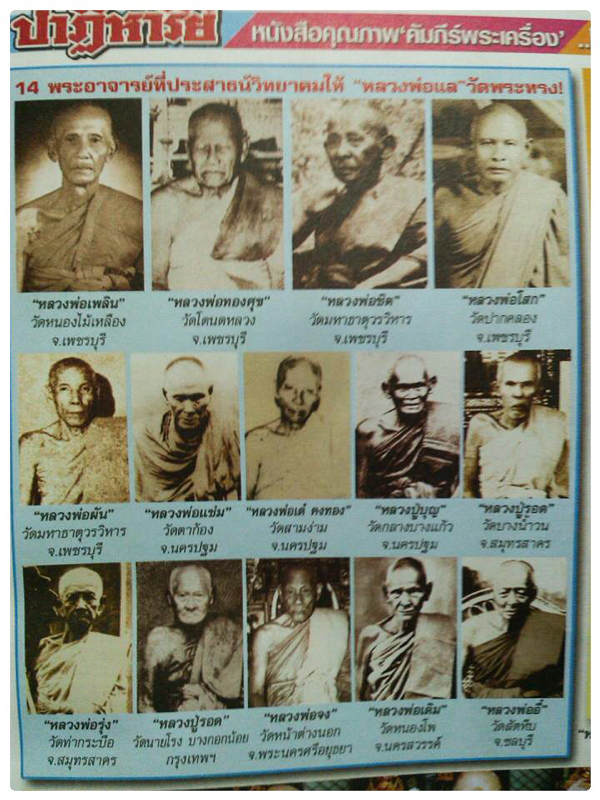 The Great Luang Por Plern of Wat Nong Mai Luang, Famous for Wicha Hwaen Pirod, and Kong Grapan Magic passed on his magical secrets to Luang Por Lae. Luang Por Tong Sukh, Wat Tanode Luang, who taught him to perform Wicha Sak Yant Kroo, which was the most powerful Yant in his particular Magical Dtamra, namely the Yant Hua Jai Pra Ram (Heart of Rama Yantra), which controls the powers of all other Yant which are tattooed thereafter on the devotee, including the Ling Lom Vanora, Hanuman, & Gold and Silver Hongsa Swans. 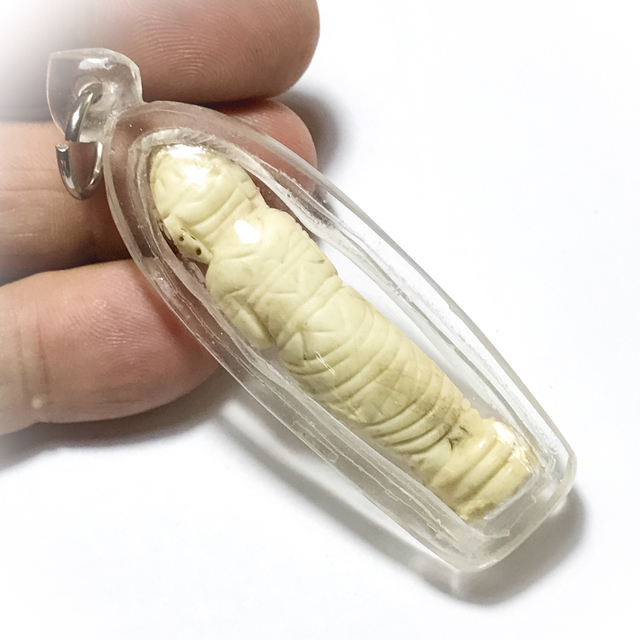 He was taught the Wicha Sak Yant Maha Maekh from Luang Por Dtor and Kun Por Jantr of Wat Khao Wang in Petchburi, and after their passing, for a long time, Luang Por Lae remained the only Monk able to perform this Wicha.

In the year 2489, an event happened that caused Luang Por Lae to recieve a shock, as he was staying at Wat Maha Tat, where some terrible news about his family home had been broken into by marauders, who killed his mother and siblings (his father had already passed away beforehand). The only thing left in the home was a piece of gold weighing 100 Grams which the thieves had dropped as they fled the house, which Luang Por Lae had to use to cash in to pay for the funerals of his mother and siblings. 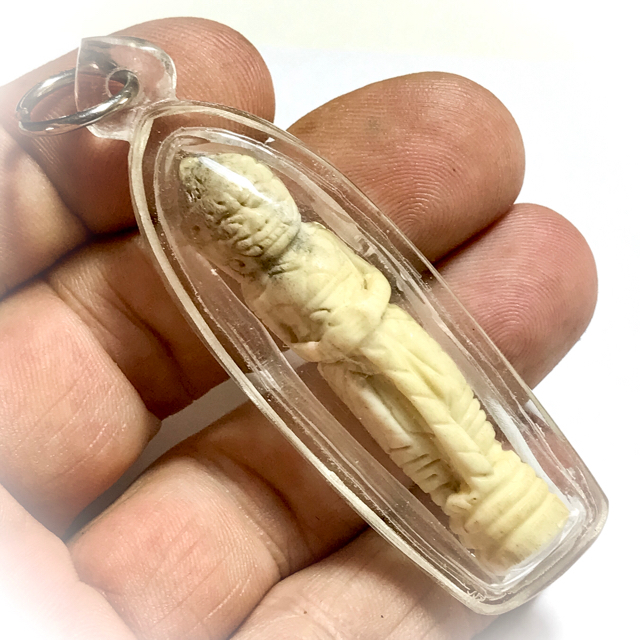 Because of this sad event, Luang Por Lae decided to go and practice Tudong solitary forest wandering on foot, throughout the land. He decided to do this in order to master powerful Wicha, in order to be able to help people in future to prevent such terrible events from happening, and to be able to perform magical miracles to protect people from being harmed, as his own family had been.

He wandered through the then still wild and undeveloped areas between Petchburi and reached as far as Nakorn Pathom province on foot, and met with and practiced many forms of Wicha with various great Masters of that time, in particular, the Wicha Kala ta Diaw Rahu Om Jantr (one eyed coconut Pra Rahu Maha Ud Gunstopper spell), and the Wicha Serm Duang Karma Improver spell of Luang Por Chaem, of Wat Ta Gong. 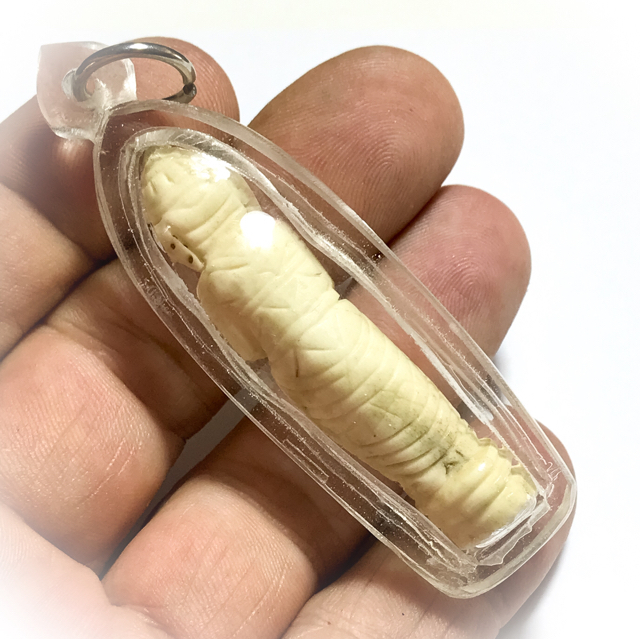 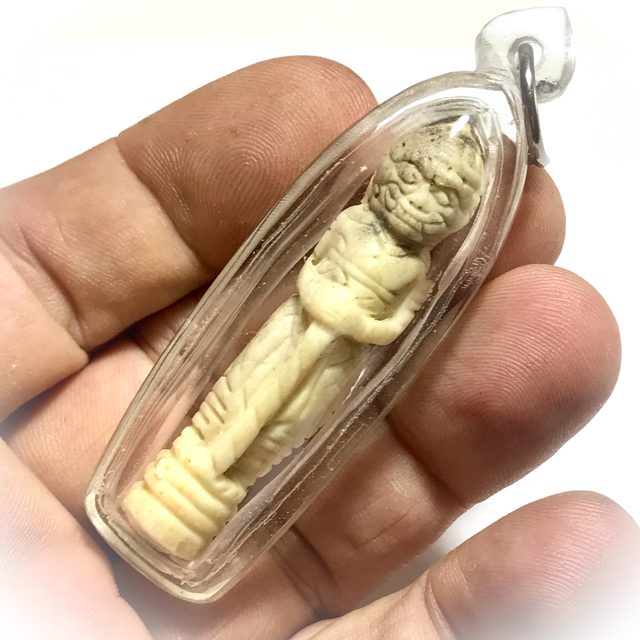 Then he travelled even further into the Province of Ayuttaya, and learned the Wicha Takrut Puang, and the Wicha of the Yant Hua Jai Pla Tapian Maha Lap from the Great Luang Por Jong of Wat Na Tang Nork. And even further on he travelled Northwards to Nakorn Sawan, to Master the Wicha Sastra Mitmor Ritual Knife making, with the Legendary Luang Por Derm, of Wat Nong Po.

Then he travelled back Eastwards, to learn the Wicha Palad Khik with his Kroo Ba Ajarn Luang Por Ee, of Wat Sattaheeb. Luang Por Lae then went back to Petchburi and used his Wicha to help the Local Devotees, and later became Abbot of Wat Pra Song. 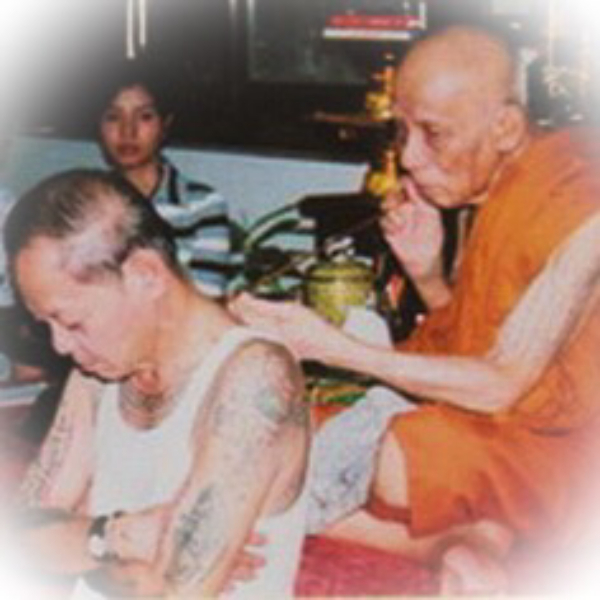 Luang Por Lae was famous for his Sak Yant tattoos with his special formula of Nine types of Hanuman/Vanora. However, it is said that after the occasion of having tattooed a 'very important person' he desisted from tattooing the 9th Hanuman and Hanuman number 10, and only would tattoo up to 8 of them on any one person. His amulets are a cult niche collectors material, and are always difficult to find,for it is indeed true, that his Devotees in Petchburi and surrounding province, are so possessive and non commercial with them that only few amulets from this master ever get to leave the locality, and have mostly been kept within the fold of his parishioners. 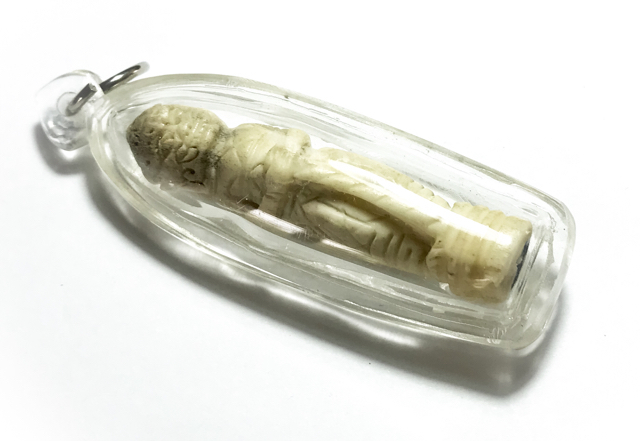 He is of course an especially revered master to those who are devotees of sak yant tattooing, and of those who have become enchanted with the many forsm of amulet he made during his lifetime, such as a large array of Hanuman amulets, Ganesha, Taw Waes Suwan, and Por Gae Lersi amulets which were made frm hand carved ivory. He has one of the more attractive pantheons of amuet designs within his magical trajectory, and many of his amulets are considered to be pieces of fine miniature Buddhist art in their own right.

He is also a highly regarded historically famous master, due to the fact that he learned underr tutelage in Sorcery and Dhamma, from the incredible number of 14 other great Guru Master Ajarn, who bestowed him with their Wicha. 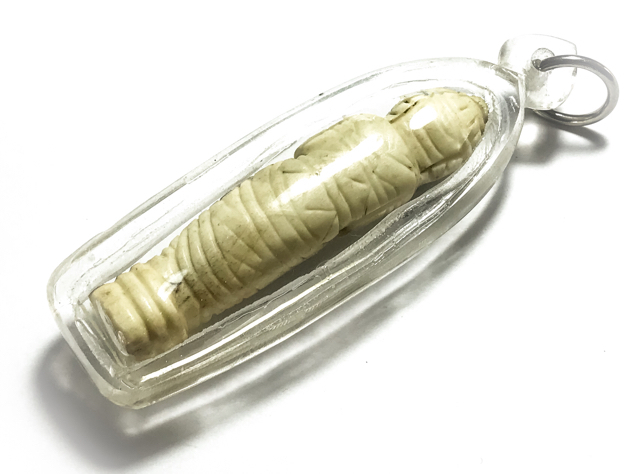 The real name of the Kata is Aadtaanathiya Paritta - It is the Kata used for a Major Portion of the Suad Pan Yaks Thai Brahman/Buddhist/Occult ceremony to speak with the Asura Kings of the Jadtumaha Rachiga Realm, and request protection and auspicious blessings.

May i offer reverence and Bucha to Pra Gonaakomana Putta Jao, who has risen above all defilement, and who resides in the Brahmacaryas

May i offer reverence and Bucha to Pra Angkeerasa Putta Jao, the Splendrous Son of the Sakya tribe, who relvealed the Dhamma to the world which is the ultimate tool for the removal of all suffering

The Self Enlightened one uncovered and taught the Dhamma, which is the greatest tool for the removal of suffering

The Angels and Humans may revere and Bucha these Buddhas who asre endowed with great Metta which they send to release the Devas and Humans in heaven and on the Earth from suffering.

They are full of Wisdom and Knowledge of the World, those Great ones who are free from instabilities

May i offer reverence and Bucha to Pra Putta Jao Kodtama Kodtara, who is Adept with Knowledge Wisdom and Grace. 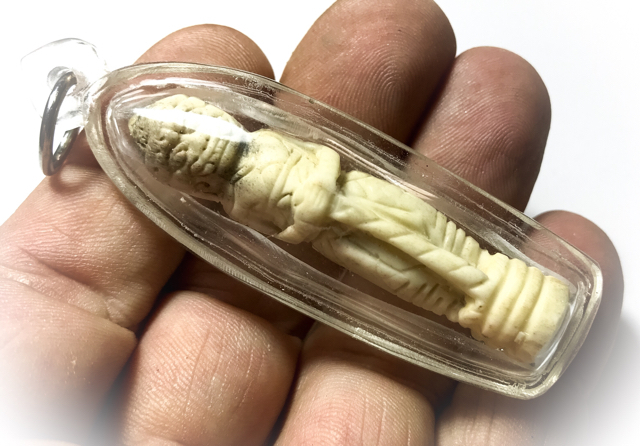 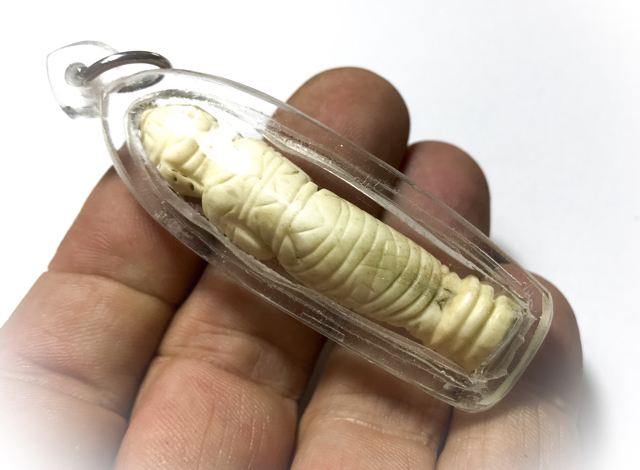 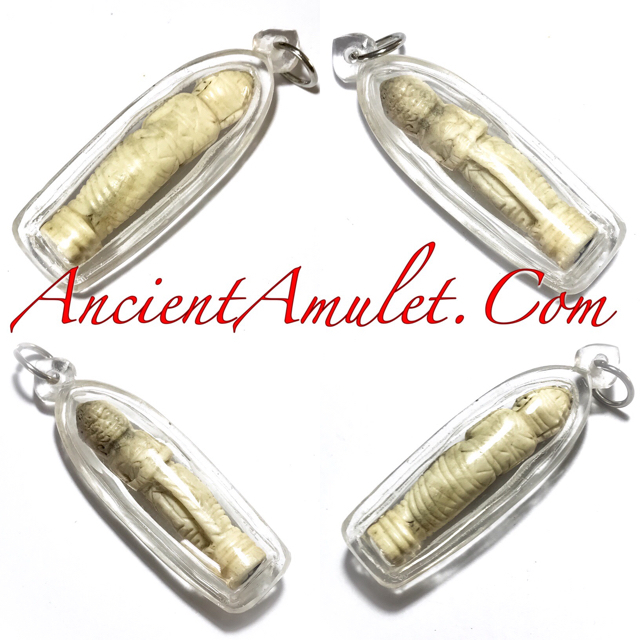