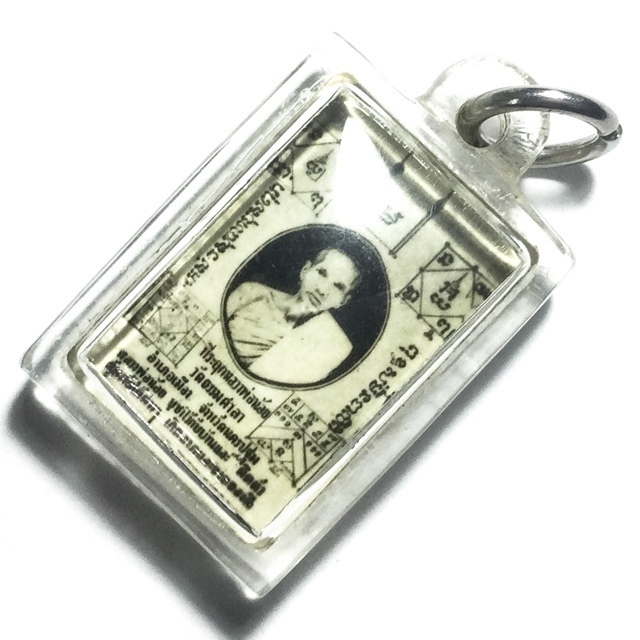 The Photo is on old black and white photographic paper and was blessed by Luang Por Noi in 2505 BE, and is a rare opportunity to have a magical tool of connection with the Guru, in such pristine condition. 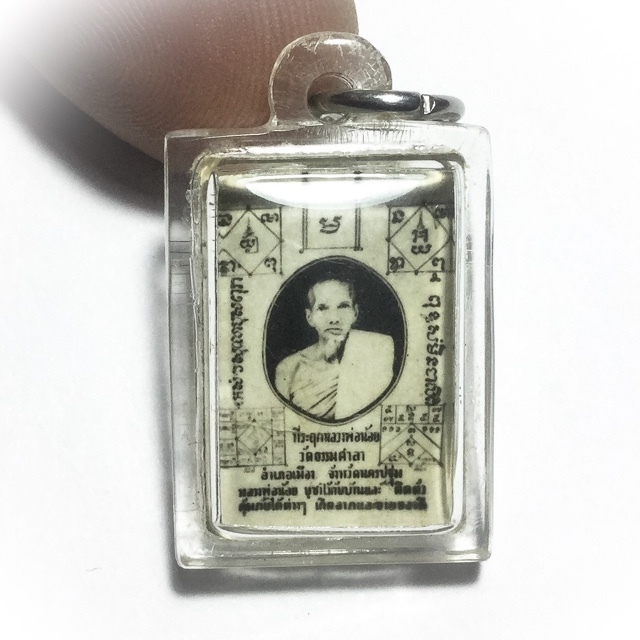 The rear face of the photo reveals true age and authenticity; the surface is highly porous in texture, and has developed the typical bulges and texture that is ubiquitous with this particular kind of black and white photographic paper, and which is one of the reference points for identification and age estimation of the amulet. 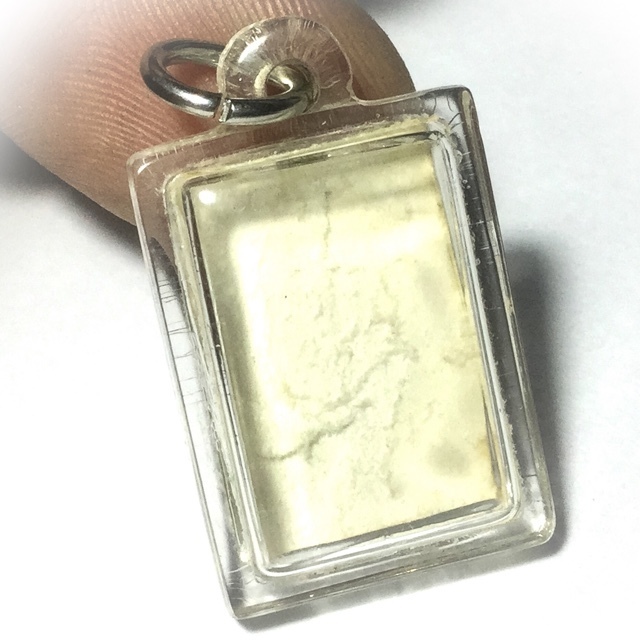 Luang Por Noi was a resident of Dhamma Sala Municipality from birth. He was born in the 12th May 2426 BE, as the son of Mr. Saeng, and Mrs. Orn. When he was still a very young child, his father took him to the temple, and he spent most of his childhood years learning to read and write and other schooling, with Luang Por Nuam, the Abbot of Wat Dhamma Sala.

When he reached the age of 15, he ordained as a Samanera Novice monk at the temple of Wat Sam Graber Phueak. Luang Phu Noi would constantly travel between his temple and the temple of Wat Dhamma Sala where he had grown up during his childhood under tutelage of Luang Por Nuam. 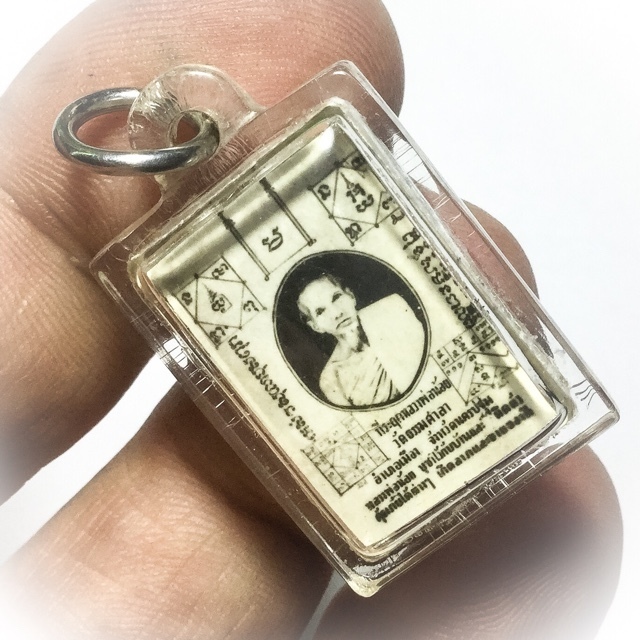 After some time, Luang Por Noi's Mother became old and weak, and he disrobed to help her at work, as she was having difficulty. When his mum retired and he reached the age of 20, he re-ordained at Wat Dhamma Sala, on the 28th May 2446 BE.

Pra Atigarn Luang Por Tong, of Wat Lamud was his Upachaya Ordaining Officer, with the Abbot of Wat Dhamma Sala as his Gammawajajarn. , and Luang Por Saeng of Wat Mai, was his Pra Anusawanajarn (Witness). He recieved the Ordained Pali name of 'Intasaro', and was from then on truly known as Luang Por Noi Intasaro. 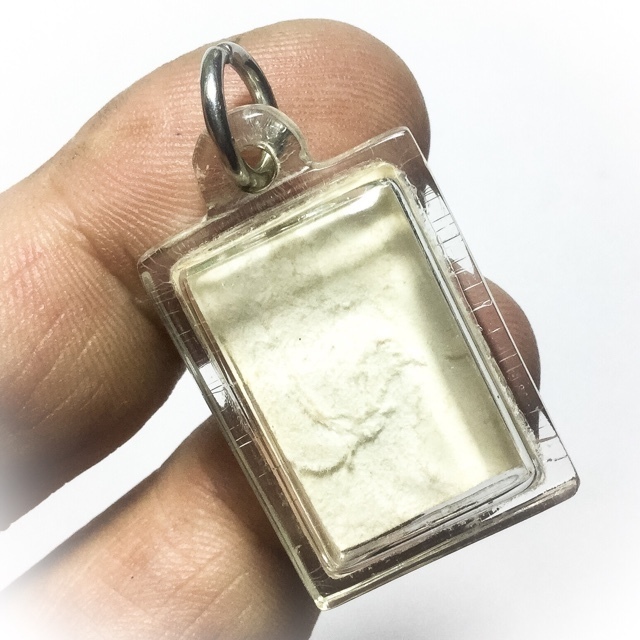 After his second Ordination, this time as fully fledge Bhikkhu in the Buddha Sasana, he began to study and practice the Dhamma Vinaya Buddhist Canon of Ordained Life with great exertion and diligence. He also began to beseech and study the practice of Wicha Akom Buddha Magic with many great Masters of the time, including Luang Por Tong of Wat Lamud, Luang Por Nuam his old Kroo Ba Ajarn of Wat Dhamma Sala, Luang Por Jaeng, Luang Por Saeng, and many other great Masters. 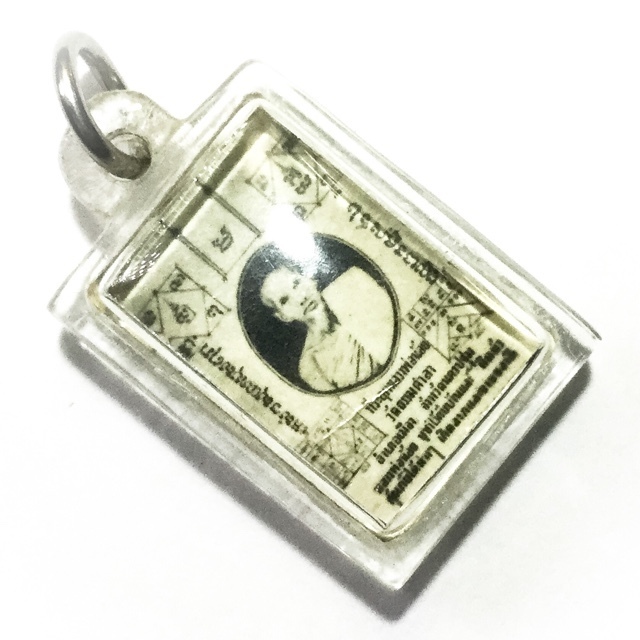 He was able to absorb and master the many spells and formulas of the Wicha given to him, because he had learned how to read and write the Sacred Khom Agkhara script since a very young age with Luang Por Nuam. Luang Por Noi's powers and abilities to enter deep Medidative States became highlyt adept, and his prowess soon came to be known by his Mentors, who gave him ever increasingly difficult to Master Wicha, which he seemed to absorb instantly and Master with ease. 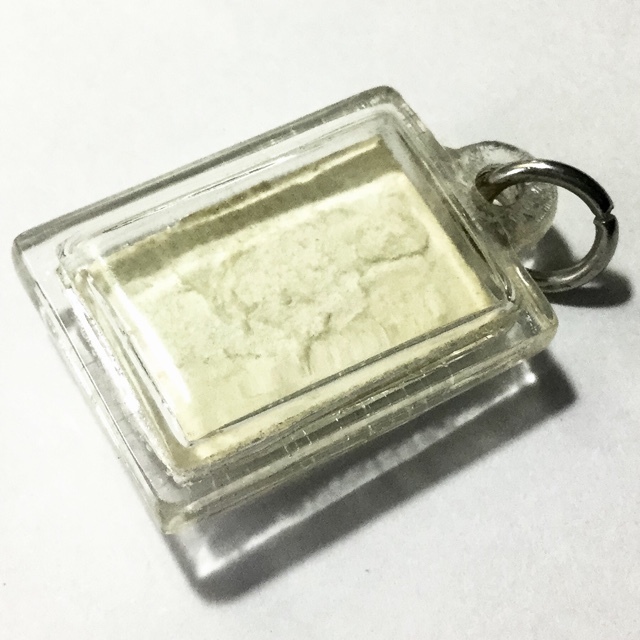 Luang Por Noi was known for his well kept and diligent manner of self conduct, and restraint, and that he would never let his watchfulness of his own behaviour slip, always remaining within the rules of Ordained Monks, with mild manners and compassionate openness. He became a symbol of faith for the local devotees of the Province. 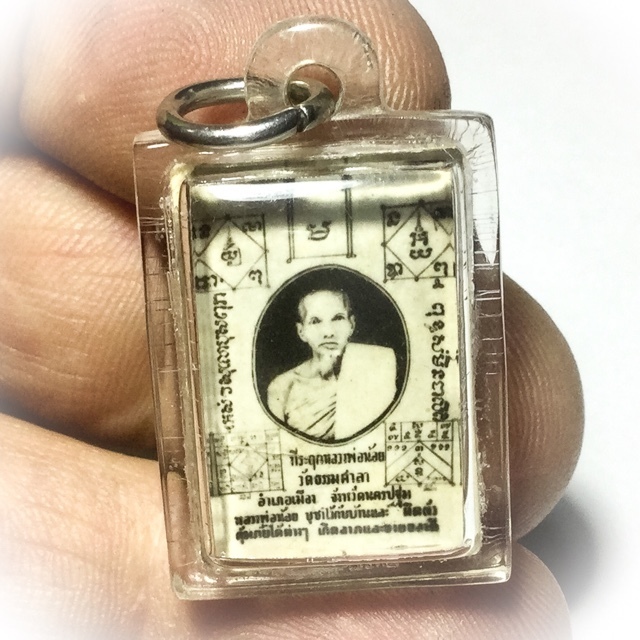 He showed compassion to animals in need, and liked to seek solitude and silence, remaining in the peace of stillness, which he radiated outwards to those in his presence, stilling the troubled hearts and bringing them some peaceful respite from their daily sufferings.

In the year 2495 BE, Luang Por finished the construction project for the public primary school building of Wat Dhamma Sala for the local children to get some education. In 2501 BE, Luang Por built the Uposatha Shrineroom. 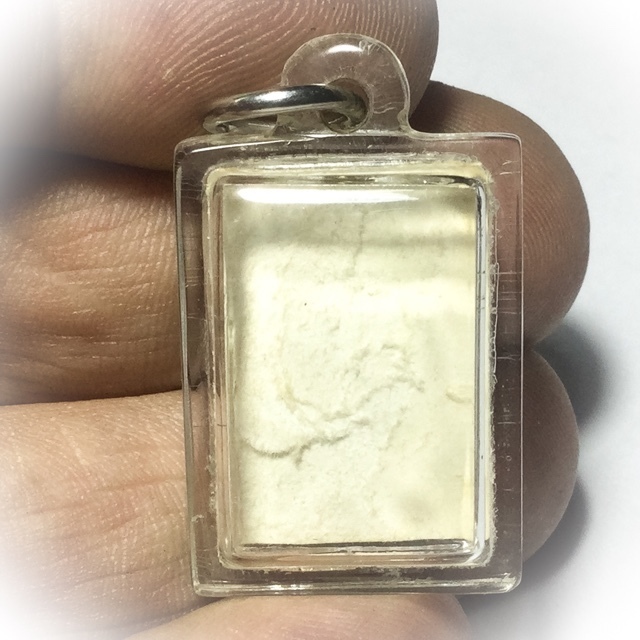 Luang Por Noi built a concrete bridge for local market traders and folk to travel across the river easily and save them many miles of traveling distance. This improved the trade and economy of the municipality greatly, for which the local folk became ever more filled with faith for Luang Por Noi.

One curious fact is that Nakorn Pathom Province enjoys having had two famous Guru Monks with the name of Luang Por Noi, both of whom are extremely famous for their amulets. This sometimes causes confusion with students of amulets who are still developing their knowledge, and so we define who is who here, for your information;

Luang Por Noi of Wat Dhamma Sala was often invited to the most important Buddha Abhiseka blessing ceremonies because of his great prowess in empowering amulets. He had (and still has to this day) a large following of devotees, who sought his protection and blessings. But Luang Por Noi did not officially make an edition of amulets, until the year 2494 BE, when a large number of devotees gathered and asked Luang Por for permission to bless a series of coin amulets, to distribute to his devotees to worship with. 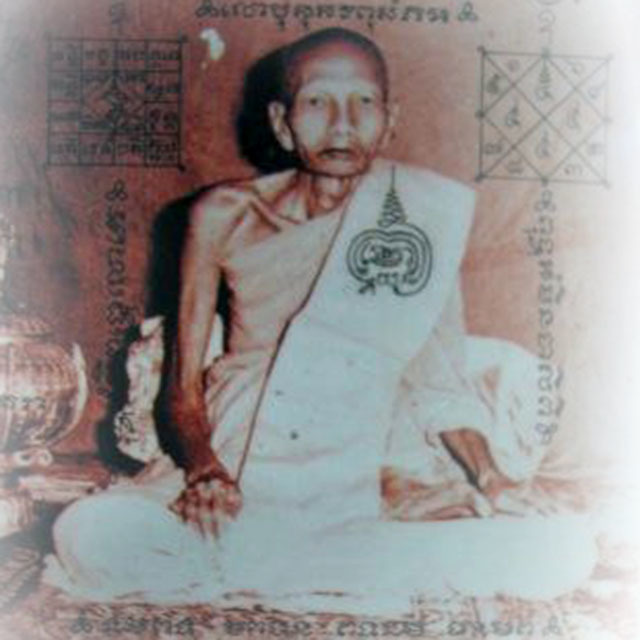 Luang Por Noi was approached and asked, but in truth, he did not reply, and remained silent. This however was taken as a yes by the devotees, who then commissioned am artisan to create a design for the coins, with the image of Luang Por Noi, within a Sema (shield shaped) coin.

The first edition coin had a cameo image of Luang Por Noi (head and shoulders) on the front face, with the words 'Luang Por Noi. The rear face had the Yant Na Bpathamang. 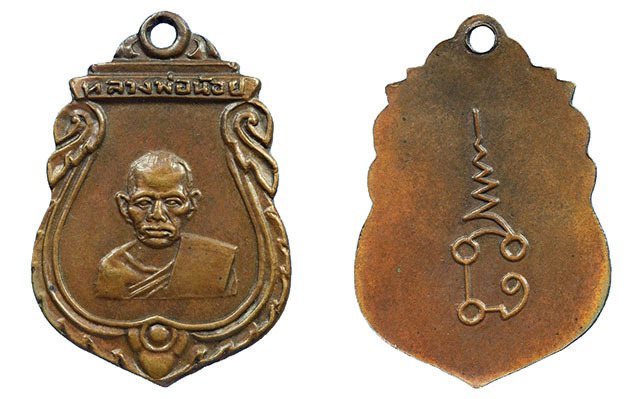 This first edition coin is less known by common people as the later released Rian Hnaa Suea, which in itself is a very rare and expensive amulet (reaching into the 2-3000$ range in good condition), but it is this Rian Sema 2494 BE which is in truth the first edition he ever made, and is even rarer, and can often fetch an even higher price than the Rian Hnaa Suea. 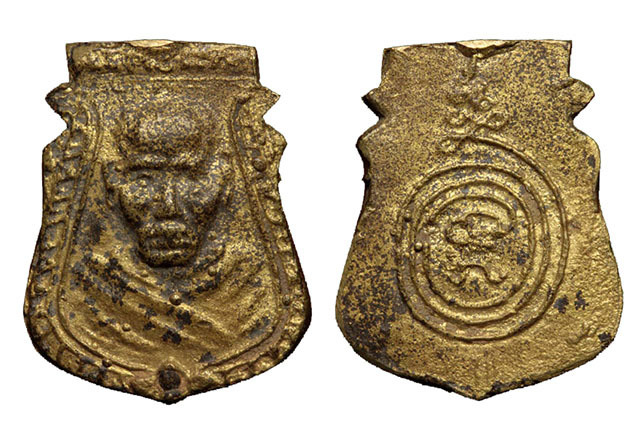 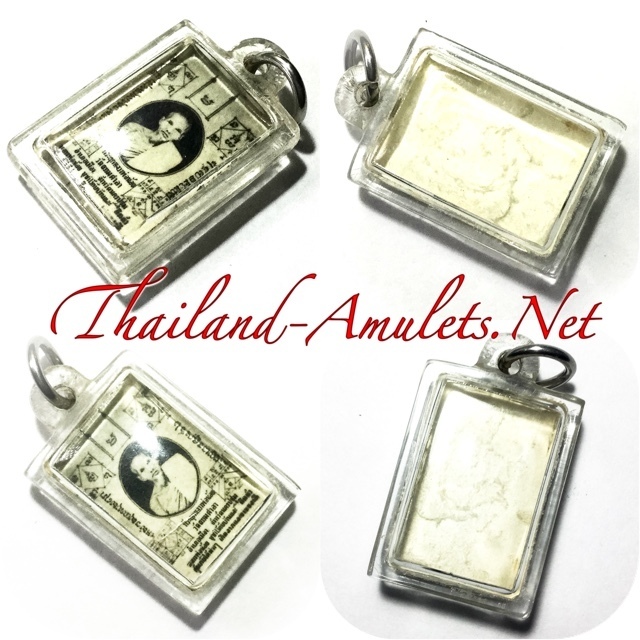