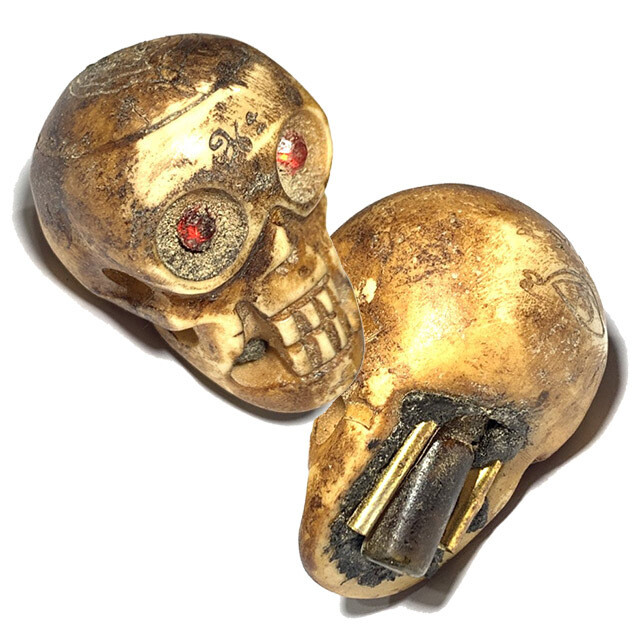 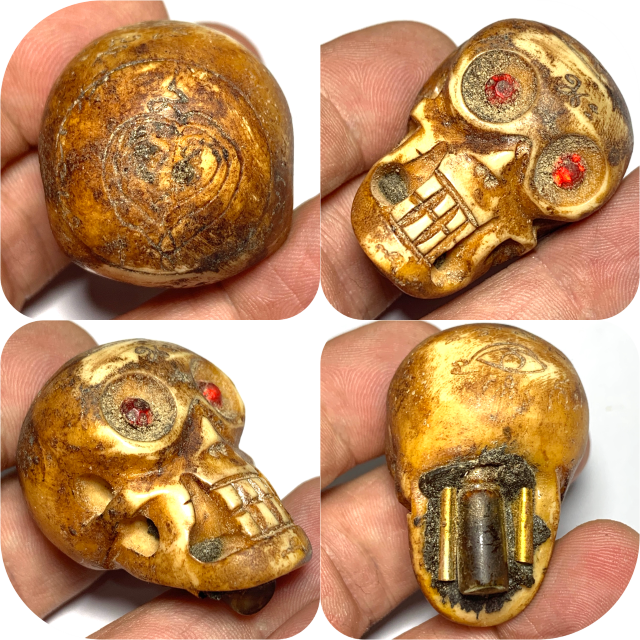 The Prai Grasip is empowered with the instantly recognisable hand inscription of Yant Hua Jai Na Ok Dtaek in Khom Agkhara from Luang Por Pina. An extremely rare Individually carved Ancient Amulet from Luang Por Pina of Wat Sanom Lao, which is highly preferred by gamblers, and those who seek nocturnal activities, or need forewarning of lucky streaks or impending dangers. 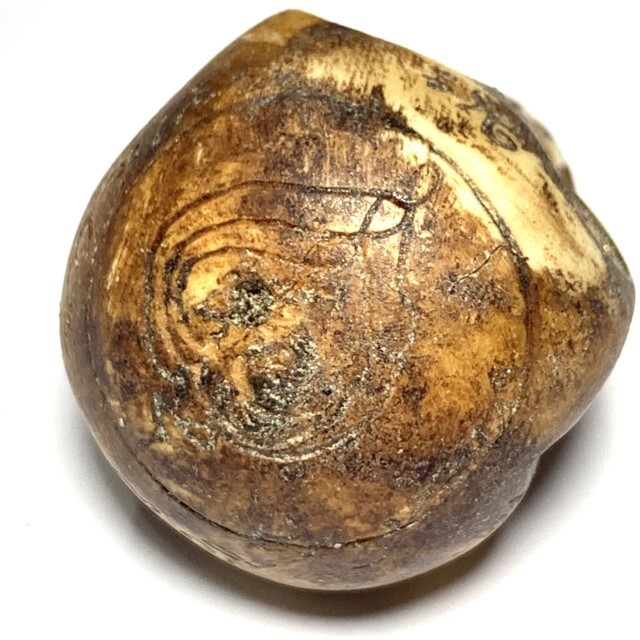 This exhibit is a particularly desirable and attractive example, and is doubly rare for the fact that not only does it come from Luang Por Pina, but that such Necromantic Bone Carvings, and especially with a phial of Luang Por Pina's Nam Man Prai T ang Glom, are a rarity that can hardly ever be seen in the present day.

Below; a phial of Nam Man Prai Phii Dtaay Tang Glom is inserted into the Nuea Krang Pasom Pong Prai Muan Sarn Powder Base. This kind of Nam Man Prai Oil is extracted from under the chin of a corpse of a person who ‘died screaming’ meaning the person died in fear or stress, before their time, in unnatural circumstances. This term is also used for ‘Phii Dtaay Hoeng Tang Glom‘, which is a variation that requires the corpse of a woman who died unnaturally (Dtaay Hoeng), during pregnancy, with both mother and child deceased in the process, and buried alive together. 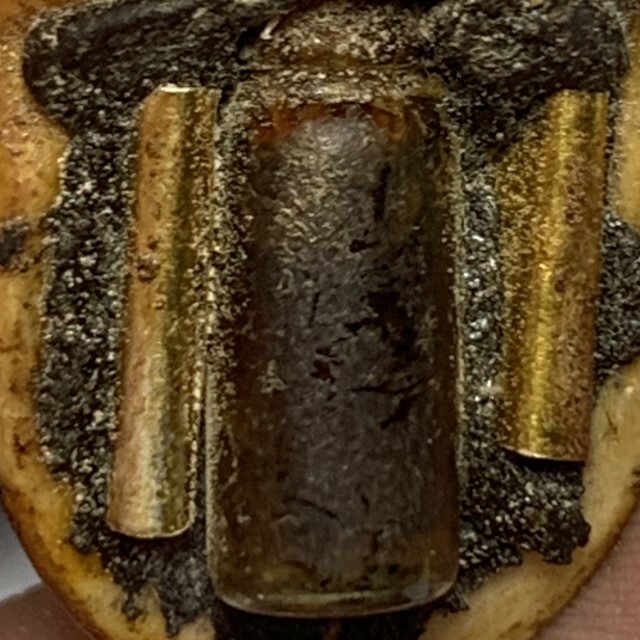 Free EMS Express Airmail registered Shipping Worldwide is included with this amulet. The oil is extracted using Ritual Necromantic Sorcery methods performed by a ‘Hmor Phii’ (Witch Doctor) Necromancer in a Graveyard, by subduing and appeasing the ruling guardian demon of the cemetery to give permission to enter and perform the ritual extraction from one of the corpses within the cemetery.

The ritual is first performed, and if successful, the Necromancer will take his team to help dig the grave, but before this, he must remove the two curses and find the one true key enchantment which he needs to destroy to be able to raise the dead from the grave. 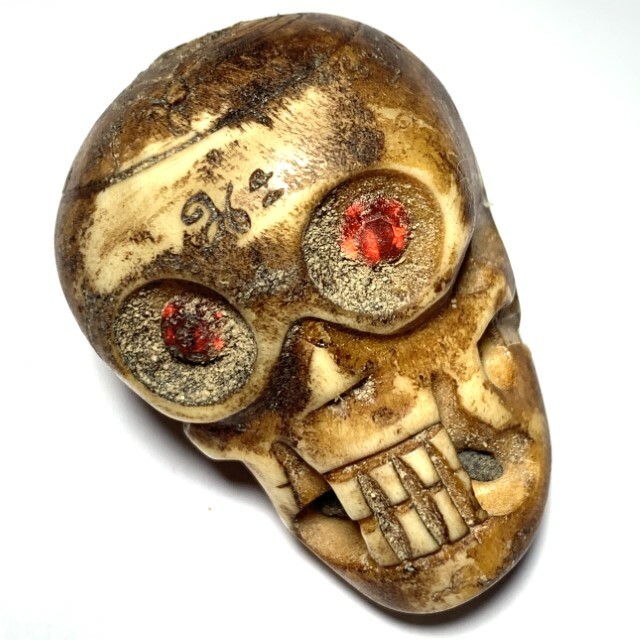 Once he finds the three hidden stones, two of which are inscribed with fake spells, and only one which hjas a true curse within it to prevent grave robbers, and to prevent the ghost in the grave from escaping, the Necromancer will deactivate the spell, and get his team of helpers to dig up the coffin. 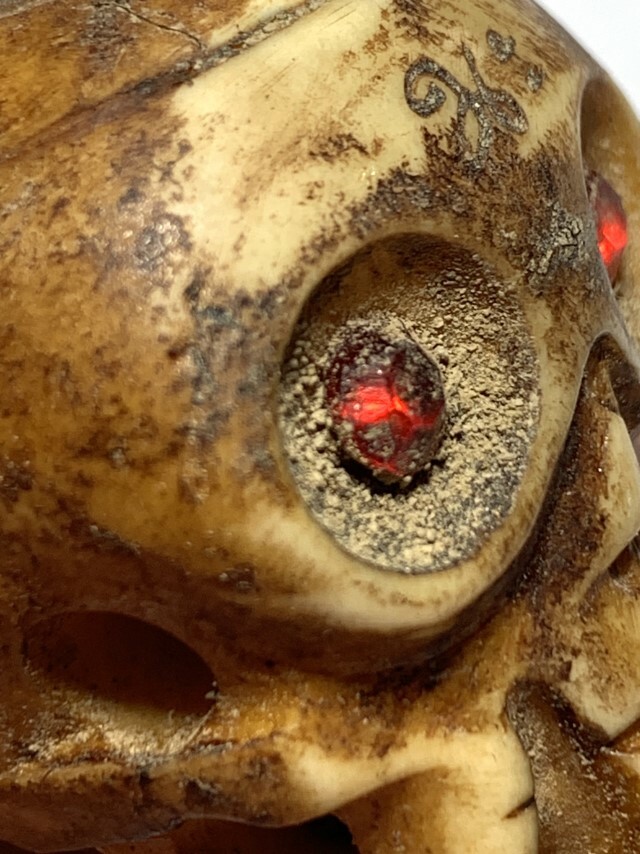 The helpers must then stand back at a distance, as when the coffin is opened, the spirit of the angry Phii Dtaay Hoeng flies out and looks for a victim to launch its anger at, and must be subdued by the Necromancer to obey and serve the Buddha Dhamma, through empowerment of amulets to help humans.

Once this is achieved, the Necromancer then raises the corpse and uses a candle flame and a receptacle to heat under the chin of the corpse where the oils have gathered, and drip them onto the receptacle, for later dilution with other herbal based Prai Oils, or for mixing with Muan Sarn Sacred Powders and Bone Powders of Kumarn Tong or other necromantic animist charms. 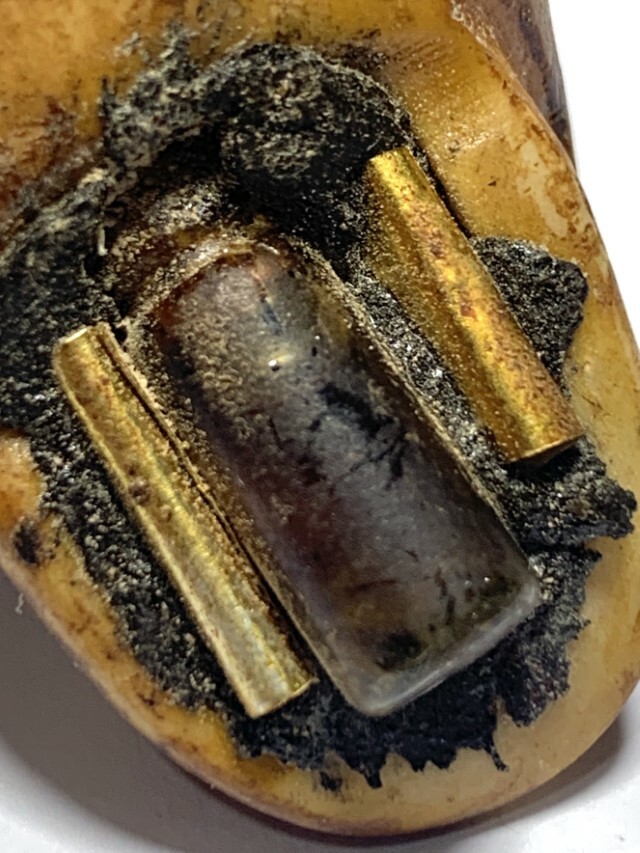 It is in any case extremely difficult to find one of these 'Krueang Rang' Occult Charms from Luang Por Pina in any circumstances, but to find one of such beauty, with such visible inscriptions and expert carving, is especially lucky to encounter. The amulet possesses the Serm Duang Power of Buddhakun Buddhist Incantations and the secret formulas of Luang Por Pina, which contain Powerful Buddhist meanings encoded within them. A massive repository of attributed Buddhist Blessings of very sacred and Auspicious Influences on the Forces of Karma are imbued.

Below; the Letter 'NA' for Pi-NA is inscribed on the forehead of the Prai Grasip, also representing of course Na Metta, for Mercy Charm, and the Na Bad Talord, which forewarnsม and protects from dangers. 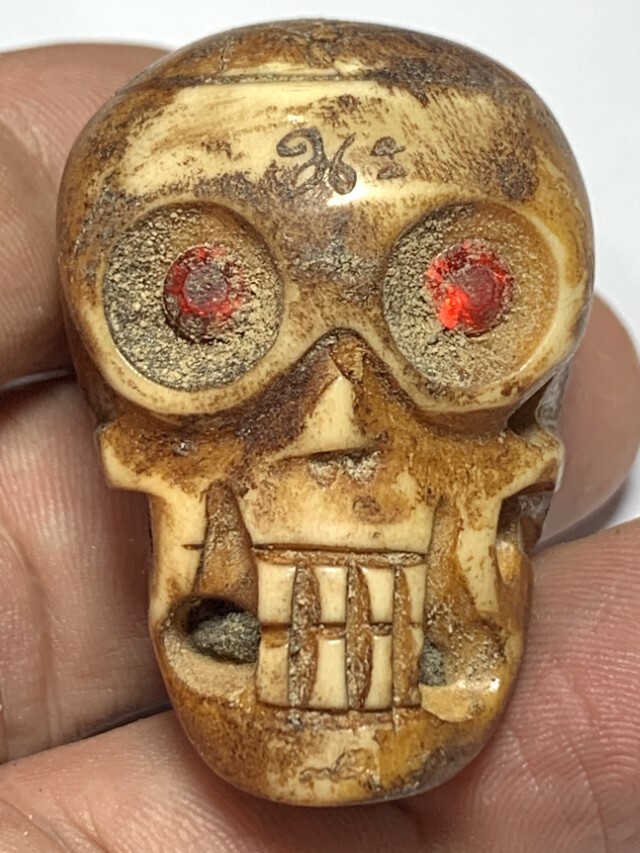 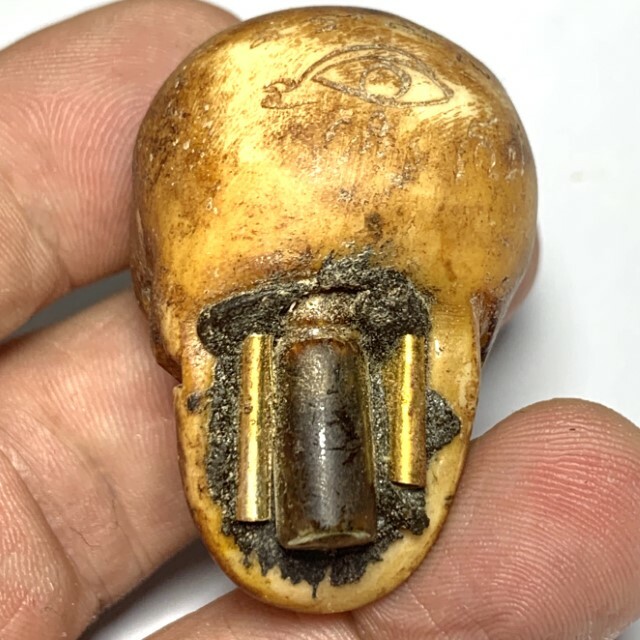 This amulet is a very recognisable and distinguished exhibit with the clear to see presence of Luang Por Pina's Sorcerous Wicha. One can see the use of Enchantments Embedded with sacred Inscriptions, each empowered with the corresponding Buddhist Kammathana Invocations aligned to their sequence of attributed meanings and powers of transformation, according to the Wicha Prai Grasip, Siang Choke, Wicha Maha Lap, and Wicha Maha Pokasap. 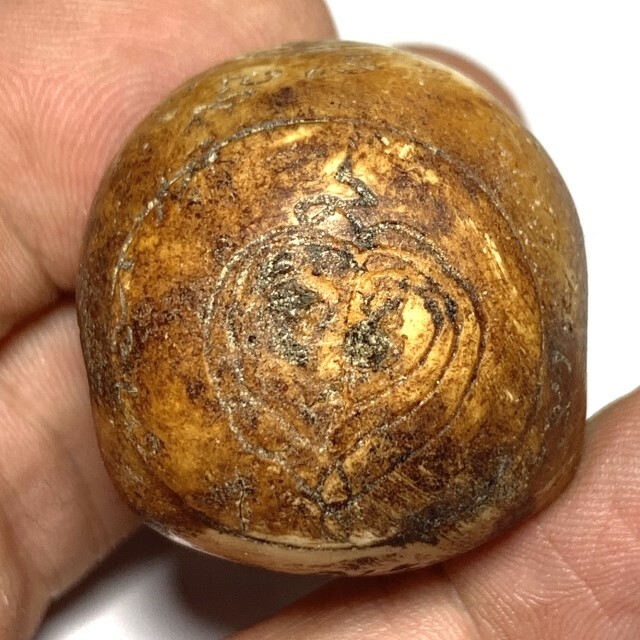 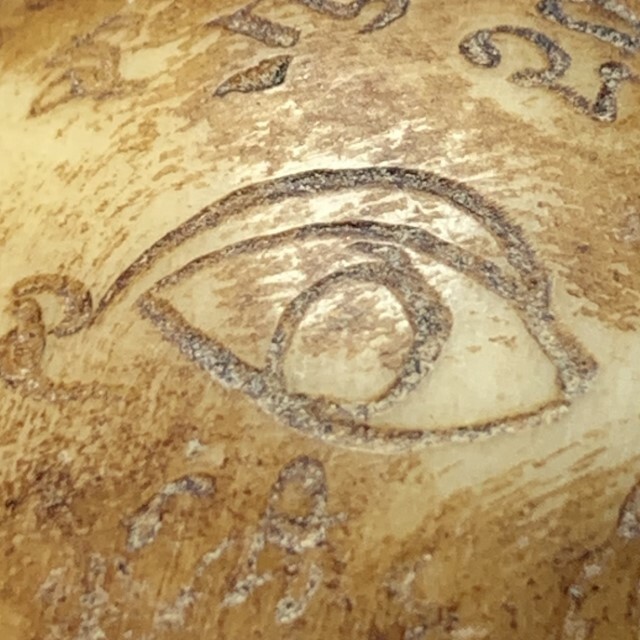 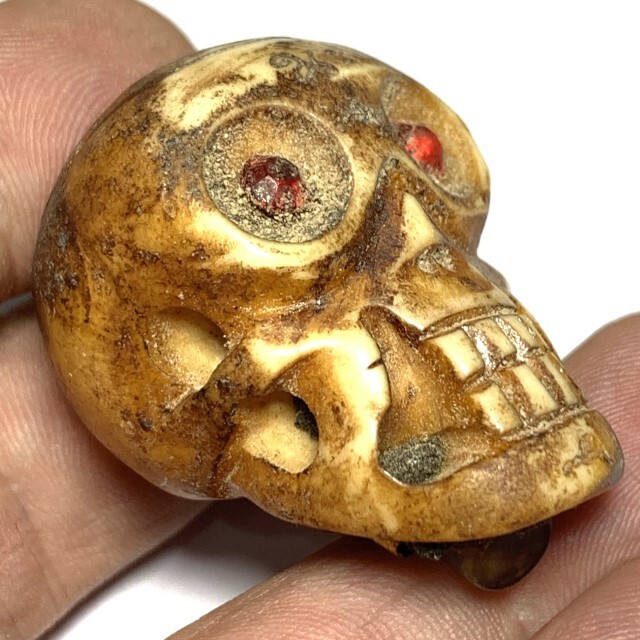 The Magic ring will bring respect and commanding power, and improve chances of promotion of status, wage increase and attract treasured possessions, as well as (according to the beliefs of gamblers) help in turniing the tables in the gambling dens. 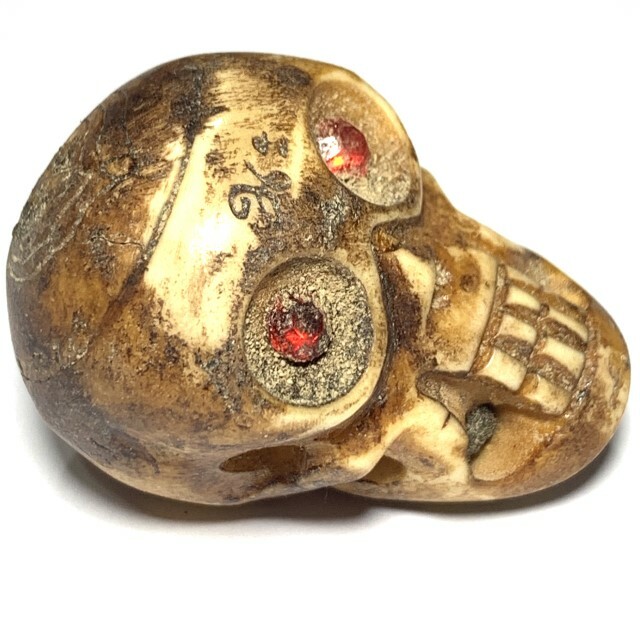 Luang Por Pina was most famous for his Palad Khik Hua Chamot, Sacred Powder two sided Buddha Amulets, and his Daw Nai Pan/Mae Nuea Horm Lucky Star Amulets, but in truth made a vast number of powerful and highly individual Wicha, such as the Duang Ta Pra Isworn, Paya Tae Krua, Prai Grasip, Yoni, Mae Bper, Takrut and other charms. His Daw Nai Pan is legendary and has a very deep meaning to it, which we recommend learning about; 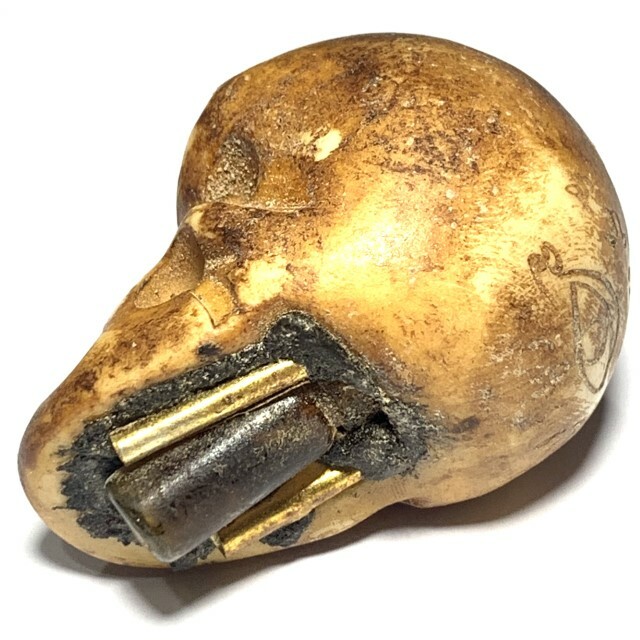 HOW TO USE NAM MAN PRAI

If you listen to the three quarter of an hour talk and explanation of the Sacred Daw Nai Pan, along with a short Biography of Luang Por Pina, recounted and narrated by Amulet Expert Ajarn Spencer Littlewood in the Podcast found below.

For indeed, in its highest level of Bucha, this amulet is a powerful tool not only to increase your Fortunes and Improve your karma in a worldly sense, but can be used as a contemplative focal point of self transformation and empowerment of manifest Buddhist Kammathana Meditative Practice. It points to the path towards enlightenment, and can assist you in walking the path, if this is your intention, and leads far above and beyond simple worldly desires. We invite you to listen to the podcast at the foot of this article, and be amazed at the depth of meanings within the Star Amulets and other mysterious Wicha found within the Magical Charms of Luang Por Pina. 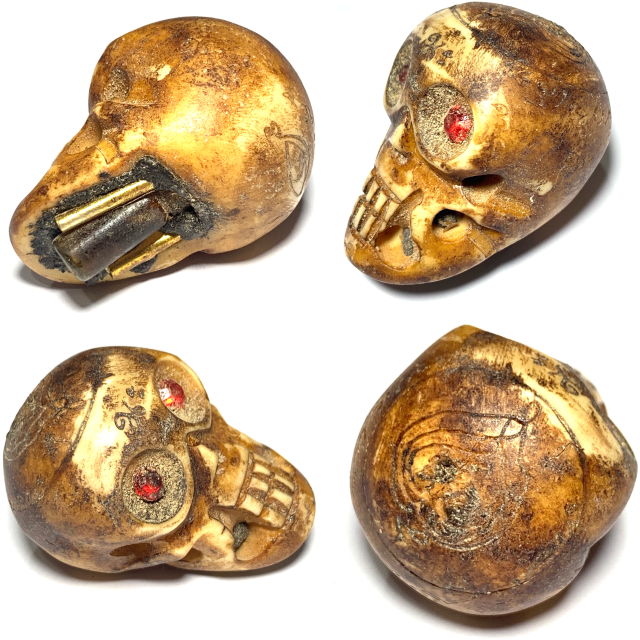