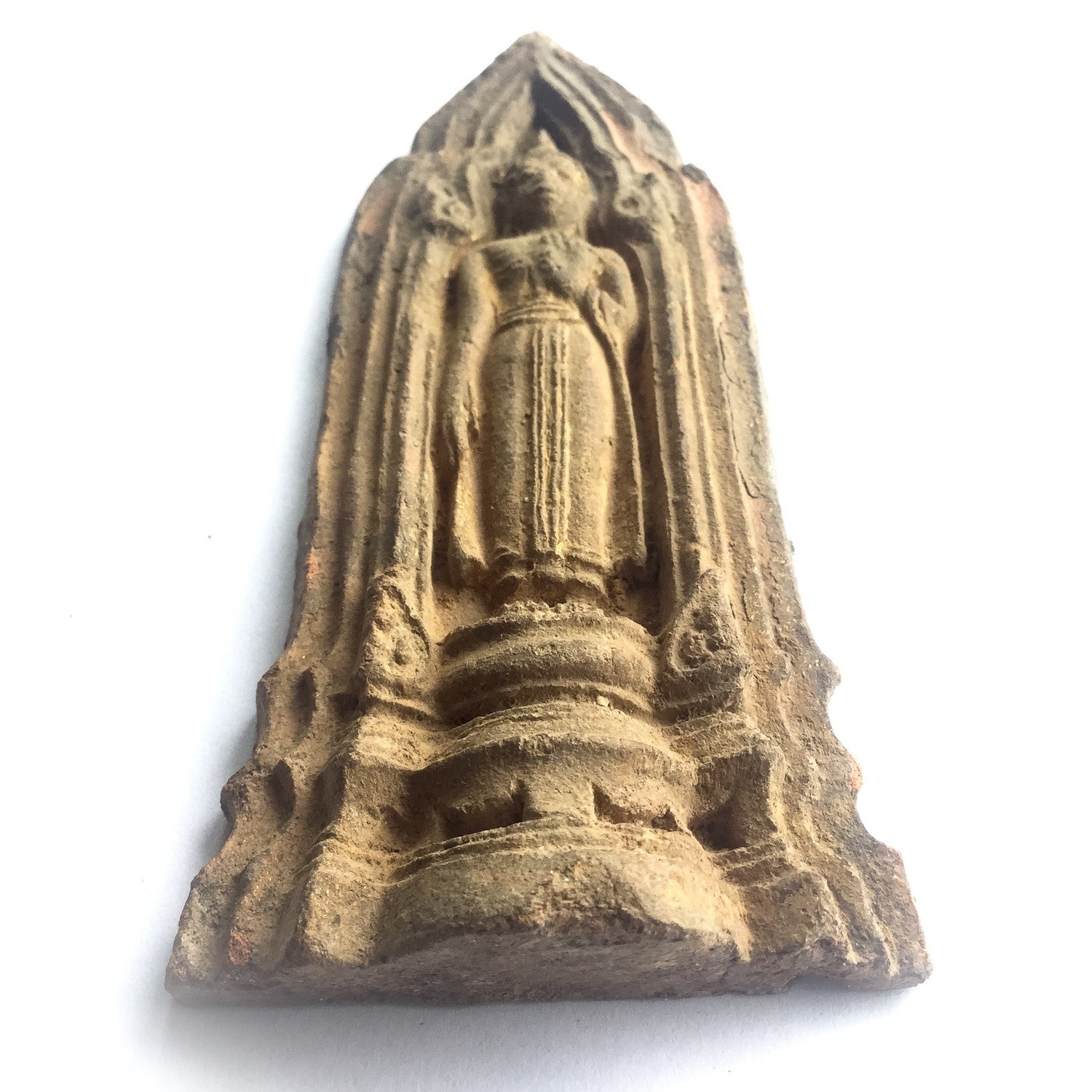 The first discovery of these hiding place Amulets occurred in the time around 2430 BE, during the reign of his Majesty King Rama 5. His Majesty the King had ordered for the construction of the national Museum the area of the Royal Palace in Bangkok. Various other major discoveries included the Temple of the Golden Mount, and Wat Pai Lom, where a batch was found under the Pra Pratan main Buddha Image in the Kuti Chamber of Luang Por Poon, where they must have been hidden at the beginning of the Ratanakosin Era.

The first ever find of these amulets however, were discovered in the ceiling above some of the throne seats such as the Rong Pra Tinang Siva Mukh Throneroom, and the Putai Sawan Throneroom.

Of those amulets found within the palace, most of which were made from Leaden Silver Mercurial Alloy, a large number of them were taken and sealed once more within the golden stupa of the Temple of the Emerald Buddha. Then, during the celebrations of 150 years anniversary of the city of Bangkok. They were moved to be stored beneath the 'Kone Dton Samor Pipek' (trunk of the ancient sacred Samor Pipek tree).

This Particular Exhibit Measures 10.5 Cm High x 5 Cm wide at the base.

Most people forgot about their existence, until they were discovered beneath the tree and then reentered circulation. They were taken by Jao Khun Vorapongs, and given the name they possess today, after the place where they were rediscovered at the 'Kone Samor' (Samor tree trunk). Hence, the amulets are known as 'Pra Kru Kone Samor'.

The Pra Kru Kone Samor is a perfect amulet to study other famous clay amulets of Ayuttaya Period, such as the famous Pra Lp To Bang Grating Amulet, for the aspects and properties of the sacred clay, is representative of the same age and substance, and baking methods used. It can be said that the Pra Kru Kone Samor has many different color tones and textures to them due to the ancient baking methods and hand pressing methods varying the result of each individual votive tablet, which makes for a slightly difficult job distinguishing.

Various discoveries were found in the temple of the emerald Buddha, and at Wat Po temple. After the discovery of these amulets, most of them were taken into the care of the Ministry of Arts. But some of the employees and civil servants within the ministry took some for Bucha, and wearing. And hence, they began to get slowly noticed by the public, and once word got out and they became "the talk of the town", the Ministry of arts decided to release them for 'rental' (the Thai way of referring to the purchase of amulets), to the public.

So many people flocked to the ministry to receive these amulets, that the whole find was depleted very quickly indeed. After this word got out and this series became a nationally accepted and highly revered series of Ancient Sacred Thai Buddhist Amulets which I also have historical and national importance.

Also at Wat Pra Yura. However, only the baked clay Amulets were found in these of the temples. The silver lead smaller Amulets were only found in the Kru Wang Hnaa hiding place amulets discovery, the National Museum and Temple of Emerald Buddha. In any case these metallic versions, were so few, that most of them already have an owner who is not willing to part with his amulet.

Also, the very few which are still around, are also subject to a lot of fakery. It is the metallic smaller amulets, which have suffered from many forgeries and are very difficult to obtain, both because of the rarity, and all of the amount of forgeries.

The amulets themselves are found to be in various different forms, ranging from standing Buddhas, to seated Buddhas. The Buddha Images are seated or standing, within a crystal arch with Ganok Flame Decoration. These votive tablets are made in the artistic style of the Ayuttaya Period, most of them, are made from baked clay, and quite large (about the size of the palm of a hand).

For this reason we know that this series of Amulets came from the end of the Ayuttaya Kingdom Era, both because of their artistic design in Ayuttaya style, and obvious age, but also for the fact that the votive tablets were found in various hiding places in the province of Ayuttaya. It is deduced, that, at the end of the Ayuttaya Kingdom when Thailand first became united by king Naresuan Maharach, and that the new capital city was decided to be built in Bangkok it's that time, that's visa me let's were taken to be buried in various edifices which were being built at the beginning of the construction of the city of Bangkok. The national Museum and many of the buildings where these amulets were found, were also some of the oldest buildings in Bangkok, which also supports this evidence.

The Taw Chompoo votive tablet is with Thai Ayuttaya Ceremonial Regalia, and was seen by those who possessed on to produce extremely powerful Kong Grapan Chadtri Klaew Klaad Effects. Another very popular model is the 'Pra Khone Samor Pang Sum Prasat' which is a wider model inside a Tryptich Palatial Arched Frame, seated in Mara Vichai Posture (Subduing Mara touching the Earth). 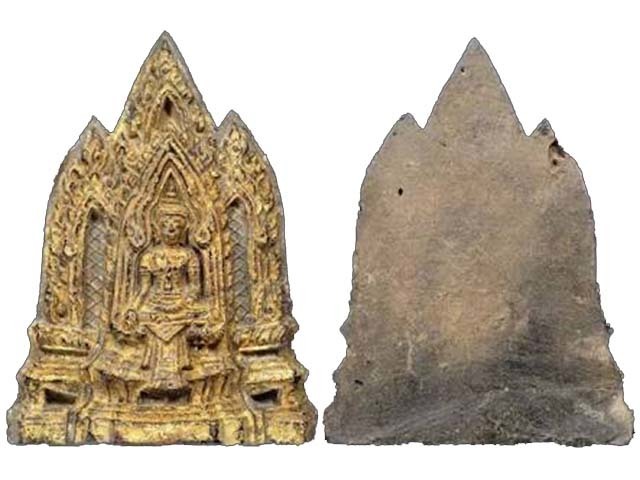 Both the immense beauty and the many stories of miraculous powers in connection with this Amulet resulted in this particular model of votive tablet to become the rarest and most popular of all of the baked clay versions. The most highly sought after and prized however, are the silver-leaden mercurial alloy amulets, which are much smaller and more portable to wear and are also much rarer to find, which has also influenced the very high price they carry with them.

Various postures wre also found to exist with this model, the most popular of all being the 'Pim Hoy Prabat' (Buddha seated with his right hand touching the earth hanging over his right knee). It is said that this amulet is also owned by his Majesty the King. In olden days it has been said that the Pra Kone Samor, was often used to hunt around the Necks of War Elephants and War Dogs, and that they would be protected from the lances and blades of the enemy when stampeding into battle.

The Pra Kone Samor was also one of the protagonists and reasons behind the Americans and the Vietnamese both calling Thailand's soldiers 'Taharn Phī' (ghost soldiers). This was because it was saying that sometimes the Thai soldiers would be outnumbered even 10 to 1 but that they would be unharmed buy bullets and often be completely unscathed despite being outnumbered.

In modern times it is not often that we have to go into battle anymore, and soul in times of peace it came to happen that Thai Buddhist people began to use these amulets, to put on their altars for worship,and to place them inside wooden frames as religious art masterpieces in the homes of the wealthy classes.

These ancient baked clay votive tablets, are most recommendable to place in your altar for Prayer and Bucha. Apart from being sacred and powerful authentic ancient Amulets, they are also extremely pristine museum pieces of historical and religious importance, as well as artistic importance, as far as Periodic Buddhist art forms are concerned.

We like to consider this class of Amulets as being not only Master-Class Amulets of highly sacred origins, but also to be extremely important historical artifacts. They can be considered classic family heirloom Amulets which should be passed on through the centuries for generations within your family, and can be seen as part of your family inheritance and heritage especially if you are Buddhist.

That are already of an age of around two centuries old, and if properly taken care o,f and prayed to properly, should still be around in another thousand years. The Pra Kone Samor, is considered a 'Pra Nirandtarai' (free from all dangers) Votive Tablet, with immense Kong Grapan Chadtri and Klaew Klaad Powers Who would not be proud and instilled with faith to possess such a sacred, ancient and historically important votive tablet?

The story behind this Buddha Stance (stances are called "Bpaang" in Thai) is such;

The rulers of the City of Kapilavatthu (called "Gabinlapat in Thai), were of the Sakya clan and relatives of the Buddha on his father's side, and the those of the City of Koliya, were relatives on his Mother's side. The farmers of each City used to farm on the banks of the river Rohini without any dispute. Then a time of drought came, and the locals of each City began to fight with each other for the right to take the remaining water left in the river. The dispute became so great that they started killing each other one on one.The situation escalated to the point where the rulers of each of these two Cities (who were both relatives of the Buddha), mustered their armies and went into battle with each other.

When the Buddha heard the news of this incident, which should have been discussed and solved easily using wise and peaceful discussion, he travelled to the scene of the incident to forbid the quarreling. He explained to them of the loss of population of their respective people and the loss of honor of each Royal Family which was coming from such a war, that was causing such terrible loss to each side and perhaps even that both Kings would even end up falling and dying in battle simply because of a bit of river water used for some farming.