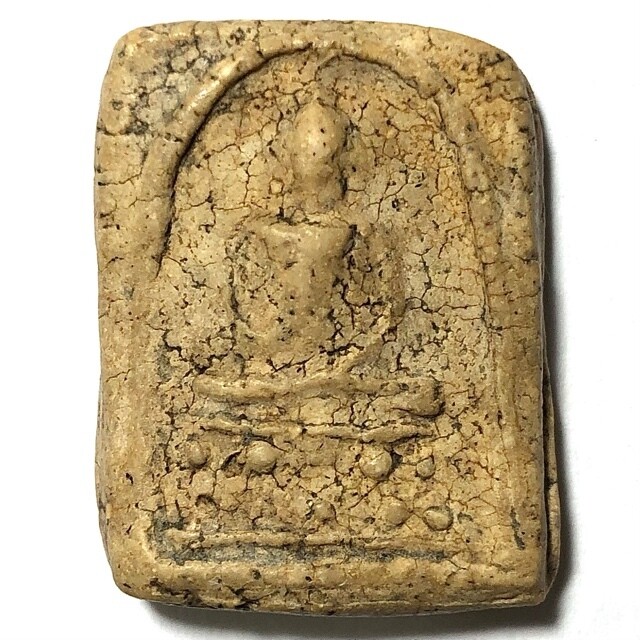 The Immortal Pra Somdej Pra Pilan Amulet, Pim Pathoma Tesana Lek Nuea Khaw Om Lueang (White Powders with Beige tone, resulting from Muan Sarn Sacred Powders containing 'Wan Gesorn' Pollens, and Nam Man Tang Iw Oil). This exhibit is classified as 'Mai Fang Kru' (not placed in Chedi Stupa Burial), Pim Lek (smaller model 2.5 x 2 Cm), and is a very old amulet of the times when all amulets were of the highest sacredness, and empowered with the magic resonating from the great purity of practice of their makers. 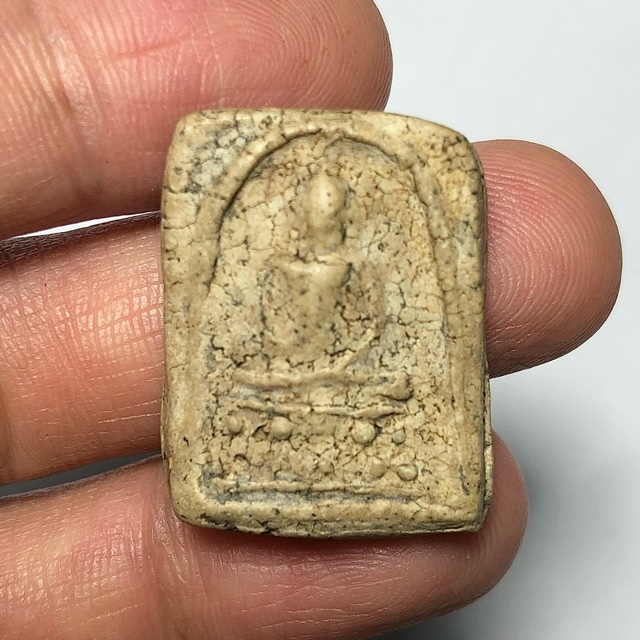 The Pra Pilan amulet (Votive Tablets), of Somdej Pra Puttajarn Tat (Pra Palad Pilan), Abbot in standing of the Great Temple of Wat Rakang Kositaram (Standing in for Somdej Dto Prohmrangsri, who was now old, tired, and approaching his death), is yet another immortally famous ancient amulet that is of immense historical and religious importance.‘Somdej Hmom Jao Tat’ (Luang Por Pilan), was born in the year 2364 BE, during the reign of his Majesty King Rama 2, and was the son a a family of regal courtiers within the Royal Palace (Wang Hlang), itself. 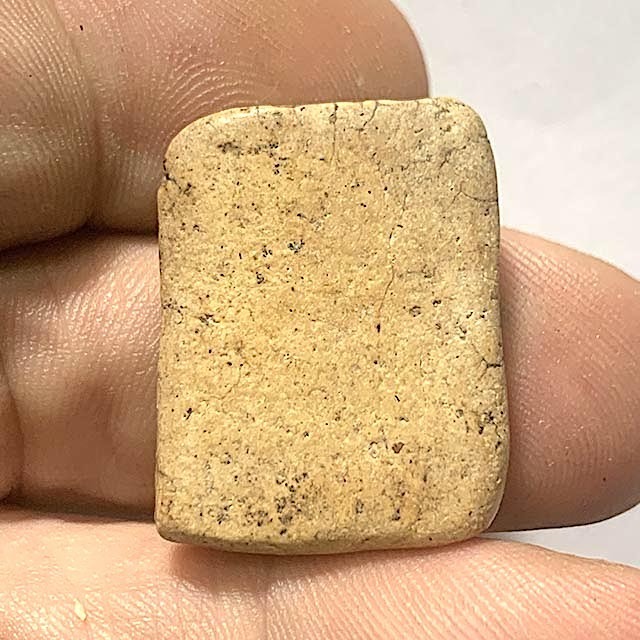 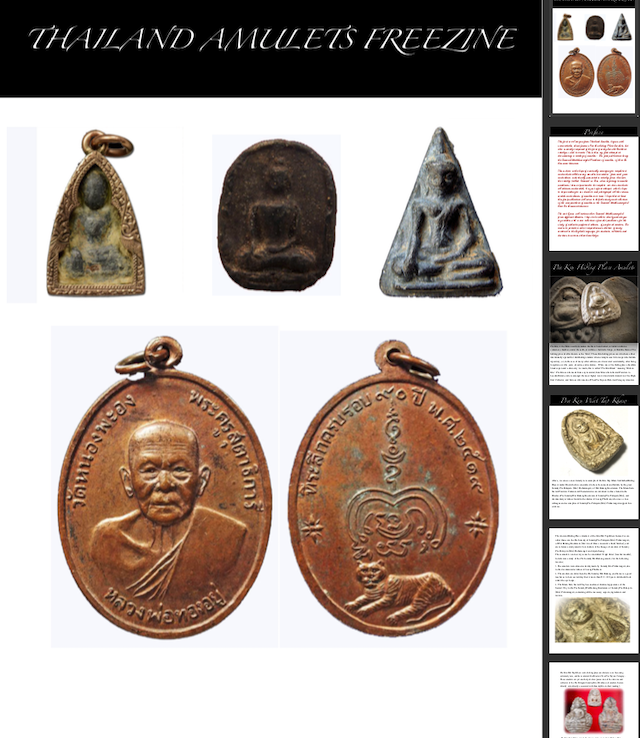 The Lanna Sorcery Free Ebook included, deals with Thai Occult traditions, and talismanic amulets of the folk of the Northern Lanna Regions, which have a rich cultural heritage deriving from a multitude of Ethnic Races and Cultures, with Animism being a strong influence on the magical symbolism found in Lanna Sorcery traditions. 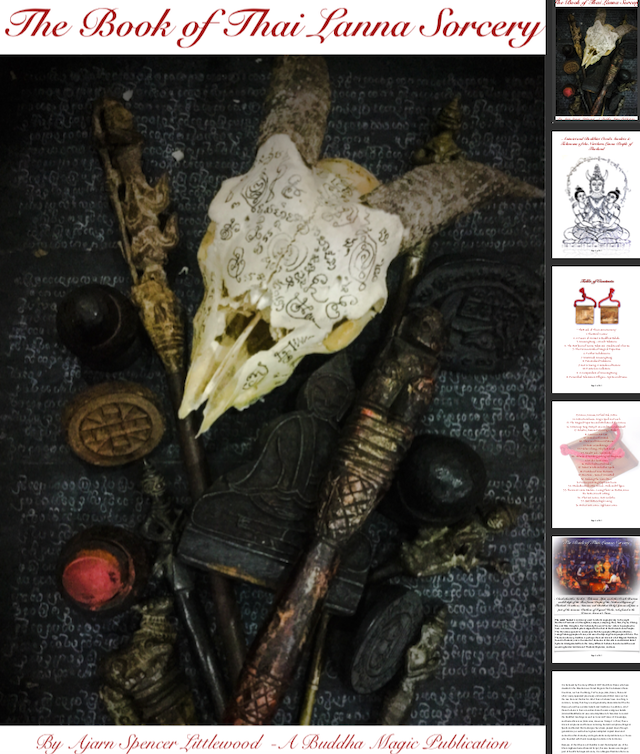 The book is of interest to amulet collectors, anthropologists, and occultists, and to anyone who wishes to deepen their understanding of the beliefs of the people of Siam. We sincerely hope it expands your knowledge of the various regional Occult Traditions of Siam, and include these ebooks as a heartfelt gift for for devoted interest in Thai Buddhist Amulets. 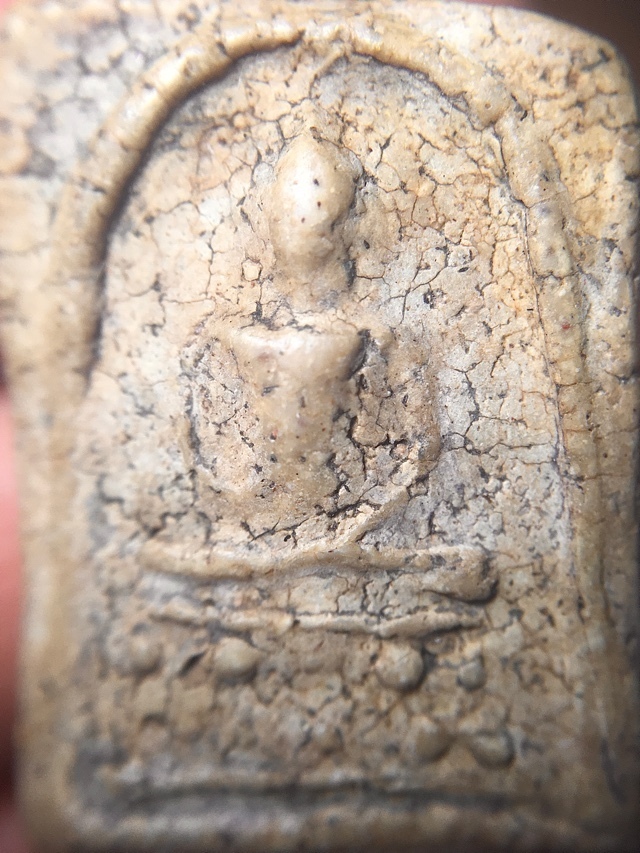 There are two different schools of belief as to when exactly the amulets were made, with some adhering to the belief they were made in the years between 2407 BE, with the second group believe the amulets to have been made in 2418 BE. This is a small but often discussed point of contention, which is where some people believe in the presence of Somdej Pra Puttajarn Dto in the blessing, and others, believe only Luang Por Pilan released them in 2415 or 2418, in Memorial of his Kroo Ba Ajarn’s passing away. 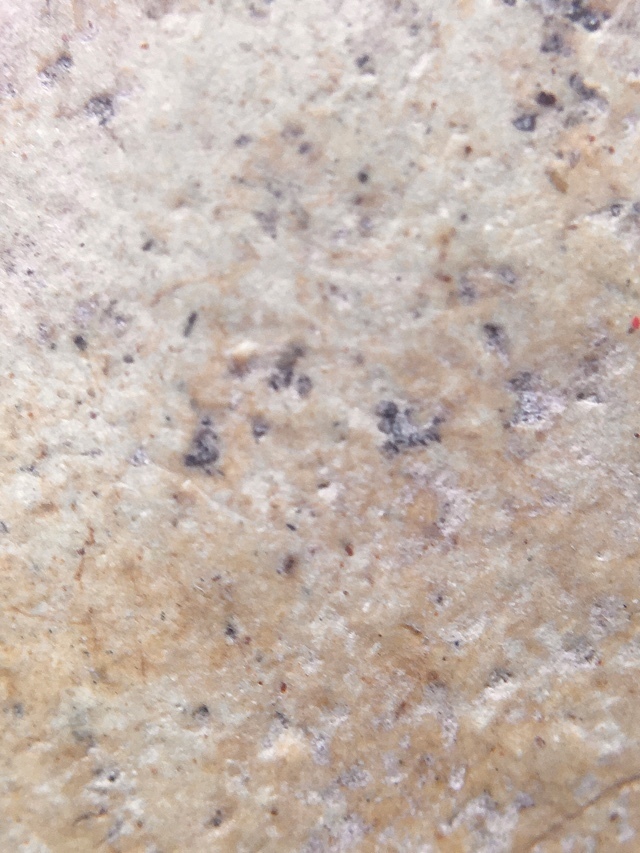 But both schools believe steadfastly, that the powders within the amulets are of both Luang Por Pilan, and posses those of Somdej Pra Puttajarn (Dto) Prohmrangsri. This is logical, as all Masters donate some of their own Muan Sarn Sacred Powders to their apprentices. It is however, despite differing schools of thought, when using logic, almost certain, and stands to reason, that they were made in 2407 BE, during the same year LP Pilan was elevated in status to ‘Pra Racha Pilan’, which is obvious reason for celebration with an edition of amulets, and which has always been ubiquitously expected by Thai Buddhist Devotees. 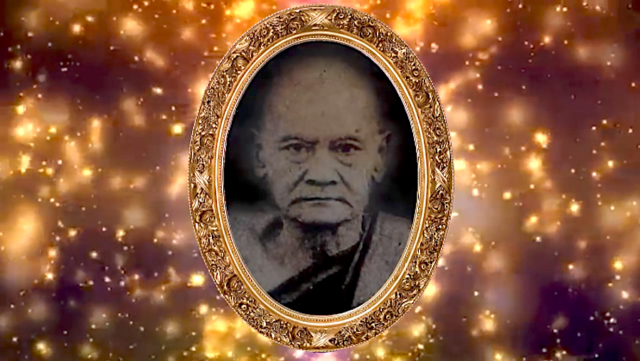 LP Pilan was ordained at Wat Pra Sri Radtana Sasadaram (Wat Pra Gaew temple of the Emerald Buddha), in the year 2385 BE. Somdej Pra Sangkarach, the Head Royal Monk of the Thai Sangha performed the Ordinaton, as his Upachaya Ordaining Officer. 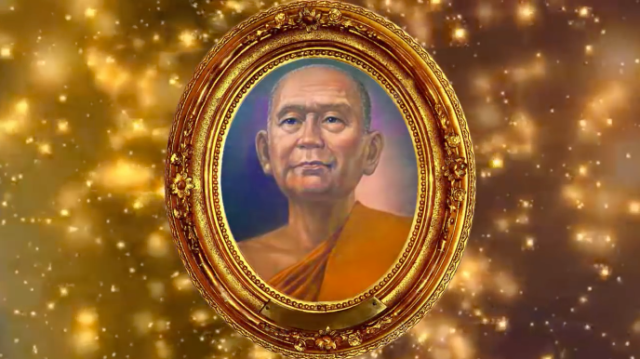 This of course, led to Luang Por Pilan becoming the closest first apprentice to Somdej Dto in this period of Somdej Dto’s Life, which was coming towards his twilight years, and he needed to pass on his Wicha to a successor. Luang Por Pilan embodied this expectation, and so he received the Wicha Pong Lob, secrets of making the 5 Sacred Powders of Somdej Dto used in the World Famous No 1 King of All amulets of the Benjapakee family, the Pra Somdej Votive Tablet. 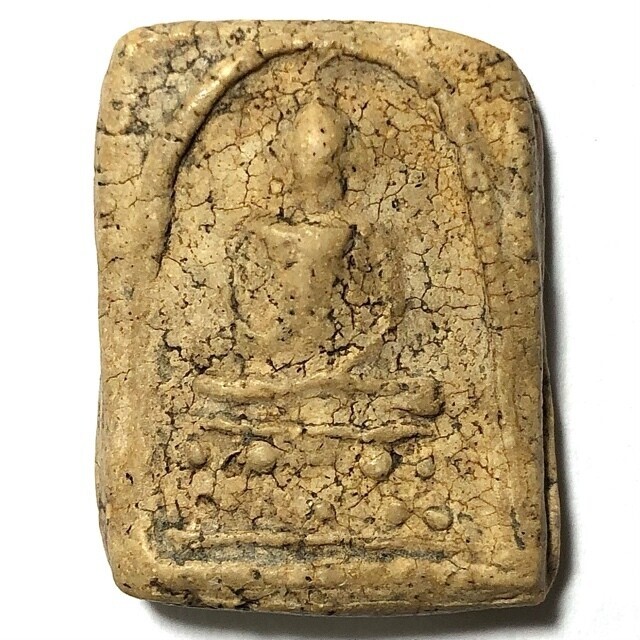 In the year 2404 Pra LP Pilan was elevated to the status of ‘Prinya Jet’ in Pra Pariyattitam Dhamma Studies, which is the 7th of a total of 9 levels of academic prowess, and understanding in teaching and expounding the Dhamma. In the year 2407 BE, Luang Por Pilan received his officially Royal Bestowed title of Pra Kroo Pilan, with Royal Recognition of his Merits. 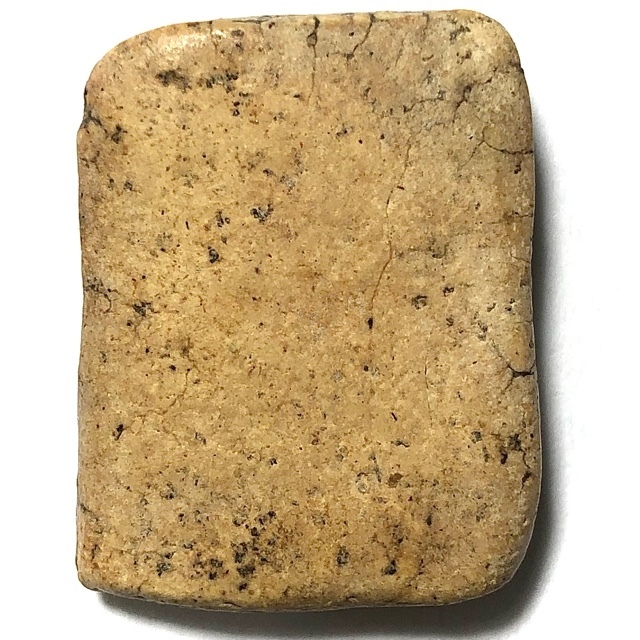 In the Year 2413 BE, LP Pilan became the Abbot of Wat Rakang, due to the fact that Somdej Dto himself was becoming very old and frail, and so the honor of overseeing the many duties of running the temple were given to Pra Luang Por Pilan, which was of course, a mark of honor to be chosen for this task. 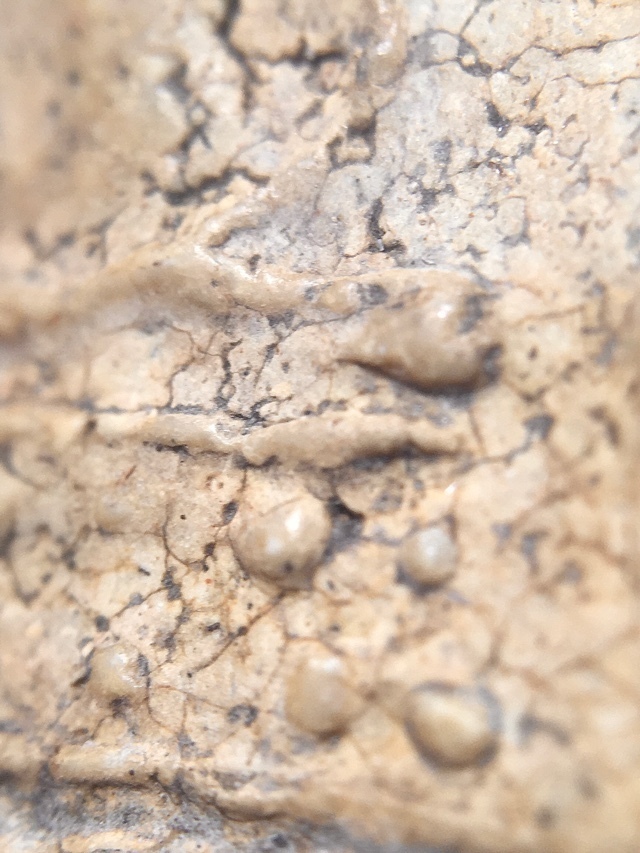 In the year 2435, he was bestowed the Title of Pra Racha Kana (Bishop), and was given the duty of overseeing the temple of Wat Po Ta Tian (or; ‘Wat Chetupon Wimongkaram’), a temple that is in itself world famous, for its rare and powerful Pra Pid Ta Pong Graduk Phii amulets) Luang Por Pilan administrated the temple of Wat Chetupon Wimongkaram (Wat Po Ta Tian) up to his passing in 2443 BE. 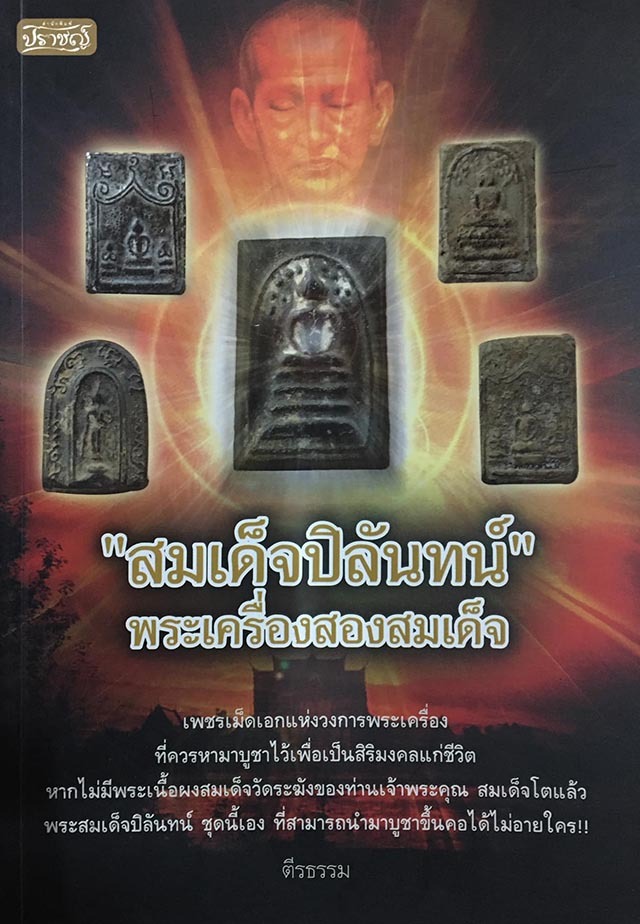 The Pra Pilan Wat Rakang series of amulets, enjoy worldwide popularity, for the Stoic Belief in the Metta Mahaniyom, Kong Grapan powers, which they have acquired over the many many years of their existence. 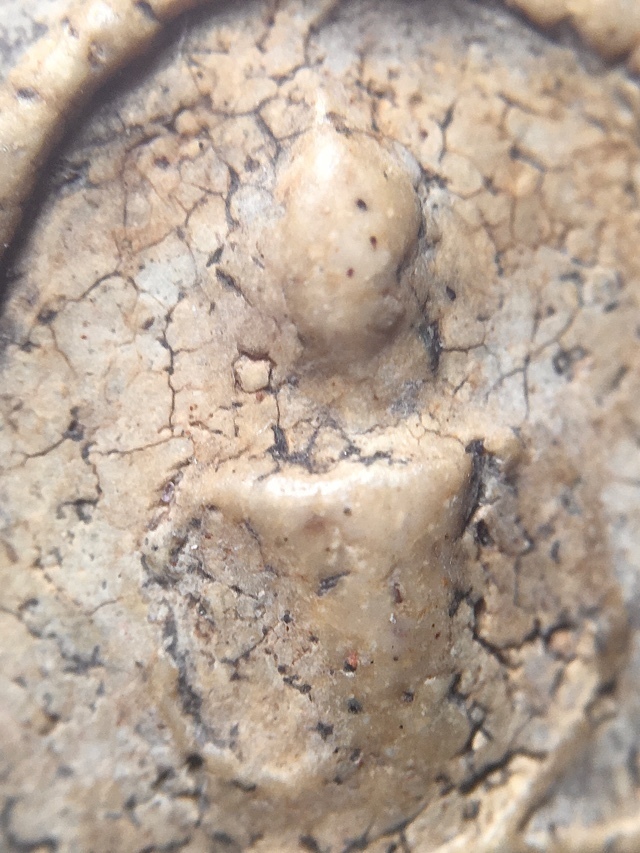 The Pra Pilan Wat Rakang amulets, are now truly becoming at least as difficult to find as the Pra Somdej Wat Rakang these days, making them a highly recommendable amulet to collect. This is of course, to evade the impossibility of finding one later, as well as to possess such a sacred amulet of world fame, renowned for its sacred powers. In addition, the amulets are seen in Thailand by many (such as ourselves as devotees, and high end showroom collectors , speculators, and curators), as a high return method of asset division. 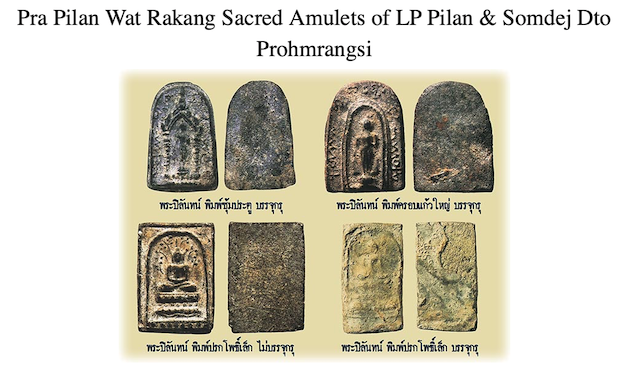 This is because, to possess a Pra Pilan Wat Rakang Kositaram, is to possess something that increases in inherent value as time passes, and rarity increases, and whose price rises at a much faster rate (if look at a ten year period), than many other material assets, even Gold. The world population has increased so much the last half century, that it has made even editions that were made in numbers of 84,000, deplete and disappear from Public view in a matter of a few years. This has increased the rarity and value of Ancient Master-Class amulets immensely over the last few decades. 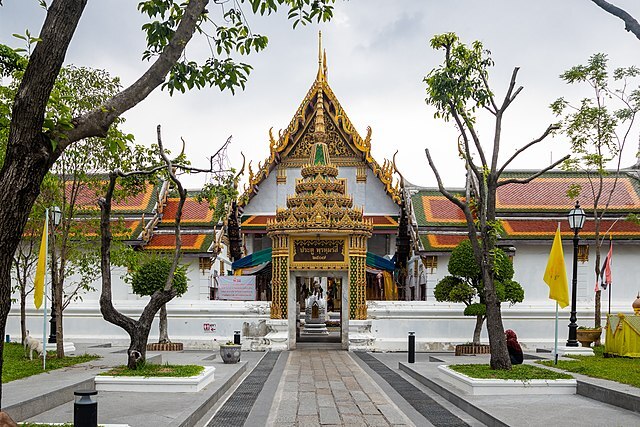 We do not hold monetary speculation as an interesting factor in our own love of amulets, but must admit,. that financiers, bankers, and investors, DO use Thai Buddhist amulets as a method of asset division with incremental value. We mention these factors only for this reason, to explain just how varied the kinds of people are who collect amulets, ranging from those seeking Magical assistance, and Luck, through those whose Devotion to a certain Master is so great they wish to possess an amulet of their Master, right up toe the Curators and Museum collectors, and the Speculative Investors, who practice wise asset division, in times of financial crises, such as the Pre and Post Pandemic Era. 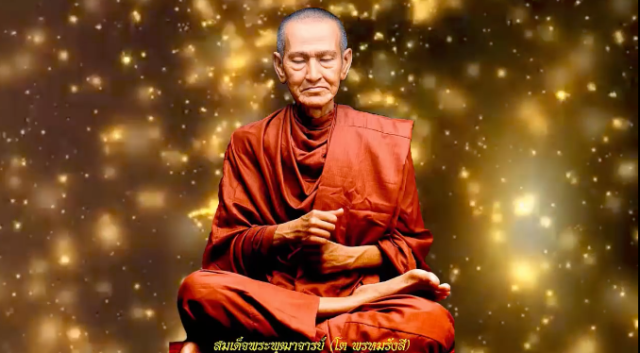