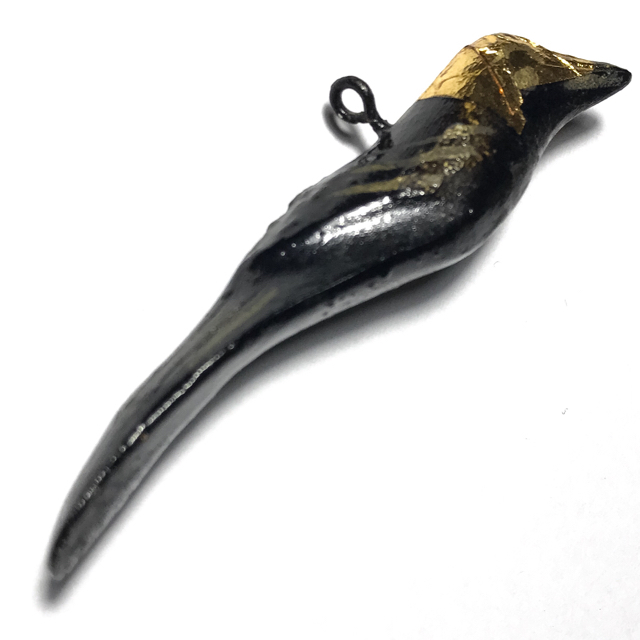 Nok Sariga Jik Sap (Celestial Magpie), hand carved from Mai Payung Dam sacred Treewood, a rare black anomaly of the Payung Tree, which occurs only once in 100,000 trees (circa). The Payung Dam black colored tree is believed to have the most powerful and rare to appear on earth spirit entity inhabiting the tree.

The black Payung Tree, is considered one of the most powerful sacred trees for the carving of talismanic amulets, and animist charms. A classic and rare amulet with empowerment and hand inscriptions from Olden days Deceased Master Monk, Luang Por Kane of Wat Tham Khao Ito 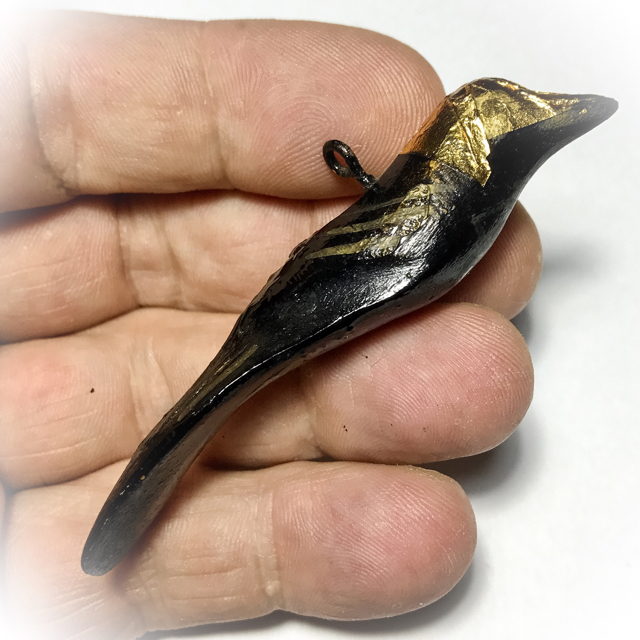 This 'Krueang Rang' (Talismanic Occult Bucha item), is a compendium of different ancient animist charms bound into one single Wicha, for Kaa Khaay, Maha Pokasap, Metta Maha Niyom and Maha Sanaeh Magic. The amulet is empowered the Wicha Sariga Jik Sap (Magpie pecking up treasures) for Maha Pokasap Wealth Accumulation, for which Luang Por Kane was so immensely famous for. 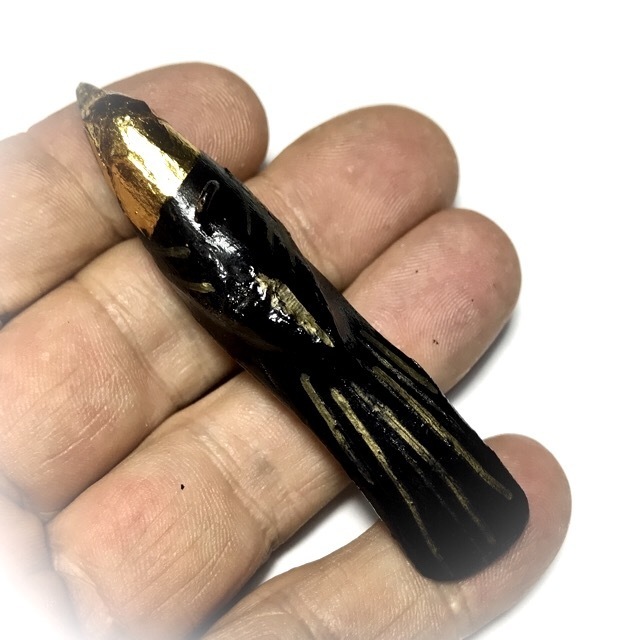 The Sariga bird has a pendant hoop for hanging in the place of business, or in your car, or wherever you wish to attract the favour and preference, and interest of others. It can also be attached to a chueak kart aew waist-cord belt if preferred to be worn as an amulet, or even encased within waterproof casing with pendant ring. 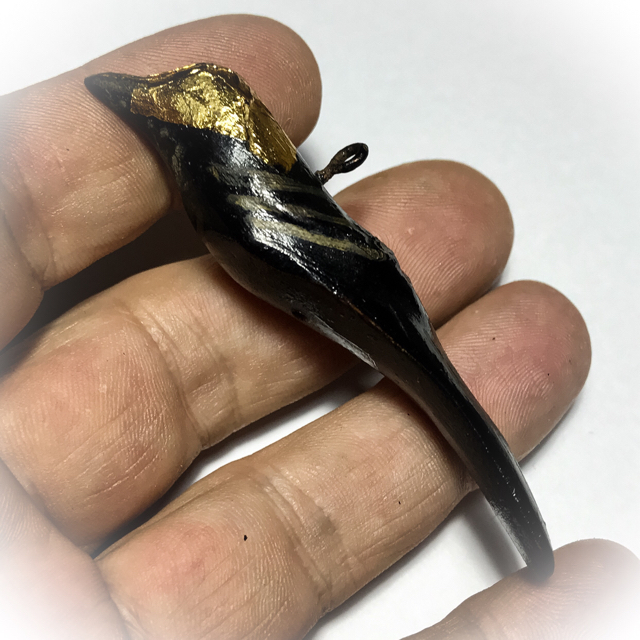 The Sariga (sometimes also called 'Nok Garawaek') bird is empowered with spells with the Invocations of Maha Sanaeh, for Seductive Charm, and Maha Pokasap for Prosperity. 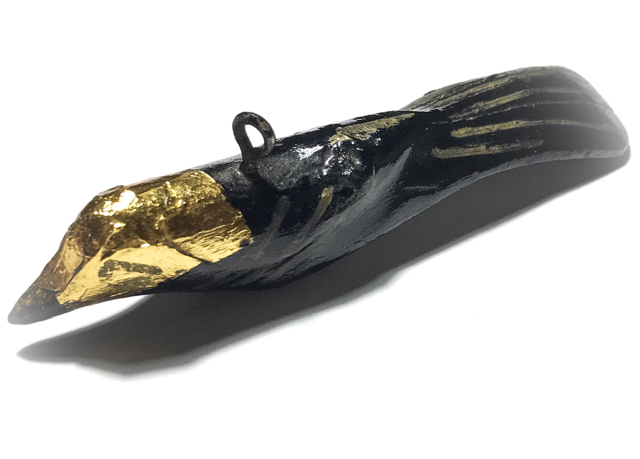 The Amulet measures 7.5 Cm in length. 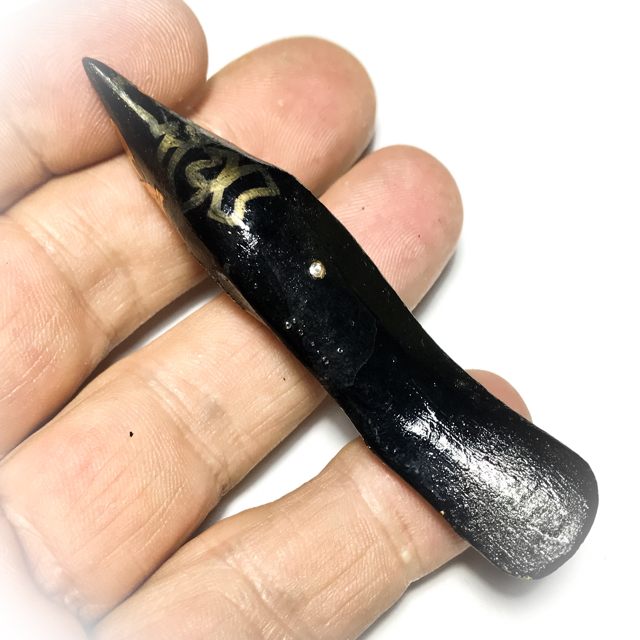 Knowledge Base; The Legendary Sai Dak Pla of LP Kane

Luang Por Kane was also famous for the Wicha Sai Dak Sap treasure-Trawler charm; The Sai Dak Pla Sek trawler trap is a very ancient fishing trap of Thai people, and is a symbolic attractor of wealth and good business. The Sai is a wicker woven basket which has a valve-like one way trapdoor, which allows fish to swim in, but not out again. The Sai hence represents a container which can have wealth coming in, but which does not leak the wealth out again (Ud Sap/Maha Pokasap).

The 'Sai', is an Olden Days invention of Thai Farmers, who in the months after the harvest, when nothing was left to do until the sowing season, would use the spare time to find other ways to find food or things to sell.

They would scour the surrounding areas, the marshes, streams rivers and ponds, for fish. The Sai was a basket made with two special openings in it, where fish could swim into the basket, but were not able to swim out aqain, effectively imprisoning them until enough fish were inside the basket to take to market, or to go home and eat, or both. 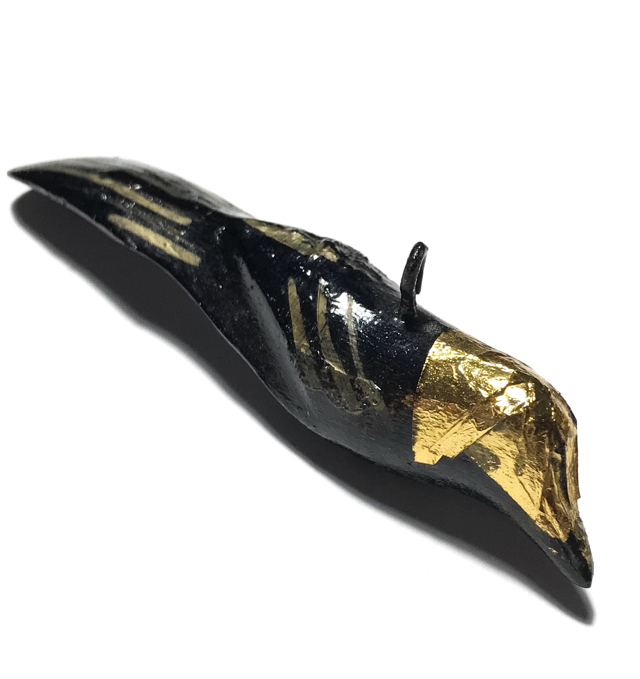 For visualisation of applied magickal effects onto amulets, with meditative force, the formula of using the shape and form of the Sai Fish Trap basket, is perfect, for envisionment of money or treasures entering the trapdoors of the Sai Fish trap (now a magickal money trap instead).

One should envision the Sai Dak Pla Sek reeling in the treasure, as the basket fills, and becomes full to the brim with desired possessions and wealth. The allusion is obvious, that the Sai will allow wealth to enter into your possession, but not allow it to slip out through your fingers anymore, and keep it safe, and on the increase. 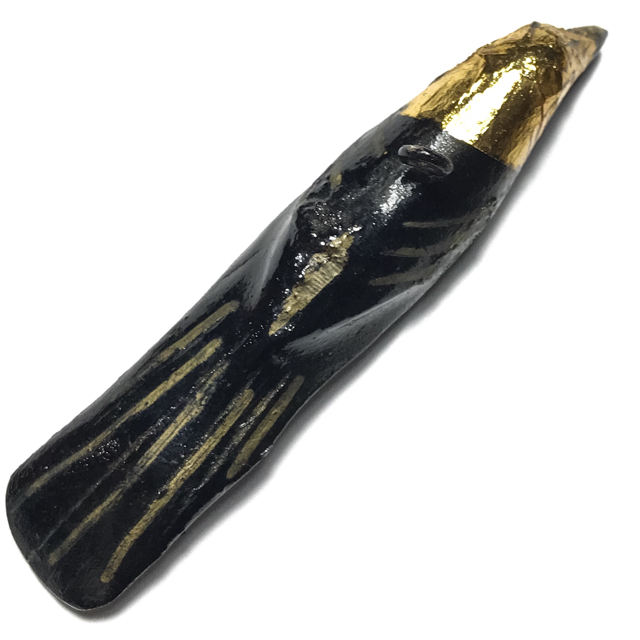 This is what you should envision whilst praying to the Sai Dood Sap, and chanting 'Ehi Jidtang Bpiyang Ma-Ma', whilst thinking 'come to me all of these things'. 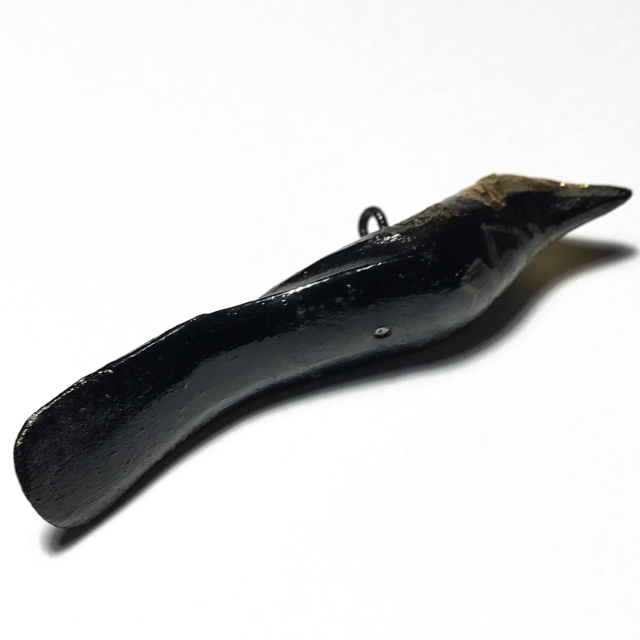 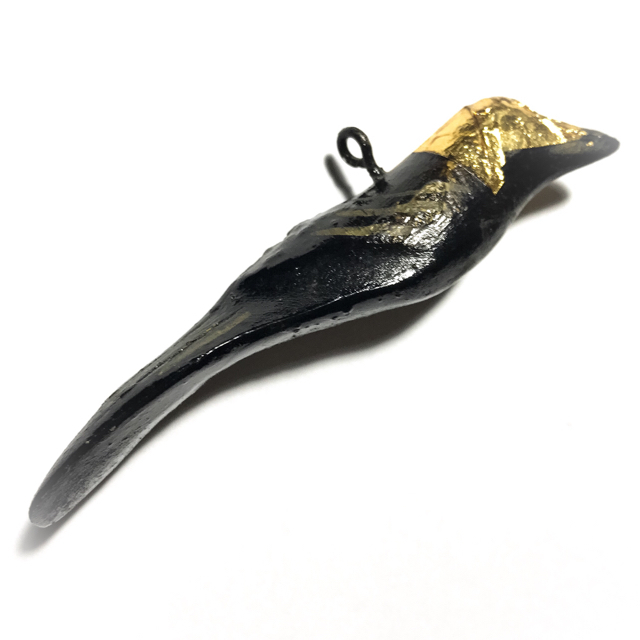 The devotee was once more astounded, as he realized he had left the house without informing anyone where he was going, and that indeed, they would be wondering where he was, and worrying about him. 'How did Luang Por know?' he thought, and his devotion, respect and faith in Luang Por Kane rose, as he realized that Luang Por was a truly attained Master. 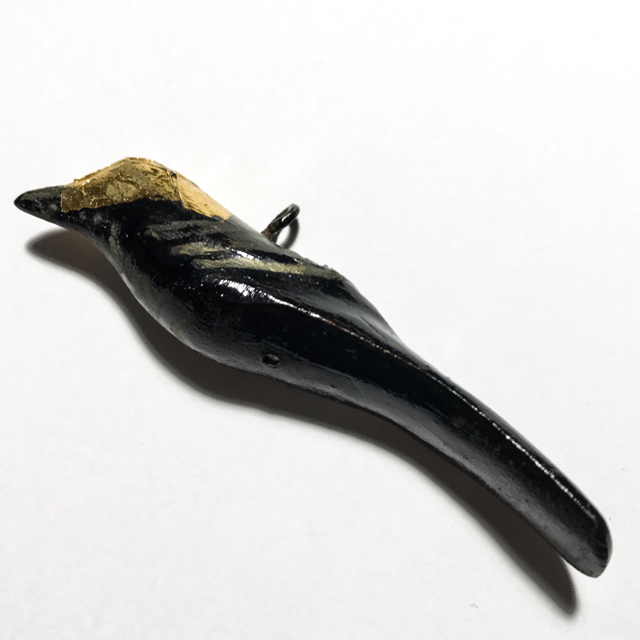 Another devotee once came to look for Luang Por Kane, and was told that Luang Por was up in the Tham Khao Ito cave meditating. The devotee climbed up to and entered inside the cave, and saw Luang Por was chanting prayers and meditating there. But what was amazing, was the fact that Luang Por was floating about one meter high in the air as he was chanting, and remained there for some time, finally floating down to come to rest on the floor in meditation posture.

An air force pilot from the Jakra Pongs Base in Prajinburi also claims to have seen Luang Por Kane performing Bintabat alms round in the clouds as he flew his plane. Luang Por Kane was an Olden Days Gaeji Ajarn who was of superior age than the great Luang Por Jong (Wat Na Tang Nork), and Luang Por Ia of Ban Dan, who were also two of the greatest masters of the Indo-China wartime Era.

Luang Por was born in the year 2402 BE, and lived 111 years, until his passing in the year 2513 BE. His amulets and occult charms are renowned to possess very powerful Metta Maha Niyom, Kaa Khaay, Maha Lap, Maha Pokasap. He was famous for his Sai Maha Pokasap, and Sum Riak Sap Money traps, and carved Sariga, Garawaek and other birds (such as Nok Kum), mostly carved from Ga Hlong Tree wood. 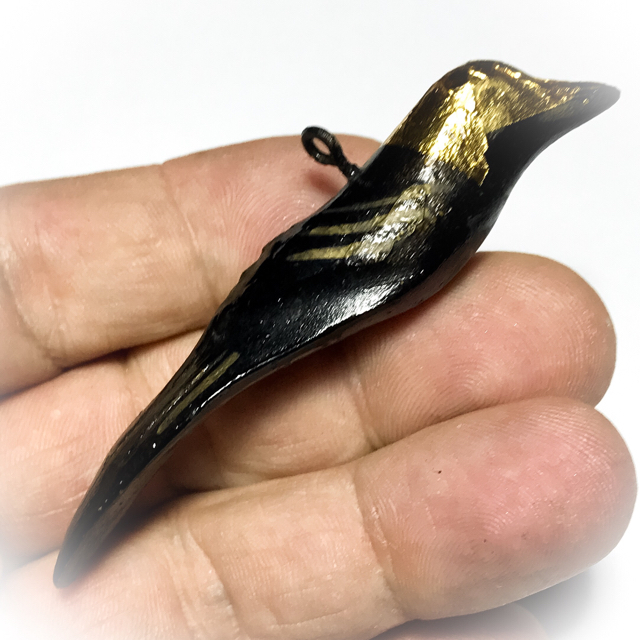 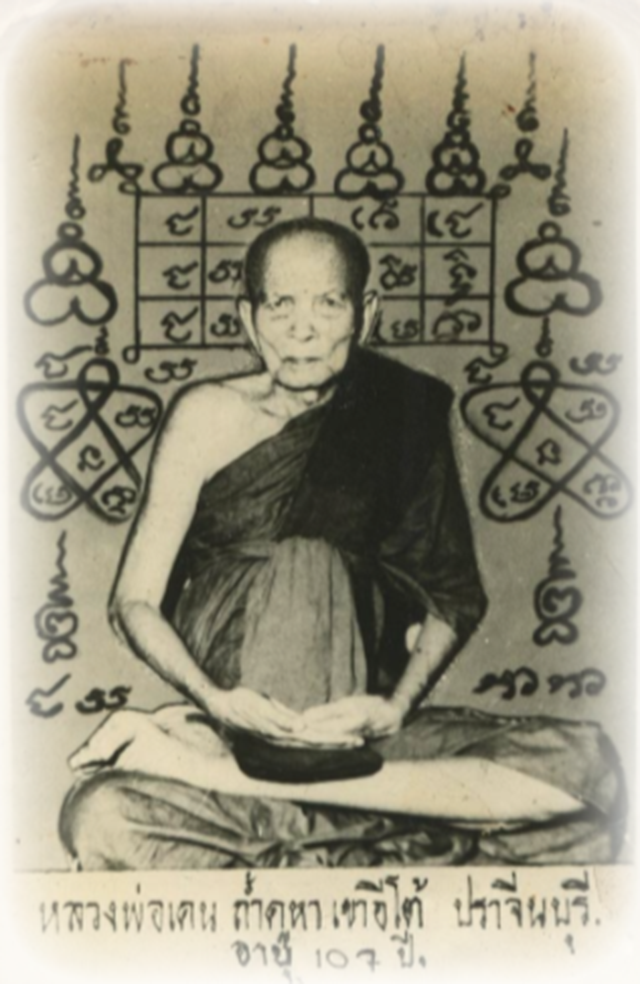 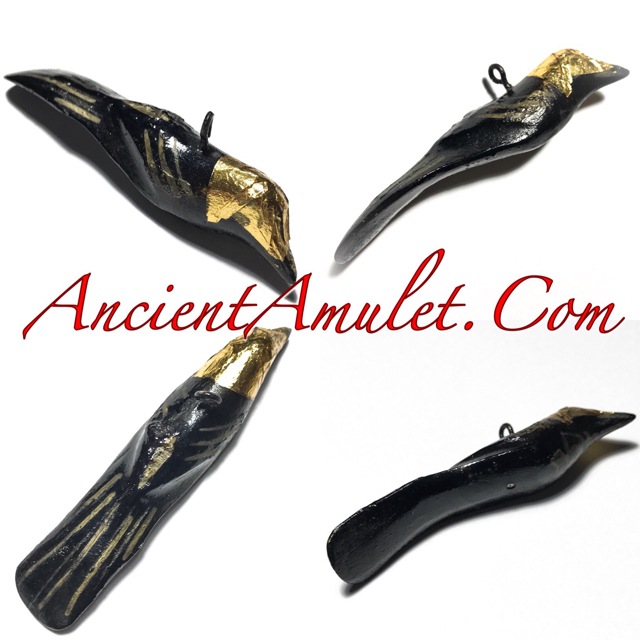