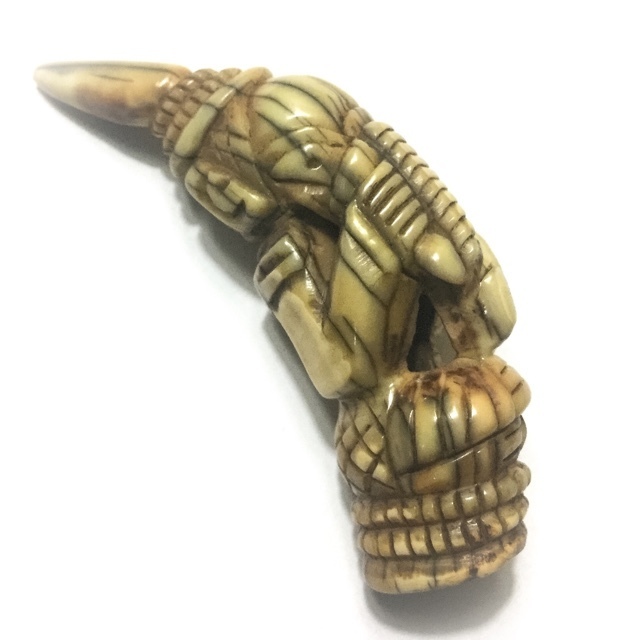 This beautifully carved Ganesha God is made from a large Khiaw Suea (Tiger Tooth), and has been empowered in Ritual Ceremony at the Holy Cave of Khao or, by the Masters of Old, of the Dtamnak Dtak Sila Khao Or. Southern Academy of Sorcery.

The tooth is estimated to have been made in the final decade before 2500 BE, and is carved with extremely fine Artisanry, with highly detailed features. The tooth is carved into the image of the Elephant Headed God Ganesha (son of Shiva), remover of all obstacles, and bringer of success. Ganesha is standing holding his tusks. 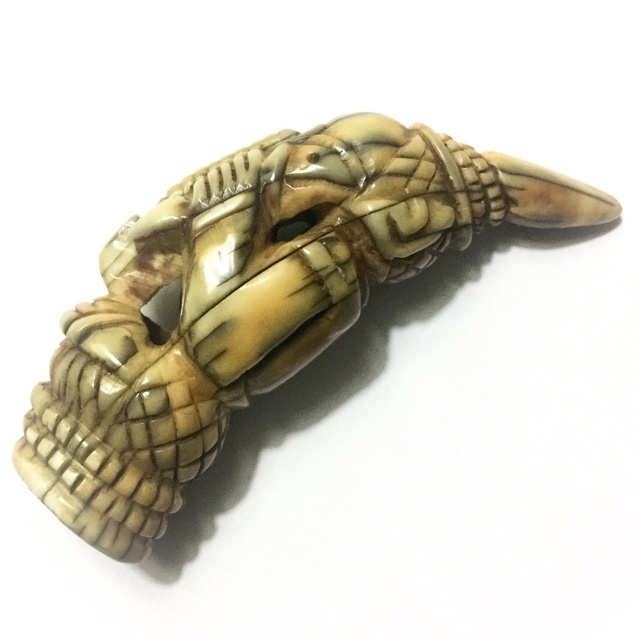 The tooth is covered with small crevices along the length of the tooth, which is part of the aging process, along with the development of a golden Patina. Such crevices are also found in pieces of ivory tusk as they age, but this exhibit has other features which confirm it to be tiger tooth, despite its great similarity in surface appearance to ivory. 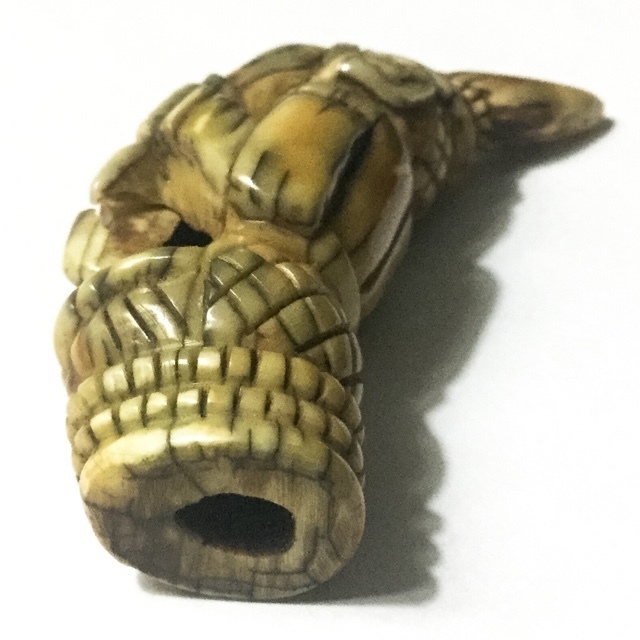 The markings on the base of the tooth which shows the rounded (slightly oval) hole, and the 'tree-ring' like lines, also reveal the tooth to be that of a tiger. The tooth is hand carved with the image of Pra Pikanes (Ganesha), for removal of Obstacles, Success in one's Undertakings and Profession, Wealth and Promotion. 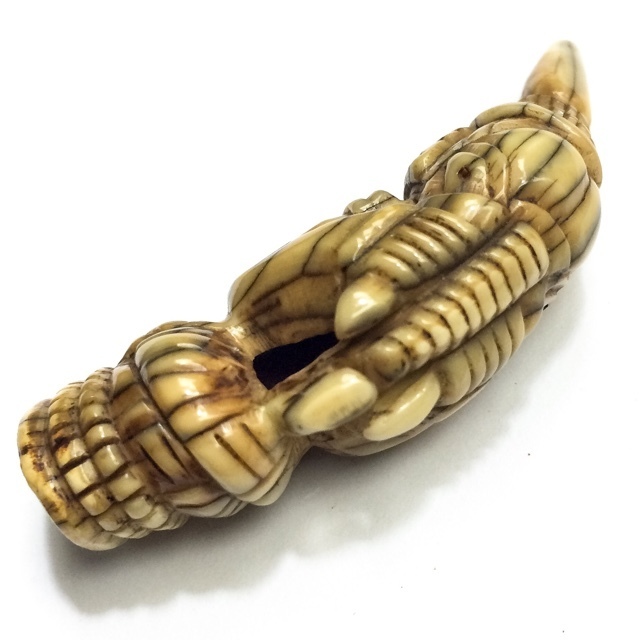 The Ganesha is carved in the style of the Southern Sri Vichai Era Traditional Artistic Style, in line with the tradition of the lineage Masters of the Dtamnak Dtak Sila Khao Or. This type of individual exhibit is an extremely rare item to encounter and is especially rare to find a carved tooth in this condition, with such exquisitely finely carved details, and artistic interpretation. 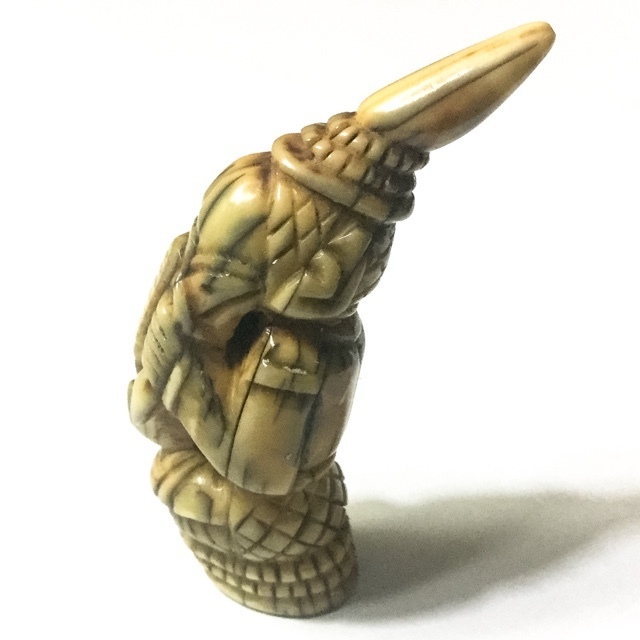 Ganesha or, as we say in Thai ‘Pra Pikanes’ is the Deity for removal of obstacles and attainment of success. Pra Pikanes has many different forms, with different meanings. he may have four, six, eight, twelve or even fourteen arms, but almost never two arms, this being a Tabu. Pra Pikanes may carry any of a number of 57 different Cosmic weapons or regalia in his hands.

Ganesha has many different Emanations and Postures, but the most Common Traditional Posture of Ganesha, is four armed with Whip Goad, Ritual Axe, an Om in the palm of raised hand, and Fruits as consumable offerings. 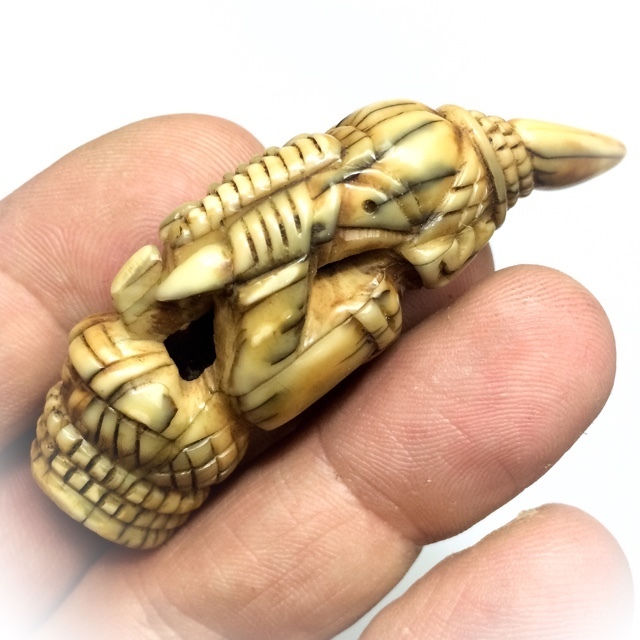 This Posture and combination induces not only the removal of obstacles and success, but also wealth and plentiful treasures and possessions and well being. The hand wielding an axe, is a symbol of the retrenchment of all desires, bearers of pain and suffering. With this axe Ganesha can both strike and repel obstacles. The goad restrains all inner and outer enemies. 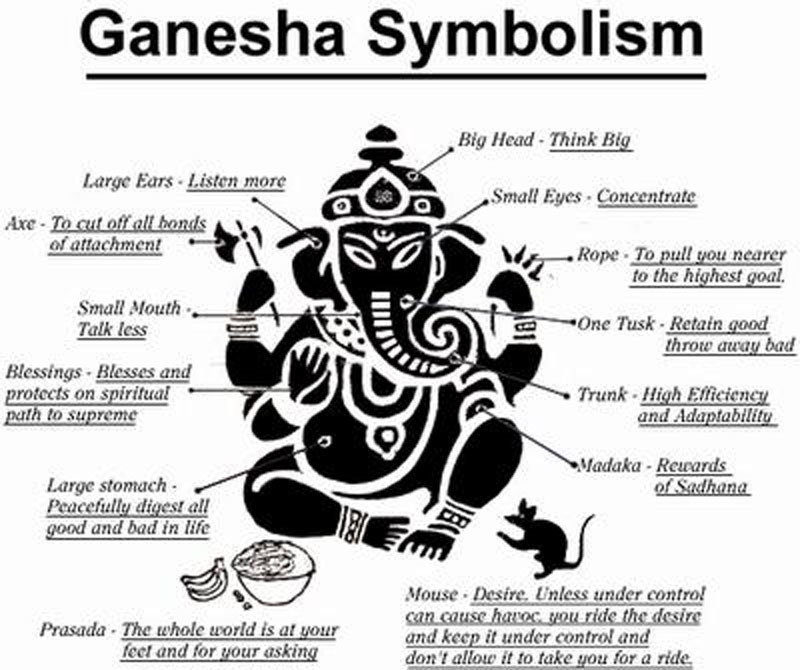 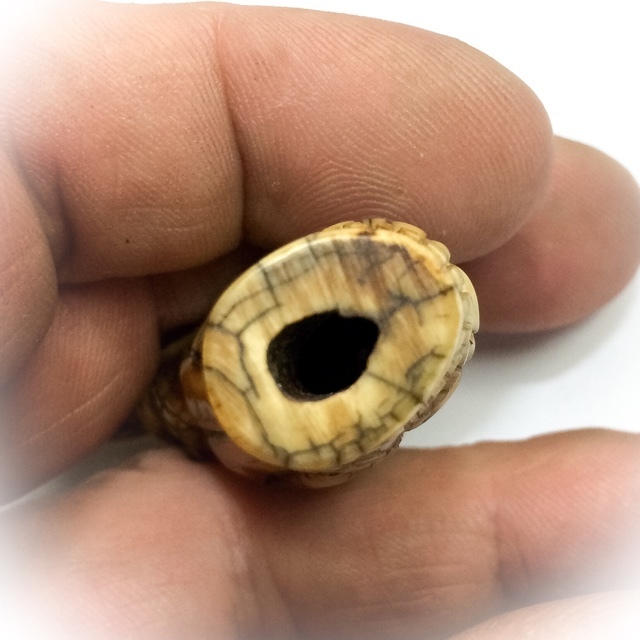 Significance of four : It was God Ganesha who instituted the four castes and the four Vedas. One hymn in Sri Bhagavat Tattva , says: ‘In heaven, this child will establish the predominance over gods, on earth over men, in the nether world over anti-gods and serpents. 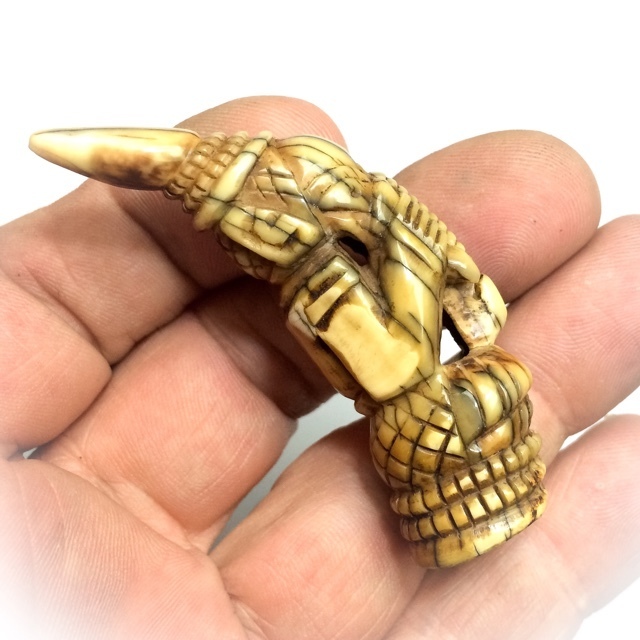 He causes the four ruling forces of the elements to move, for which he has four arms. You can use the Chants to Ganesha (Pikanes) to empower the amulet, and to beseech blessings, to attract, and improve your profession, charm, wealth, status. 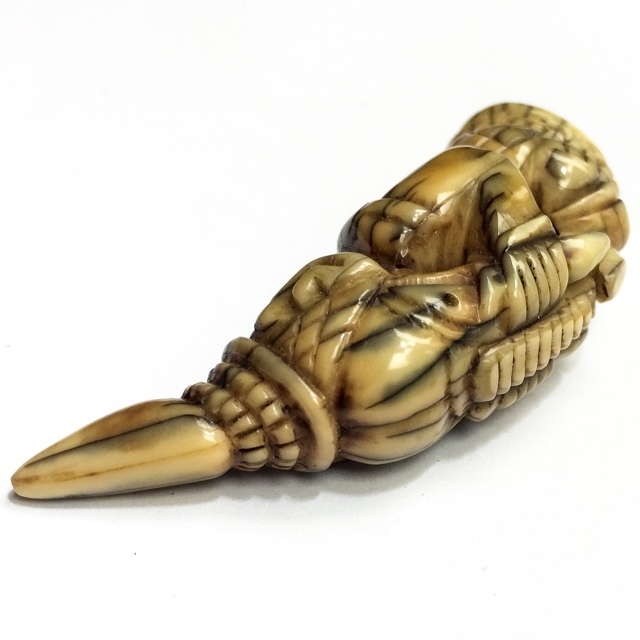 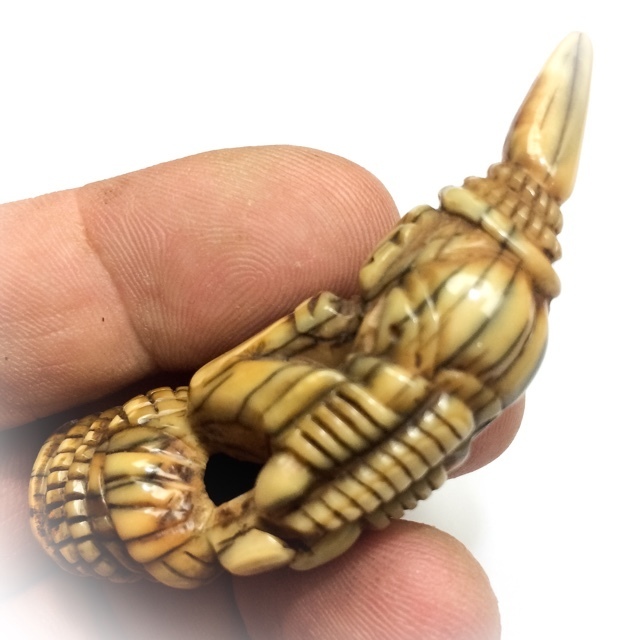 Use when putting the amulet on and off each day, and as a short Kata when passing Holy Places with Images of Ganesha, or when during daily activities. 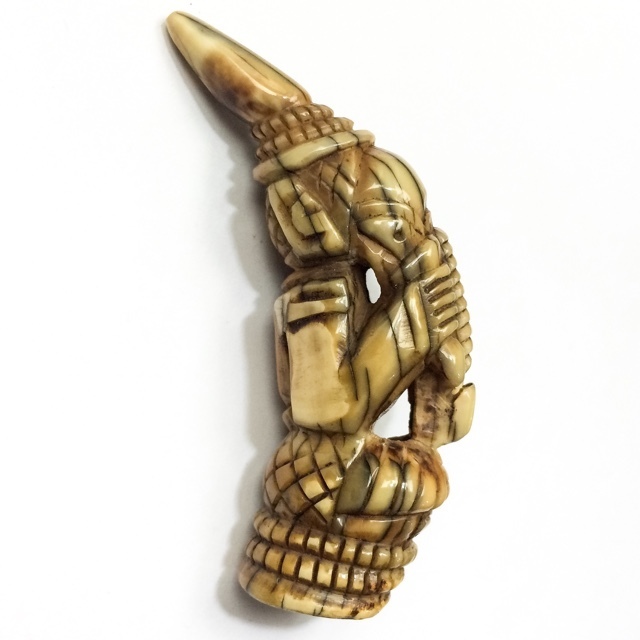 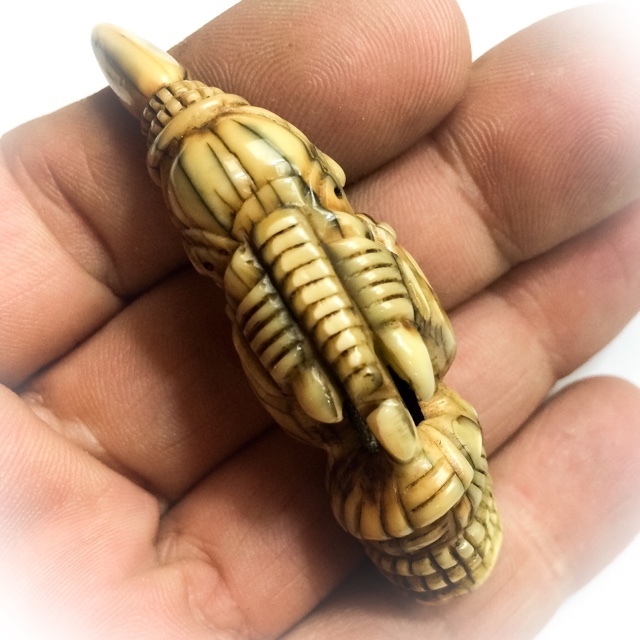 Apart from wearing the amulet, you can use it as a ritual object to make prayer water (through immersion in the water bowl, and chanting with incense, flowers and offerings, preliminary prayers), or to place on a small tray on the altar and make offerings as a Bucha Deity. 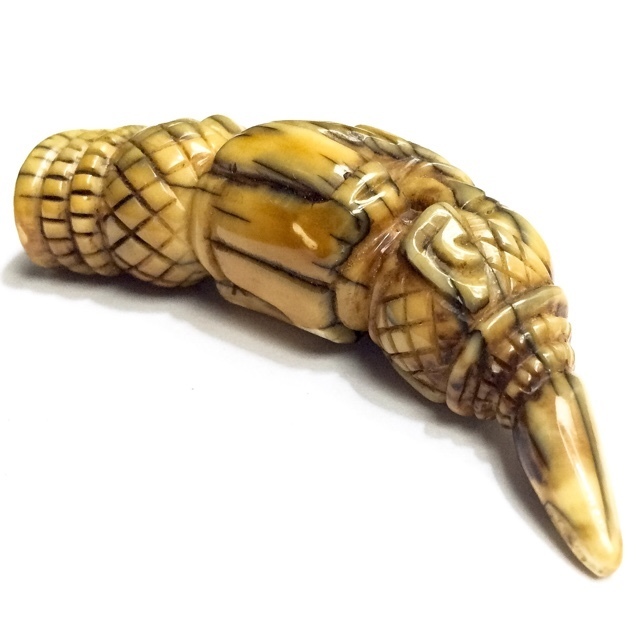 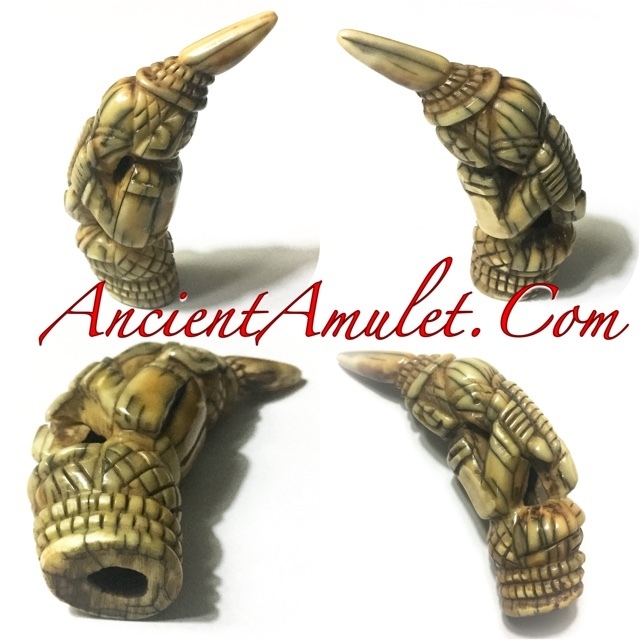