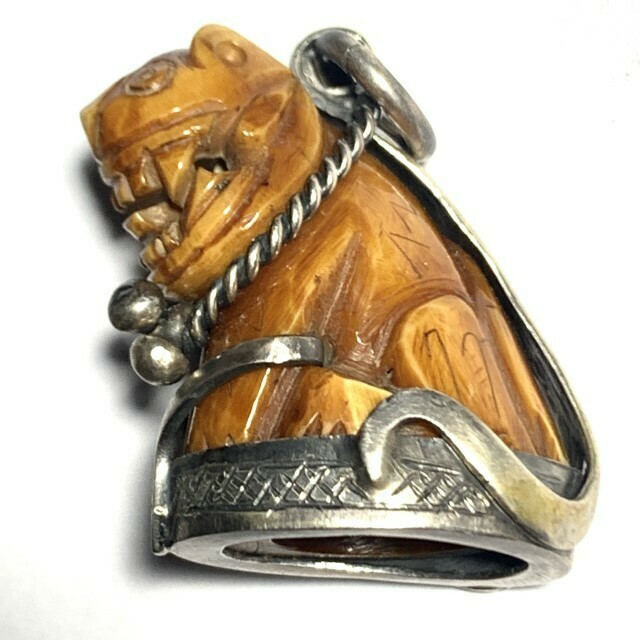 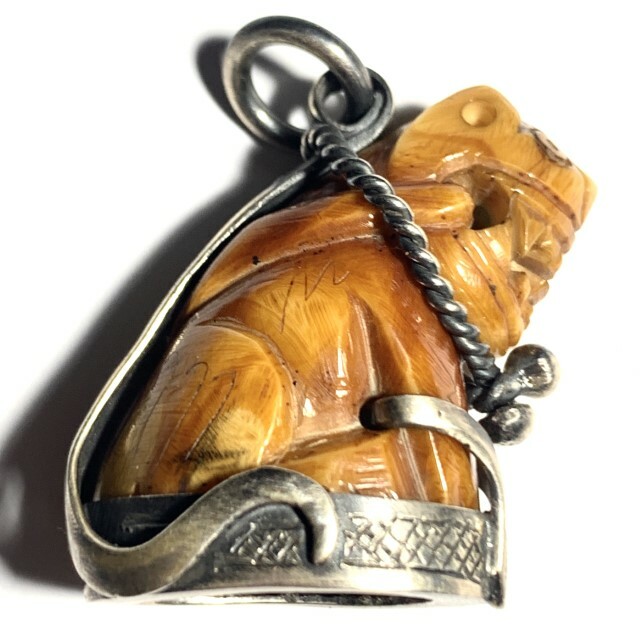 This exhibit is encased in an old school hand made custom solid silver wire frame casing, with wonderfully crafted embellishments, such as the curved tapered insinuation of a tiger's tail, wrapping around one side of the amulet on the silver base ring. 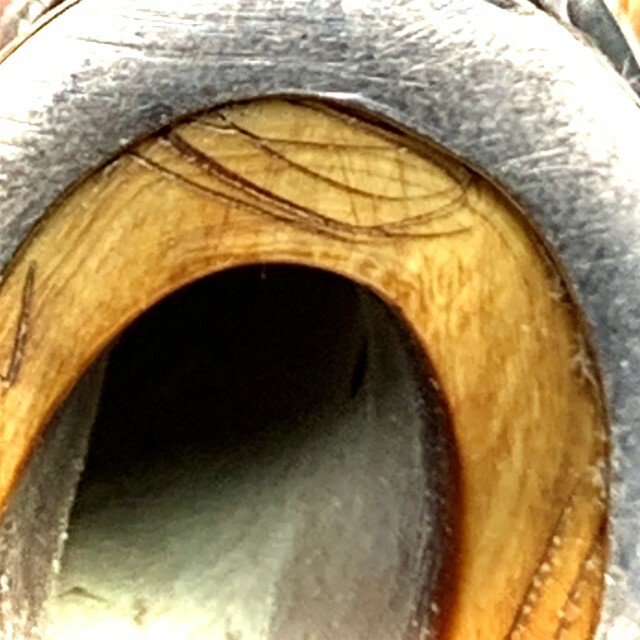 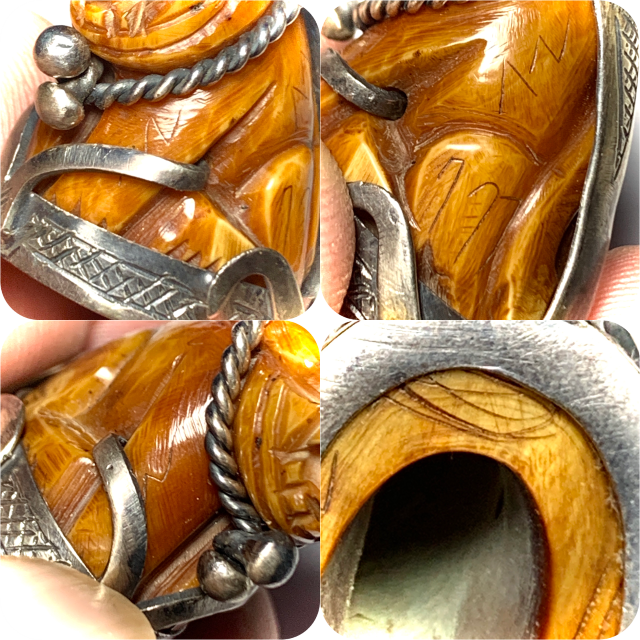 Not all carved tigers of LP parn possess all these inscriptions, due to the fact that some of the amulets were miniature, or ledd well carved in order to leave space ofor the inscriptions or not. So to find one of such an early era with such patina, full inscriptions and such a beautiful custom casing is indeed a rare find. 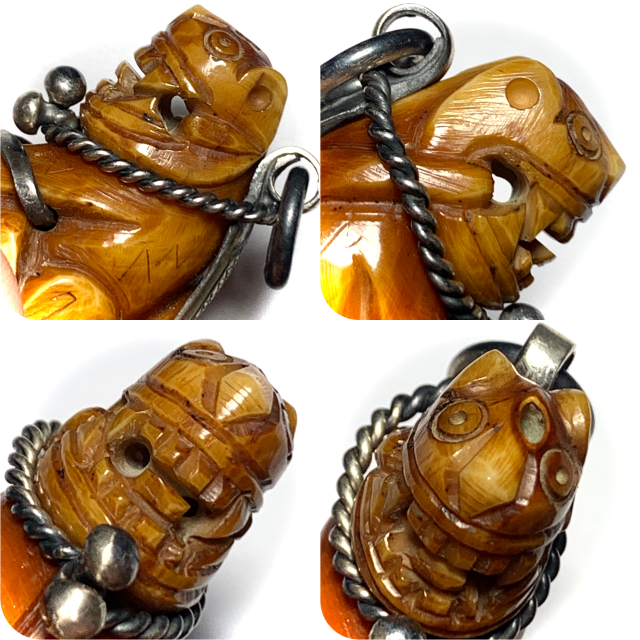 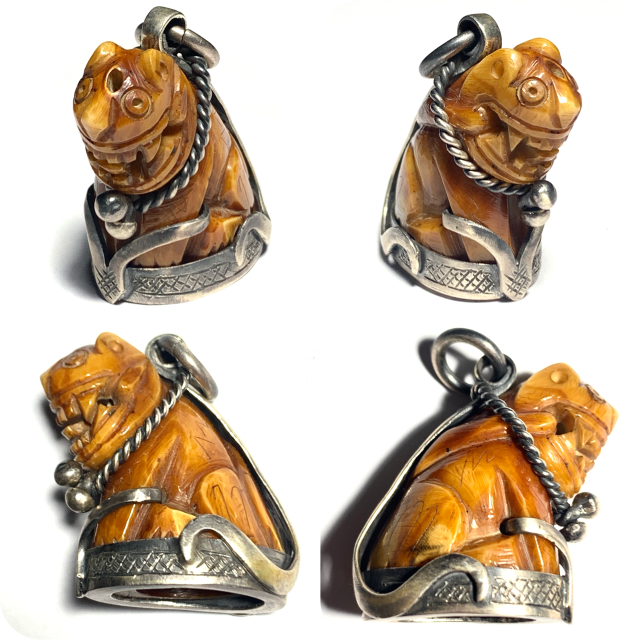 Free express (DHL/FedEx/EMS) airmail shipping worldwide is included with this amulet. Luang Por Parn was one of the Great Master Guru Monks of his Era (2368 - 2443 BE), and the originator of the Wicha for Tiger Amulet empowerment of this Lineage, using the Wicha of Wat Bang Hia. Wat Bang Hia is of course a World famous Historical Temple of Monumental Status in the Amulet Scene for the fact that this was the temple of Luang Por Parn, Master Wicha holder of making famous Tiger Tooth and Carved Tiger amulets, whose amulets are now of the 'Maha Sethee' Millionaire master Class. If there is one tiger tooth amulet that stands out above all other carved tiger tooth, bone and ivory tiger amulets, it is the Suea Luang Por Parn Wat Bang Hia. It is the Jewel in the Crown of all Tiger amulets in the High End Collector Category of Pra Pim Niyom and Krueang Rang Niyom. 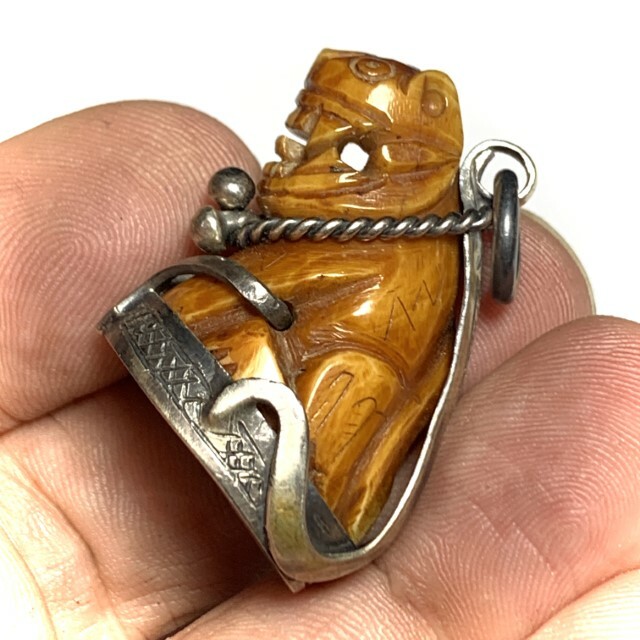 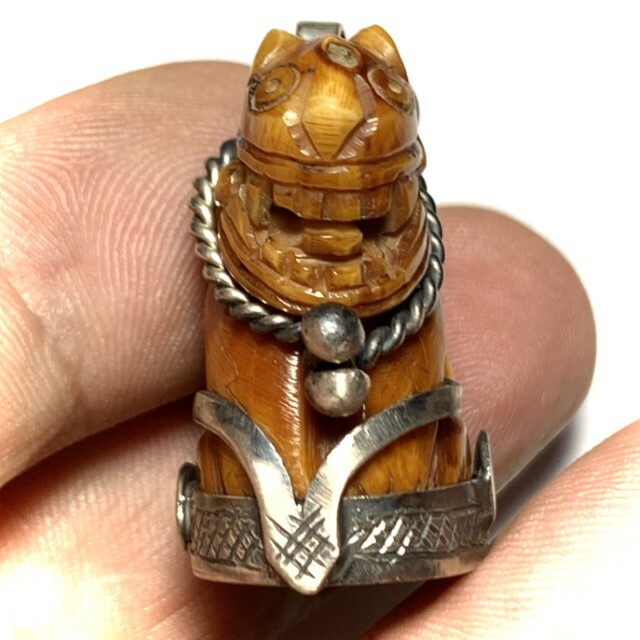 The inimitable signature markings of Luang Por Parn are evident in Khom Agkhara 'U' letter markings scratched into the surface of the amulet, where the tiger tooth was cut into two pieces for small sitting tiger carvings. Some of Luang Por Parn's tiger amulets were whole teeth with the incisor attached, and others were cut into 2 or 3 pieces, and carved into smaller tiger amulets.

There are various differing designs, all of which are inimitable, and carry a certain resemblance despite different postures and expressions. This wide mouthed grinning tiger is the most popular and officially documented, and is seen most often in high end collector magazines and encyclopedias, and in the luxurious showrooms of the Pantip Market Millionaire Amulet traders. 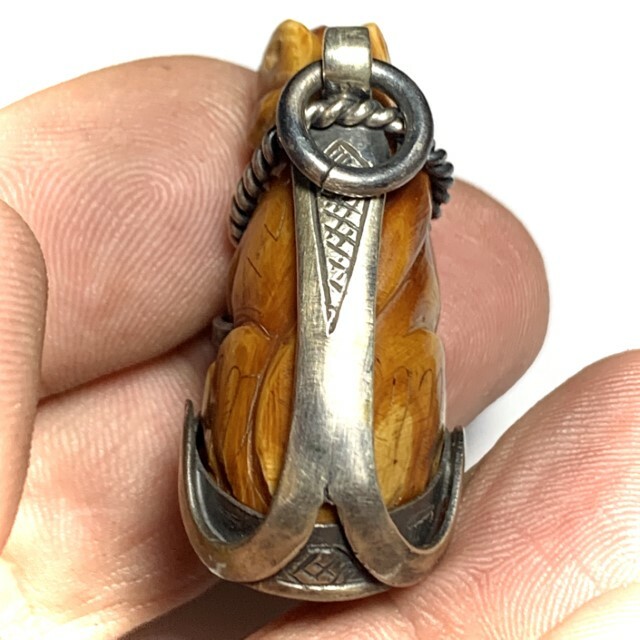 The 'Kraap" stains embedded into the groove and scratched markings on the surface, reveal the correct Aging features to enter the Era of Luang Por Parn's Time, authenticating this amulet to the highest degree. In truth, an amulet of this calibre, when viewed in a magazine or collector's auction, would rewuire a price tag 5 times the price we are asking.

Our Proprietor Ajarn Spencer,does not purchase amulets at such unaffordable prices, rather waits for the right opportunities, to obtain such Millionaire Class Amulets ate a much more affordable rate, Hence, we are able to offer such a top class Millionaire Status amulet a tiny fraction of the officially accepted auction price. 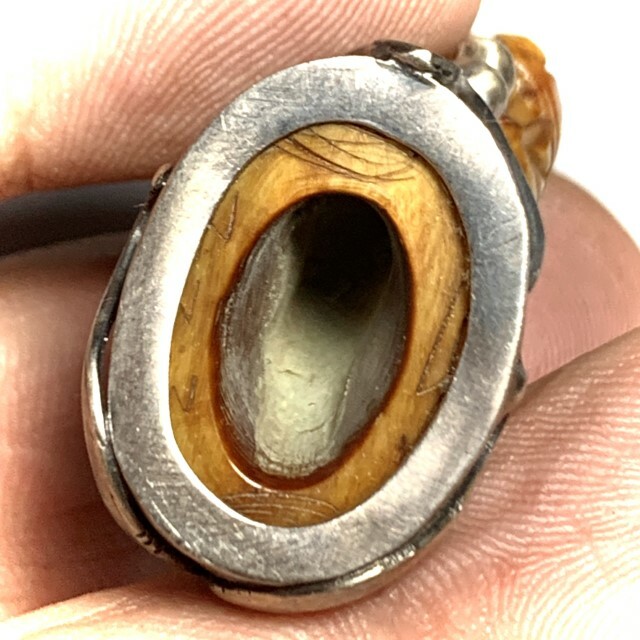 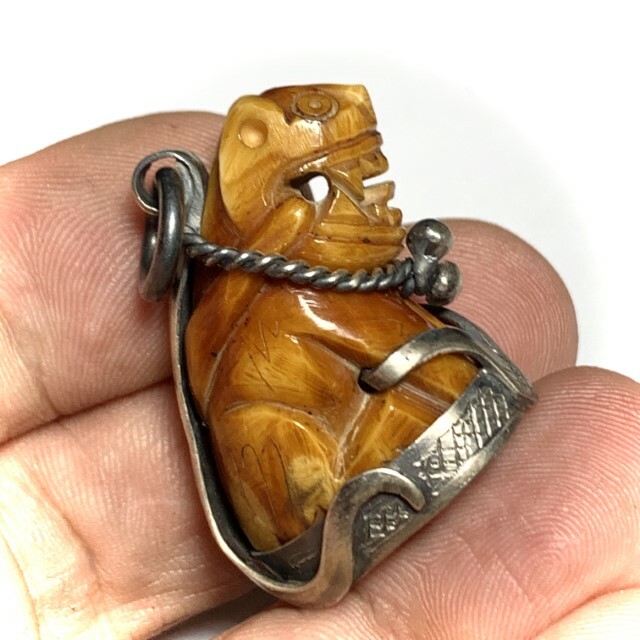 One can say that Khiaw Suea and Suea Nga, from Luang Por Parn and from his Apprentice, the Great Luang Por Nok, can be considered the top preferred Masters for this kind of Talismanic Charm. They are both immensely rare, and most often completely beyond affordable. Luckily we are patient and vigilant, and try our best to seek both beautiful, sacred and authentic example that are also affordable. It can not happen very often, for good things are hard to find, and far and few between. 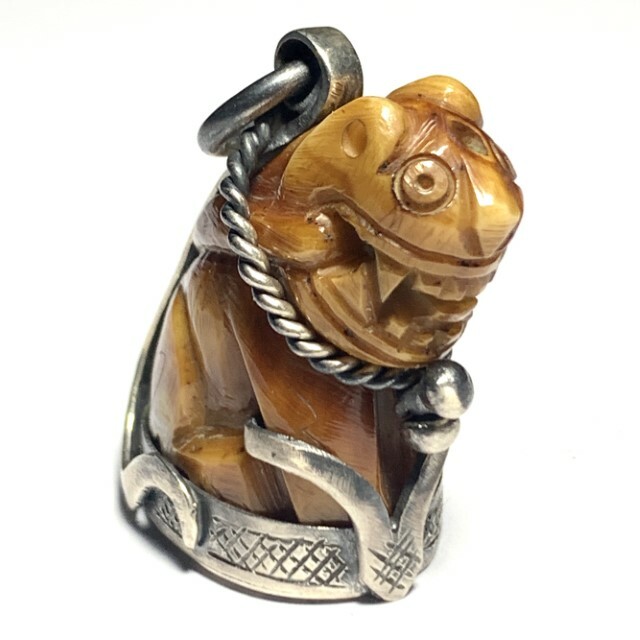 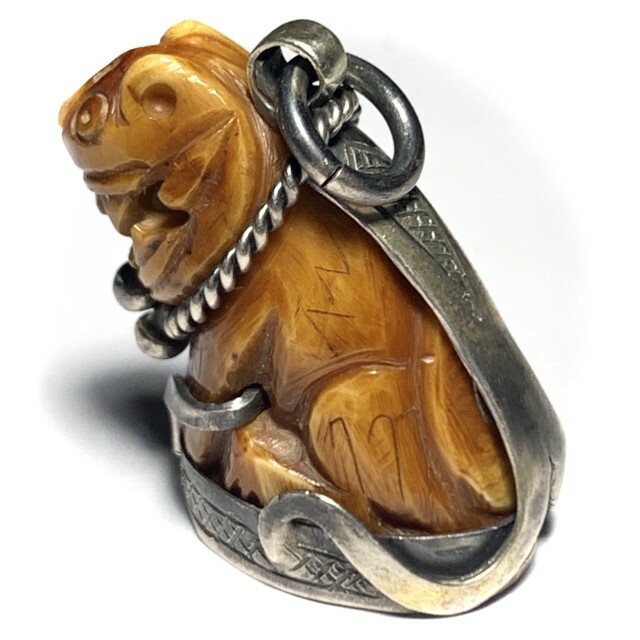 Below is a picture of a prize winning example of the Khiaw Suea Luang Por Parn, for comparison and review. The Agkhara inscriptions of Luang Por Parn are based in the Yant Got Hyaa, Khom Agkhara 'U', and the Unalome Ziga-Zag Spiral. But his inscriptions vary around the surface, and sometimes look like the Thai Numbers 3 and 7 (both of which are Zig-Zag lines). 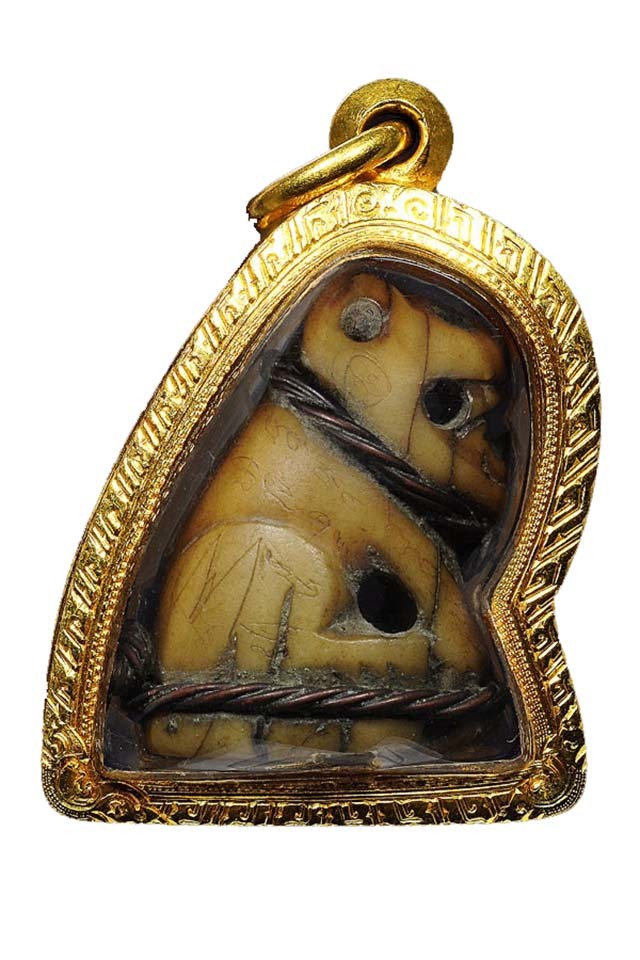 Below a closed mouth example of a famous model by Luang Por Parn, for review and comparison. Notice the zig-zag inscriptions. Notice the aging signs of the discolorations of different areas of the external surface of the amulet. 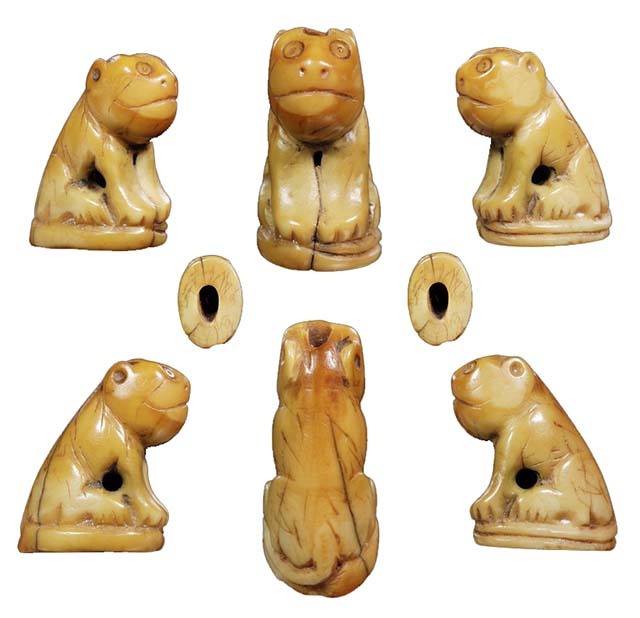 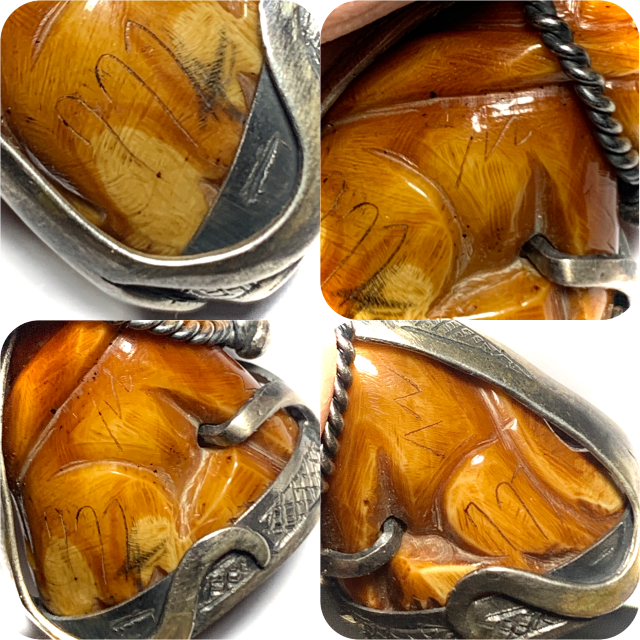 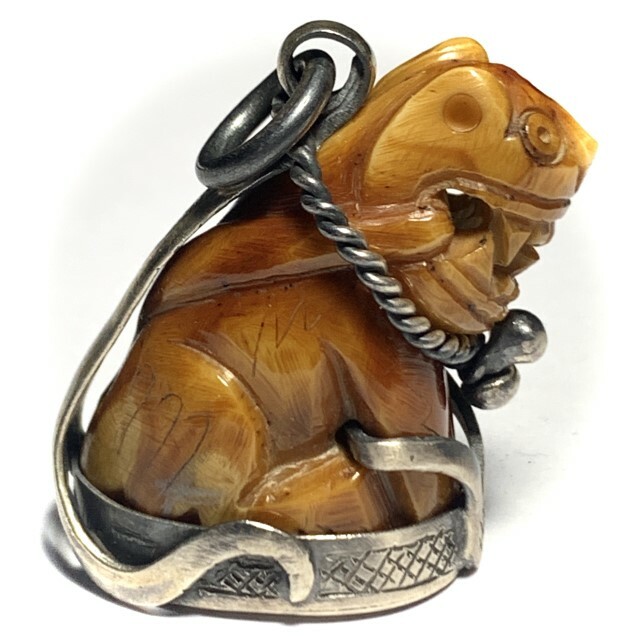