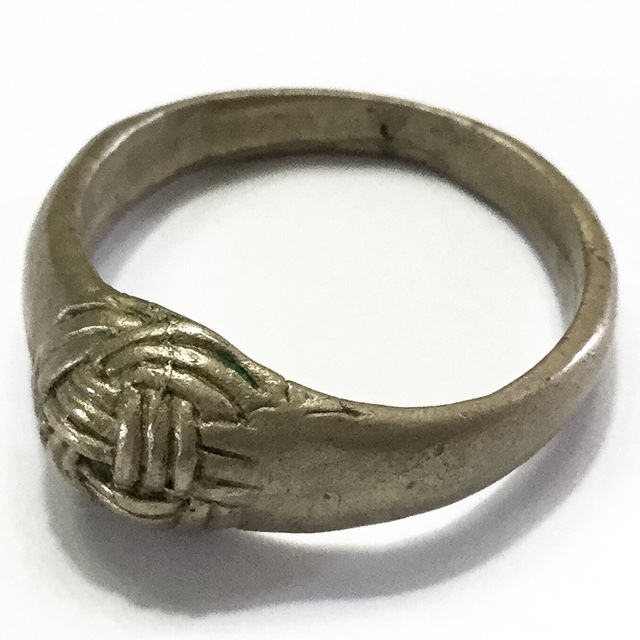 The Hwaen Pra Pirod is a Warrior's and Sorceror's Ring, imbued with Protective Magick and Maha Amnaj Power to Command both Humans and Devas. This ring is the Albaca version and much rarer than the already rare 'Tong Luang' sacred Brass versions, which have a more yellow colour to them. 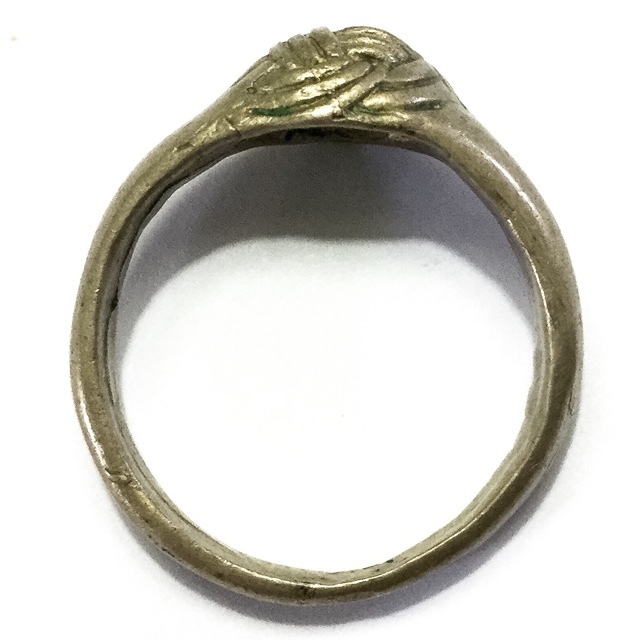 Luang Por Khwan was born on 18th September, in 2451 BE in Ban Rai District in the Municipality of Sam Ngam, in Pijit Province. He was Ordained into the Sangha as a Monk in 2470 BE during the fourth lunar waning day phase of the 8th waxing moon.

He was a Monk who developed many charitable projects and funded many construction projects for auspicious buildings for the benefit of the local citizens, such as Temples, schools, and hospitals, as well as donating large sums of money to charitable causes. 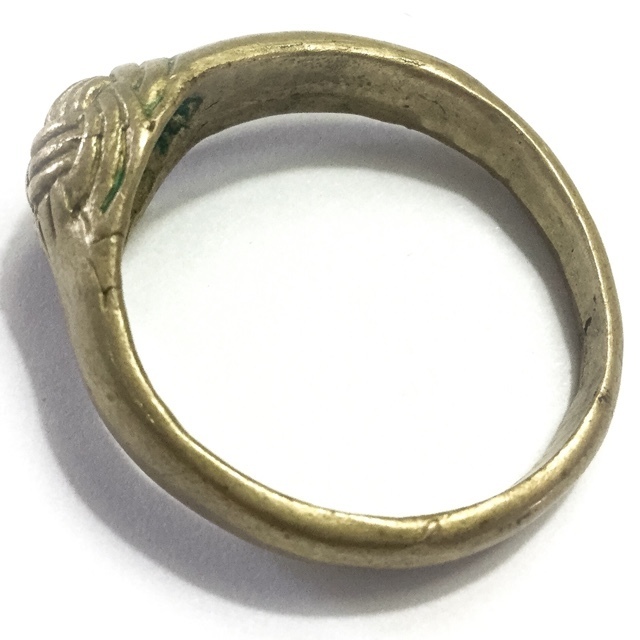 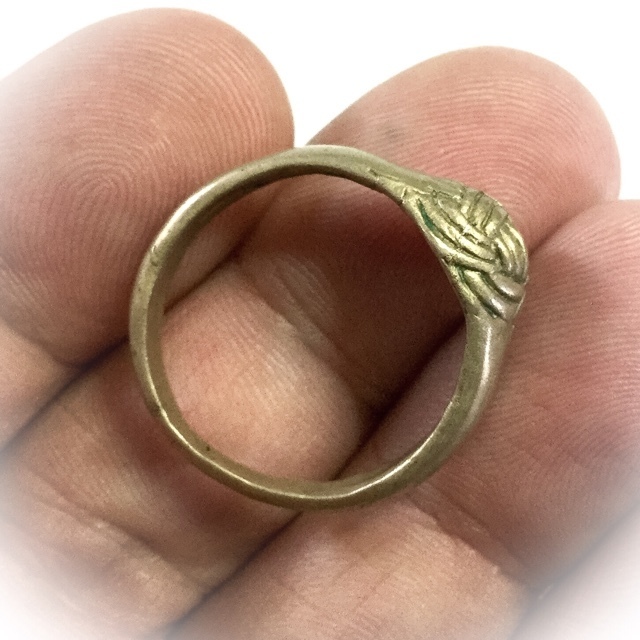 Luang Por Khwan of Wat Ban Rai in Pijit, passed away in 2548 BE, at the old age of 97 years old. There are many tales of miracle events and of his powerful amulets, which have made him and his famous Hwaen Pra Pirod the stuff of Historical Legend. 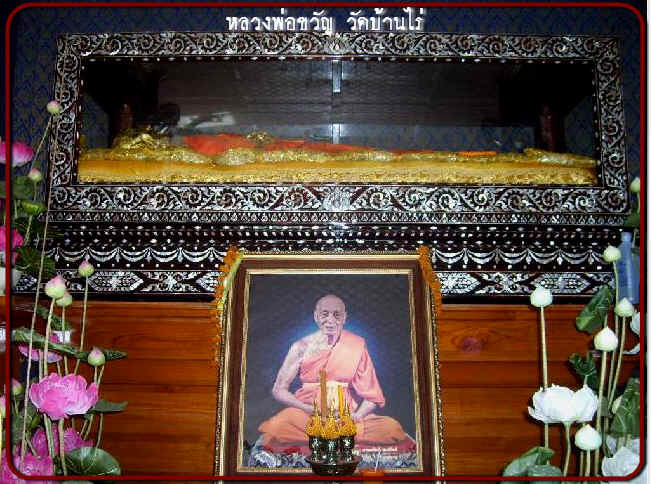 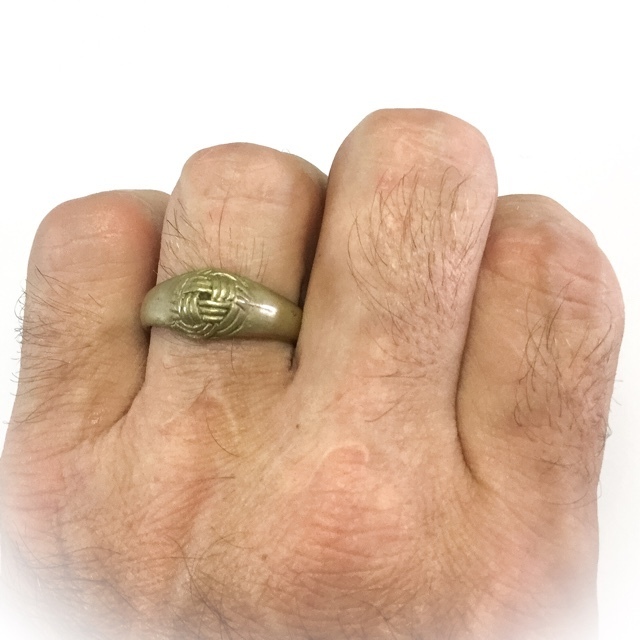 The ring measures an inner diameter of 2.2 Cm and will fit on most men's first, ring or middle finger. The ring is often worn on a neckchain either with or without waterproof casing, but some people are lucky to have a finger that fits the ring, as is the case with all rings that are not specially made to measure. 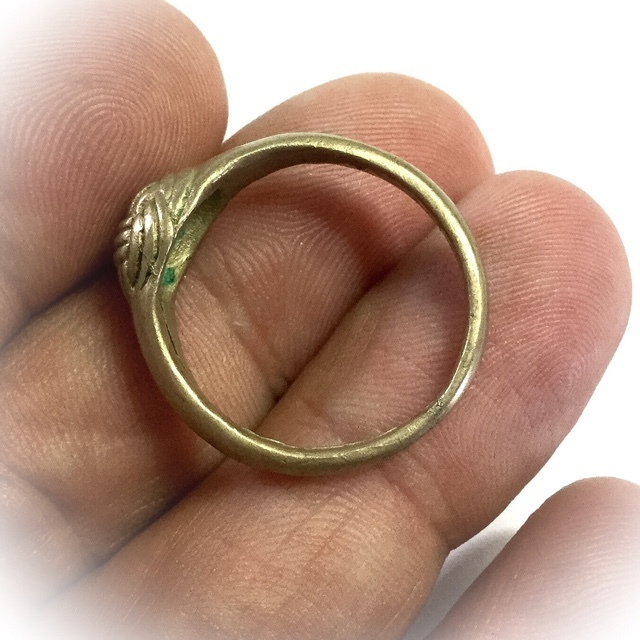 This ring will fit fingers of men with medium size fingers, on the small or ring finger. Slim fingered men will possible be able to place it on the middle finger or forefinger.

Ladies with larger hands may also be able to use this ring. As already stated, it is difficult to judge by eye. 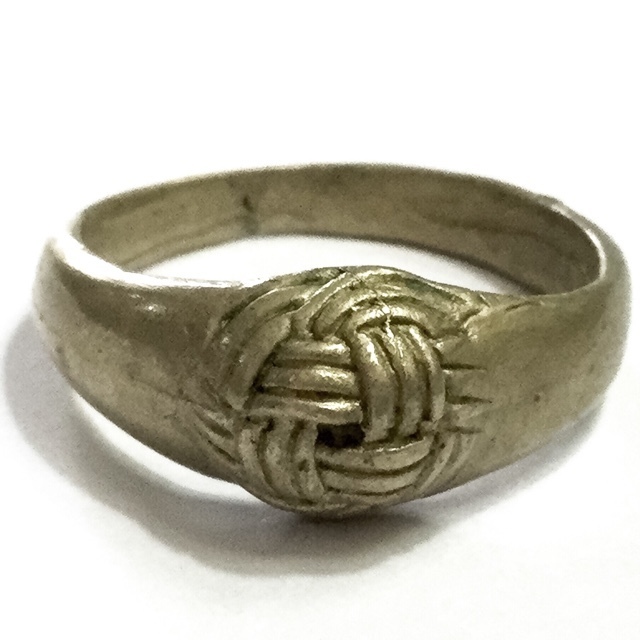 Mrs. Malay Banya Pim tells the Miraculous tale of how Luang Phu Khwan helped her husband to survive certain death. In the year 2539 BE, her Husband, who was a Praratrooper Regiment Soldier resident in the Pitsanuloke Barracks, jumped out of a plane at a height of 5,500 feet, and his parachute did not open.

Even his emergency parachute refused to open, which was when he thought he had no chance of survival, and focused on his family members and Luang Por Khwan in his mind, preparing to die. 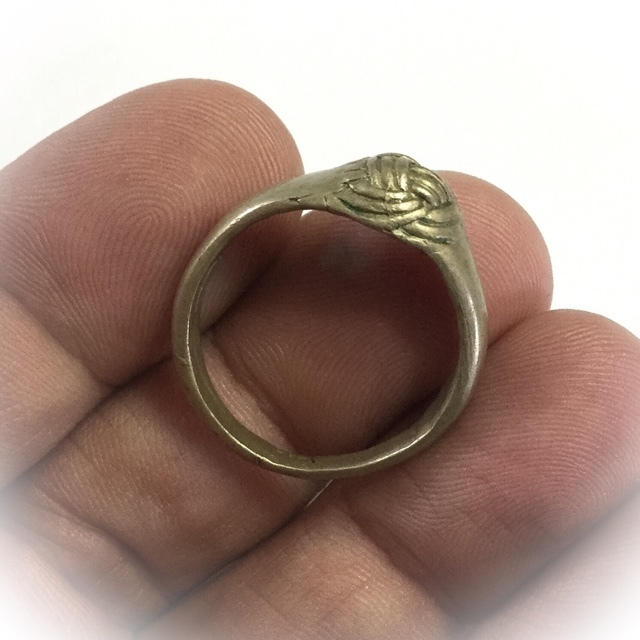 His colleagues landed and rushed his body to the hospital where the doctor warned not to raise one's hopes too high as such a high fall should result in death, or permanent brain damage as his head had struck the floor. Arms were broken completely, and he was placed 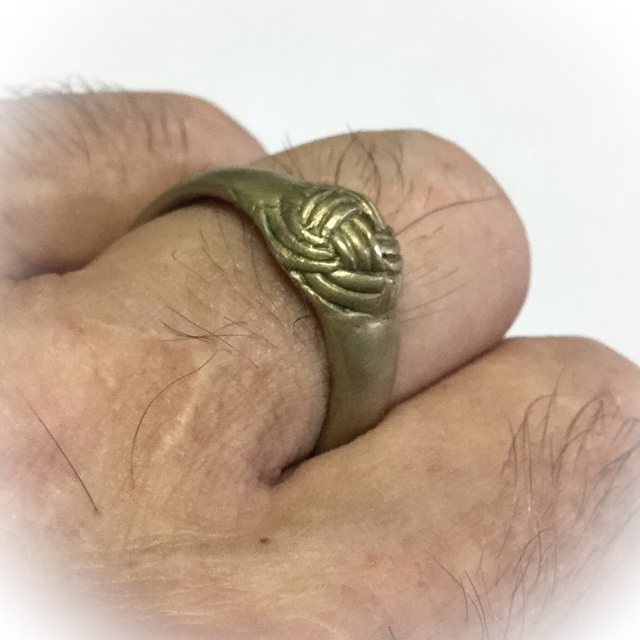 in a high emergency state ward. After some time though, he regained consciousness, and doctors were amazed to see that he seemd to be completely recovered. Then, they were stunned to find that his broken arm was completely unhurt and just as it had been before. 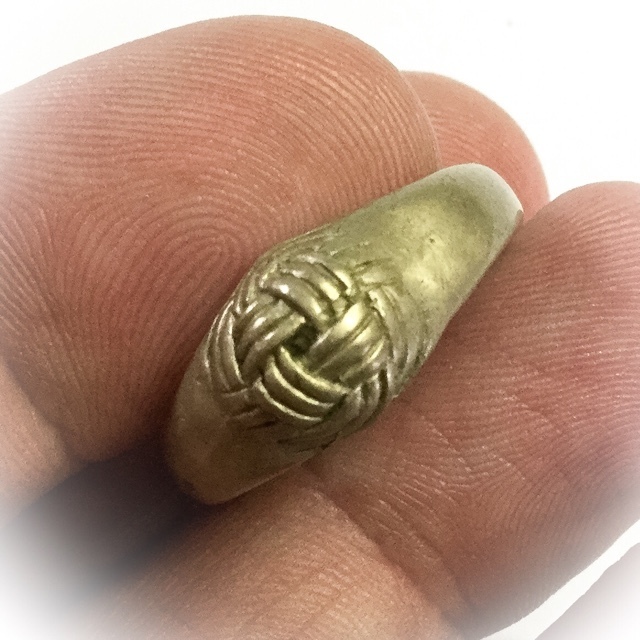 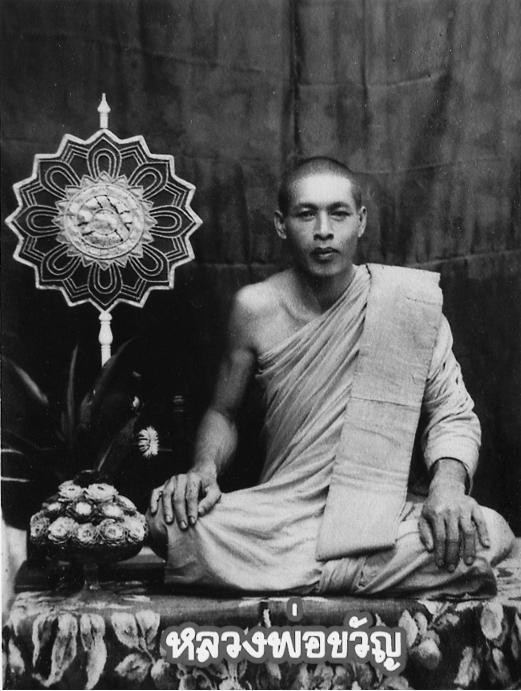 It came to light later that her husband's father had been to the temple to see Luang Por Khwan, and asked him to take the written name and address of the ward and hospital and focus on healing his son. 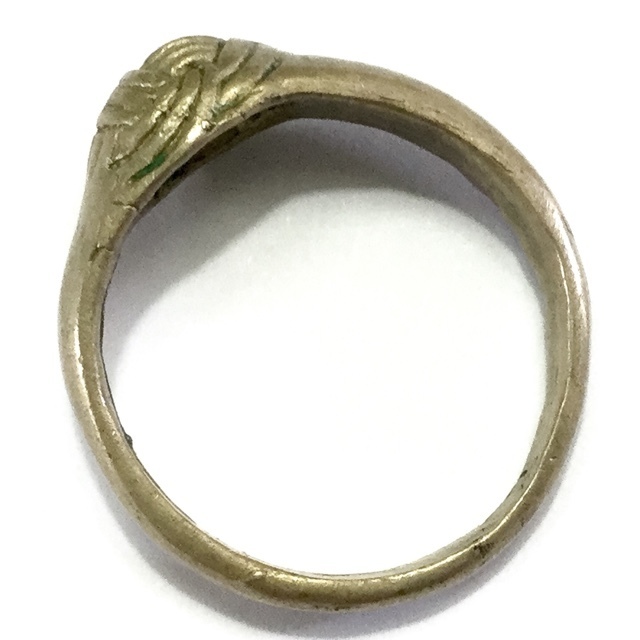 Both the ring saving him from the fall, and Luang Por Khwan's remote healing served to completely save both the man's life, and his physical health. 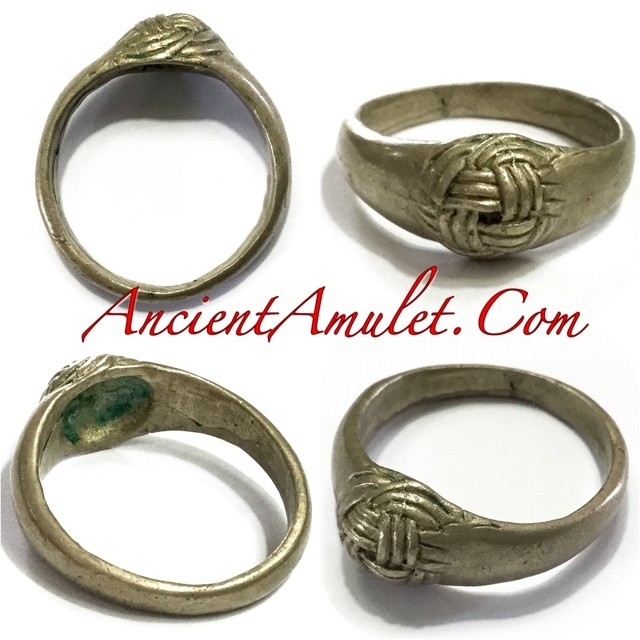