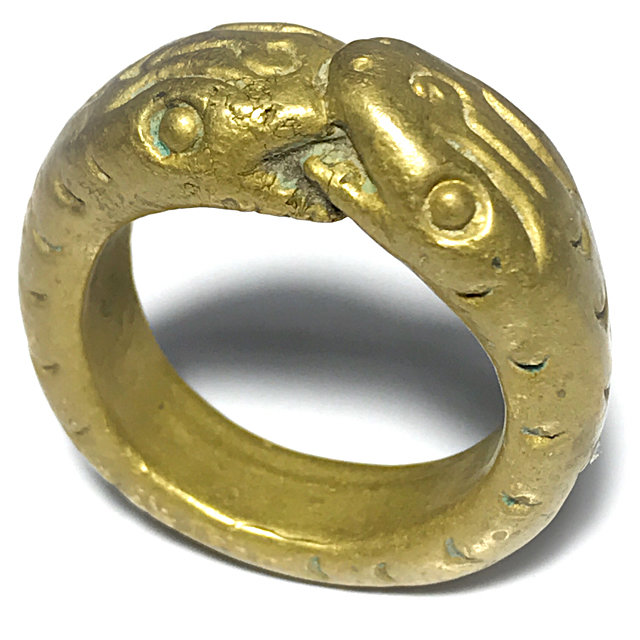 A heavy cast piece of alchemical metallurgy in the form of a wearable amulet, the Hwaen Ngu Giaw Sap Lor Boran Magic Serpentine Ring of Wealth, treasure and Protection, from Luang Por Im, of Wat Hua Khao. A truly olden days ancient amulet, forged using the ancient methods of Alchemical Mettalurgy. Luang Por Im was an olden days Guru Master, born over 150 Years ago, in 2406 BE, and who passed away more than 70 years ago in 2480 BE.This ring measures 2 Cm Inner Diameter. 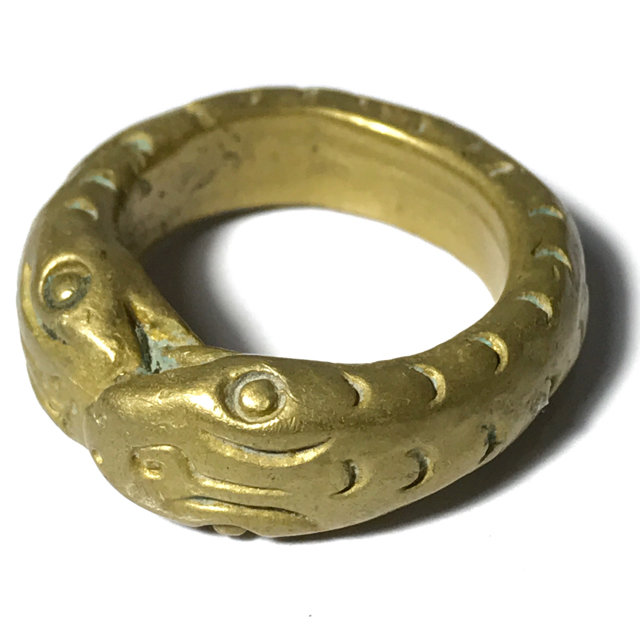 The ring is forged in a thick heavy duty gauge, and is very sturdy, made with the true olden days casting method, as was ubiquitous in those days, and is befitting an ancient amulet of this calibre. The ring is estimated to have been made sometime between 2460 and 2470 BE. The Hwaen Ngu Giaw Sap is very old and rare, and is famous for its protective power against snake bites, and its powerful Maha Pokasap magic to attract and retain wealth and treasures. This exhibit is in extremely well kept condition and is a pristine example. 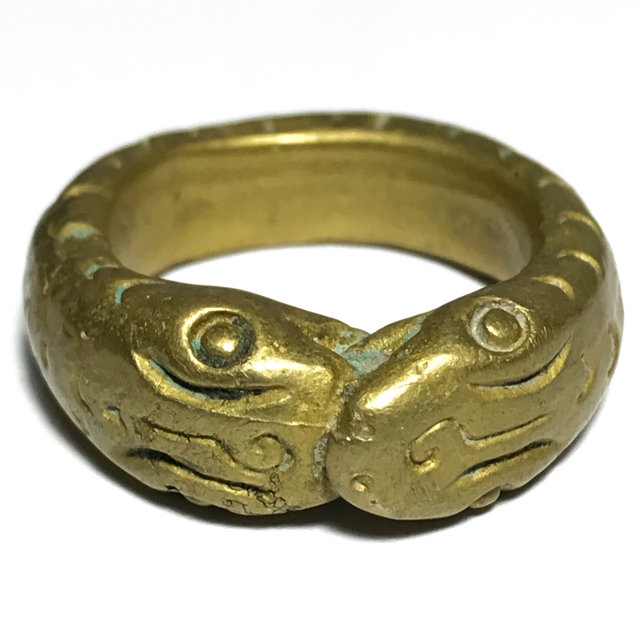 Forged using ancient alchemical formulas of metallurgy and empowered with the incantations of the ancient sorcery grimoires of the lineage of Luang Por Im, the Hwaen Ngu Giaw is a famously powerful ancient amulet of high repute. The ring itself is formed into the shape of two snakes entwined, in ancient primitive style of bygone eras, and exudes an aura of power through the alchemical metal substance. Famous for Maha Pokasap and its power to protect. 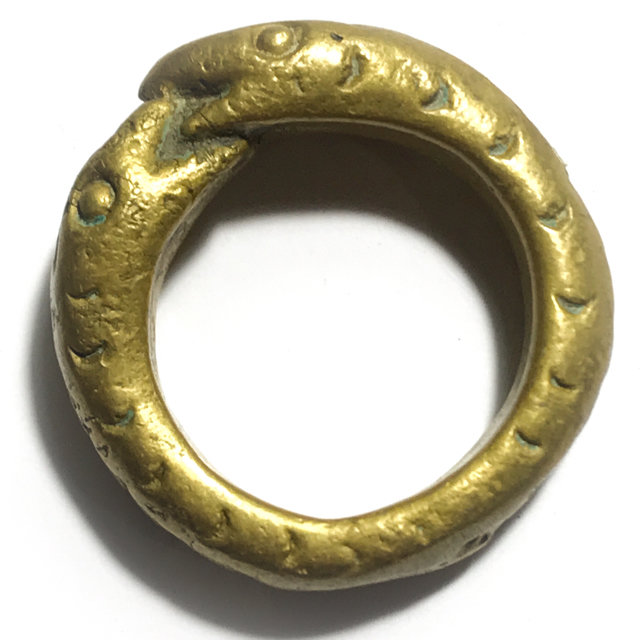 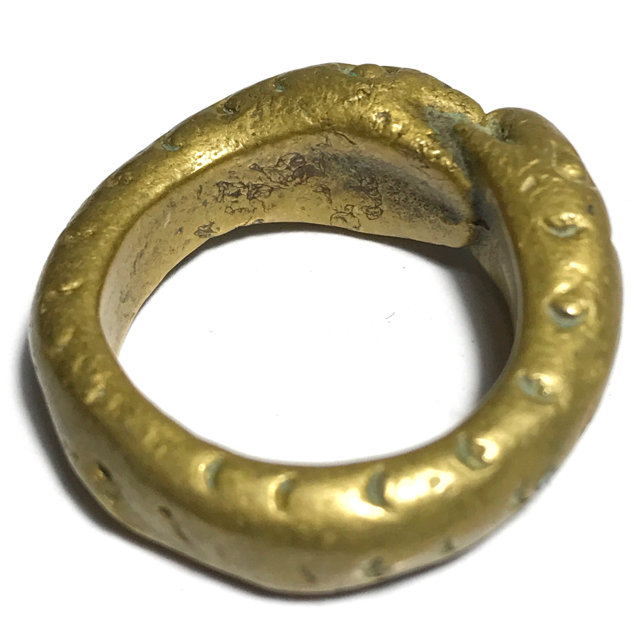 The temple orphans ran to the Kuti of Luang Por Im, and told him about this strange sight. Luang Por Im then told them that the herders were from Surin, and had powerful sorcery, and had conjured up an ilusion to hide the fact that they were using one of the wooden pillars of the Sala building to buirn and cook their rice. he then asked the temple orphans to go and bring him a coconut shell. He took the shell, and used it to sweep the floor of his Kuti with, and then told the orphans to go and check back at the Sala, to see what had happened. 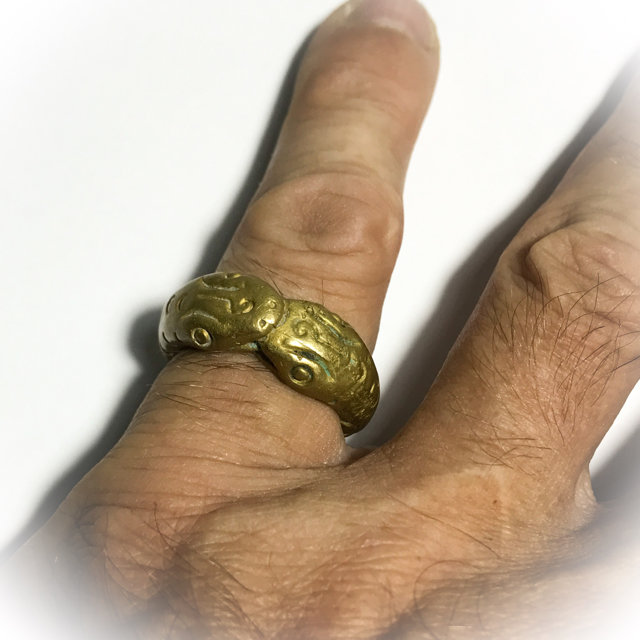 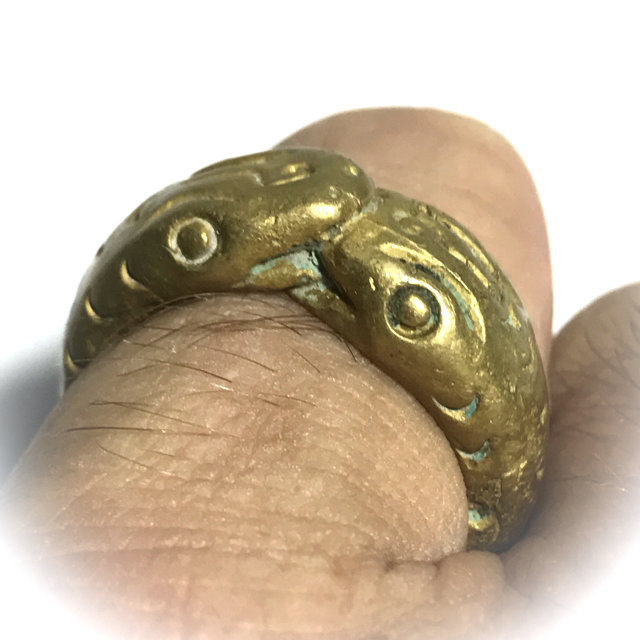 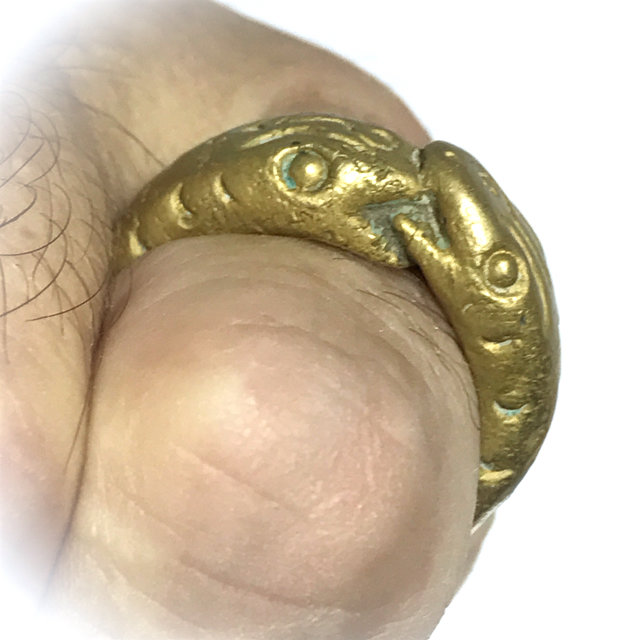 They stabbed and cut at each other without restraint, but no matter how many times they hit the mark with each other, nobody was hurt or cut, by a single blow! In the end they became so tired, and still unable to harm each other, that they gave up, and sat down together in truce, and drank some water. They talked and concluded that each of them must have something special protecting them. Ta Hnid admitted he has only one testicle and was empowered by nature with Kong Grapan Chadtri. 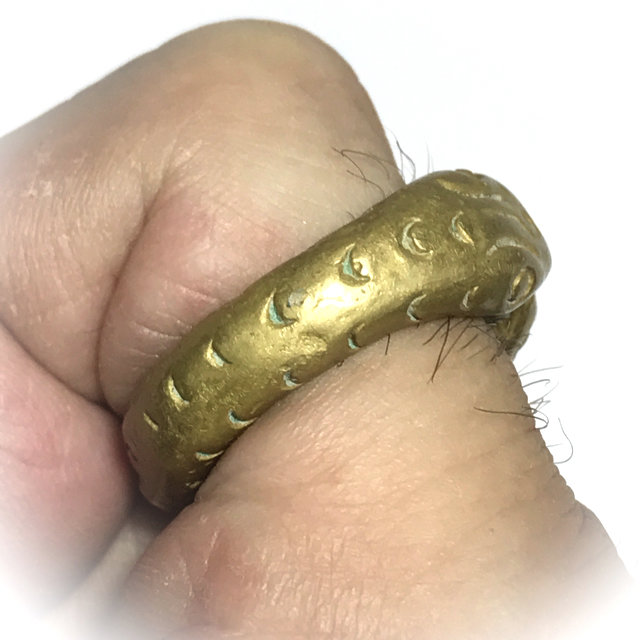 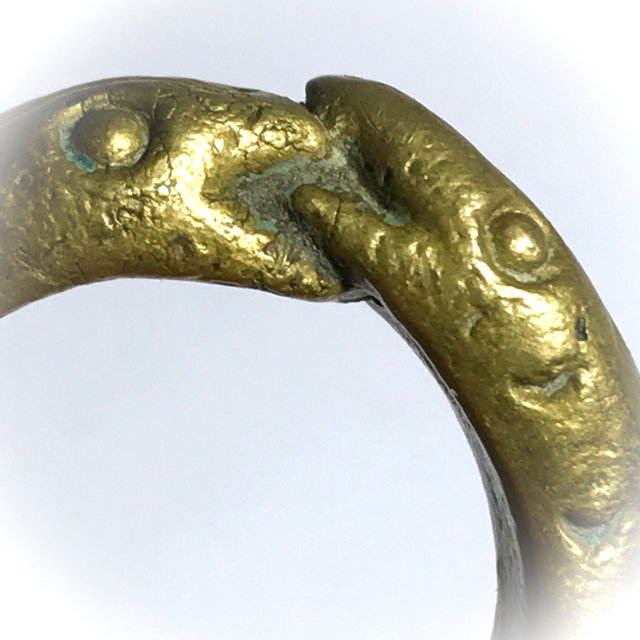 When he got home, he decided to place the fish in a different bottle, and took it out with a net. But as soon as the fish rose above water, it turned back int a folded Bai Jag leaf origami fish. This was yet another amazing miracle of Luang Por Im. 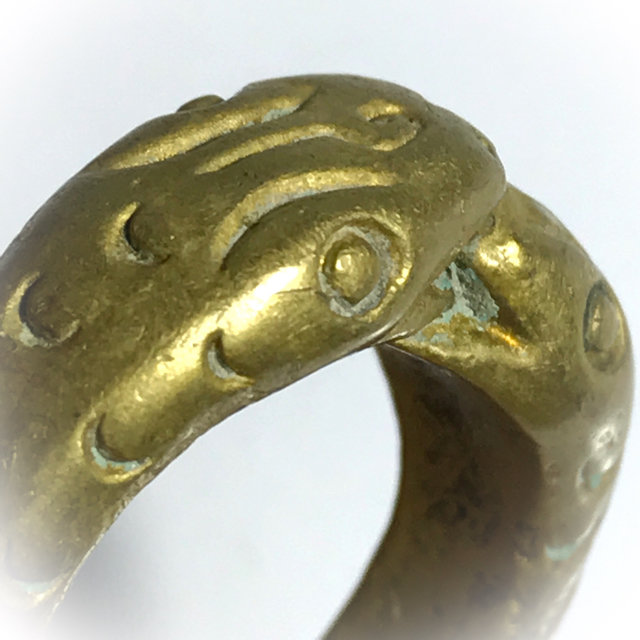 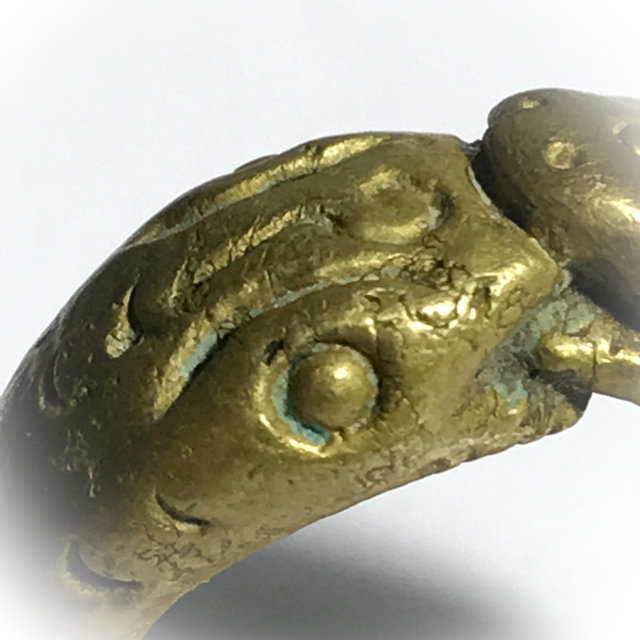 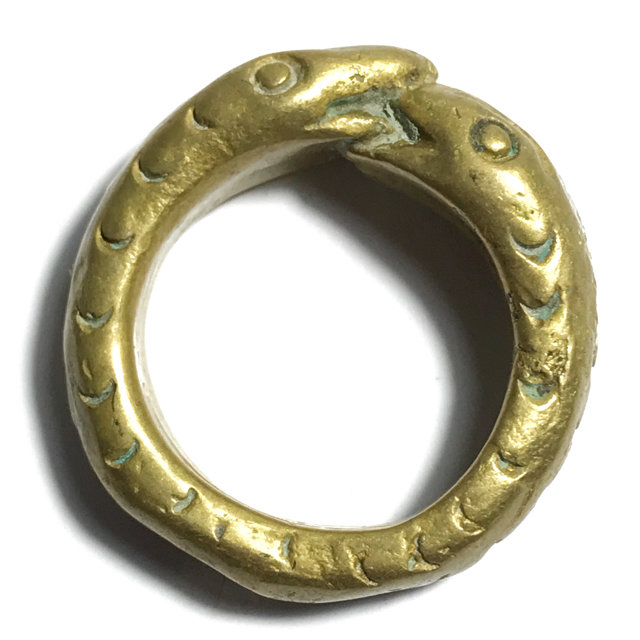 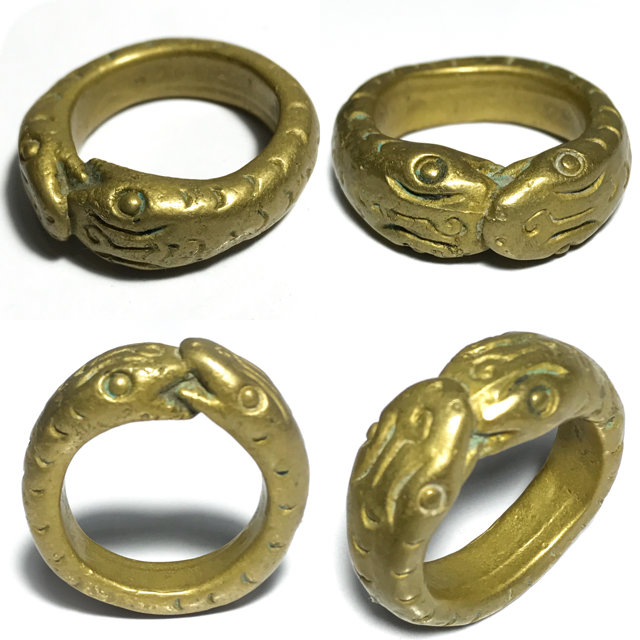