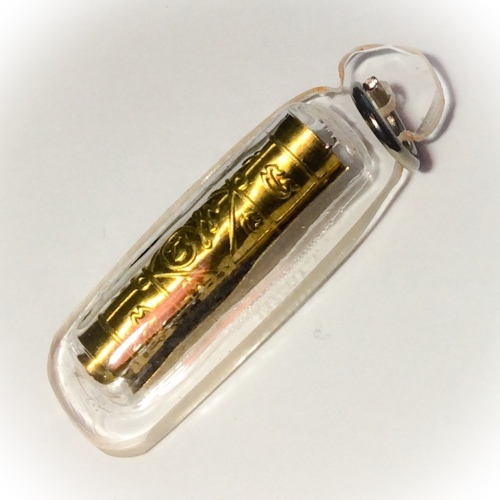 The Takrut Hua Jai Maha Burut 8 Jam Puak is derived from the sacred and ancient Dtamra reference manual Phra Ajarn Pu Tao that has succeeded from an era nearly 1000 years ago, and has continued to prove its power until now. Many Phra Ajarn from all over Southeast Asia have inherited the Wicha but none have mastered it to such an extent as Ajarn Chum Chai Kiree. 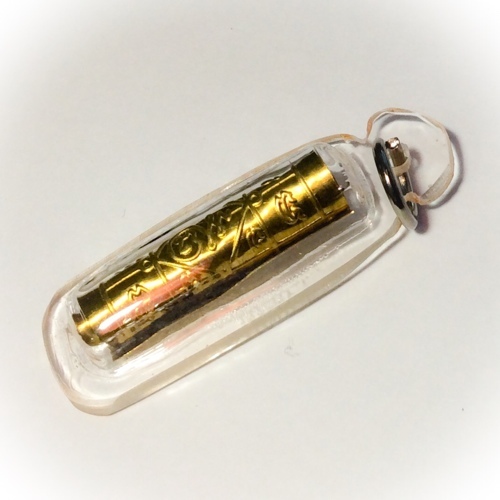 This Takrut is intended to produce Maha Lap great fortunes and succession in rank and title as well as gaining praise from superiors in a most miraculous fashion. One can gain merit by virtue of this Takruts holy blessing and is has been proclaimed that anyone who bears this magical charm and practices the Buddha Dhamma and contemplates the Ariyasat Four Noble Truths regularly will become wealthy and maintain that wealth gained, one who is unlucky will become lucky. 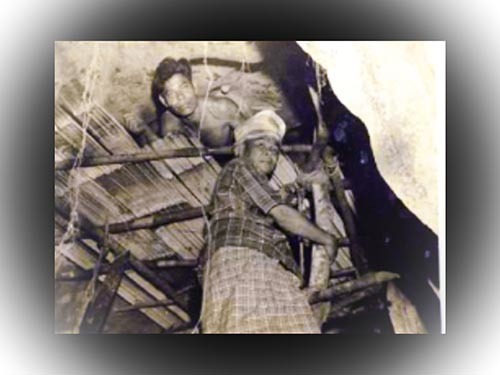 Those without rank or title will receive such, those who don't have a husband or wife will soon find themselves the love they seek, spouses who quarrel will reconcile, those who find it difficult to conceive children will soon find themselves with child, the bearer will graduate intellectually, houses will be protected, farms will produce greatly and shops owners will see great sells. 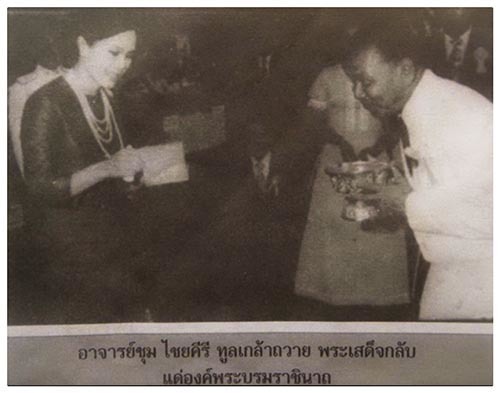 This Takrut is very particularly a Buddhist object of veneration and as such the Wicha requires merit be made in order to super charge and maintain the good fruits of ownership of this Takrut. 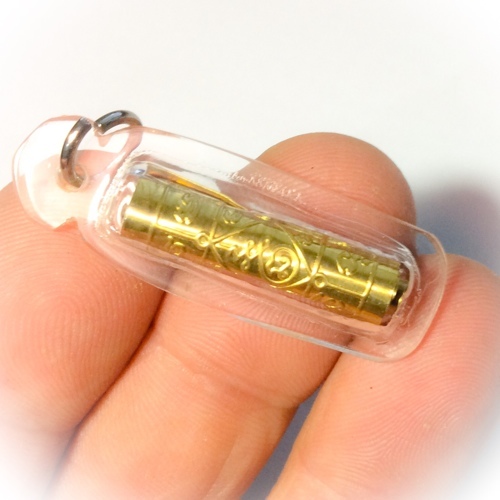 Joss stick offerings should be presented to the base of Buddha images daily (preferably the Pricipal Buddha Image at a temple), one should prostrate comtmeplting the Triple Gem revering and practing the Buddha Dhamma ensuring luck and protection from danger of any kind. 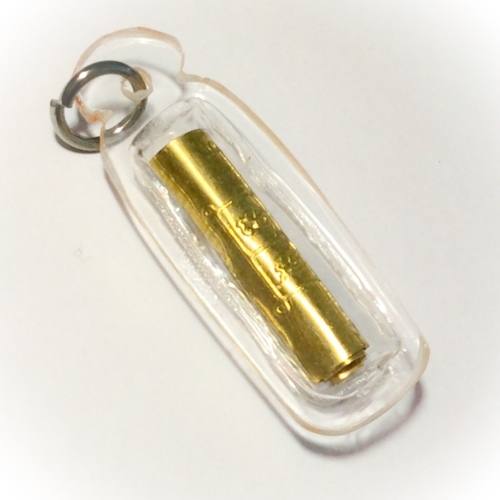 The method by which one should develop the proper conditions and mental state for veneration should be to practice a type of Vipassana miindfulness and contemplation of the Buddha by inhaling slowly keeping in mind the Buddha, saying to oneself "Poot" and exhale "Toh" (Poothoh), do this often and repeatedly and further chant "Ta Su Ni Ma" many times until your heart is content. Tests should be made on the Takrut for their power, and also those who recieved them and wear them must make an official oath to the Buddha Dhamma and Sangha to leave sinful and immoral activity forever, and to practice Metta and offerings to the Sangha. 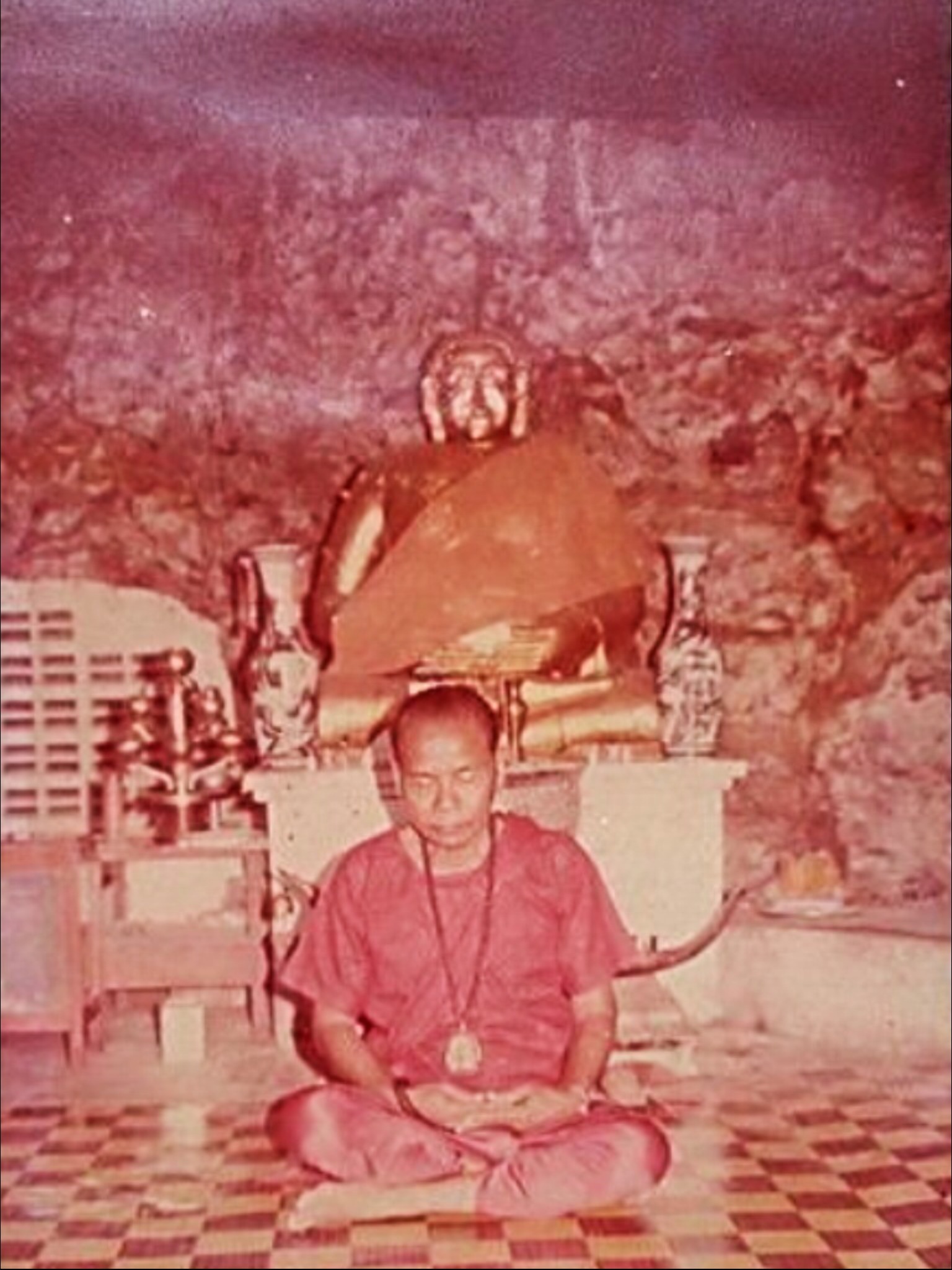 Ajarn Chum Chai Kiree in the Sacred Cave at Khao Or

It is guaranteed that if the proper ceremony is completed in accordance with the Dtamra Text and those who wear the amulet can keep these rules, they will be completely safe and protected from the predicted evils of the world that Ajarn Chum Chai Kiree has fortold and have miraculously come true. The proceeds from the orignal purchase of these Takrut went to construct an image of Pra Siwali.

The Takut are a small size golden color. They are pressed with a deep very visable and uniform Sacred Yant with Khom Angkhara spells, are the rolled and placed inside a water proof casing. 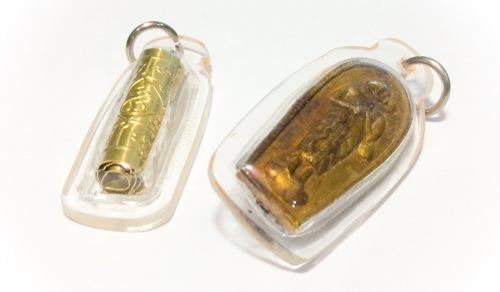 Some believers in this amulet are also devotees of another amulet made and released at the same period of time from this great Master, which is of course, the famous Rian Pra Sivali coin.  There are many devotees who believe that these two amulets come and in fact in the opinion of many, should be used together in conjunction with each other for the maximum effect it is very red to say but one can sometimes find examples of these two amulets bound together into one. They are bound in order to be worshiped as one single amulet or as a pair in conjunction.  Such examples come all versions, are extremely ratifying and a highly valued by serious devotees, of Ajarn Chum Chai Kiree.

Ajarn Chum is one of this Century's world Famous Masters renowned for his authentic powers.

His performance of Kong Grapan Magical Might, has been recorded on video for posterity in the below piece of old film documentation.