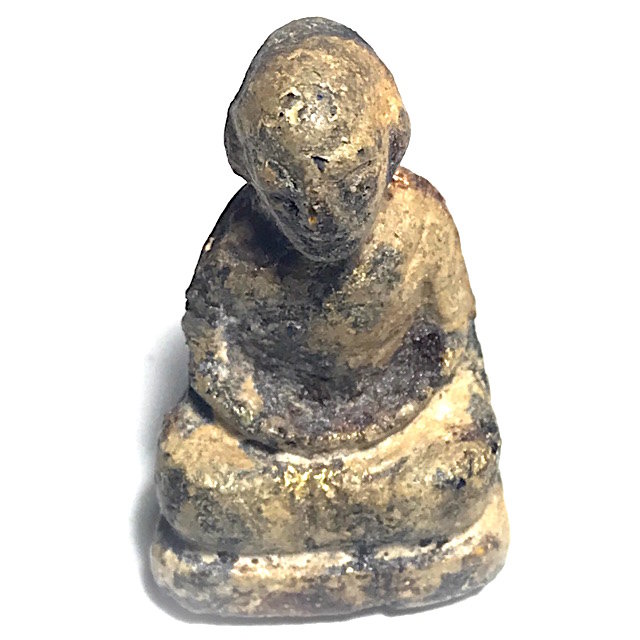 An immensely rare limited edition series Roop Lor Loi Ongk Nuea Pong Prai Kumarn statuette in the image of the Guru, with Takrut spell inserted into the base of the amulet. The Roop Lor Pong Prai Kumarn was released in the 2510 BE - 2511 BE period, from the Great Luang Phu Tim Issarigo, of Wat Laharn Rai, with certificate of Authenticity from the Luead Ban Kaay Luang Phu Tim amulet association, signed by its President Dr. Ajarn Pisek. 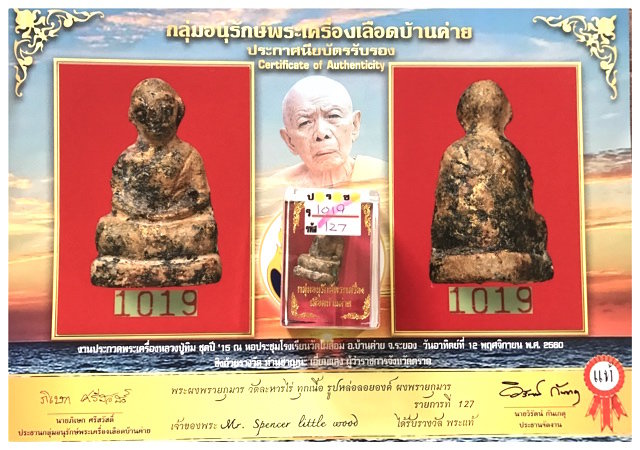 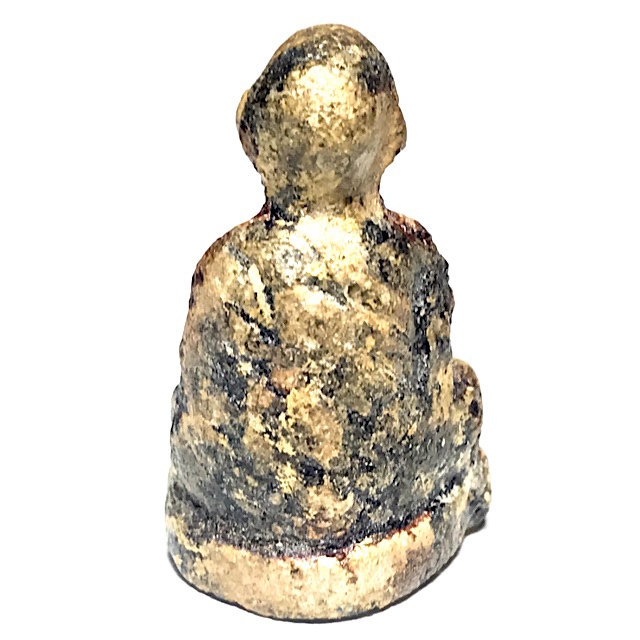 Historical documentation records that the local village chieftan was very intimately befriended with Luang Phu Tim, and asked permission to sponsor an edition of Pong Prai Kumarn amulets for Luang Phu to bless and distribute to raise funds for the temple. Permission was granted and the block press was prepared, but only a very small number of amulets were pressed, and given to Luang Phu to take to his Kuti hut and empower for the three month Traimas period. The amulets were then hidden within the Kru Hiding Place Burial Chamber at Wat Laharn Rai.

This particular series is very rarely seen, but is known about in general by the locals of Ban Kaay municipality, especially the older devotees who witnessed the burial of the amulets. But so few were made in this early series, that they are only rarely seen. This series is also prominent for the fact that the amulets were made using a mugh more highly concentrated quantity of Pong Prai Kumarn than later editions, which were mixed with more herbal powders, pollens, betel-areca, sticky rice, grayasart, or Plai Dam powders and the like. 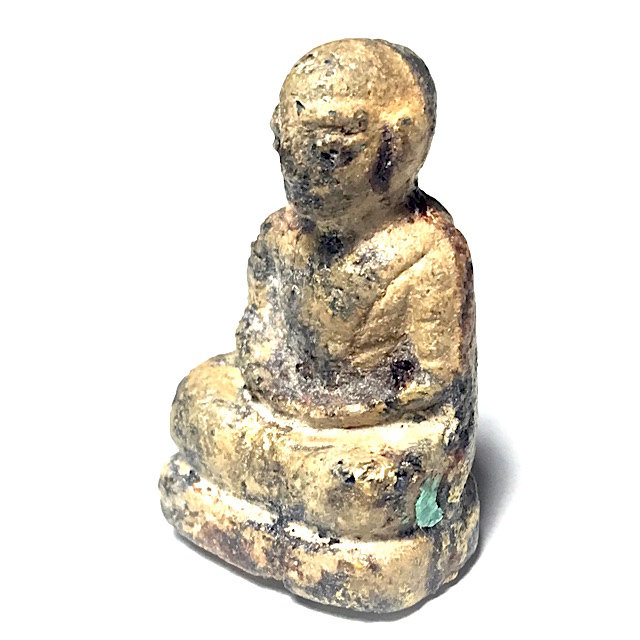 The Muan Sarn Sacred Powders of Pong Prai Kumarn Luang Phu Tim are so highly evident when viewing the surface of the amulet. The Roop Lor was entered for certification at the Luead Baan Kaay association competition meeting, on 12th November 2017, and received its official confirmation and documentation with certificate. 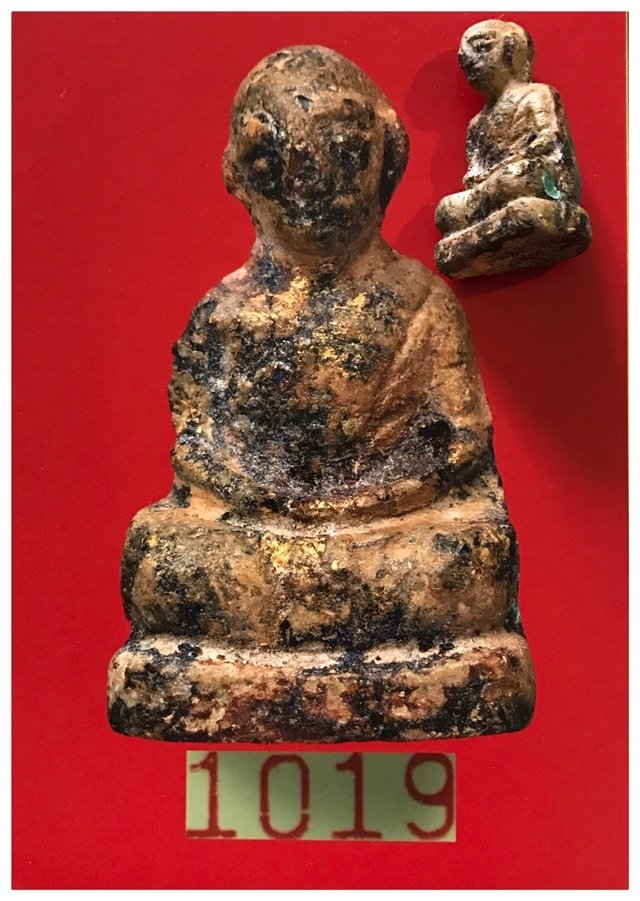 The Muan Sarn Sacred Powders of the Pra Pong Prai Kumarn Luang Phu Tim, are renowned for their power, made from the skullbone of a Hoeng Prai. Luang Phu Tim's Pra Pong Prai Kumarn amulets are amongst the rarest and most highly sought after amulets in Thailand, and are very difficult to encounter, due to having been made in small number editions, which is nowhere near enough to provide for the masses of devotees around the world who seek such an amulet as this. 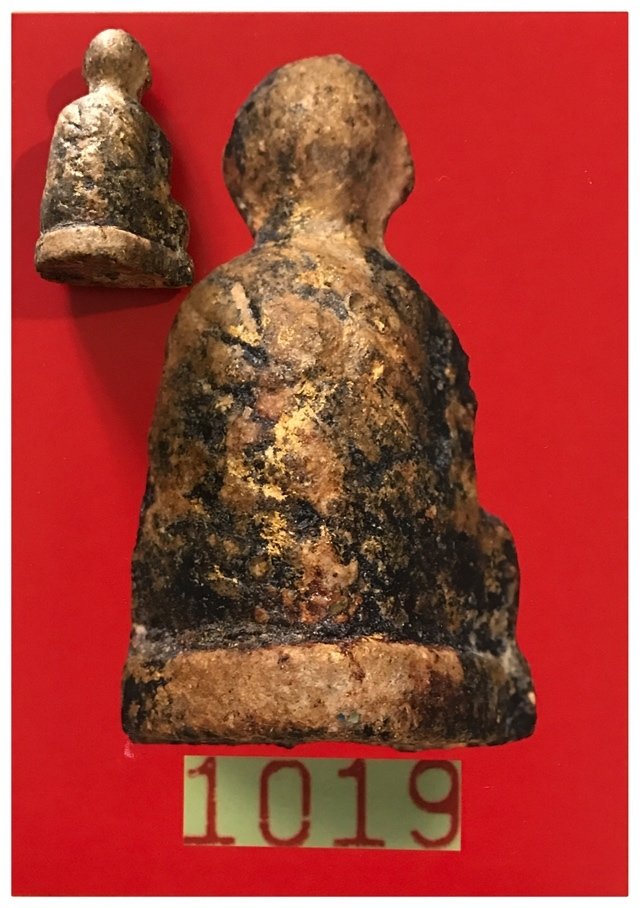 Below; a Takrut scroll spell is inserted into the base of the pra Pong Roop Muean Pong Prai Kumarn Luang Phu Tim 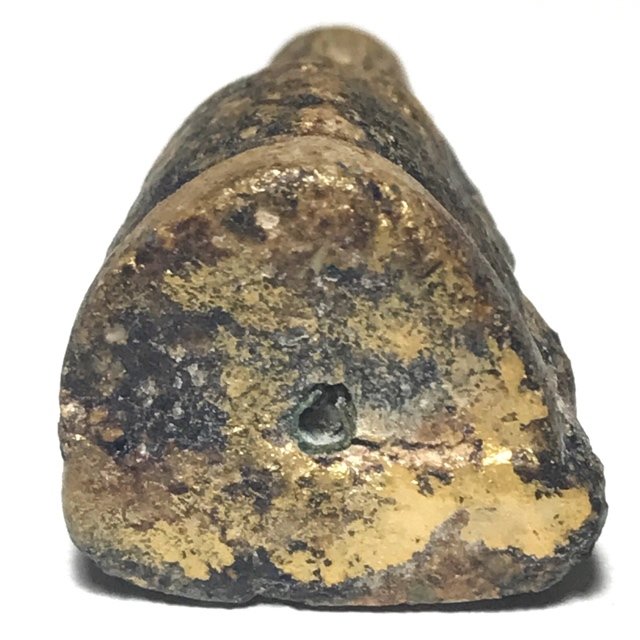 This amulet is a wonderful opportunity for devotees who seek the true power of a world class amulet from a world class edition, and also a wonderful Ongk Kroo reference study exhibit to peruse under the eye loupe. The amulet is a perfect and authentic study material, to train the eyes as to the appearance of the Muan Sarn and Surface textures of the Classic amulets of Luang Phu Tim Hence, the amulet is also a perfect 'Ongk Kroo' reference study material for students of the Pantheon, and will increase your chances of spotting an essential rarity at the right price, and without danger of risking a fakery. 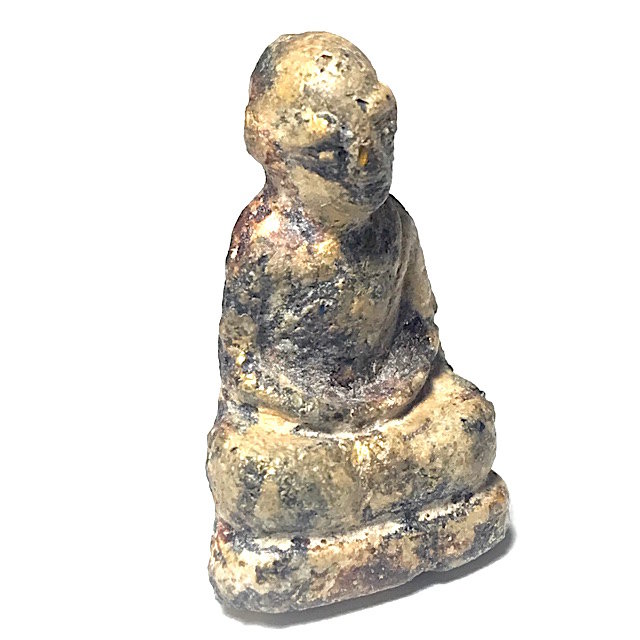 The making of the Muan Sarn Sacred Pong Prai Kumarn powders Luang Phu Tim, came from the Wicha which Luang Phu had inherited through apprenticeship form one of his high Kroo Ba Ajarn, Kroo Ba Sangkh Tao, who was also his true Uncle. Part of the formula included Pong Prai Maha Phuudt, which was made from the Skull of a male Kumarn who died in the Womb, and who died on a Saturday and was cremated on a Tuesday. This is part of the ancient Khmer Necromantic Formula for Authentic Powerful Prai Occult Magic, as practiced in Ancient Times. 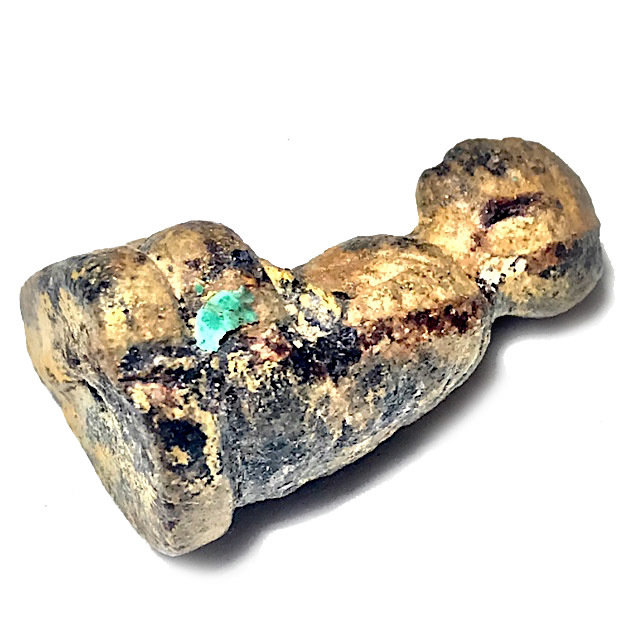 It is said that Pra Kroo Sangkh Tao's Wicha Akom was so powerful that when he spat on the floor, the floor would crack where his spit would fall. Due to the fact that Monks are not allowed to seek and find this Sacred and Extremely Powerful Necromantic Substance, Luang Phu would perform Korb Kroo Initiation for protection against Black Magic and the Phuudtaa Spirit Phantoms, so they could go forth to seek and find the substances to donate to him for the making of the Pong Prai Kumarn. 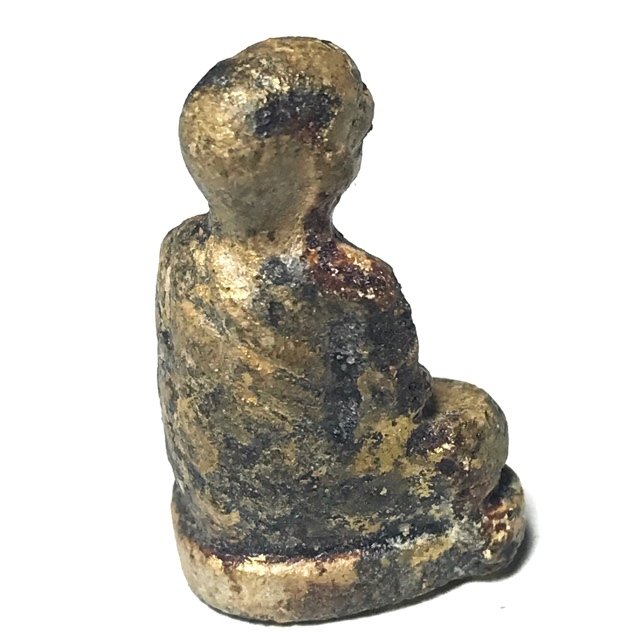 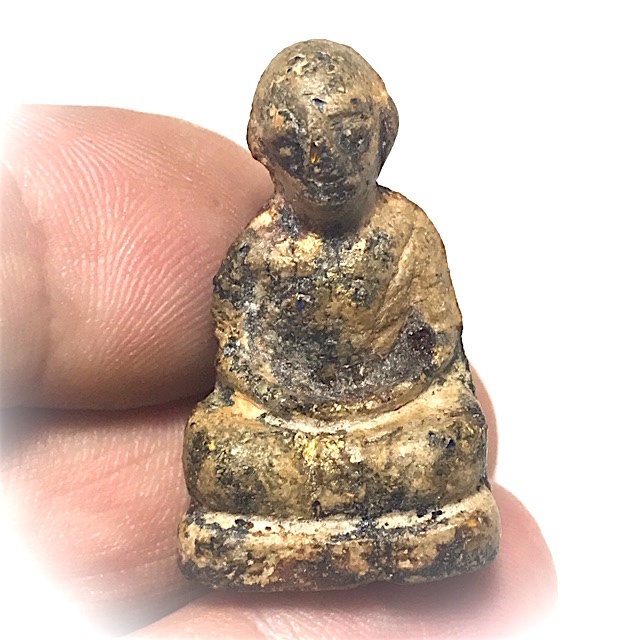 They would receive the ceremonial ritual liberation of their souls from Luang Phu Tim, who would speak with the spirits of the dead to receive their acknowledgement for the process of transformation through the Nibbana Sutra, and the Muan Sarn would then be prepared according to the Dtamra Saiyasart of Necromancy, to make the Pong Prai Kumarn. Luang Phu instructed his apprentices and the relatives of the Funerals to take care not to incinerate the whole skeleton, but to keep the skulls to bring to Luang Phu to use them for the making of the Pong Prai Kumarn. 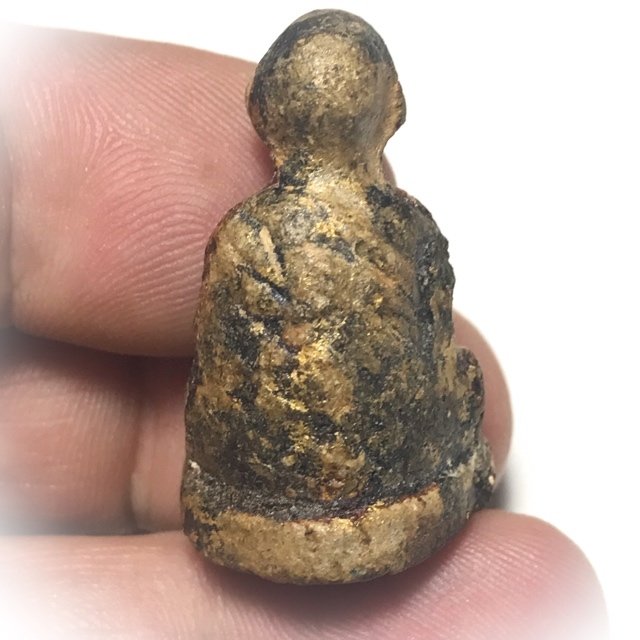 This is one of the reasons why his Pong Prai Kumarn is so powerful, because it does not contain the skeleton bone powders, rather, only those of the skulls. As a result, Luang Phu Tim's Pong Prai Kumarn has been recorded by experience of devotees to posses the highest Maha Pokasap Power of all Pong Prai Kumarn ever made, with Immense Metta Maha Niyom and Klaew Klaad Power, to induce Mercy Charm, Attract Lucky Fortunes (e.g. Lottery Winnings), and to Protect from Deadly Accidents and Disasters. 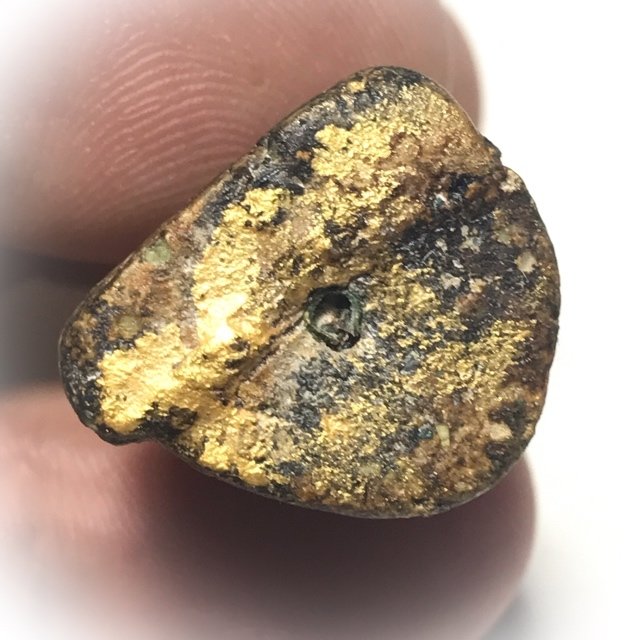 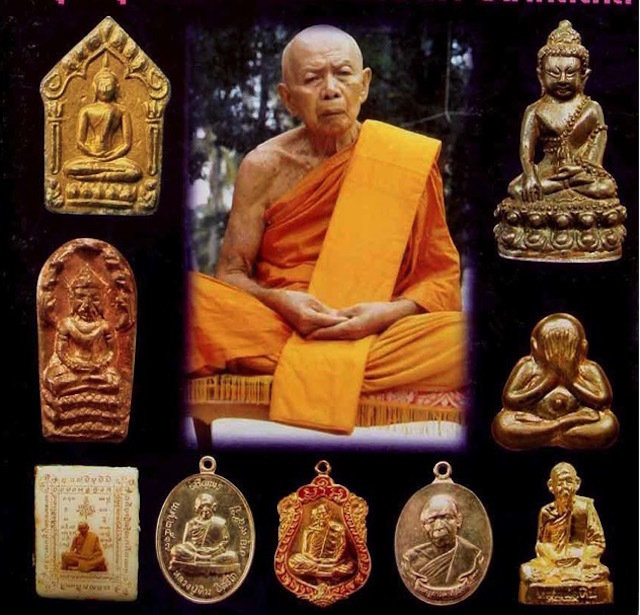 Luang Phu Tim Issarigo, is of course not only one of the most highly acclaimed and sought after Guru Monks for his amulets, he is the holder of the highest esteem in Thai Buddhist amulet history for Pong Prai Kumarn powders. Luang Phu Tim, is Internationally Acclaimed, for his famous Pra Pong Prai Kumarn amulets, and Look Om powder balls. As to the classic 'Rian' type coin image amulets which have become all time favourites, and eternally, world famous classic amulets of the high end variety. His rian Jaroen Porn, Rian Huang Chueam, Rian Traimas, Rian Sema, Rian Pra Jao Thaksin, and Rian Nakprok are amongst the most highly sought after coin amulets of all. 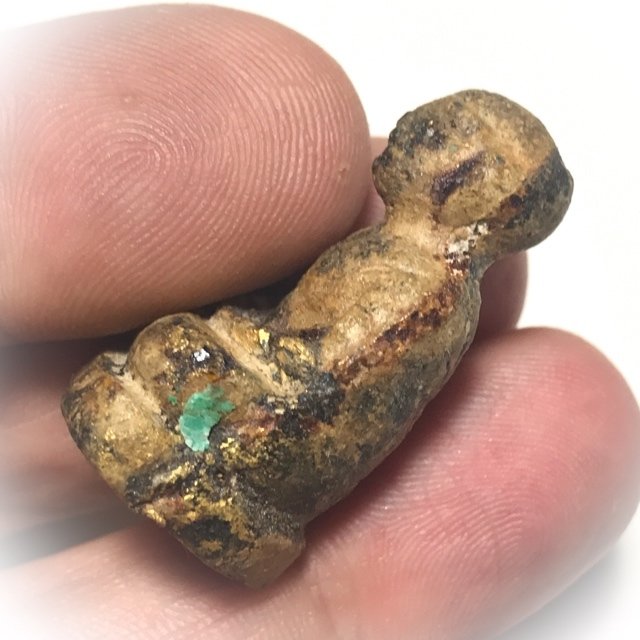 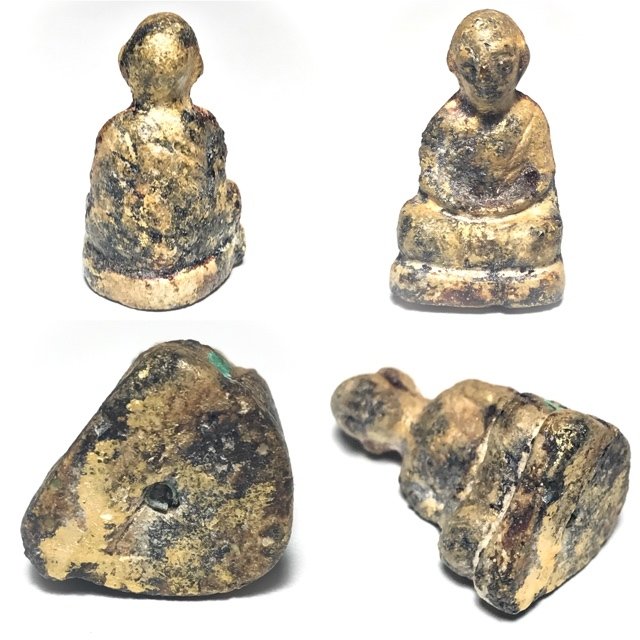