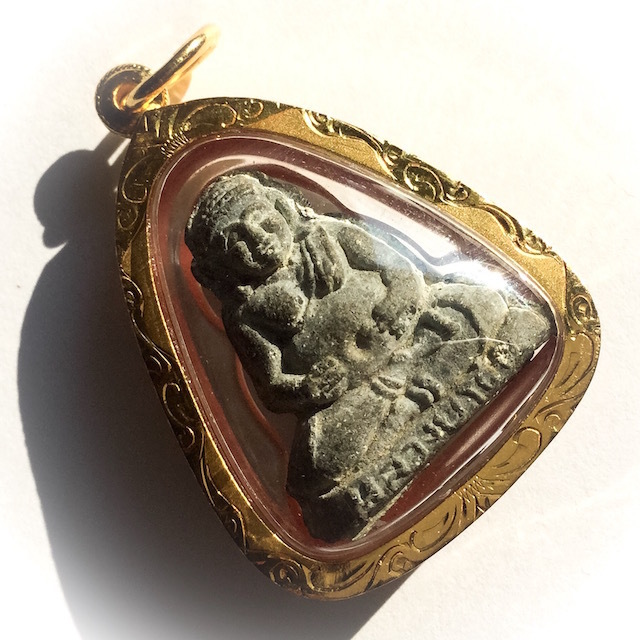 Pra Sangkajjai Nuea Pong Bailan See Tao (Gray Bailan Parchment Powders) with Solid Gold frame, and Waterproof Casing - released in 2521 BE and blessed byLuang Phu To, at Wat Pradoo Chimplee. The Pra Sangkajjai amulet was made in various versions, and in two major design models; one with hands over face (Pra Sangkajjai Pid Ta), and one with hands on lap in Meditation.

6000 amulets were released in this most classic and extremely rare edition, some were made with the insertion of a Takrut spell, and others without Takrut. making the amulet an Essential Rarity for all devotees and Collection holders of the Pantheon of amulets of Luang Phu To. 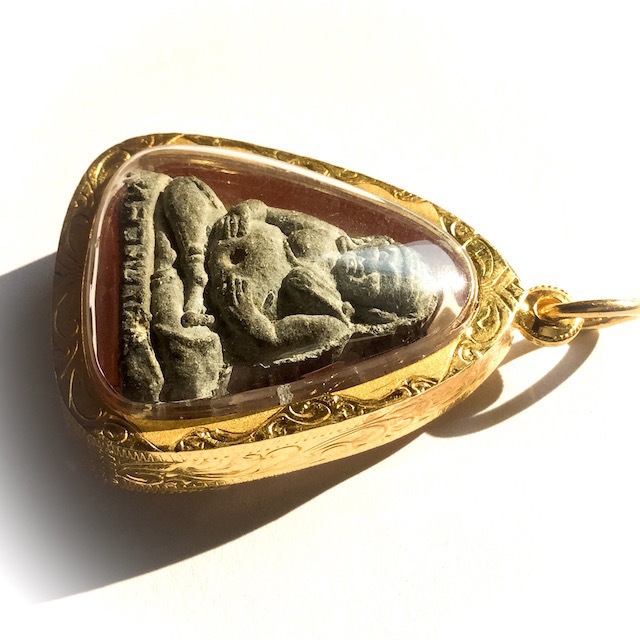 His Blessings are believed to possess the most powerful protective power, and to increase success and prosperity. His amulets are both highly revered for their sacred Power of Protection and Prosperity, but also as a connection and Buddhanissati reminder of the Great Guru master, tto beseech his blessings through the amulet. One of the most highly sought after Pra Niyom Category Amulets, which is seen to grace the pages of any and every important amulet encyclopedia, and the highly prized and jealously guarded talisman of the high end collector and devotee.

Pra Sangkajjai represents one of the Pra Sidtisawok Aedtakka (One of the Buddha’s the most admired and praised practitioners). The Buddha praised him for his ability to put long complex teachings into short understandable formulas. He has a golden tinted skin complexion, and was originally so similar in appearance and stature to the Lord Buddha, that sometimes people would mistake him for the Buddha if seen from a distance.

Pra Maha Sangkajjai was originally called ‘Ganjana’, which means ‘Gold’ in Pali. He was the son of a Brahman called Bpurohidtgajjayana Kodtra in the City of Usenni. He studied and completed the Traiwaet (Tri Veda). After his father passed away, he inherited the title of Bpurohidt (advisor to the King). This happened in the time of the King Jantabajjodti

Pra Sangkajjai had 7 close companions who cam,e with himn to attend the Buddhas teachings at Wat Weluwanaram, and after listening to the Dhamma, becamse Arahants instantly and asked to ordain. In the Turasutra it is mentioned that Pra Sangkajjai lived to the age of 120 years old.

Pra Sangkajjai Amulets. The making of amulets in the image of Pra Sangkajjai have been made since ancient times by many different Temples and Samnak.

The Sangkajjai amulet has always been a very preferred amulet and believed ot have great power, for the insertion of the ‘Puttakun’ qualities of the Sangkajjai Buddha of Metta Mahaniyom and Maha Sanaeh and forcing these powers to become a Sacred Na spell within the image of the amulet. Sangkajjai amulets are also sometimes made as Pid Ta amulet posture too, as a mix of wealth increase, and protection from harm amulet.

There is sometimes a little confusion between these two Buddhas, because some artistic interpretations of Maitreya (called ‘Pra Sri Arya Maedtrai’ in Thai) depict this Buddha as a plump sitting buddha with Bald head. This causes people to think it is the Sangkajjai Buddha.

The way to tell the difference is that the Sangkajjai Buddha will have curly balls on his head (representing the curly hairs), and the plump image of Maitreya has a shaved head.

Origins of the name Sangkajjai

Pra Sangkajjai was not called this from the beginning, but came from Thailand, when in the Radtanakosin Era, whilsst digging to place the central pillar of a temple shrineroom that was being built for a temple in Tonburi, and they found a Gajjaiyana Buddha and a Conch shell (Conches are called ‘Sangkh’ in Thai).

This temple was then called afterwards ‘Wat Sangkh Grajay’ (temple of scattered conch). It is assumed then, that the namke of this amulet came from the name of the temple, and that a double word play or ‘Chinese Whispers’ style distortion of the name occured and Gave the Ganjana Buddha the name of the temple it was found in.

The Kata for Pra Pid Ta are varied, both short and long. One of the best known ones is the Kata Pra Jao Ha Praongk (five Dhyani Buddhas) as well as the fivefold encoding of Namoputtaya of Na Metta;

The above Kata is Maha Saneh Choke Laap – luck and fortune, and charming power.