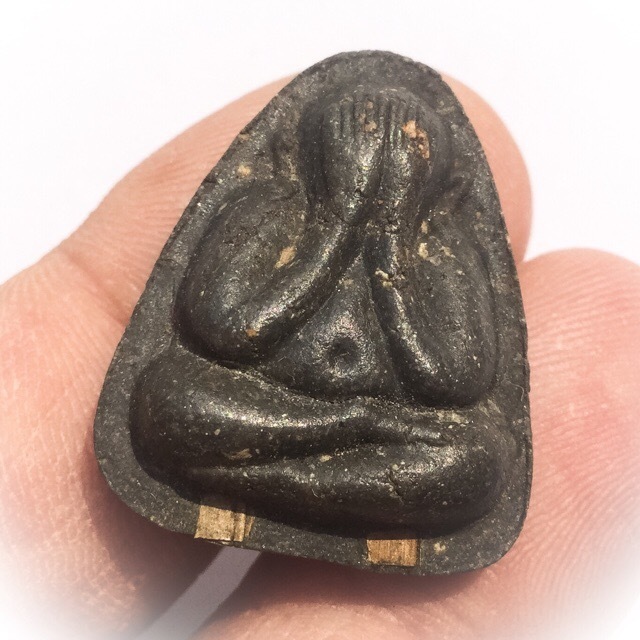 This amulet is extremely rare due to the fact that only 10 of this series were made in Pong Bailan with Takrut Tong Kam Koo Double Gold Takrut in the Base, and released at the ceremony to certain individuals. 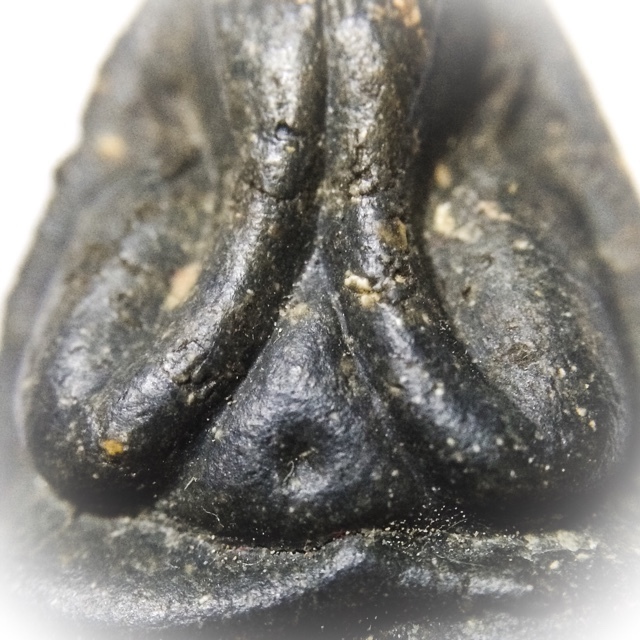 Our contact was at the ceremony back then, and rented a large number of amulets, recieving this as a special Gammagarn model for his large donation. 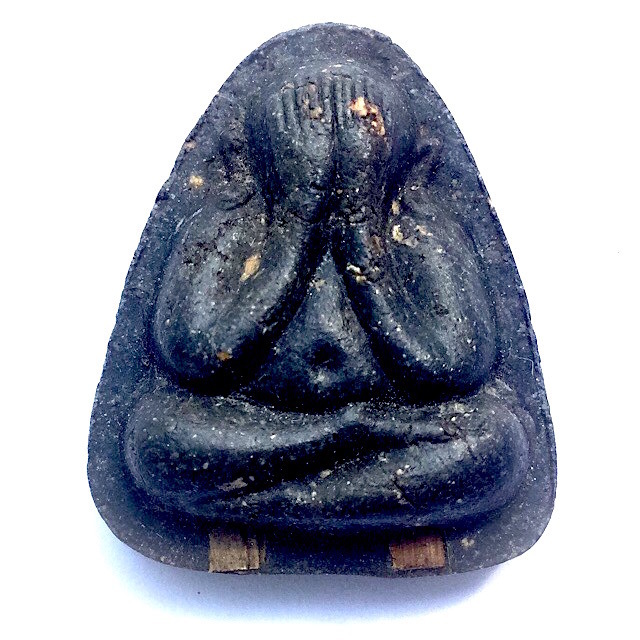 A special Ongk Kroo Model was also released with only 100 Models made with 1 Gold Takrut, and 1 Silver Takrut. Then, a Further 10 Only Extra Special Models were were released as Gammagarn Distribution Models with 2 Gold Takrut in the base. 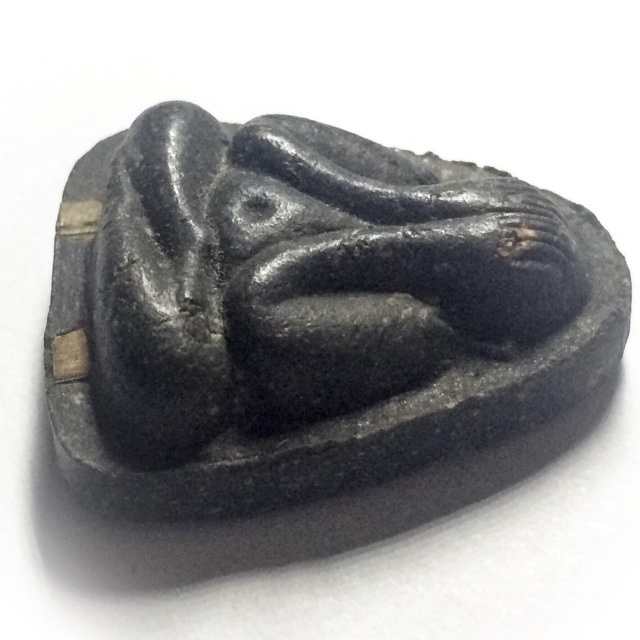 Released 2522 BE with Luang Phu To performing his Empowerments and Blessings. The Pid Ta Maha Lap Na Ta Na Amulet has a different Yantra on the rear face to the Maha Lap Jumbo and Plod Nee Versions from the Traimas 2521-2523 Edition, and is a Highly Distinguished Amulet. 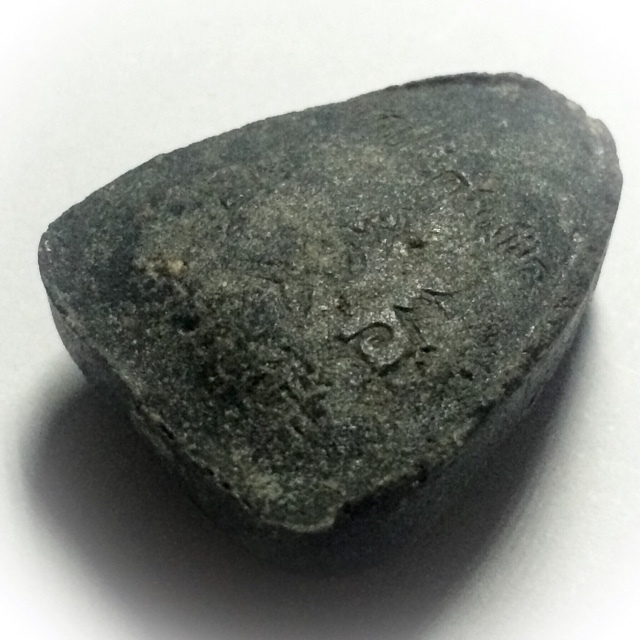 The Pra Pid Ta Na Ta Na is small in size, at 3 x 2.5 Cm is fitting for both Ladies or Men to wear. Solid Gold Custom Casing is available for free if wished for this Amulet. 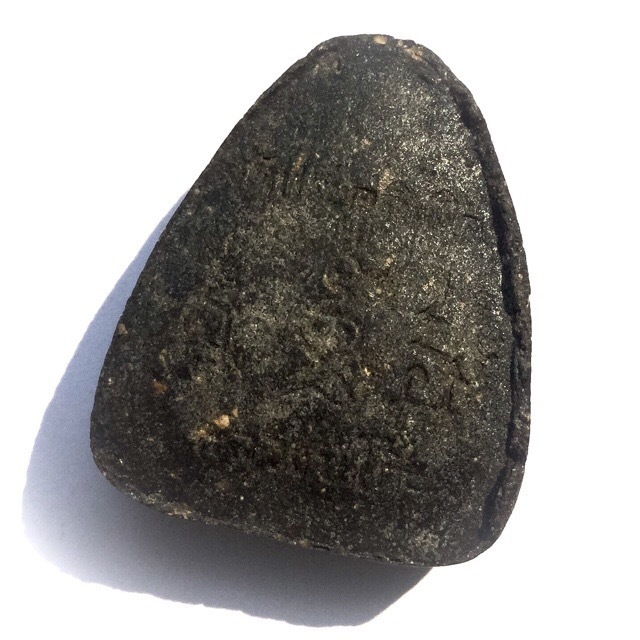 This Pid Ta is a Pra Niyom Category Amulet (Preferred Master Class Status), and belongs to the Classic Preferred Editions which were blessed and released at Wat Pradoo Chimplee. There are many other Pra Pid Ta amulets from this great master which were released in other smaller temples, some of which are more affordable, and others are also rare and highly revered and worshiped. This particular Gammagarn amulet has only 10 in existence, and is hence an extremely rare amulet. 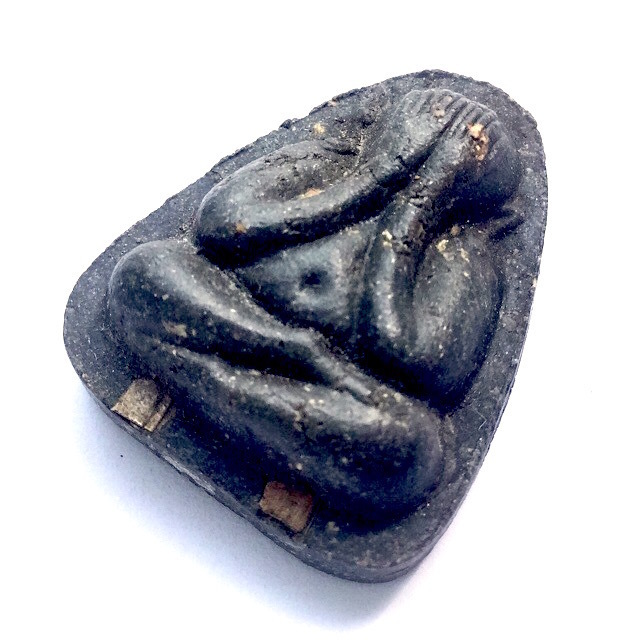 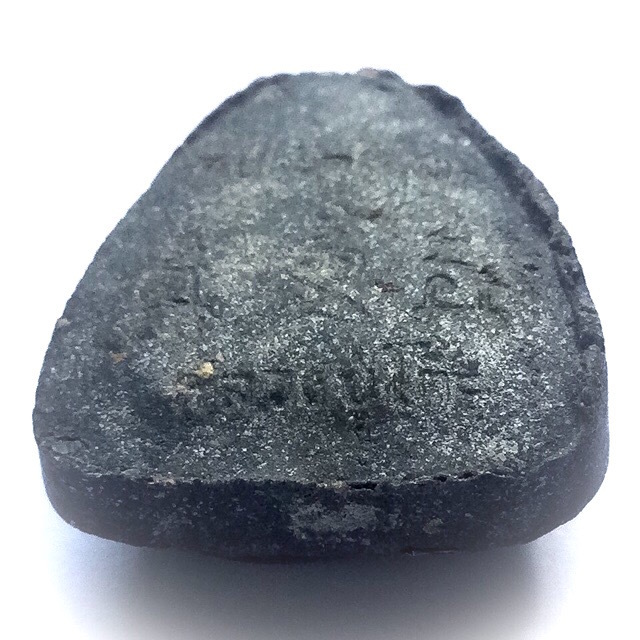 However, due to certain editions having Miraculous Events in the News making them more famous and popular, as well as the Collectorship Scene and the Appreciation Societies who Value and Catalogue the various editions, have valued certain models and series editions such as this extremely rare Gammagarn amulet of which only ten were ever distributed, to become extremely expensive for their Master Class Status. 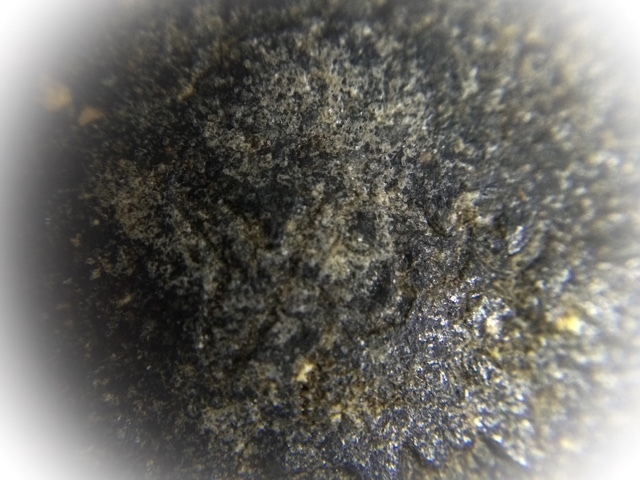 It is therefore not necessary for somebody who merely seeks a powerful amulet, to buy the more expensive models, and with a bit of effort to study and make wise decisions, one should choose always what is within one's own budget. For those who seek a Sacred Powerful Amulet blessed by this Master, there are many more affordable alternative editions to the Pra Niyom Master Class editions, which we hope to provide ever increasingly along with detailed explanations of each edition and series, so that you can distinguish the differences and make your choices accordingly. 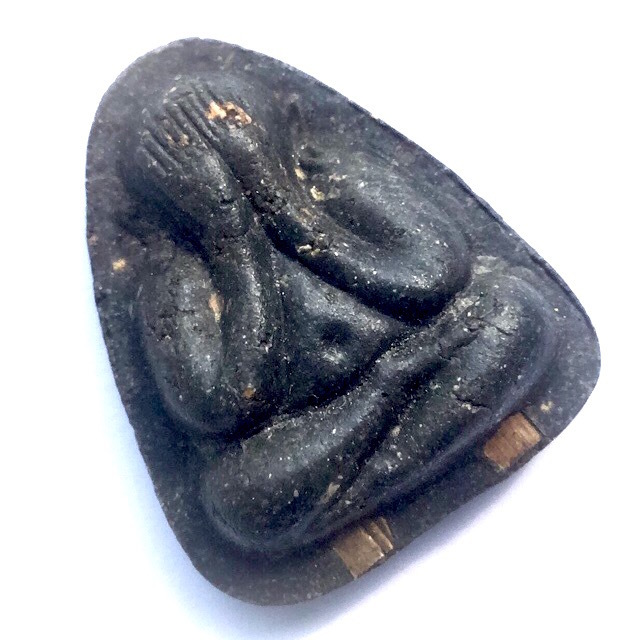 Below; Muan Sarn Sacred Powders of the amulet show a slight white mildew rising to the surface, which is due to the precense of Kakyayaks Earths. this is an essential aspect of investigating the Muan sarn of Luang Phu To Pra Pid Ta amulets. 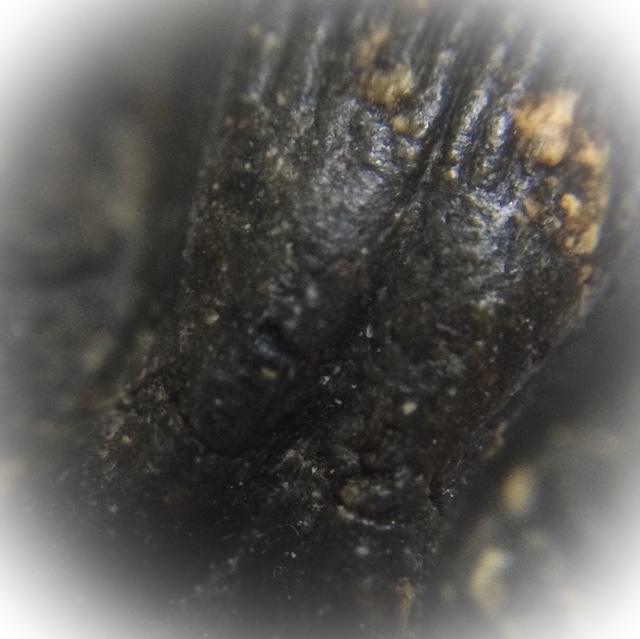 The amulets of Luang Phu To always have a certain quantity of the hair of Luang Phu To in their mixture and visible on the surface to greater or lesser extent. In Black Bailan versions, the hair is much less visible than in the lighter colored powder versions.

Two Gold Takrut spells are inserted into the base of the amulet. A defined ridge is seen where the legs cross at the ankle lines. The Buddha Image is outstanding, with clearly defined lines, and the ear lobes blend with the shoulders in subtle fashion. The fingers are clearly defined and elongated. 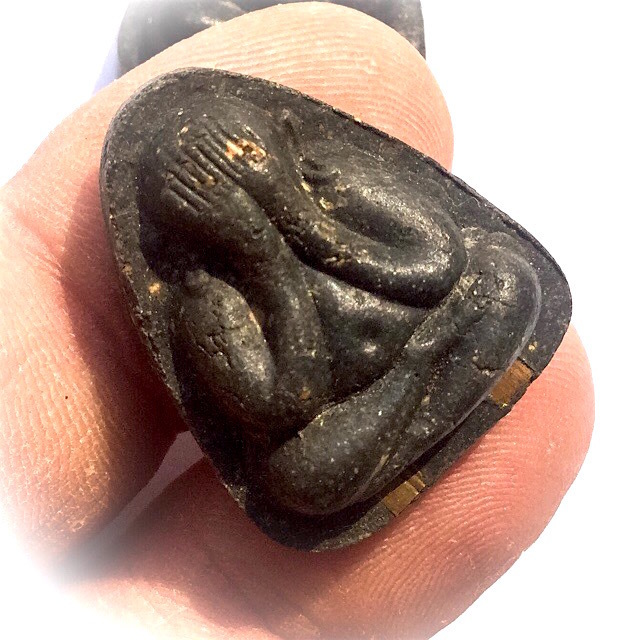 The surface of the Muan Sarn Sacred Powders has experienced slight cracks in it, increasing the beauty of the amulet, which is a classic effect of the changing humidities of the atmosphere, and this has given the amulet is distinguished look of authenticity. 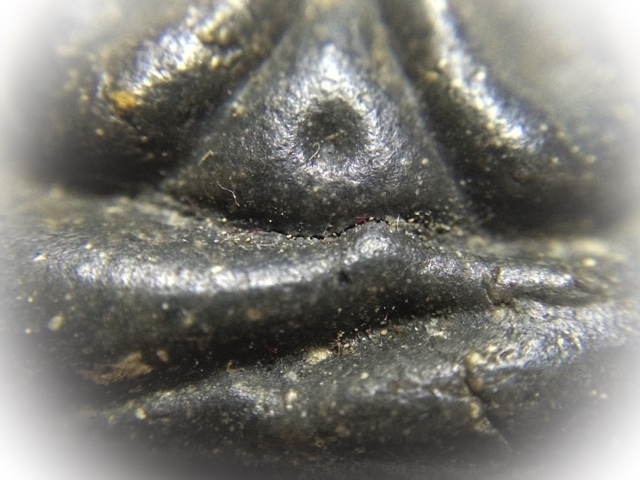 For those who see the inimitable top class Master Piece this is amulet is the right choice for those whose budget permits it. This amulet can be found worn in Thailand by high ranking police, army, civil servants and politicians, who jealously guard them for their Sacred Power. 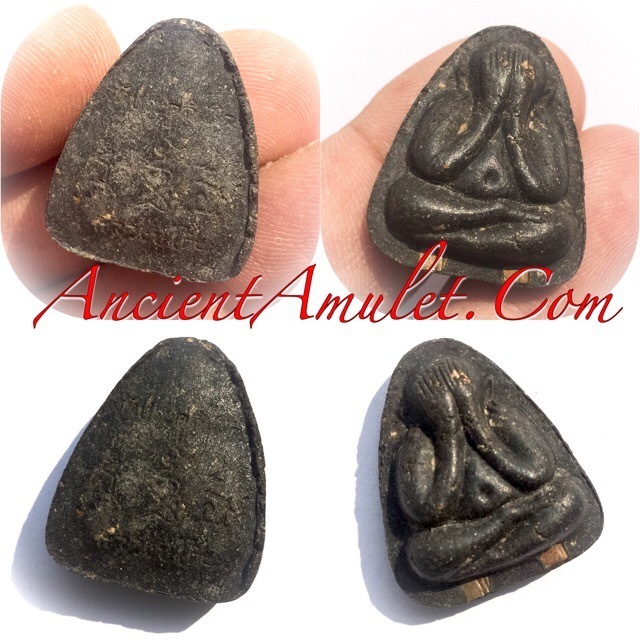