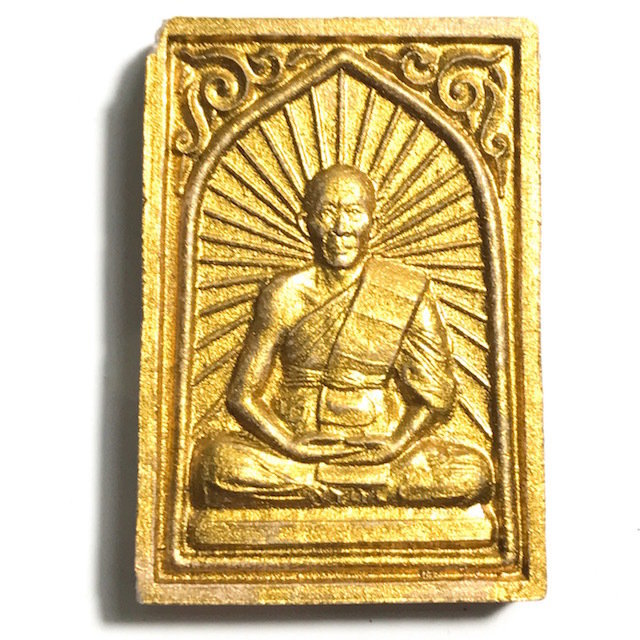 The Pra Pong Prai Kumarn Luang Por Sakorn Pim Siarn Lek (small head model) is since its release, and now more than ever a classic Pim Niyom model amulet of Luang Por Sakorn's Great pantheon of amulets. The Pra Roop Muean Siarn Lek an immense rarity in the present day to see, and ever more so since the passing of this great Master and 'Looksit Aek' first initiate of Luang Phu Tim Issarigo (Wat Laharn Rai). This Pim is the Pim Siarn Lek with Silver Takrut, made in Nuea Chompoo Pink Powders with Pong Prai Kumarn (visible in certain greenish-white marbled areas of the Muan Sarn Clay of the rear face). 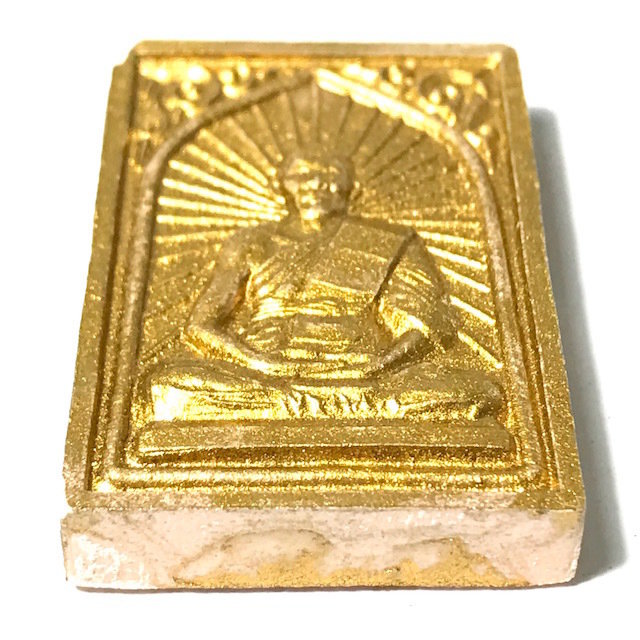 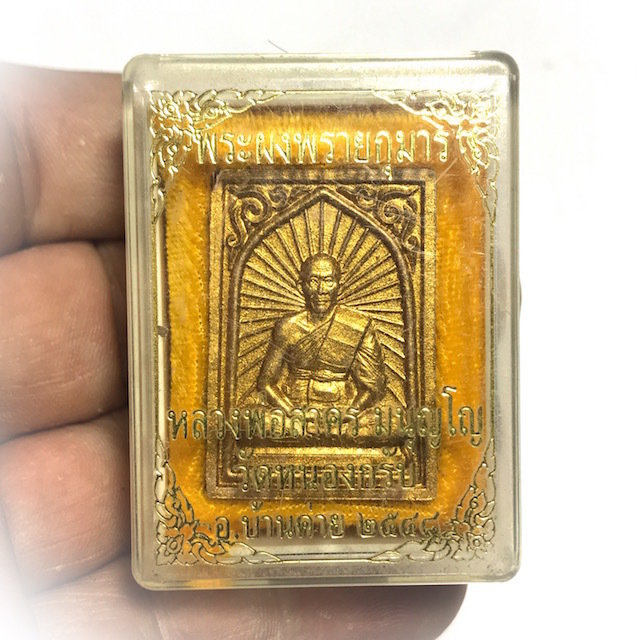 Below; Pim Siarn Dto with silver/copper Takrut (1080 of each Pim made)

Below; Pim Siarn Dto with silver Takrut and Ploi Sek Gemstone fragments (899 amulets made in this Pim) 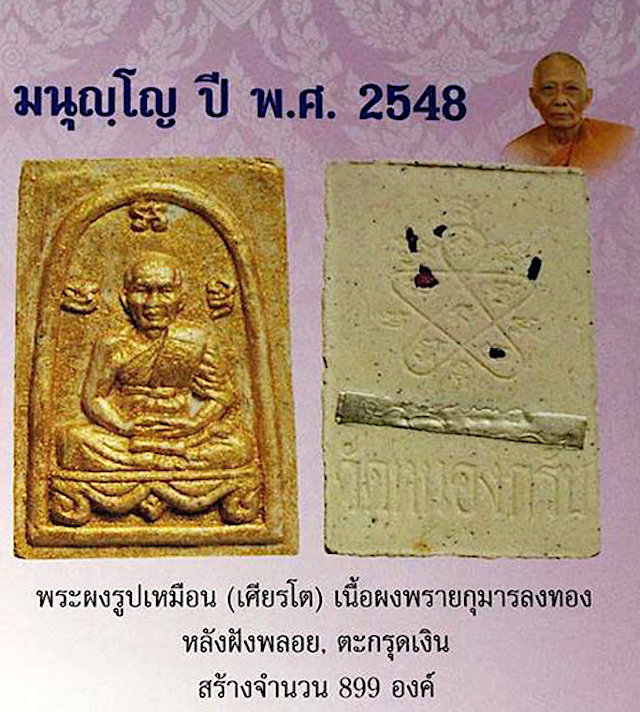 A batch of standard versions in both Pim were made with gilded front faces and no Takrut were also made with numbers of all different versions in the edition amounting to 16,999 amulets in the complete series. The amulets were made using a formula which began with 9 different kinds of Muan Sarn Powders to make the Sacred Clay. 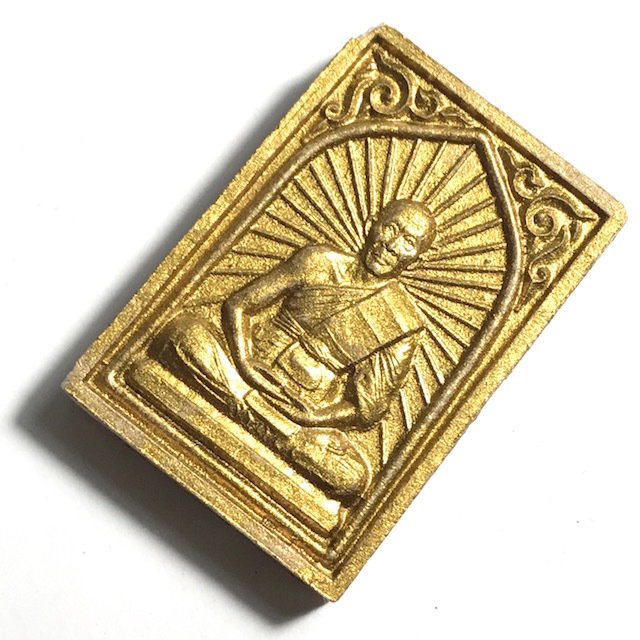 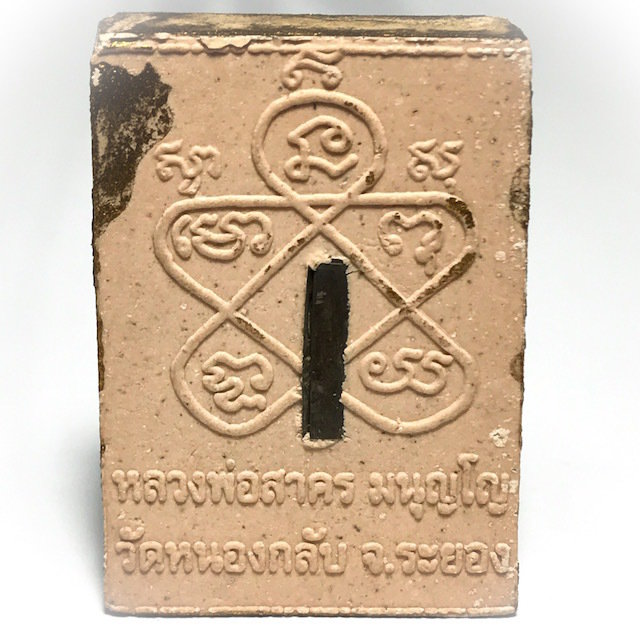 The powders were empowered by Luang Por Sakorn in solitary for 15 days and 15 nights before they were ready for being mixed into sacred clay and pressed into amulets, to be blessed in Buddha Abhiseka and handed out during the Tord Pa Pha Robe Giving Ceremony on the 27th February 2548 BE 10. Pong Prai Kumarn Luang Por Sakorn. 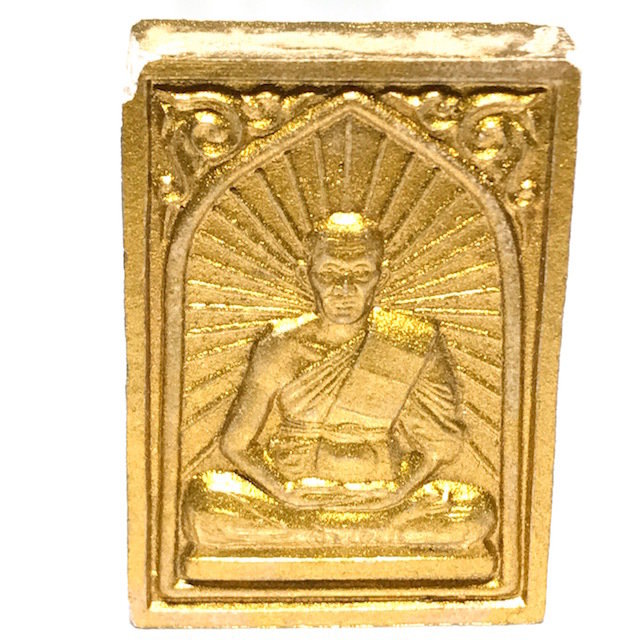 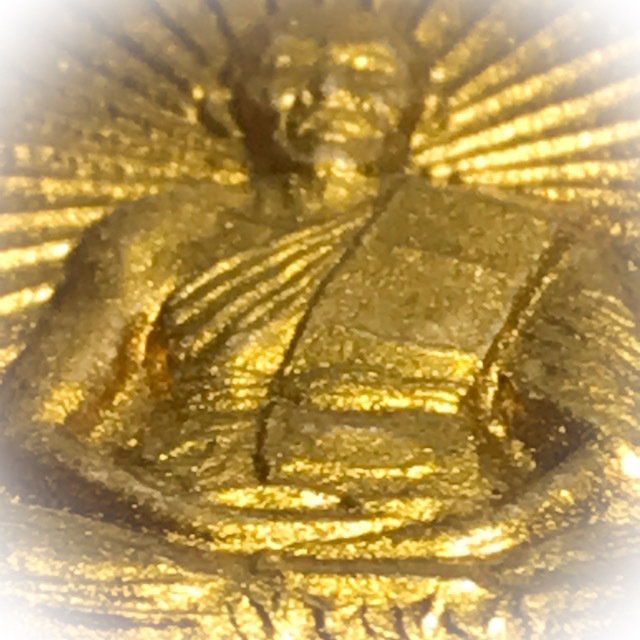 The making of Pong Prai Kumarn Powders according to the formula of Luang Phu Tim involved a very difficult and extensive set or ritual circumstances. The real name of thw powders is 'Pong Prai Kumarn Maha Phuudt'. These powders required an extremely complex method, which needed the correct choosing of astrological dates and times for the necessary events. The formula used the bone powders of a skull of a child who was not a 'Phii' (ghost), rather a 'Phuudt' (Bhūta Phantom). 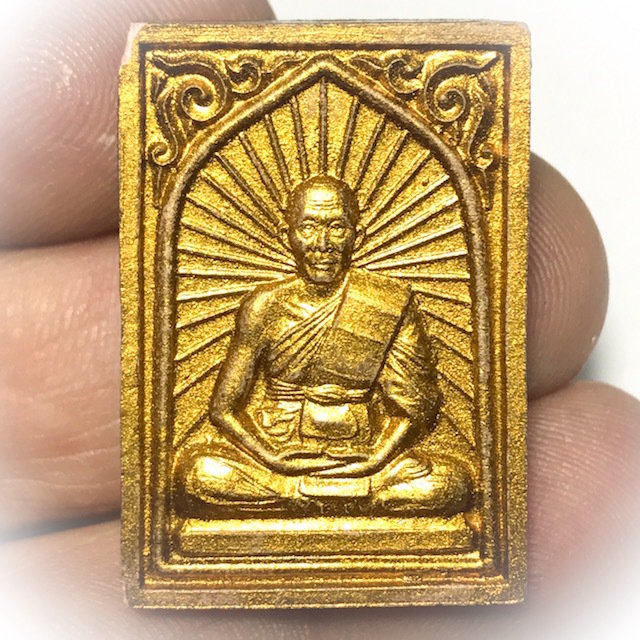 A Phuudt is the spirit of a human who was prematurely killed or died before his time. The Phuudt spirit can only be invoked and ordained by a Monk or Practitioner who has attained higher levels of Enlightened Awareness. The Most then ordain the spirit to become a Deva (Angelic Being). Only then, when the spirit of the bones had been ordained as a Deva, were the bones ground up and empowered as Pong Prai Kumarn Maha Phuudt. 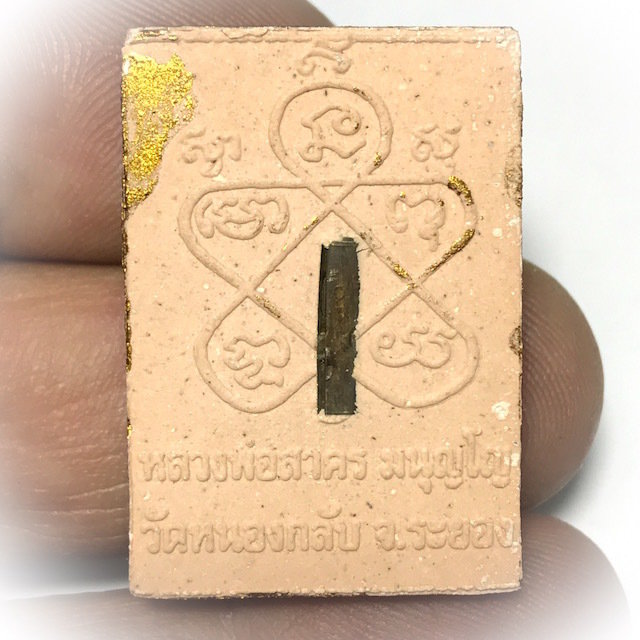 Luang Por's amulets are favored and faithfully revered with hundreds of thousands of devotees around the world who believe in this Great Monk and his amulets. Luang Por Sakorn Passed away in 2013, and since his passing, his in any case Internationally popular amulets have become ever rare to find, as the devotees deplete the remaining stocks of amulets left around the country. 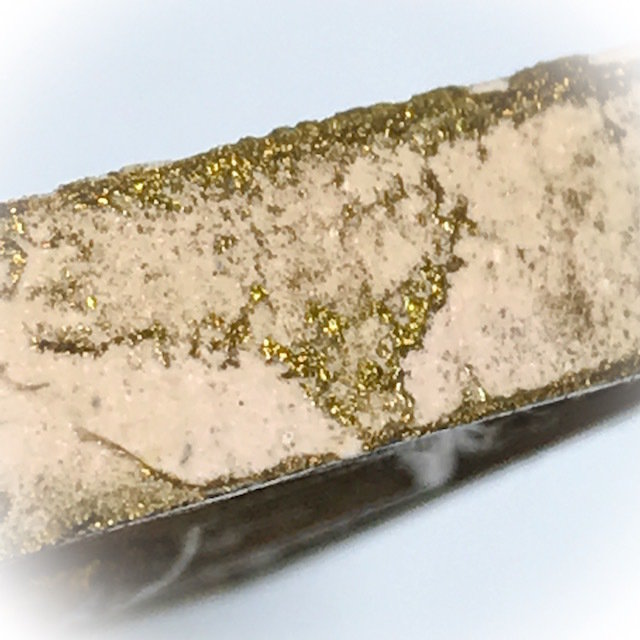 The value of Luang Por Sakorn's amulets have begun to approach that of some of the lower-mid range priced amulets of his Mentor, Luang Phu Tim, and are expected to continue to increase in both value and rarity continuously at the same very fast pace they have taken in recent years. 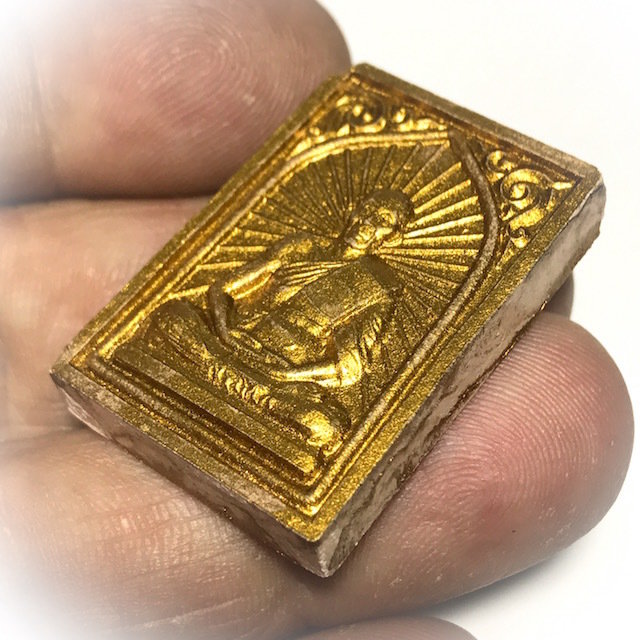 We recommend the amulets of Luang Por Sakorn for their intrinsic value rarity and certain power, being one of the top ten Gaeji Ajarn Guru master Monks of this last half Century to have brought us the cotinued lineage sorcery of his mentor the great Luang Phu Tim, and continue and advance the Dtamra Khun Phaen Pong Prai Kumarn of Luang Phu Tim, to the point where now since more than a decade, the amulets of Luang Por Sakorn have taken on their own individual niche of high esteem. 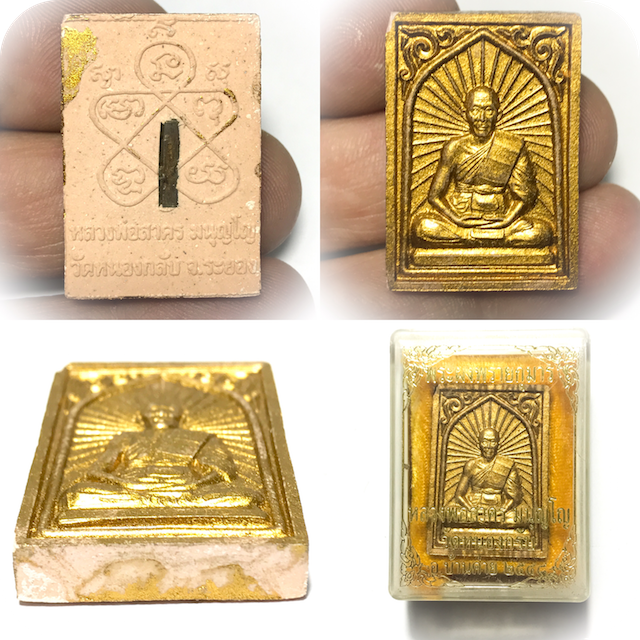