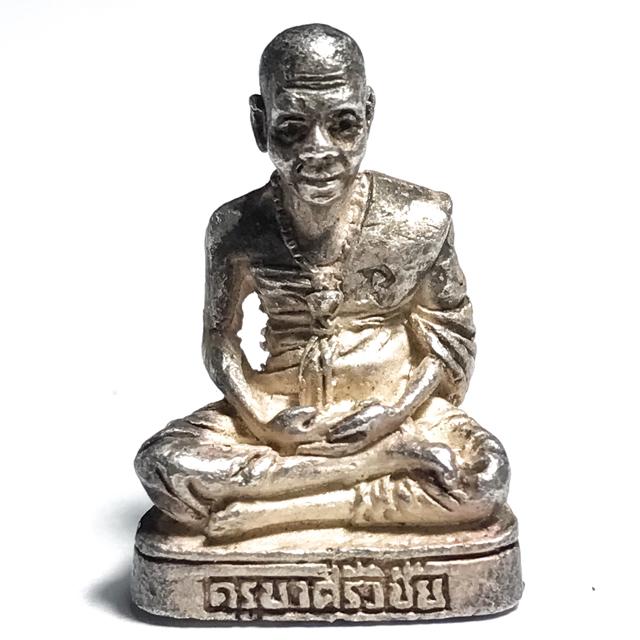 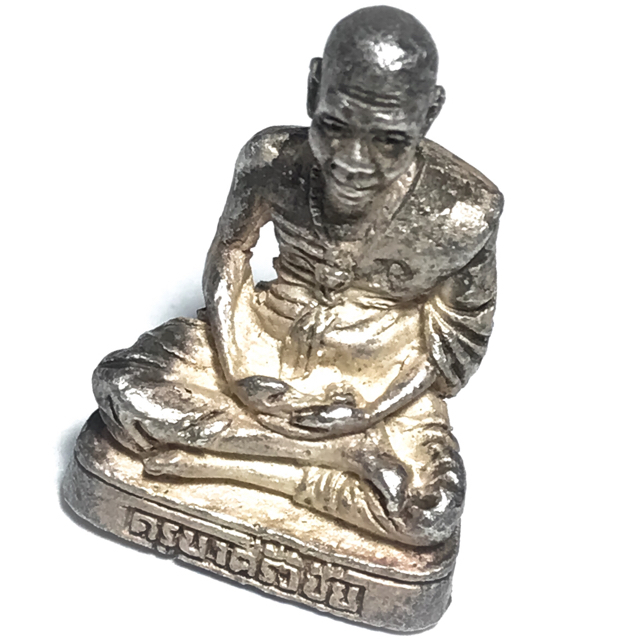 The statuette is forged from solid silver, in the image of Luang Por Kroo ba Srivichai? who lived from 2421 to 2481 BE, the Great Lanna Master who endured and passed some of the greatest tests of endurance a practirioner could have, and whose merits have reached far and wide around the world, to his many devotees. He is the greatest source of spiritual inspiration and comfort for the Thai Lanna Folk of the Northern region, and considered an Arahant by most Thai Buddhists.

This amulet is filed in the official documentation catalog of preferred Pra Niyom amulets of the Kroo Ba Srivichai and the Lanna Masters categories, as a classic and highly regarded and sacred amulet. An excellent Buddhanussati amulet for practitioners of the Buddhist path, meditation, and devotees of the Great Monk Kroo Ba Srivichai. 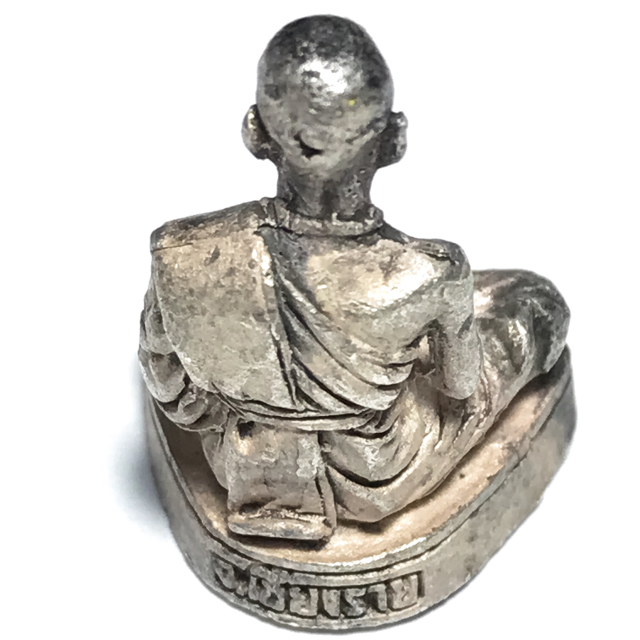 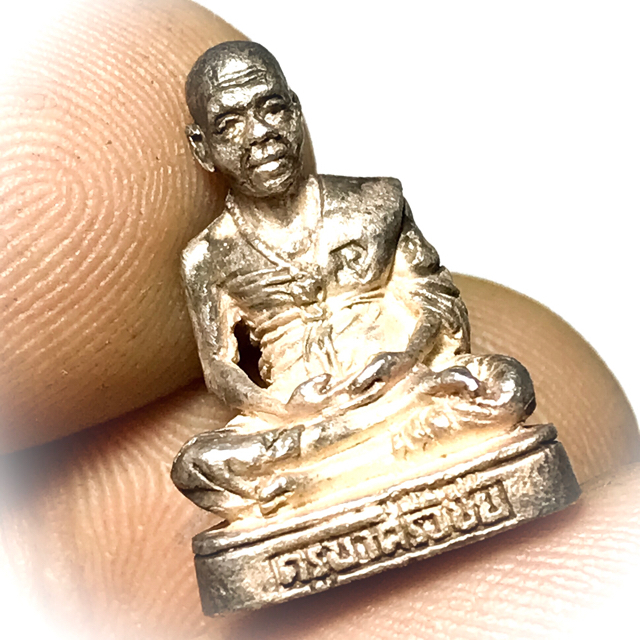 It was in the midst of a violent thunderstorm, that a farmer's wife in a poverty-stricken village in District of Lee, Lamphun Province (pronounced Lumpoon)gave birth to a son. The year was 1878, and moments after his coming into the world, the skies cleared. The wind gave way to a gentle breeze, and the torrential rain ceased. 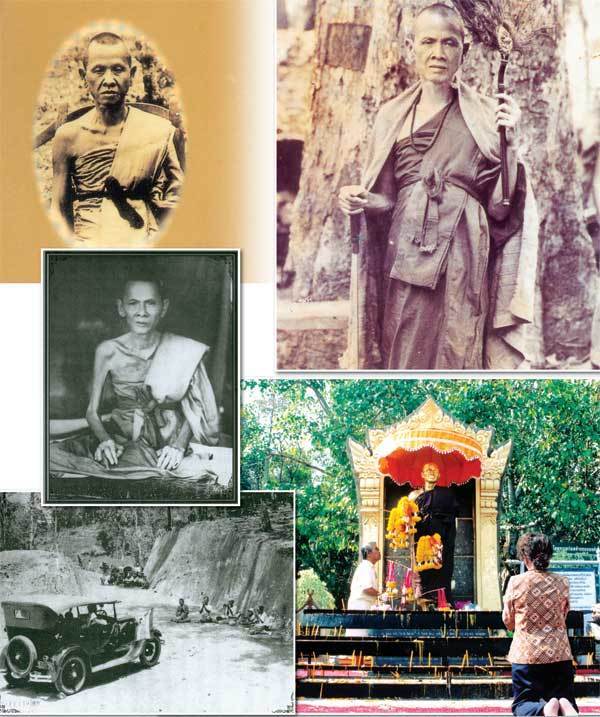 The baby was named Inta Fern, (good sign, or omen) or Fah Rohng (violent thunderstorm). As he grew up, his father gave Fern responsibility for the care of the family's livestock. While still but a child, he would take the buffaloes out to pasture while his parents toiled in the rice paddies.

Fuen tended to the beasts' every need from dawn until dusk each day; showing them kindness and understanding. Shortly after his tenth birthday, he and his animals were caught up in a thunderstorm, and Fern took shelter beneath a nearby palm tree. As the rain eased off, and the storm moved away, the boy saw a monk approaching. Running to greet the pilgrim with a most respectful wai, Fuen declared that one day he too would join the priesthood. 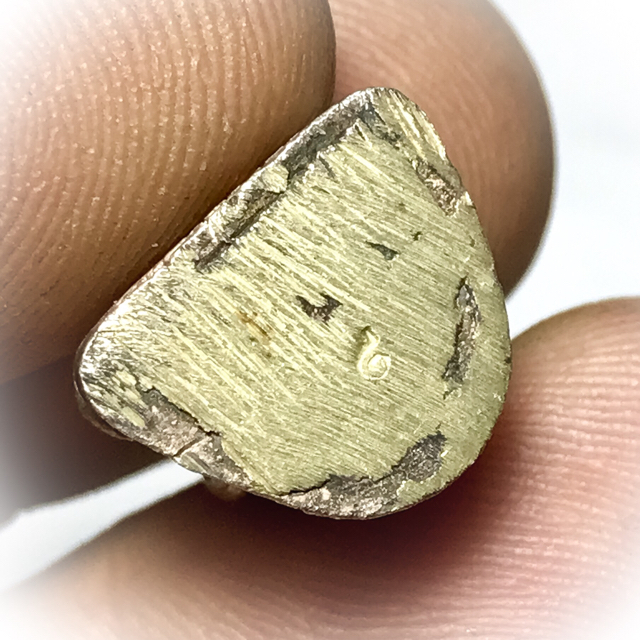 Above; Code stamp "U" is embossed onto the base of the statuette

The monk, sensing that there was something special about this boy, approached Fern's parents, and asked them to allow their son to be ordained. The couple explained that life would be so much harder for the family if the boy left home. The monk then went on his way, leaving behind a bitterly disappointed Fern.

The boy, however, remained persistent; constantly reminding his parents of his burning desire to be ordained. Finally, on his 18th birthday, and despite their poverty, Fern's parents allowed their son to be ordained as a novice. The teenager began his studies under the tutelage of Kruba Kattiya; the same venerable monk who, many years earlier, had met Fern during a thunderstorm, and recognized his special qualities. 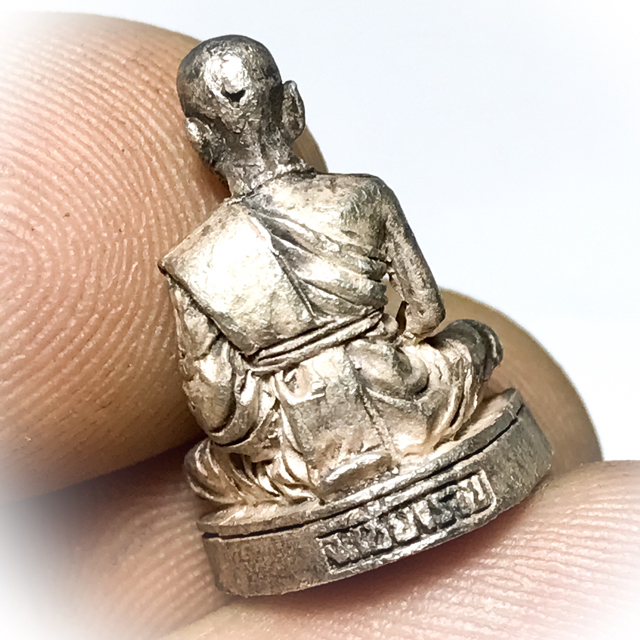 Fern, was ordained, and renamed as Samanera or Samanen (novice) Sriwichai. The novice surprised even his teachers with his enthusiasm for knowledge, and his impeccable behavior. Within two years, he was ordained as a monk with the name of Siri Wichayo Bhikhu and became known to all as Pra Sriwichai.

During the following four years, the young monk earned, through his devotion to the care of all who came in contact with him, the title - Kruba - (someone who is generous, compassionate, and thoughtful to the needs of others). Kroo Ba Sri Vichai rose to become abbot of his local wat, and set about designing and building a new temple for the district; the old one having fallen into disrepair. 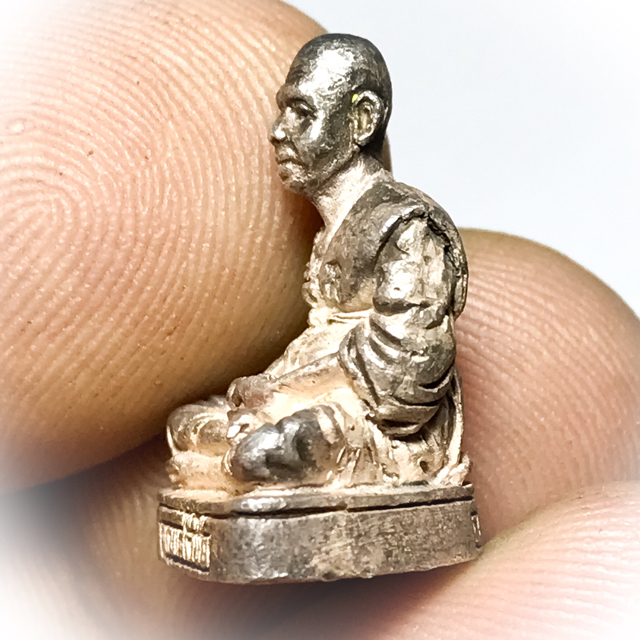 Kroo Ba Sri Vichai wandered the length and breadth of his district, helping the poor and the sick. Being simple, rural people, however, they revered their young abbot to a degree that led to jealousy and malice among local officials, and within the priesthood itself.

False accusations abounded, and on at least two occasions, he was jailed for alleged offences against the community. The accusations ranged from ordaining novices without his superior's permission, to inciting rebellion among the people of the region. 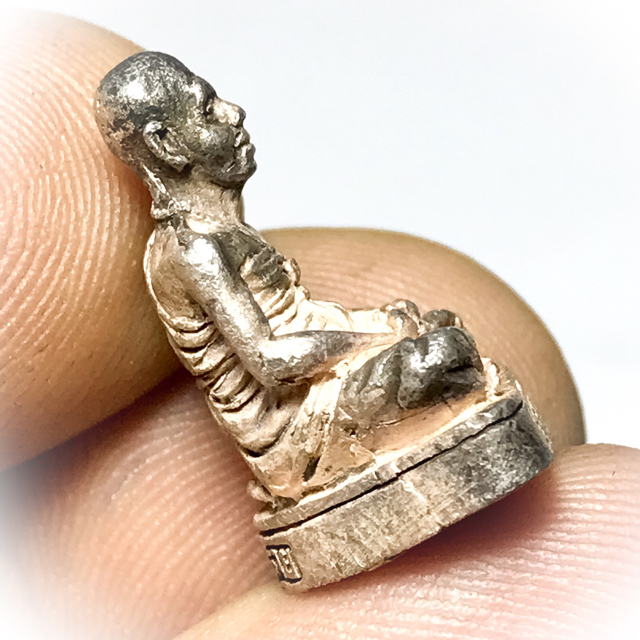 This persecution of Kruba included reducing him from abbot to ordinary monk, and an order was issued that he should be banned from Lamphun, and given no shelter or sustenance by the monks of any wat in the province.

Kruba refused the order to leave, and remained among his disciples. He was then commanded to appear before the Prince of Lamphun to answer the allegations. But, as he made his way to Lamphun City, his small group grew to several thousand strong as it was joined by fellow monks and villagers from throughout the province. 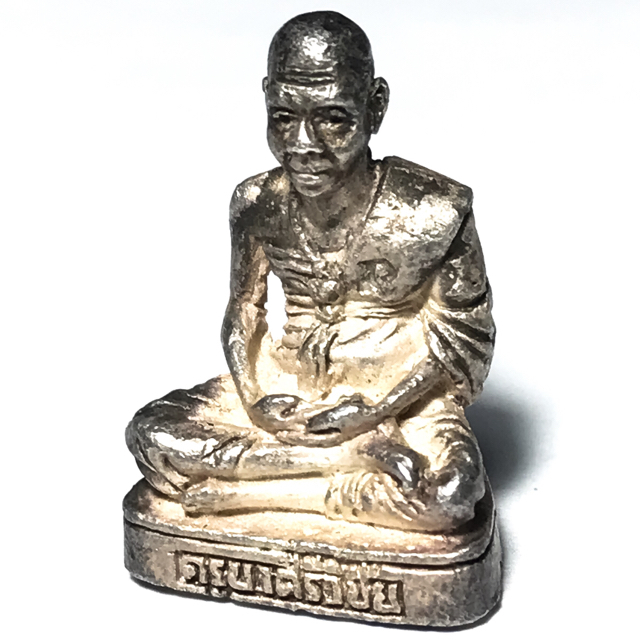 Fearing the local police would be unable to control such a crowd of, albeit peaceful protestors, the monk's case was referred to the Prince ruler of neighboring Chiang Mai, for judgement. It was agreed that Kruba should proceed to Chiang Mai, but with just four of his many disciples to accompany him. On arrival, however, his followers were prevented from accompanying him, and he alone was detained in Wat Sri Don Chai, where he remained for many months.

Below; Sacred Na Code stamp is embossed onto the sangkati robe sash of the statuette 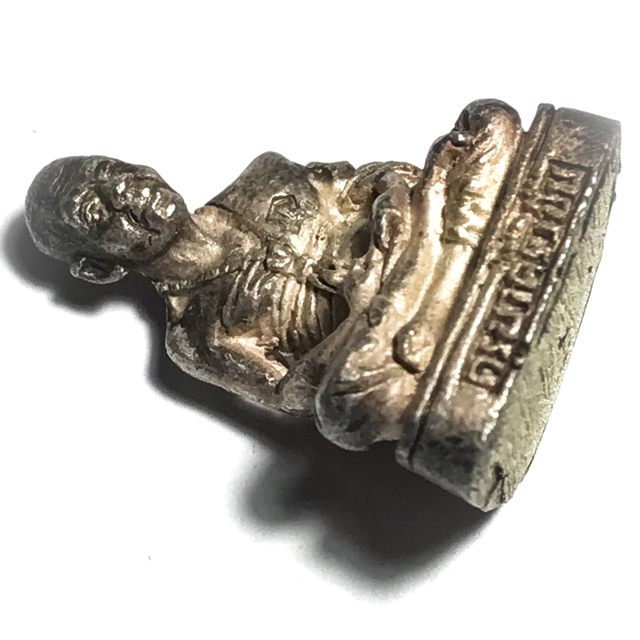 The people of Chiang Mai flocked to the temple with offerings of food and refreshment for the disgraced monk. The case was proving too controversial for any Chiang Mai officials to handle, and with public sympathy growing for Kruba, his case was referred to Bangkok.

The public persecution of the man had become a matter of national importance. Head of the Buddhist monastic order, the Prince Supreme Patriarch, Somdej Pra Maha Samana Jao, would make the final judgement.

In the summer of 1920, Kruba was found not guilty, and at the age of 42, still clear of eye and mind but physically frail, he left Bangkok by train for his homeland in the North. When his train pulled into Lamphun station, Kroo Ba Sri Vichai was met by a large crowd of people from across the social spectrum. It appeared that the rich and powerful had joined the poor in their adulation of the monk. 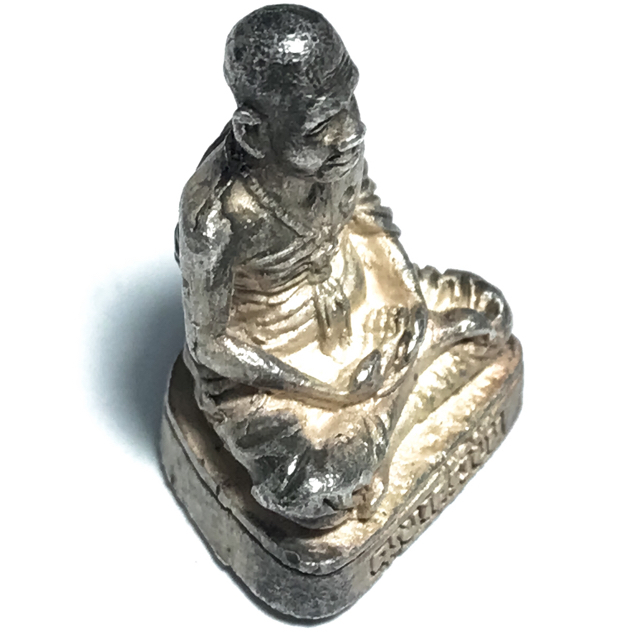 Throughout the years of his public abuse by officials, Kruba never once lost his serenity; remaining calm and dignified. Admiring these qualities, and recalling the monk's talent for restoration, the Prince of Lamphun province invited Kruba to take up residence in Wat Jamathaewee, an ancient temple that had fallen into disrepair. Accepting the invitation, the monk set about restoring the wat to its former glory, and began a program of reconstruction throughout Northern Siam that would earn him the title of "the developer monk." Within 19 years, Kruba renovated and built 105 old and new temples altogether in the provinces of Lamphun, Chiang Mai, Chiang Rai, Payao, Lampang, Sukhothai, and Taak. 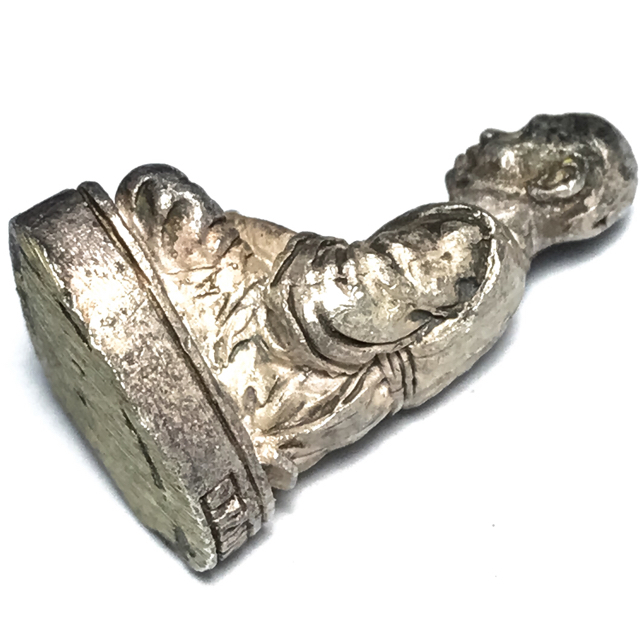 Five years after the completion of the Doi Suthep road, Kruba fell ill, and was taken back to the village of his birth, Ban Paang, in Lumphun province, where he died in his 61st year. His funeral was attended by thousands; royalty to rural workers came from across the nation to pay homage to a simple farmer's son who grew to become the Buddhist saint of northern Thailand. Kroo Ba Sri Vichai's monument lies at the foot of Doi Suthep beside the road he created, allowing millions of pilgrims and tourists access to Wat Pra Thart Doi Suthep.

Use the Buddhist Method of Bucha with Kata Aaaraatanaa Pra Krueang 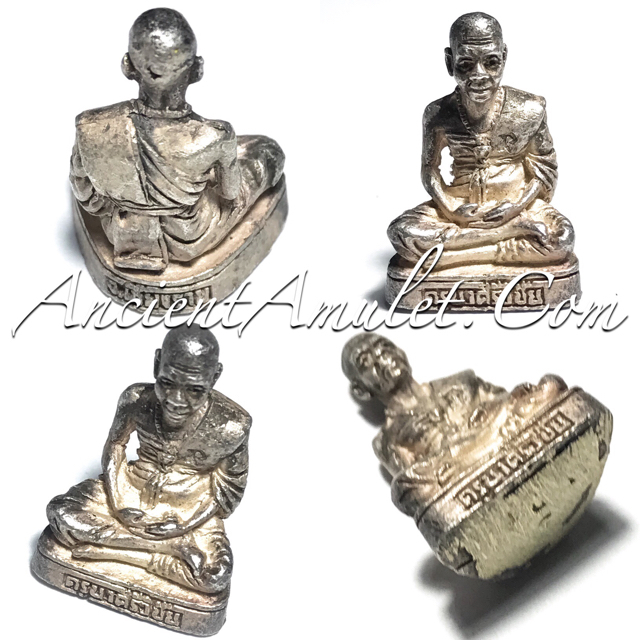