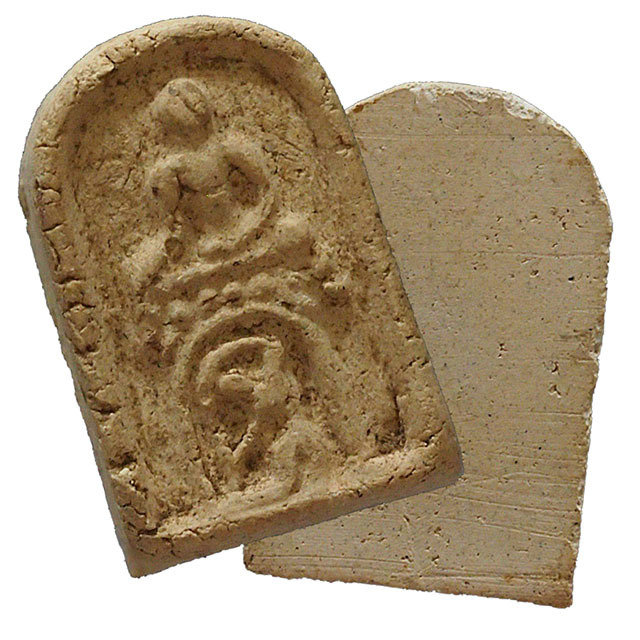 Released in the Year 2505 BE, the amulet is 'Nuea Jad, compact hardened dense Sacred Clay, with depth of relief and pristinely ingrained features, from a preferred block press. The front face of the amulet features the Buddha sitting with his right hand pointing to the ground, on a raised Dais, with the Dharani Earth Goddess 'Pra Mae Toranee' seated below the Throne, squeezing a Deluge out of her hair to wash away the Mara Demons 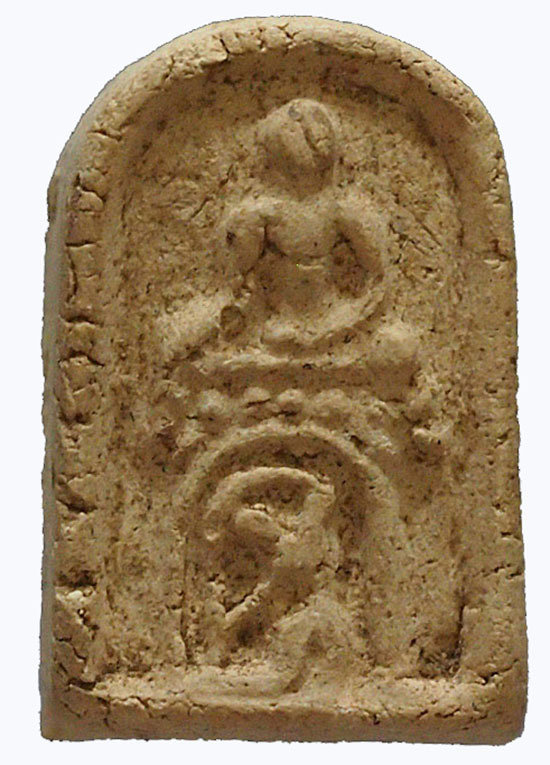 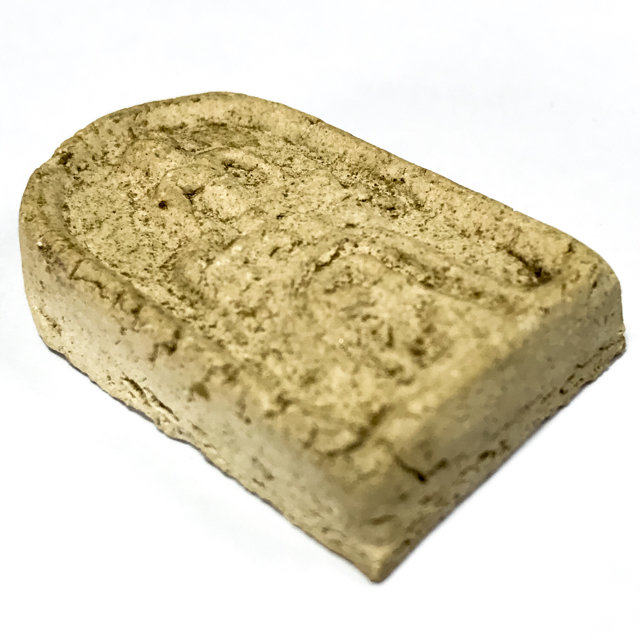 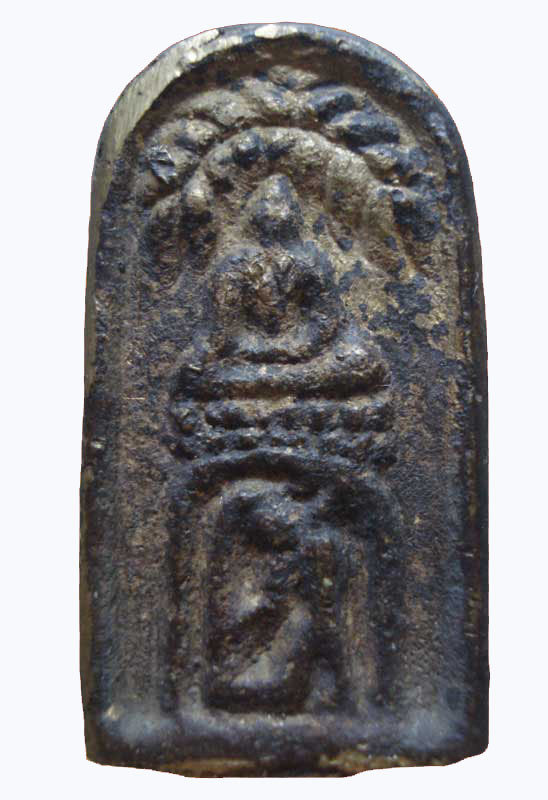 The rear face bore the image of the Pra Rahu Asura Deva Eclipse God, which was the most famous Wicha of Luang Por Noi 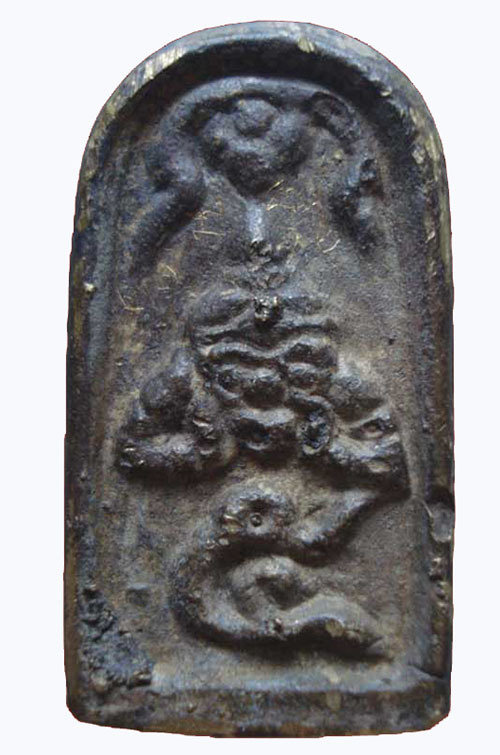 The rear face of the amulet is smooth and reveals the Muan Sarn Sacred contents of the clay, to be rich in Sacred Muan Sarn, which hints at a similar admixture to that used in Pra Somdej Wat Rakang Kositaram of the Dtamra Somdej Pra Puttajarn (Dto) Prohmrangsri. The presence of Pong Puttakun and Pong Ittijae are highly visible in the admixture 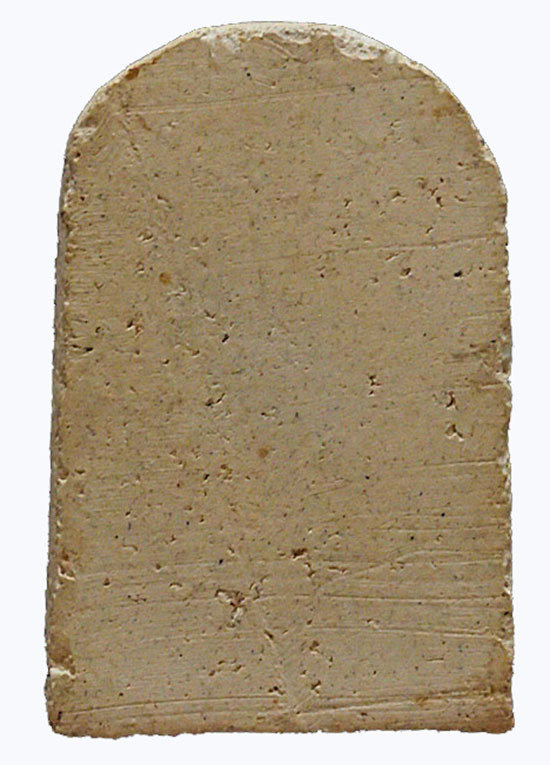 The amulet is a pristine exhibit for study of Muan Sarn Sacred Powders and of the ageing characteristics of Muan Sarn for an amulet of this Era, and provides a wealth of study information for the observant student to examine and gather experience under the eye loupe. 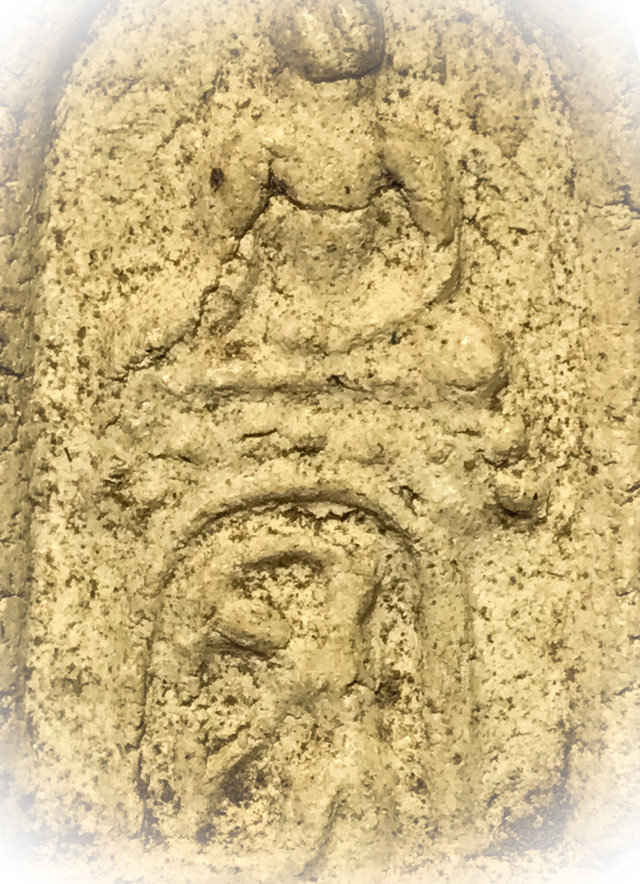 Luang Por Noi, of Wat Sri Sa Tong was a Thai-Lao Sorceror Monk of Grand Repute, and the Kroo Ba Ajarn of many subsequent Lineage Masters. He was most famous for his Wicha Pra Rahu Kala Ta Diaw one eyed coconut Eclipse God amulets, and his Classic Buddhist amulets. The Pra Rahu Kala Ta Diaw of Luang Phu Noi, are the most prestigious of all in the eyes of the Pra Niyom Collector Community. 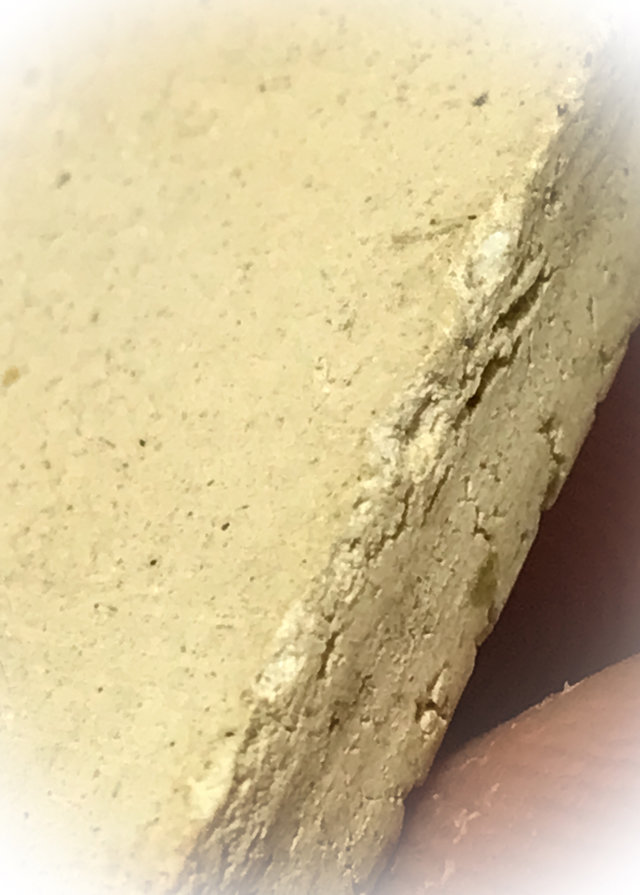 The amulets of Luang Por Noi themselves were usually designed by Artisans who were devoted Looksit of Luang Por Noi, who were mostly immigrants from Vientiane, in Laos, who moved to Thailand during the early Ratanakosin Period of Thai History. His amulets are amongst the rarest to find of all the Nakorn Pathom Masters, along with those of Luang Phu Perm, Luang Phu Bun (Wat Klang Bang Gaew). His Pantheon belongs to the Master Class Category of the Tamniab Wadthumongkol Pra Niyom, and are considered immensely powerful, as well as being rare collector treasures of the Devotee.

The Pra Pong Pim Chana Marn is a highly recommendable alternative to the extremely expensive metal coin version of the same edition, the Rian Lor Pim Chana Marn Hlang Rahu, as an equally powerfully blessed amulet of Luang Por Noi, in Muan Sarn Sacred Powders of the finest admixtures, at a much more affordable price to the Rian Lor. 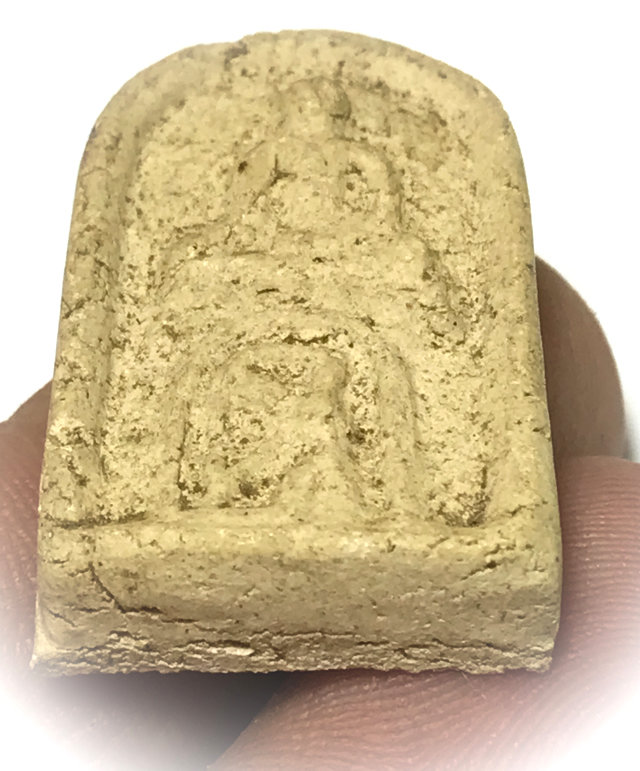 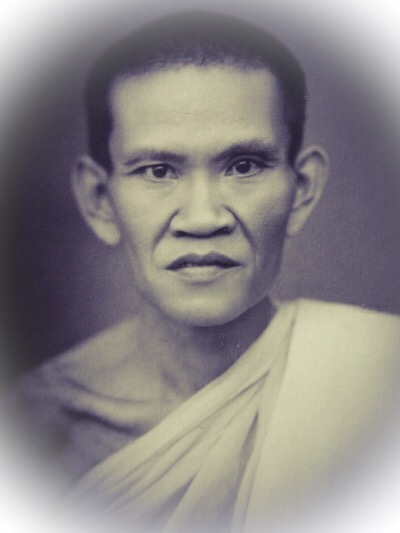 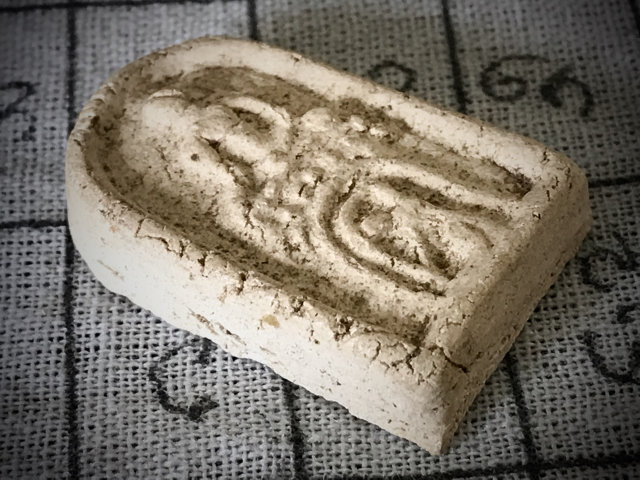 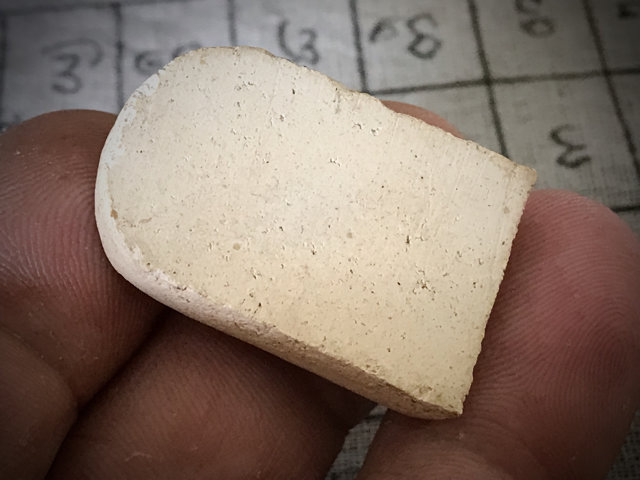 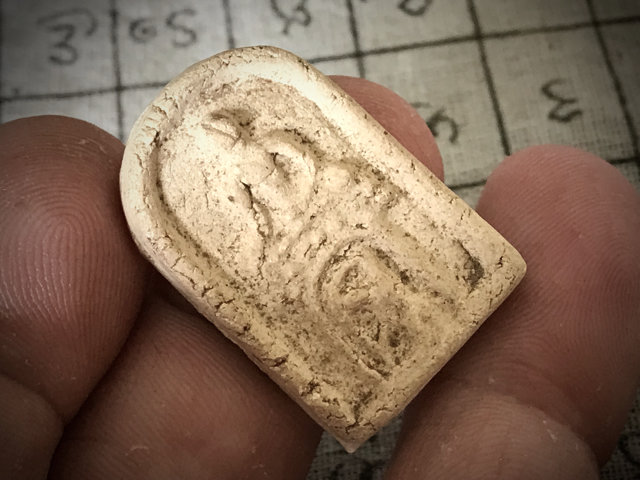 Luang Por would then would distribute them back to the devotees for protection and Serm Duang (improve fate and destiny).As the Lao artisans began to develop their skills and experience repeatedly carving the coconut shells, the design became ever more finely tuned and increasing in beauty, but due to the fact that there were a large number of artisans all making these carvings, the designs would be varied both in appearance of features, and in the quality and amount of detail. 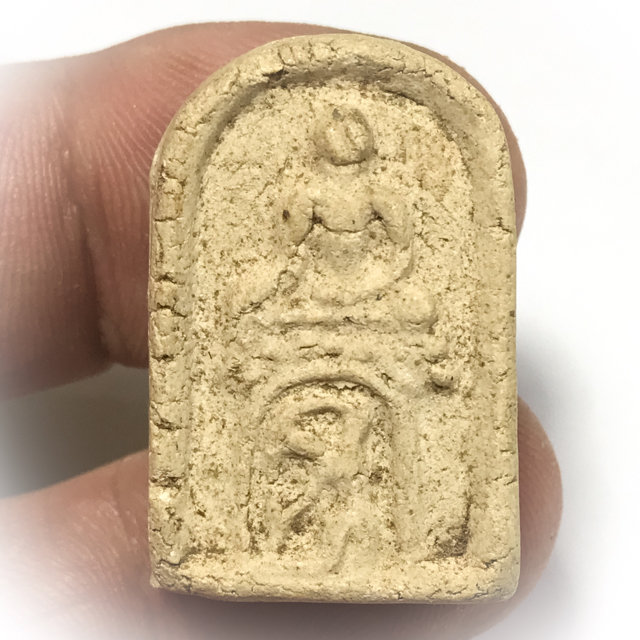 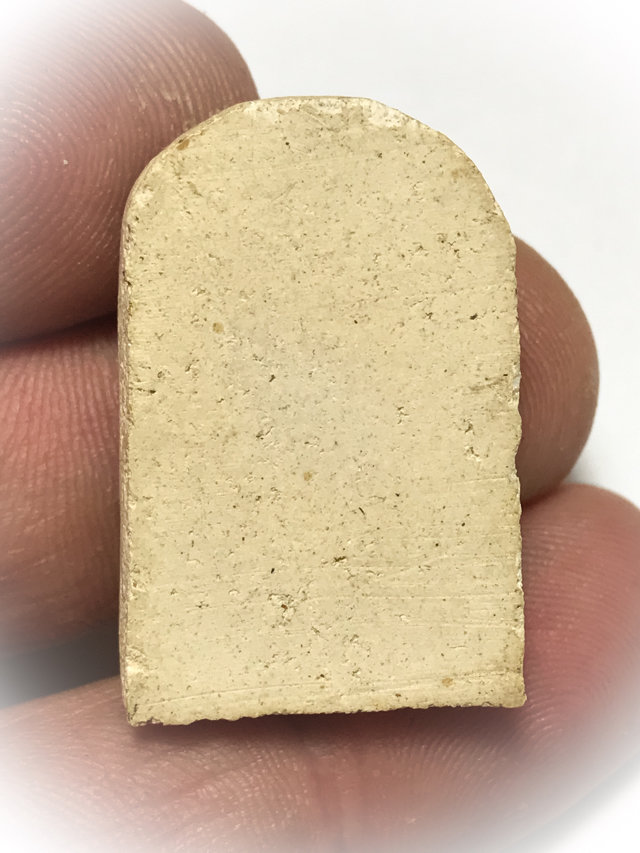 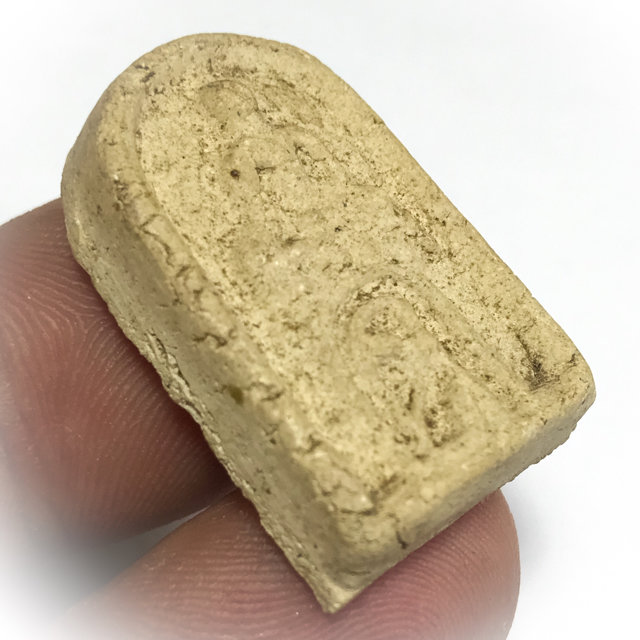 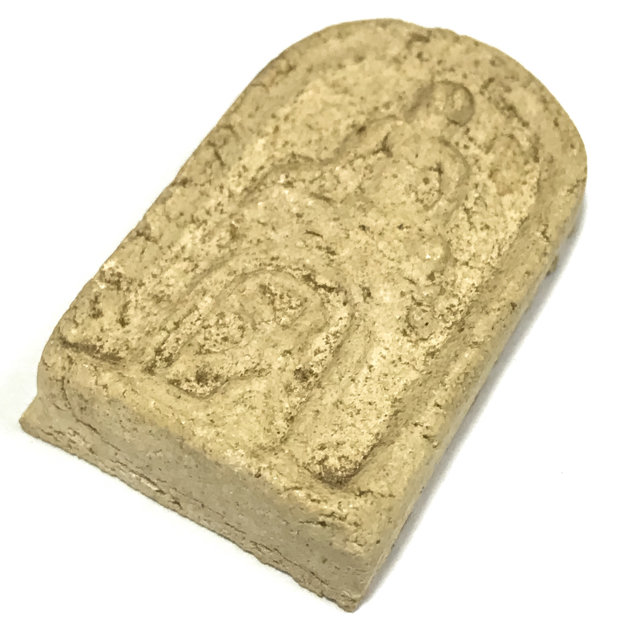 The development of the carved artisanry at the beginning in the times of Luang Por Dtrai and Luang Por Lee, and the early time of Luang Por Noi, first developed in multiple directions because some images would be square, triangular, or circular, and even in the shape of a lotus petal were seen in rare occasions.

This depended on each artisan and the piece of coconut shell he had to work with. The Lao artisans would then bring the finished work to Luang Por Noi for empowerment. It was here that Luang Por Noi began to apply the next development in the refinement of his most classic and highly recognisable Pra Rahu amulets, by enforcing his master-stroke. The master-stroke, was to teach the Artisans to use oil absorption to soften the coconut shells, and be able to flatten the piece being worked with.

They would then to cut a standard shape frame. The flatness achieved from the now malleable coconut shell, with the added softness achieved through the oil soaking, allowing the Artisan to engrave the details in a much more refined fashion with a higher level of detail. 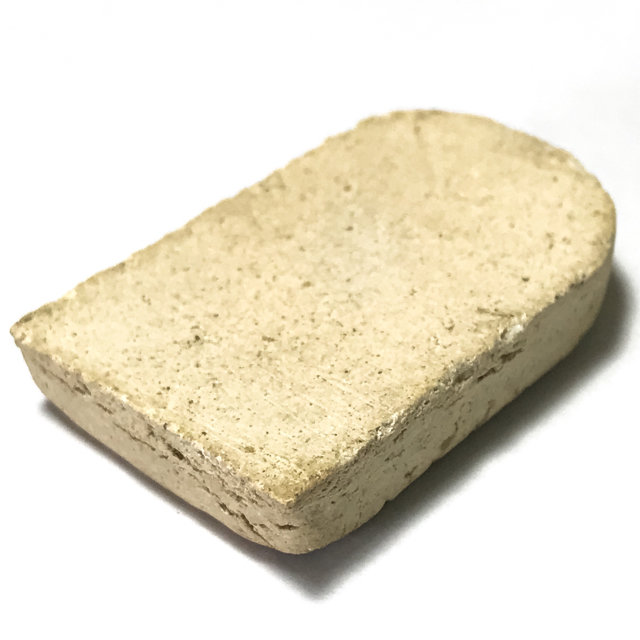 It was here that Luang Por Noi introduced a single universal design which has become the classic reference standard of Pra Rahu Amulets by Luang Por Noi; the 'Sema Kwam' shape. The word 'Sema', means the Lotus Petal.Teardrop shaped Temple Monastic Border Monument Image, and the word 'Kwam' means 'upside down'. This is hence similar in shape to the standard 'Pim Sema' shaped coin amulets seen in Thai Amulets, but is reversed to point downwards. 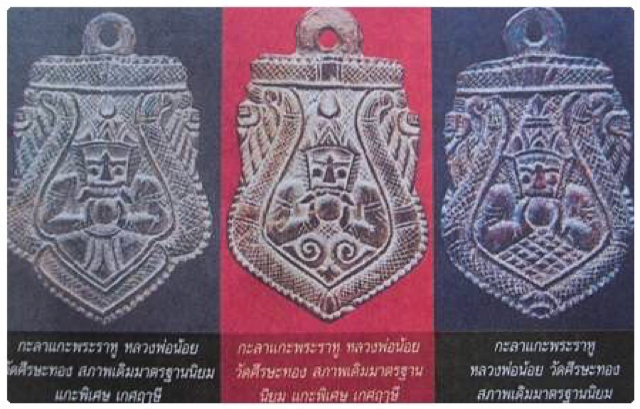 This then became the only model to be carved from then onwards, and despite many other shapes and sizes of authentic Pra Rahu Luang Por Noi amulets being made previously, the Sema Kwam model became the standard accepted model recognised for its inimitable appearance and ease of recognition. And so it came to be, that Luang Por Noi's most collected preferred Pra Rahu amulet is the Pra Rahu Kala Ta Diaw Pim Sema Kwam. 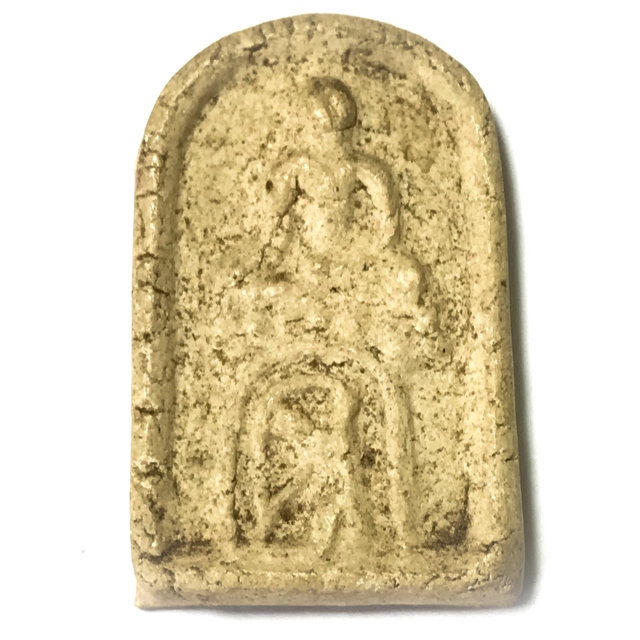 It was only rarely that Luang Por would be able to make and empower Pra Rahu Om Jantr Kala Ta Diaw amulets, because he would only empower them exclusively during the Lunar or Solar Eclipses, depending if the Rahu amulet in question would be empowered for the Yant Suriya Bprapa Solar Eclipse spell, or the Jantra Bprapa Lunar Eclipse spell. Some years there would be no release of Rahu kala Ta diaw if there were no eclipses occurring in the sky. 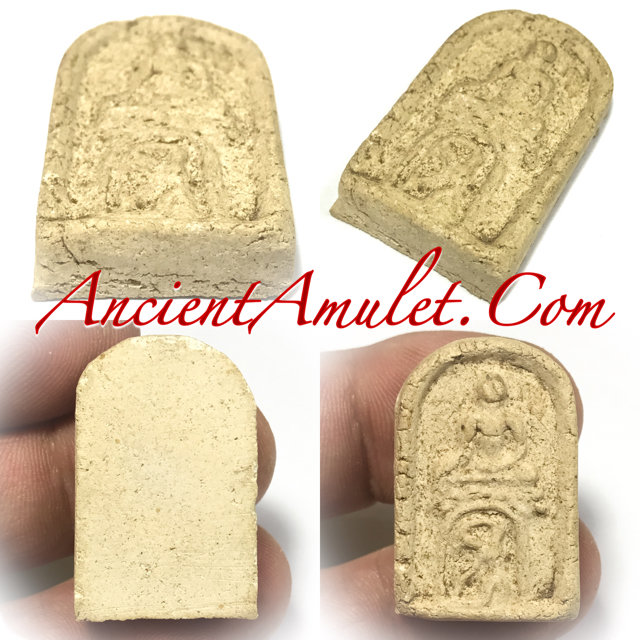