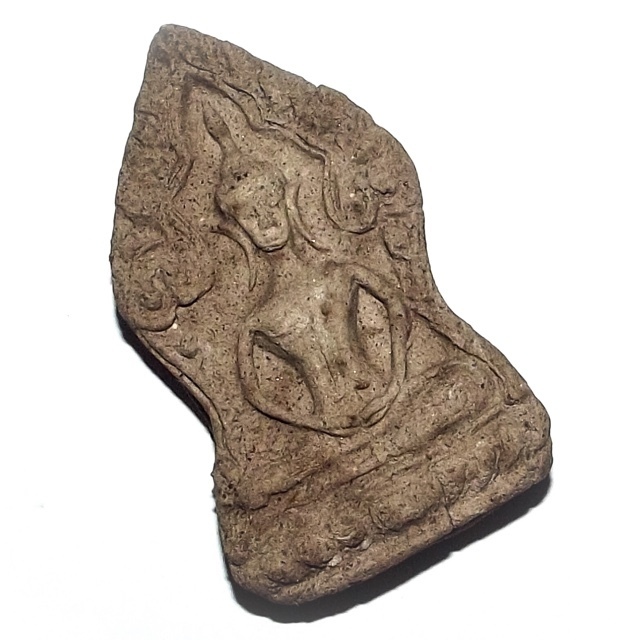 This amulet is somewhat of a Rarity and was made in small numbers pressed by hand at the temple, from the Great Pra Ajarn Nam, Olden Days Khao Or Master Monk of Wat Don Sala. Released Circa 2510 BE. Powerful Metta Maha Niyom, Maha Sanaeh, Klaew Klaad, Maha Pokasap and Kaa Khaay Magic is imbued. 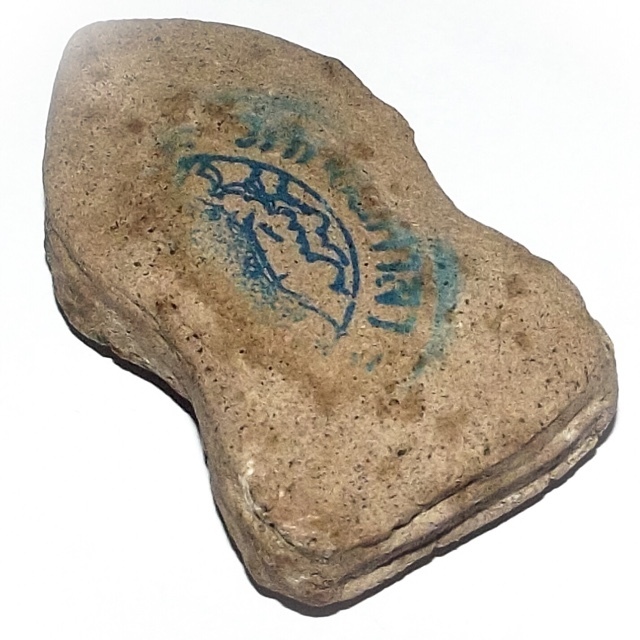 This edition was made in various different kinds of Muan Sarn Sacred Powders, including Black Mineral Powders, Nuea Wan Maha Sanaeh Herbal Powders, and Nuea Wan Maha Sanaeh with Gold Leaf. Some of the amulets were also smeared with a green herbal tincture by Por Tan Nam, which nobody really knows what it was, or why he did it. It is assumed of course though, that is was some kind of sacred tincture to charge the amulets with power. 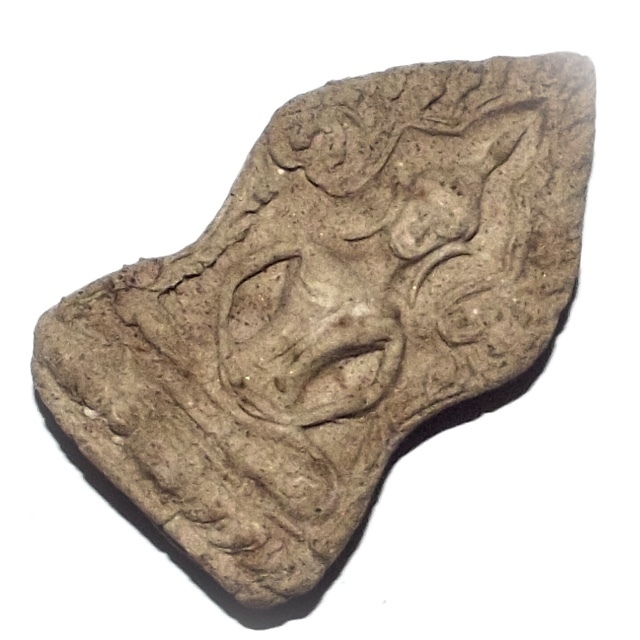 The amulet is a Pim Yai (large model, measuring 5 x 3 Cm, and has an elegant undulation to the outer border of the amulet. The rear face reveals the immensely high concentrate of sacred elements and crystalline substances, in the black sacred powder Muan Sarn mixture, which has a coars appearance from the hand mixing and pressing, which is something you do not find hardly at all in modern era amulets, where mass pressing is the norm. 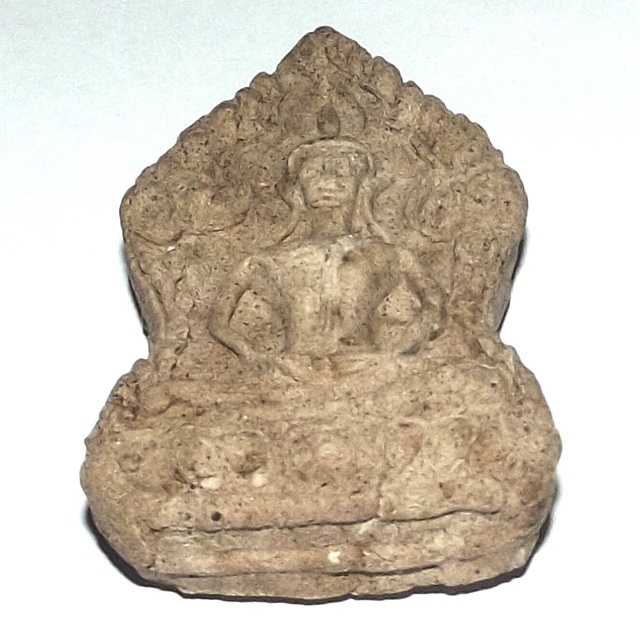 Olden days amulets did not have the same technology as the present day, which of course means that the olden days masters would mix and press the amulets by hand one by one, giving each amulet its own individual empowerment during the pressing. 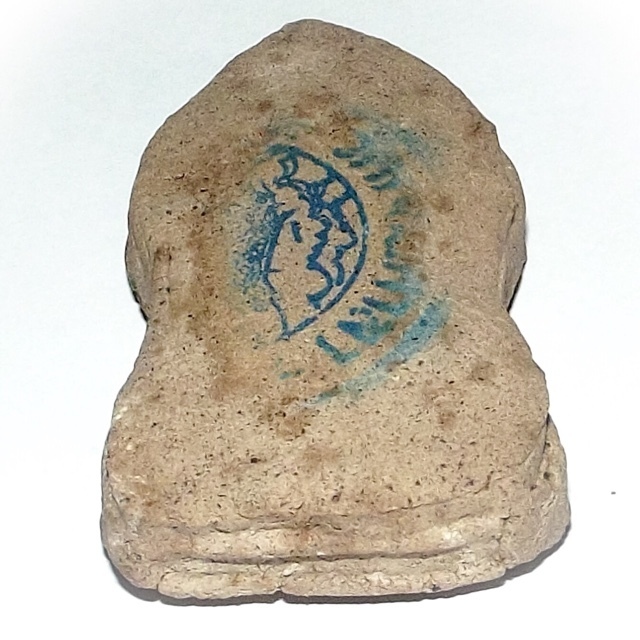 This of course makes the amulet so very much more special than most of the modern era, and of course are for this reason also of a much higher sacred value as far as the faith of the devotee in the amulet is concerned. 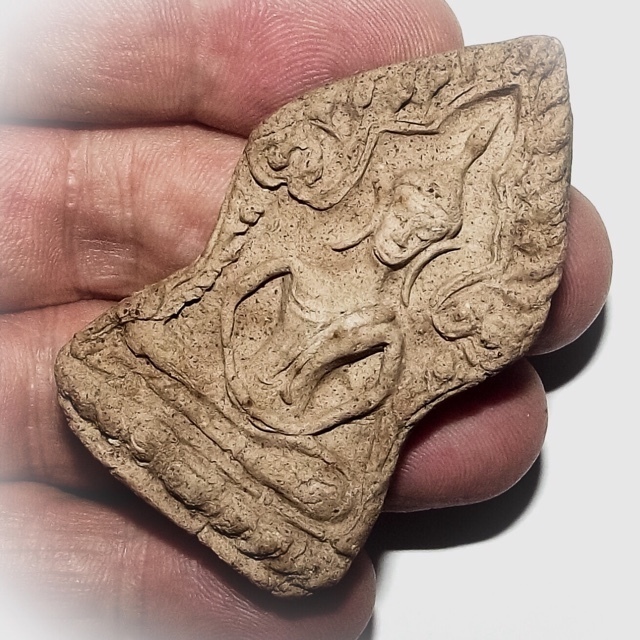 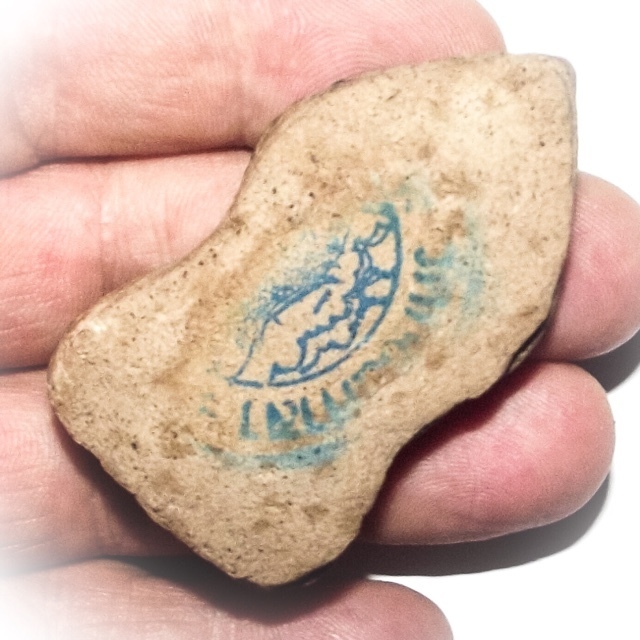 Por Tan Nam Ordained into the Sangha at the age of 20, but after some years disrobed to have a family, and lived as a Lay Master for many years. He learned Wicha with the Great bAjarn Tong Tao of the Dtamnak Dtak Sila Khao Or Southern Academy of Sorcery at Wat Khao Or,, from a very early age before even his first Ordination. When Ajarn Nam became older, in the year 2506, he became gavely ill, and was expected to die. 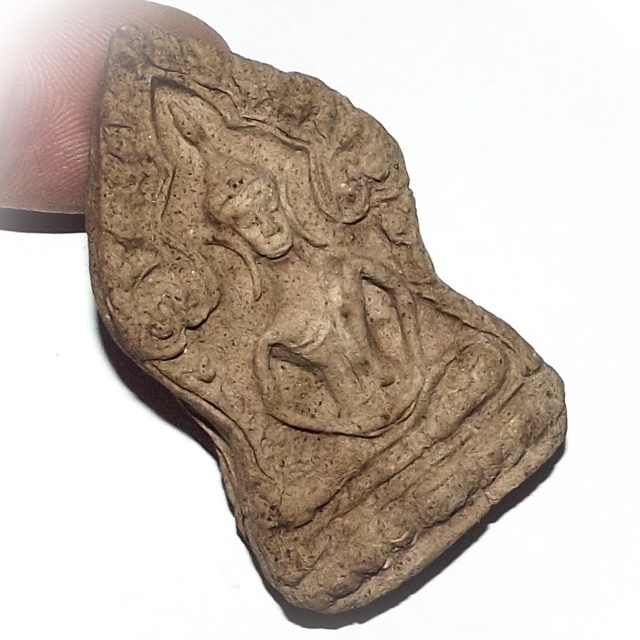 But one of the Looksit of the Wat Khao or Temple, whilst in trance during a ceremony, is said to have been possessed with the spirit of Ajarn Tong Tao, who communicated that if Por Tan Nam would recover from his illness, he would have to Ordain again. Por Tan Nam heard this news and promised to ordain if he recovered, which he did. He then ordained again in 2506, and became Abbot of Wat Don Sala, until the day of his passing in 2519 BE. His Majesty the King performed the lighting of the Funeral Pyre at the Cremation of Por Tan Nam, lending great Honor to this great Master. 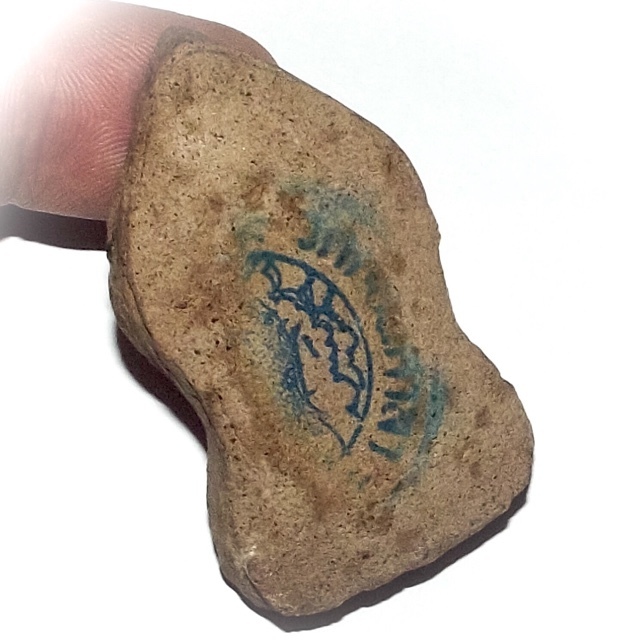 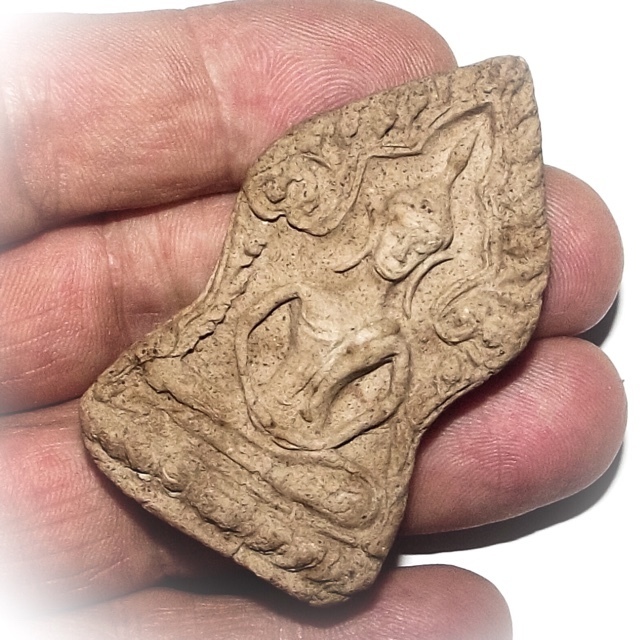 The amulets of the 2510 - 2512 BE Era were made after Por Tan Nam's second and final Ordination, and are famous for their content of Ancient Sacred Earthen and Powder Amulets of many Great Olden Days Masters, and the Maha Wan Herbal Powders of Pra Ajarn Nam mixed with his Pong Tang Ha Samrej 5 Sacred Yantra Powders. In these times, Por Tan Nam still mixed his own powders and made his own Yantra Inscriptions 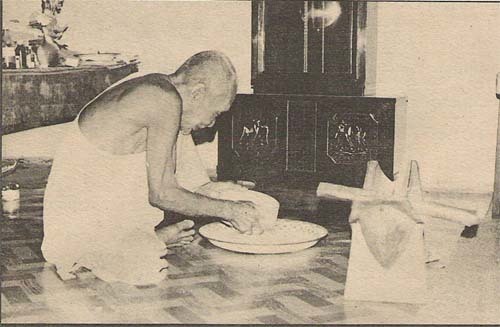 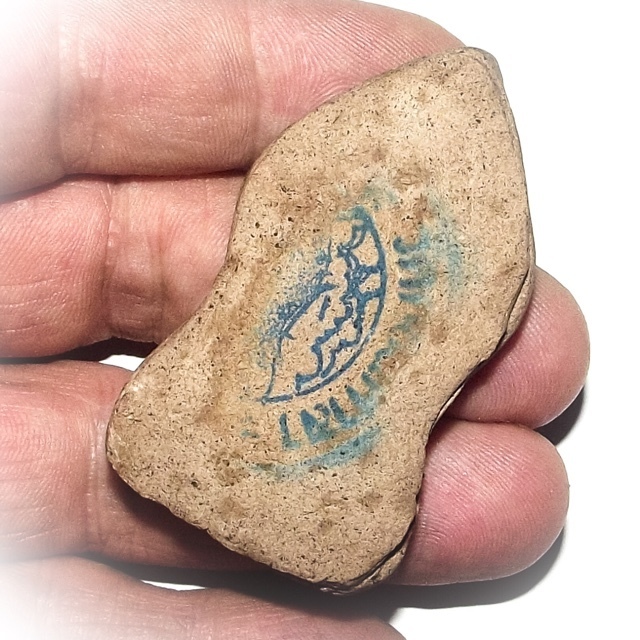 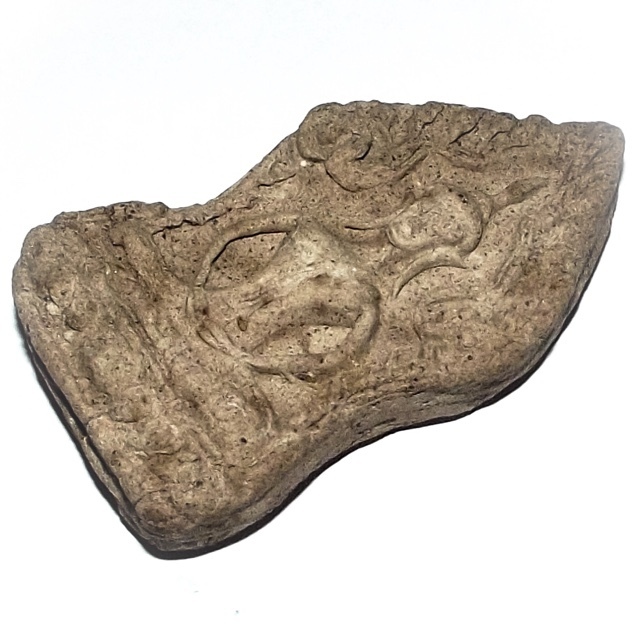 After you finish chanting, take the amulet, and tap your forehead or the crown of your head before leaving the house each day. 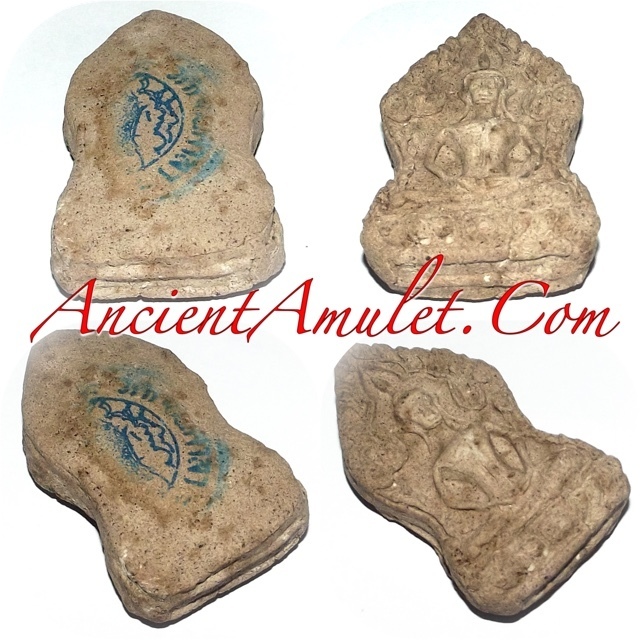