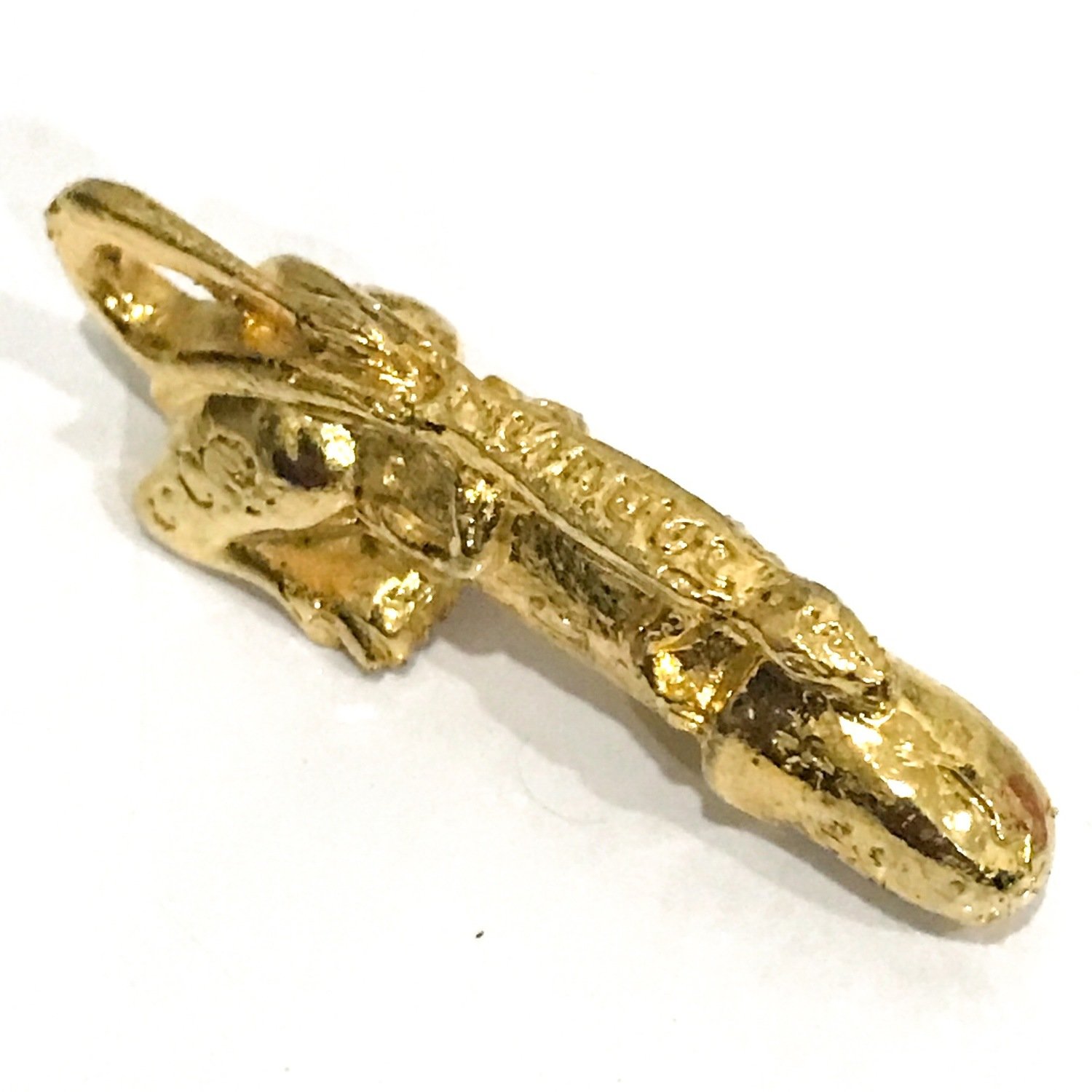 Luang Por Tong Bai was by born in 2453 BE in the city of Rachaburi, but was to become a Famous Gaeji Ajarn of the Ang Tong Province. His monk coins, Takrut and Palad Khik, are highly revered amulets within his fold of Devotees. Luang Por was very famous for his Kong Grapan Chadtri Klaew Klaad amulets, especially after his 2511 BE edition was released, and numerous miraculous events were reported by devotees. 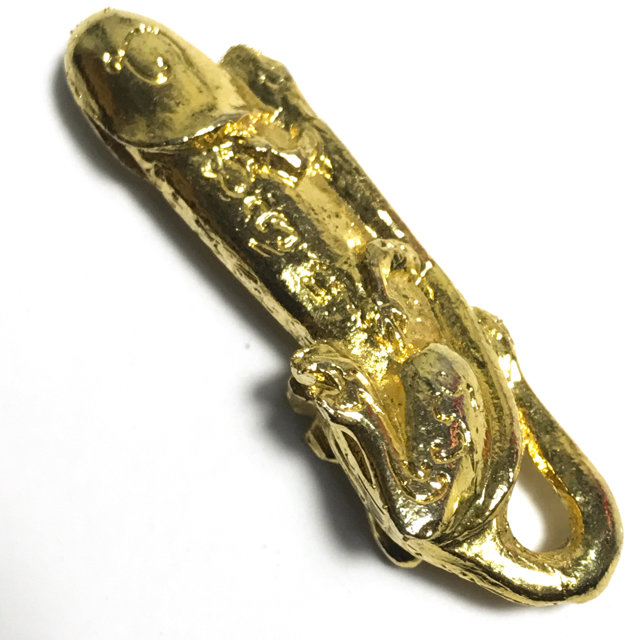 He ordained at the age of 20 in the year 2473 BE at Wat Khanong in Rachaburi, and remained there to study under his kba, and complete his academics. In the year 2485, he completed his 4th Bprian Academic Level in Dhamma. In the year 2493, the fold of devotees of Ob Tom township, who had become very faithful to Luang Por Tong Bai, invited him to come and be the Abbot of Wat Ob Tom. 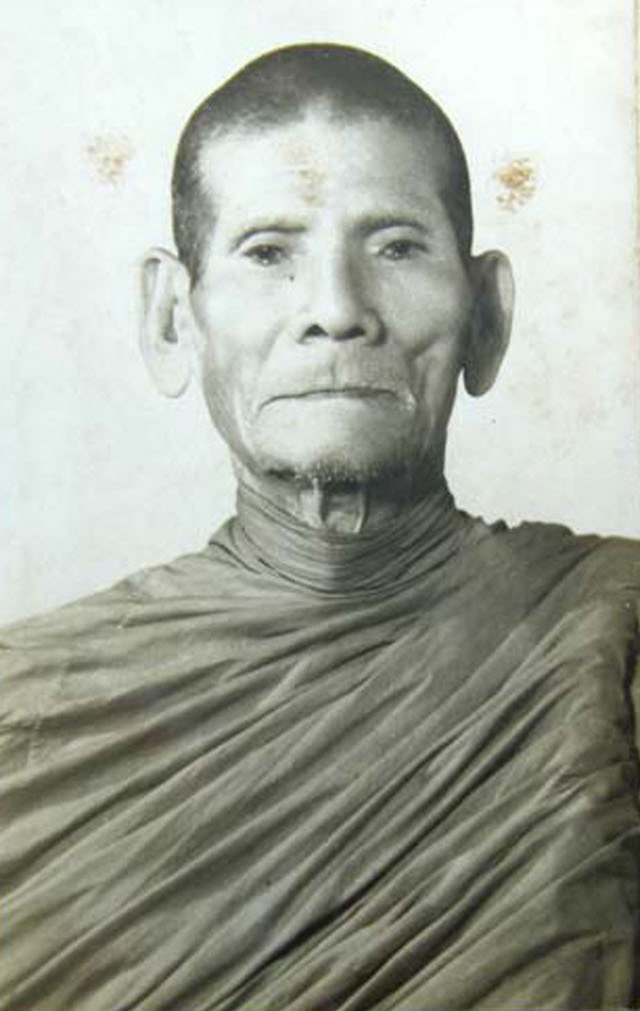 Luang Por Tong Bai accepted and remained Abbot of the temple untilo his passing in the year 2537 BE, at the age of 85. His passing only served to increase tghe faith of devotees in his miraculous powers, because his remains did not decay, and hair and beard continues to grow from his body, which is on show in a glass coffin in his shrine at Wat Ob Tom. 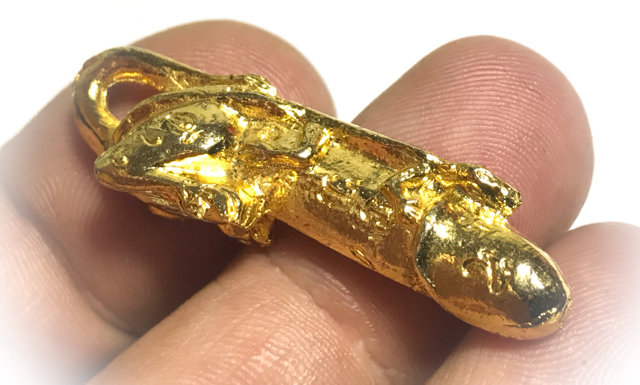 Luang Por Tong Bai was known for his idiosyncrasy of refusing to ride on a motorcycle, and his insistence on traveling by tractor. He likes to go and beg for alms in the early evening to get food for giving to the cats and dogs around the temple enclave. He is very popular for giving blessings to the cars and vehicles of his devotees, and his car blessing is highly reputed to be the most extensively fulfilled. 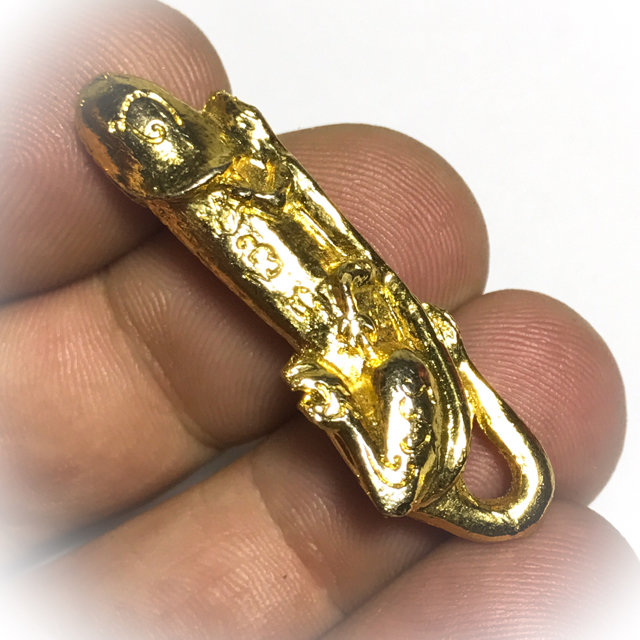 Luang Por Tong Bai would inscribe sacred Paeng Enchanted Talcum paste, not only on the windscreen of the car (as is the case with most Masters), but performs inscriptions and blessings on the whole car, even pasting blessings onto the wheel nuts. In the end the car is completley covered in Sacred Paeng and white all over.

The blessings takes quite some time to complete, but Luang Por is tireless and diligent, his blessings being 'No Holds Barred'. The final part of his vehicle blessing, is that the devotee must drive the vehicle and bump into something in front of Luang Por Tong Bai. 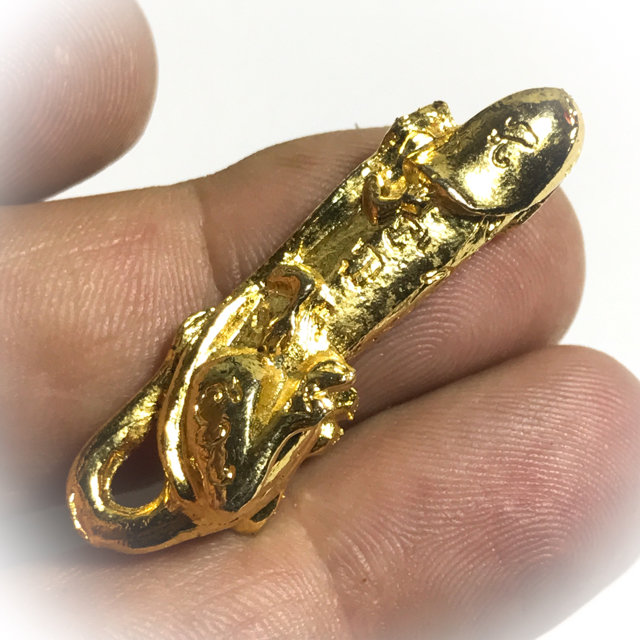 Some devotees in the past refused to bump into something for shyness, but had a bump immediately after leaving the temple. So it is very important for the devoptee to complete the ritual by making a symbolic crash by gently bumping into the target given by Luang Por Tong Bai before driving out of the temple.

One of Luang Por Tong Bai's most famous displays of power has been his ability to produce geckos out of his hands. He has been seen to perform Incantations into his hand and cause flames to rise up from his palm. After his passing away, his body did not rot or decay, and is to this day even now on display in a glass coffin in the shrine. He was a revered Kroo Ba Ajarn to many Great Monks of his Era, such as Luang Por Song, and Luang Por Kasem (Wat Muang). 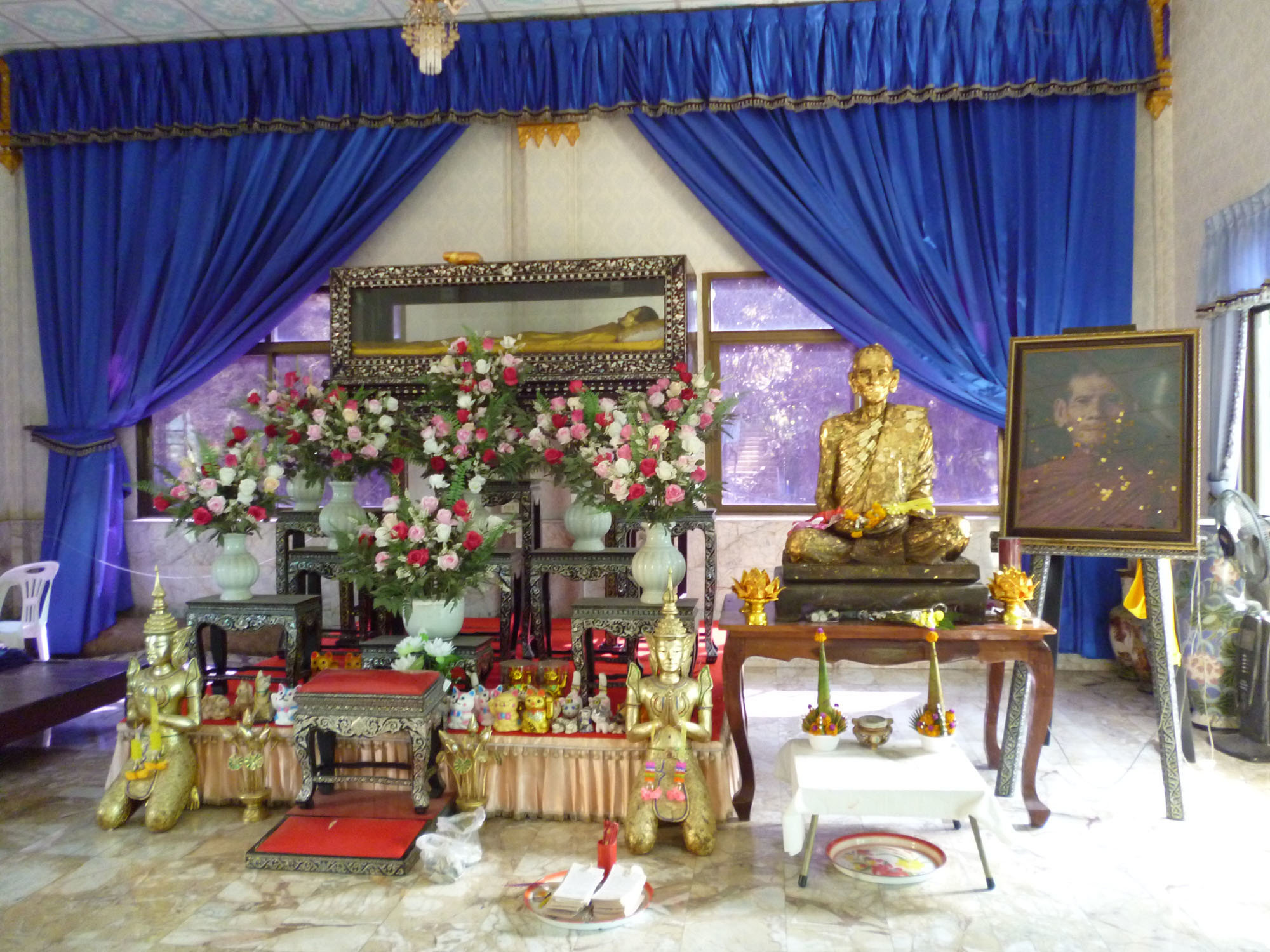 Luang Por Tong Bai was in himself a Devotee of Luang Por Tong, who was still alive in that time. His devotees included many members of the military and police forces, for his famous Kong Grapan Chadtri Klaew Klaad protective magic, that had become legendary from word of mouth tales of soldiers and police officers whose lives were saved by miraculous circumstances when wearing his amulets. Luang Por Tong Bai was also a friend and colleague of the great Luang Por Koon, who had great respect for each other. 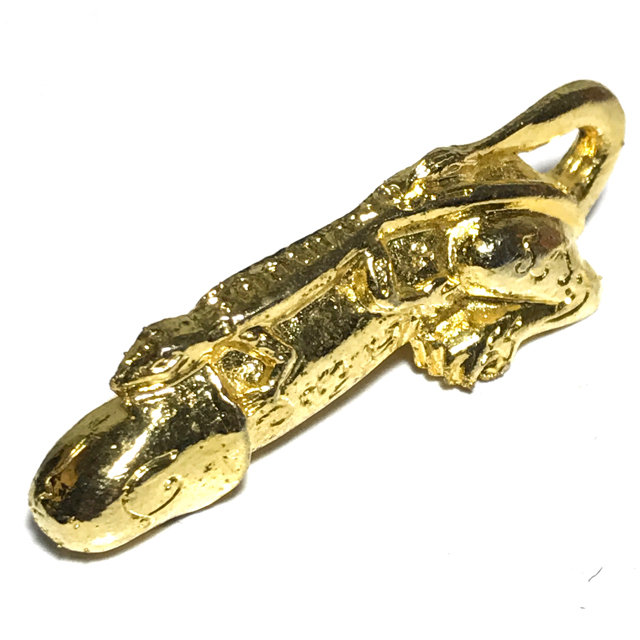 Luang Por Tong Bai was one of the Important gaeji Ajarn of the Ang Tong-Singhburi Region, but is also highly revered by Devotees of Rachaburi Province, for indeed the first part of his life was spent there, and was his birthplace. 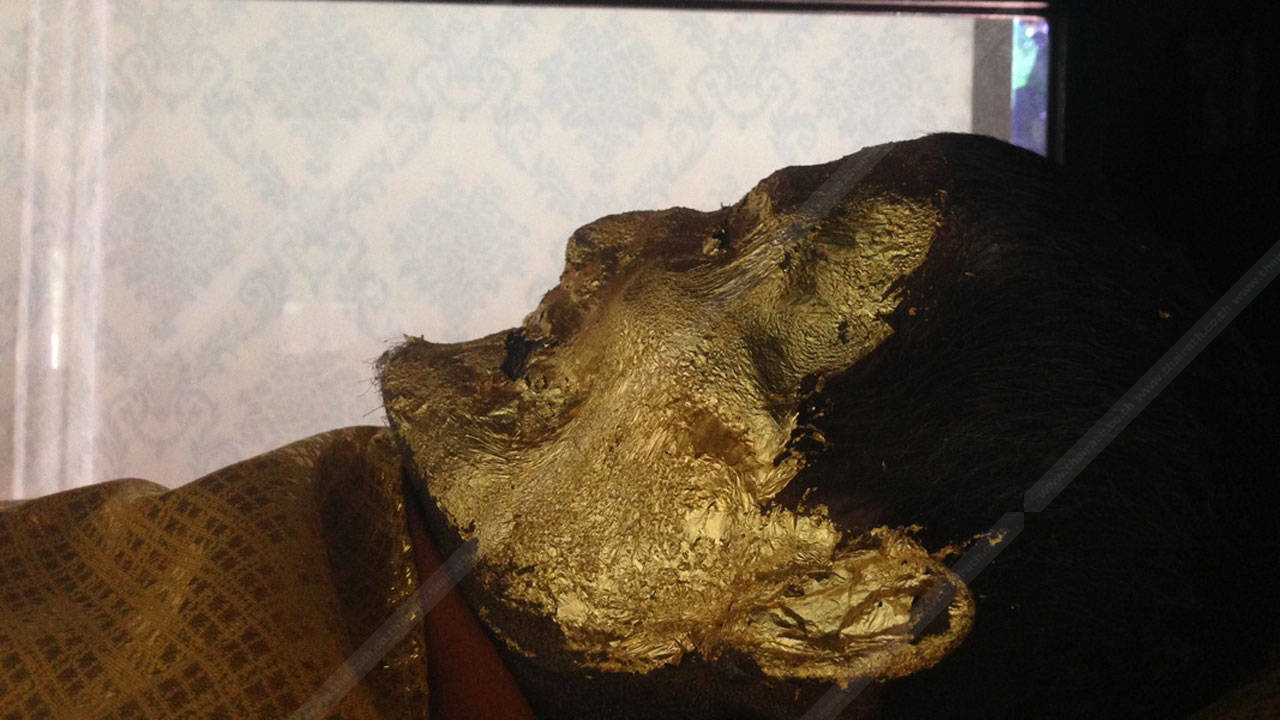 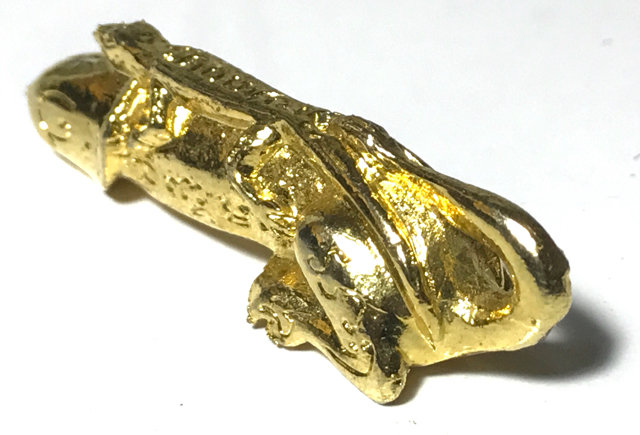 Simple Kata Chanting is enough normally to induce the power of the Jing Jok to attract lovers and customers, or to prevent Black Magic attacks. There are a multitude of different Wicha, and a large array of different shapes and sizes of Jing Jok used for different kinds of spells. Mostly they are of the Maha Sanaeh and Metta variety, but there are also pro-active Gecko amulets as well as those intended for more protective purposes, depending on the construction and empowerment of the spell. The ‘Jing Jok’ (Gecko) is a Magical Animal that has dominated Thai Mythical beliefs since the Pre Buddhist Times of Animism. In Olden Times, Thai people would say that if you hear a Gecko greet you when you walk out of the house to go out, that you will be befallen by good luck, and have all the boys or girls you want running after you, have lucky windfalls, and other auspicious blessings. The Gecko is also a powerful protection against Black Magic, for the Sorcery within the Gecko itself is so high as to prevent any other Dark Sorcery from entering the sphere.

The Jing Jok is a highly reputed amulet used for increasing your Gambling Fortunes, and is one of the favorite talismans of the perpetual gambler. Its power to improve Business Talks and Commerce (sales), is Famous. In addition, the Jing Jok is pure Metta Maha Niyom, and Maha Sanaeh, and has been the favorite Love Charm of many generations of Thai people, and seems to be holding its place as the most popular Love, Commerce and Gambling charm. The Jing Jok is however not only able to bring Lucky Fortunes and Love to its owner, but is also powerfully endowed with Kong Grapan Magic to protect from deadly accidents and harmful attacks. Anti Black Magic is inherent within the Gecko Wicha too, and keeps any Curses or Dark Sorcery at Bay. 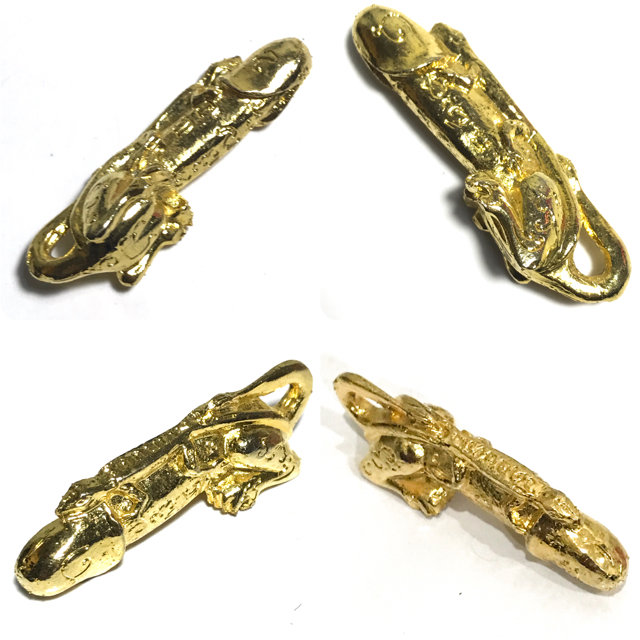