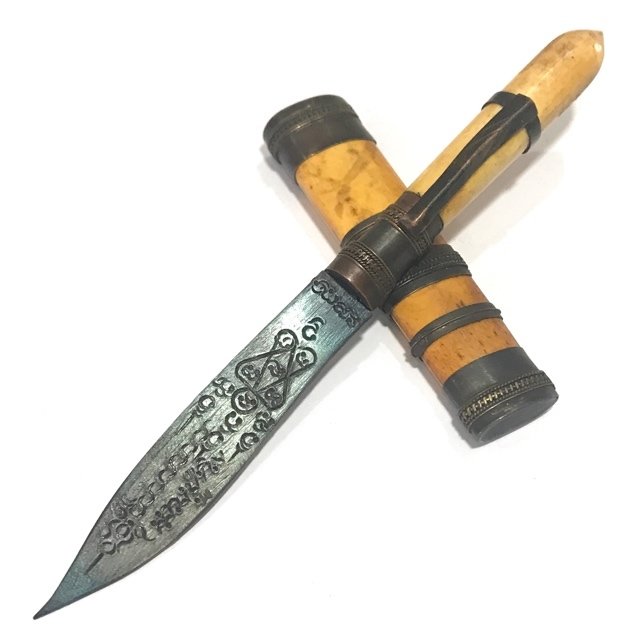 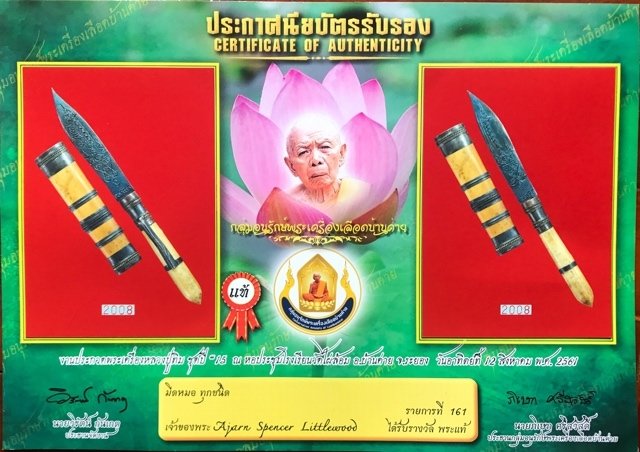 FREE EMS SHIPPING is also included in the price with this item. The handle of the Mitmor has a penclip, Lek Nam Pi blade with Khom Agkhara and the Yant Grabong Khwai of Luang Phu Tim engraved, with Penclip attached to for carrying in the pocket like a pen. The Mitmor is completed with Ivory Sheath and Handle, which has been bound, strengthened and embellished with metallic closures. A very powerful portable ritual weapon and protective Talisman, that is Extremely Rare to see from this Master. 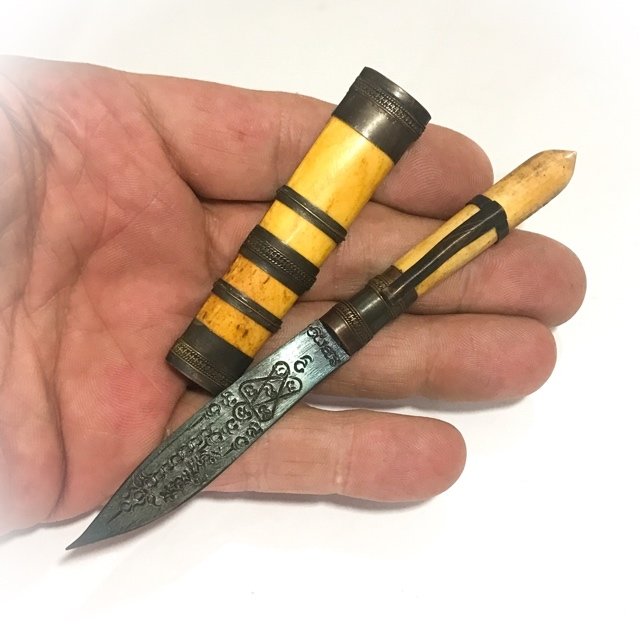 The Mitmor Ritual Spirit Knife can be carried for protection and good fortunes, but can also be used proactively as a Magical Instrument for Spellcasting, Exorcisms, Holy Water Stirring, and wearing (carry in pocket like a pen), for Protection against all dangers, evils and black magick, and to induce Maha Lap Maha Pokasap wealthy Fortunes. 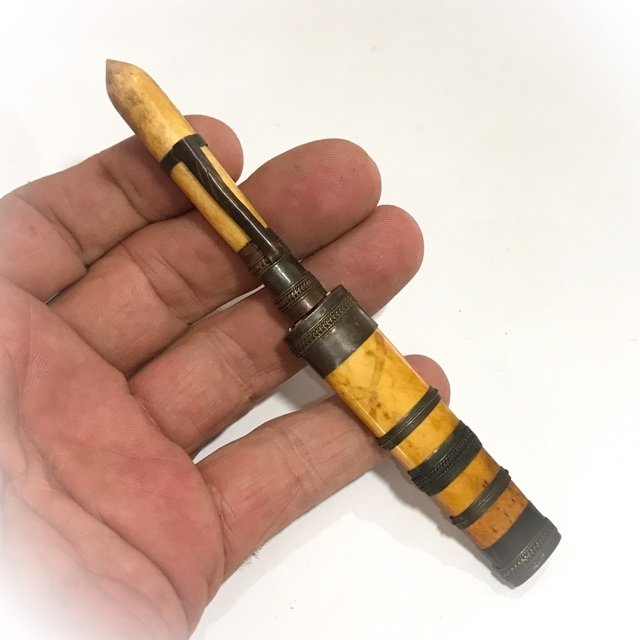 The Mitmor is used for Bucha to pray to for Blessings, but is also a kind of Magic Wand, Sceptre of Command over Spirits and Ghosts, and a Weapon to Banish Evil Spirits and Nullify Curses. Mitmor are used by the Masters to perform Inscriptions on the devotees, or upon inanimate objects, to invoke magical spells and bestow blessings. 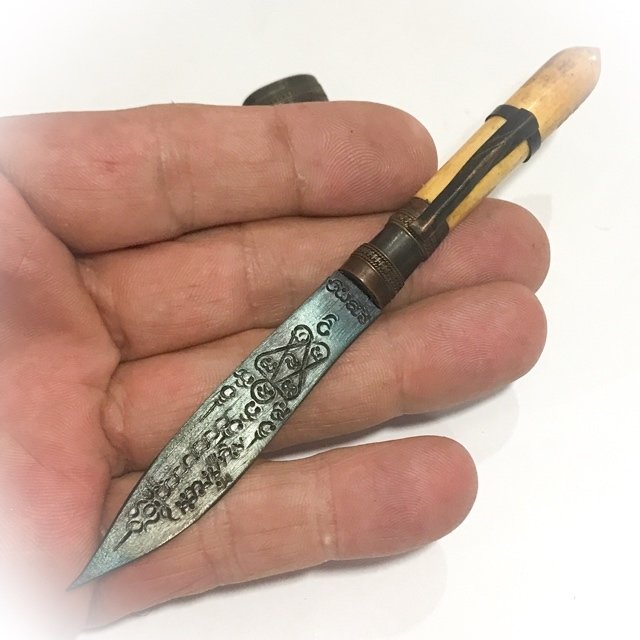 The Mitmor can be used to stir and empower prayer water, whilst performing incantations for whatever kind of blessings one may seek to invoke, be they Kong Grapan Chadtri Klaew Klaad, Maha Lap Maha Pokasap, Jerajaa Khaa Khaay, or Metta Maha Niyom Maha Sanaeh. You can use Buddhist Prayers and Candles to perform Holy Water Making, and stir the water in a clean clear bowl with clean clear water in it. 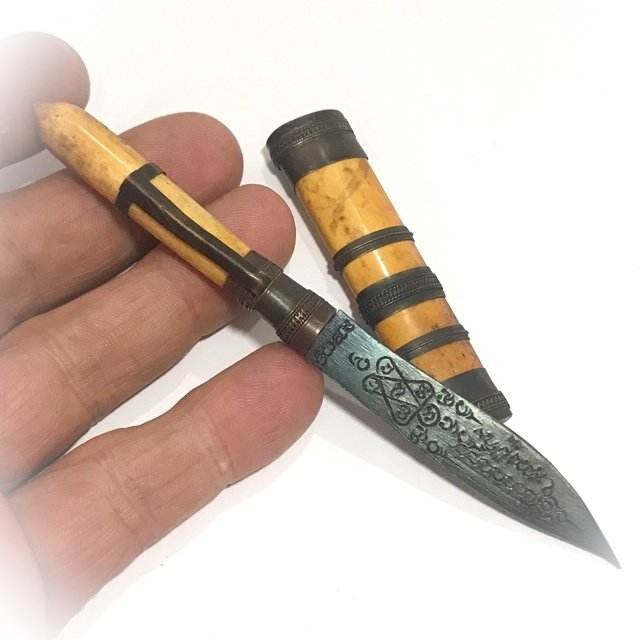 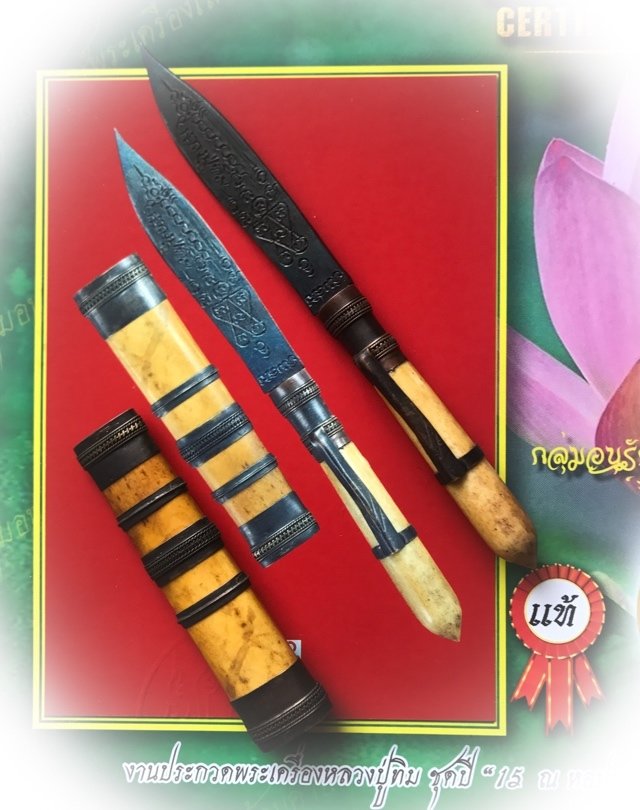 Kata for Implementing the Mitmor to Emit Magic to Banish Enemies and Demons, Black Magic and Ghosts; 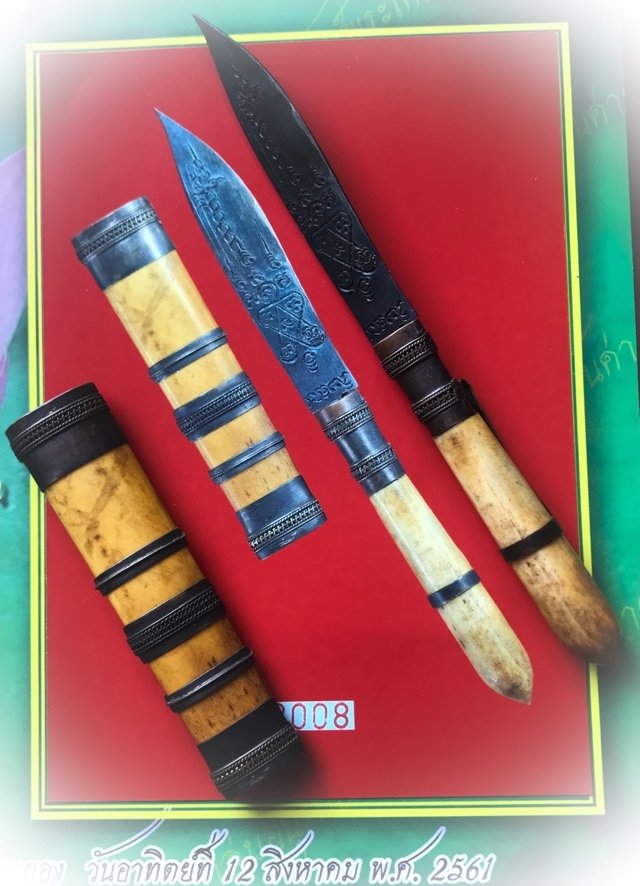 Luang Phu Tim Issarigo, was of course not only one of the most highly acclaimed and sought after Guru Monks for his amulets, he holds of the highest esteem in Thai Buddhist amulet history for his Pong Prai Kumarn powders. Luang Phu Tim, is Internationally Acclaimed, for his famous Pra Kring Chinabanchorn, his Pra Khun Phaen Pong Prai Kumarn, and Look Om powder balls. 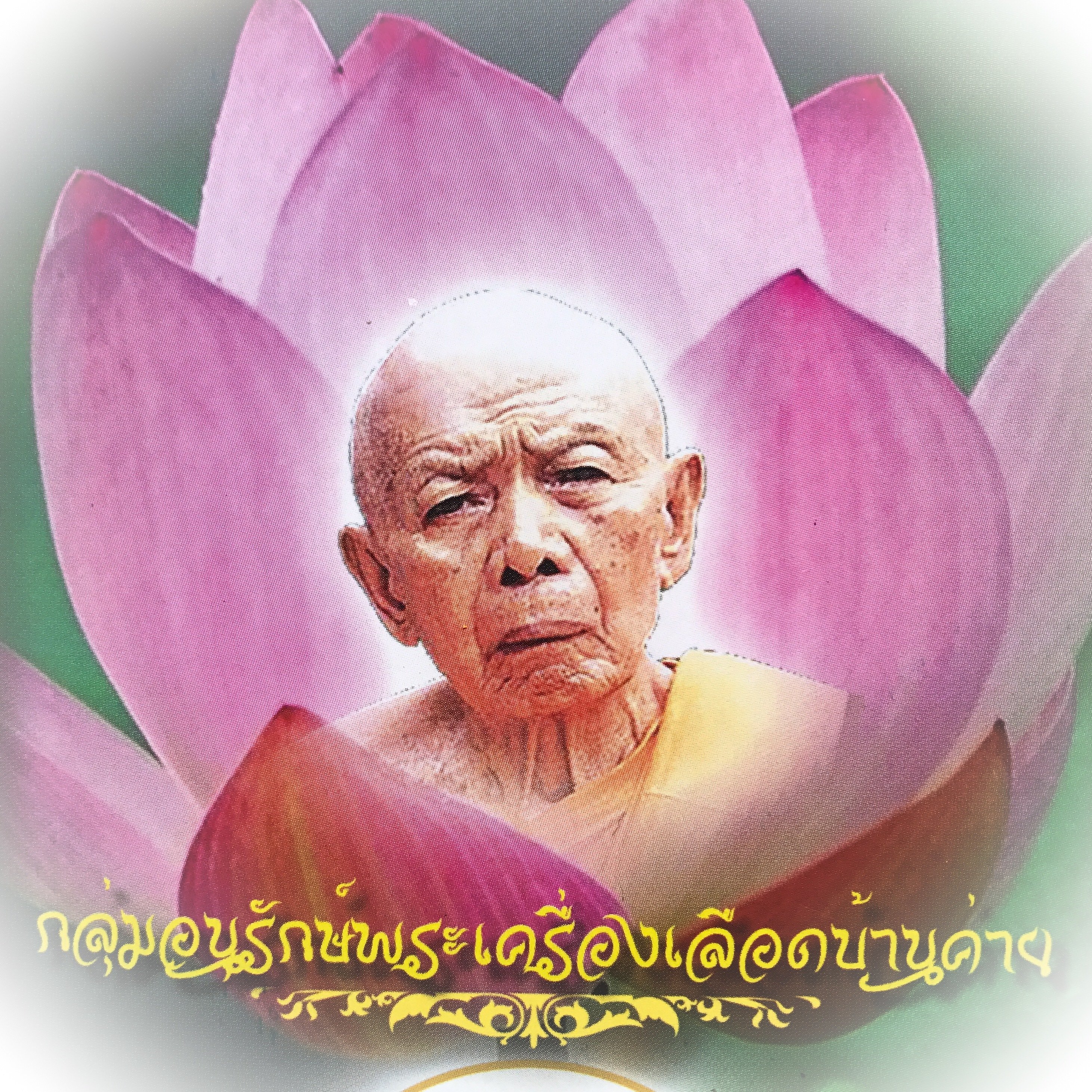 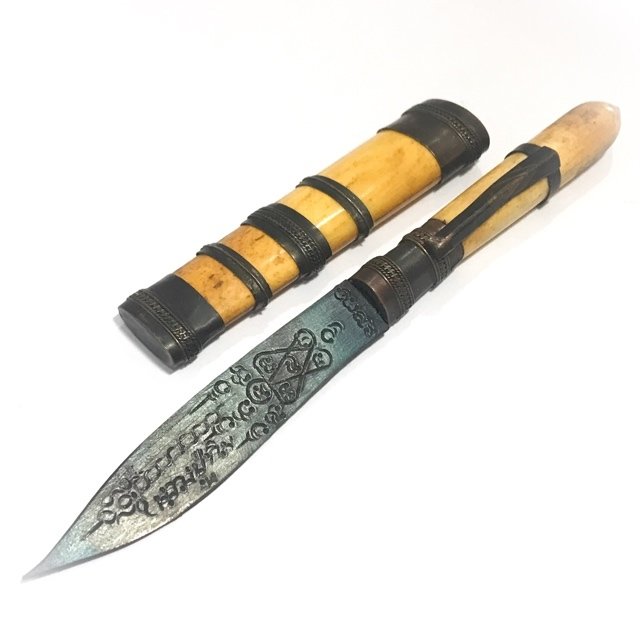 The Pra Kring Chinabanchorn amulet of Luang Phu Tim is one of his most expensive of all amulets, and extremely rare to find. He has various direct lineage apprentices, Who are continuing to progress and spread his most powerful and world-famous Wicha. Of all of these masters, perhaps the most famous, preferred, is Luang Por Sakorn, of Wat Nong Grub (also now deceased).

In second place one could estimate the great Luang Phu Sin, of Wat Laharn Yai, and in third place, possibly, Pra Ajarn Somkid, of Wat Beung Tata (Rayong). Also, recently, intense interest has arisen in the amulets of Luang Por Rat, who is also rising in status as a Lineage Master of Luang Phu Tim, who has gaiined a large following in the North, with his Charitable Deeds and Powerful Amulets. 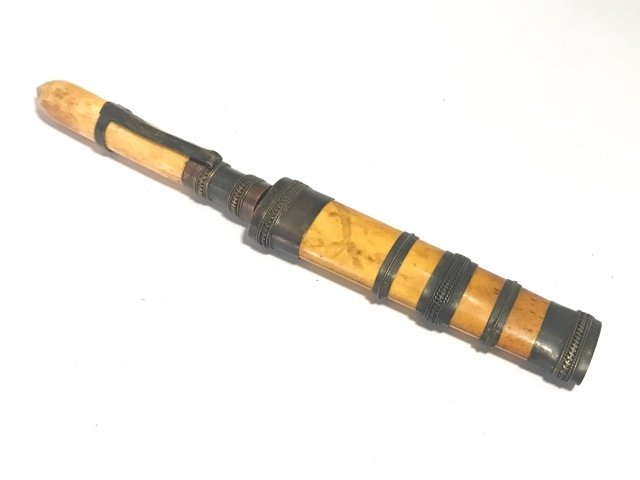 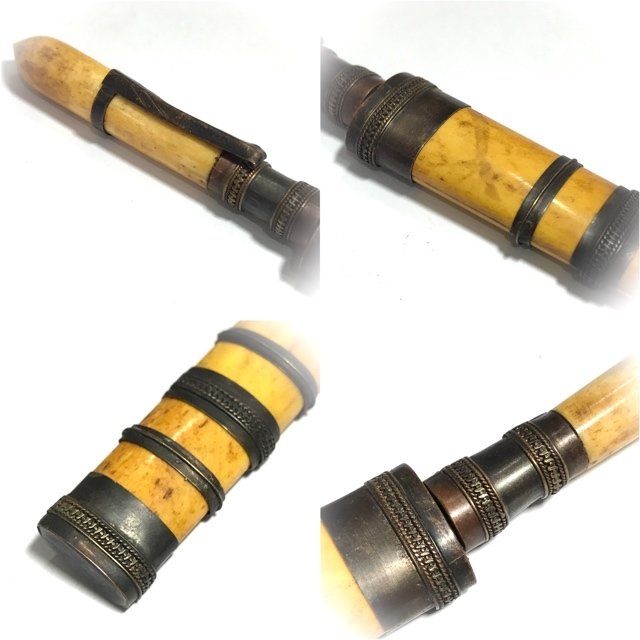 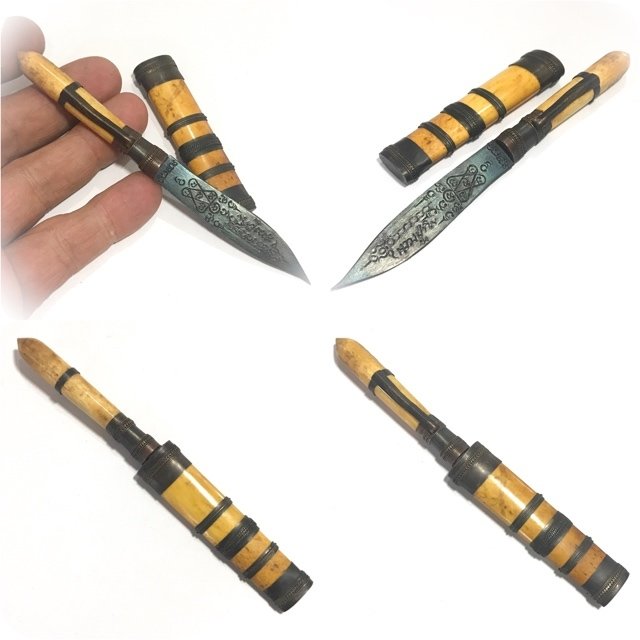