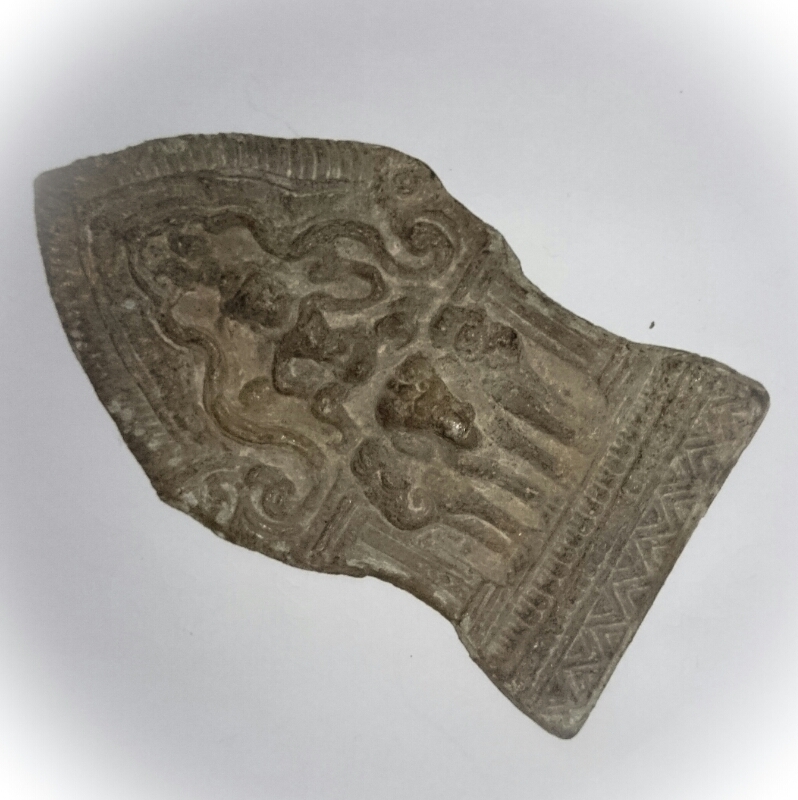 This is a truly exquisite sacred Leaden Artifact made from Nuea Chin Alchemical Leaden Muan sarn Substance, which was dug up in an Archeological Dig in the Temple Grounds of a North eastern Region temple around 100 years ago. The actual exact age of the artifact istelf is unknown.

It was buried in a Kru Hiding Place along with a host of other artifacts. This is a common practice performed by Guru Masters to preserve Buddhist Artifacts and ensure the knowledge of the existence of the Buddhist Religion, by hiding artifacts so that they are found by future generations, as a way of letting people in the future know that there was once a time when the Buddhist faith was in its Heyday in the region. 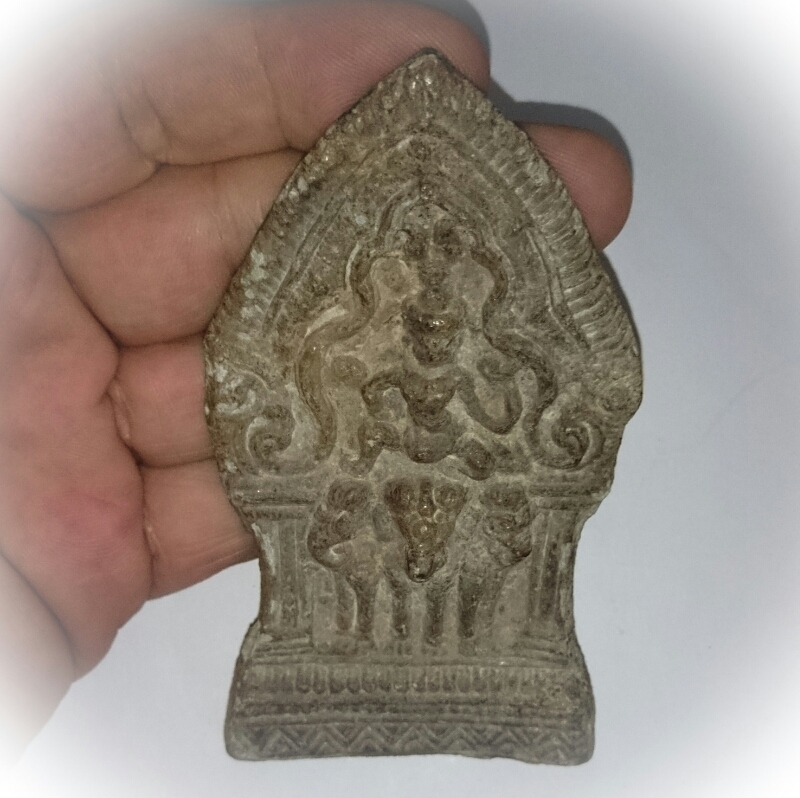 Apart from it being of course an extremely collectible historical artifact, it is essentialy a Sacred and Powerful Bucha for reverence and prayer, and is empowered by the Olden days Masters who made it, in the classic Lopburi Era style of Thai Buddhist Art.n A predominantly Khmer Influenced style is evident, as is Ubiquitous in the lopburi style of Buddhist Sacred Art, depicting the God Indra sitting on the 33,333 Headed Erawan elephant. 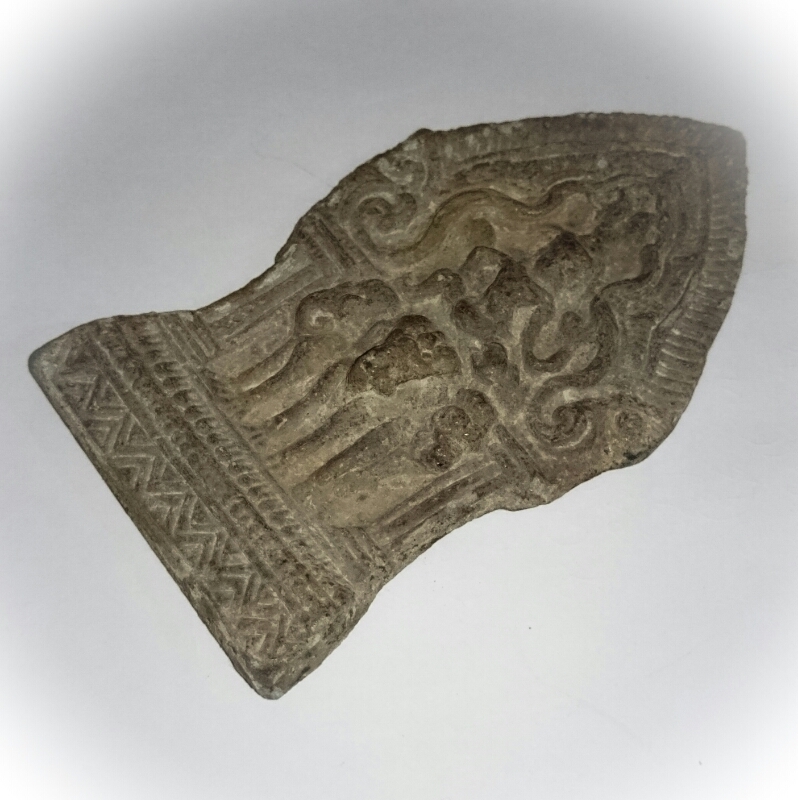 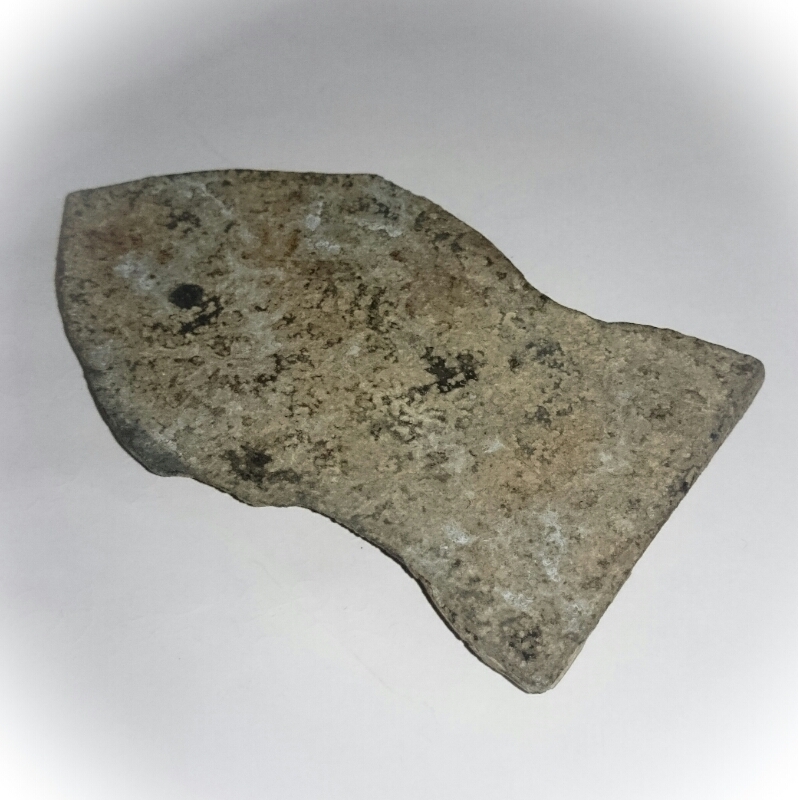 Erawan is is the steed of the God Indra of the Dawadeungsa Celestial Heaven.

The Daewadeungsa Realm is the next realm lying above the Jadtu Maha Rachiga. It is 336 Million Wa higher, and is on the peaks of Mount Meru (Pra Sumen). It is the Domain of Indra. It is 8 Million Wa in width, with a City called Trai Dtreungs.

This City has a thousand gates, and a crystal wall around it. Each gate has a a crystal diamond palace on its spires. When any of the gates open or close, they make a beautiful sound like music. There is a castle in the center with nine crystal forms which is 256 Million Wa high. 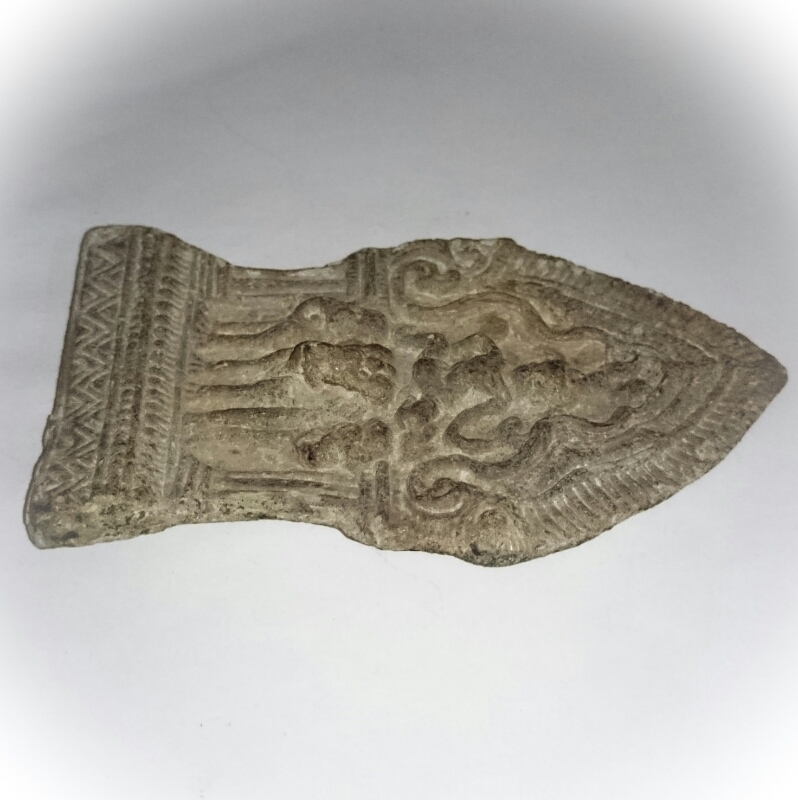 • In the Eastern quarter, there is a Divine Heavenly Garden, called Nantrawan, or, 'Nipaawan' 800,000 Wa in diameter and the gate has a Crystal Palace and with Immense Majestic Park within it. It is filled with Divine treasures, beautiful fruit trees and flowers in bloom. There is a large Lake called Nantaa Bogkhorani with crystal clear blue water with two crystal pillars called 'Nantabaditipasan', and 'Julanantaabaditipasan'. All is soft to the touch, with a smooth and silky surface. There is a large Forest called Maha Pon, with a golden wall surrounding it. Likewise, the Gates of this Kingdom are topped with Crystal Gem Palaces, and is 500 Thousand Wa in diameter. There is a Golden Palace within it and two Parks called Suan Mahawan and Suan Nantawan. A Crystal Dolmen with a Crystal parasol above it. 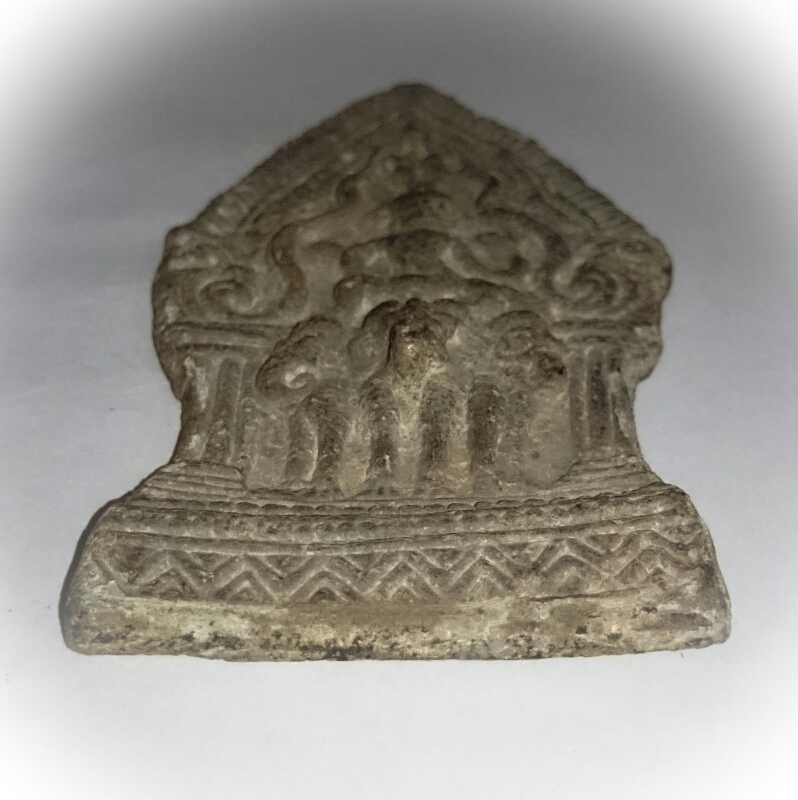 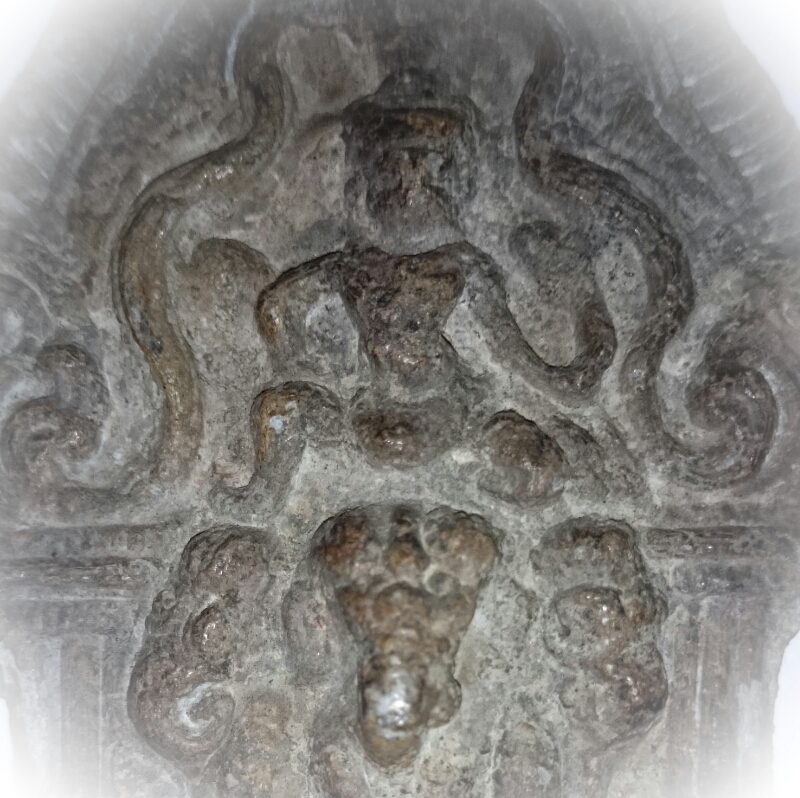 • In the South, there is a Great Park called 'Parusakawan', 5,600 Thousand Wa in diameter the gate has a Crystal Palace and with Immense Majestic Park within it. Above this Gate is a Crystal palace. Within it, is a double Lake, called Patrabogkhorani and Supatrabogkhorani – next to this were two glass like stones, named exactly the same. The stones are very smooth and soft. 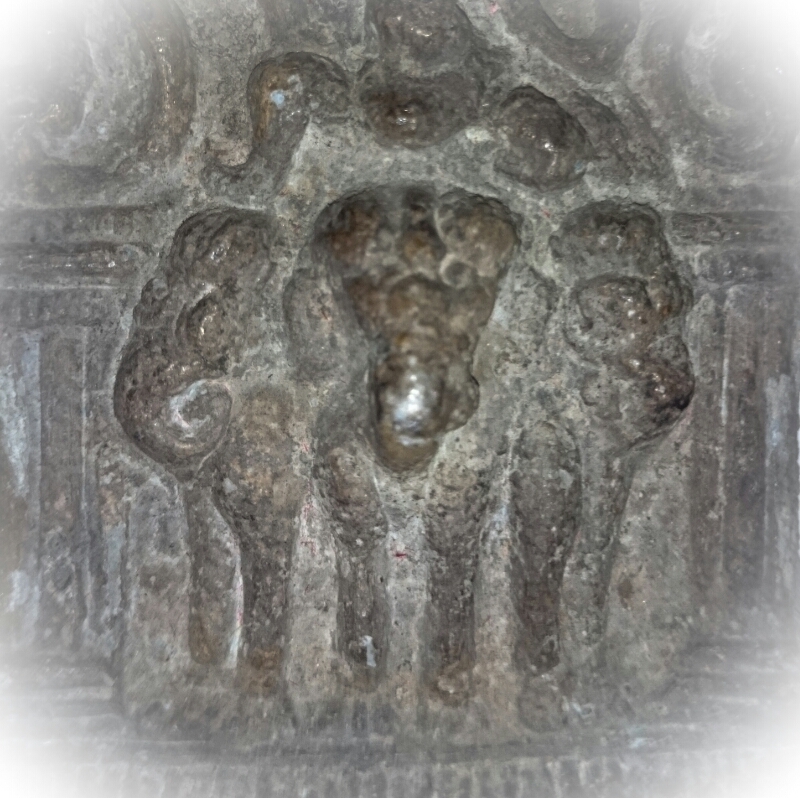 • To the West of this Realm, is the Jidtraladawan Park with a diameter of 400,000 Wa. This Quarter of the Realm houses also two lakes, Jidtralada Bogkhorani and Julajidtraladabogkhorani with a crystal monolith, called Jidtra Pasan. 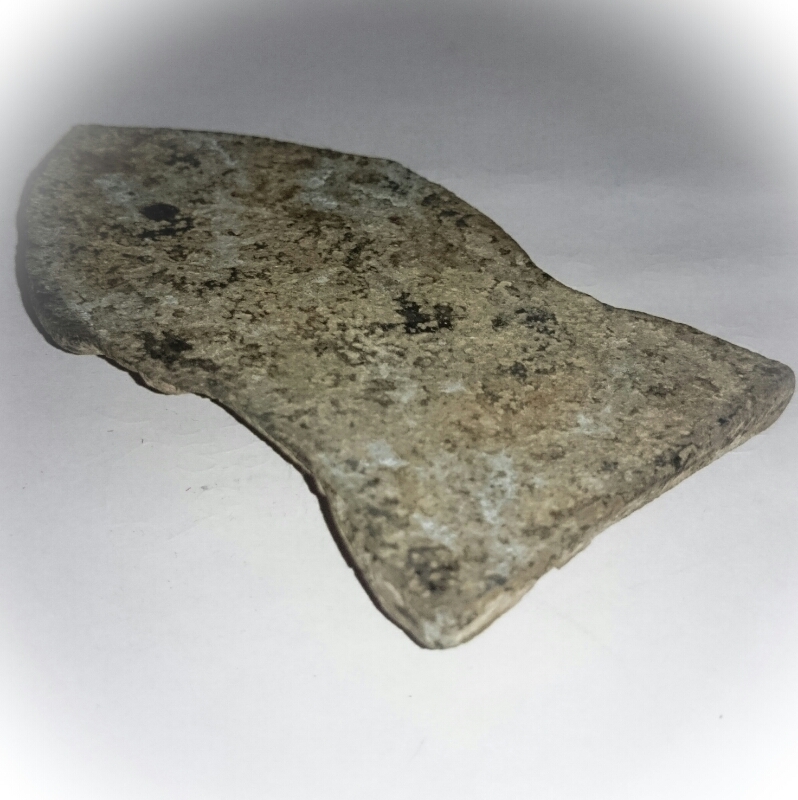 • In the Northern Quarter, there is an Immense Park full of beautiful trees and flowers, also with Gates and Palaces above each gate. This area is 50 Thousand Wa in diameter. There are also two large lakes, one called Tamma Bogkhorani, and the other called Sutamma Bogkhorani. The two monoliths of crystal are called Tammaa Bpadtitipasan, and Sutamma Bpadtipasan
A Golden Throne is pulled by a Golden Horse, with pearl and flower garlands. When the wind blows the sound of the Conch, Drum, Vina and Flute can be heard from the Devas playing in the Sky.

On Pra Sumen (Mount Meru), there is an Elephant which is the Vehicle of Pra Intr (Indra). This Elephant is called Erawan. Erawan is 1 Million 200 Thousand Wa high, and has 33 heads.
When Pra Intr rides upon his steed, the Erawan Elephant swells up and grows in size becoming even more immense. A host of Nang Fa devas (female Angels) are dancing and singing around Erawan and Pra Intr (Indra).

The thirty three heads of the elephant possess Two Hundred and Thirty One Tusks, and One Thousand Six Hundred and Seventeen Lakes on them. 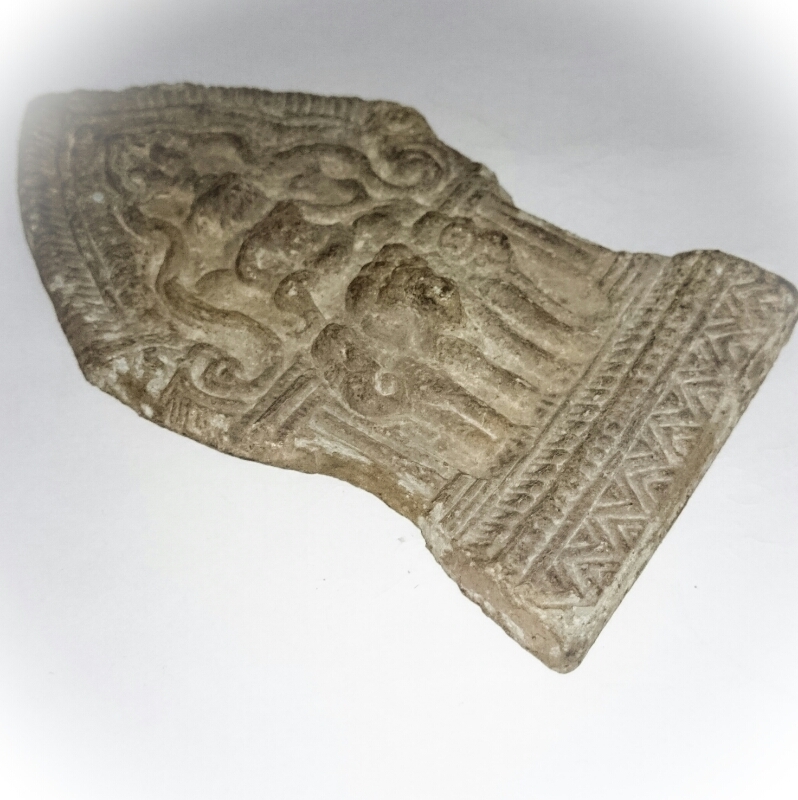 Erawan is featured in the Ramakian Epic Myth (Thai Ramayana), and is killed by Hanuman who breaks his neck in the fight against Intarachit, a soldier of the Asura Giant (Yaksa), the Twenty Headed Totsagan.

Intarachit throws himself into a fury rage and transforms into Pra Intr riding on Erawan and shoots his special weapon the Prohmamas arrow, which hits Hanuman after breaking Erawans neck, and Hanuman falls to the ground and into a slumber.

The Wonders of Dawadeungsa Heaven

In the Dawadeungsa Realm, there are various Amazing Legends, for example, there is a Lake with the Pra Julamani Chedi, with a Bparichadta Flower, which blooms only once every Hundred Years. When the tree flowers, the bloom glows with a bright aura of light which reaches as far as Eight Hundred Thousand Wa into the distance.

The Dawadeungsa Realm, also called Trai Treungs, or Dawatingsa Bhumi, gets its name from the fact that it is the Residence of 33 different Powers, or Deva Lords, who are ruled by Pra Amarintratirach (Pra Intr). Notice the parallel between the 33 heads of Erawan and the 33 Deva Lords under the Rule of Pra Intr.

The Name Dawatingsa Bhumi (pronounced 'Dtaawa Dtingsaa Poom' in Thai), means 'The Land of the 33 Deities'. These 33 represent Pra Intr himself, and 32 of his Companions. The legend tells that, as Pra Intr was still born on Earth as a Brahman called Makamanop, he invited 32 of his colleagues to join him in Meritorious accumulation of good deeds. They built public refuges, roads, and thiings which were of benefit to the people. They practiced the 'Sadtabpathaanawadtr', or, seven forms of regular practices;

1. Care for and treat ones parents with respect
2. Do not disrespect the Older Generation in the Household 3. Speak kind and politely
4. Do not speak hurtfully to, or be critical of others.

5. Do not complain often

6. Be Honest and Trustworthy always

Makamanop spent his life doing good deeds and keeping these Moral Virtues intact, and when he died, he reincarnated in the Dawadeungsa Heaven. In this heaven, there were in fact already some Angelic Beings existent (called the Naewasika Taepabudtr), who saw the arrival of Makamanop and his entourage of 32 friends, and brought a large container of Kantabala nectar to drink, offering half of it to Makananop in greeting. 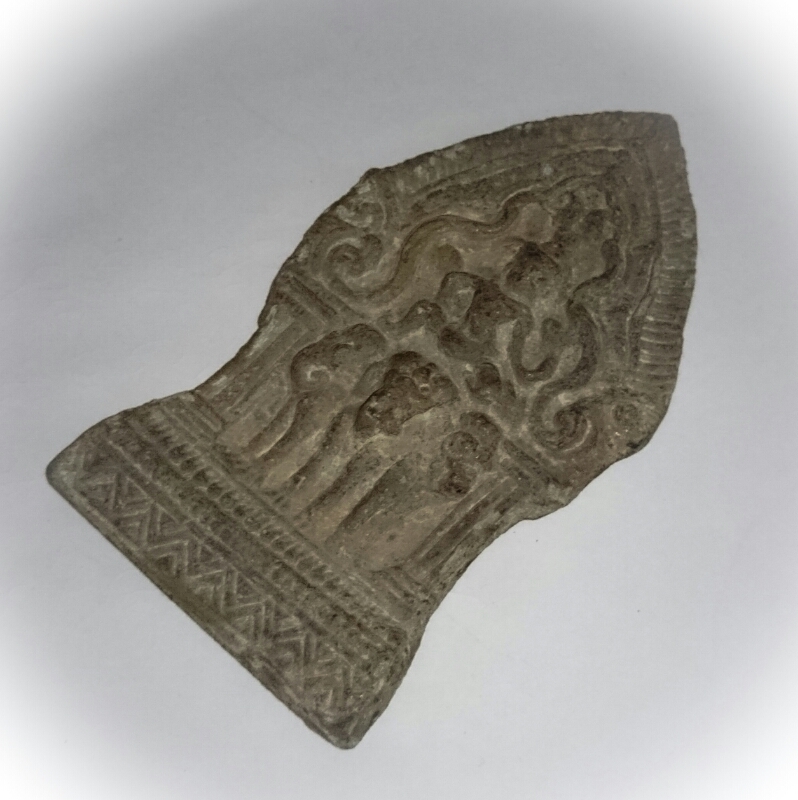 But Makananop did not desire to drink any, because this nectar had an intoxicating effect , so he told his people to not drink any. So then the Angels who had already lived in this Realm, began to drink all of the nectar themselves. They soon became very intoxicated and lost their common sense and became very obnoxious, so Makamanop grabbed them all and flung them down from the Dawadeungsa Realm, because he did not wish to live with them.

He then declared himself as Lord of the Realm and ruled over his entourage of thirty two Devas. This was when he received the name of Somdej Pra Amarintaratirach (The Lord with 32 Companions). This is also the Meaning of the word 'Dawadeungsa', namely 'The Heaven that is the Home of the 33 Devas'.