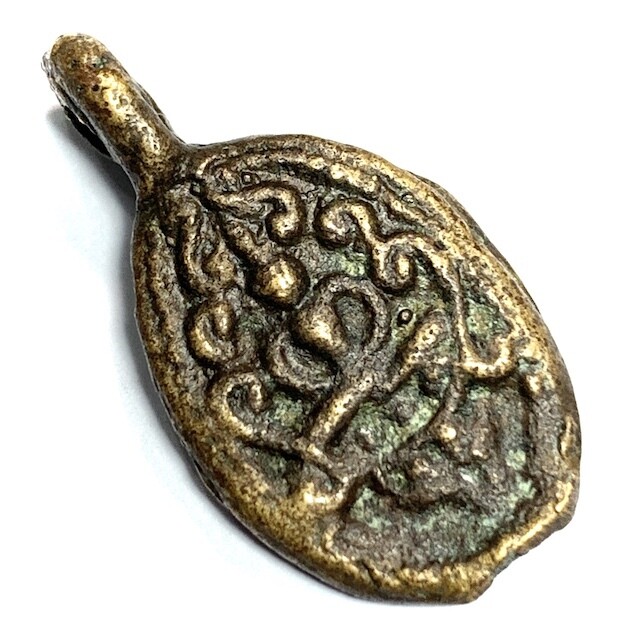 A Pristine example of the Rian Lor Pra Put forged alchemical brazen metal alloy Buddha Coin amulet, from Luang Por Im, of Wat Hua Khao, in Pim Lek small size, measuring 3 x 1.5 Cm. This is a Rian Roop Khai Pim Pra Put Pang Nang Samadhi, and is one of a number of different rare models which are seen to be in existence from Luang Por Im.

Luang Por Im was an olden days Guru Master, born over 150 Years ago, in 2406 BE, and who passed away long ago in the year 2480 BE. His amulets are very rare, far and few to come by, and extremely prized with the niche collector/curator, as well as extremely sought-after for their Magical Power. 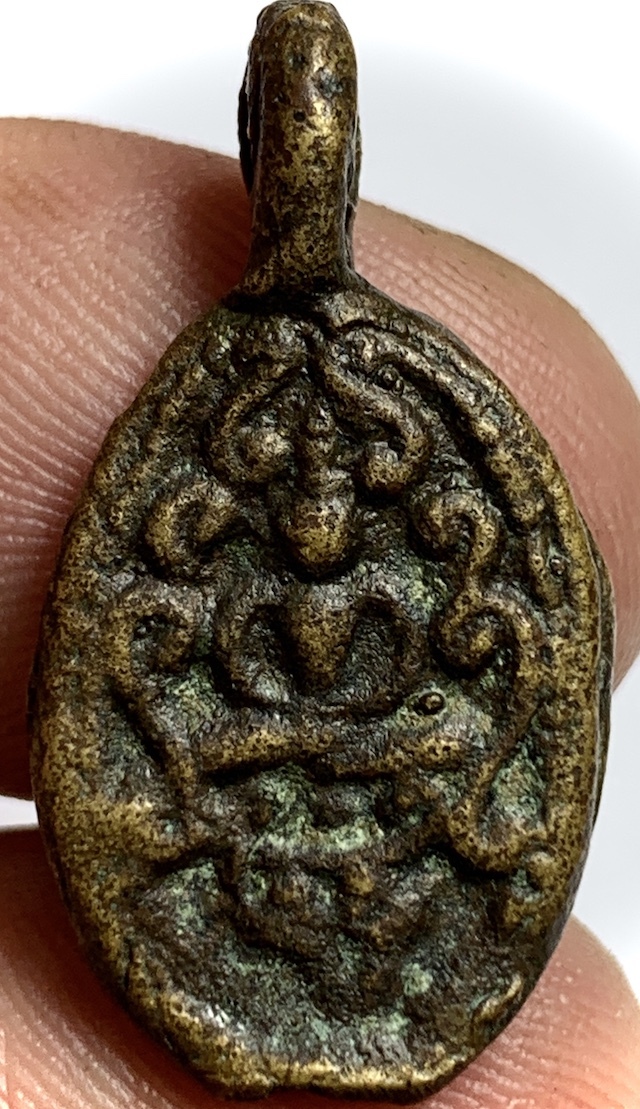 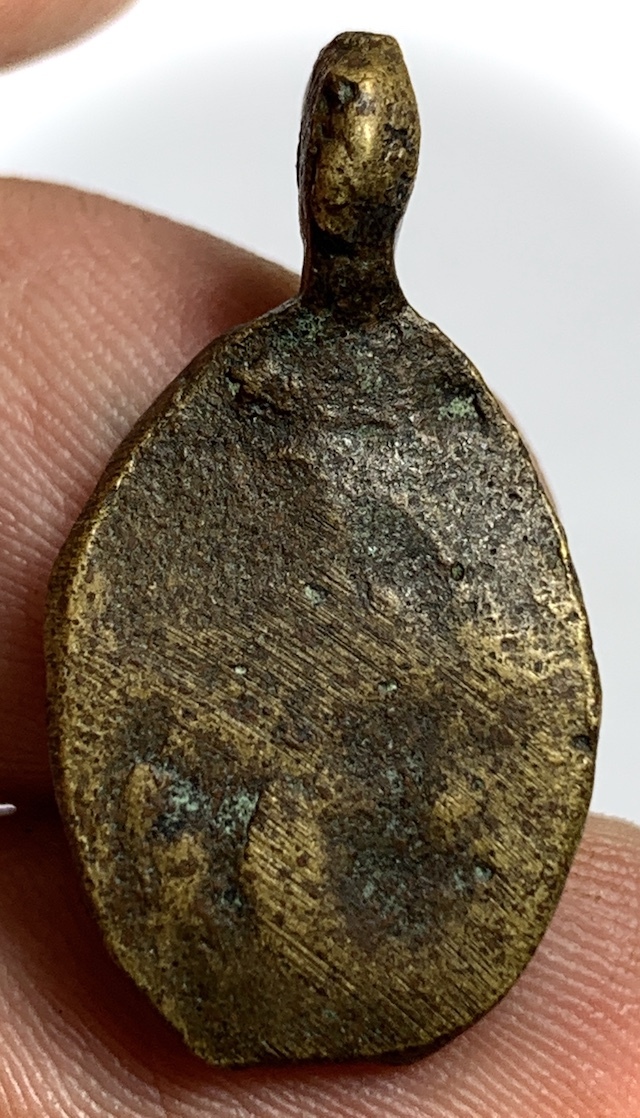 He was extremely famous for his Takrut, Magic Rings, Nang Kwak, and other 'Lor Boran' ancient style cast metal amulets, using alchemical metallurgy. Luang Por Im was known as the Koo Suad, who assisted the great Luang Por Mui, of Wat Don Rai (a great Buddhist master in his own right), in his ordinations as a Buddhist Monk. 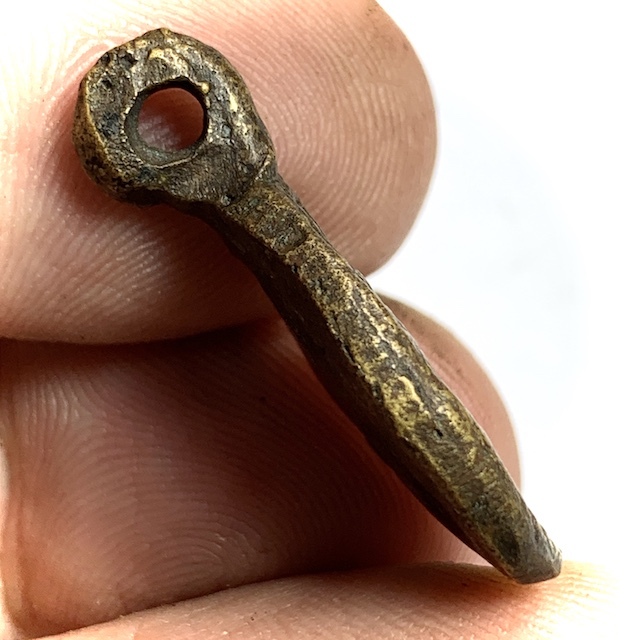 The amulet was made sometime around 2460 - 2470 BE. The amulet is very old and rare, and is famous for its protective power against Dangers, Black Magic and Maha Pokasap to attract and retain wealth and treasures. This amulet is a 'Niyom' class preferred amulet, of the finest artisanship. Apart from coins and statuettes, Luang Phu Im also made various models of magic rings, some of them of simple design, with various metals, and others with finely designed decorative designs in heavier cast metal.

This model is one of the rarer and highly decorative exhibits. and is recommendable for the devotee who seeks the Magical Power, but also seeks a perfectly pristine example for competition entry. 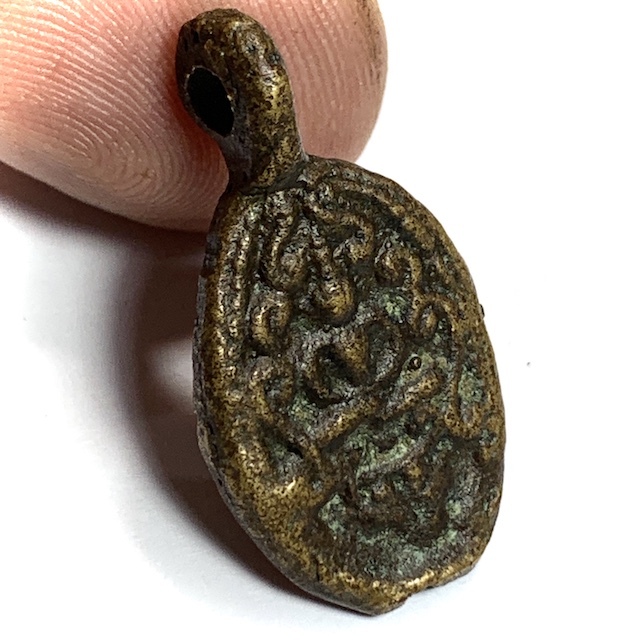 A very rare and highly preferred magic alchemical metal Buddha Image amulet of Good Karma Increasing Power, using the Wicha of the Ancient Alchemists, to smelt and forge the Sacred Chanuan Substance, forged from a highly sacred and powerful admixture of alchemical metals, and ancient artifacts, using a combination of metallurgy, and alchemy, and the power of incantation. A powerful protective amulet with wealth increasing powers from Olden Days Miracle Monk, Luang Por Im, of Wat Hua Khao. 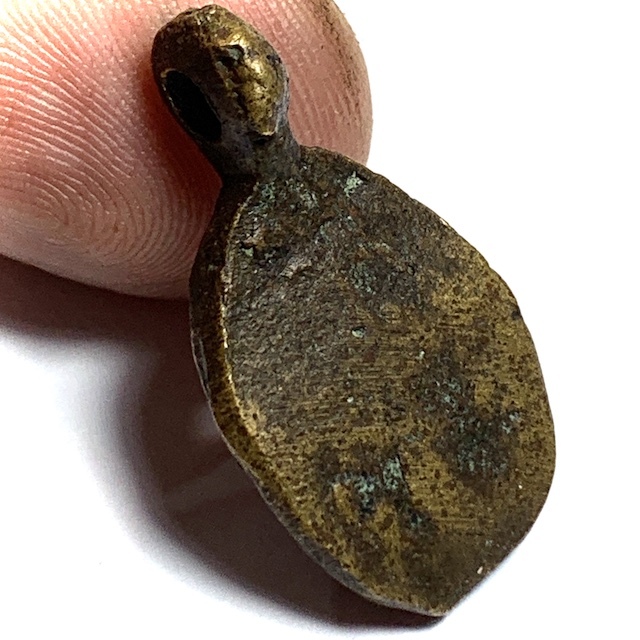 The amulet itself is formed from brazen alchemical metals with a certain quantity of brass, bronze, gold and silver. The substance is empowered by performing Elemental Invocations until the structure of the metal changes, and becomes a sacred Metal of Alchemical Nature. Alchemy and Metallurgy are combined here as one facet of the various aspects of empowerment of the amulet. 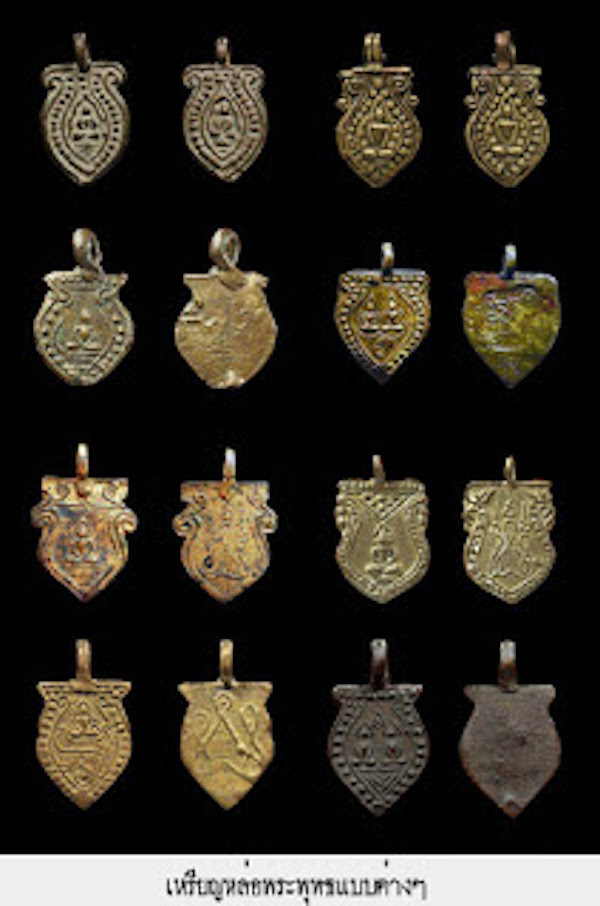 Sacred Alchemical Metals especially apt for channelling Magical Forces. It has the reputation of being able to 'Hnun Duang Chadtaa' (improve Karma and Horoscope, Luck, Fortune, Destiny and Fate). It is also reputed to be able to forewarn of Dangers or Enemies. As a sacred metal for the Creation of Sacred Rings and other Amulets, alchemical metallurgy is the most Apt and Effective method to use for powerful effects with metallic amulets. 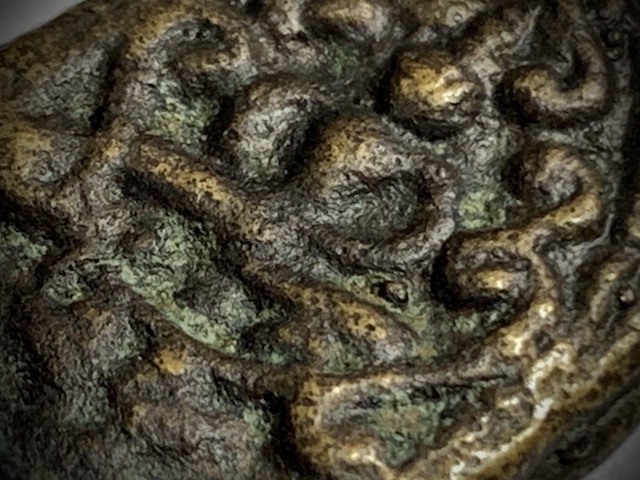 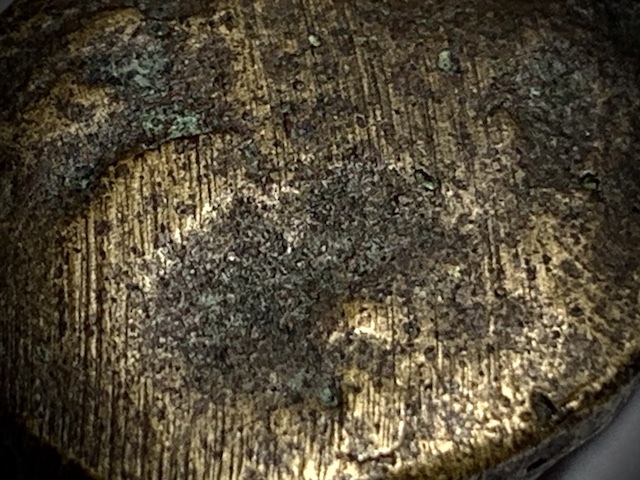 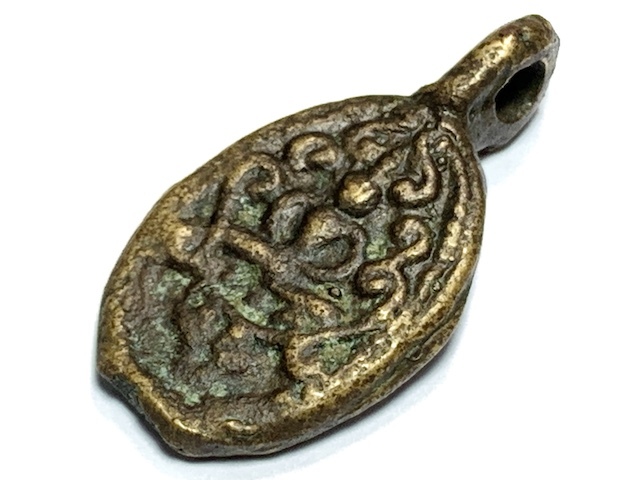 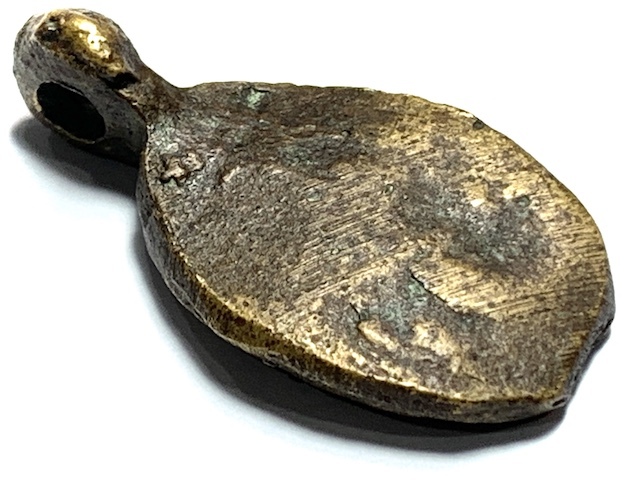 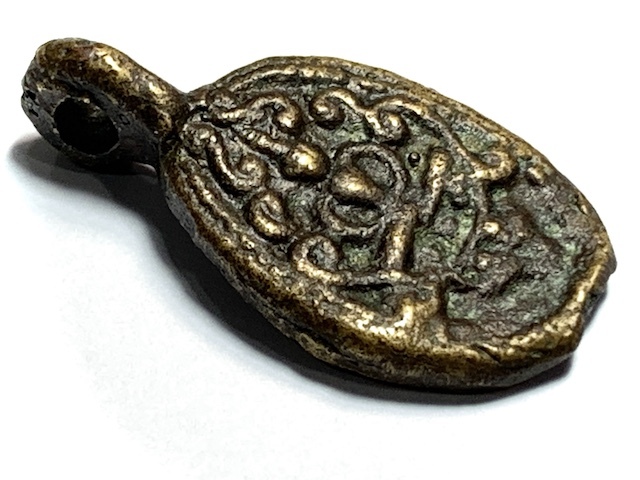 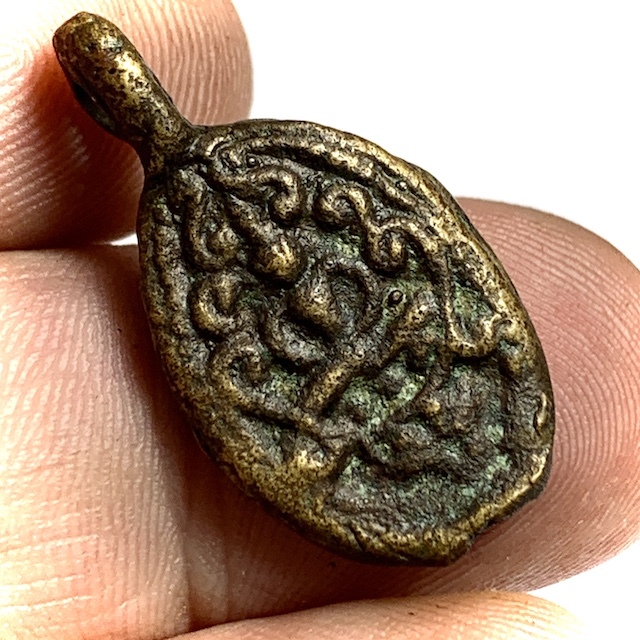 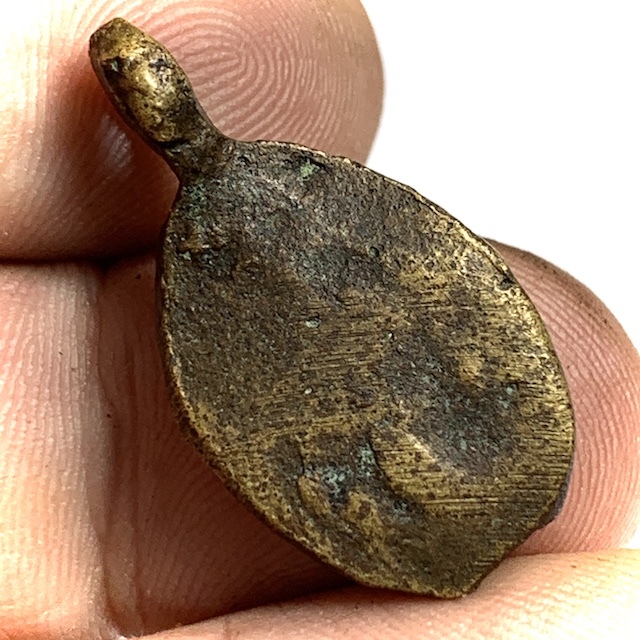 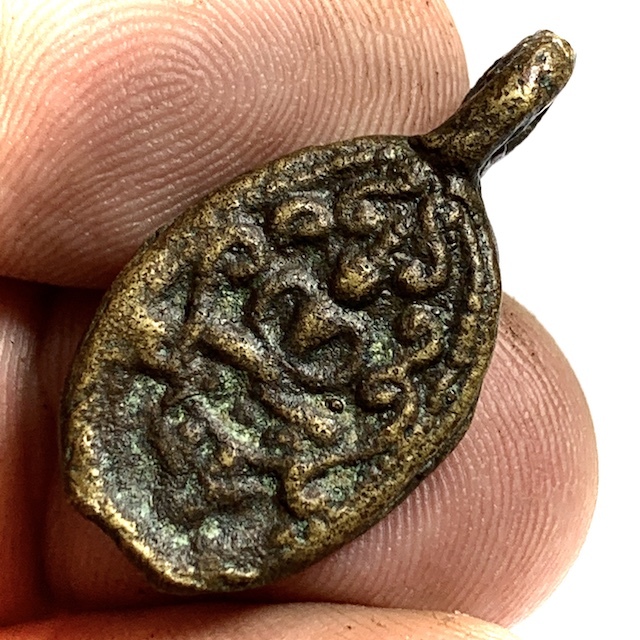 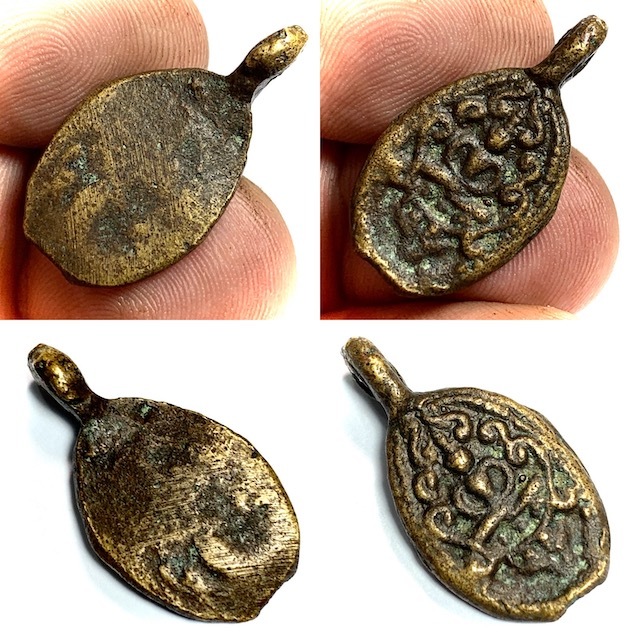